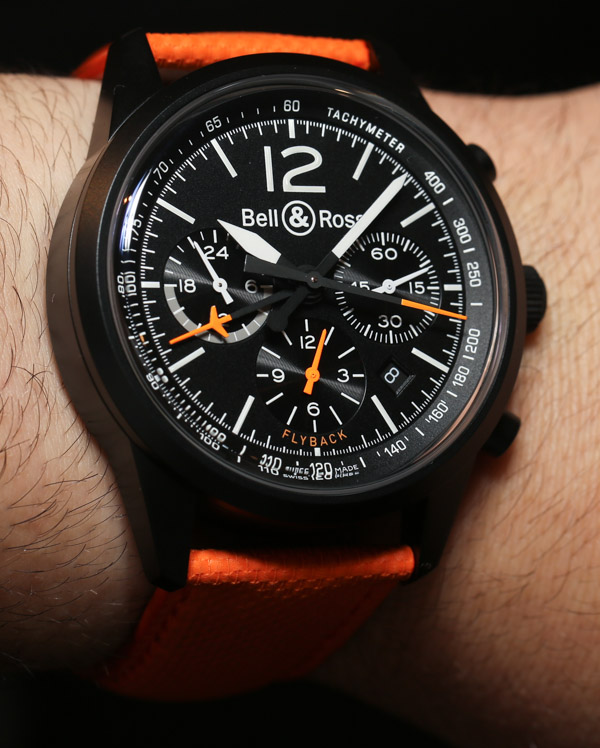 Bell & Ross had a strong collection of new watches for 2013 at Baselworld this year. My personal favorite model is the BR 126 Blackbird (UPDATE: Bell & Ross has officially changed the name of the watch to the “Bell & Ross BR 126 Flyback“), a limited edition model with a personality that is meant to honor the origin of Bell & Ross as a brand. At first glance, this watch might look like just another color variation in the BR 126 collection, but it is not that at all. Let’s first consider the beginnings of Bell & Ross back in the 1990s…

Bell & Ross watches were originally dual-branded Sinn timepieces that the founders of Bell & Ross felt could do very well in the larger fashion and luxury market as opposed to simply the dedicated professional watch market. German Sinn watches to this day is mostly setup as a direct-to-consumer tool watch brand producing some of the finest durable and professional use mechanical watches around. At that time in the 1990s, you basically needed to be in that world to even know about Sinn, as finding them in retailers was rare – especially outside of Europe. So Bell & Ross made a business model out of selling Sinn in places it had never before been. 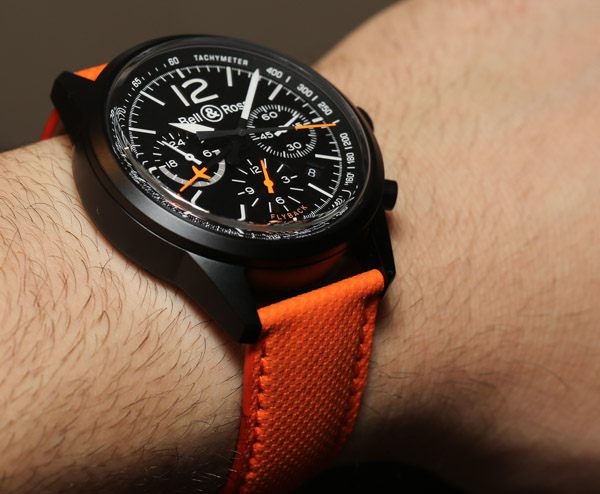 Later Bell & Ross began to produce its own designs, but even today the professional diver and aviation style borrowed from Sinn remains. Watches from the two brands today are quite distinct, but if you love Sinn you’ll probably love Bell & Ross, and vice versa. So getting back to the BR 126 Blackbird, it all focuses around a movement that honors the famous Lemania 5100 movement (no longer made today), that was in a lot of Sinn watches about 20 years ago (and of course before that as well). 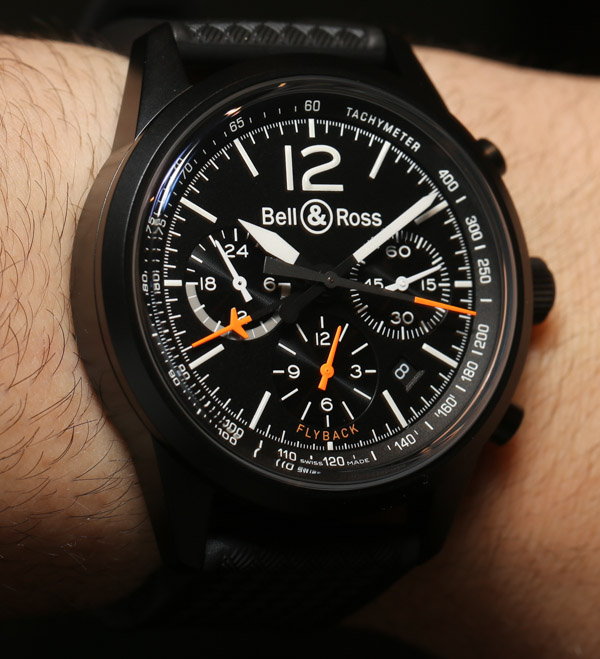 The Lemania 5100 layout sometimes looks like a Valjoux 7750 at first, but it is not. It featured central seconds and minute hands for the chronograph, and a 24 hour AM/PM indicator. The BR 126 Blackbird does not contain a Lemania, but it does contain a Swiss ETA 2892 with a special module produced by Dubois Depraz that recreates the functions of the famed Lemania. Thus, the Bell & Ross BR 126 Blackbird has orange colored central seconds and minutes hands for the chronograph, as well as an orange hand for the subsidiary hours counter. The other two subdials are for the AM/PM indicator and the seconds’ indicator. Unlike most BR 126 models, there is also a sloped flange ring around the dial (with tachymeter scale) that offers a more expansive look. You should also notice that the hour and minute hands are styled after the BR01 Heritage watches. Last, the chronograph has a flyback function – which is a nice little piece of icing on the cake. 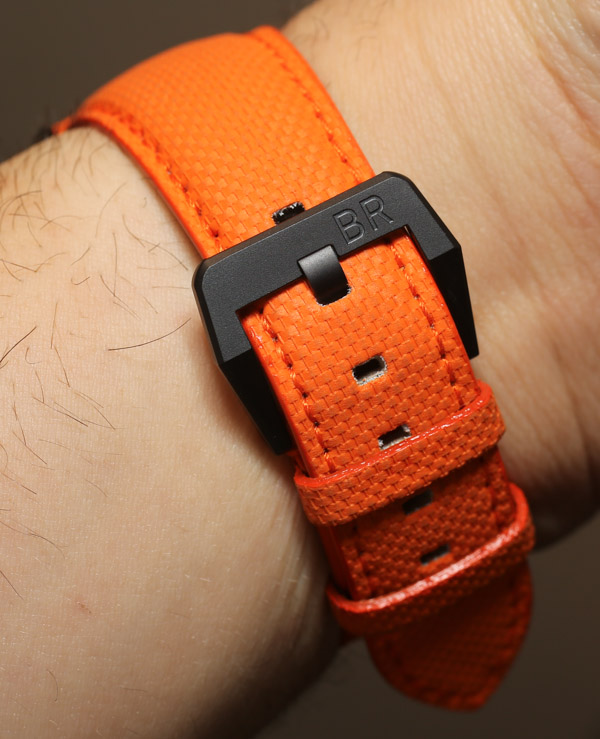 Most Bell & Ross BR 126 (reviewed here) models came in 41mm wide cases, but the BR 126 Blackbird has a 43mm wide case. This larger case size gives the watch a more impressive look, but doesn’t go so far as to make it a “huge” watch. Bell & Ross’ famed square BR01 watch at 46mm wide is great, but Bell & Ross reports that the smaller 42mm wide BR03 is a better seller. In a round case at 43mm wide, the BR 126 Blackbird will wear similarly. The matte black PVD case is simple and good looking, as should be the case in a tool-style watch. The BR 126 Blackbird is a thoroughly military style timepiece without glitz, but it does have a high level of refinement. This is a watch for every well-dressed pilot (or wants be pilot). 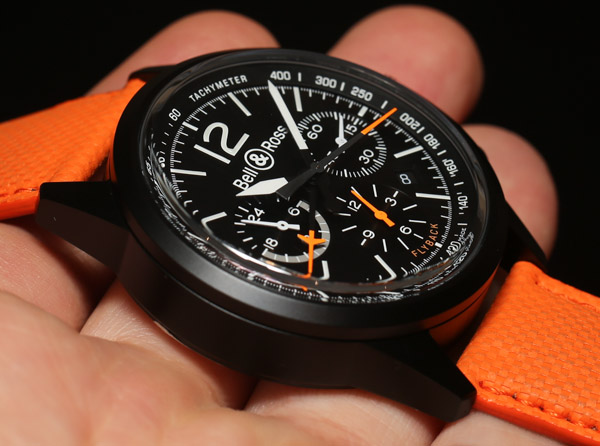 Bell & Ross will supply the BR 126 Blackbird with two straps, so you don’t need to choose between the orange canvas strap and the black rubber strap. No doubt the orange strap is cooler, and takes the design of the watch to a different level. Having said that, in the interest of wishing to be conservative once in a while, the textured black rubber strap is a good idea. I can also see the BR 126 Blackbird working well on a black alligator strap, and of course any number of NATO-style straps. 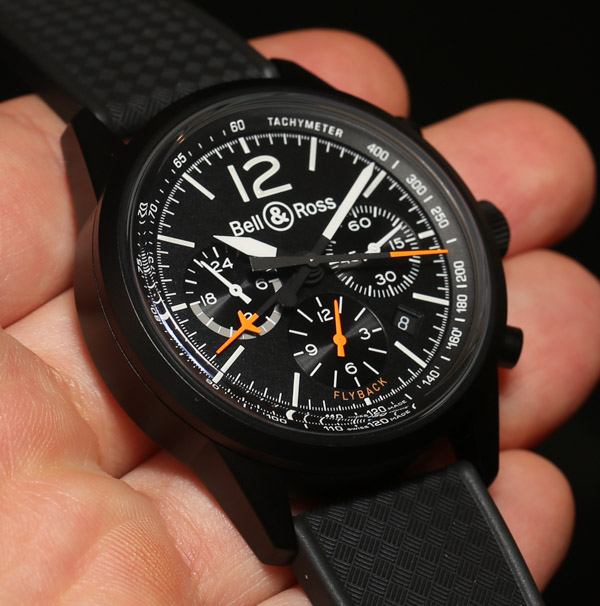 With a release date toward the end of 2013, the BR 126 Flyback will be a limited edition model – likely due to the fact that the movements are special order. Bell & Ross will produce the watch as a limited edition of 500 pieces with a price just under $7,000. 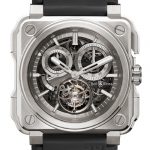