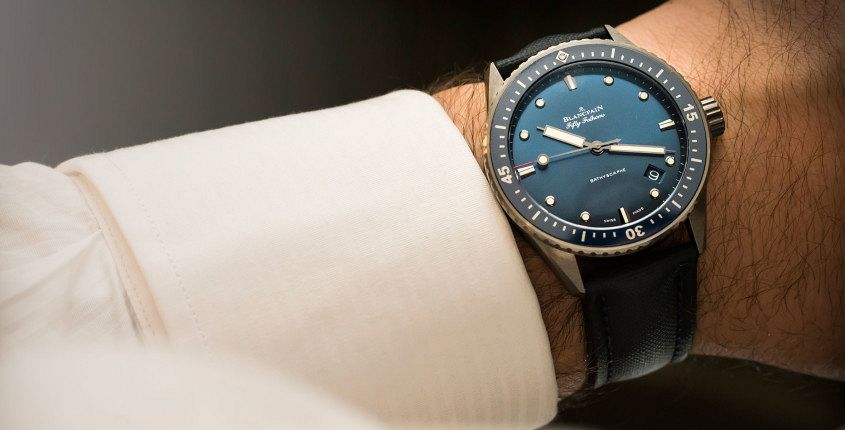 The original Fifty Fathoms wristwatch was one of those watches that helped to define the original, mid-20th century idiom of the modern dive watch: stainless steel case, timing bezel, simplicity in design with every other consideration subordinated to practicality (which is what you generally should do when you make something someone’s life might depend on). It’s common nowadays to say that the mechanical diver’s watch is obsolete, and unlike many commonly held views this one is actually partly true; the primary wrist instrument for marine exploration is the digital dive computer. However, depending on which diver you ask, an analog dive watch is a great backup, with mechanical movements often preferred for their non-reliance on a battery.

Blancpain are definitely on Santa’s nice list this year, for their serious efforts in ocean preservation. And by bringing a variant of an instant, but limited classic, into general production they’ll no doubt work their way back from naughty to nice in their fans’ eyes too. Last year they, and we, spent a lot of time talking about, and looking at hi-res pictures of, the Ocean Commitment Bathyscaphe Flyback Chronograph. There was something about the combination of gunmetal grey ceramic case and blue sunburst dial that just had us hooked.

Though I’d be comfortable betting heavily that the majority of diver’s watches will never dive, the non-divers who buy them do so for a reason, or reasons – among these, that they want something that has all the technical properties of a real diver’s watch, including toughness, reliability, accuracy, and of course, a no-frills style that says, I’m such a man’s man I can’t be bothered with style. Therefore, whatever else a diver’s watch has or does, we expect it to conform to what, to dive watch enthusiasts, is Holy Writ: that series of specifications known as ISO 6425, and its commandments.  There being many ways to skin a cat, however, manufacturers nowadays often start with the ISO and end up in an almost infinite number of different destinations.  The Fifty Fathoms Bathyscaphe Plasma Grey Ceramic is a Fifty Fathoms in name, but it’s a thoroughly modern dive watch in materials, design and execution.  What I was curious about was whether, being a Fifty Fathoms in name, it was, if not in physical details, a Fifty Fathoms in spirit as well.