With Baselworld 2017 only a few weeks away, it feels like the right opportunity to reflect on the fact that it’s been two years since we first saw the Carrera Heuer-01. Yes, it was March 2015 when the covers first came off the radical skeleton-dial design of the Heuer-01, introducing not only a new TAG Heuer look, but also a new name for the Calibre 1887 movement. We’d interviewed CEO Jean-Claude Biver a few weeks before the launch and he spoke of wanting to make sure that no-one would mistake the new chronograph for any other model in the Carrera range: mission accomplished. 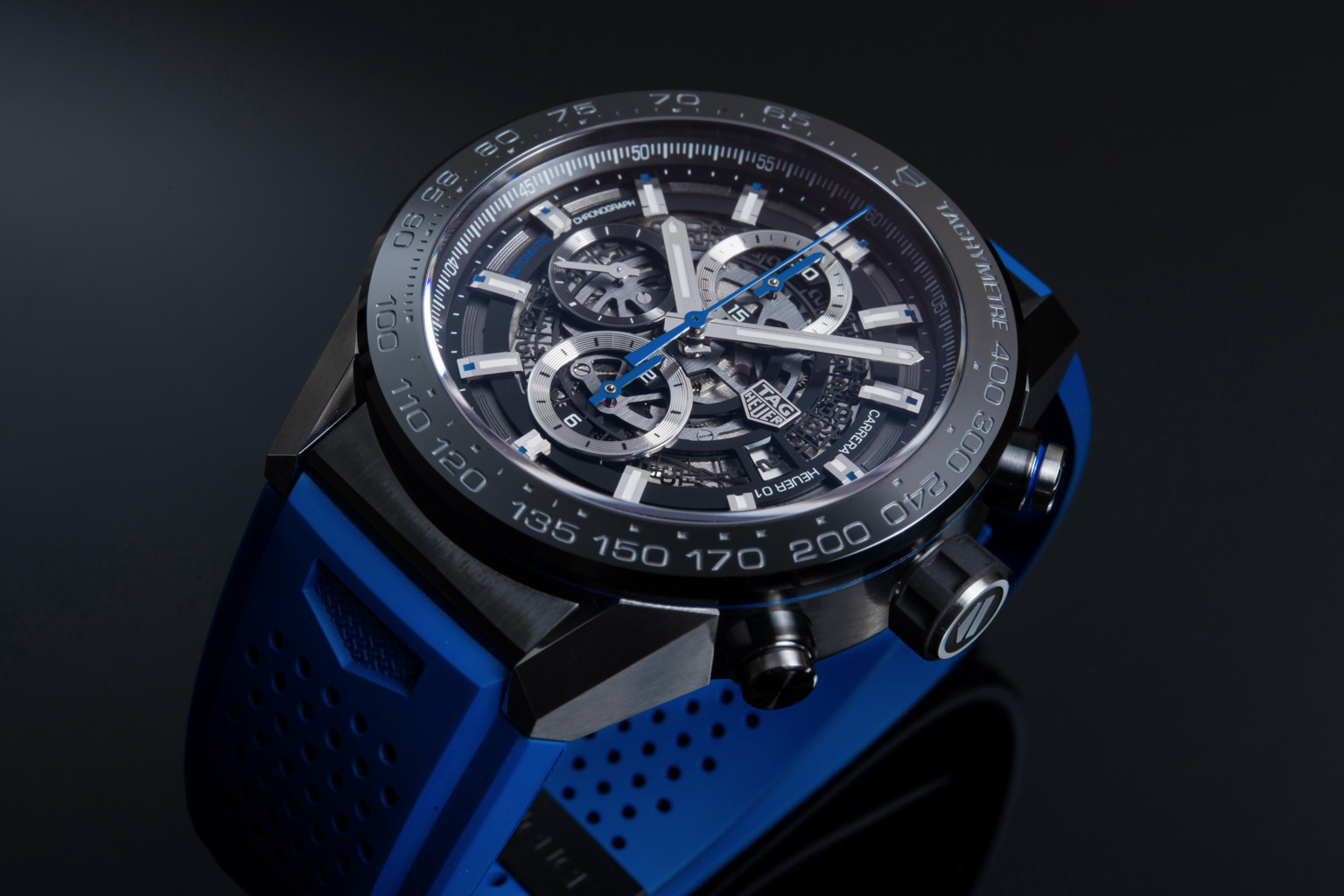 But the new Carrera didn’t meet with instant universal acclaim. Wasn’t the original 1963 Carrera all about legibility? Was the new model too large at 45mm? Was this simply a Hublot with a TAG Heuer badge?

Fast forward two years and the market at least has handed down its verdict: the Carrera Heuer-01 is now TAG Heuer’s top-selling model globally and played a significant role in the brand’s strong growth in 2016. We saw new 45mm models added to the range at Baselworld 2016 along with a 43mm Carrera Heuer-01 range. And we don’t expect the expansion to stop there, with more new 45mm models due at Baselworld 2017.

And so, two years after we reviewed the first prototype, we were inspired by these great photos of the Blue Touch Edition Carrera Heuer-01 to revisit the series and see whether those first reactions from 2015 still ring true. 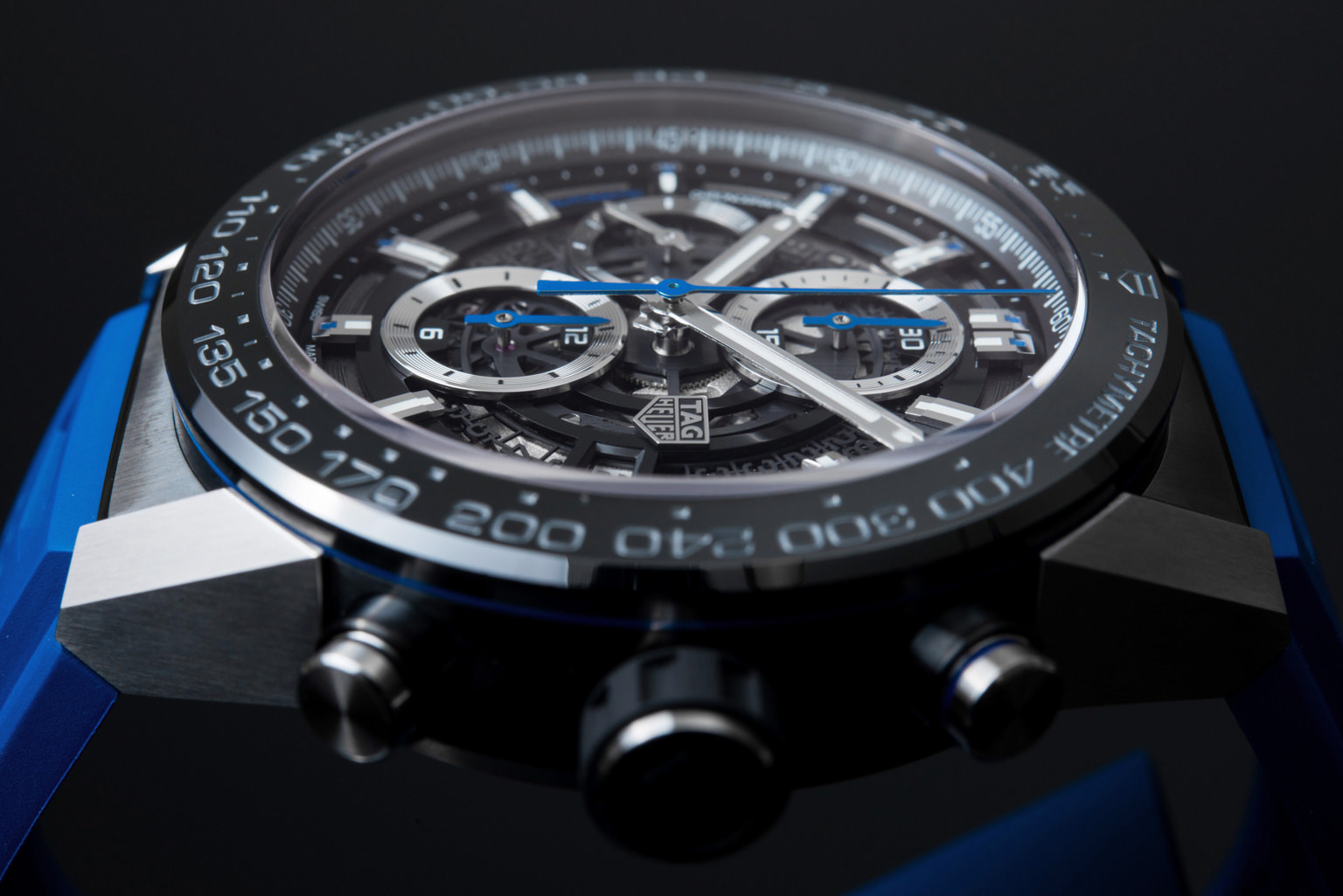 The Heuer-01 modular case offers a modern, square-edged take on the traditional Carrera lug, and manages to tread that fine line between modernising the look without totally losing touch with the historical design of the Carrera series. The Blue Touch Edition launched last year is the only variation of the original Titanium & Steel model to swap out the red highlights for blue, which gives this model its own distinct look. 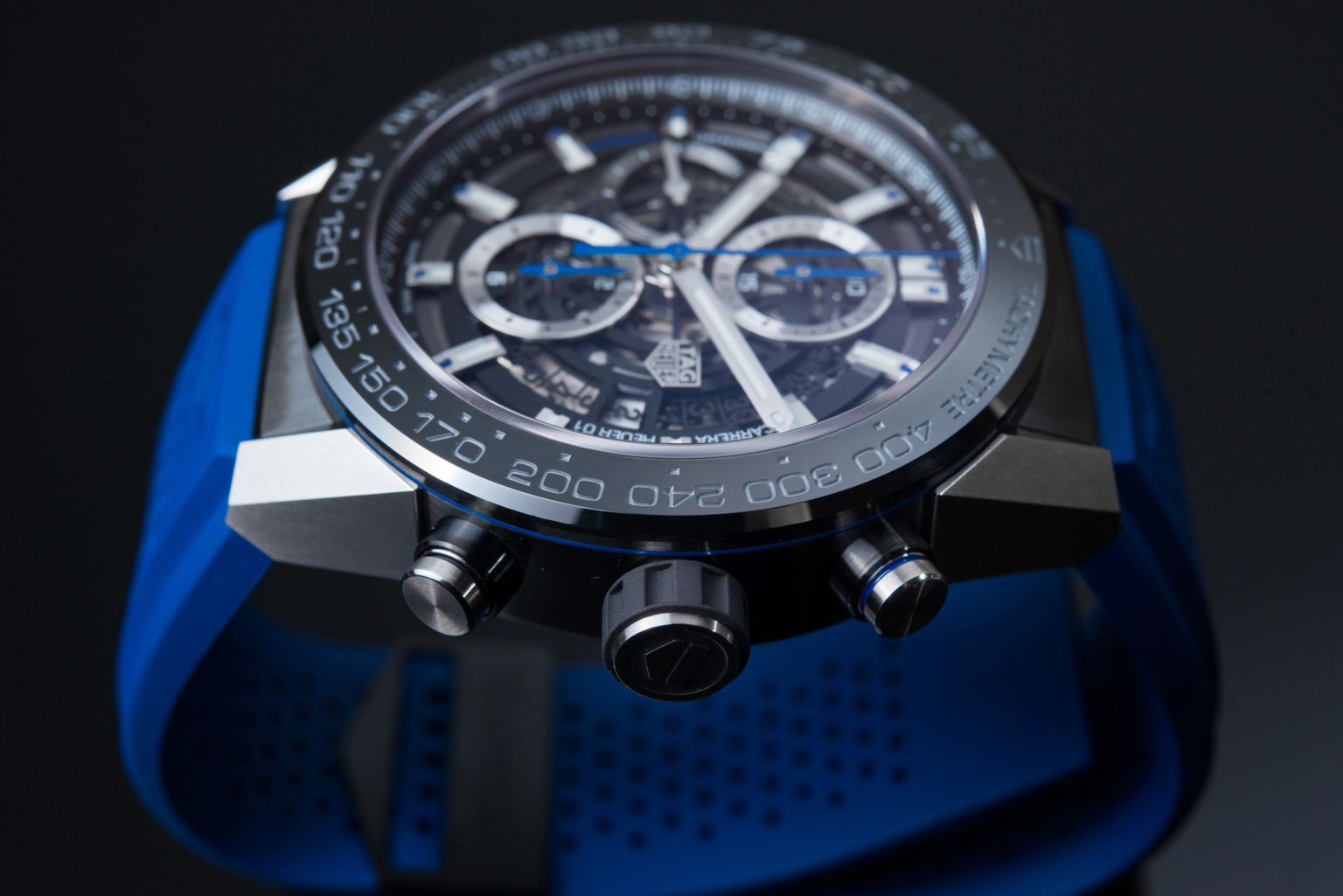 However given the benefits of the modular case construction, we’d like to see this version of the Carrera with titanium carbide-coated lugs to match the centre case and end-piece rather than remaining in contrasting polished steel. Alternatively, the entire case could have been finished in polished and brushed steel and avoid the titanium-carbide black coating all together.

Applying the blackened finish across the entire case may well push up the price, but it would give the Blue Touch Edition an even great point of difference from the other models. 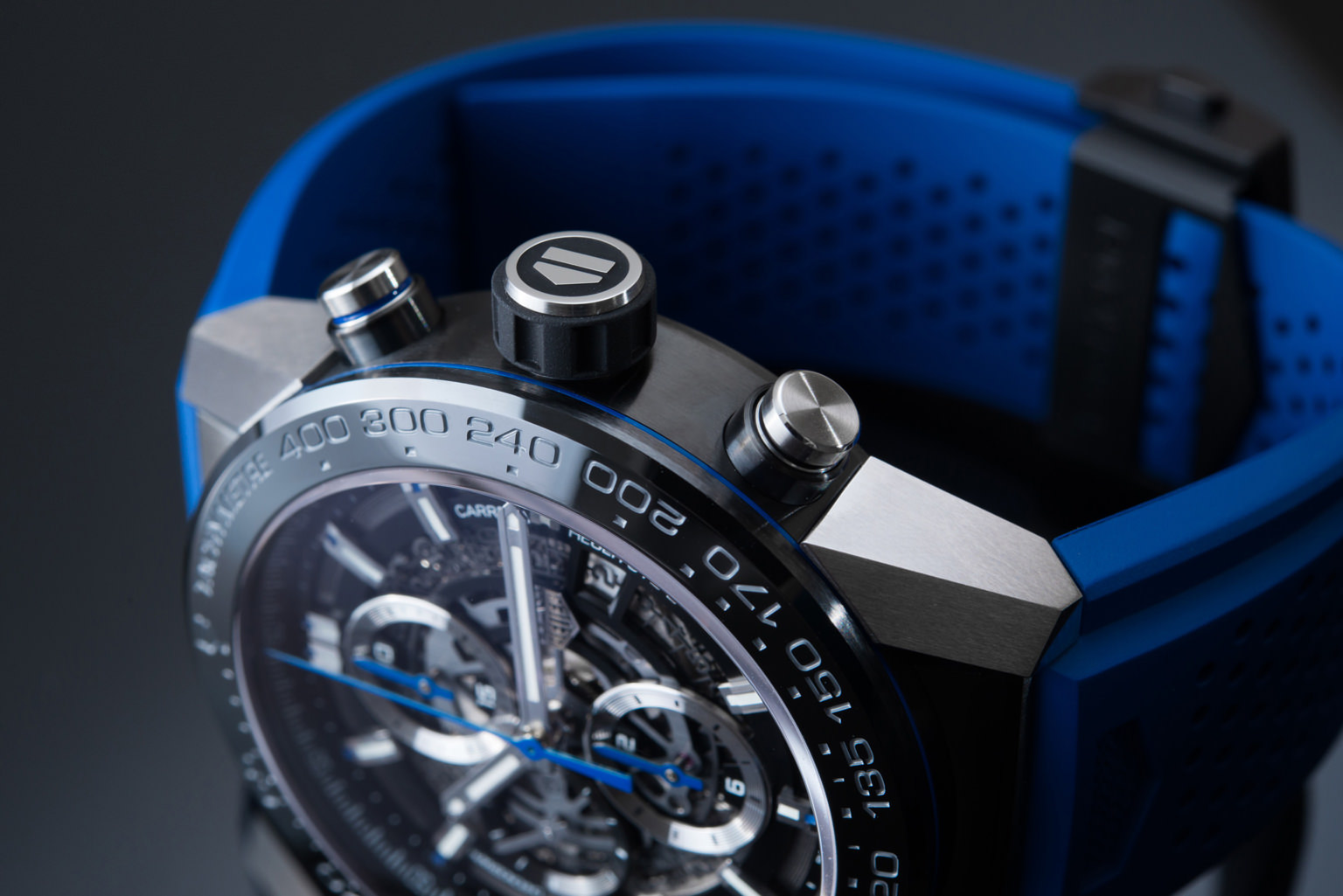 Overall, we think the case design looks as fresh now as it did two years ago. As we’ve seen the Heuer-01 range expand into Ceramic, Titanium and Rose Gold models, as well as with the range of 43mm models, the design has proved its flexibility. 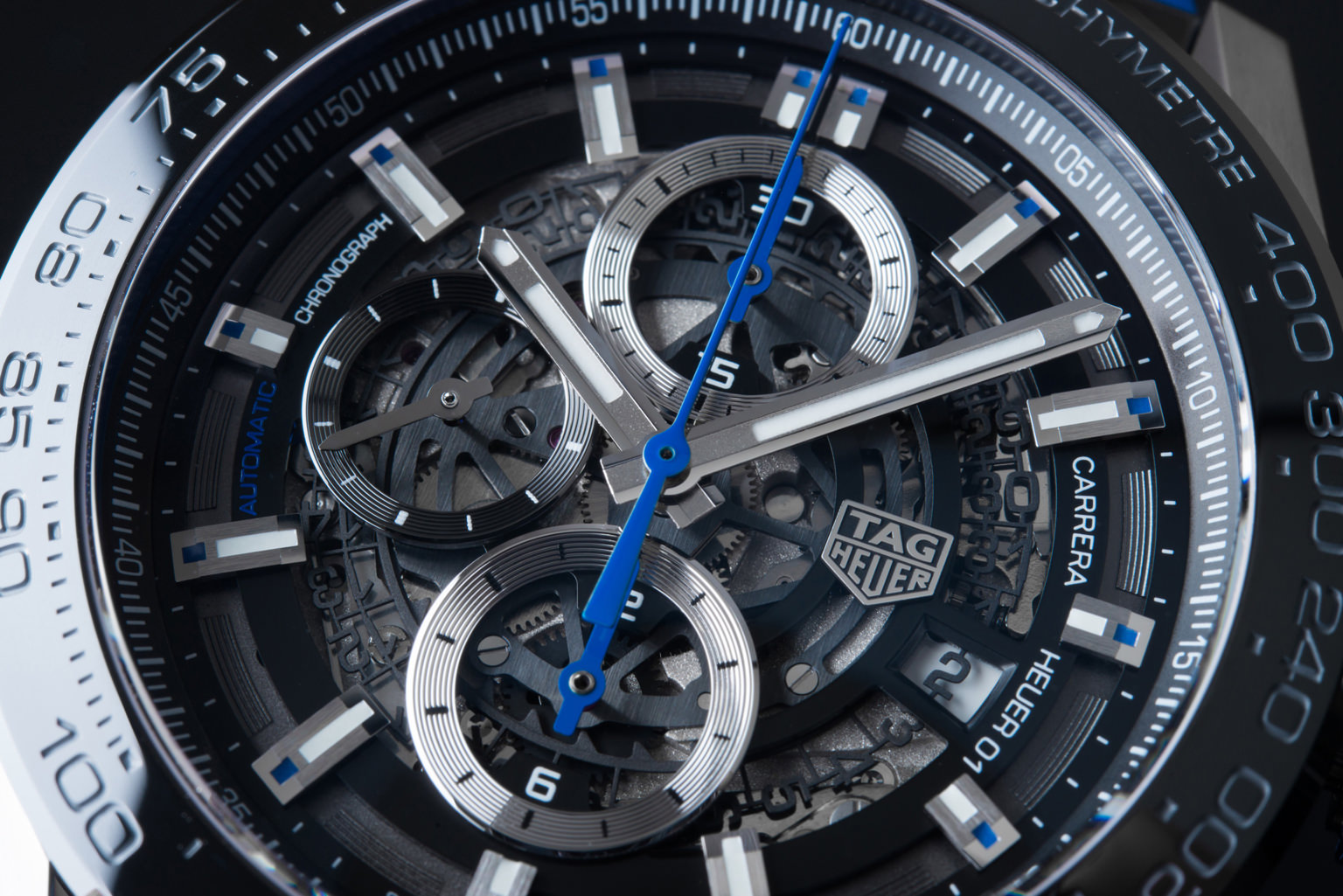 The skeleton dial was the most controversial feature of the new Heuer-01. The final model offered two key changes to the prototype aimed at improving legibility:  moving the TAG Heuer logo from being etched on the crystal to the movement itself and secondly the addition of a white backing to the date window at 3.30 to give the date (a little) more prominence.

The Blue Touch Edition offers blue highlights on the hour-markers, but we think that the changes could have gone further. For example, perhaps the finishing of the 9 o’clock register could have been changed to bring it into line with the polished finish of the 12 and 6 o’clock registers. Maybe the minuterie inner-flange could have been white on the “Blue Touch” Carrera to set it further apart. 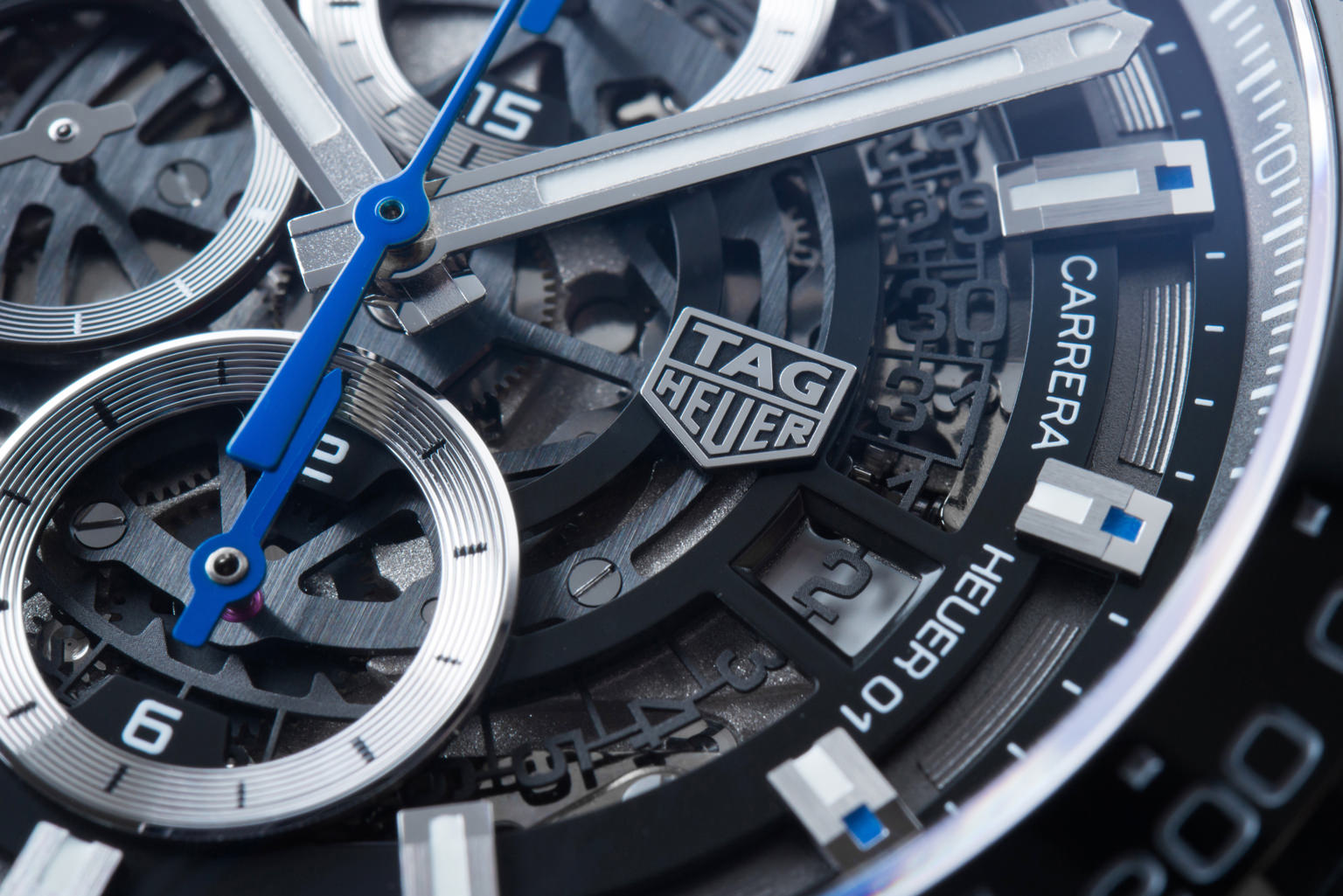 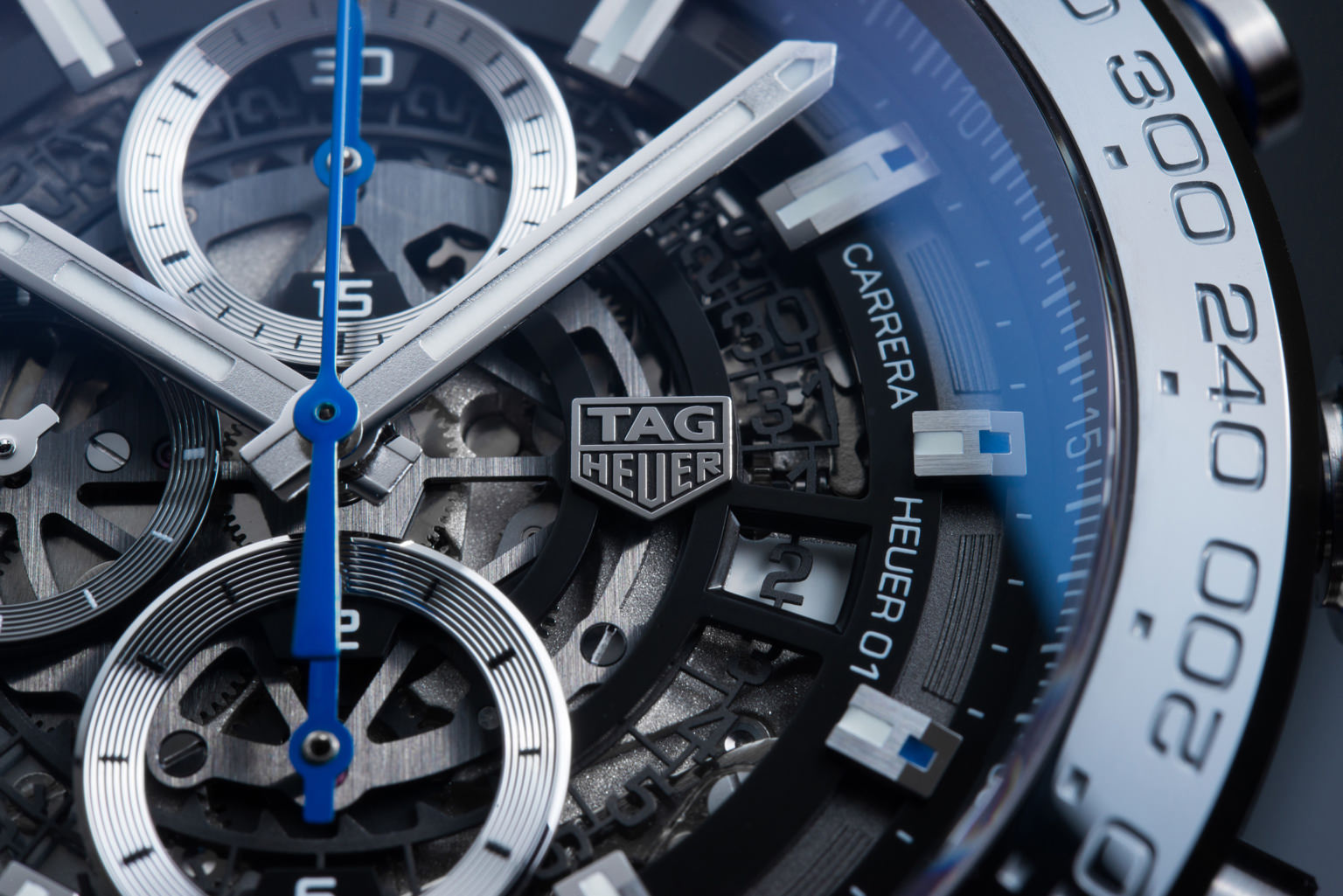 The benefit of the skeleton dial is the high perceived value, but this does come at the cost of legibility. There’s no doubting that the Carrera looks like a watch that costs a lot more than $5000, and that’s in large part thanks to the skeleton dial. But for us one thing that hasn’t changed over the two years is our preference for a normal dial (as featured with the 43mm Heuer-01), even though it may not look as premium and technical. There’s nothing like it for the same price.

But the skeleton dial will never be as easy to read as a conventional dial, especially at a glance, and this feeling certainly hasn’t changed from our first review. 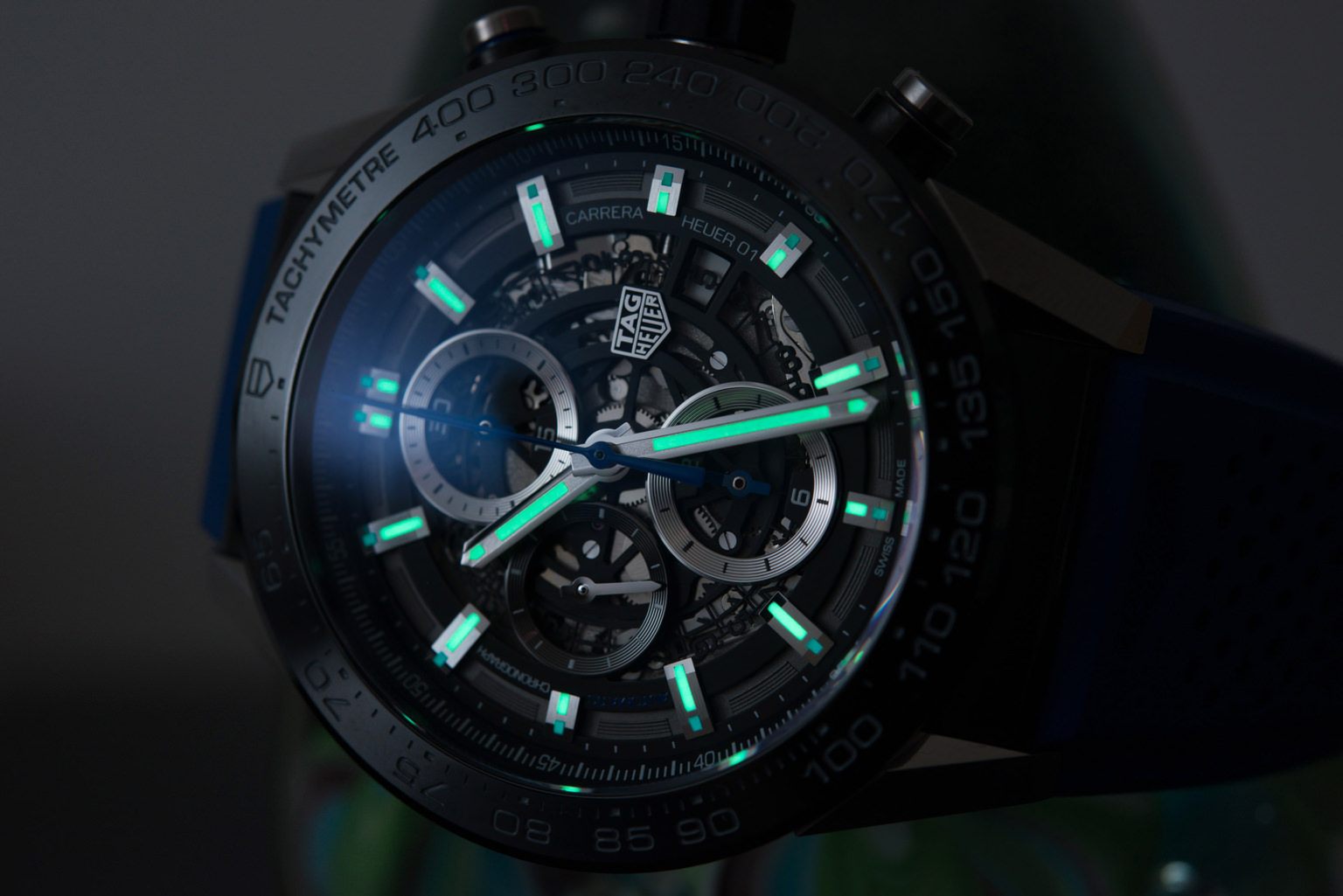 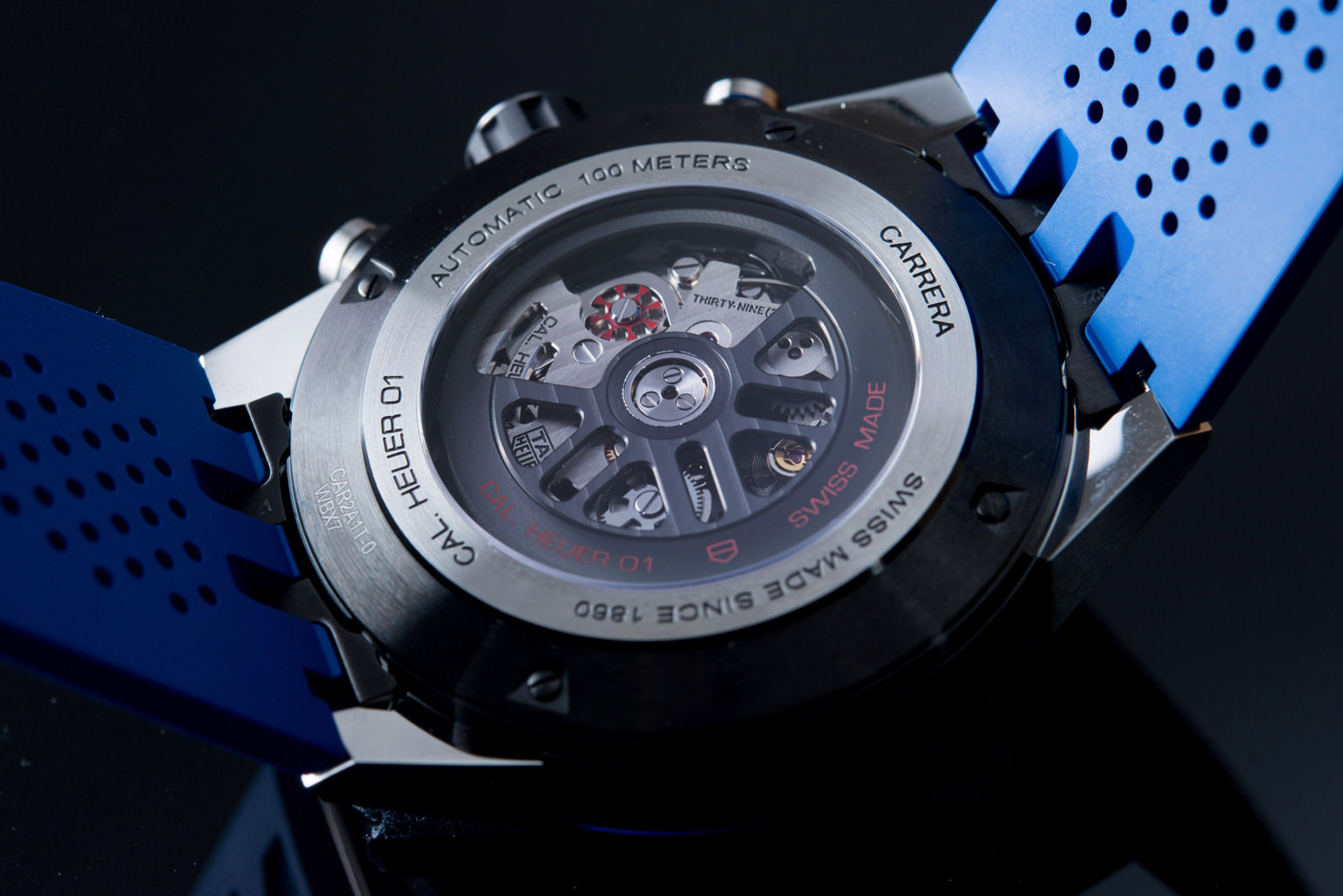 With the Calibre 1887/ Heuer-01 now heading into its seventh year of production, there are no surprises with the reliability or accuracy of the calibre, with it being at least on par with the ETA-sourced movements that powered the TAG Heuer Carrera range from the mid-2000s. 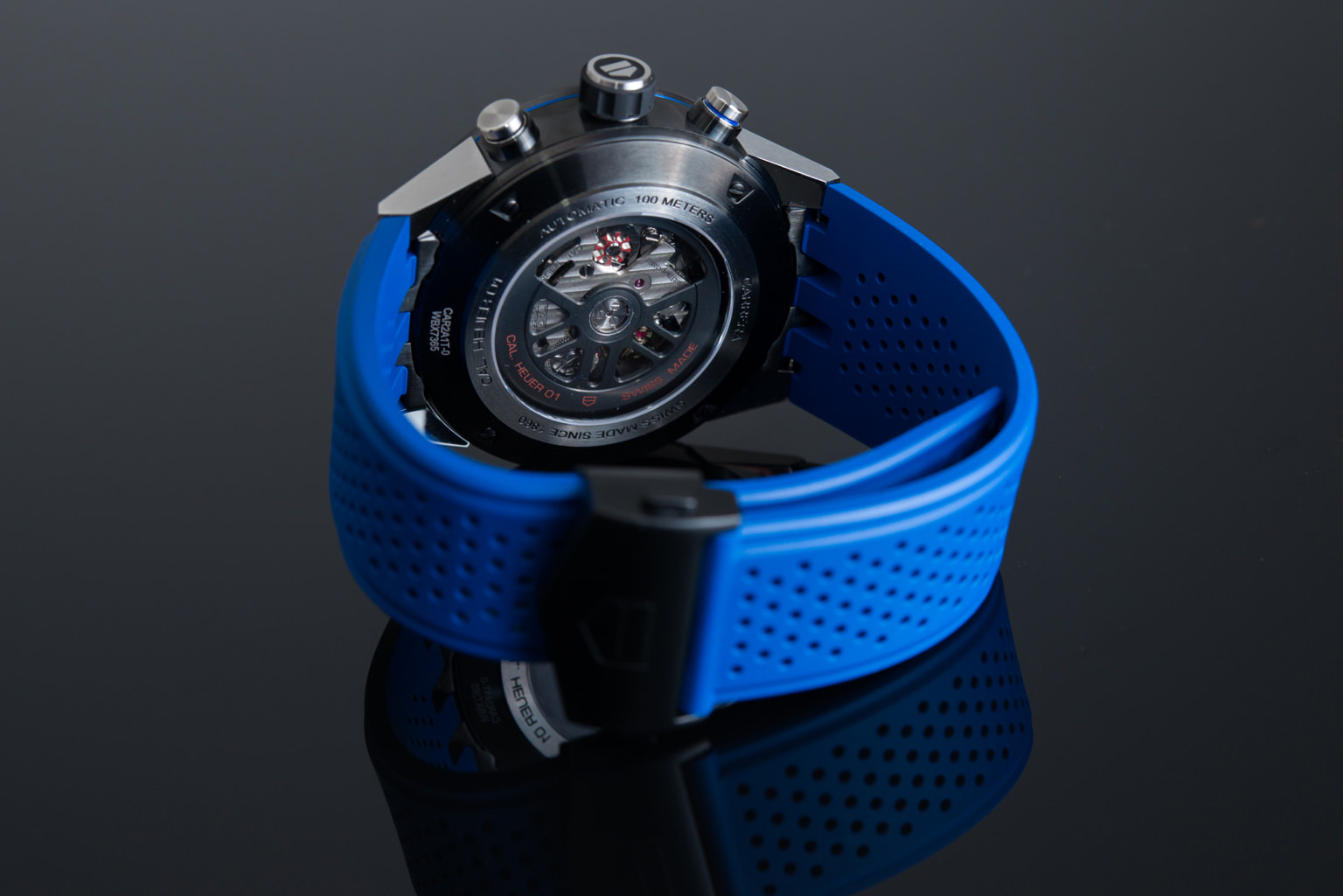 Again if we had to make a change, we’d love to see a blue column wheel and text in place of the standard Heuer-01 red to match the rest of the design, but again we come back to the tradeoff of cost versus the bespoke qualities of this model. 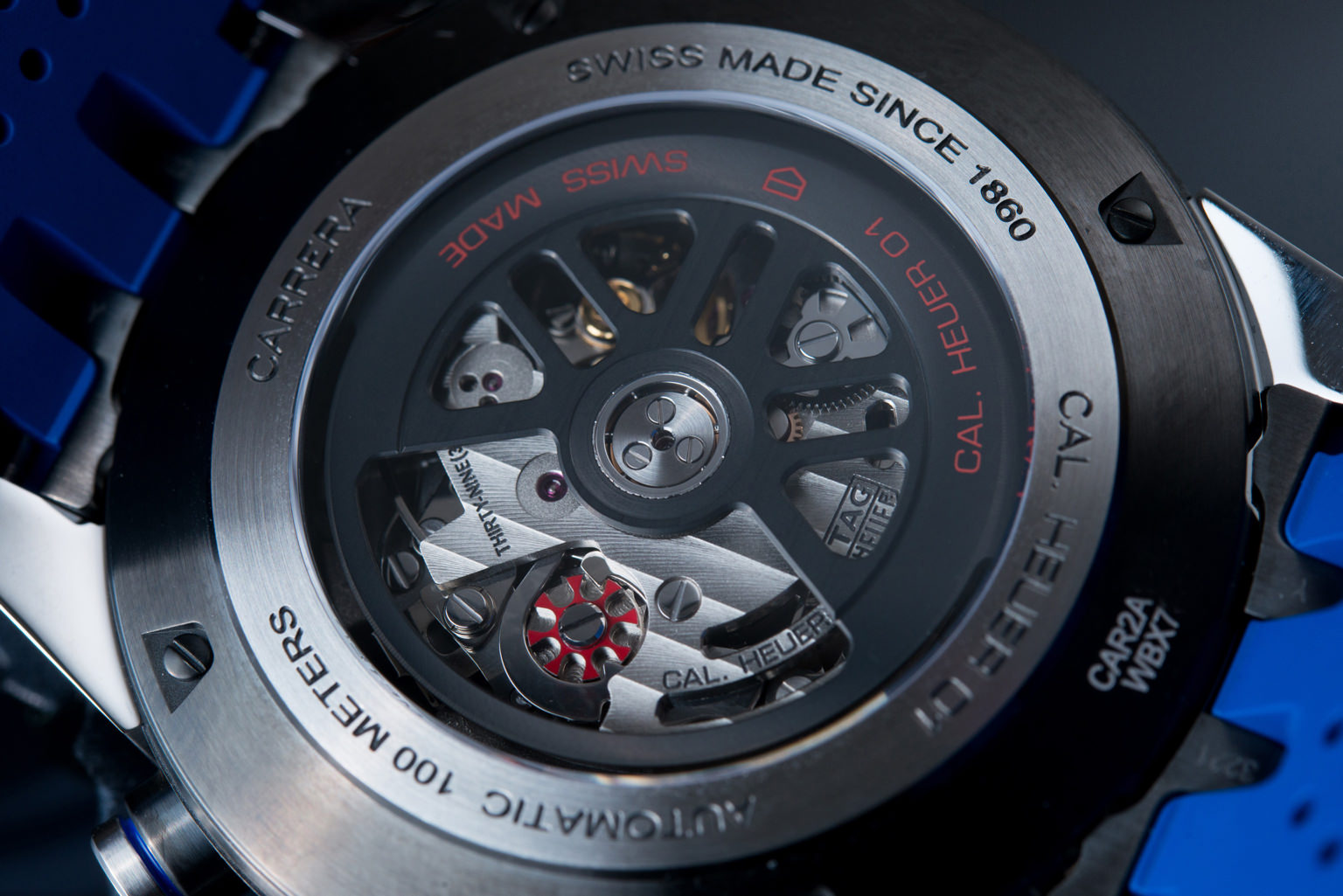 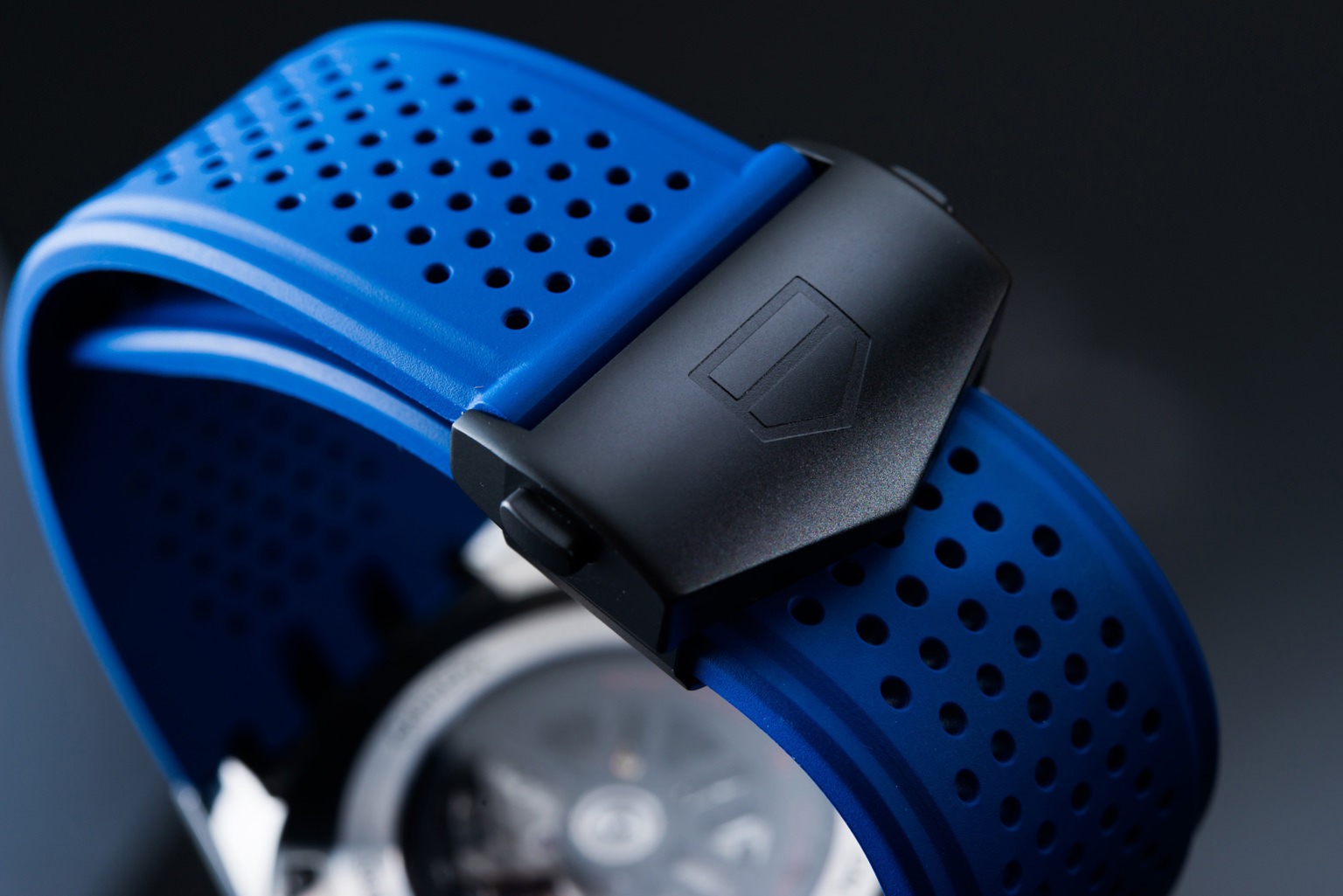 On launch the rubber strap you see here (albeit in black) was the only tethering option for the Carrera Heuer-01, but two years on we now have a bracelet option on some models as well as a brown-leather strap. Speaking of leather, we understand that a “ridge-back” leather strap in multiple colours and finishes will be joining the range in 2017. 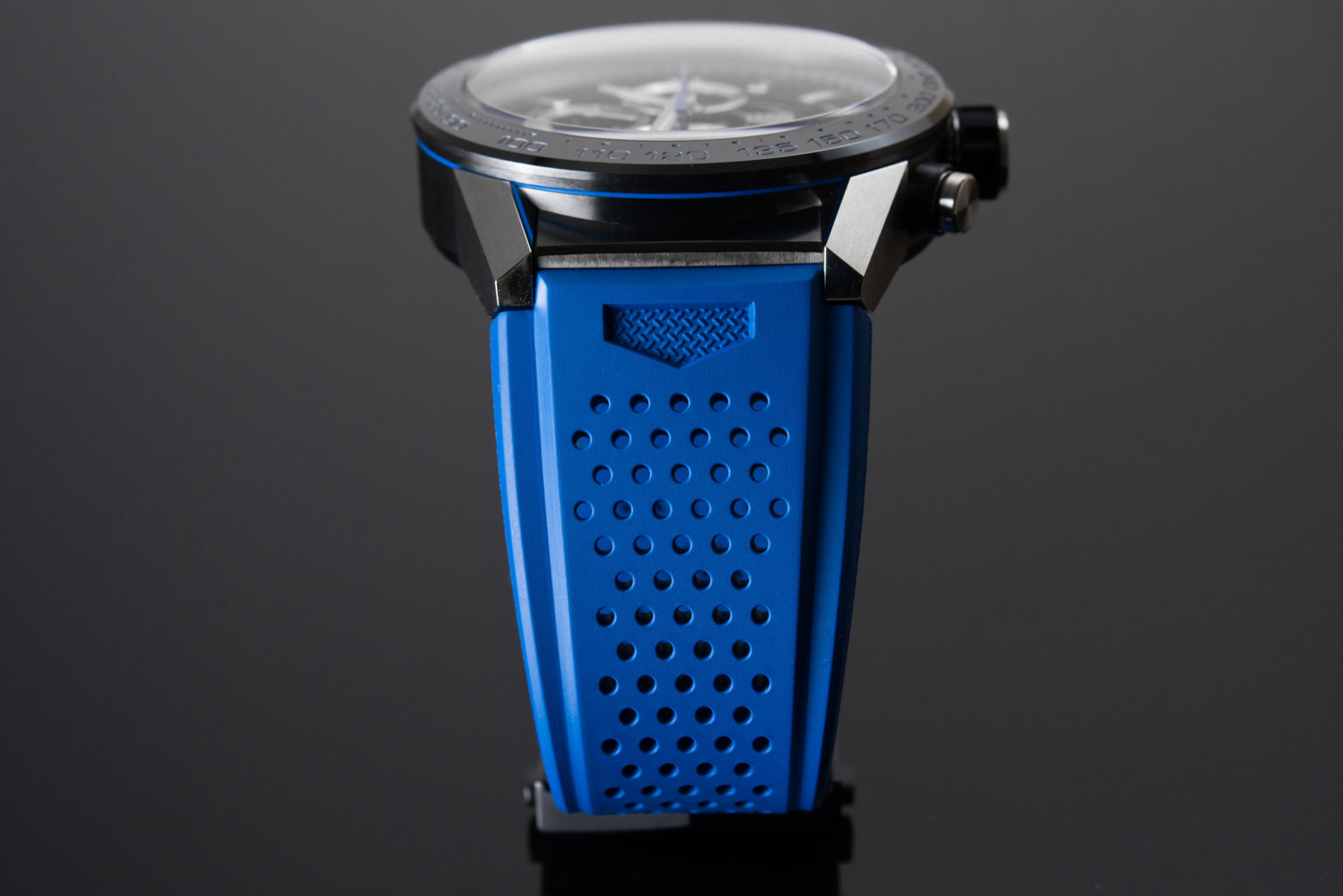 But while it will be great to have more options, nothing has changed our view that the rubber strap looks and feels great- and importantly, is the right fit for the technical design of the watch. This blue strap in particular has a great sporty look. 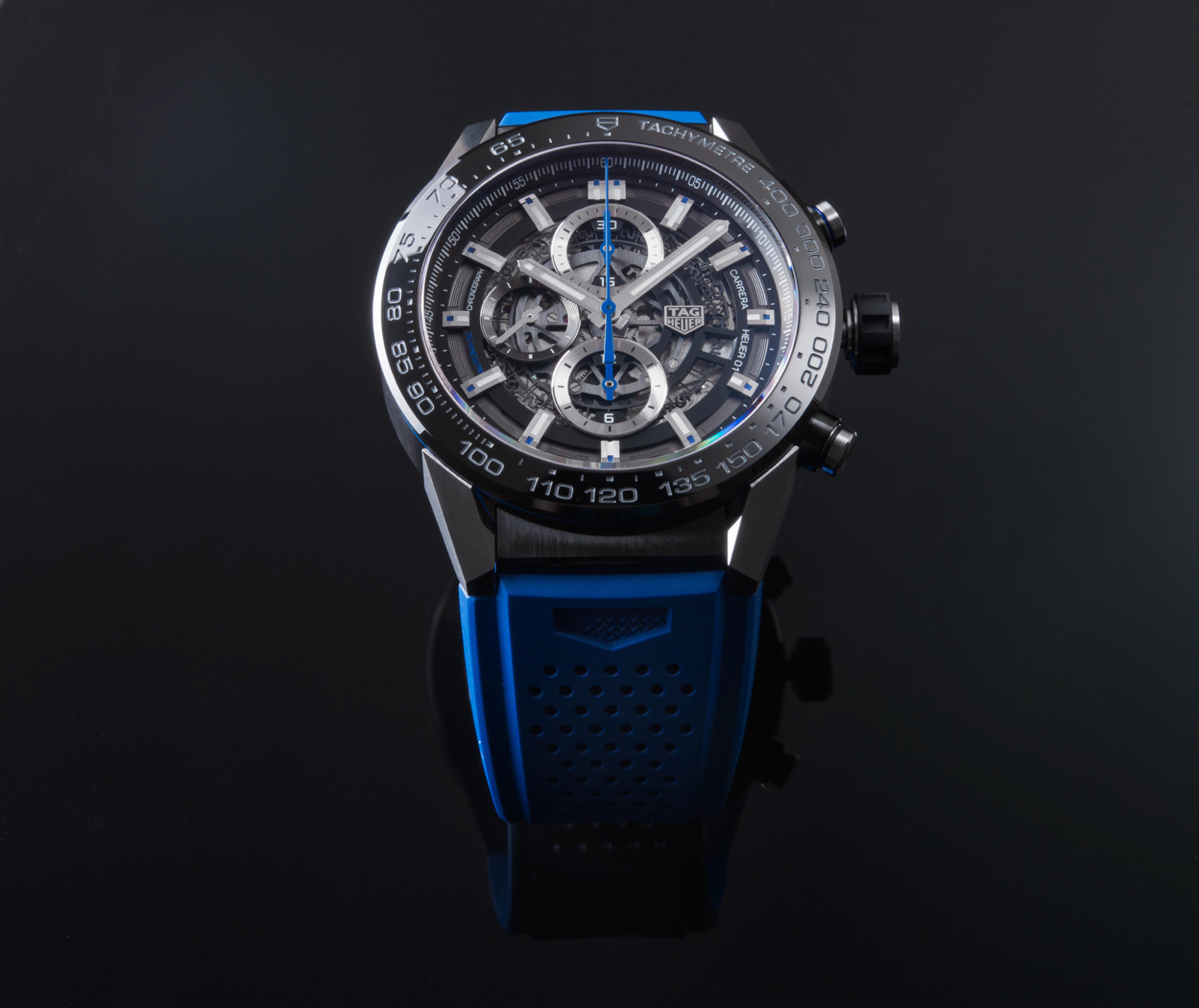 Despite the passage of two years, the Carrera Heuer-01 still looks fresh and modern, with the look cascading across the range to the Carrera Heuer-02T and the smaller, more conventional 43mm Heuer-01 range. In particular, we think the Blue Touch Edition looks fantastic- sporty and worth considerably more than its US$5,300 price. As we’ve mentioned in several places during this review, we think that even more changes could be made to the Blue Touch Edition, even at the cost of a higher price. Even at say $6,000 we still see value in this model.

But if the design and modular concept of the Carrera Heuer-01 has been so successful, why wouldn’t the Aquaracer follow the same path? Why wouldn’t we see an Aquaracer Heuer-01 priced at a premium to the Calibre 16 models? We’ve speculated about the expansion of the Calibre 1887/ Heuer-01 outside the Carrera range for sometime, but it’s yet to occur. We hope that 2017 is the year when the looks and thinking behind the Carrera Heuer-01 expands across other models in the TAG Heuer range.

All photos thanks to @watchestolove