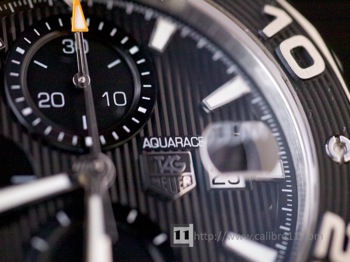 The Calibre 5 Aquaracer 500m was launched at Basel in 2009 and represented a significant step-up in size and style for the Aquaracer series, with its vertically textured dial, distinctive rubber bezel with applied markers, helium-escape valve and “cyclops” sitting over the date at 9 o’clock.

The new model Aquaracer Chronograph builds on this style-template, but adding Chronograph dials in the traditional Valjoux 7750-layout (12, 6 and 9).

Given TAG Heuer’s heritage in diver watches, and as a previous owner of an Omega Planet Ocean (45.5mm), I was keen to try the new Chronograph to see if it’s a worthy successor to my old quartz diver from the 1980s

The Aquaracer series traces it origins back to 1982 when Heuer released the 2000 series. By 1982 the Heuer 1000 series was a big success for Heuer, especially in Japan, however its success presented a dilemma for Heuer. Heuer’s reputation was built on mechanical watches with Chronograph functions- but the 1000 series was neither a Chronograph nor a mechanical watch. The 2000 series addressed this by giving Heuer a quartz-Chronograph in the popular diving-watch style, and the series was initially marketed by Heuer as the “Chrono-Quartz” series.

Take a look at the photo below from the 1983 Heuer catalogue and you see several design features that TAG Heuer use on today’s Aquaracer 500m Chronograph- same sub-dial layout, date at 3 o’clock with a cyclops and rotating diver bezel. 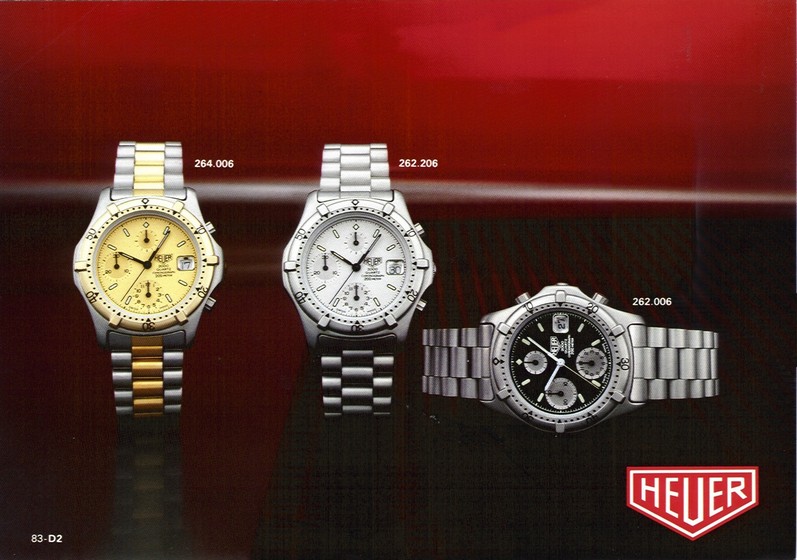 At 44mm, the Aquaracer 500m Chronograph is the largest watch in the Aquaracer range, just as the 1983 Heuer 1000m Diver watch of the 1980s was the jumbo-version of the 1000 series- yet take a look below at how the 1000m diver is positively dwarfed by the new model. 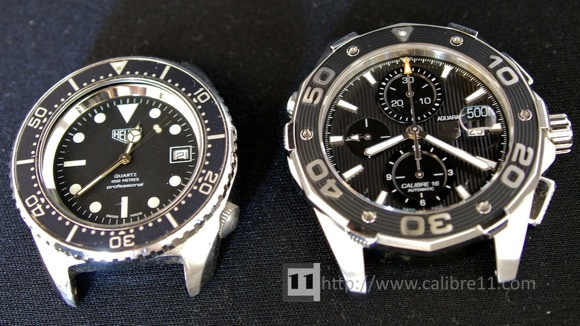 The Aquaracer 500m Chronograph is powered by the familiar Valjoux/ ETA 7750 movement, which TAG Heuer call the Calibre 16. The 12-6-9 layout of the Calibre 16 dictates the placement of the registers on the dial and clearly the challenge here has been to fit everything on the dial. The dial layout becomes a little busy towards the 3 0’clock mark, trying to accommodate a date window, a cyclops, the TAG Heuer logo and the model name all within a pretty small corner of the dial. 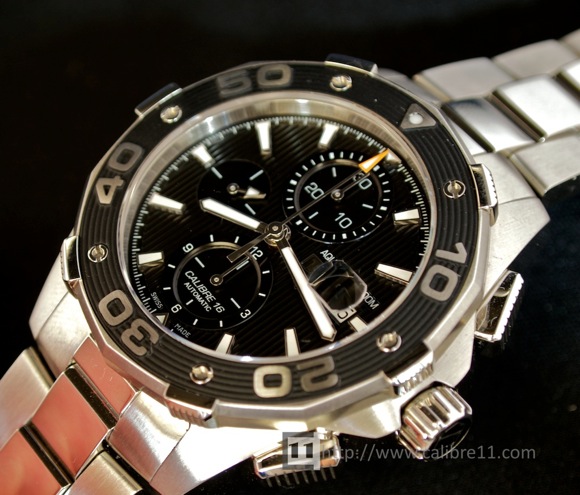