Considering that TAG Heuer had not designed or made its own mainstream movement since the early 1980s, the simultaneous announcement of the Calibre 360 and Calibre S movements at Baselworld 2005 was a landmark event for the company. Both movements were ambitious and complex- one, the world’s first 1/ 100th second mechanical chronograph (Calibre 360) and the other an electro-mechanical chronograph that set out to redefine the readability of complications- the Calibre S. While the Calibre 360 was offered only in a limited edition Carrera, the Calibre S has been extensively used across the TAG Heuer’s range as the brand’s flagship quartz movement.

Despite seven years having passed since its launch, the Calibre S remains somewhat of a mystery today; a movement that is neither fish nor fowl. 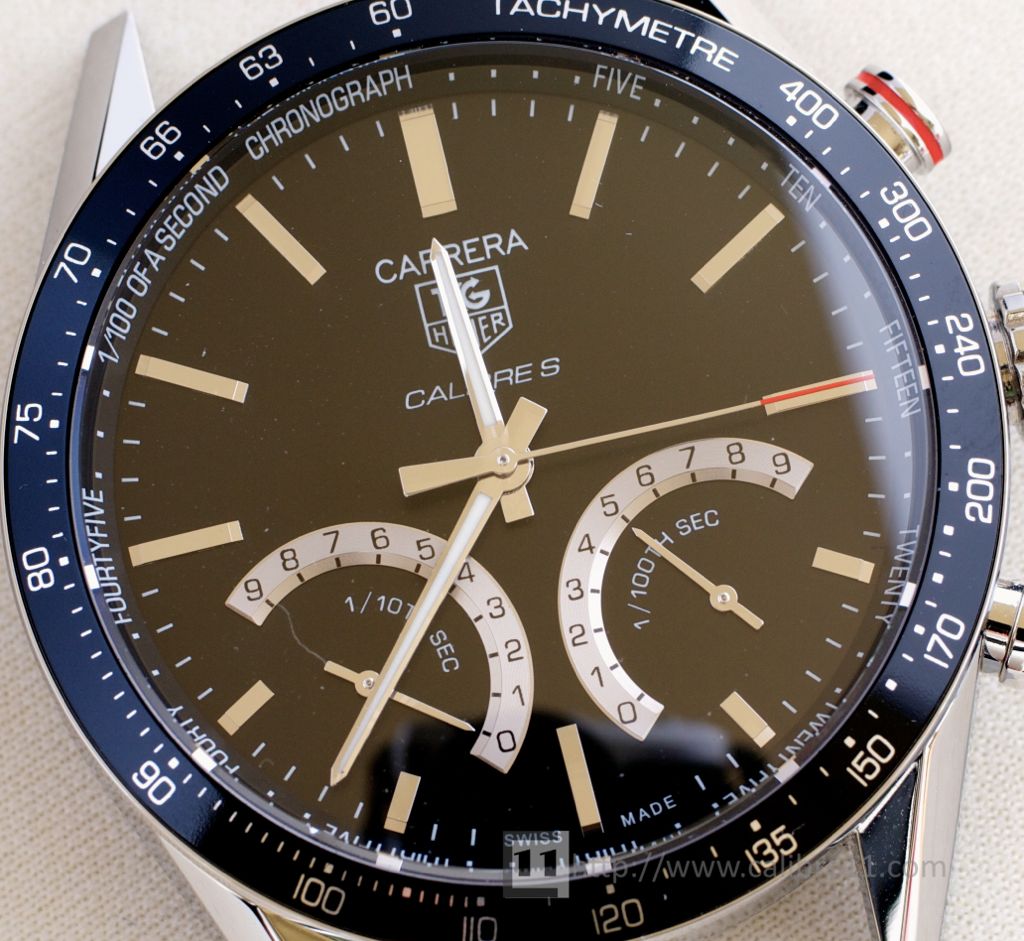 For this review, we’ll look at one of the watches powered by the hybrid movement- the TAG Heuer Carrera Calibre S. While today’s Carrera range has more than a dozen distinct models using six mechanical movements, this model is the only quartz Carrera you can buy. 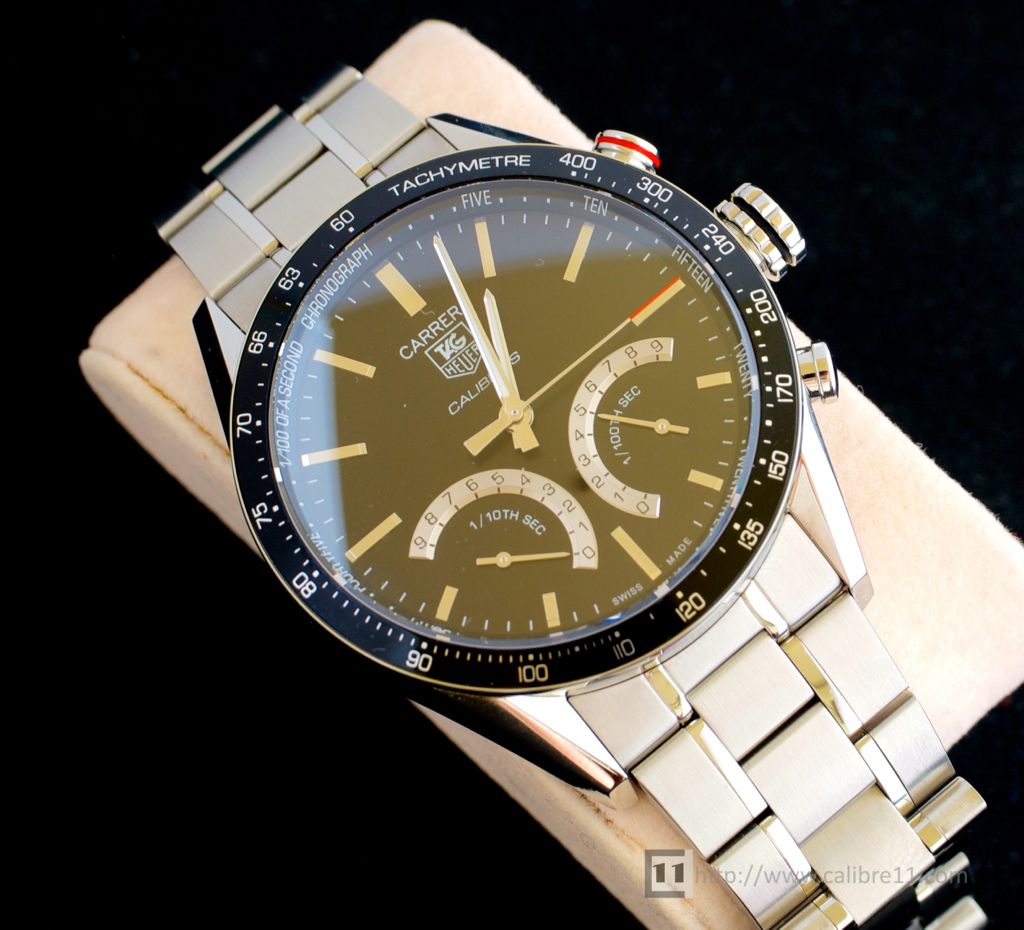 The Carrera Calibre S shares much of its design with the Carrera Day-Date Calibre 16- with both watches being housed in an over-sized 43mm stainless steel case. Other shared features include  the large “double-crown”, red-ringed top chronograph pusher and the red-tip central chronograph hand.

Where the two watches diverge is the depth of the case. As you see below, the quartz movement in the Calibre S Carrera (below right) allows for a slimmer- and lighter- case than its mechanical cousin.

While the Carrera Calibre S case is not unique in the Carrera range, the dial is. The signature elements of watches using the Calibre S movement are the two semi-circular, 160 degree sub-dials at 4.30 and 7.30, which replace the traditional circular registers. Since 2005 the Calibre S has been available in the SLR, Formula 1, Aquaracer, Link and Carrera variants- with all Calibre S models featuring the same semi-circular sub-dials. It can sometimes to hard to work out which movement is used in a watch without reading the script on the dial, but the Calibre S watches are easy to identify. 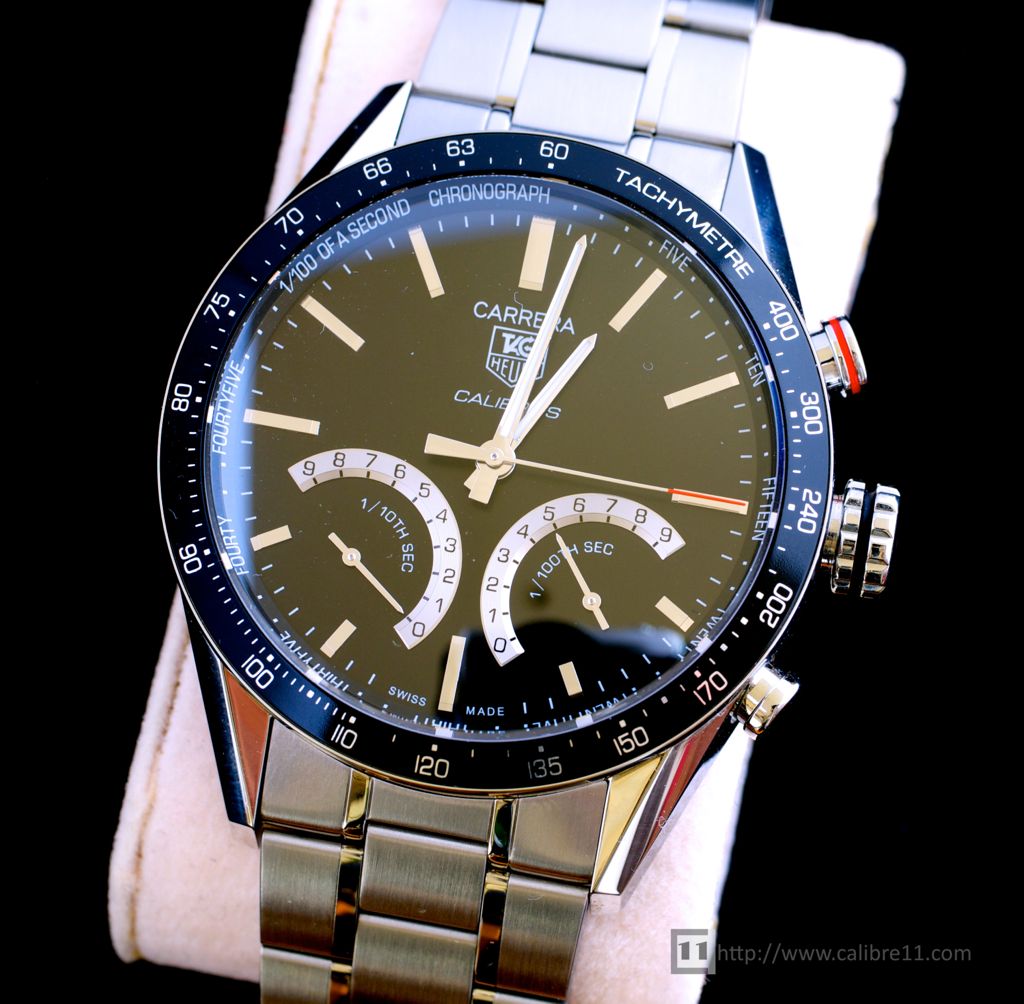 Calibre S sub-dials aside, the watch has a conventional look, with a simple, flat black dial, applied hour-markers and a black tachymeter bezel. 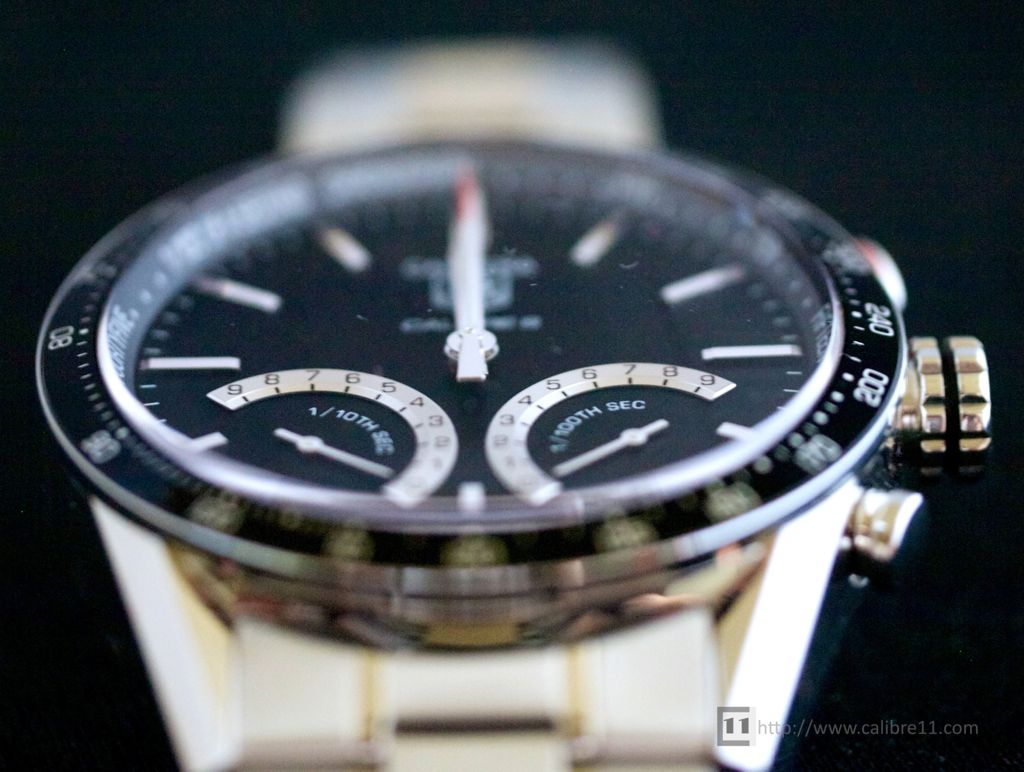 Overall the design works well, although the two Calibre S registers can look a little lost on the dial. On most Calibre S models, the two registers extend towards the edge of the dial, as with the Link Calibre S below. But the larger diameter of this Carrera means that this isn’t possible and so the registers don’t integrate into the dial as neatly as on other models. 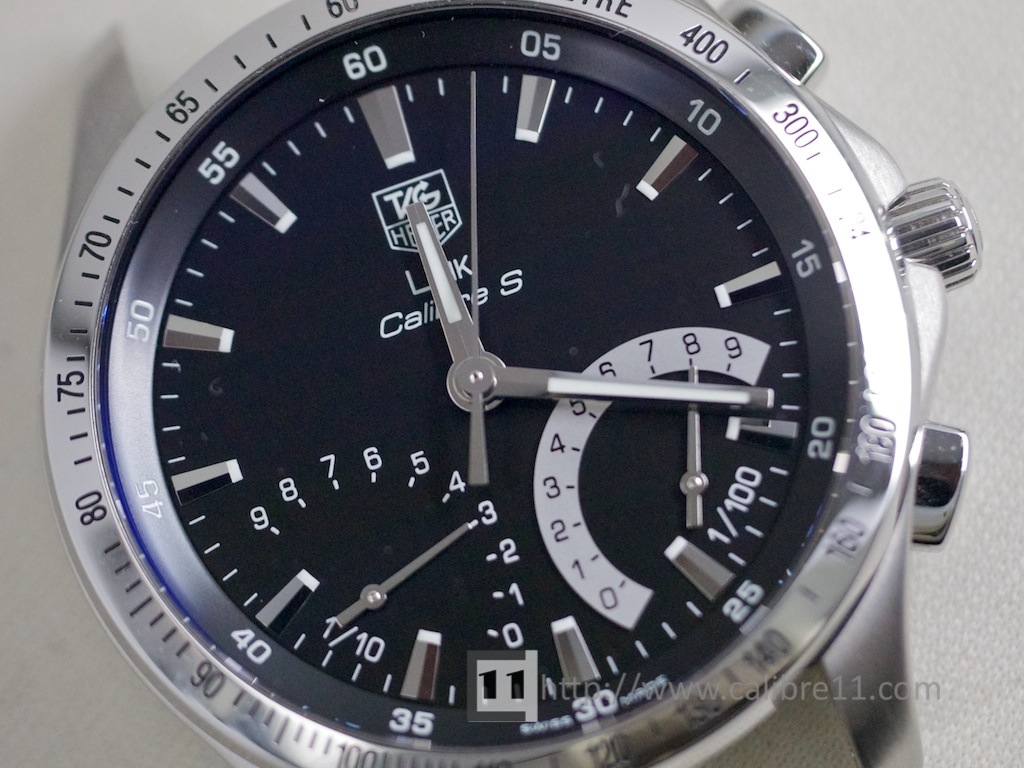 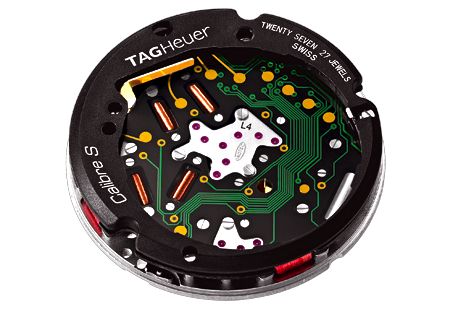 The Calibre S was announced by TAG Heuer in March 2005 and took a further 2.5 years of development until it was ready for commercial sale in late 2007.

Let’s start with the basics: the movement is powered by a battery. But labeling the movement as “quartz” understates the complexity of the Calibre S, which uses more than 230 components (as against 30-40 in a traditional quartz movement). TAG Heuer refers to the movement as an “electro-mechanical” Calibre, a label that brings back memories of the Calibre 185 quartz chronograph from the 1980s that combined a quartz base movement with a traditional mechanical chronograph module.

But the Calibre S is different again to these “mecha-quartz” movements, as there is no traditional chronograph module. Below you see the five bi-directional motors that sit at the heart of the (partly assembled and showing only one set of wheels) Calibre S. 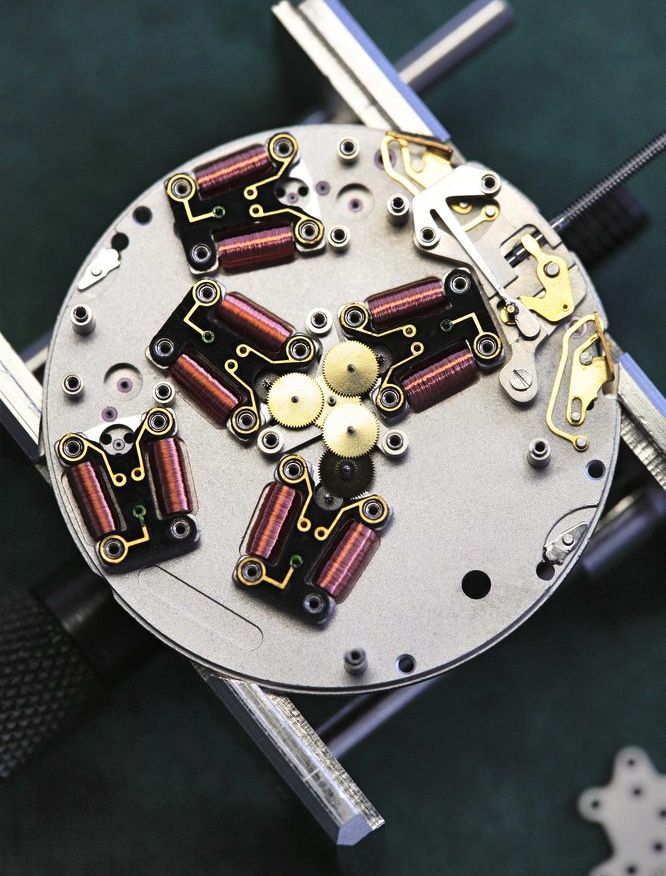 The Caliber S was designed and developed by TAG Heuer as a true “in-house” movement and is the only quartz movement assembled by TAG Heuer. As CEO Jean-Christophe Babin told Watch Time’s Joe Thompson in October 2006:

“It is more complex than most mechanical movements. You have five engines, all bi-directional. Each engine drives four wheels. You have more wheels in the Calibre S than in a mechanical watch. So even if the heart of the watch is quartz, the Calibre S is much closer to a mechanical product. The assembling of the hands on a bi-directional axis is very delicate, one of the most difficult hand-assembling jobs you’ll find.” 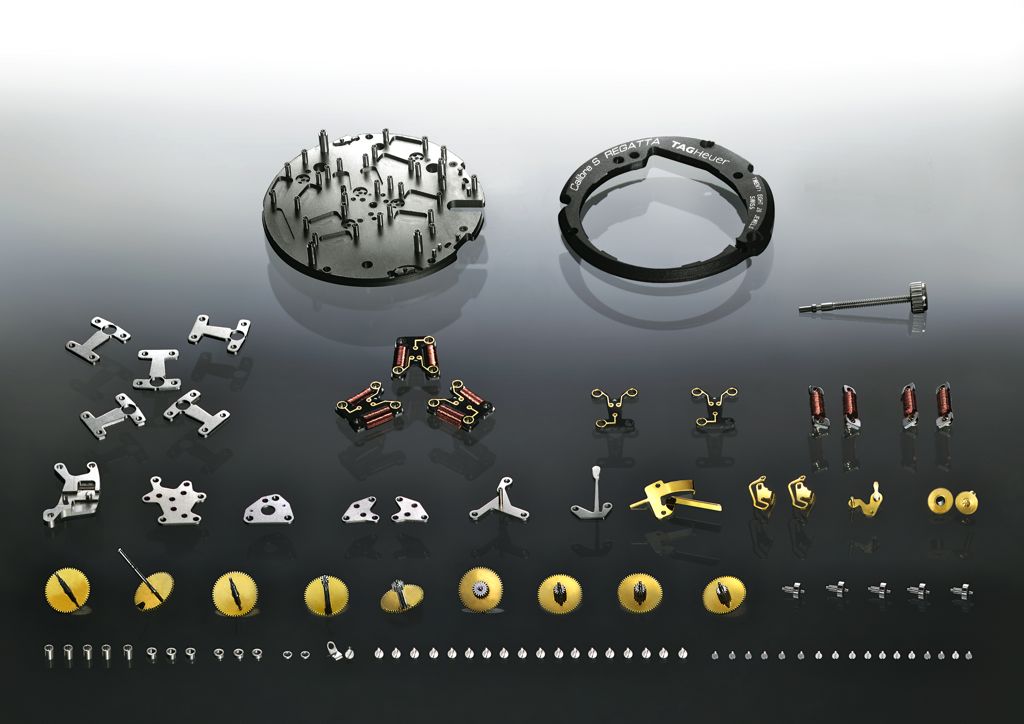 If you like your definitions black or white, then the Calibre S is a quartz movement…albeit a complex and clever one. 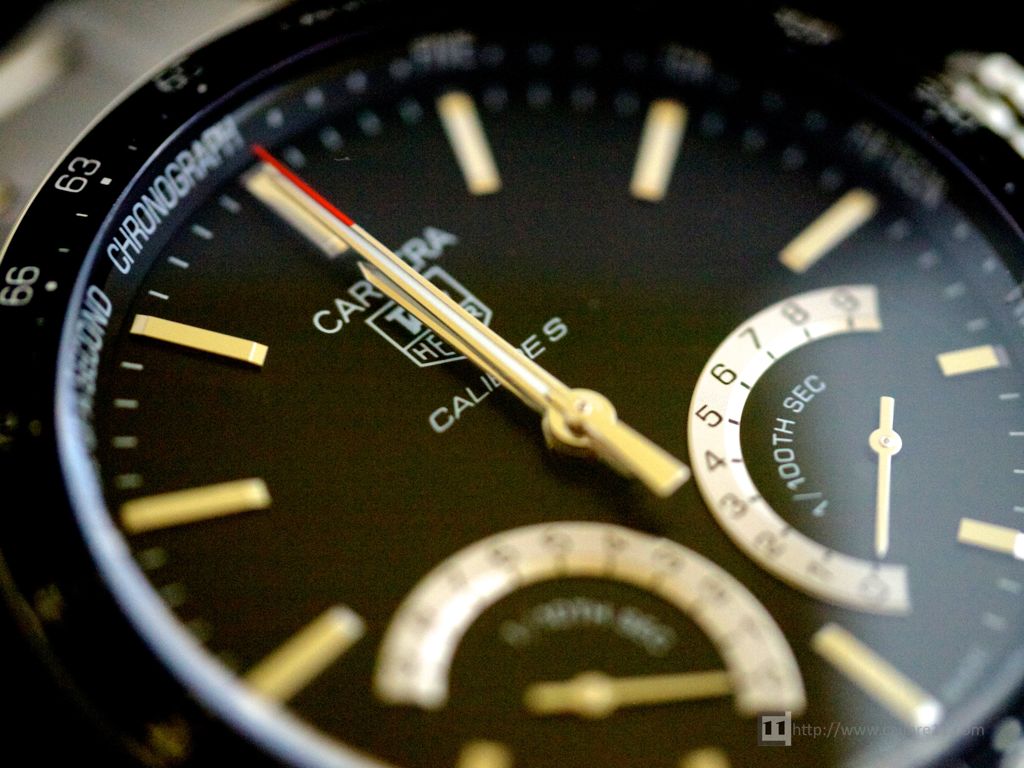 So what is the point of this complexity? There are two benefits- legibility and flexibility.

The starting point for the Calibre S is that traditional chronograph movements can be difficult to read, especially when they display 1/ 10th and 1/ 100th of a second. Watches showing these fractions of time typically use three circular registers, which are hard to read quickly due to their small size. The legibility of the Calibre S is markedly superior to these movements as we’ll explain shortly.

To switch between functions on the Carrera Calibre S, you simply press the crown. The photo above shows the hands in Chronograph mode, while below is the watch in time mode. Let’s now take a closer look at each function. 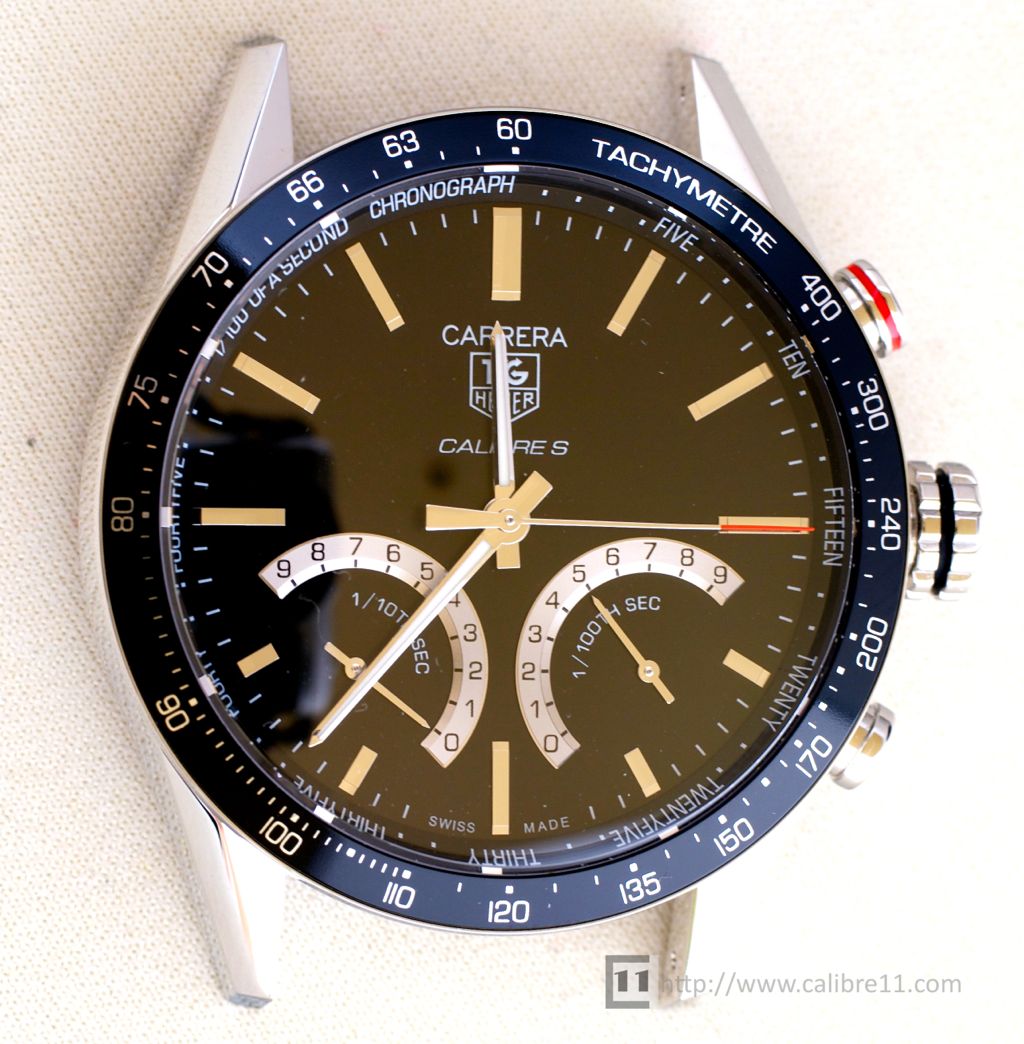 The default mode for the Calibre S is time mode, which works exactly as you’d expect, with traditional hours, minute and elapsed seconds hands. When in time mode, the two Calibre S registers display the date- the first digit is read from the 7.30 sub-dial and the second from the 5 o’clock sub-dial. In the photo above, the date indicated is the 5th of the month (“0′ and “5”).

The watch features a perpetual retrograde (retrograde meaning that the hand snaps back to “0” after it passes “9”- the hands being able to move both clockwise and anticlockwise, hence the “bi-directional motors”) calendar, meaning that you don’t have to change the date until 2099.

Press the crown and the minute, hour and seconds hand align to 12 o’clock and both sub-dials point to zero on their respective dials. Now, the hands have the following functions:

While the Carrera Calibre S shows 1/ 100th functionality, other versions of the Calibre S offer only 1/ 10th second precision, but with a third mode, for example the regatta functionality of the Aquaracer Calibre S. In regatta mode, the timing moves anti-clockwise, counting down the 10 minutes before a race, before switching to moving clockwise and working as a traditional chronograph- again using those bi-directional motors.

The Carrera Calibre S is sold with either the standard Carrera 5-link bracelet (above), or with a rubber strap (below on the Calibre S CV7A10) which fits the sporting character of the watch much better in my view. 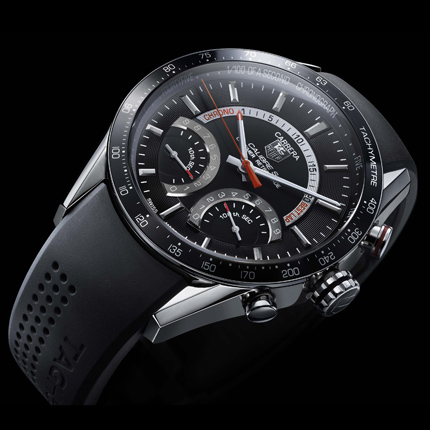 Flip the watch over and you see an engraved steel caseback, on which is engraved the details of which position the hands must be in to re-set the various functions- useful, as it’s not an intuitive watch to set. 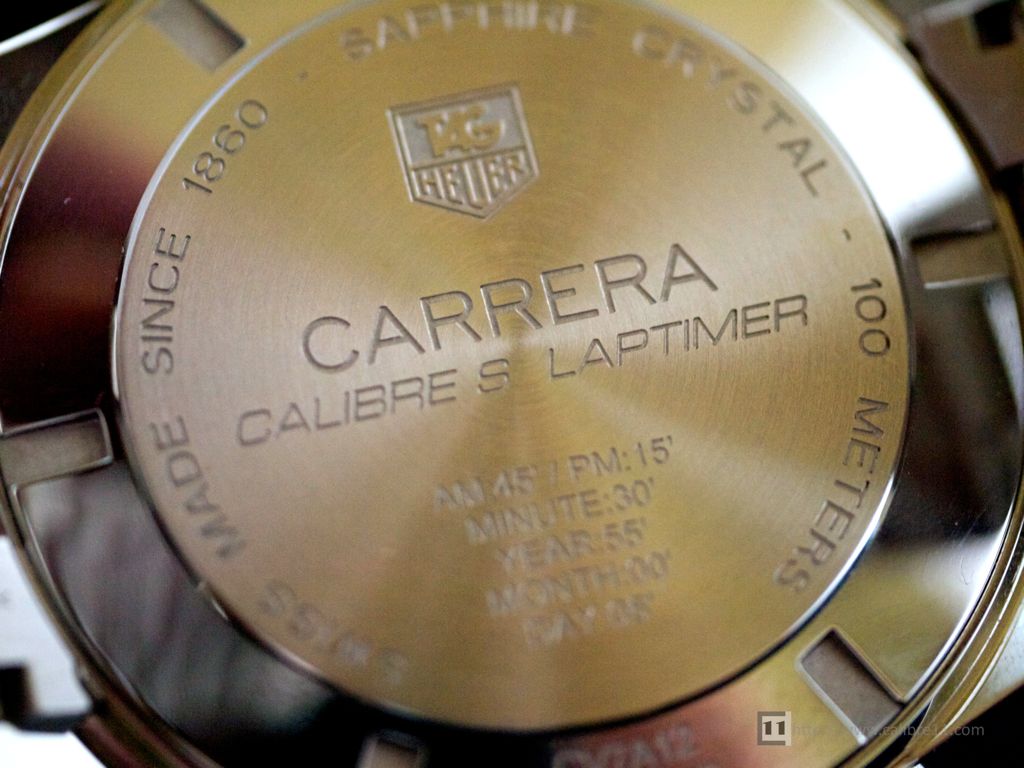 The Future of the Calibre S? 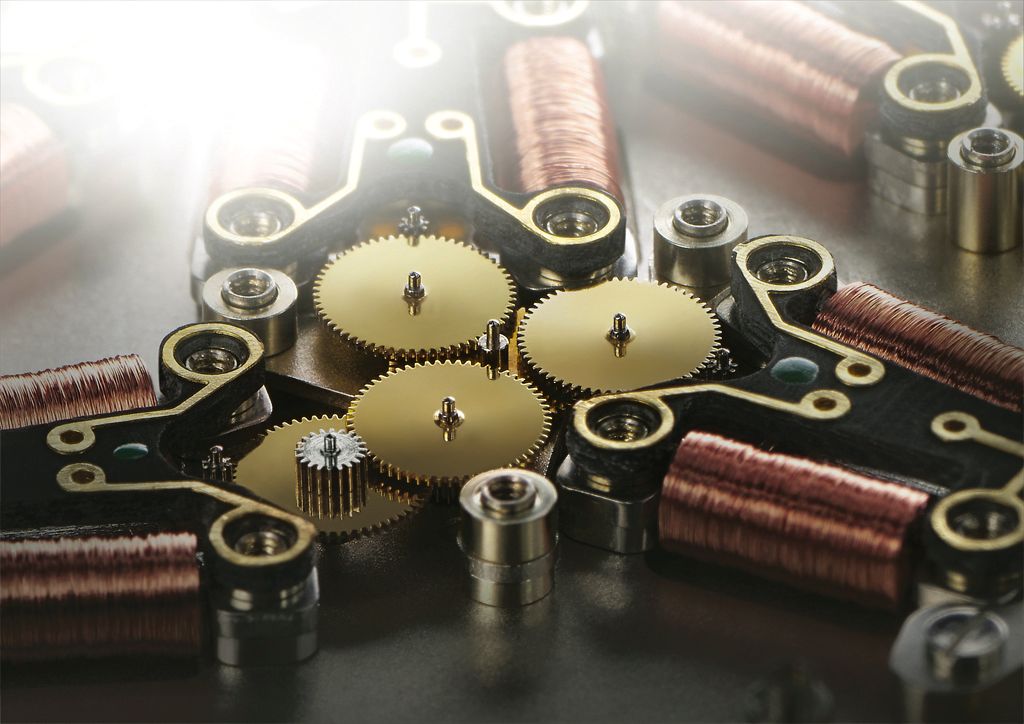 So what is the future of the Calibre S movement? Observers noted that the new Formula 1 range launched in January did not include a Calibre S model, although the movement is still available today in the Carrera, Link, SLR and Aquaracer watches.

While there is no official news about the future of the Calibre S, or the broader question of TAG Heuer using quartz movements, my expectation is that within five years, all men’s TAG Heuer watches will use mechanical movements- including the traditionally quartz-only Formula 1.

The problem is that watch buyers today equate quartz with low-price, which is a shame as there are several purposes for which a good quartz movement is better than mechanical (namely any use that involves lots of shock). There is a place for quartz movements in TAG Heuer watches, especially if they are innovative movements like the Calibre S. But unless the market perception of quartz technology changes, prepare for a mechanical-only future. 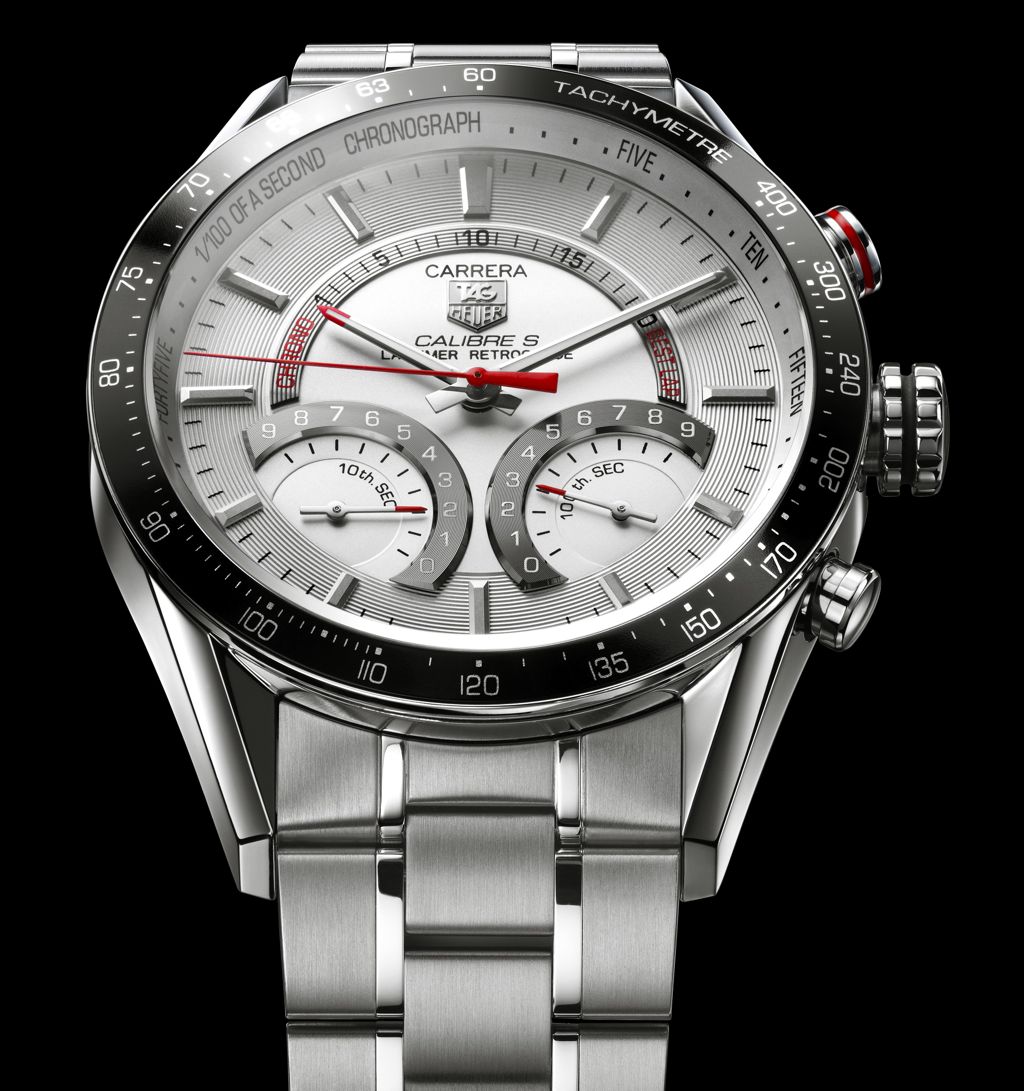 There have been two generations of Carrera Calibre S, the first model being the (Ref. CV7A10- above) Carrera Laptimer which features a radial patterned dial, red-tip second and sub-dial hands. This model has a third function, called “Best Lap”, where the watch will remember the last 20 laps and display which lap number was the fastest.

The second model- the CV7A12 shown in this review- was introduced in 2009/ 10. Both watches are available with either a black or a white dial.

While similar in design, I prefer the CV7A10 model, which has a more complex, patterned dial and the “Best Lap” indicator. Note how the two semi-circles integrate nicely into the radial pattern rather than the floating look on the CVCVA12. The Laptimer is not as classical as the  model shown in this review but to my eyes is a more interesting design. 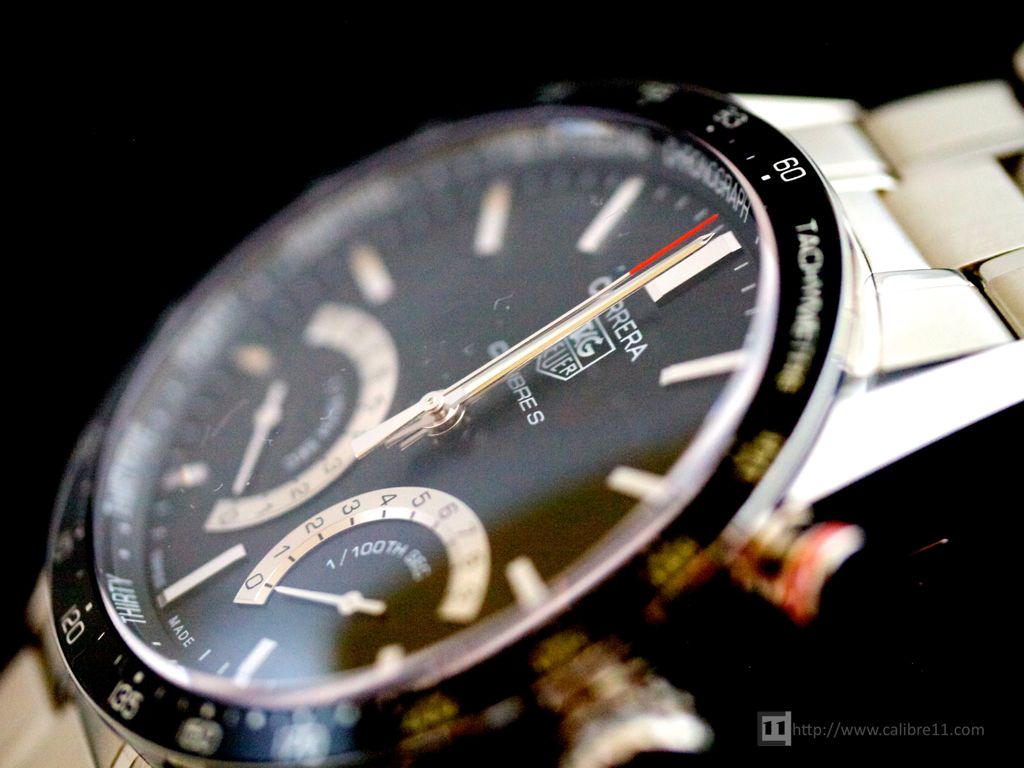 The more that you take the time to understand what the Calibre S is and what it can do, the more impressive it is. Its functionality more than justifies its label as a hybrid movement and is exactly the sort of quartz movement that premium brands should be offering as a high-quality alternative to mechanical movements.

And given that the movement can time to a precision of 1/ 100th of a second, it’s appropriate that the movement has found a home in the Carrera. While the Carrera Calibre S offers a classical design, I felt that it’s almost too conservative in its looks, especially compared to the Laptimer Carrera.

The slimmer case of the watch is a welcome change from the other Carrera models, and confirms that slimming down the case on all models should be a priority for the next-generation of Carrera watches. 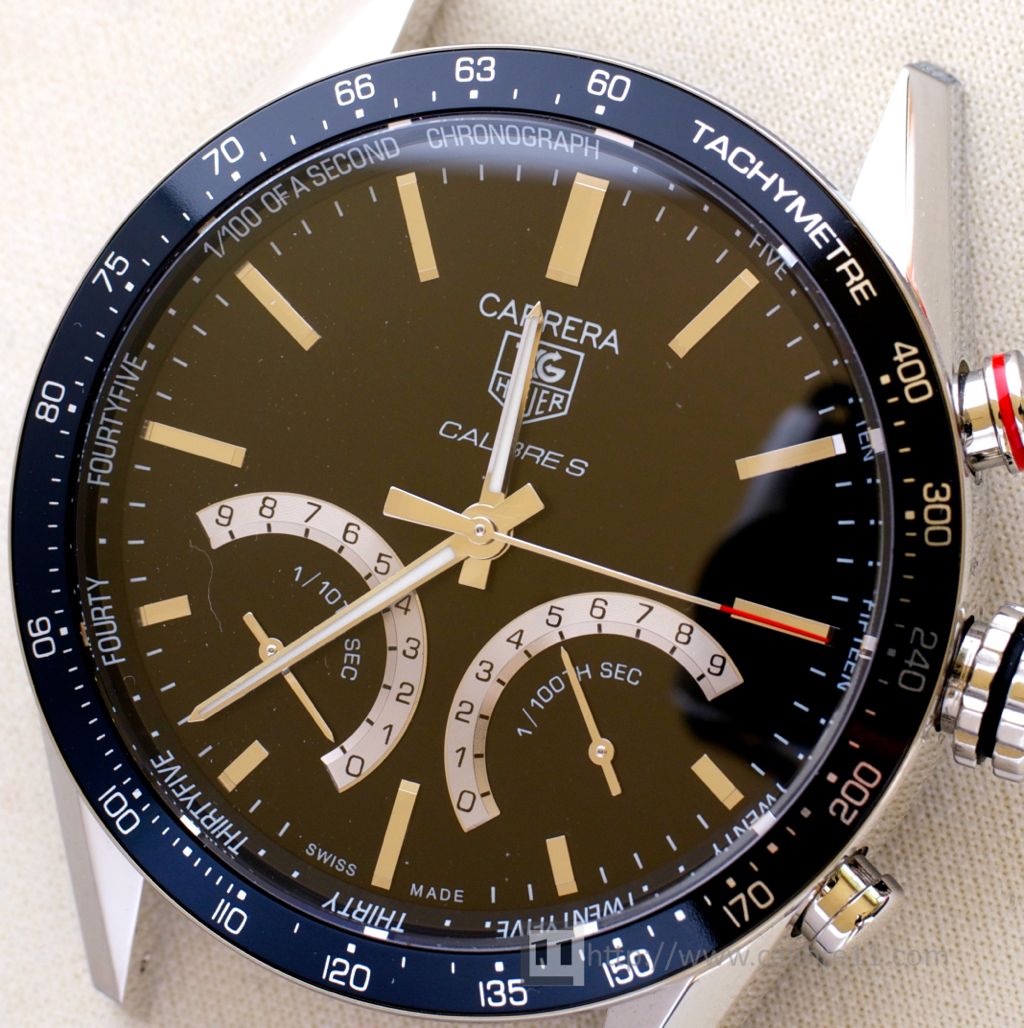 Many watch buyers and collectors are unashamed snobs when it comes to quartz movements, and I too prefer a mechanical watch unless I have a specific need for quartz. But the TAG Heuer Carrera Calibre S is interesting and clever enough to warrant a closer look as it offers something quite different to traditional mechanical or quartz technology. Quartz movements in premium watches may be on the wane, but if quartz technology is improved and adapted it makes sense to include “high-end quartz” options well into the future.

Want to find out more about the history of the TAG Heuer Carrera? Check out the dedicated Calibre 11 Carrera mini-site to see all ten generations of the Carrera from 1963-2013.