While the big news to come from TAG Heuer’s pre-Basel collection last week was the Carrera Mikrograph, the release of the Carrera MP4-12C was just as eagerly anticipated, especially for the many fans who also closely follow the McLaren team on and off the track. 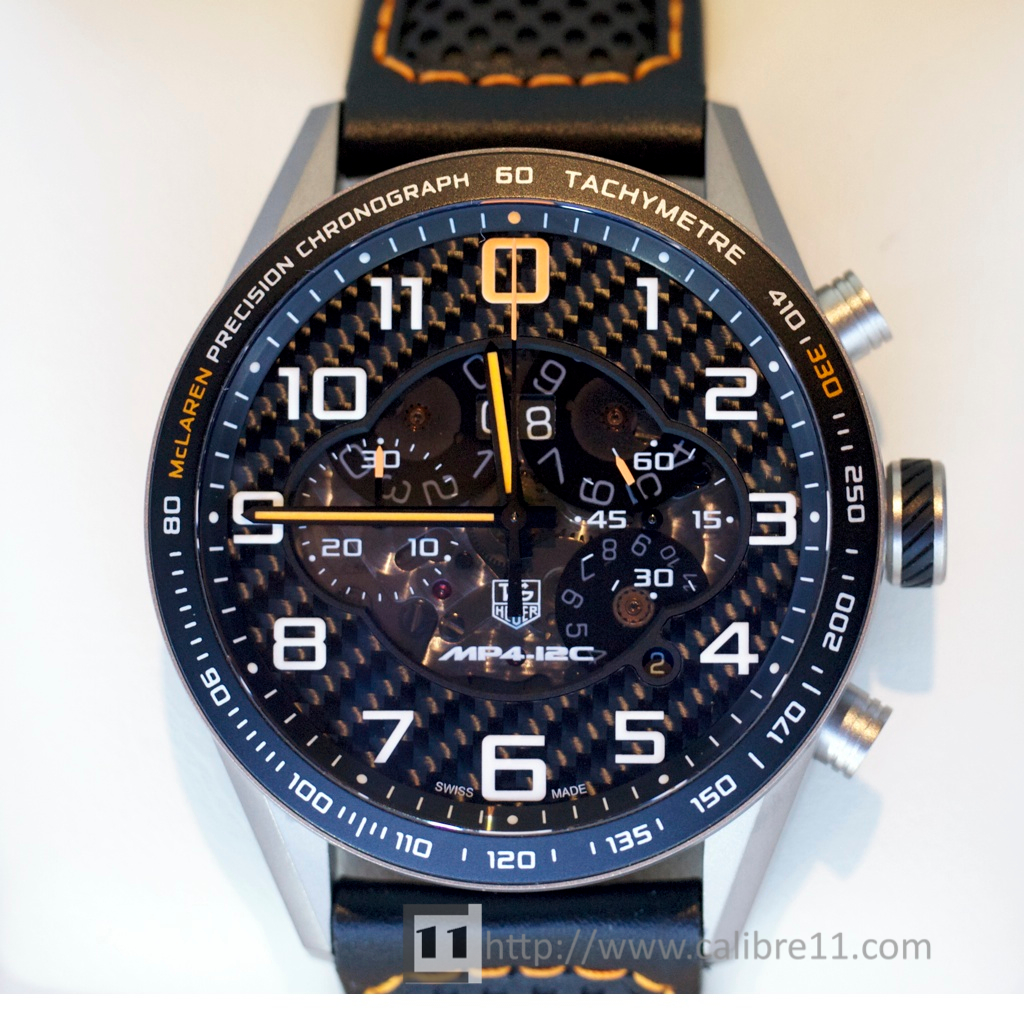 Last week we showed you the official press photos of the watch, but today we can bring you a detailed review from the launch that gives a better perspective of the intricate design of this Limited Edition watch, as well as an interview with TAG Heuer’s CEO on the development of the watch.

The Carrera MP4-12C (Ref. CAR2080, a Limited Edition of 1000) is the latest in a long line of TAG Heuer watches made for McLaren, which you can read about here and here.

So, lets take a closer look at this new Carrera, and in particular several aspects of the design that relate directly to the car, which is not surprising given the involvement of McLaren Automotive’s head designer Frank Stephenson (whose design credits include the Fiat 500, the Mini and the wonderful Maserati Quattroporte) in designing the watch. 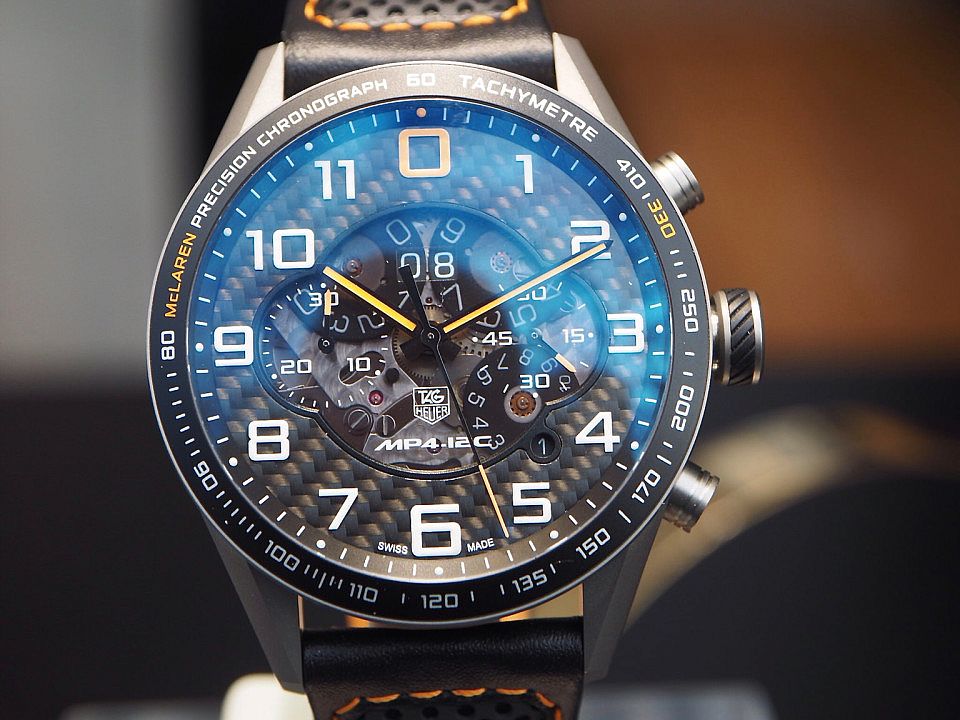 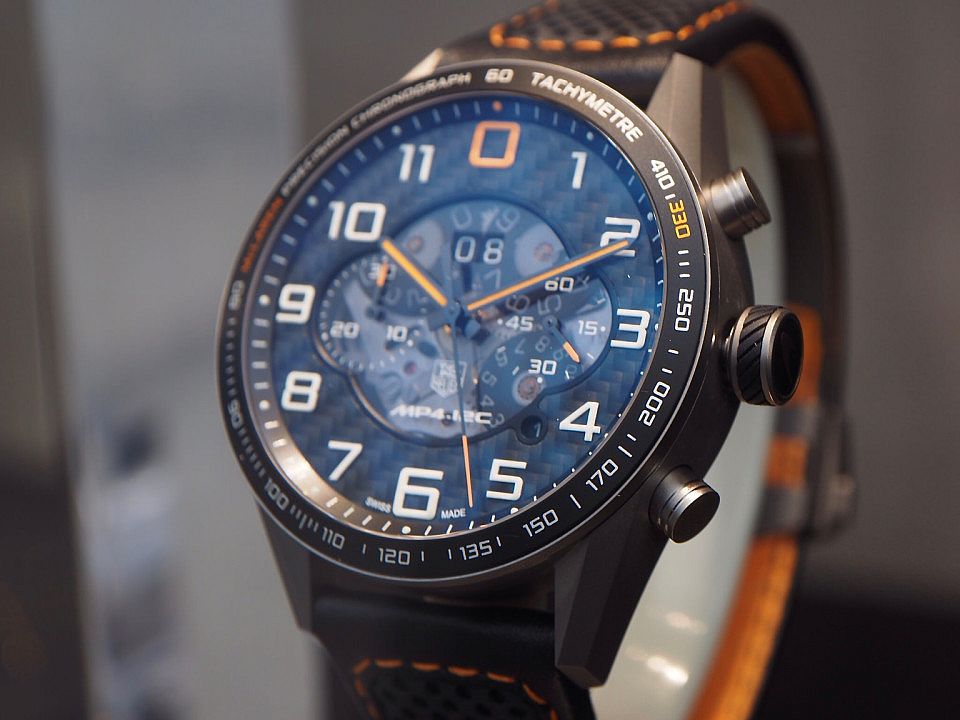 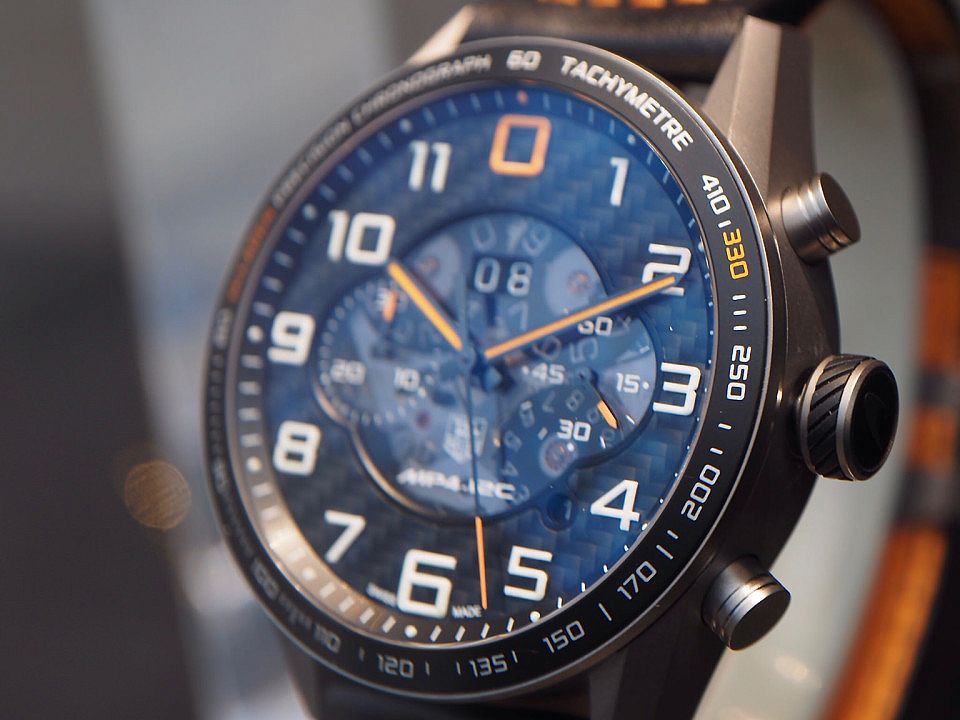 The most well-known McLaren colour schemes are the red and white Marlboro colours used for almost 25 years on their Formula 1 cars and the Black, Red and Silver scheme that the team has used for the last 15 years. However, true aficionados know that the proper colour for a McLaren is the shade of Orange used on the Formula 1 cars of the late 1960s and the great Can-Am racers. Today the Formula 1 team will often test their new car in “McLaren Orange” before officially launching the car in the sponsors’ colours.

This Orange detailing can be found in several places on the watch, including the dial (The large Orange “0”), hands (Hour, Minute, Seconds and the Chrono.), Bezel and the stitching on the strap. 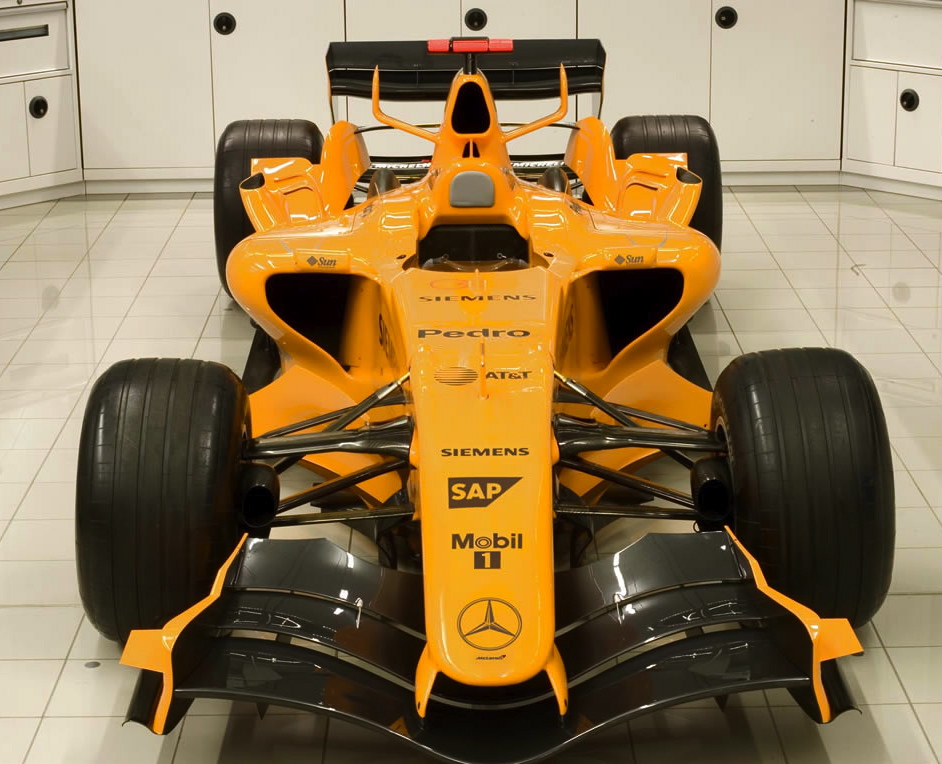 What makes this McLaren Carrera distinctive from other Carrera’s is the dial. It is the most interesting design aspect of the watch, and perhaps the most controversial. The dial is Carbon-Fibre with a sapphire window in the centre of the dial shaped as a large central circle with smaller overlapping circles either side. The window allows you to see the two Grand Date wheels and the perpetual calender wheel. Standing proud in the 12 o’clock position is a large Orange “0”. 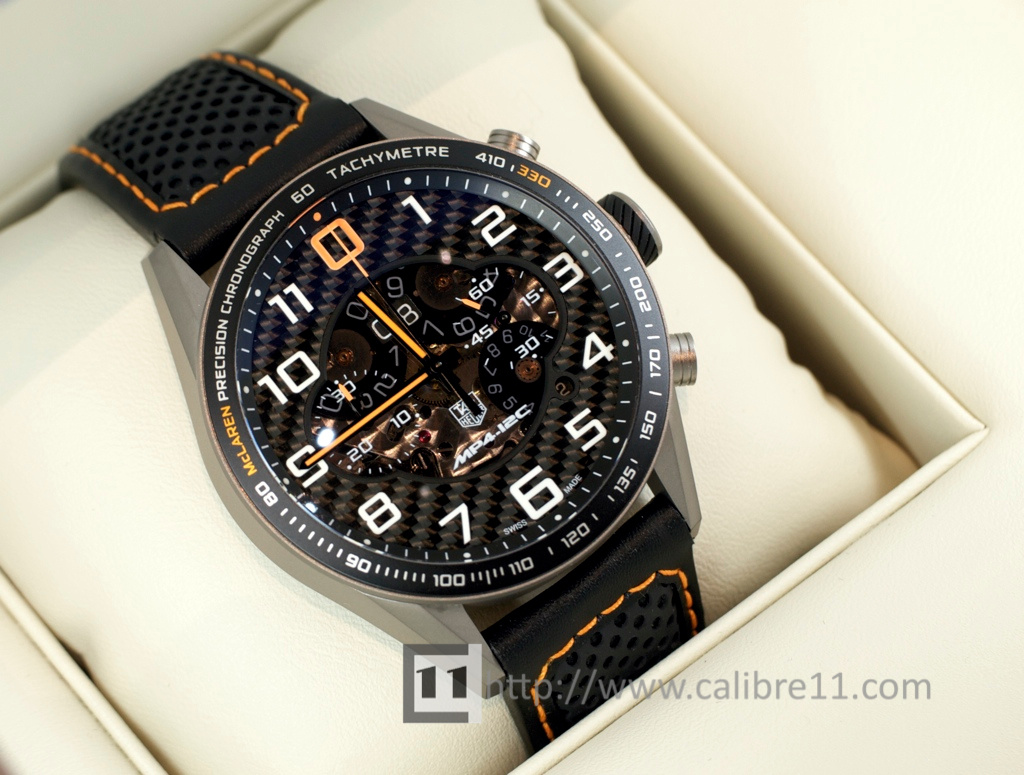 The dial design links back directly to the Dashboard of the car, which also features a a large central circular dial (the Tachometer) and then two pods either side. Note that the Carrera uses the same font for the numerals as the central Tachometer on the McLaren, and the watch “starts” at “0”, just like the rev counter. 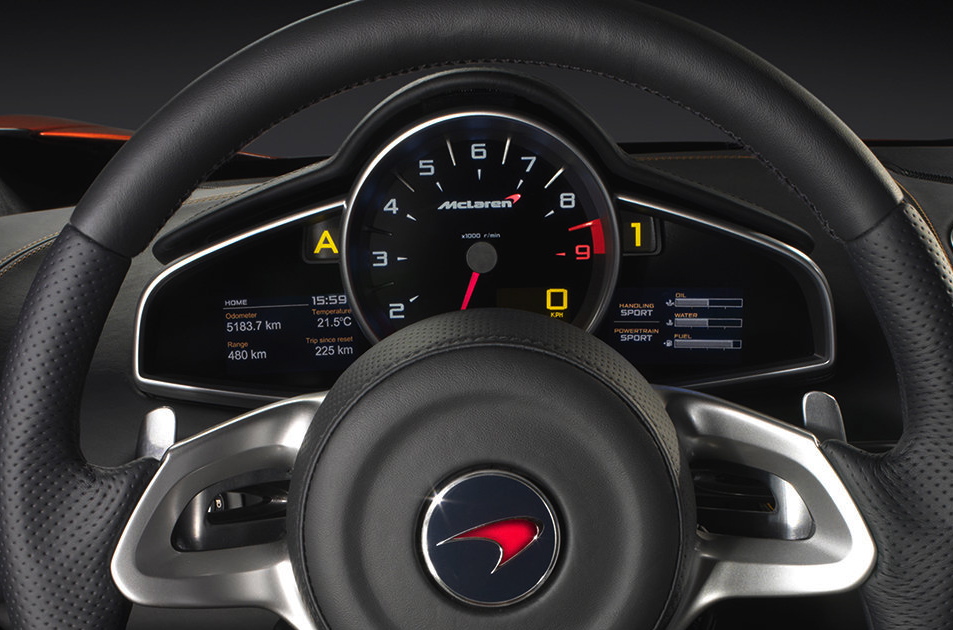 So why Carbon-Fibre? I’d argue that McLaren have done more to advance the use of this space-age material in cars than any other company. They were the first to make a Formula 1 monocoque from carbon composite in 1981 (the McLaren Ford MP4/1) and in 1992 the F1 was the first production road car to use a complete carbon-fibre reinforced plastic monocoque chassis. The new MP4-12C (The “C” standing for Carbon-Fibre) has a Formula 1-style tub that can lifted by a single person, yet is still incredibly strong.

The distinctive aspect of Carbon-Fibre is of course the weave, which you can see clearly on the close-up on the dial below. I’m sure that the decision to use Carbon-Fibre on the dial was one of the easiest and first decisions made by the joint design team. 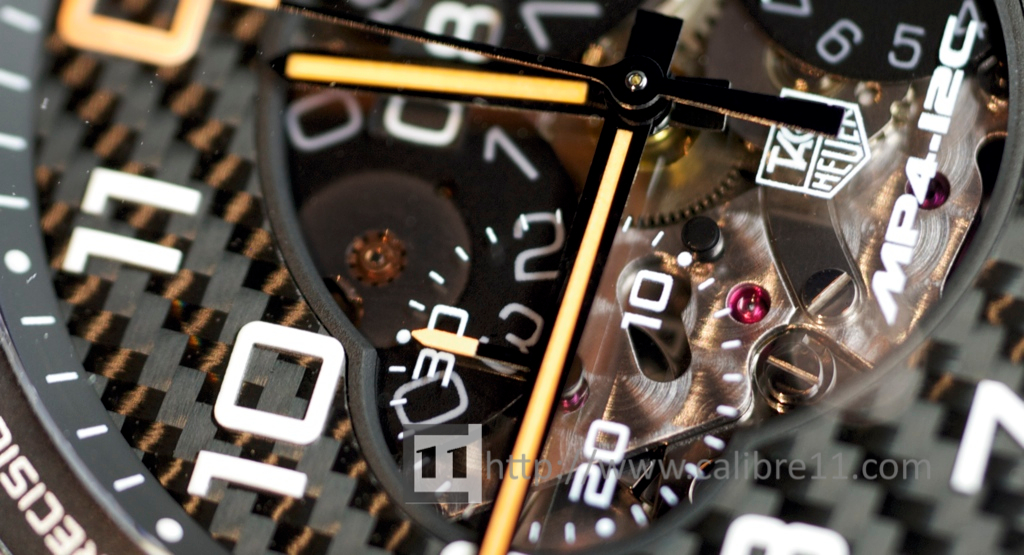 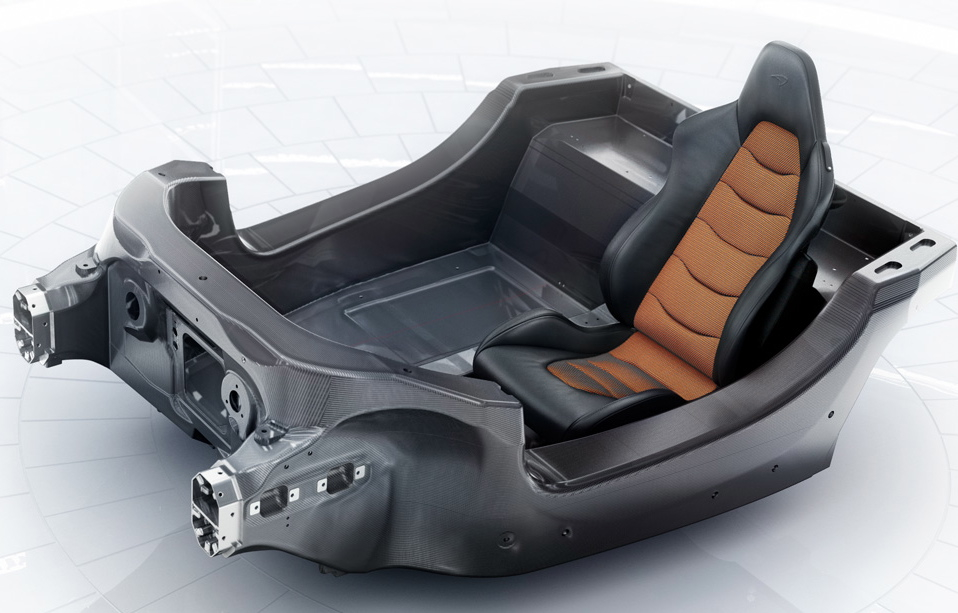 The Pushers have been designed to look like the top section of an engine piston- an easy way of distinguishing the watch from other Carrera’s. The crown has a nice rubber grip, the design of which I assume is influenced by the car’s tyres and is complemented by the McLaren “Tick” in the place of the usual TAG Heuer logo. 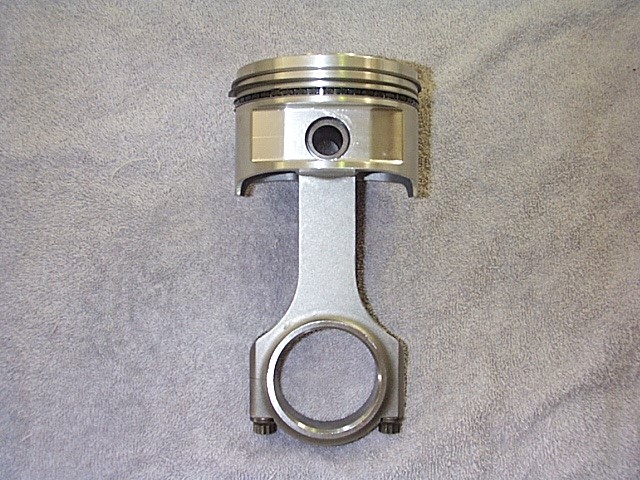 The strap is has an interesting Rally-style finish with bright Orange stitching on the front and soft orange Alcantara (a synthetic Suede) on the back. It’s a nice design that perfectly matches the modern, technical look of the watch and has a direct link to the patterning of the seat inserts- one option of which is Alcantara- of the McLaren, as you can see below. 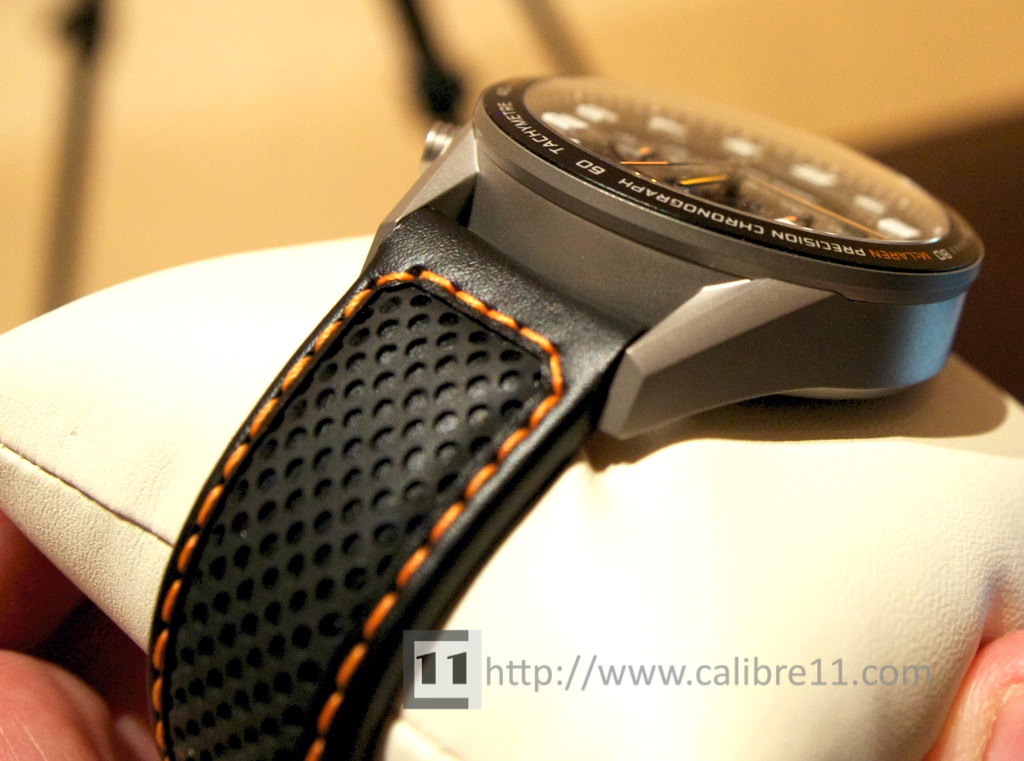 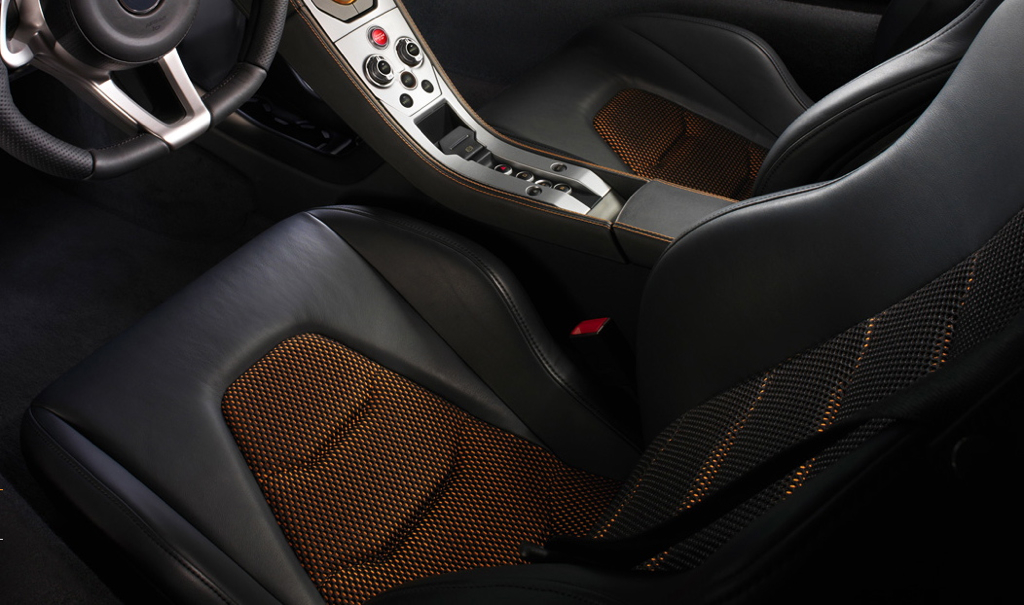 Like the front of the dial, the back of the case also features a clear sapphire window so that you can see the movement. As mentioned at the launch of the watch, the movement used here is the TAG Heuer Calibre 49, which is a Dubois-Depraz 4900 movement (itself based on the ETA 2894, but with a high-grade D-D Chronograph and semi-perpetual date function). I like the idea of the semi-perpetual calendar, even though it seems a shame to only have the number of the month indicated rather than being spelled out in words. Frankly the dial is already busy enough without adding a larger date window, but it does seem a shame to have such a key feature of the movement almost hidden away. 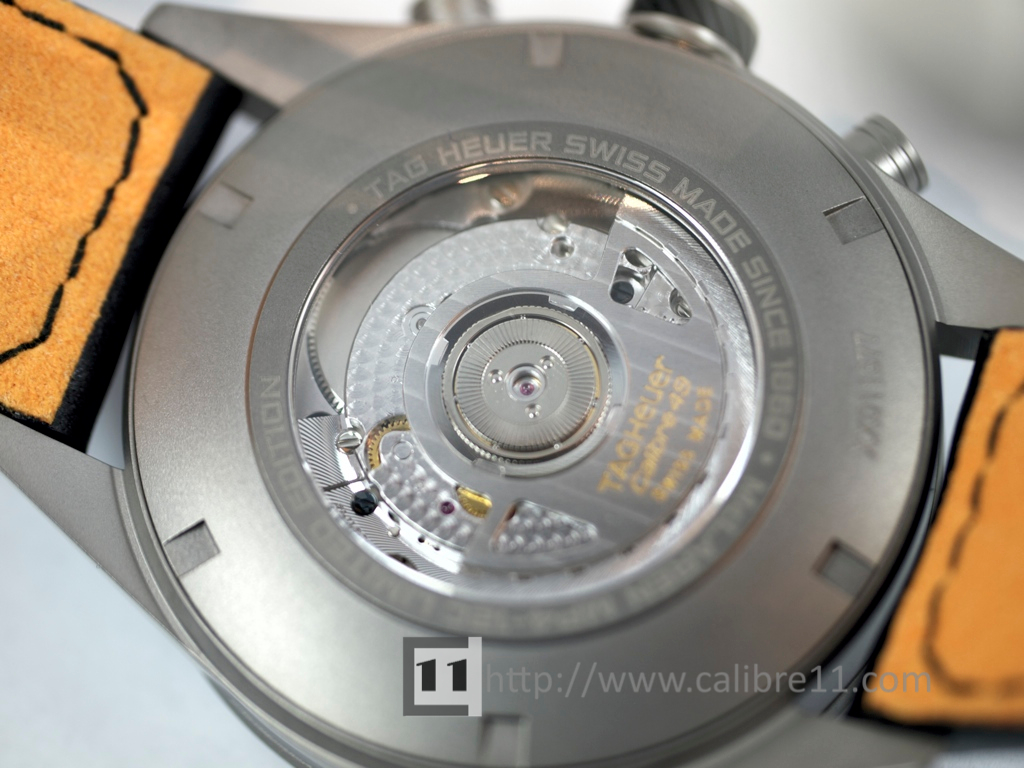 The full specifications of the Calibre 49 are as follows:

Of course, it’s not just watches that have begun adding windows to show off their “engines”- the 3.8 litre twin-turbo V8 engine of the car is also showcased by a clear rear screen 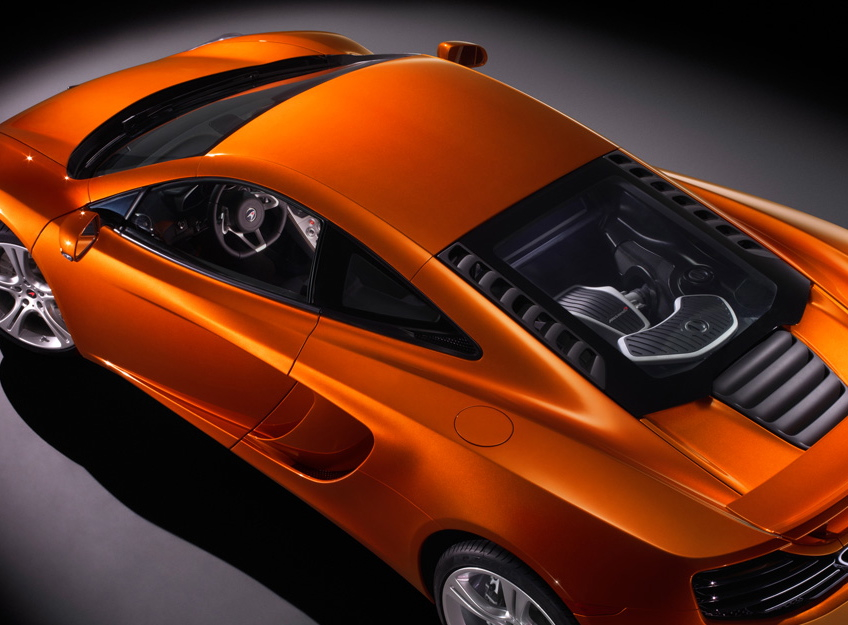 So Does The Design Work? 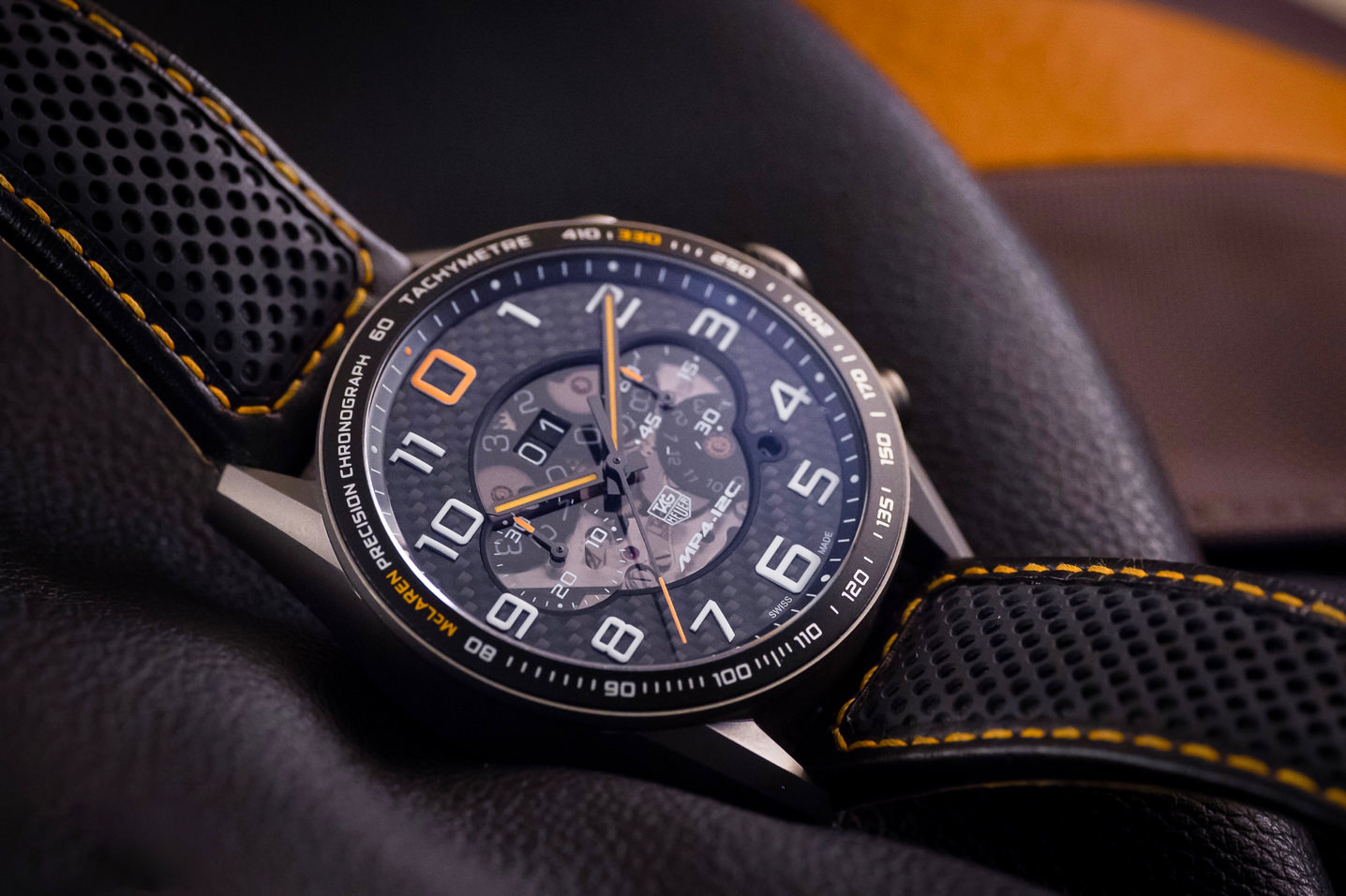 It’s one thing for the design of the watch to closely match the DNA of the car- which it does very well- but it’s another for that design to actually work as a watch. And with that in mind, perhaps the only aspect that I would change is that I would have painted the Carbon-Fibre dial in matte black. The “Chequer Board” pattern of the Carbon Fibre gives the dial and heavily textured look, which is then combined with the white date wheels sitting behind clear sub-dials with white text. It’s a highly complex design that makes it tough to easily read the sub-dials.

Making the dial a matte black would have helped this issue, but it would also have meant losing one of the key design signatures of the car- the obvious use of carbon-fibre. 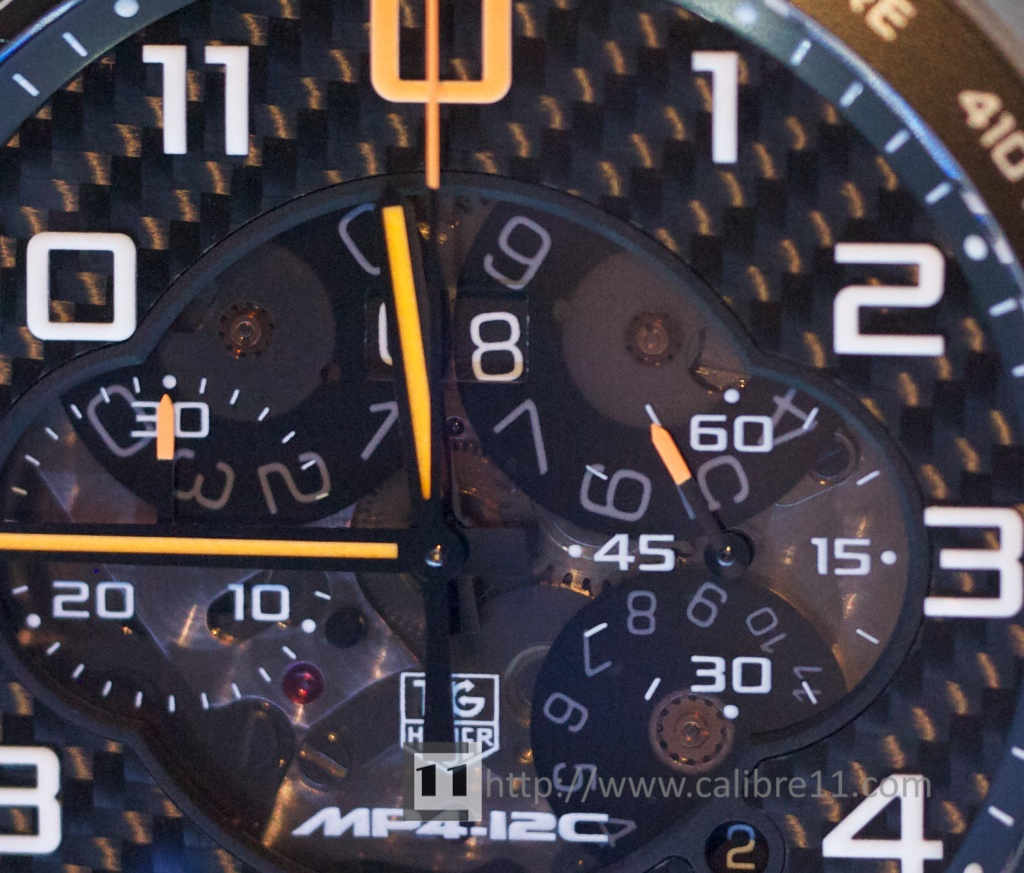 Overall I love that so much effort has gone into making this a bespoke Carrera rather than just adding a McLaren logo on an existing model, which would have been very easy to do. While I prefer the more classical look of the Carrera Mikrograph, the design of the Carrera Mp4-12C is a perfect match for the car- not just in the small details as described above, but as a technical, modern design and one that stands out. 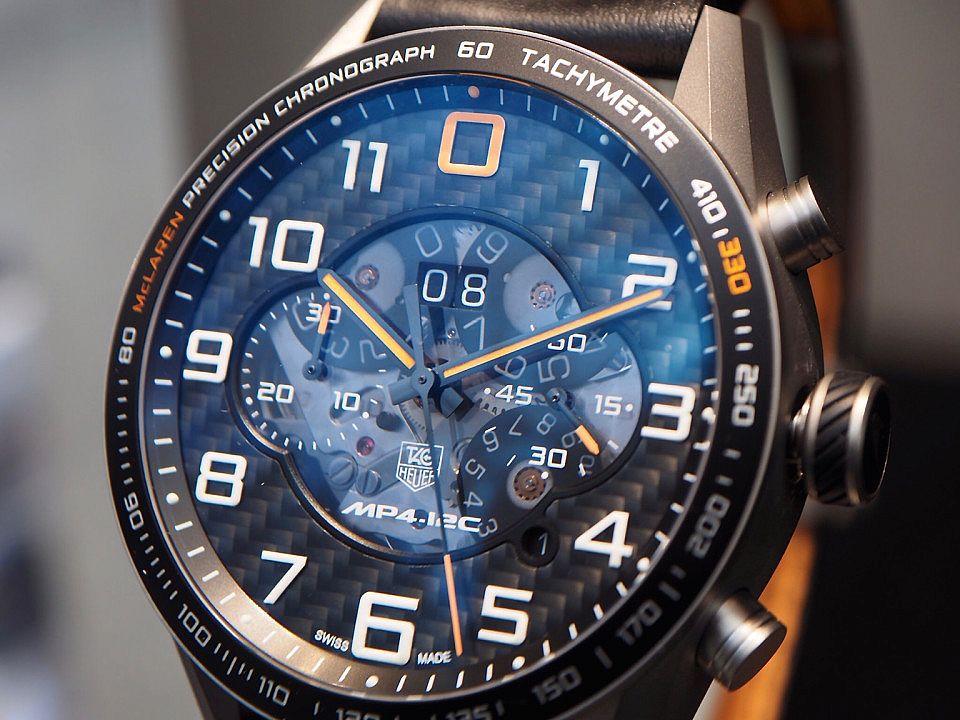 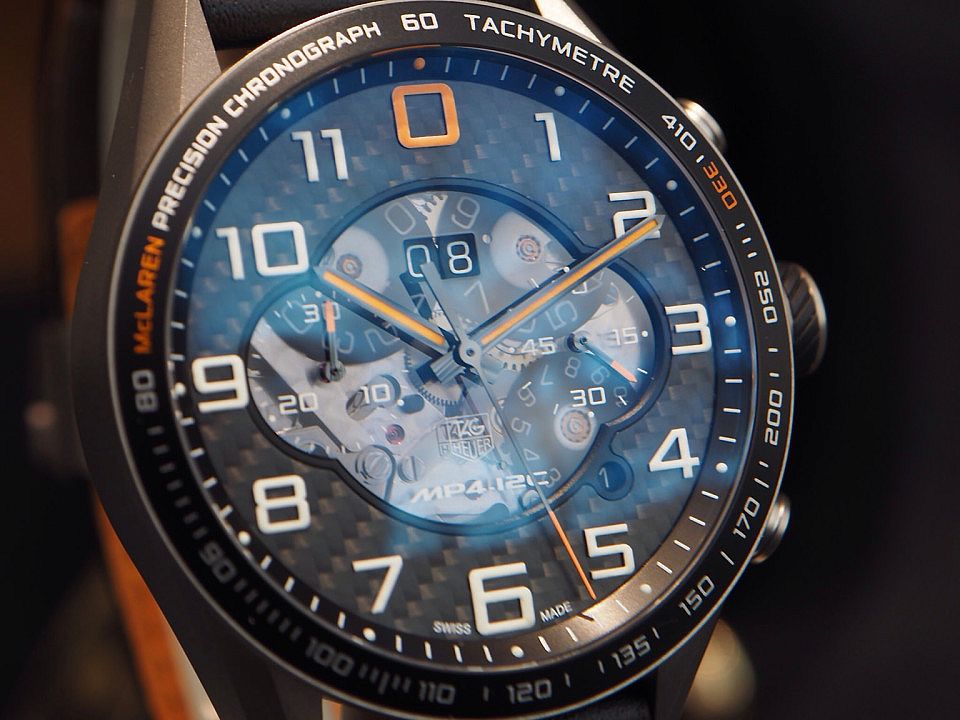 The View From Jean-Christophe Babin

The last word on the new TAG Heuer Carrera Mp4-12C should go to TAG Heuer CEO Jean-Christophe Babin, who had the following to say about the new watch:

Calibre 11: Tell us a bit about the development of the watch

JCB: Ah, this is an amazing thing. We’d made an exceptional owners watch with the original SLR, which you could buy only if you bought the car and it was a fantastic success. A lot of SLR buyers did indeed end up buying the watch…many bought two, which was the maximum allowed per car.

As so based on that successful experience, when Ron Dennis told us that he would launch a new McLaren car, he asked us if we would consider doing what we did a few years back for the SLR- for us it was obvious: we’ve been partners with McLaren for 26 years, so when we saw the first photograph of the car, it was just amazing with the carbon chassis and it was a challenge and a privilege.

C11: How involved were the McLaren design team with the Carrera?

JCB: So we have worked very closely with the designers so that the face of the watch will be as close as possible to the face of the car. We had a lot of back and forth with their designers, working sessions with our designers going to the MTC and vice-versa until we cam e to something very close to the car dashboard, but of course with different functions. For the first time on the dial we’ve mixed Carbon-fibre and sapphire for the window , which looks amazing in daylight, and the watch shows how the Carrera case can be versatile, from ultra high-tech like the MP4-12C to virtually vintage like the Mikrograph.

Then we looked for a special movement which is unique to that Chronograph- we don’t use it for any other model and its based on the Dubois Depraz 4900- an impressive Chronograph with fly-back.

C11: And finally: Availability and Pricing?

JCB: It’s a unique piece that will be sold to the car owners and will be featured in the flagship stores that McLaren is starting to open and we may also sell it in a selected number of our own boutiques, so distribution will be extremely exclusive [1000 watches] with a price of USD14,000.