The Formula 1 series gets a new look for 2011- four new designs with three different quartz movements.

The Formula 1 watch was the first watch developed by TAG Heuer after the change of ownership in 1985. Most of the early TH range was made up of Heuer-developed watches with the new logo, but the Formula 1 arrived in 1986 followed by the S/el in 1987 as the paths between the old Heuer and the new TAG Heuer began to diverge. 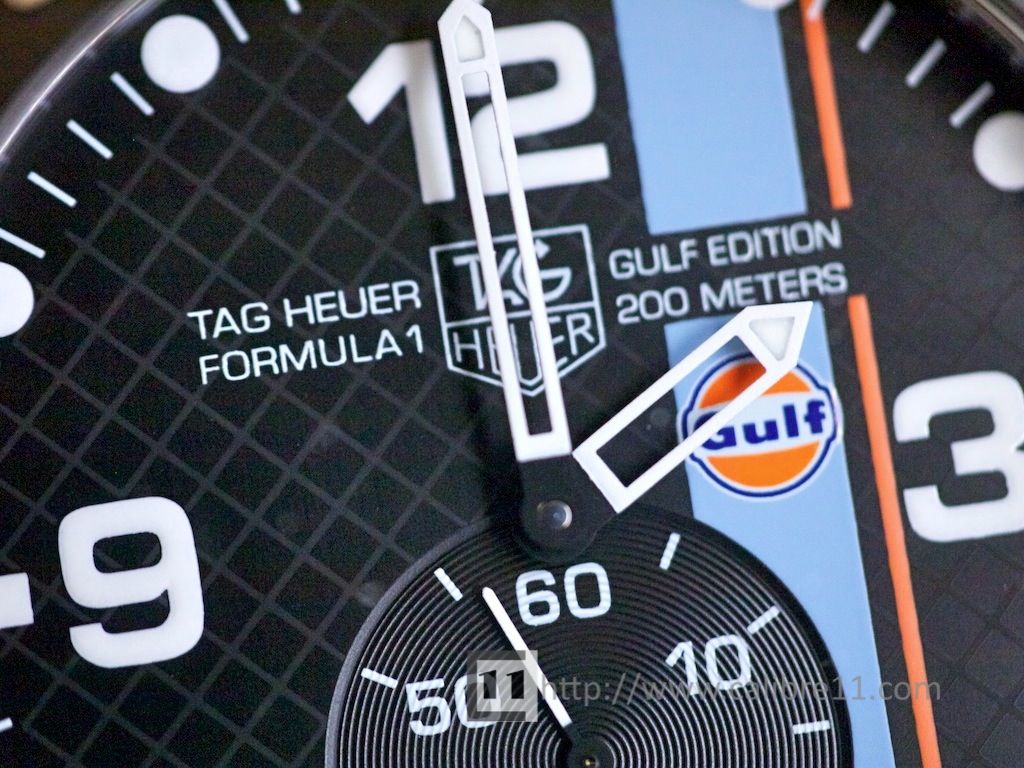 The Formula 1 was a watch for the ages- new, low-cost materials (notably, Fibreglass), a bright array of colours (à la Swatch) and a new budget price ($145 in the US). The Formula 1 series brought TH a new customer base and was a smash hit, with more than 3 million being sold between 1986 and 2000 when the line was discontinued. 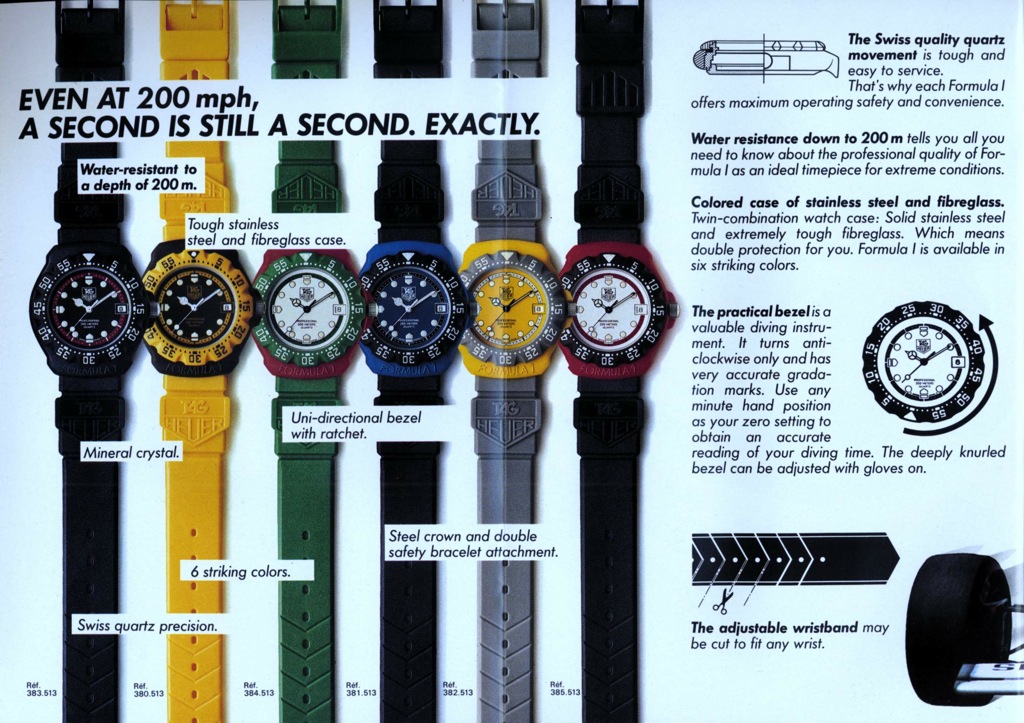 In 2004 the Formula 1 was totally re-designed and re-launched with Kimi Raikkonen as the face of the new watch. The new 2004 series was a much larger watch (basic watch was 40mm versus 37mm) and significantly stepped up the quality of materials- out went the plastic bezel and mineral glass, in came a steel bezel coated in titanium carbide and a sapphire crystal.

Since 2004 the refreshed Formula 1 series has been tweaked a few times- many models today have lost the polyurethane “bumper” of the original 2004 models- and given that the model line is more than seven years old, you can expect a new Formula 1 series in the next 12-18 months. But until then, we have the updated 2011 range. 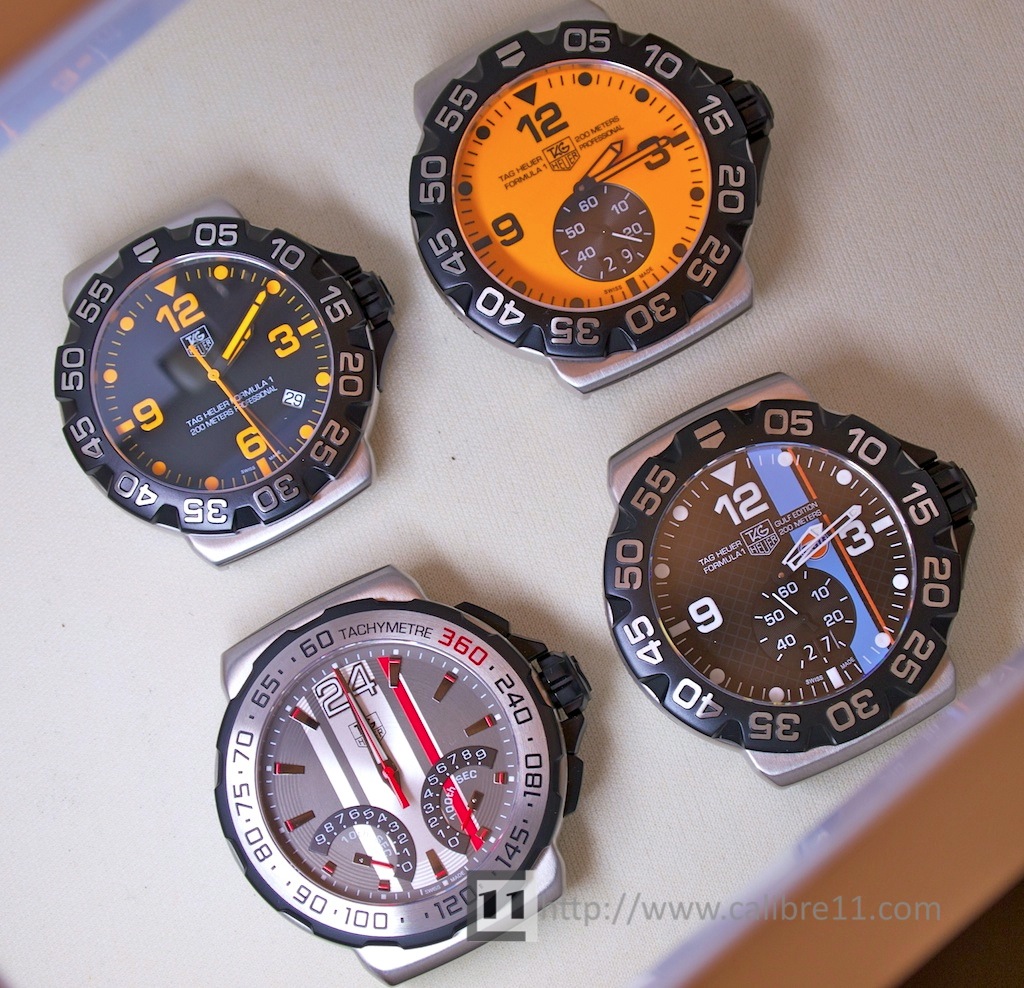 I’ve shown photos of each of these watches before, but this is the first time that I’ve been able to borrow the watches to see what they are like in the flesh. 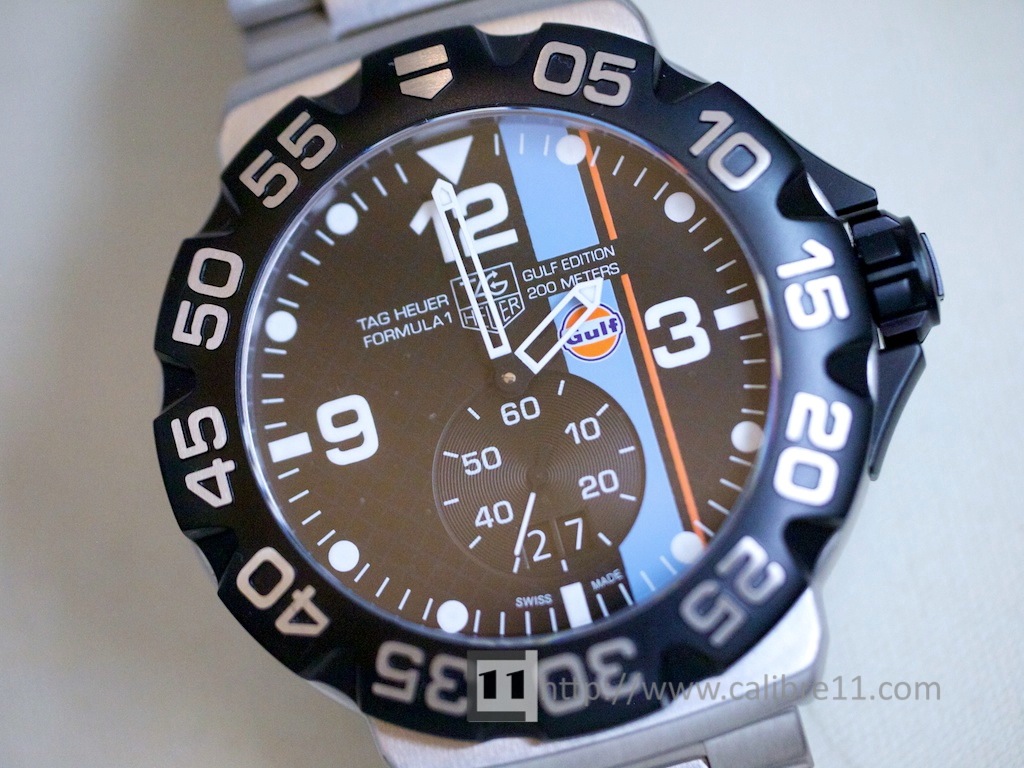 Probably the biggest surprise of the 2011 F1 line is this Gulf Edition model- the first time that the Gulf brand has been used on anything other than a Monaco.

The Formula 1 Gulf is based on the Grande Date F1 and so uses a 44mm case and is powered by a Ronda 6004B Quartz movement. The watch is available on either a rubber strap, or the bracelet that you see here.

While I think that the Gulf Monaco is a little played out, the stripes do look cool on the F1 and fit well with the rest of the design. I like that the bezel echoes the shape of the original series, but is a step up in quality. The only part of the design that I’m not sure about is the black crown guards, which  sit almost like a “flying buttress”- a standard integrated steel guard would look better in my view. 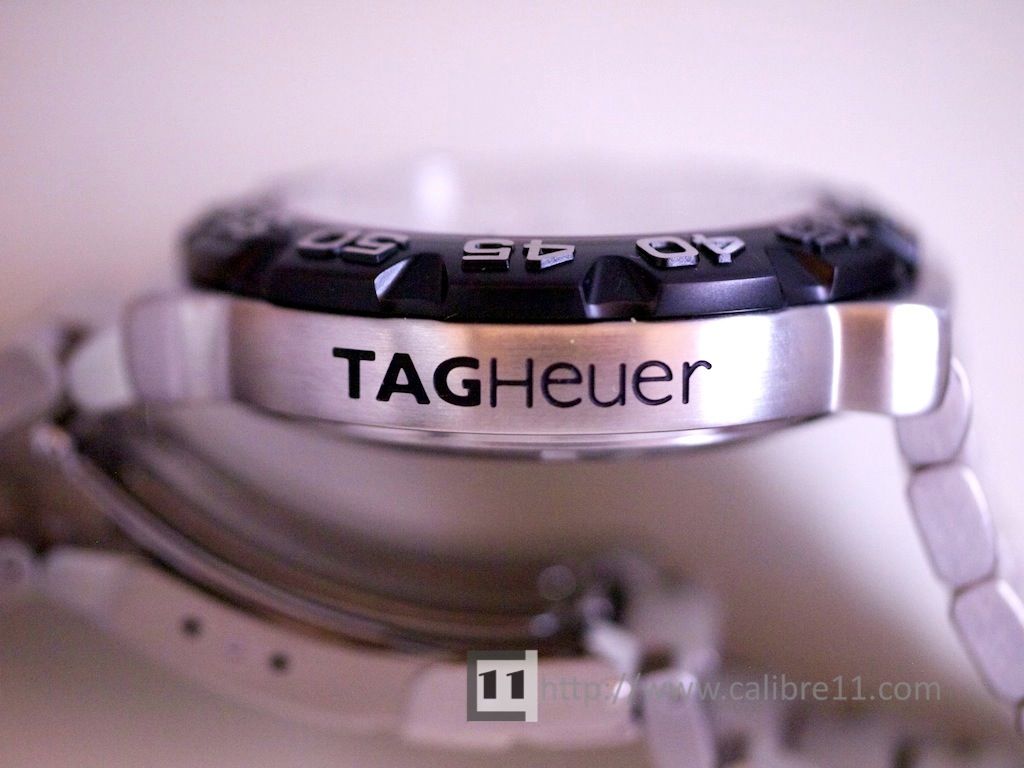 Lets get the bad news out of the way first- as I understand it, the F1 Gulf won’t be available in the US, Spain or Portugal. For other markets, expect the watch to be available in Q4 2011, with a price of around A$1300 in Australia. 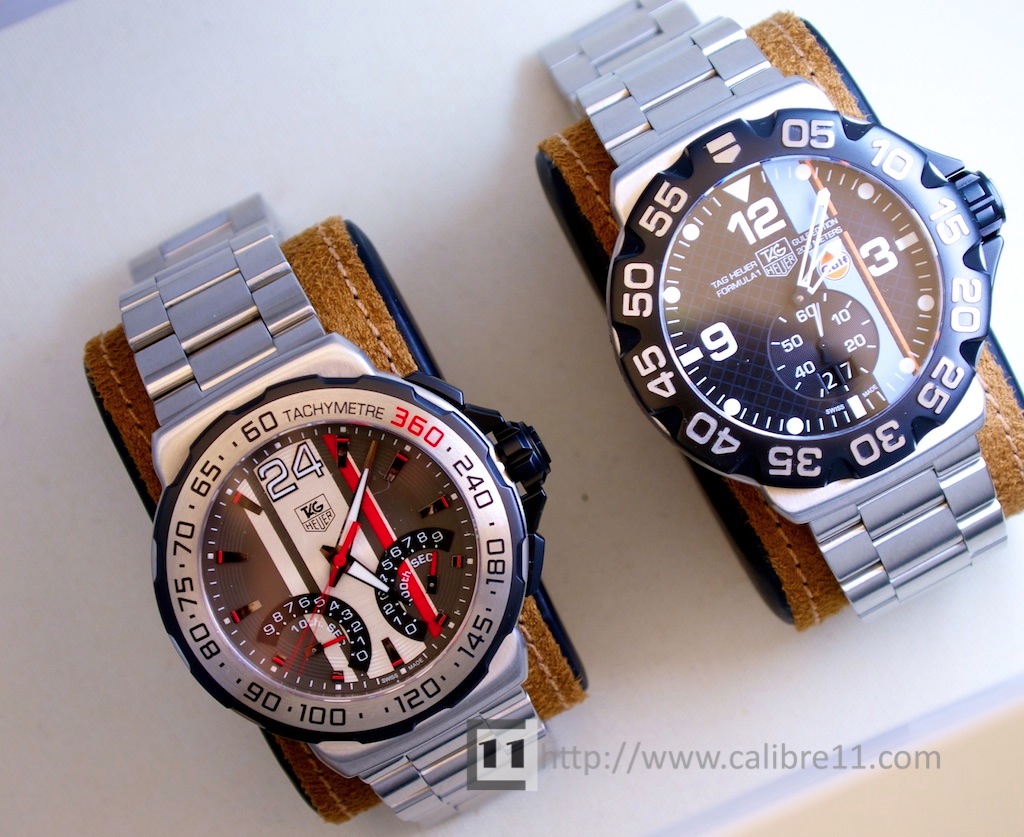 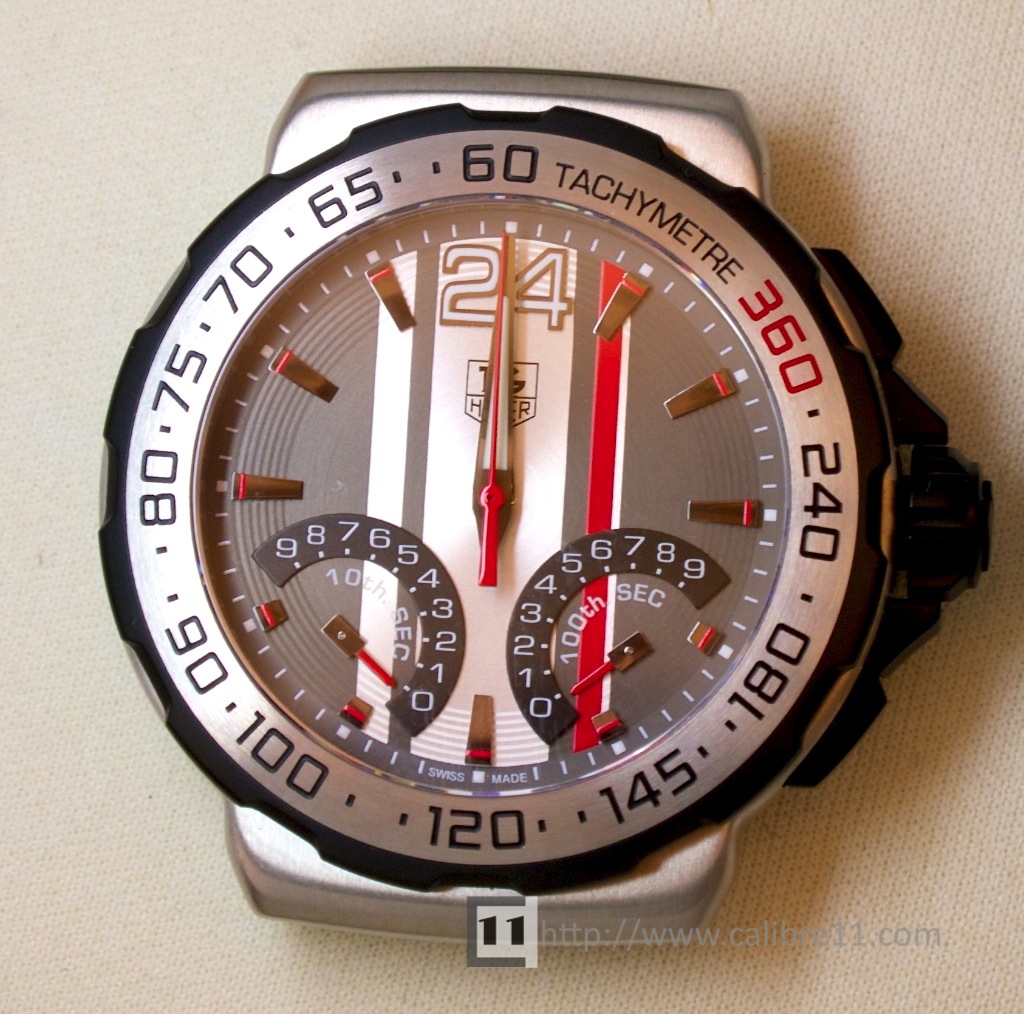 Next up is another striped F1- this time a Calibre S Chronograph.

This is the first time that I’ve reviewed any watch with the Calibre S movement- and does offer a very interesting alternative to a standard quartz movement. Pressing the crown changes to the watch to from Time/ Date mode to Chronograph mode, with the hands moving to the positions that you see above. As you press the top Chrono. button to start timing, you only see the central second hand move. When you press the top button again top stop timing, the two sub-dial hands move into place to indicate the 1/10th of a second (left-hand register) and 1/100th of a second (right register). 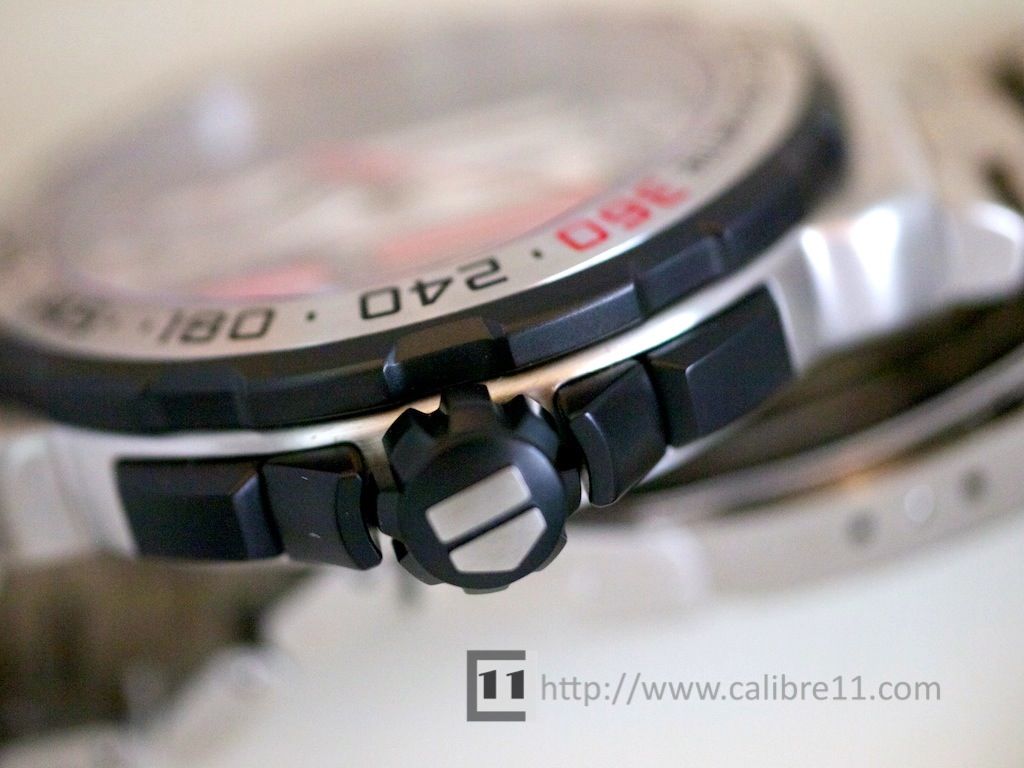 When the watch is in Time mode, the two registers show the date, with a retrograde perpetual calendar. By its nature the Calibre S is a quasi-retrograde date function (“Retrograde” usually means that instead of a date wheel completing a full 360 Degree rotation, it instead goes through 180 degrees and then flies back) and “Perpetual” means that the calendar takes into account the days of each month, including leap years.