The current Formula 1 series was launched in 2012 and represented a more sober, mature design than the original series of 1986 which was seemingly available in every colour of the rainbow. 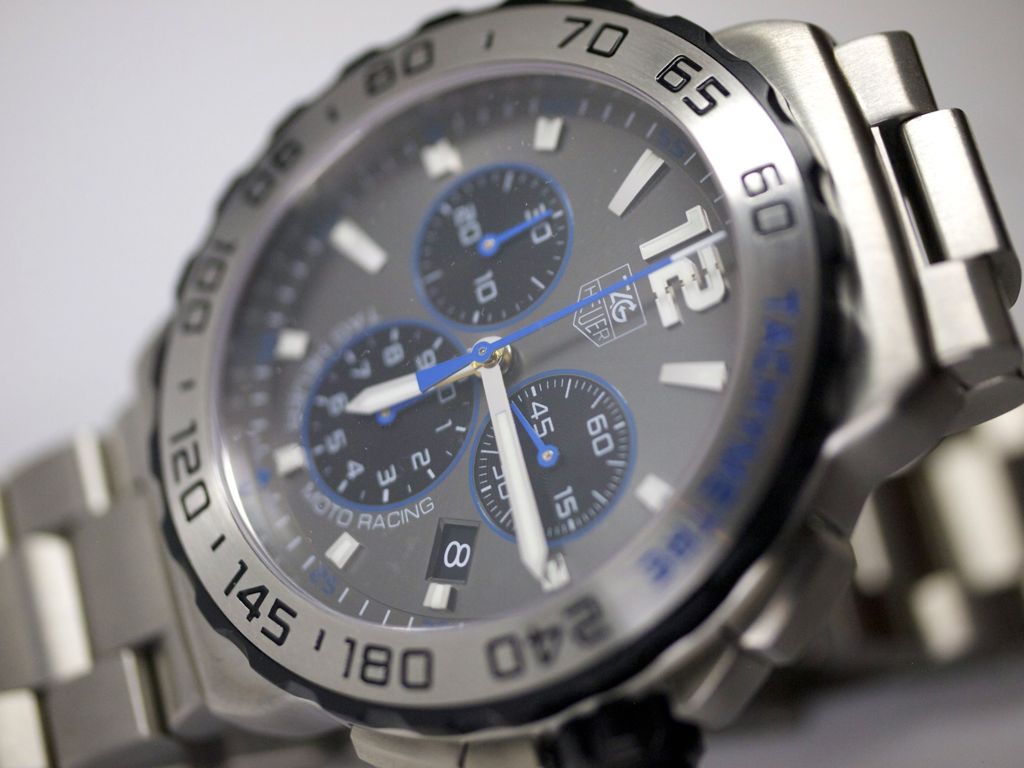 While the FIM edition doesn’t differ significantly from other Chronograph models in the Formula 1 range, this is the first opportunity that we’ve had to spend a week with any model in the current Formula 1 series. 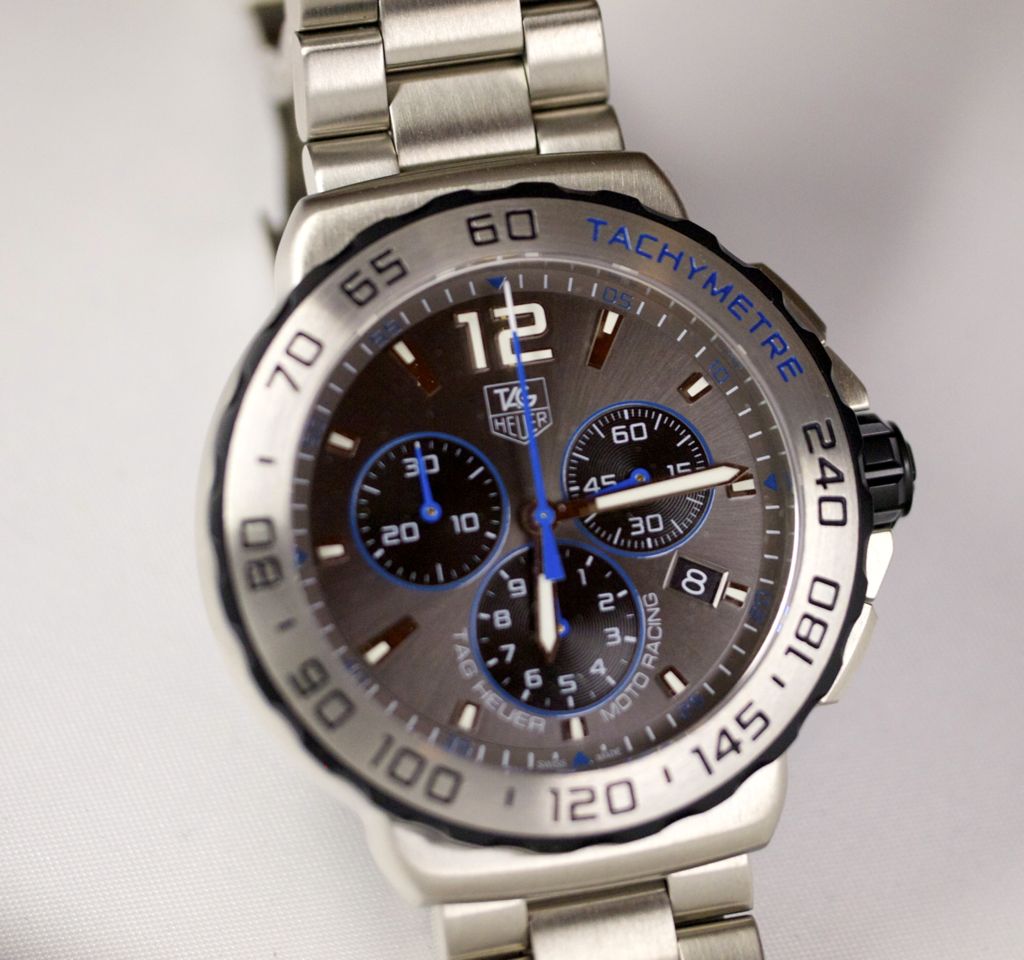 The Formula 1 is one of the most discussed models in the TAG Heuer range, partly because the series continues to offer quartz movements across the board, somewhat of a contrast to the advanced mechanical movement strategy that TAG Heuer is pursuing with other series. But this quartz-only approach is about to change as TAG Heuer introduce a mechanical movement in the men’s Formula 1 series for the first time. 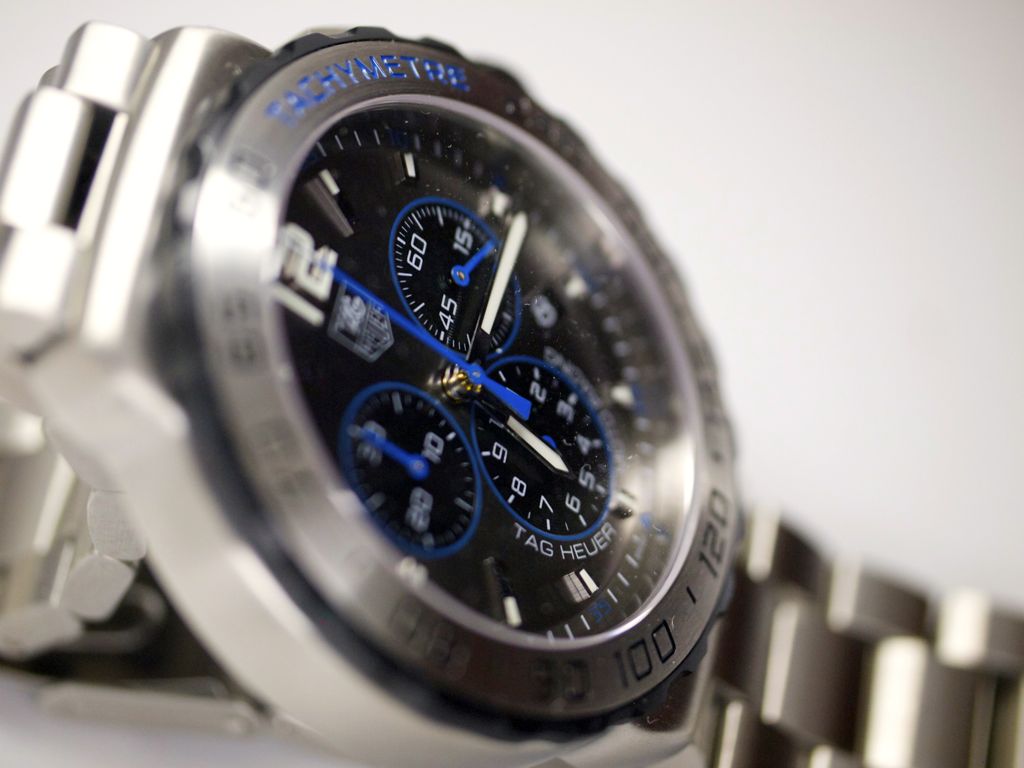 All models in the Formula 1 series now use the same 42mm stainless steel case, with a variety of bezels and dial colours offered to differentiate the various models.

The Formula 1 FIM is based on the Steel & Ceramic Formula 1 (Ref. CAU1115, shown below). The FIM watch loses the ceramic bezel and bracelet, instead opting for an all-steel finish. 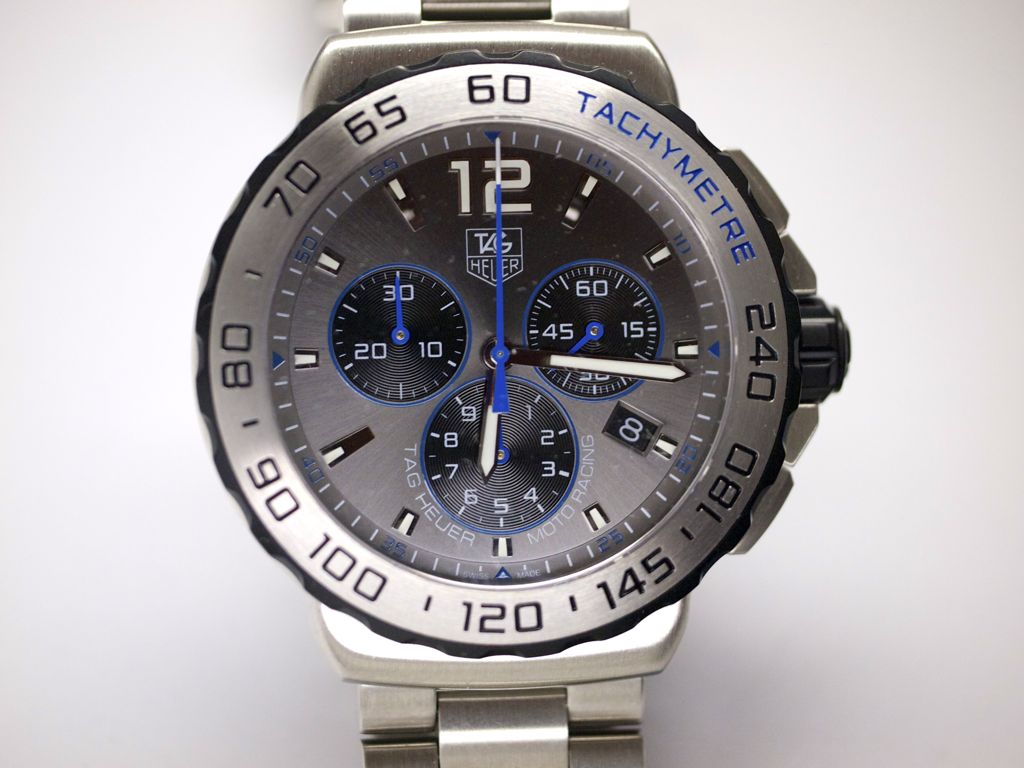 While the Formula 1 series has changed significantly since its launch in 1986, the case of the 2013 model stays true to the original shape. The watch is a very professional design- well finished and neat, even if it lacks some of the bolder design elements of the previous models. Isn’t the Formula 1 supposed to be a little more adventurous?

One piece of the design that works very well is the integration of the chronograph pushers and the crown guard (see below). 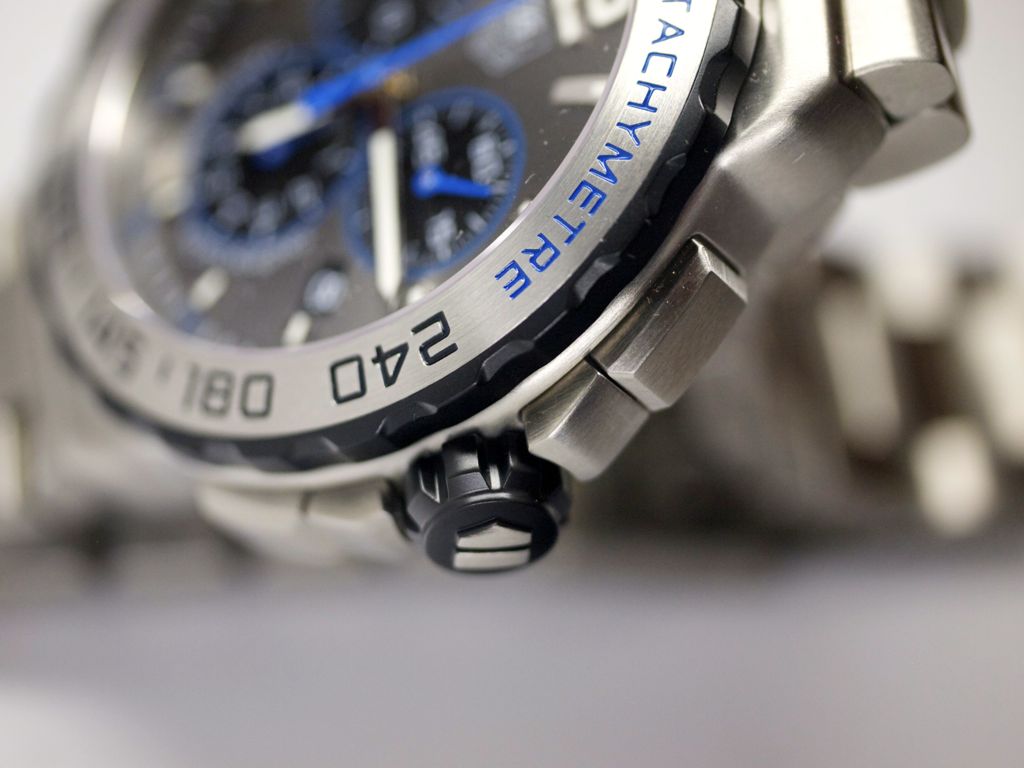 The quality of the finish and the overall feel of the watch is a step ahead of the previous Formula 1 series, although it doesn’t feel up to the standard of say a Carrera…not that you would expect it would given the large price difference between the Formula 1 and the Carrera. 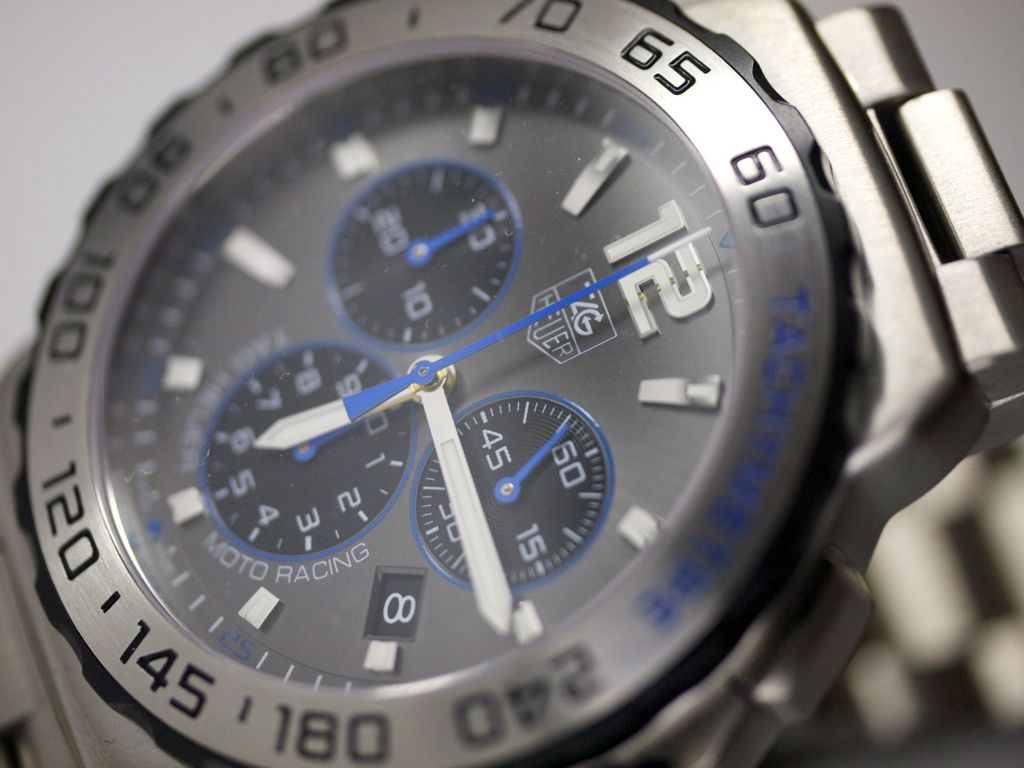 Like the other Chronograph models in the Formula 1 range, the FIM edition uses the quartz Ronda 5040 movement. 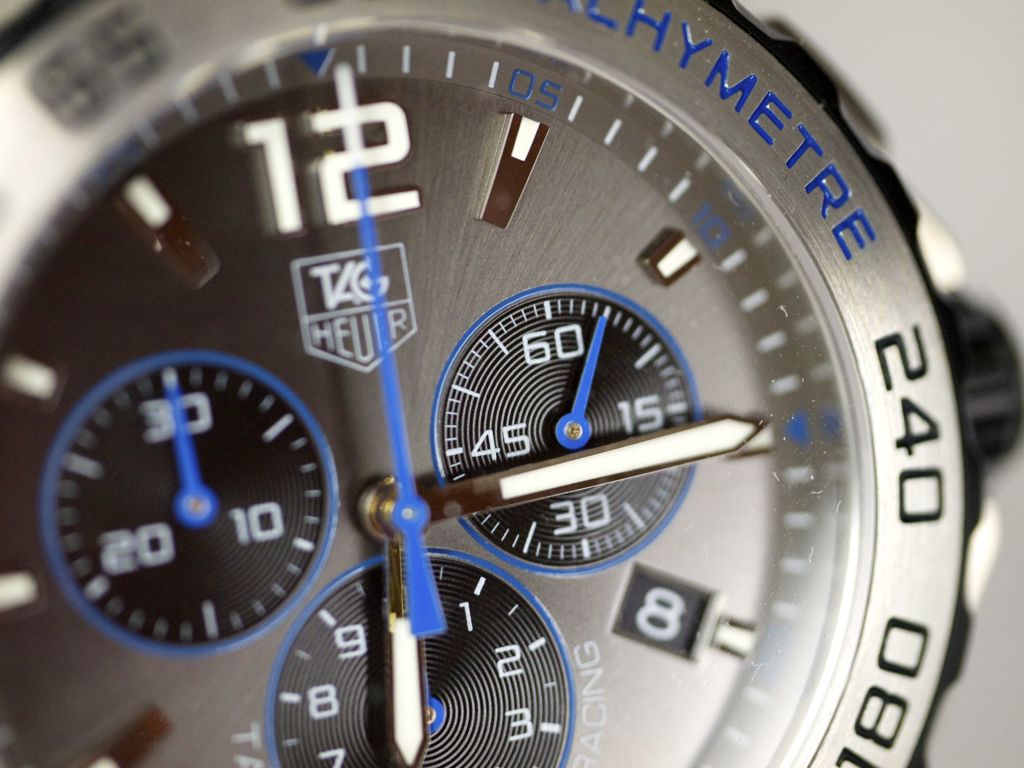 The stand-out feature of the FIM Formula 1 Chronograph is the blue accents on the dial- seen on the inner minuterie flange, sub-dial rings and hands. It’s a different look to the usual red highlights and works well with the starburst anthracite dial.

Keen observers will note that the name “Formula 1” doesn’t appear on the dial- instead the 6 o’clock sub-dial has “TAG Heuer Moto Racing”. 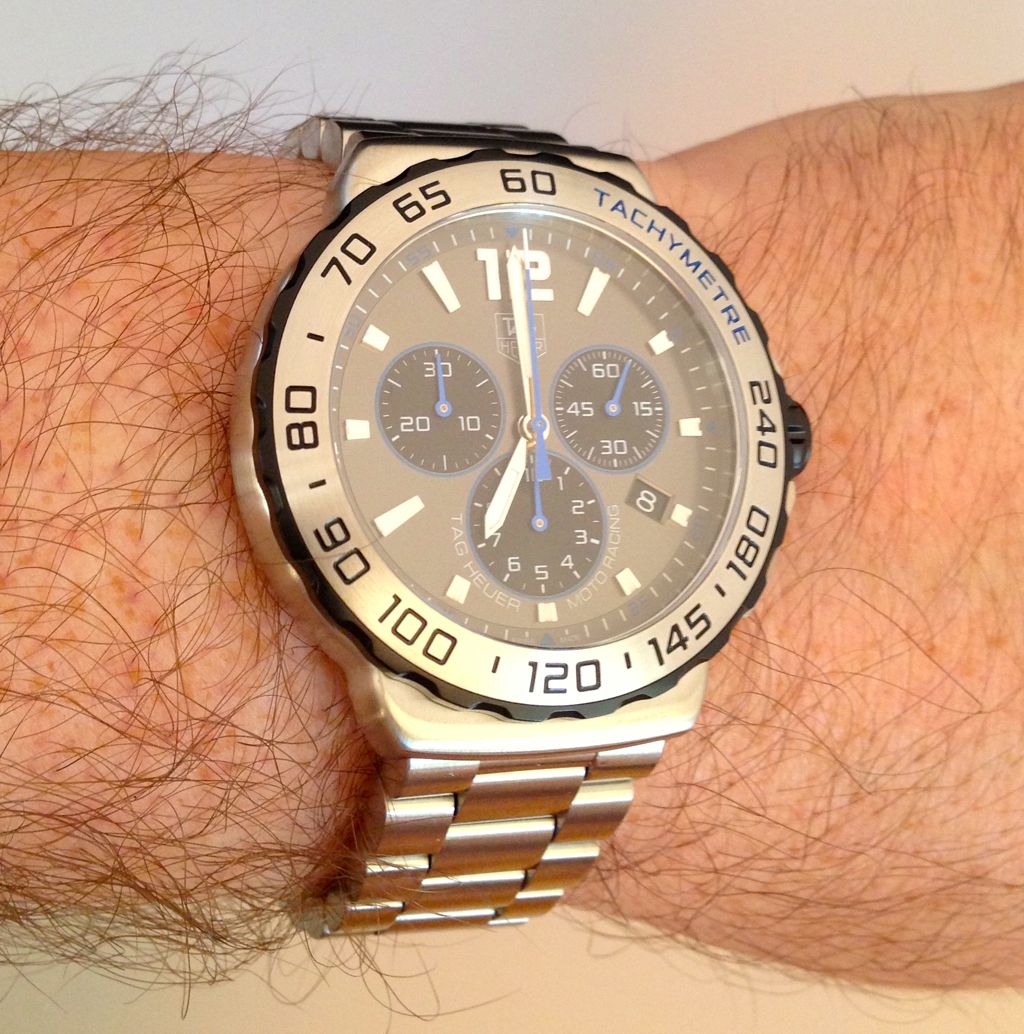 The Formula 1 Chronograph looks very good on the wrist- I especially like the contrast of the Black bezel grip and Crown with the stainless steel case. 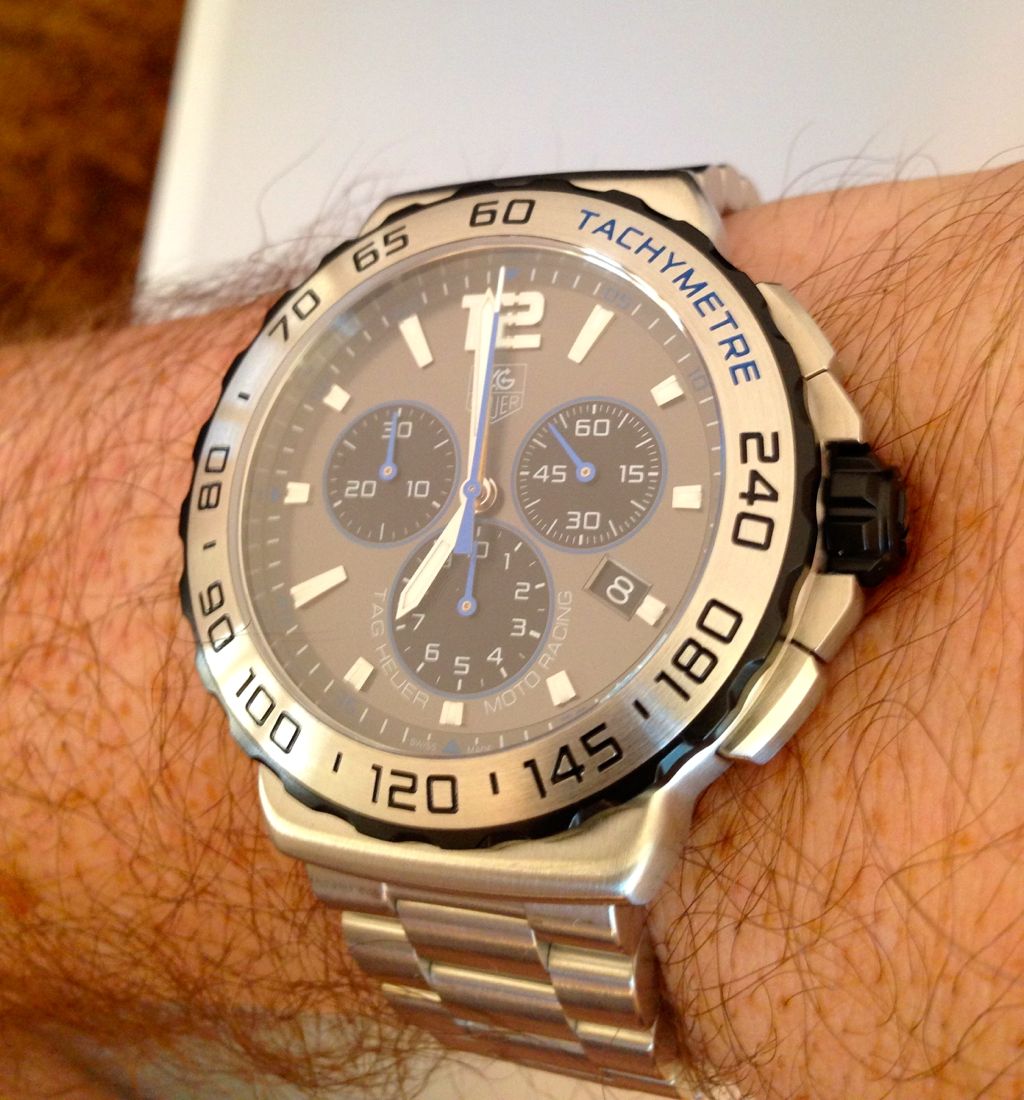 The blue contrasts are not always obvious- sometimes blending in with the anthracite dial as in the photo above. It’s a more subtle colour combination that using Red and one that TAG Heuer is using more in 2013 (for example, the Aquaracer Calibre 72). 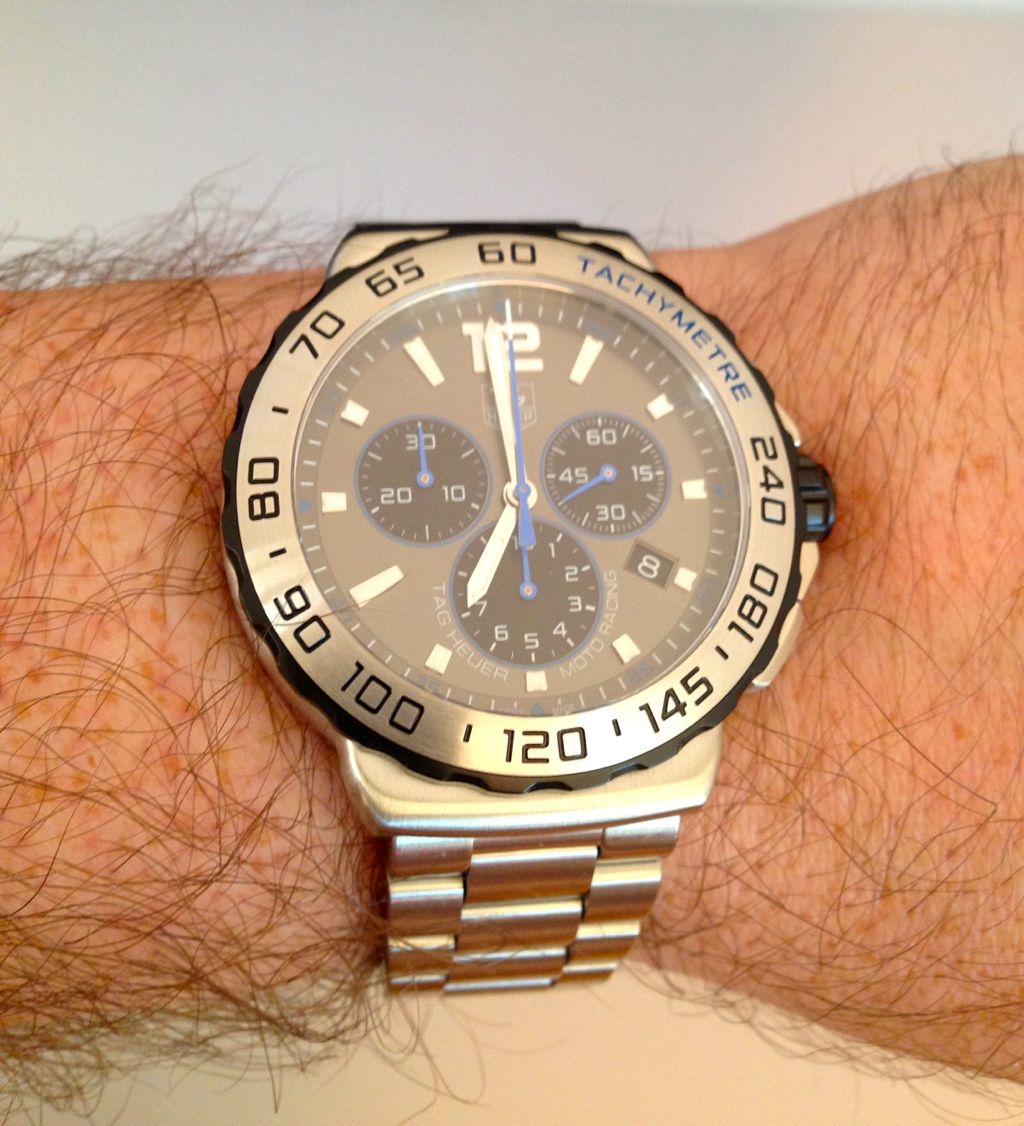 What’s Next for the Formula 1? 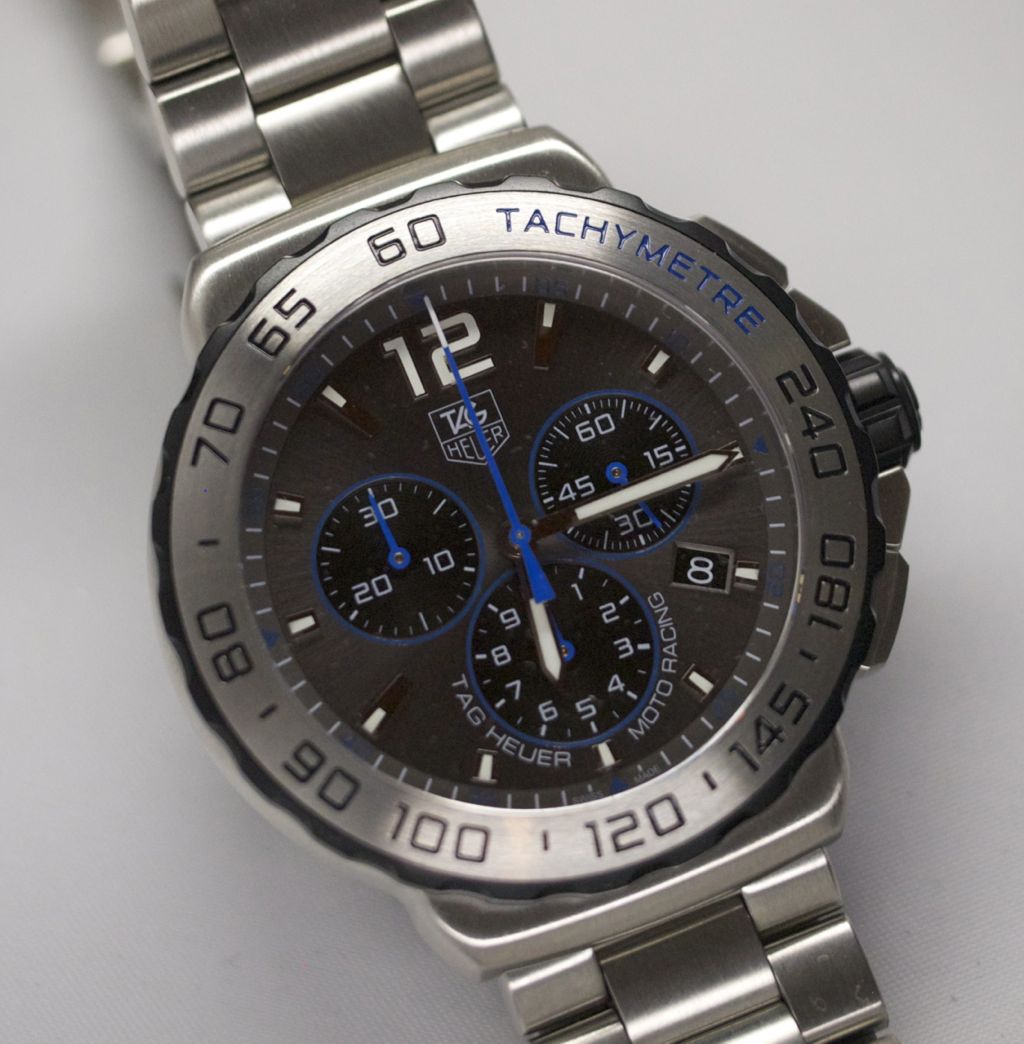 Regular readers will know that we’d rather see the Formula 1 stay quartz-only, but to step up the technology in the movement. Today’s quartz watches are nothing like the low-cost movements of the 1980s. What about a solar-powered watch that maintains accuracy 100% via radio waves from an atomic clock? GPS locator? Altimeter? Perpetual calendars? Pulse meters? All of this technology is possible in a quartz watch, and many of these features have a nice link with the type of technology used in Formula 1.

But, most watch buyers believe that quartz = cheap, hence the move to offer a mechanical option. Stay tuned for the Calibre 16 Formula 1, which will be offered in a larger, 44mm case. 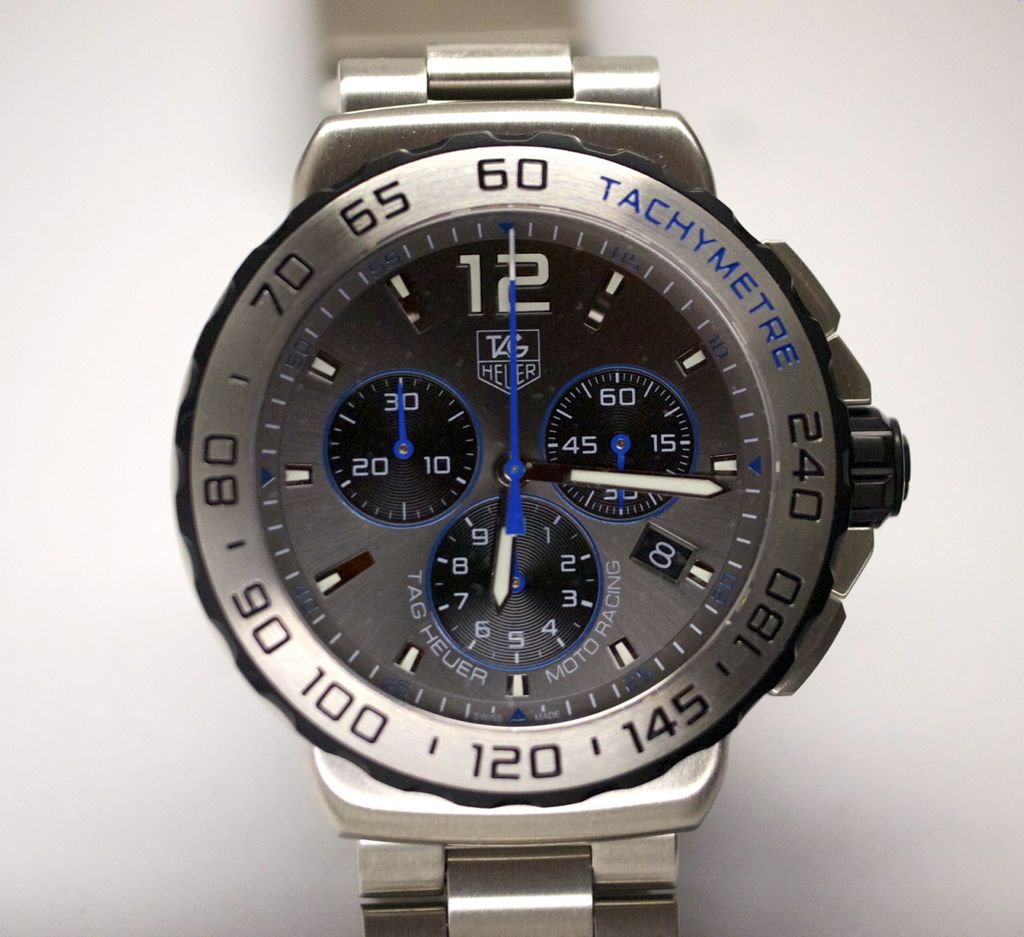 The TAG Heuer Formula 1 FIM Chronograph is already available at a recommended price of A$1,995 in Australia and CHF 1, 750 in Switzerland. If you’re looking at the F1 Chronograph, the FIM edition offers a distinctive option thanks to its blue colour-scheme.

And for those who believe that Swiss watches should be mechanical, check back in a few weeks for a look at the first men’s automatic Formula 1. 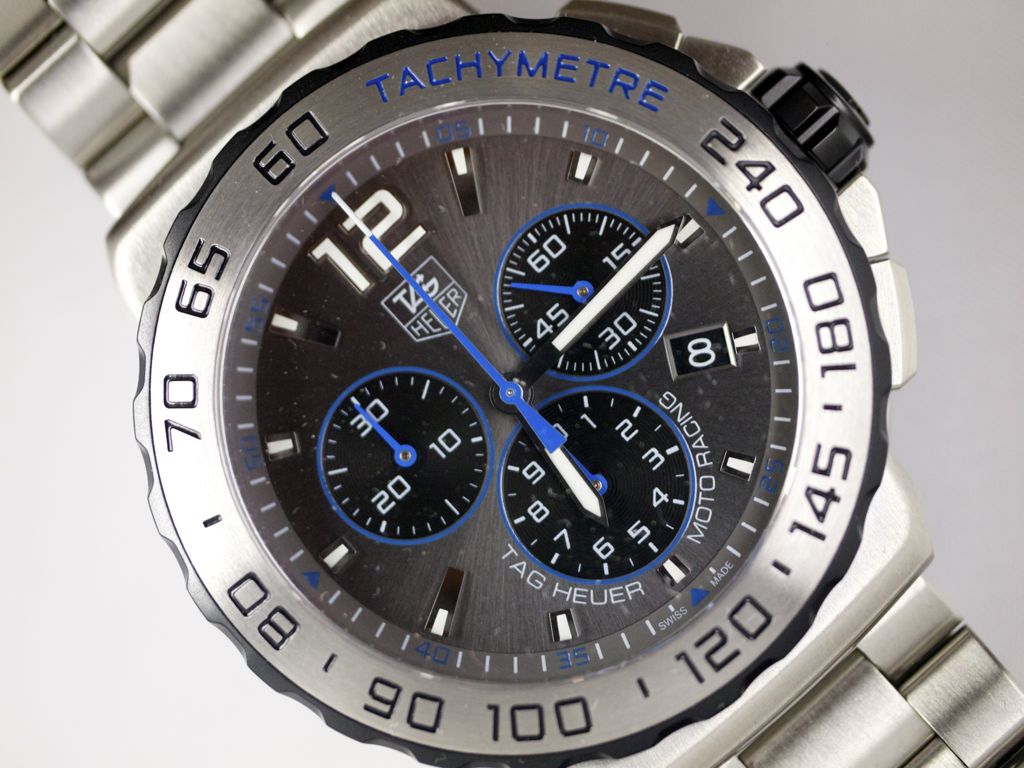