Following on from the “full-black” Twenty Four Gulf, TAG Heuer has released a second version of the Monaco with the floating dial- called the Monaco Twenty Four Racing.

Calibre 11 showed you the first photos of the watch in April, but those were quick shots grabbed through a glass case in Basel- here for the first time are detailed shots of the watch along the rest of the Monaco family. 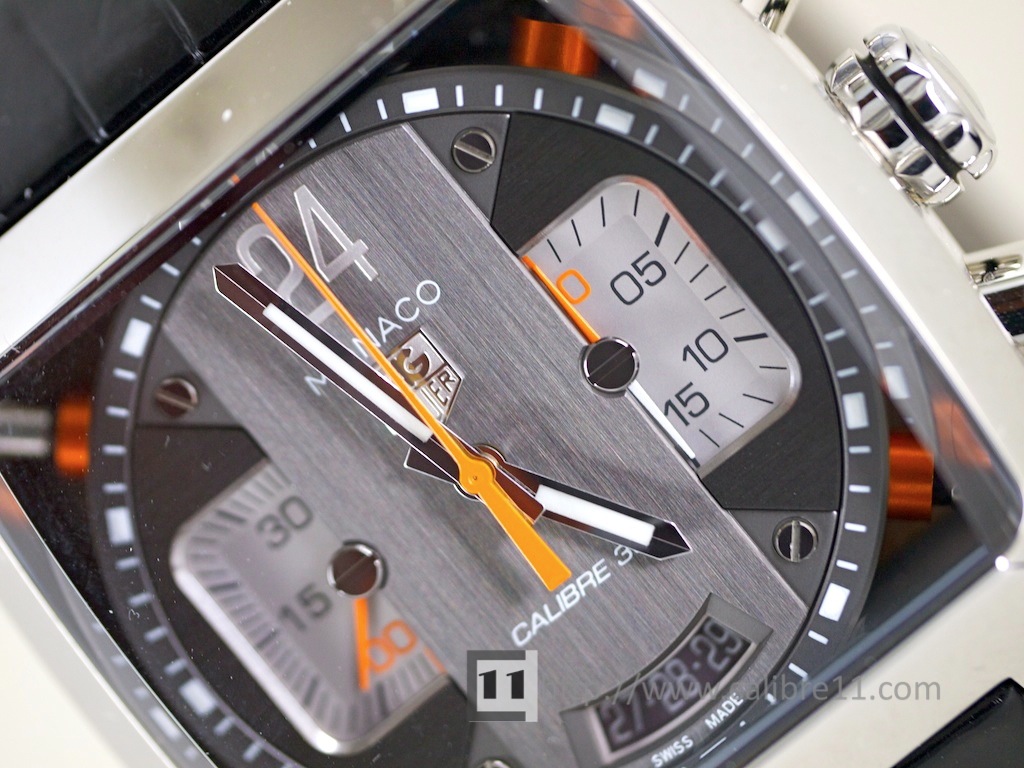 While I love the vintage look of the original Monaco and the re-editions that have followed, to me the watch would stagnated unless a new-look was developed- a design as modern and bold as the original was back in 1969. And there is no doubt that the Twenty-Four fits that description.

The story behind the original Monaco is well known- it was a purposefully “out there” design launched in 1969 to attract attention to the then-new Chronomatic Calibre 11 movement that would power the Heuer range through the 1970s. 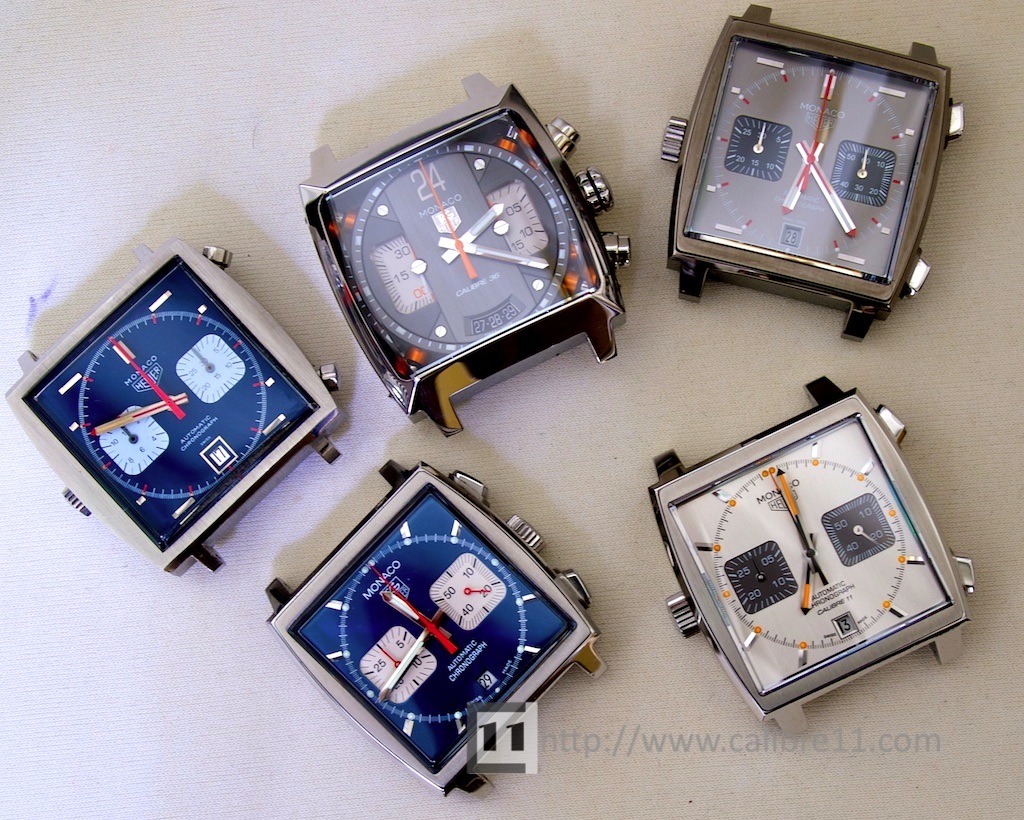 The basic design of the original watch continues on both today’s re-edition model and on the Twenty Four- the square case shape, circular inner “dial”, bi-compax layout and sword-shaped hands.

While the 2011 Calibre 11 (centre below) is faithful to the original design, the Twenty-Four simply takes the key character of the watch and wraps them into a modern design. 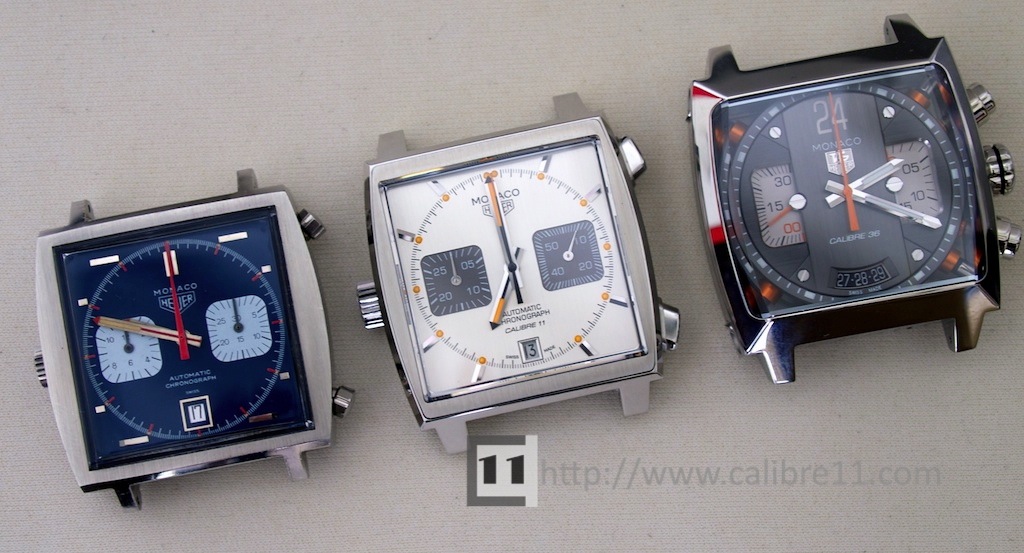 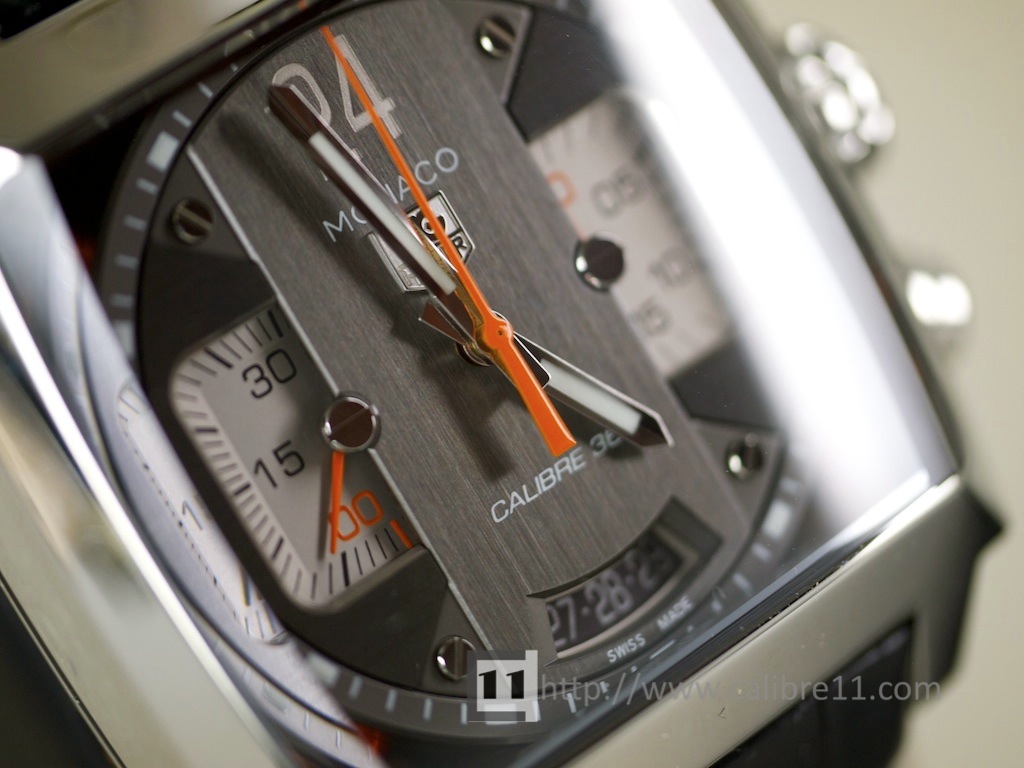 The Twenty-Four Racing (Reference CAL5112.FC6298) is essentially the same watch as the 2010 Monaco 24 Gulf, but with a stainless steel case (40.5mm) and a different colour dial.

It’s not an overly large watch- 40.5mm- but it does wear larger than that due to the thickness of the case. The leather strap is reinforced where it meets the lugs, meaning that the watch doesn’t feel too top-heavy. 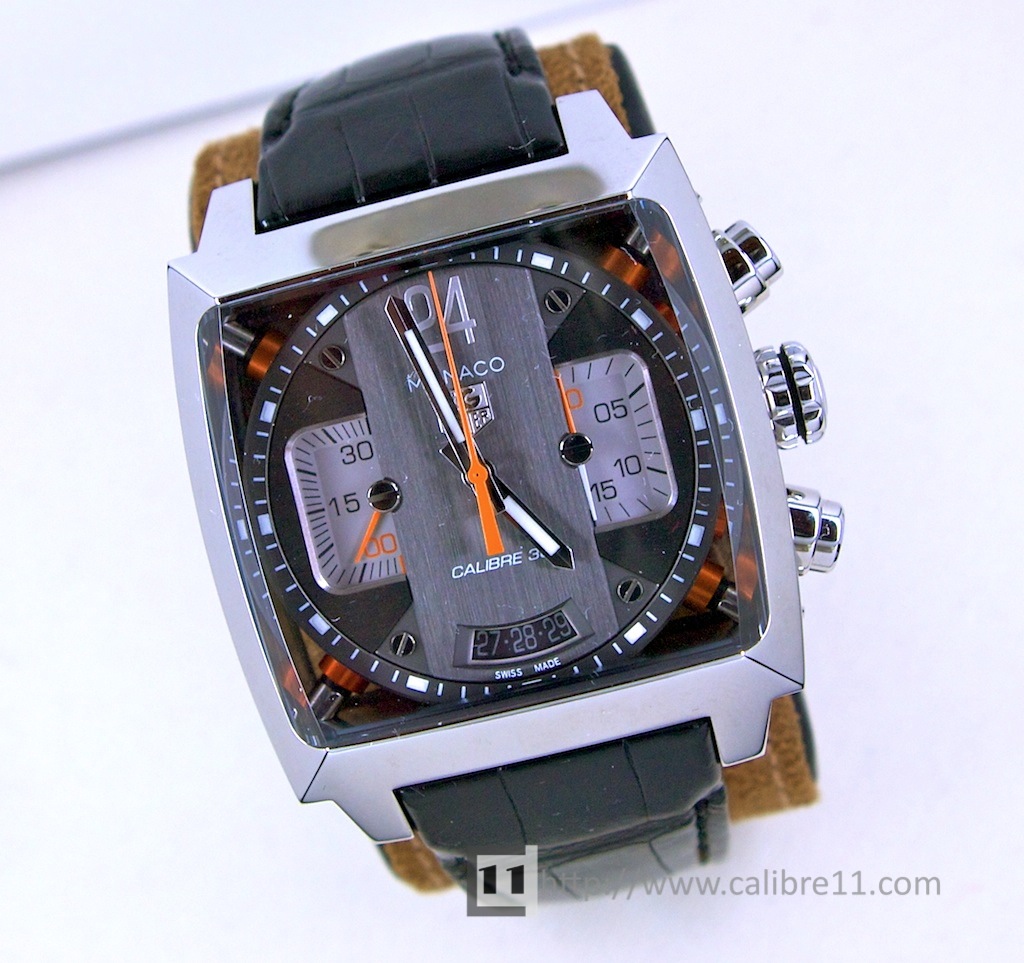 The dial is an anthracite (Grey/ Silver) colour with a fantastic grained finish on the central section of the dial.

I love the subtle orange highlights used to bring a splash of colour- the “shock absorbers”, the Central chronograph hand and “half” of the sub-dial hands are finished in the same Orange colour. 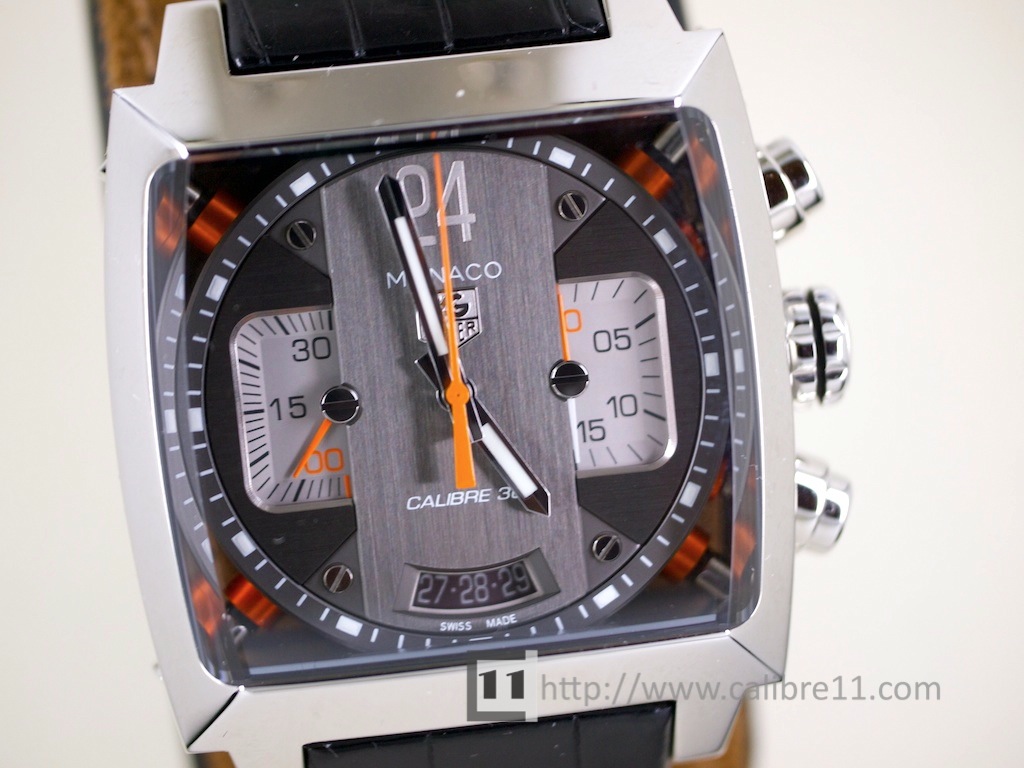 The reverse side of the strap is also finished with an Orange rubber material and stitching. As regular readers will be sick of me saying, while the strap is perfectly nice, I don’t think that Crocodile leather is the right material for the strap- it’s just not high-tech and sporty enough to match the rest of the watch. 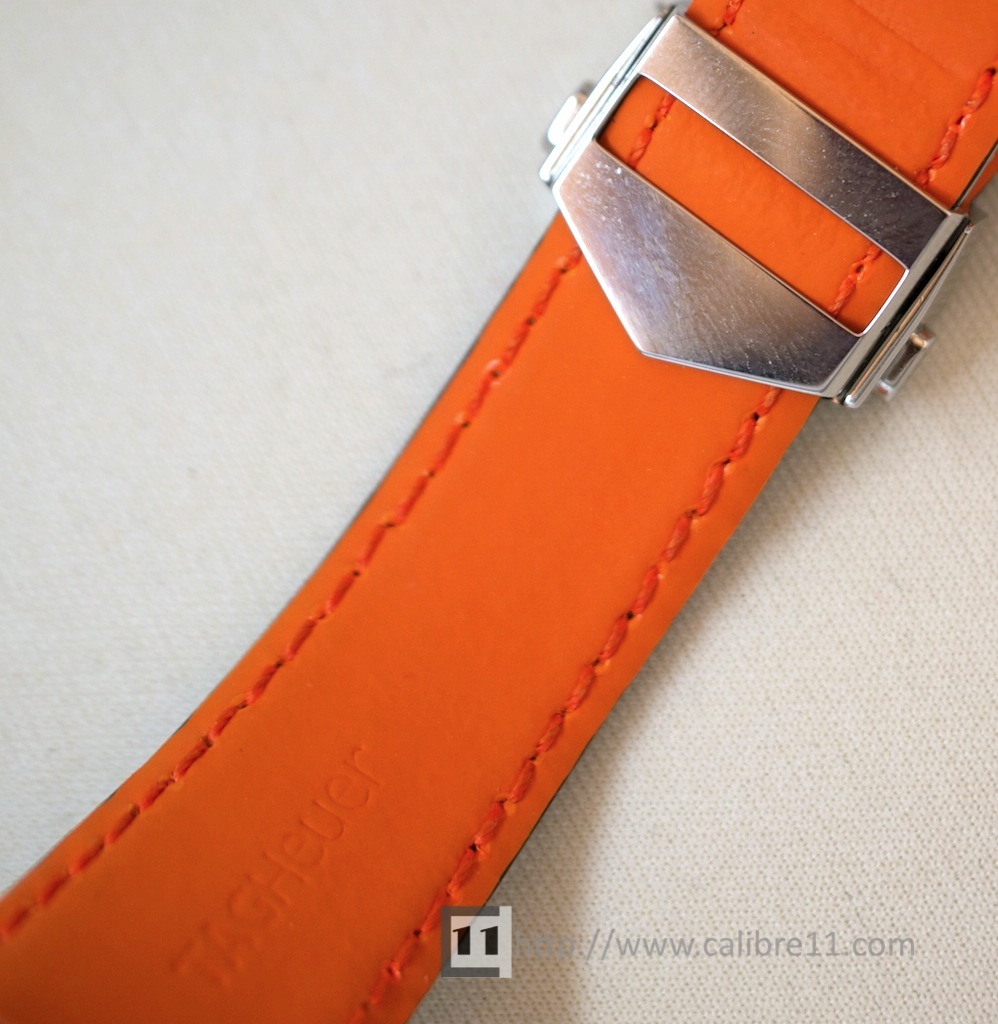 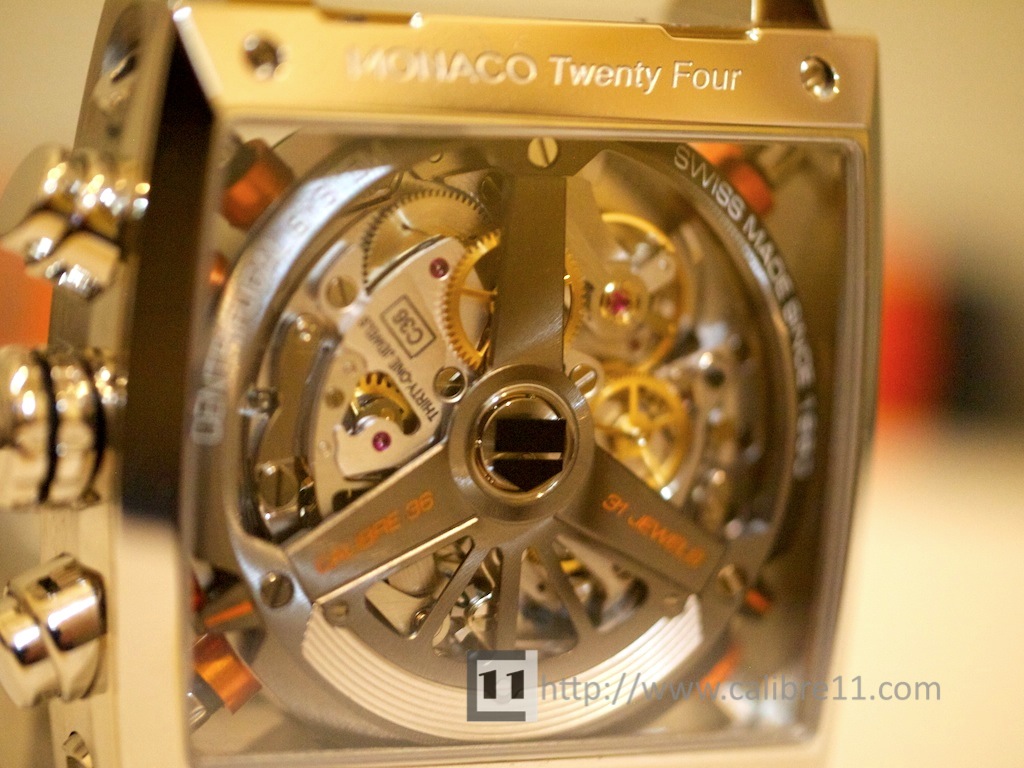 The Twenty-Four Racing uses the Calibre 36, which is an El Primero movement sourced from Zenith. TAG Heuer add the unique rotor and shock absorbers to make the movement as much of a feature of the watch as the dial. Normal clear-casebacks, such as the Monaco Calibre 11 below right, look great, but have nowhere near the impact as the “widescreen” caseback of the Twenty-Four. 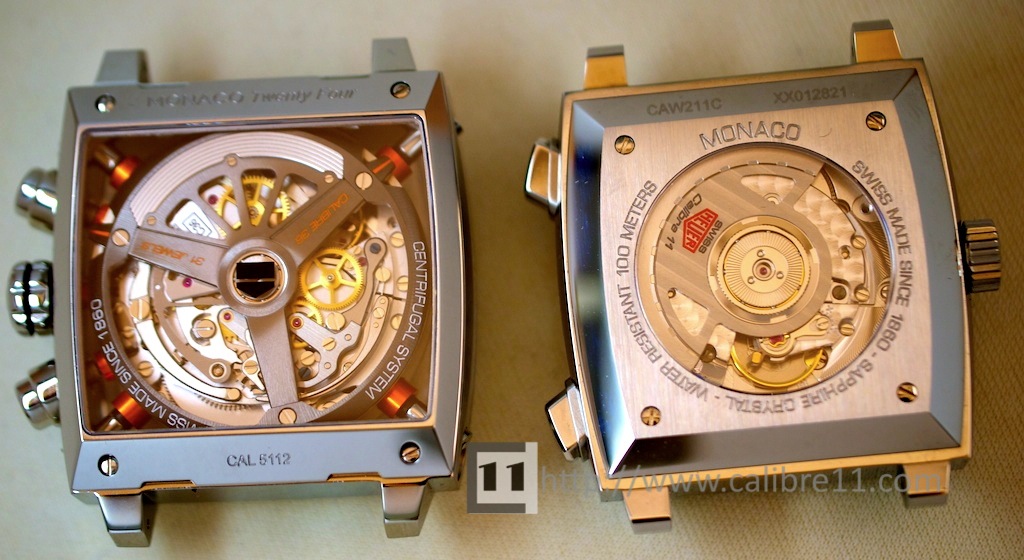 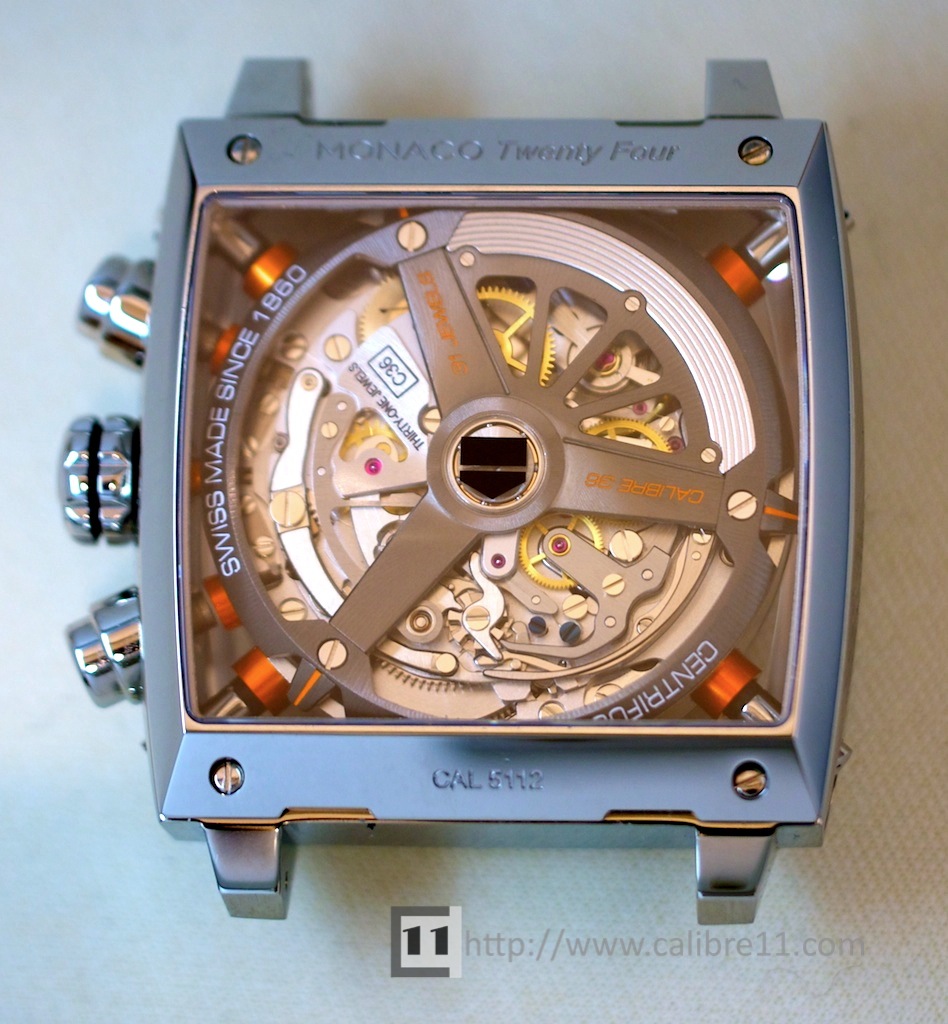 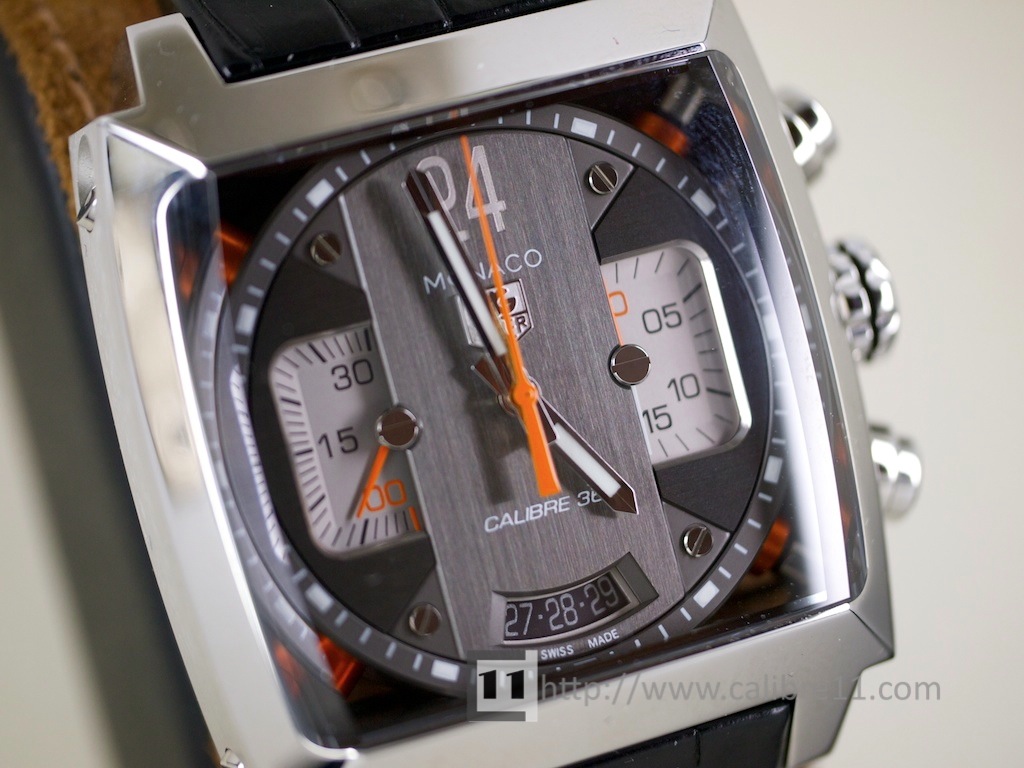 The Monaco Twenty-Four Racing will be available from November 2011 with an Australian price of around A$15,000- which is in line with last years’ Twenty-Four Gulf.

Also like the Twenty-Four Gulf, the Racing will not be a numbered limited edition, but will only be made in small numbers. 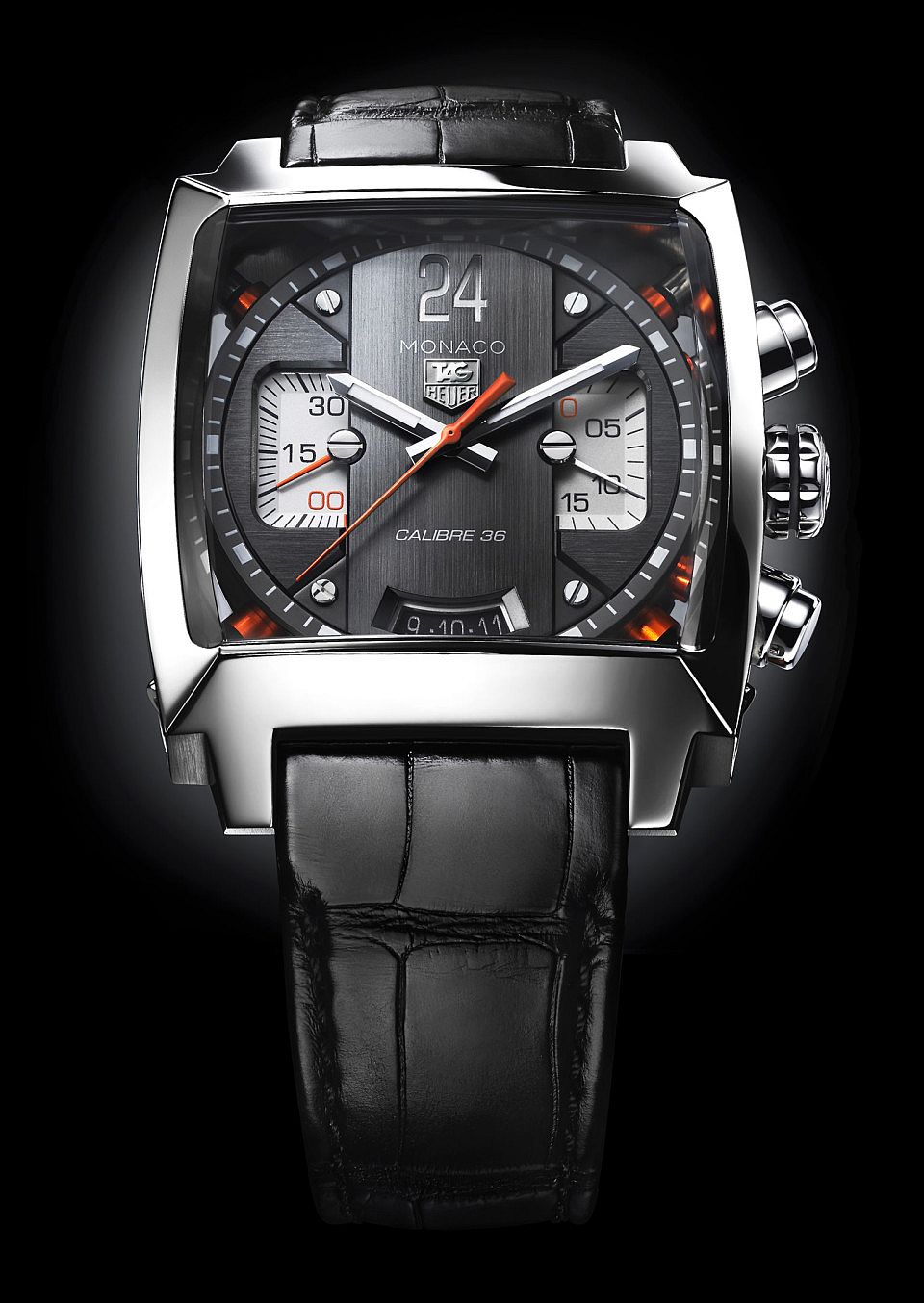 The Twenty-Four Racing has a different character to the Gulf model- its a lot more subdued that the Black and Striped Gulf version- which some people will like, and some won’t- it’s more my style than the Gulf version.

But irrespective of the colours, the basics of the Monaco 24 remain- a fantastic case design with its unique floating dial, wrap-around crystal and exposed movement. It’s an expensive watch, but you do get something very different to the standard model, plus you get the fantastic Calibre 36 movement.