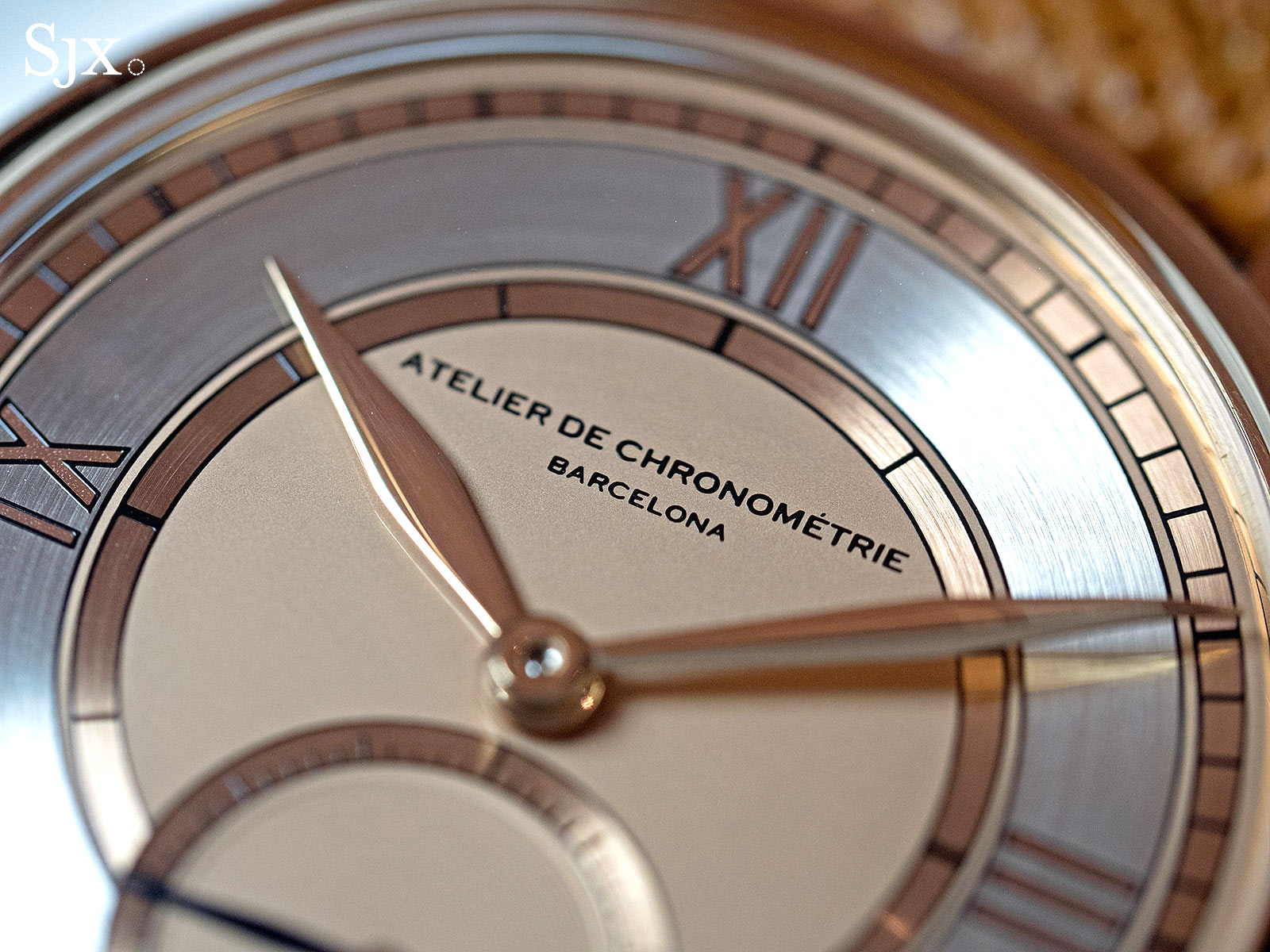 A two man operation comprised of vintage watch dealer Santiago Martinez Rajasa and watchmaker Moebius Rassmann, Atelier de Chronométrie makes only two or three watches a year. Having made its debut last year with the AdC #1 wristwatch, the Barcelona-based brand has elaborated on its original premise of rebuilding and enhancing the 1960s Omega calibre 30 movement, now offering variations with an indirect centre seconds or redesigned movement bridges.

While the first Atelier de Chronométrie timepiece was time-only with a subsidiary seconds at six because of the Omega calibre 266 inside, the Atelier de Chronométrie AdC #2 is equipped with a movement based on the Omega calibre 283, essentially the same calibre with an indirect seconds. Best known for being used in the “Broad Arrow” ref. 2777 made for the Royal Air Force in the 1950s, the original calibre 283 was a robust, no-nonsense movement built to keep good time, with the centre seconds for easy time measurement.

Atelier de Chronométrie’s version of the movement is dressed to the nines, retaining the basic architecture of the vintage movement but with most of its substantive parts made fresh from scratch. A total of 35 components are produced by Atelier de Chronométrie, including all the bridges, which are now German silver instead of brass. That includes the bridge for the seconds train, which is long, elegantly shaped and carrying two jewels, replacing the short, functional original that only had a single ruby.

Other components produced by Atelier de Chronométrie include the free-sprung balance wheel with four weights for regulation as well as the winding click.

And all parts that are original to the 50-year old calibre 283 have been finished by hand to an appreciably high standard, with black polishing on the barrel and ratchet wheels, and blued steel screws.

In keeping with its house style, the case and dial channels mid 20th century watchmaking in both design and substance. The dial is a glossy black lacquer with raised, granular print in gold, just as on vintage watches with “gilt” dials. The applied numerals and hands are made of pink gold to match the case; the hands are cut and rounded by hand, giving them a substantial but elegant form.

The pink gold case is steel, with soldered lugs and a flat crown, giving it a look and feel typical of the watches that it emulates. Atelier de Chronométrie offers a significant degree of customisation, so the case, dial and even movement can be tweaked to suit the client’s tastes. The AdC #2 is priced at €41,000 in the guise shown above, which is a hefty sum for a time-only wristwatch but a consequence of the tremendous amount of work.

The Atelier de Chronométrie AdC #3 goes even farther back in time, with a style reminiscent of 1930s wristwatches. The dial is three-tone with a striking Art Deco style. Each portion of the dial has a different surface finish, with circular brushing on the tracks for the hour that contrast with the frosted finish on the central portion and narrow bands in-between.

The leaf-shaped hands are also hand-made, with a shape and thickness that cannot be produced by a stamping machine.

Mechanically this is identical to the AdC #1, with the movement inside being built on the Omega calibre 266, but with differently shaped bridges. The escape and seconds wheel now have their own cocks, giving the movement a more appealing and airy appearance, while also providing more components to show off the hand-finishing.

Though the AdC #2 is the same smallish 37.5mm in diameter as the first model, it feels larger thanks to its longer lugs.