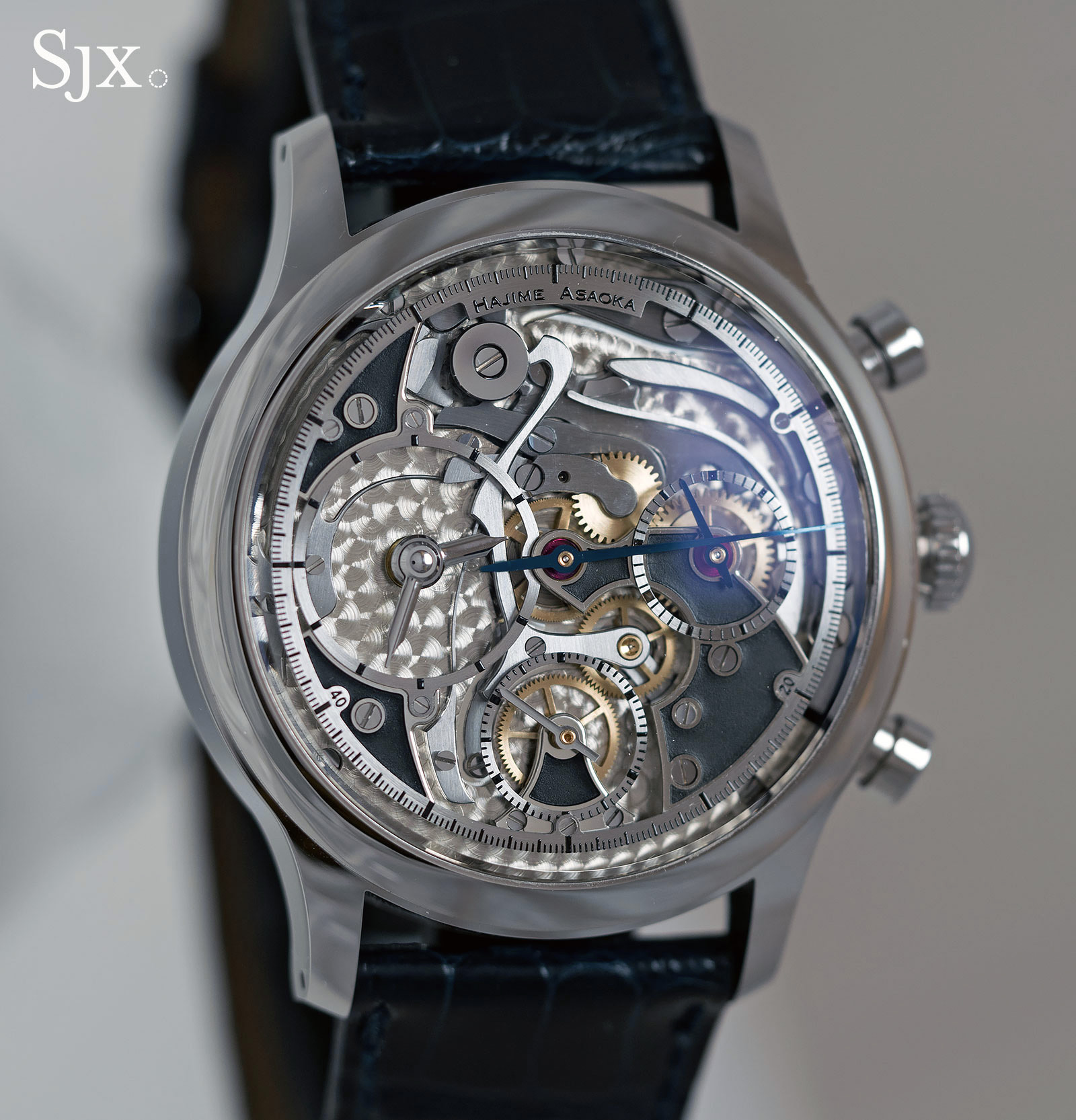 Independent watchmakers that can boast the same is even less, Lang & Heyne and Voutilainen amongst them. So the Hajime Asaoka Chronograph that just made its debut at Baselworld 2017 is notable, especially since Asaoka is a one-man show operating out of a converted residential apartment in Tokyo. 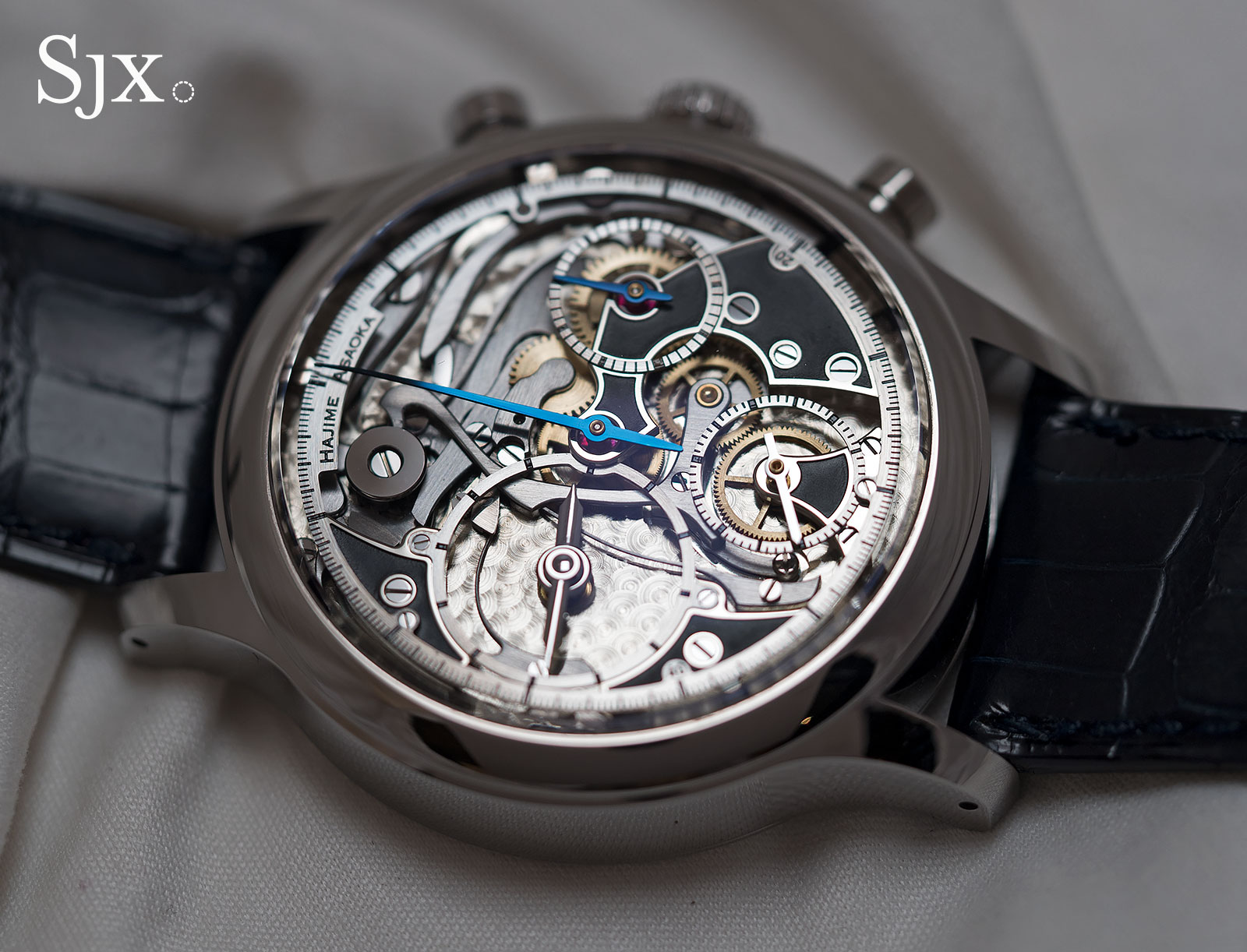 The watch pictured here is a prototype completed just in time for Baselworld, so the movement still has unevenness and rough edges. But Asaoka’s past work illustrates his competence with machining and finishing, so the production version of the chronograph will be beyond reproach.

A modern conception with historical inspiration

The chronograph is the fifth calibre developed by Asaoka, coming after several tourbillons and the time-only Tsunami.

With a case that’s inspired by 1940s and 1950s chronograph (a Rolex ref. 3525 for instance) the chronograph measures 38mm wide and about 11mm high. Inside is a hand-wound calibre with a 40-hour power reserve, which has the chronograph mechanism on the face and an extremely large balance wheel on the back. 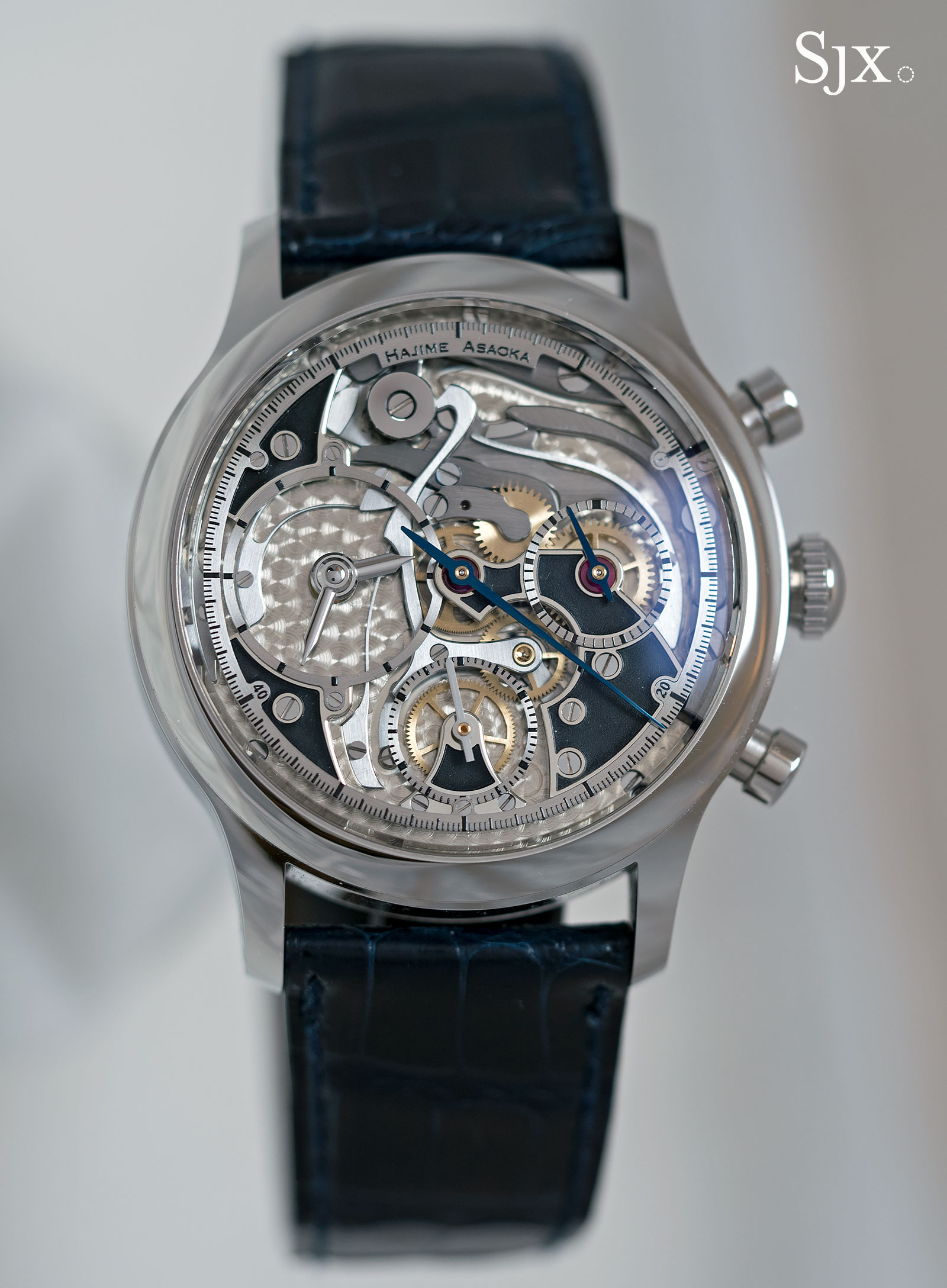 Time is displayed on the sub-dial at nine o’clock, with constant seconds at six. Elapsed seconds are recorded by the central hand, and minutes in the register at three. There is no dial on the front, just steel rings for each of the displays, and bridges for the chronograph mechanism that have been filled with matte black lacquer. The resulting look is strikingly three-dimensional. 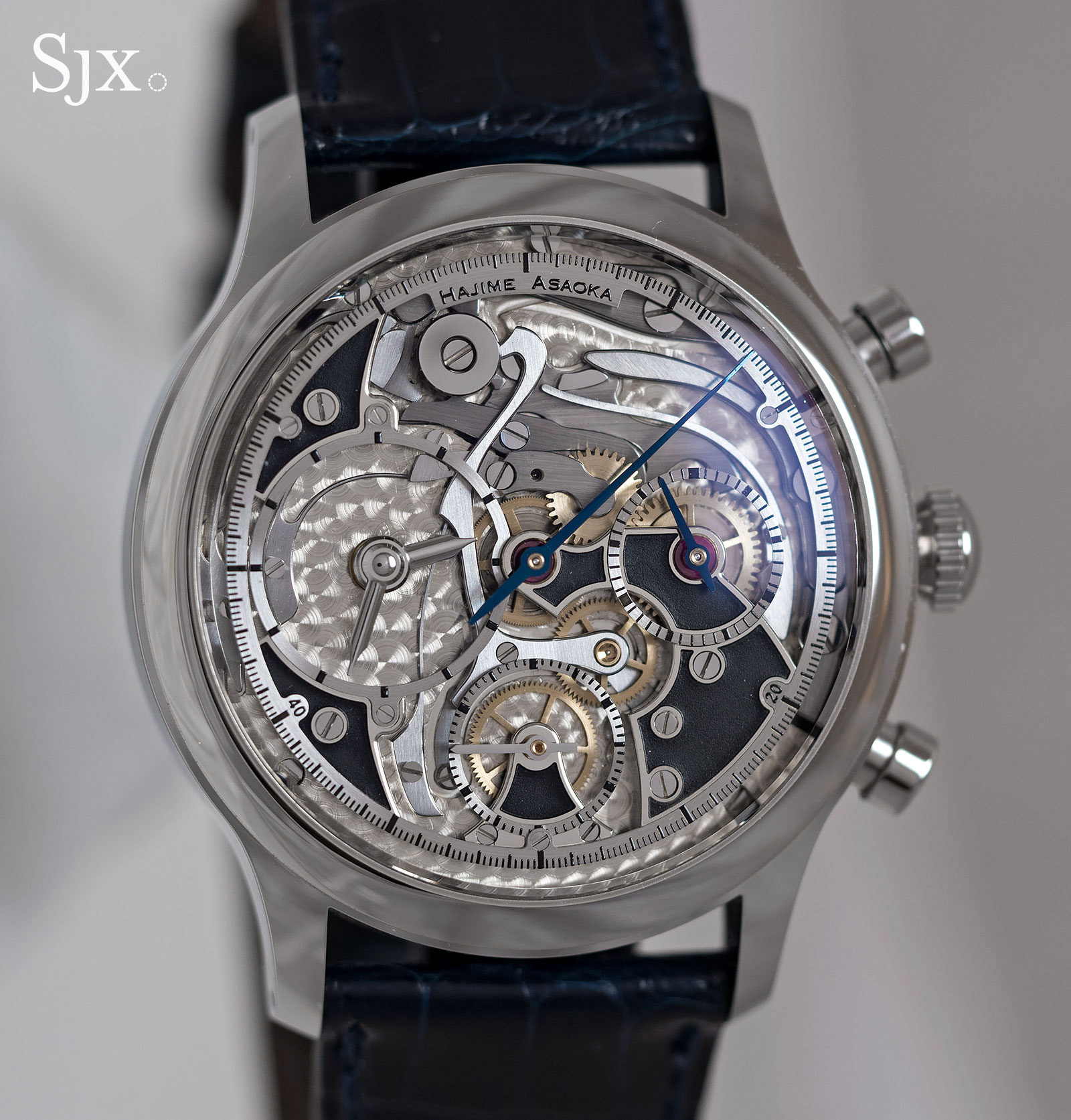 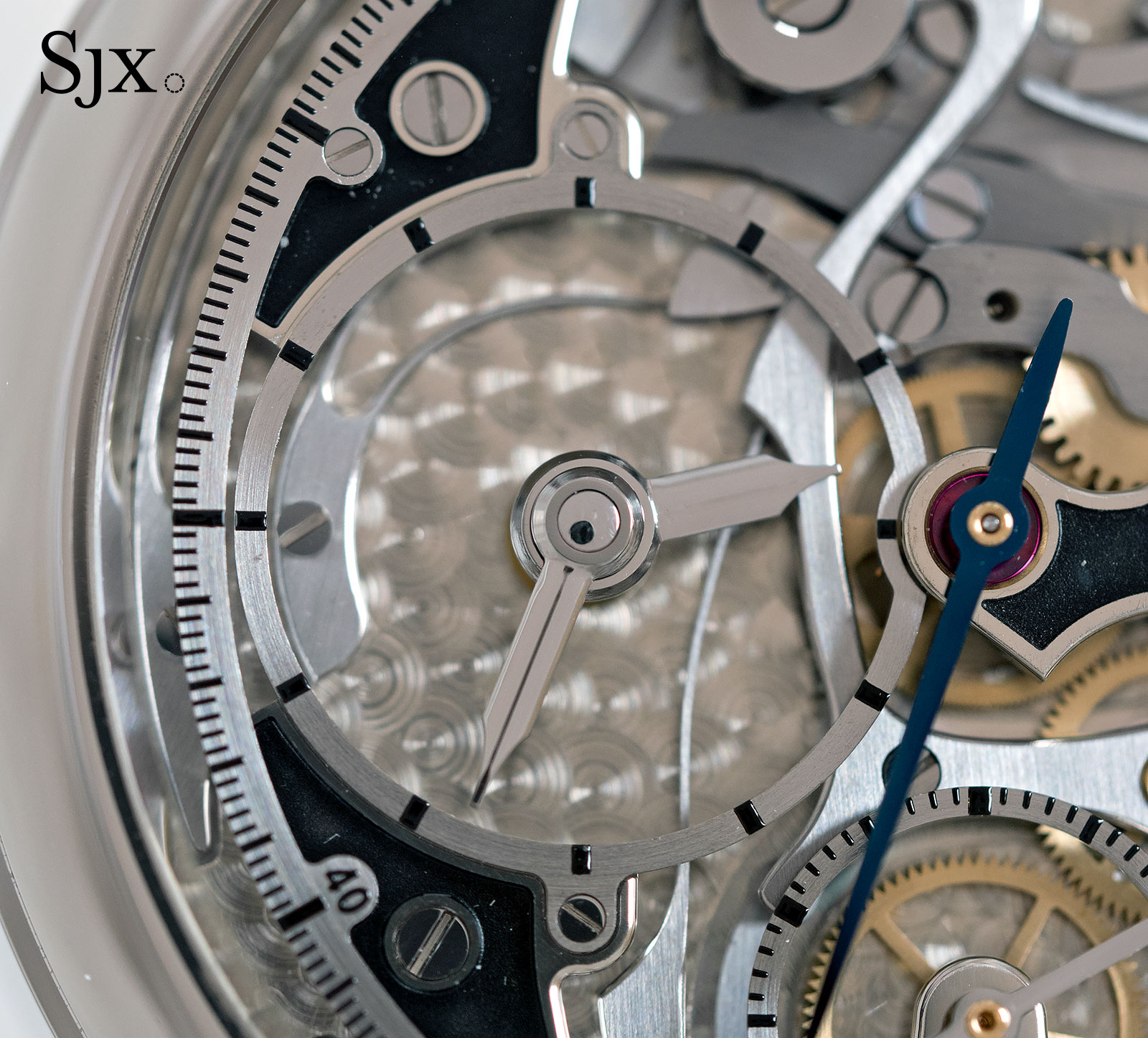 The sub-dial showing the time 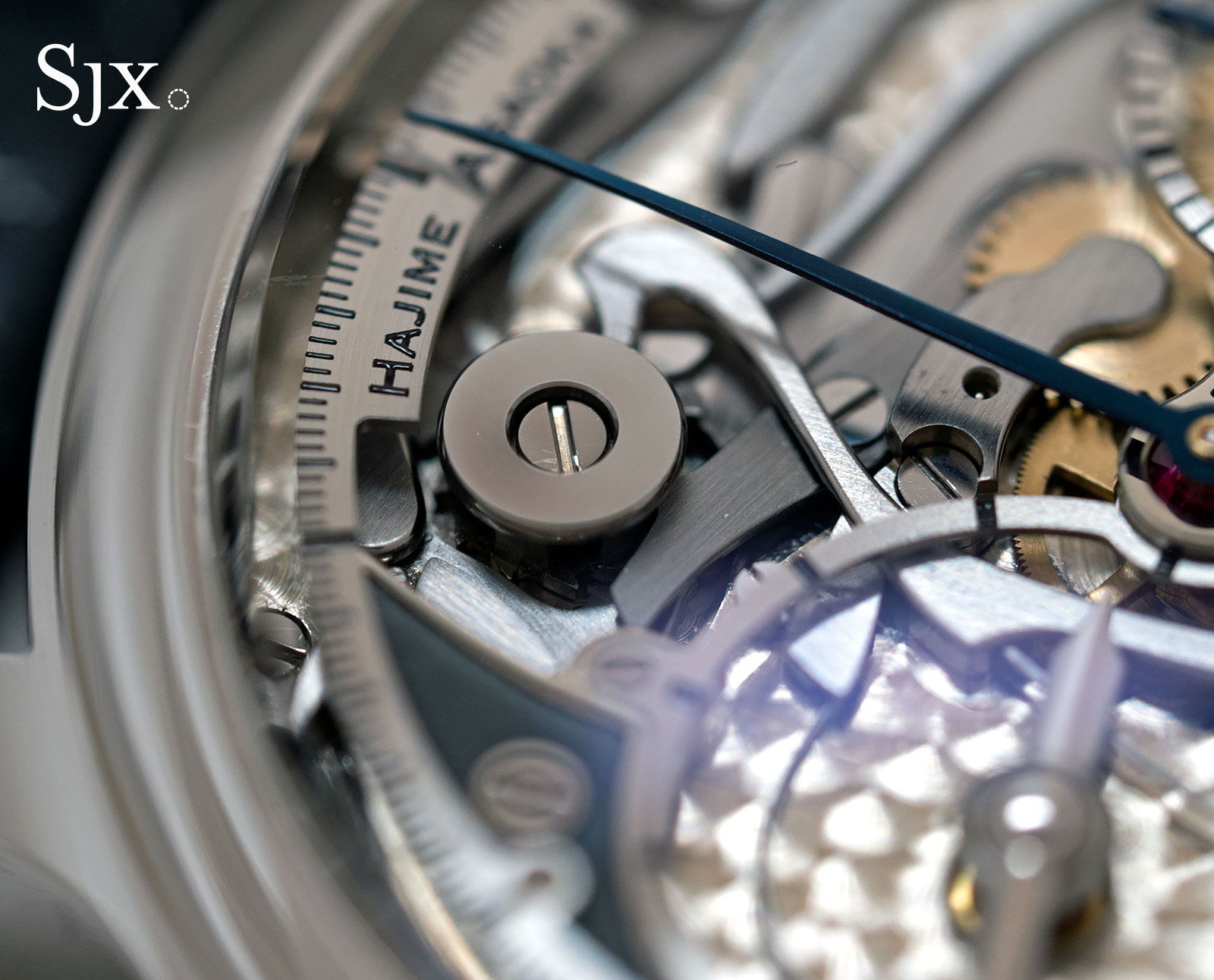 The long and slim levers and springs of the chronograph are especially fetching. 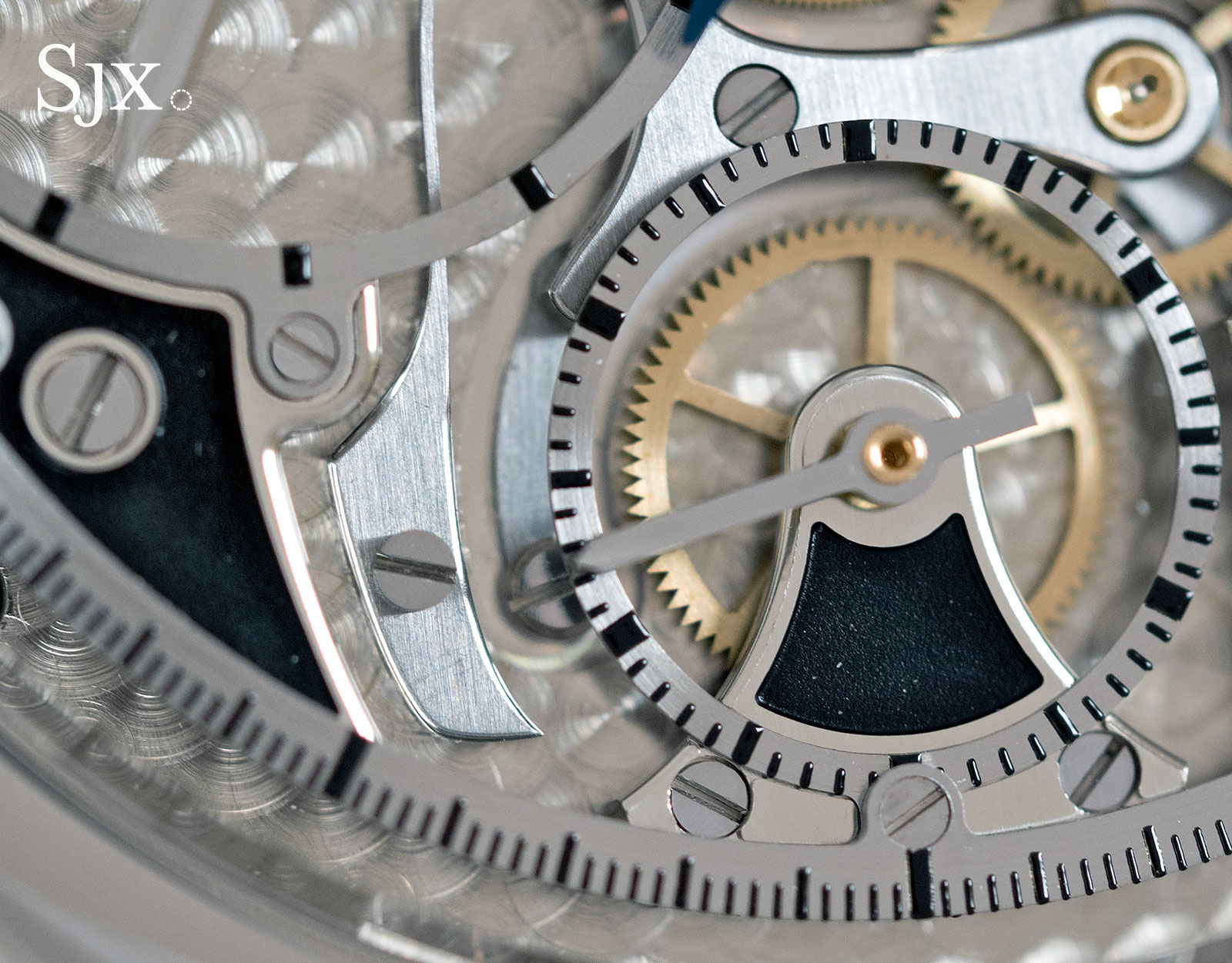 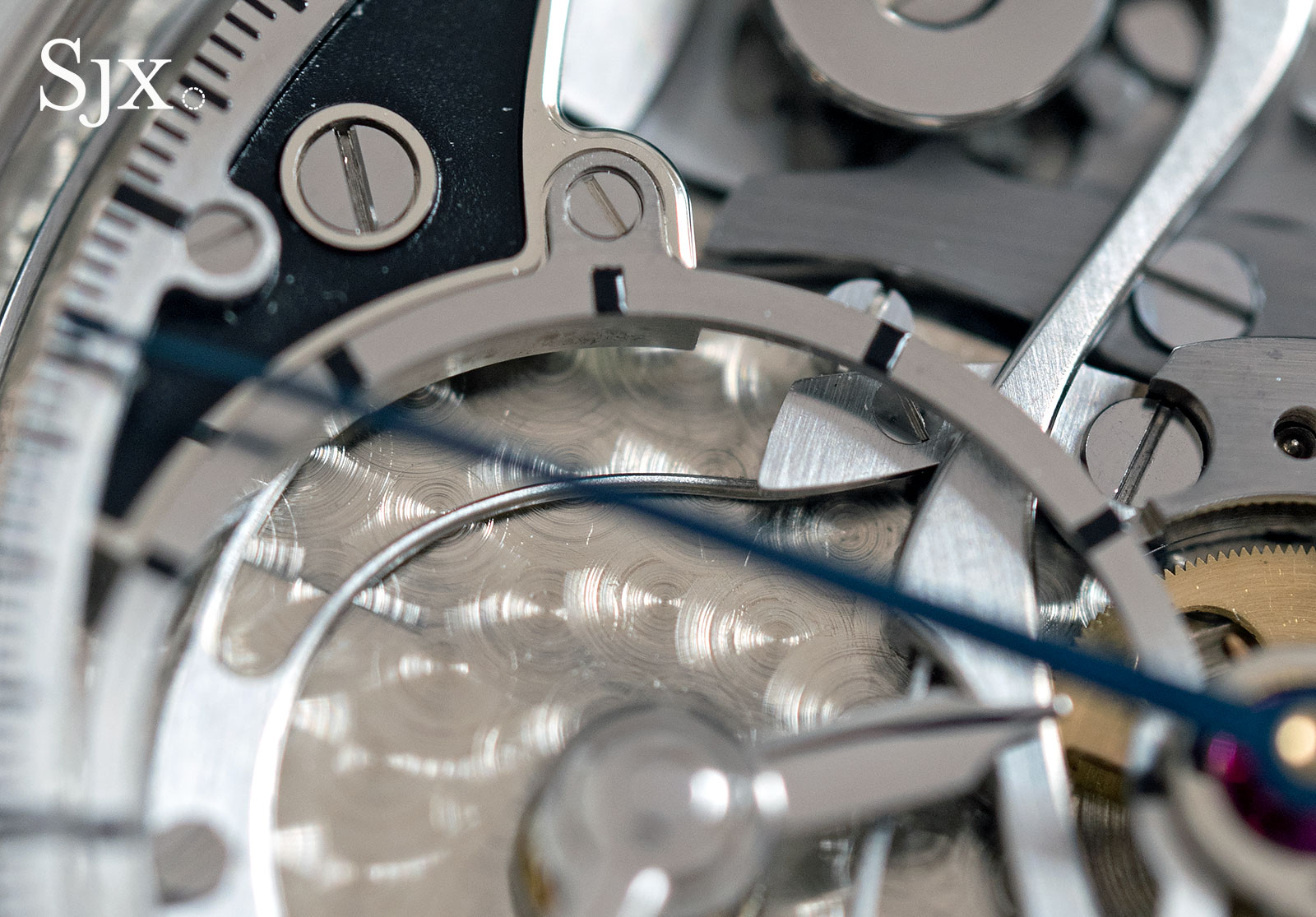 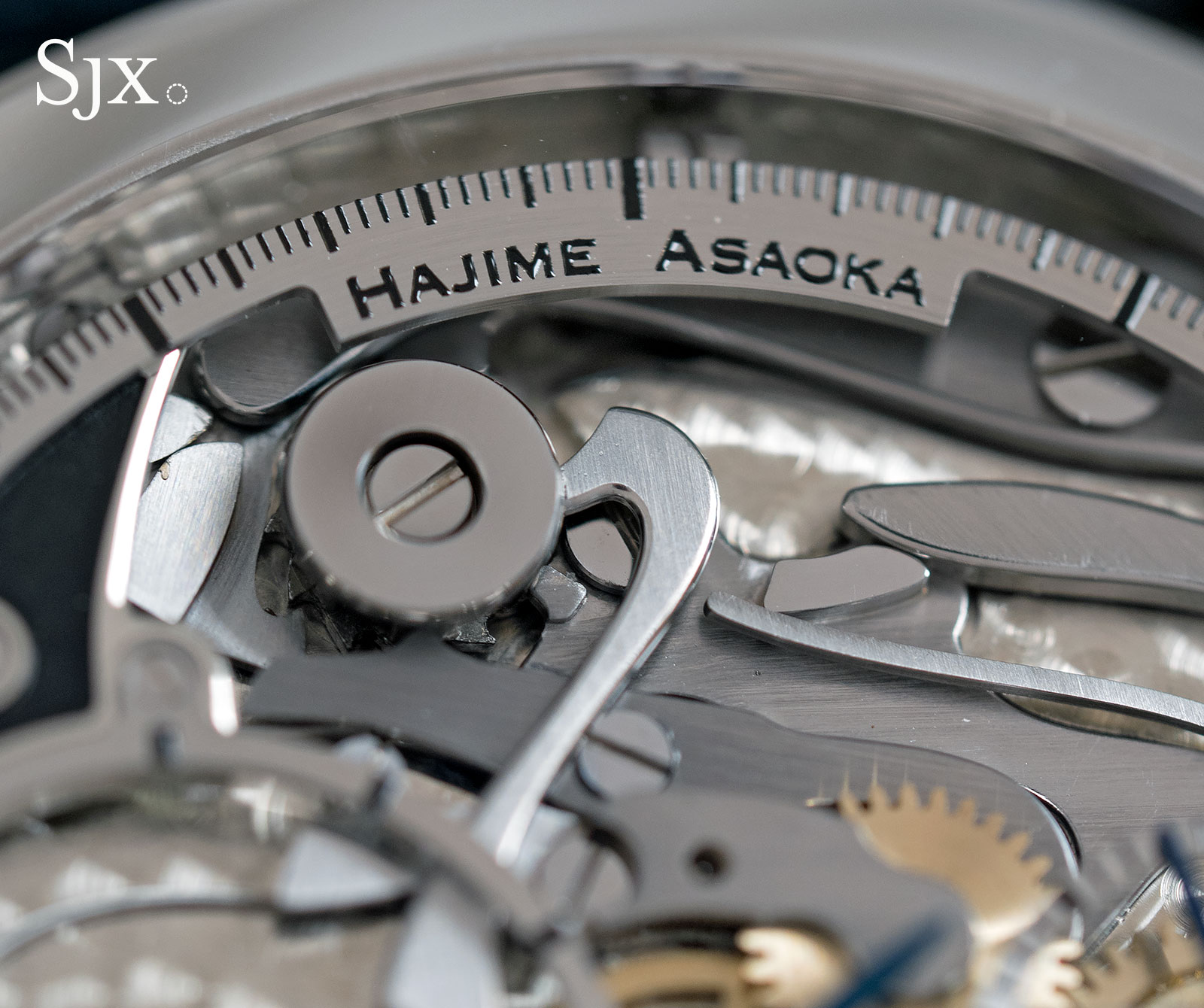 Note the thickness of the printed lettering and hash marks

Keeping up the amplitude

Asaoka is a fan of mid-20th century Swiss chronograph movements from the likes of Longines, an inclination that shows in the construction of the chronograph mechanism.

The movement was developed from the ground up as a chronograph, with the rear left sparse to accommodate the balance, and the gear train arranged to display the time on a sub-dial at nine o’clock.

Sharing some elements with calibre inside the Tsunami, the chronograph has the same enormous, 15mm wide, free-sprung balance wheel made of stainless steel. Because the balance wheel is so large and heavy, it has significant inertia when in motion, despite running at a slow 18,000 beats per hour. Combined with the high torque from the mainspring, that means activating the chronograph has barely any effect on the precision of the watch. 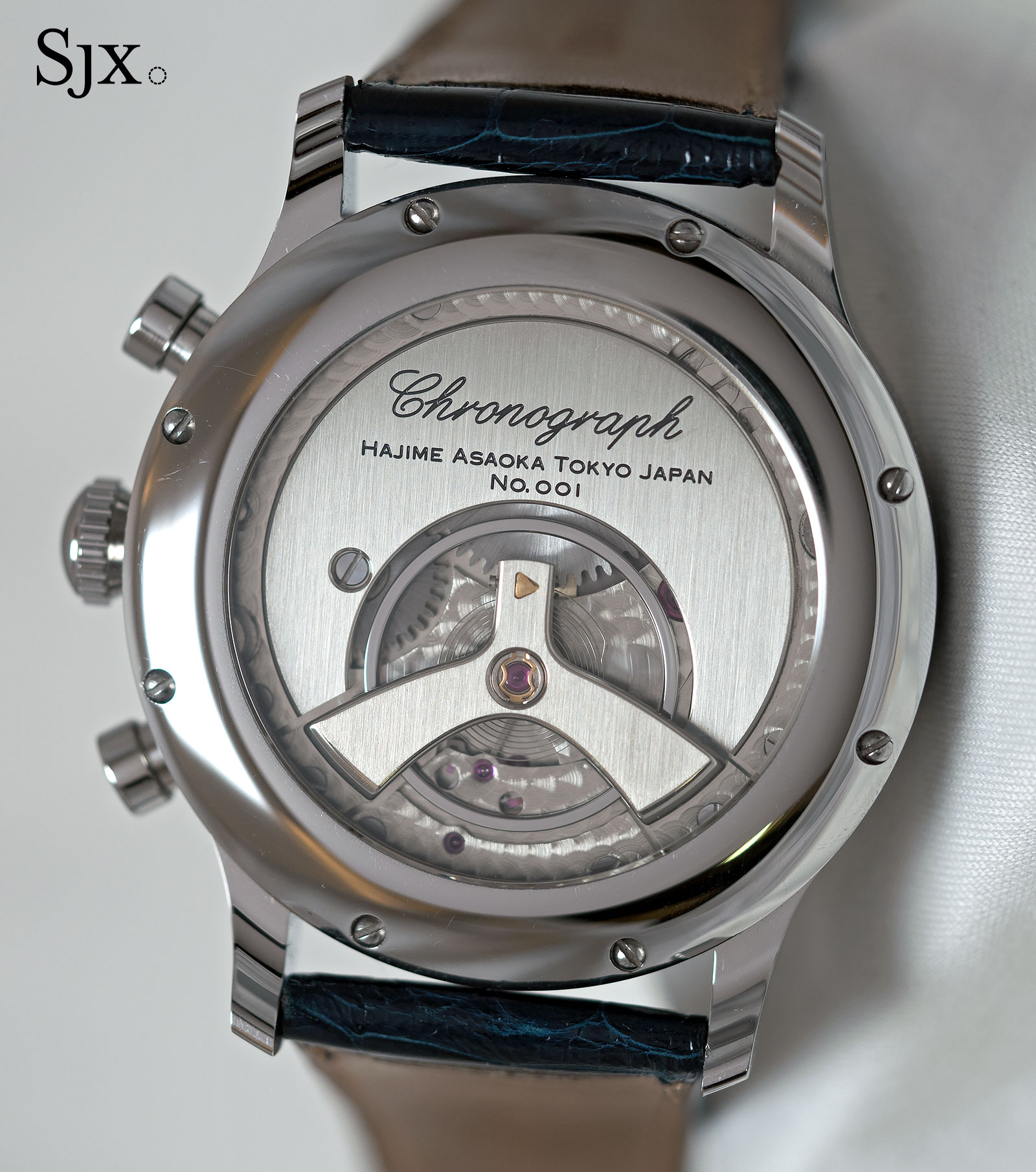 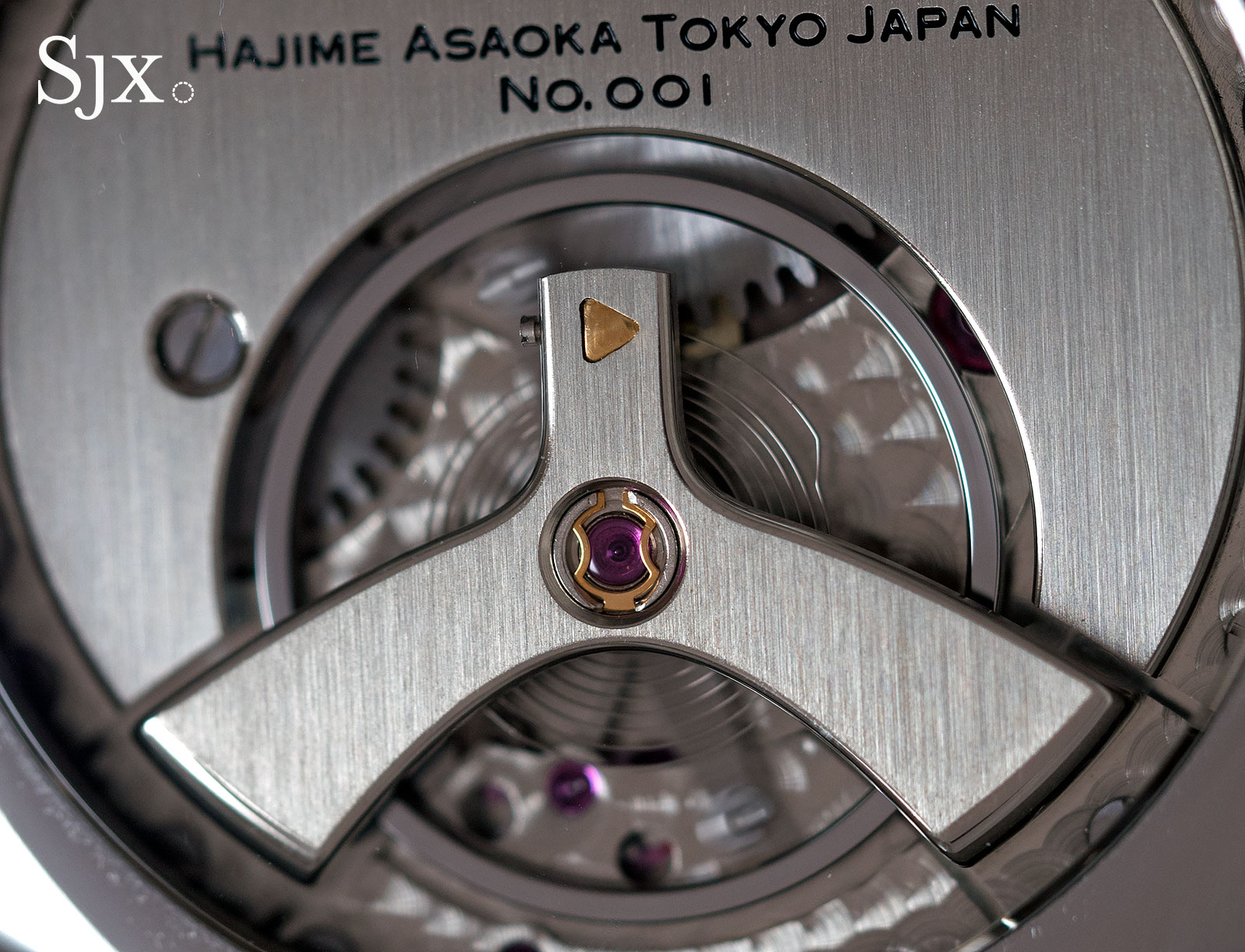 Activating the chronograph is a joy, with the pushers feeling exceptionally crisp, despite this particular specimen being a prototype. Notably, both pushers do not have springs inside, as chronographs typically do. This means the tactile sensation when using the pushers is unfiltered feedback from the mechanism.

Almost the entire watch is produced by Asaoka himself, including the hands, buckle and even the printing on the dial. Despite being a prototype, the detailing is impressive. The finishing is carefully applied, though accompanied by the traces that it has been done manually.

The attention to detail is evident in elements ranging from the form of the hands to the perlage on the main plate. 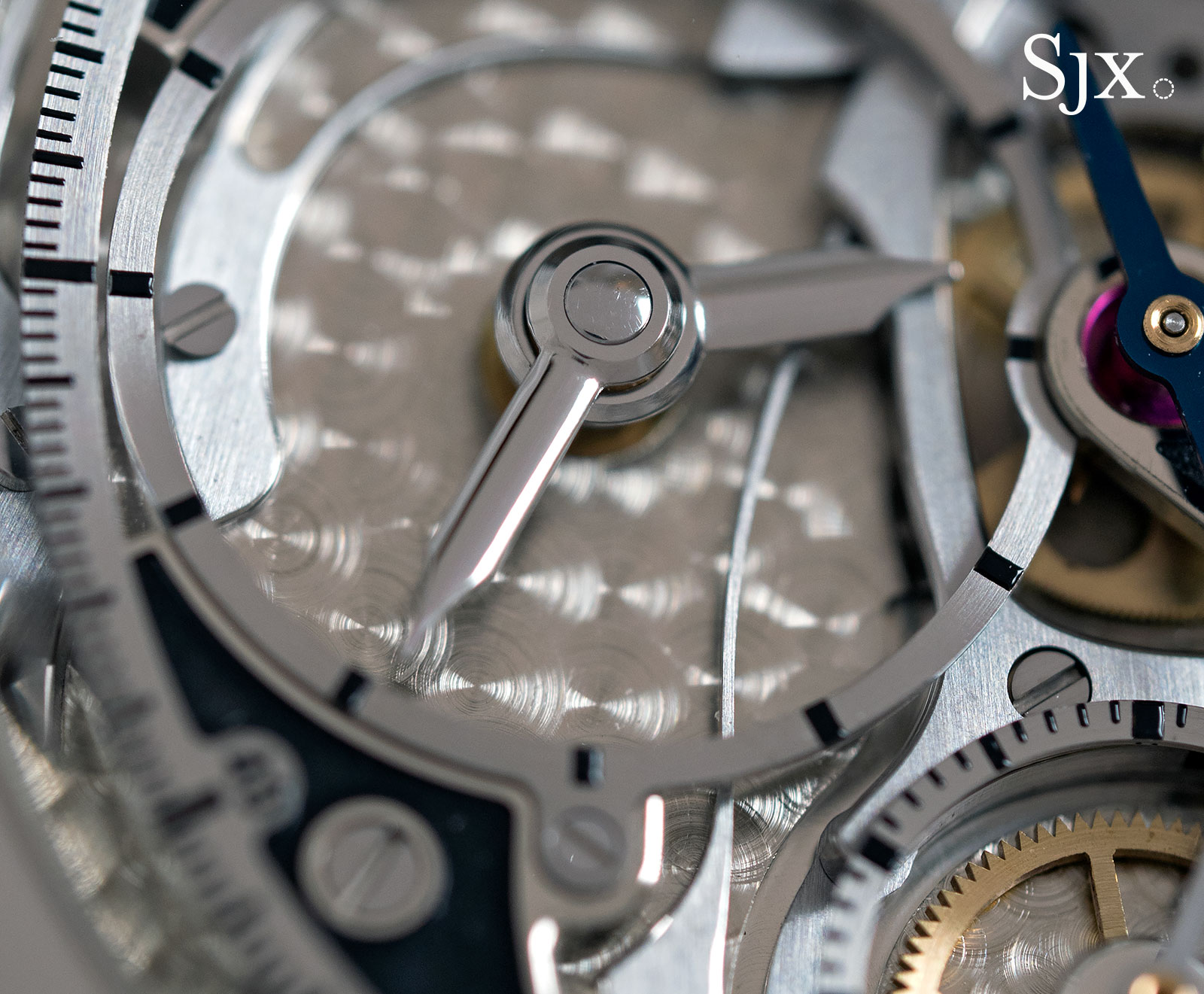 And also on the chronograph mechanism, with straight grained surfaces and bevelled edges of the levers, as well as circular graining on the wheels. 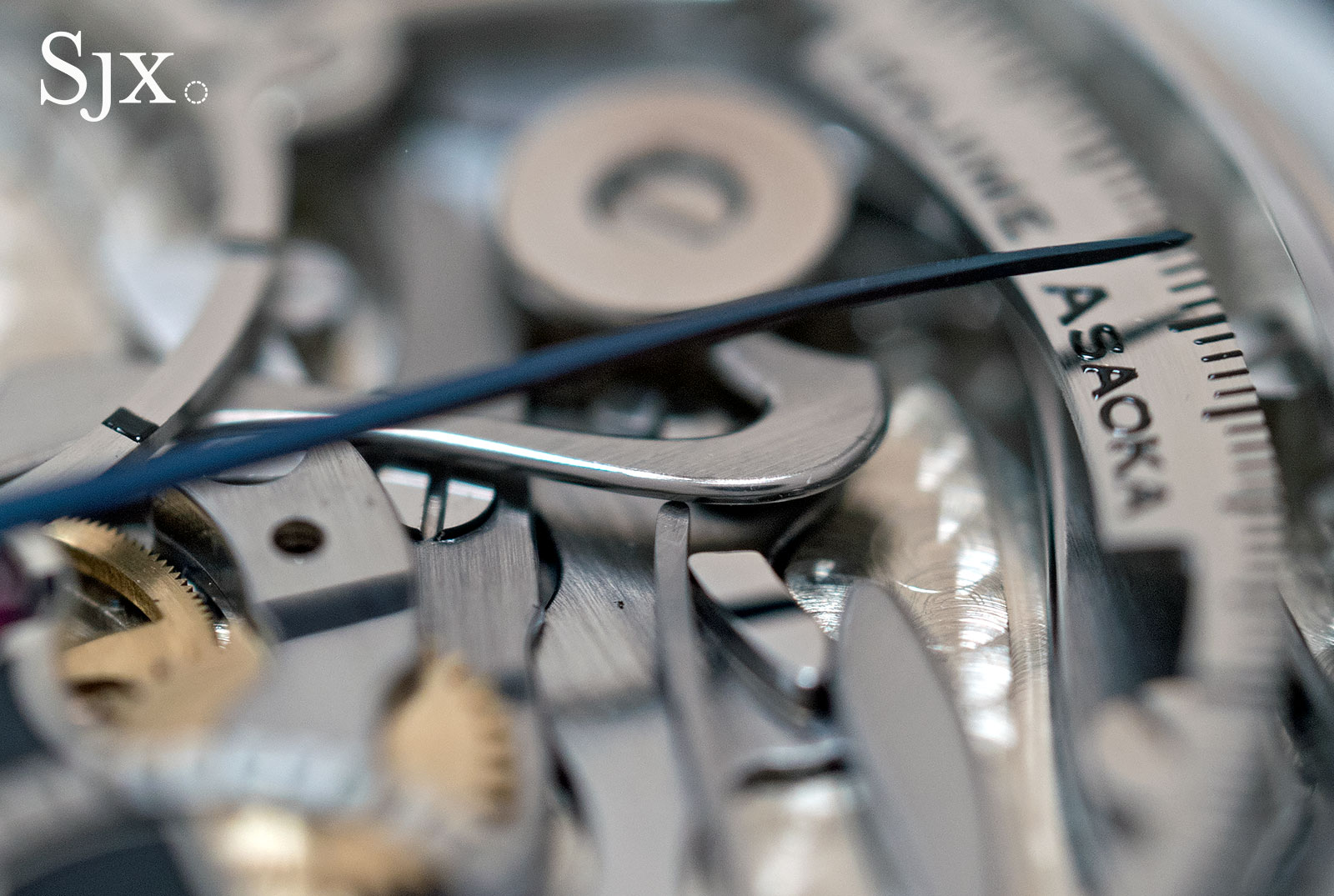 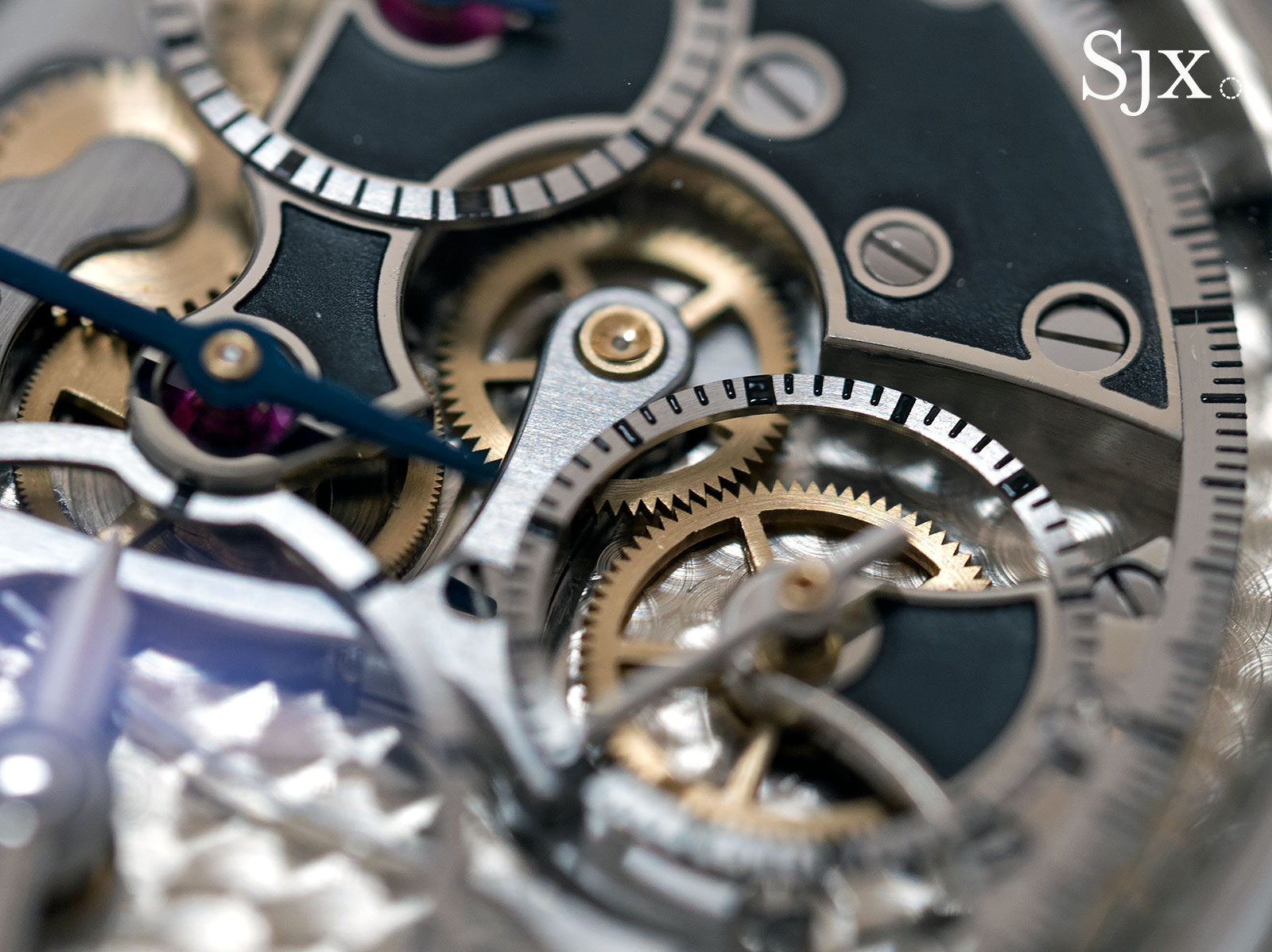 Because every other element looks so well built, it’s worth pointing out that the blued steel hands for the chronograph are somewhat flat. Perhaps a necessity due to the physics of the chronograph – to move the hands when starting the chronograph and keeping the hands intact when reseting them – but they are probably the only detail that feels thin. 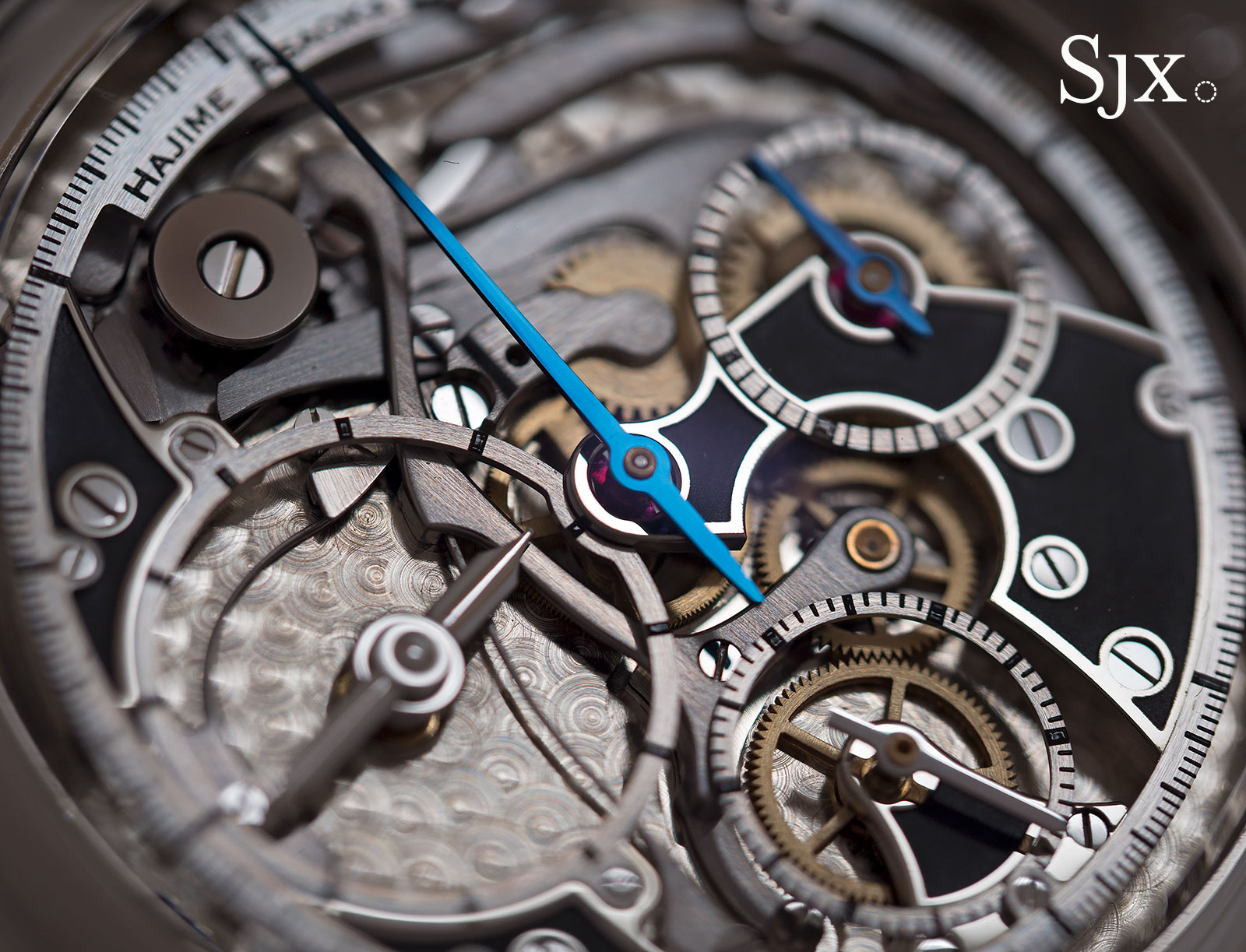 Since the watch was designed to show off the mechanism rather than have a dial, the look is mechanical and unusual. The intricacy of the chronograph leaves the legibility of the watch somewhat confused. And the polished steel hands on the sub-dial for the time tend to blend into the base plate of the movement. 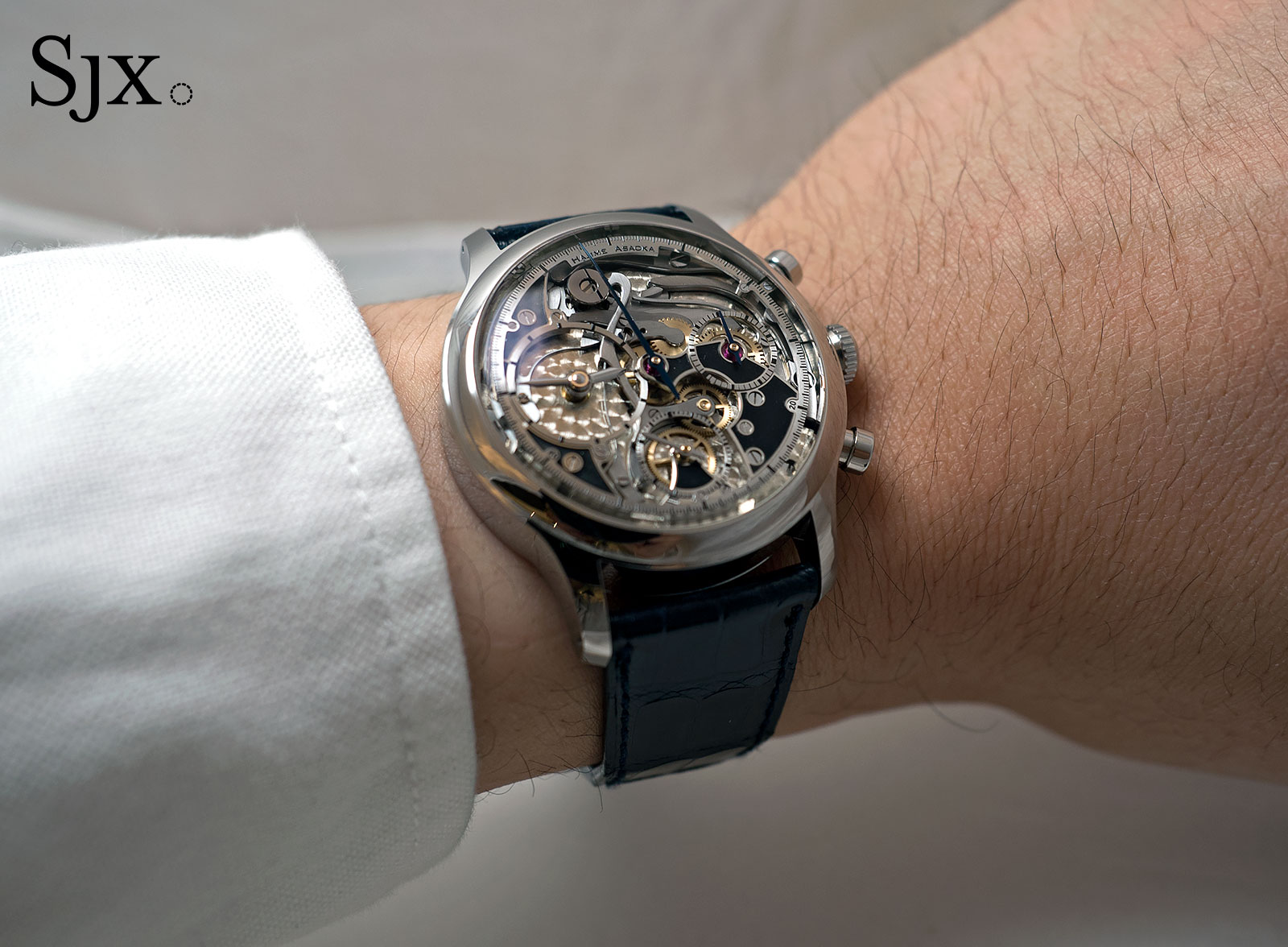 The black lacquer filling of the bridges is also striking, but also idiosyncratic. 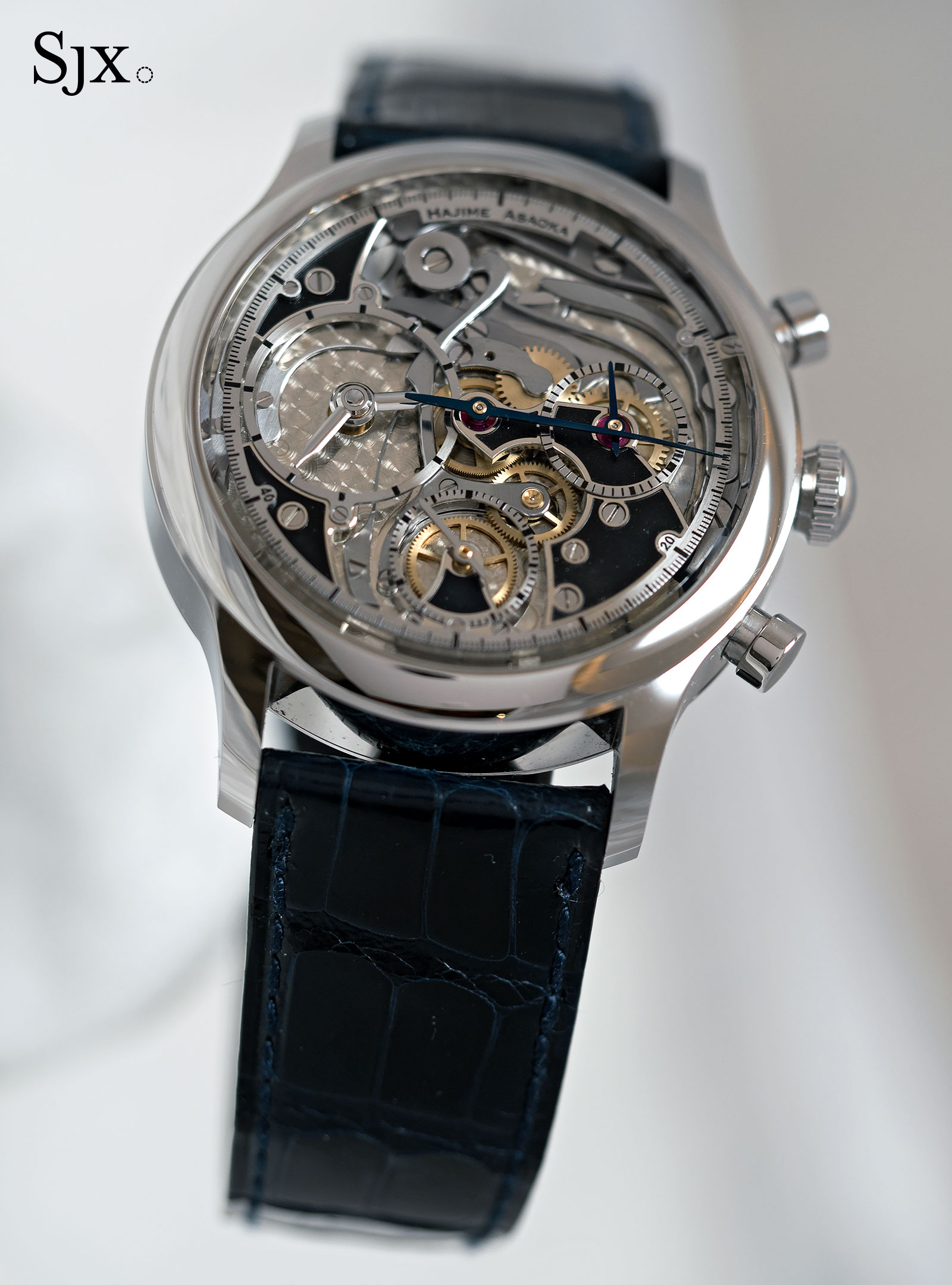 The Hajime Asaoka Chronograph is a limited edition of three watches, priced at JPY12m or about US$108,000.