The arrival of  the new Aquaracer 500m Full Black at Topper Jewelers is the opportunity for the second “Topper’s Corner” on Calibre 11. I love the all-black look of the Full Black and it reminds me of the Sinn U1 Black that I loved and owned for a while. TAG Heuer have really revived the black-on-black look over the last couple of years, with black case versions of the Monaco, Grand Carrera, Formula One and now Aquaracer joining the range. 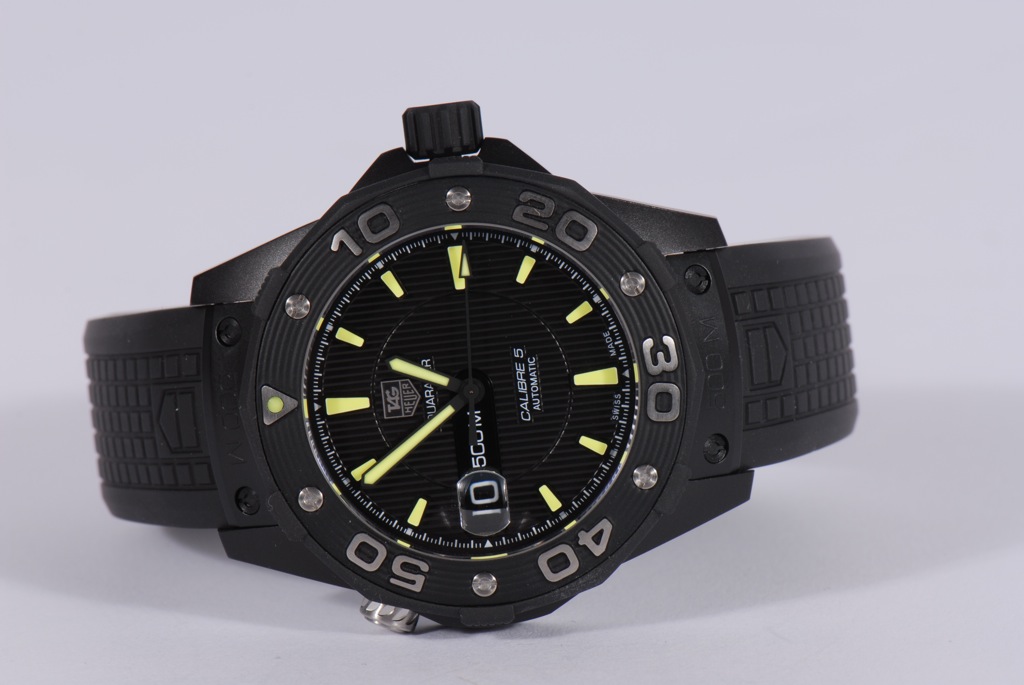 I had a quick look at one of these in the TAG Heuer store in Melbourne last week, but didn’t get a chance to compare it to the stainless steel model to check the differences. So, over to Rob from Topper Jewelers for that comparison and his review of the new Aquaracer.

The 500M is the most avant-garde model in the Aquaracer series, and the new Full Black 500m (Ref. WAJ2180) introduces many new design elements that build on last year’s popular WAJ2110 all steel watch to be the most modern looking of the range. Now that we have the Full Black Aquaracer in the store, we wanted to show you some detailed photos of TAG Heuer’s latest offering in the Aquaracer family, including some comparison shots with its all-steel brother.

Last year’s 500m Aquaracer brought in several modern features, such as a “cyclops” over the date window at  9’oclock, a vertical dial treatment and an innovative hard rubber bezel with applied numerals.  These were paired with  functional dive attributes, such as an automatic helium escape valve, easily adjustable heavy rubber strap and a larger, easy-grip crown.   The result was a unique juxtaposition of style and function that looked dramatically different from all the Aquaracers and the 2000 Classic and 2000 Exclusive watches that had predated it.   The new Full Black retains the same basic design DNA of the Aquaracer 500m Steel and then adds its own design flourishes to give it a more modern, stealth look. 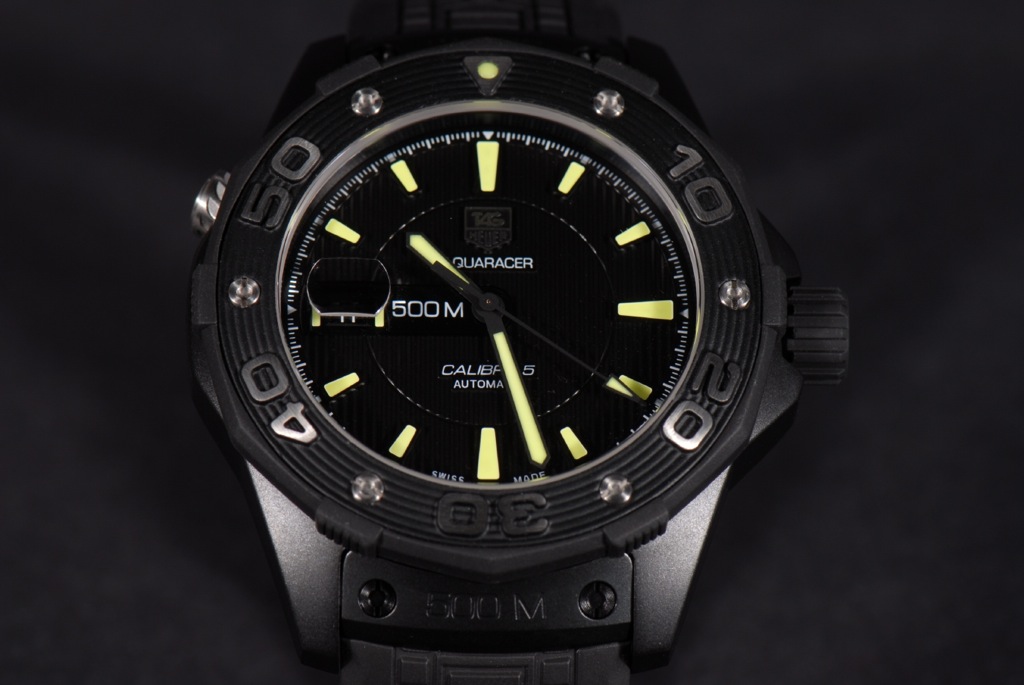 As is suggested by the name, the dial, bezel, case, crown, strap screws, rubber strap, and movement are all a subtle matted black.  Indeed only the bezel highlights, titanium deployment buckle, and helium escape valve aren’t black, and the watch’s main source of contrast from its all-black look is  the bright yellow and green superluminova on the hands, 12 o’clock bezel pip, and markers.

As to the composition of the case, we can assure the Calibre11 community that the case is made from light-weight titanium and not merely titanium-coated steel. Our store scale weighs the Full black including the rubber strap and buckle at 98.2 grams.  The similarly configured WAJ2110 steel watch weighs 130.3 grams.

The result of this titanium case and buckle is a large bold watch, yet with a weight very similar to the smaller  38mm Aquaracer.   TAG’s deployment buckle is also designed with the user’s comfort in mind.  Most deployment buckles on high end watches still utilize pre-set holes.  On this style of strap, the user must decide which hole he wants to slot the buckle.  The TAG deployment buckle utilizes pressure to close it, which means that as a wearer’s wrist size changes due to weather or other reasons, the wearer can make as finite an adjustment as desired  so they are never between holes. 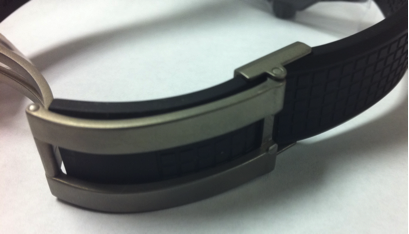 The pressure system of the TAG deployment clasp allows for the smallest of micro- adjustments.

Picture of the double button titanium clasp in locked position

TAG is a veteran at making Black PVD watches, and in their 2010 line they consistently pair PVD with titanium.  The Aquaracer 500m Full Black is now the third current production PVD titanium watch as it joins the Formula 1 Chronograph, and the Grand Carerra RS Chronographs in this regard. 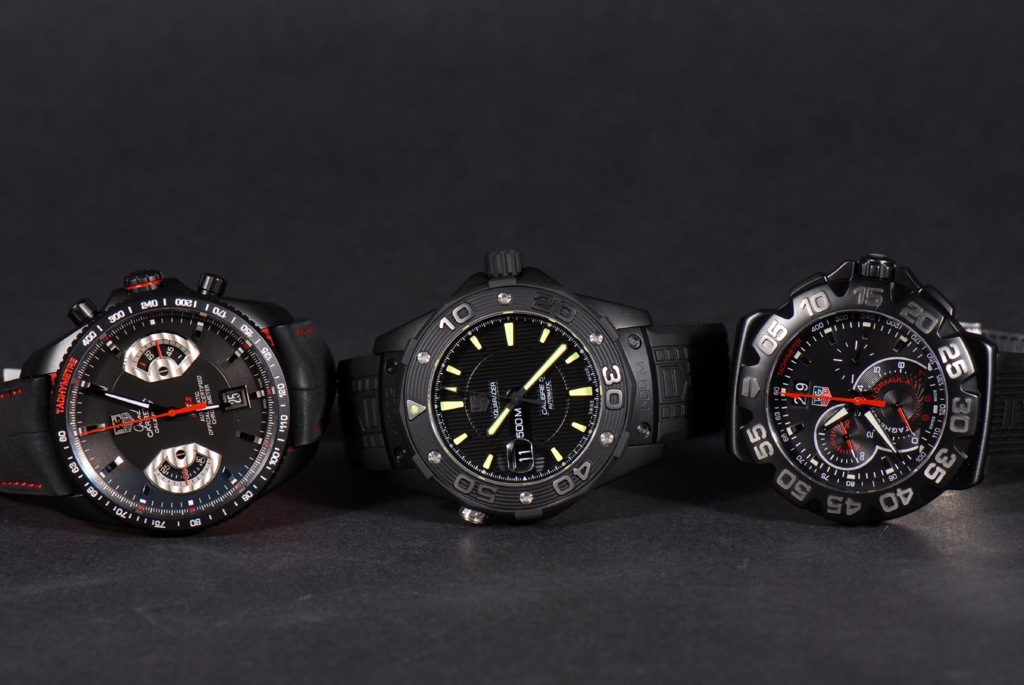 Customer satisfaction regarding coated watches is something a jeweller finds out about months or years after purchase.  While one can certainly appreciate the subtle texture of the finish at the moment of purchase, wearability is always a primary concern with black watches and something that is revealed over time.  Fortunately, the black electroplated watches from 1980s are in the distant rear view mirror.

Back then we would have clients come into the store with watches that had appeared to bleed and had revealed  white spots that provided an unattractive contrast to the coating.  This “bleeding” would begin shortly after purchase.   While it is certainly possible to scratch a modern generation PVD case, we have never had a customer come into the store with a current generation TAG PVD watch they’ve purchased and complained that the color had mysteriously eroded.  I asked Ali Portillo, who processes most of our repairs if she ever  had a customer complain about the PVD coating on one of this new generation watches.  At the risk of jinxing our client’s good fortune with this generation of product, she confirmed that bleeding has only come up on with the vintage electroplated pieces.

The TAG Heuer Aquaracer 500 M Full Black should be considered for someone who wants a watch that is daring and different.  At US$2,750 the watch is only a slight premium over its US$2,550 steel counterpart.  We think this watch will be one of the runaway hits of the holiday season and have ample quantities available.

Below are some close up photos of different aspects of the watch and comparison photos with WAJ2110.FT6015 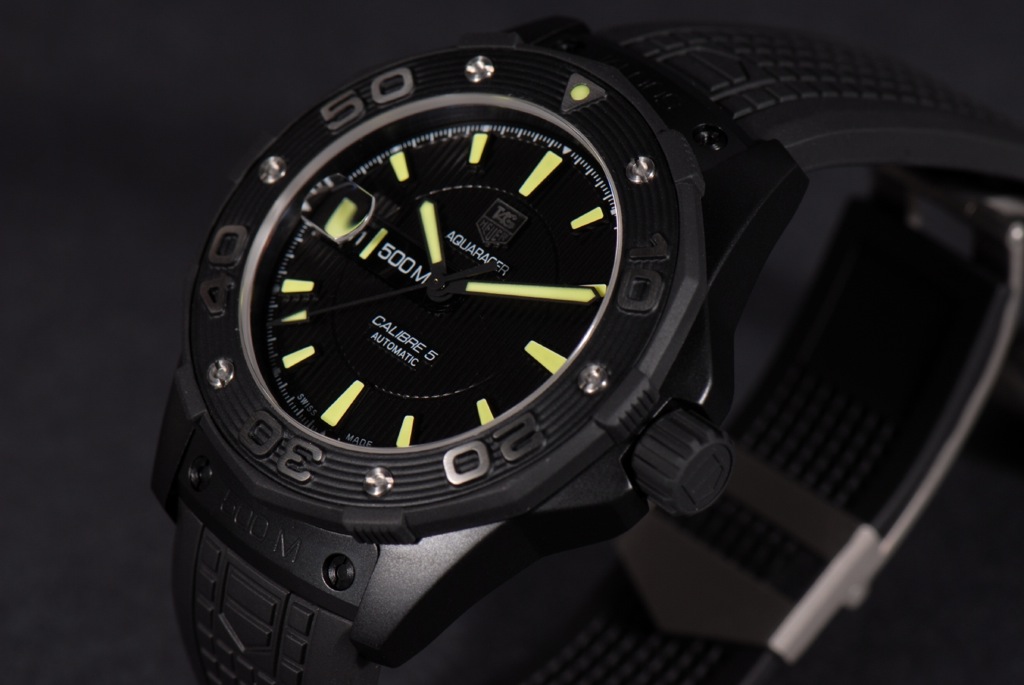 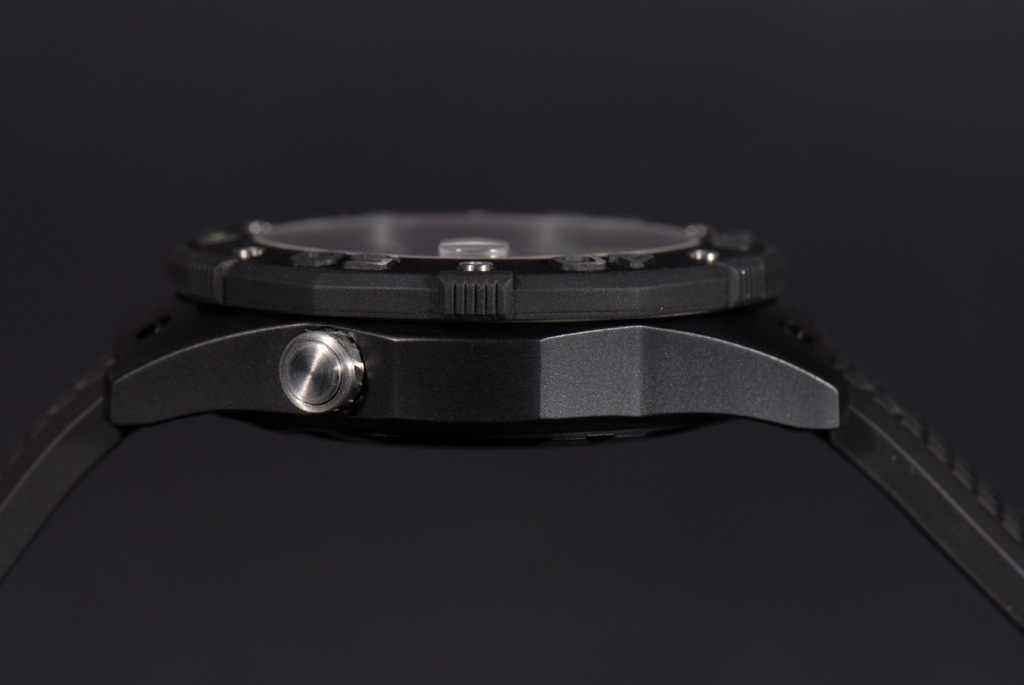 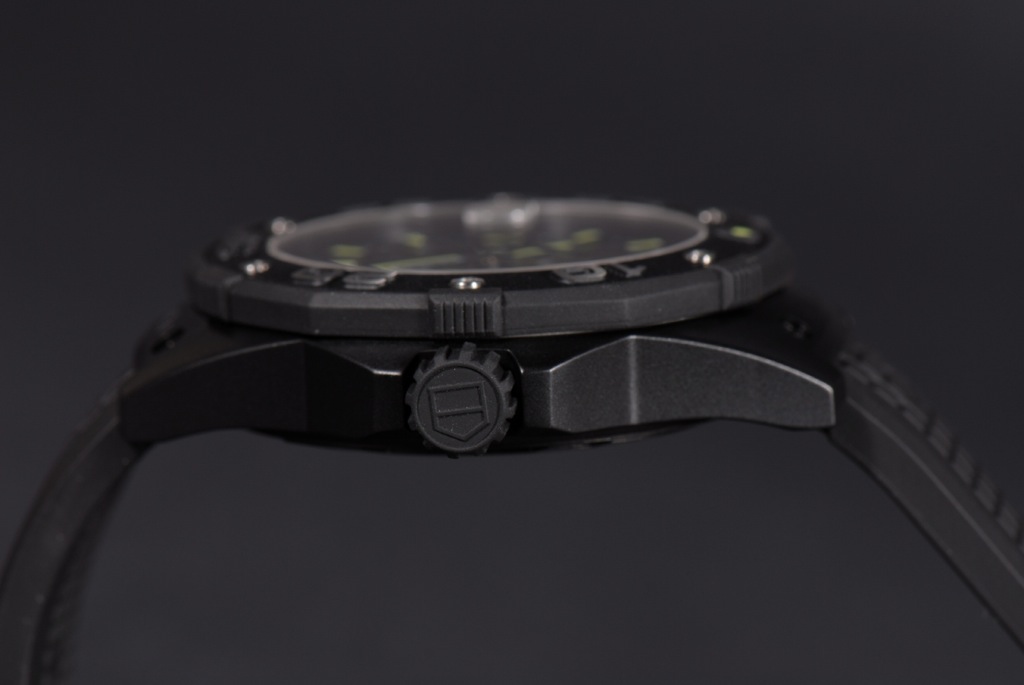 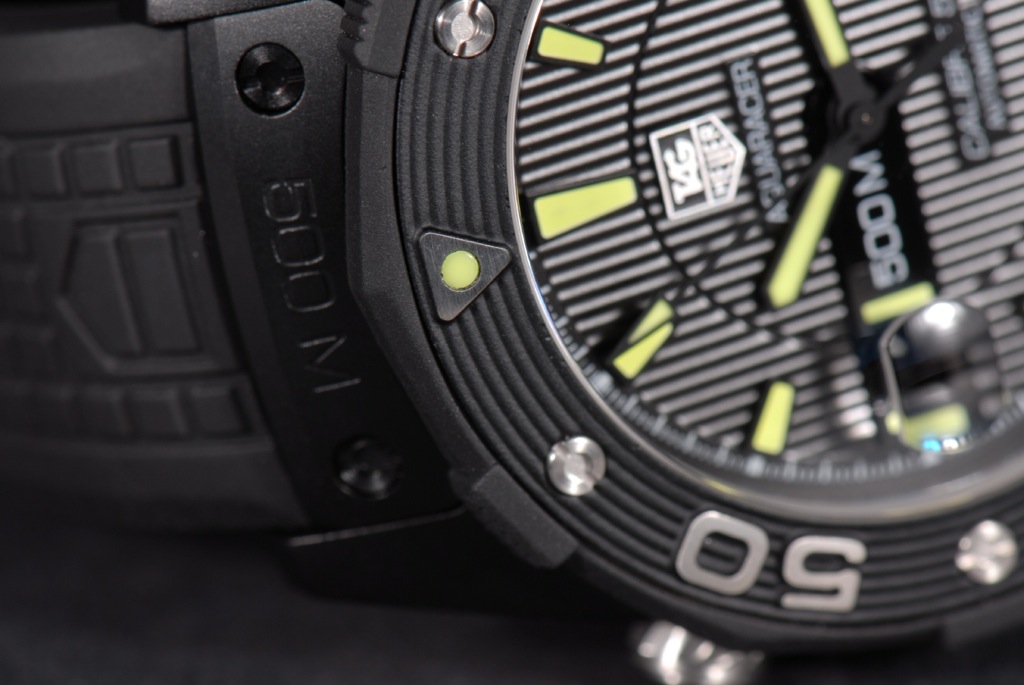 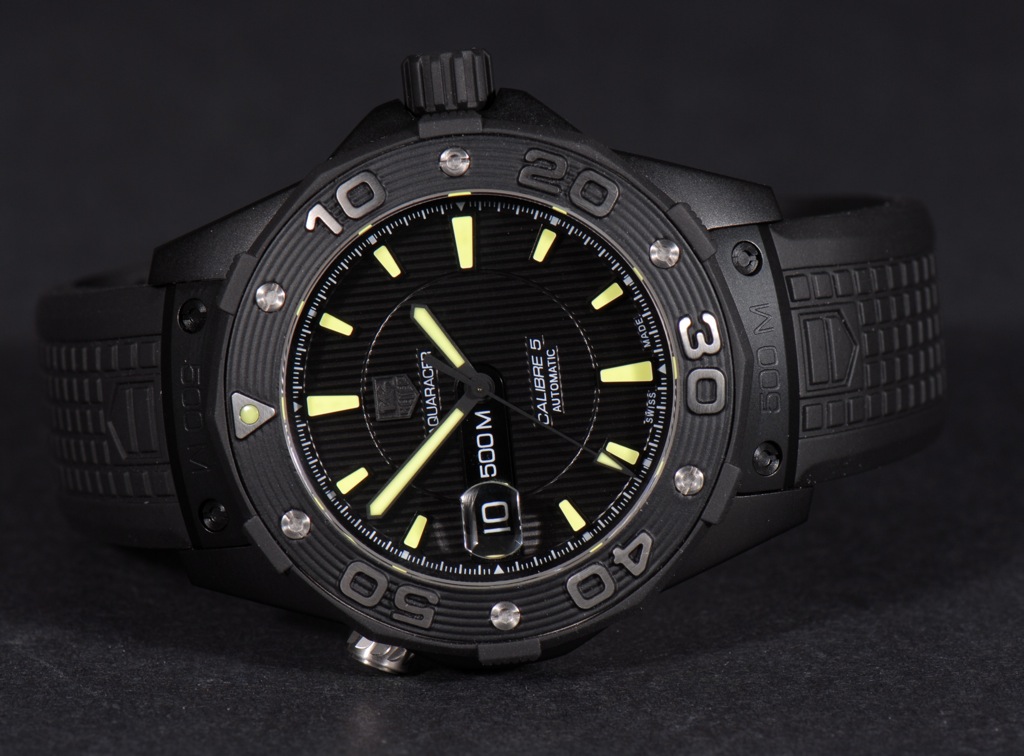 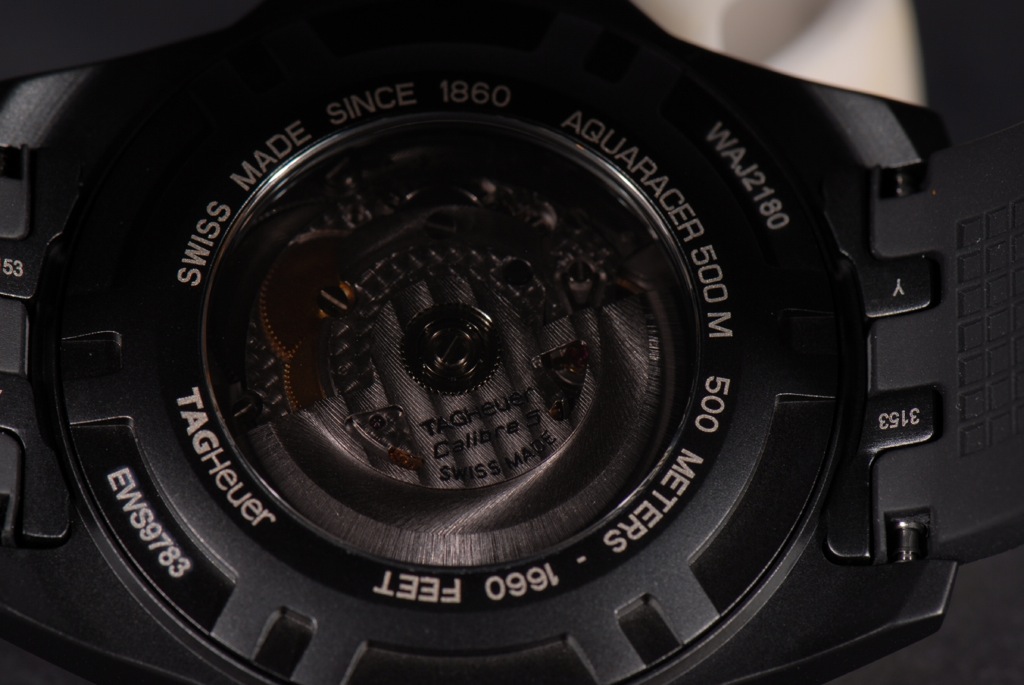 The TAG Heuer Caliber 5 movement through the with its “smoked” finish, consistent with the rest of the look 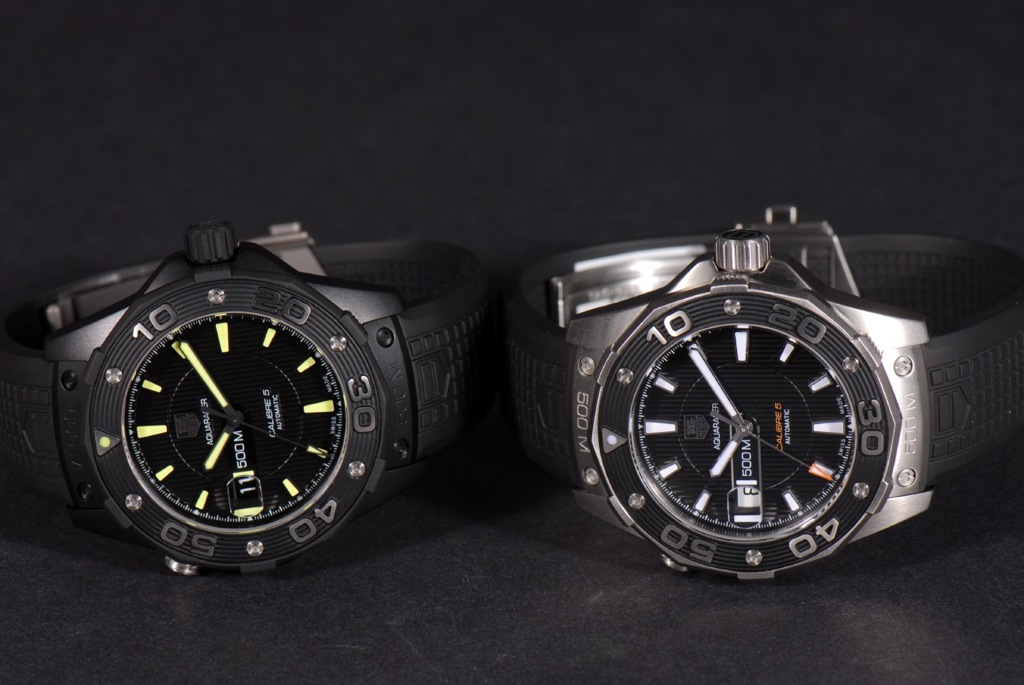 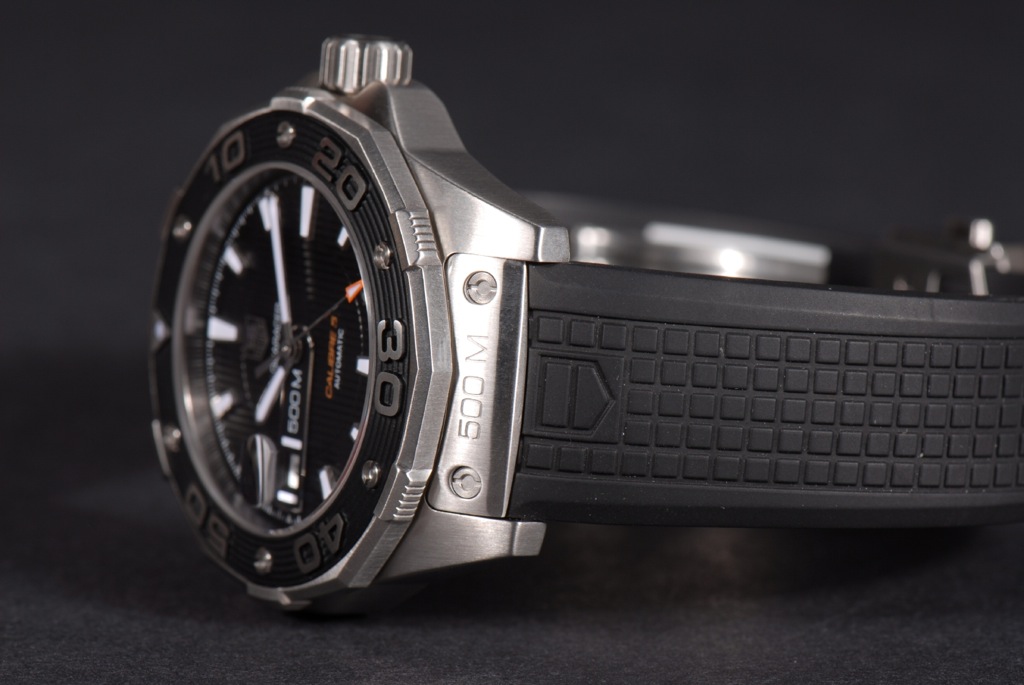 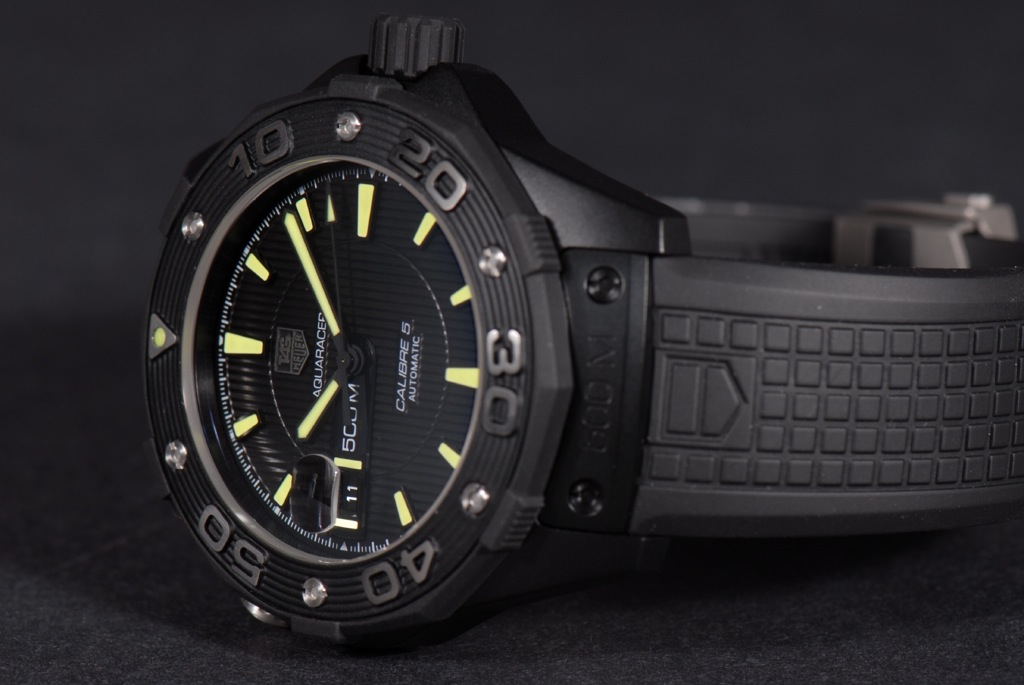 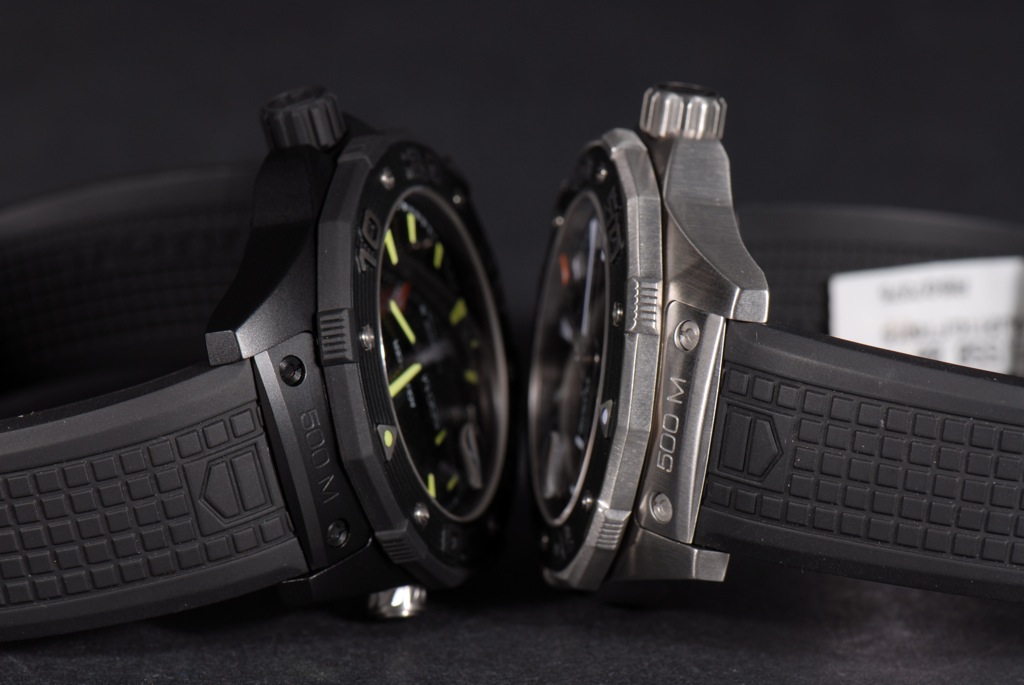