This year has been the year of the GMT for TAG Heuer, with Link, Carrera and Formula 1 GMT models launched. While each of these are regular production models, there is a fourth GMT watch new to the collection- the TAG Heuer Aquaracer 500m Calibre 7 GMT (Ref. WAK211A).

Based on the same 41mm stainless steel case as the Calibre 5 Aquaracer 500m, the new Calibre 7 is effectively a GMT version of Ref. WAK2110 with a Blue GMT hand and a revised ceramic bezel. 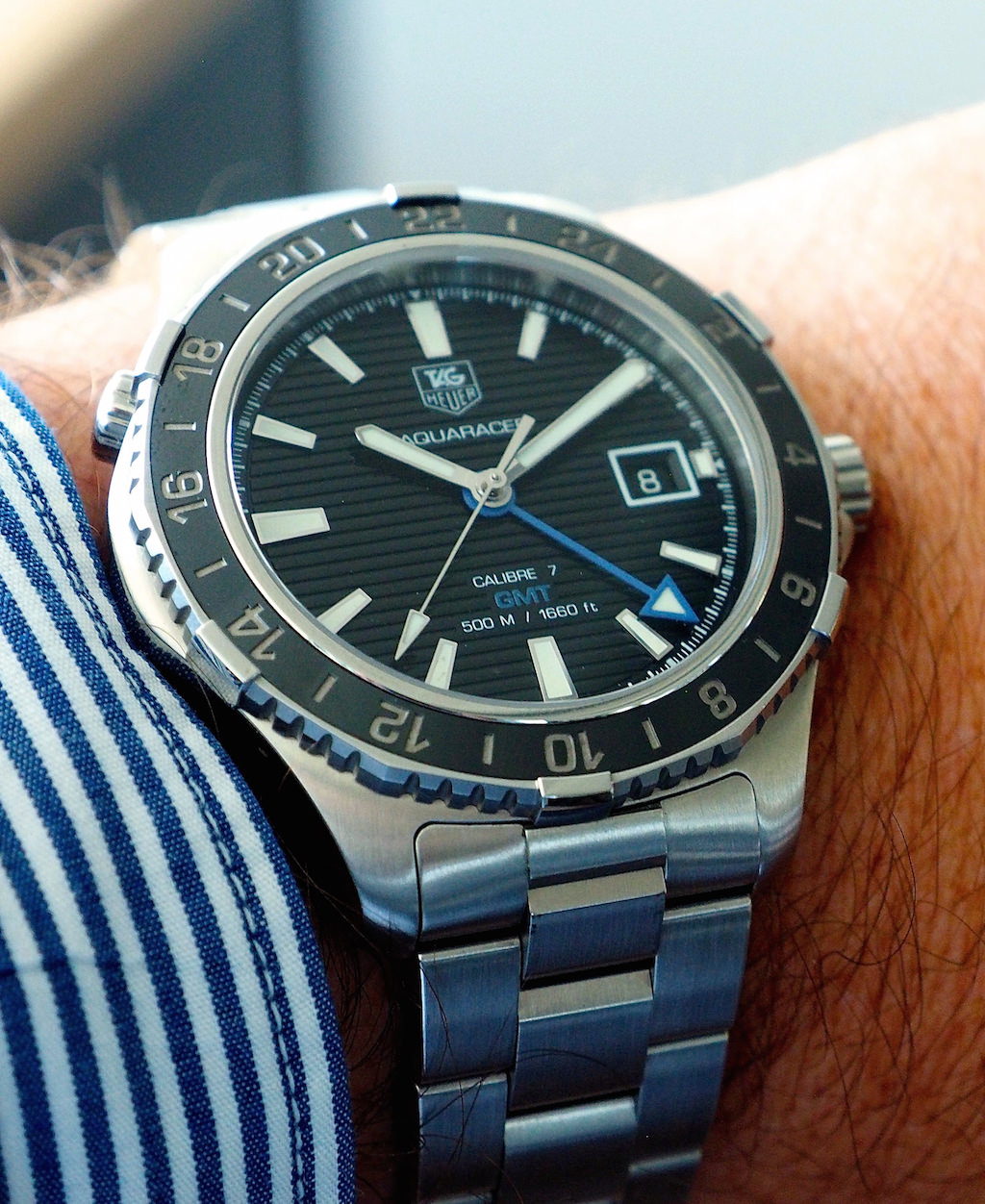 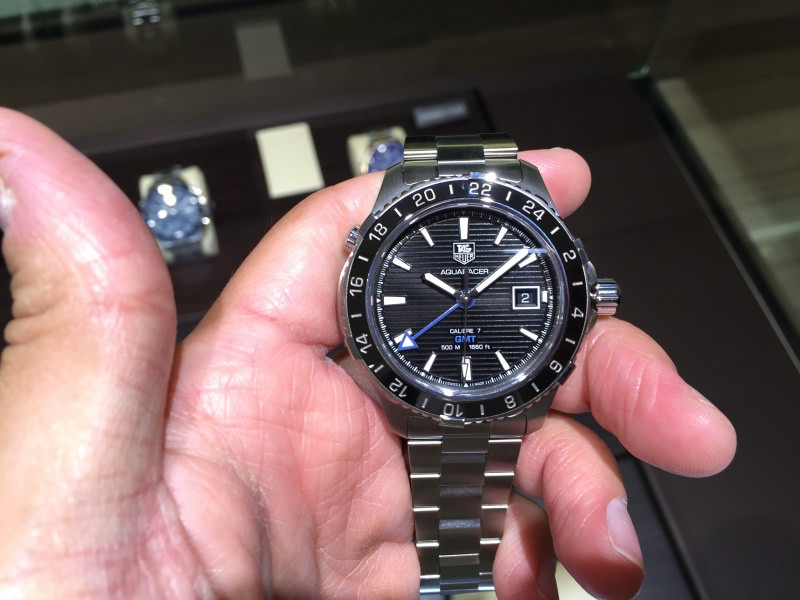 It’s been a couple of years since we last reviewed the Aquaracer 500m series, so the new GMT is a chance to get reacquainted with TAG Heuer’s deep diver. The 2012 re-design was a little confusing, as it brought the 500m series visually closer to other Aquaracers, dropping the bespoke case of the very popular 2010 series. Putting that aside for a moment, the watch itself is classic and attractive, if a little generic. The Rolex Submariner template has long ago been adopted by the industry as the “default” look for the dive watch category, and whether it be Omega, Breitling or TAG Heuer, the formula of a clear open dial with a black rotating bezel is a constant. While the older Aquaracer 500m series was a more progressive design, the new one feels more grown-up and less likely to date.

The Aquaracer 500m has a distinctive dial, with a good-looking horizontal streak pattern and clear bright white lume on the applied hour-markers and hands. 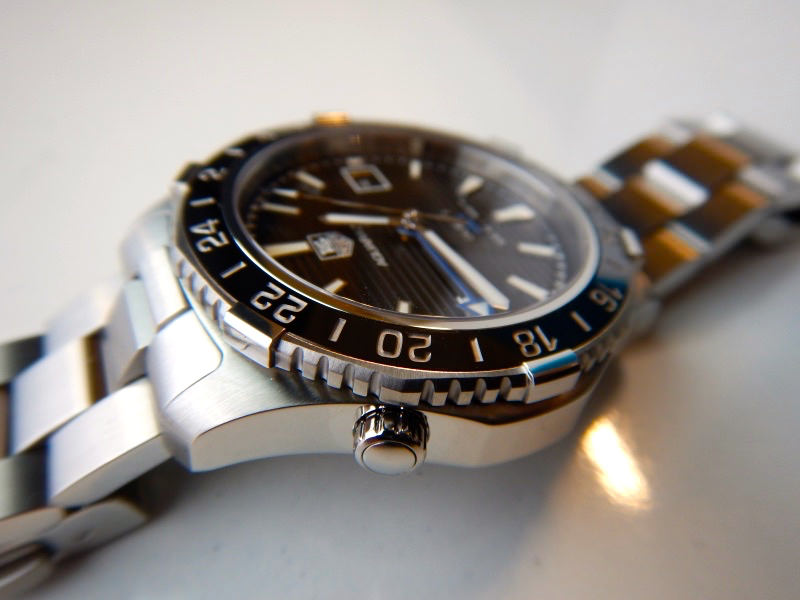 One aspect of the case that you won’t see on other Aquaracers is the helium valve at the 10 o’clock position. So what is this and how does it work? Contrary to popular belief, it’s not there to help recreational divers, even those who descend further than the nearest coral reef. In fact the helium valve is there mainly for commercial divers, who may have to spend some time in underwater diving bells where they breathe a gas called heliox, which adds helium to the oxygen. Because these helium particles are so small, they can find their way inside the watch, past the o-ring. The problem is that if the diver then ascends too fast, a pressure difference is created which can destroy the watch, for example popping off the crystal.

The helium valve relieves this pressure by popping open when there is a 2.5 bar pressure difference- it works automatically, and the valve doesn’t need to be pressed or screwed. And while the helium valve certainly works, the reality is that very, very few buyers of this watch, or any dive watch for that matter, will ever need it. But then the same could be said for the number of people needing a 1/ 10th second chronograph or a car with a top speed in excess of speed limits- it’s there because it demonstrates the purpose of the watch and is a nice engineering complication. 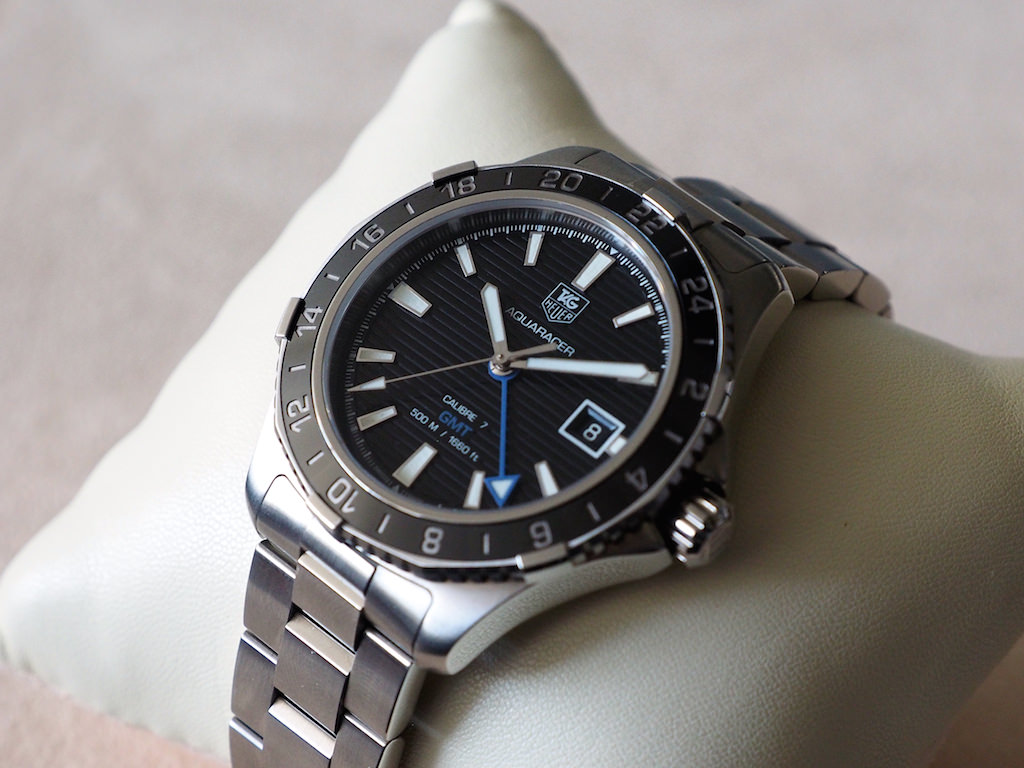 Like the Formula 1 GMT, the second time zone hand is a bright, attractive blue and is easy to read thanks to the oversized triangle point. 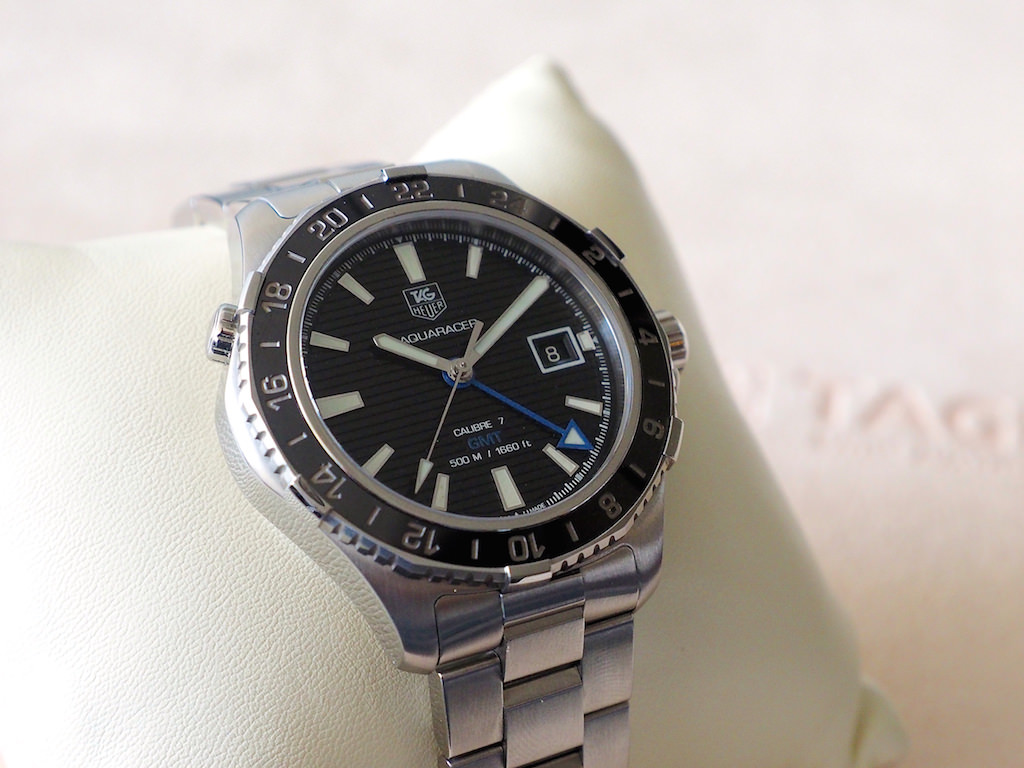 The bi-directional bezel is made from ceramic and numbered to 24 hours, similar to the first Autavia GMTs. While the watch looks great, it must have been tempting to use the Pepsi-style bezel of these earlier Autavias to make the watch stand out further. 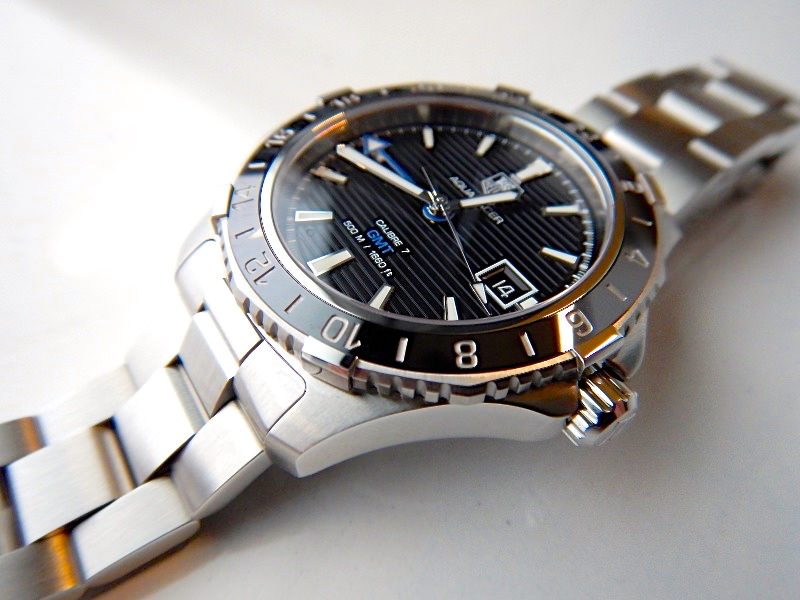 The Aquaracer 500m uses a 3-row brushed steel bracelet with a divers extension- the same bracelet that has been part of the Aquaracer range for some time. The clasp has double-safety buttons to stop accidental release and looks good- however with the large flat surface, expect to get a few knocks and scratches on the clasp…they’re unavoidable and can be polished out easily. 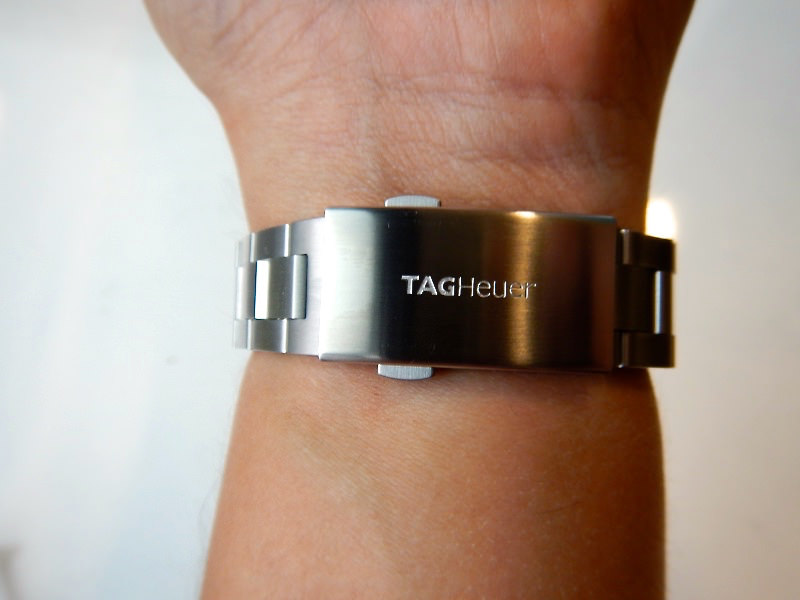 Given that the Aquaracer 500m is the flagship of the Aquaracer range, you might expect the watch to come with the H-Link bracelet offered on the 300m, which to my eyes is a more attractive and upscale design. 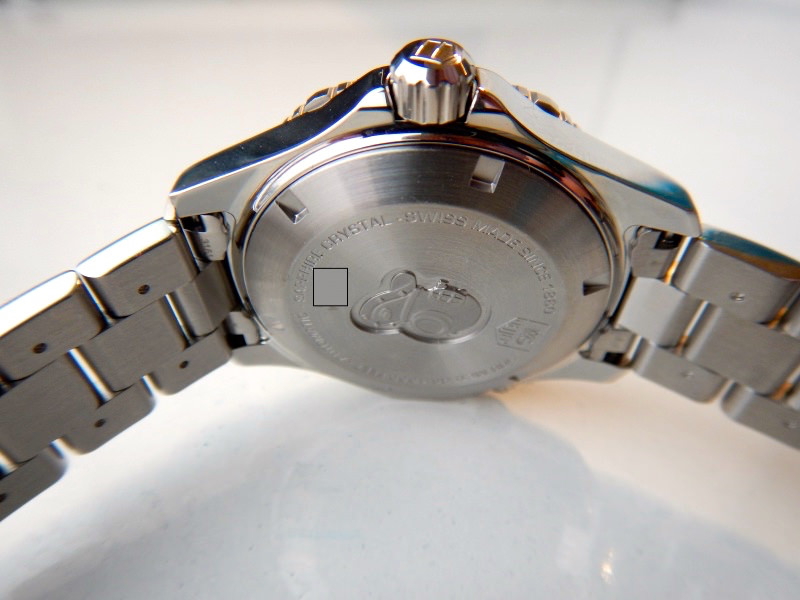 The Aquaracer 500m has a thicker caseback than the 300m, to allow for the additional depth rating. The now-traditional divers-helmet logo adorns the caseback. 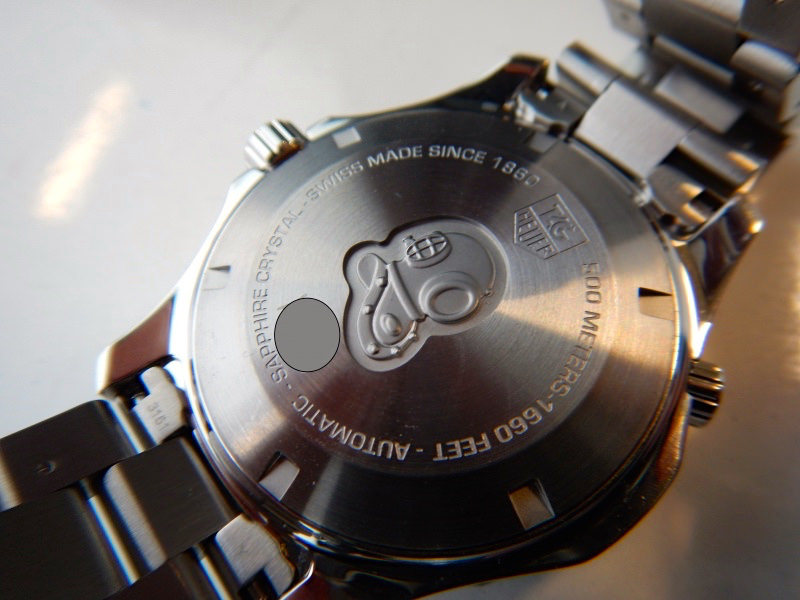 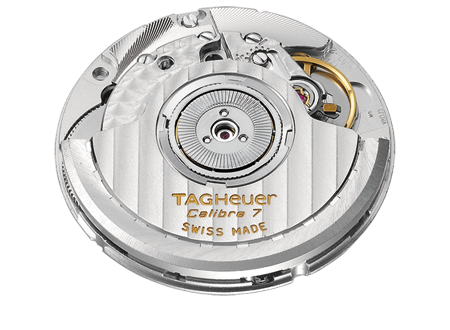 TAG Heuer offers two Calibre 7 movements- the ETA 2892 (shown above) and it’s GMT variant, the 2893-2. The 2893-2 movement has a GMT module developed by Dubois Depraz that is mounted to the base ETA movement. The 2892 is also the base calibre for the 2894-2 (TAG Heuer Calibre 17), so it’s very much a tried and tested movement and regarded as one of the better ETA calibres.

Expect power reserve of about 46 hours, which is a little more than the Calibre 5 movement offered across the rest of the Aquaracer 500m series. 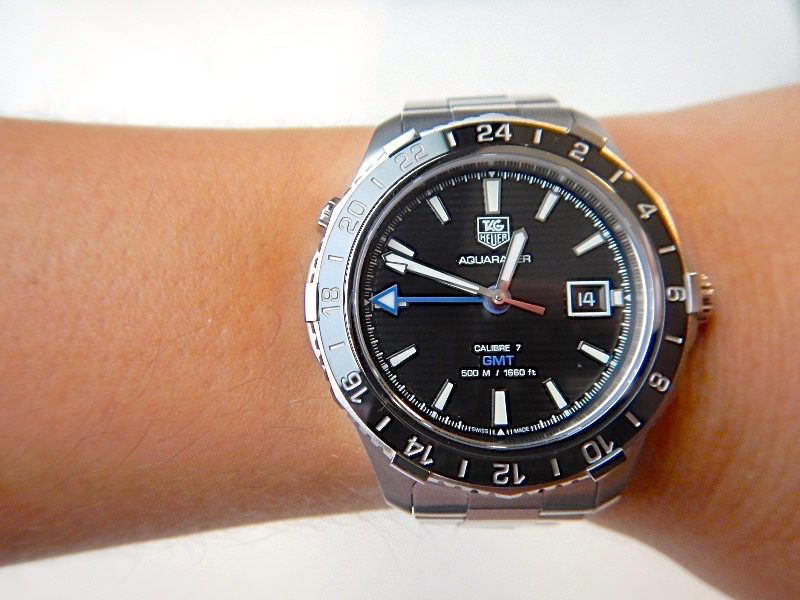 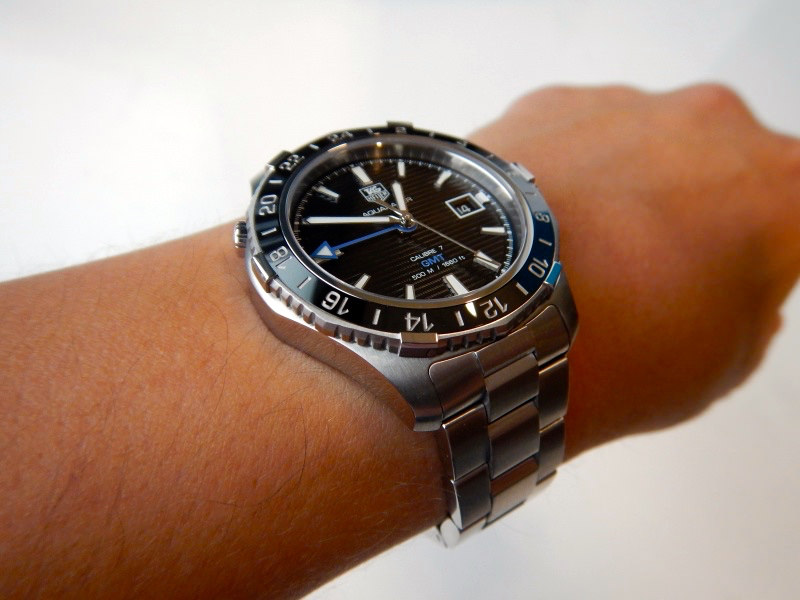 Despite its 500m rating, the new Aquaracer GMT maintains a relatively slim profile and sits comfortably on the wrist. The size will come down to personal taste, but to me 41mm is about as large as I would want to go for a watch like this. 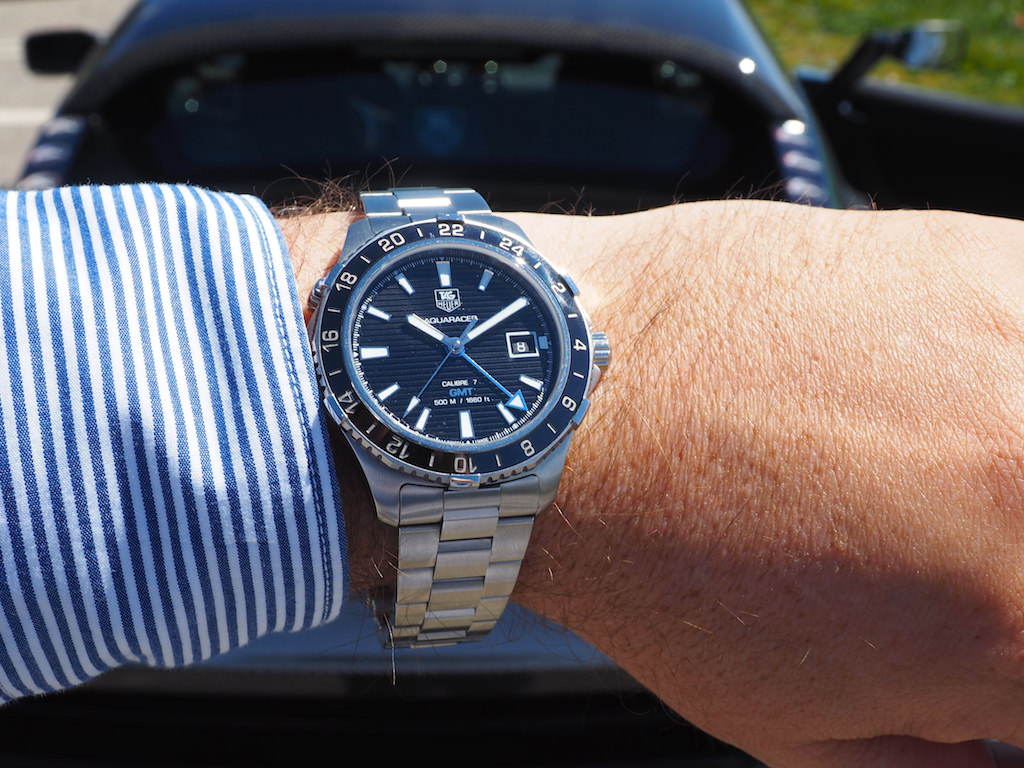 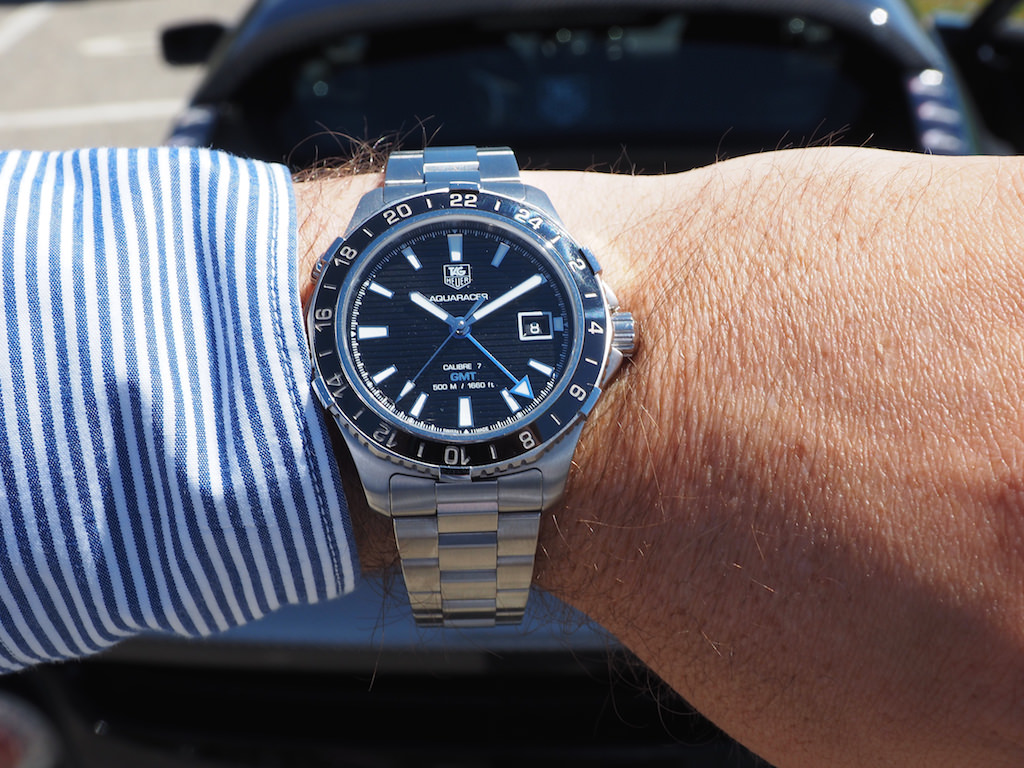 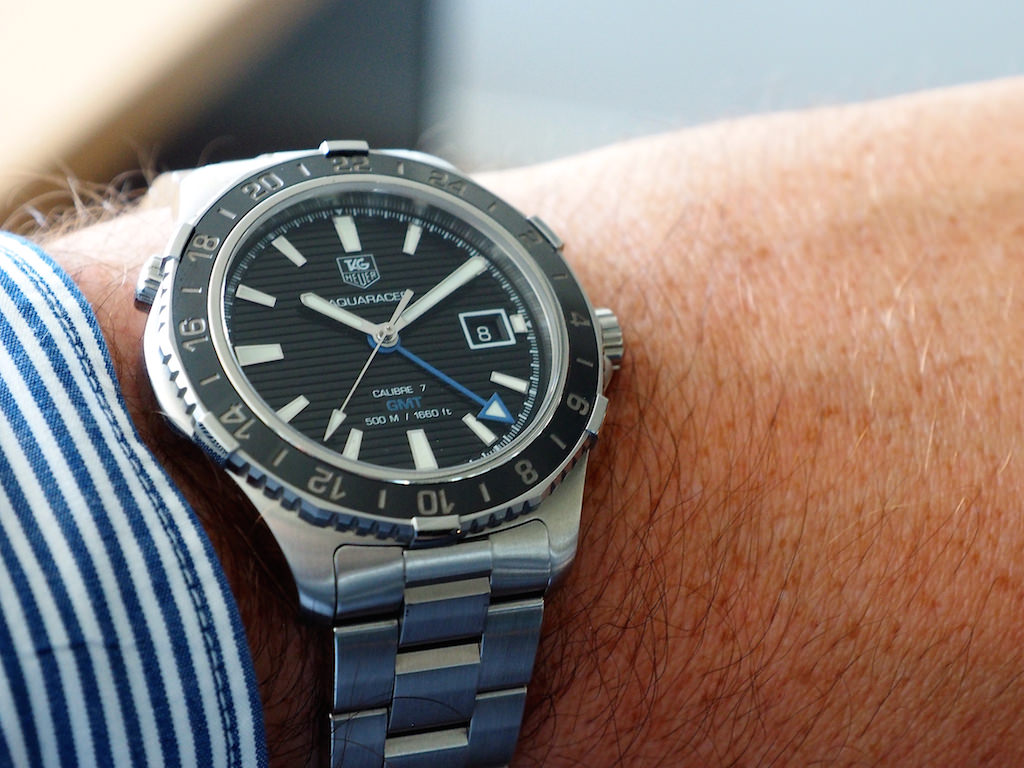 Even though the watch is basically very similar to the Calibre 5 model, the bright flash of blue and additional hand does catch the eye and lift the overall look of the watch into something a little more special. 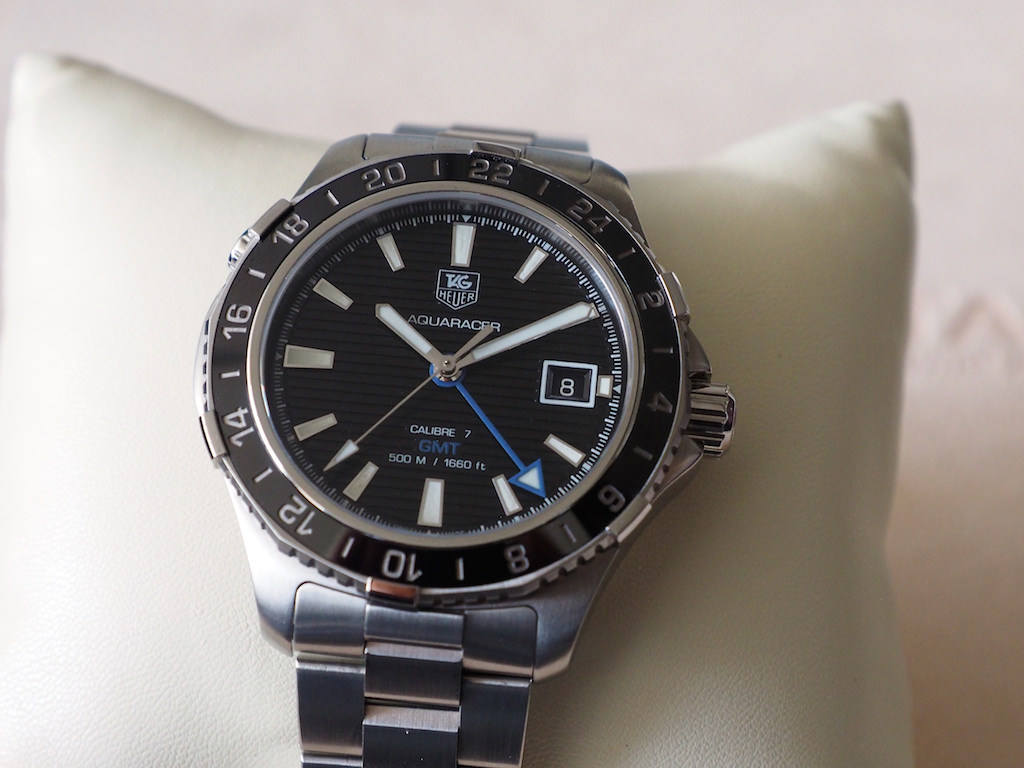 You can only buy the Aquaracer 500m GMT Calibre 7 from TAG Heuer boutiques, part of TAG Heuer’s ongoing strategy to offer a handful of exclusives to its own retail channel each year. The watch retails for US$3,300, compared to US$2,950 for the non-GMT Calibre 5 version. The watch is available now, with stock likely to be tight given the limited distribution. 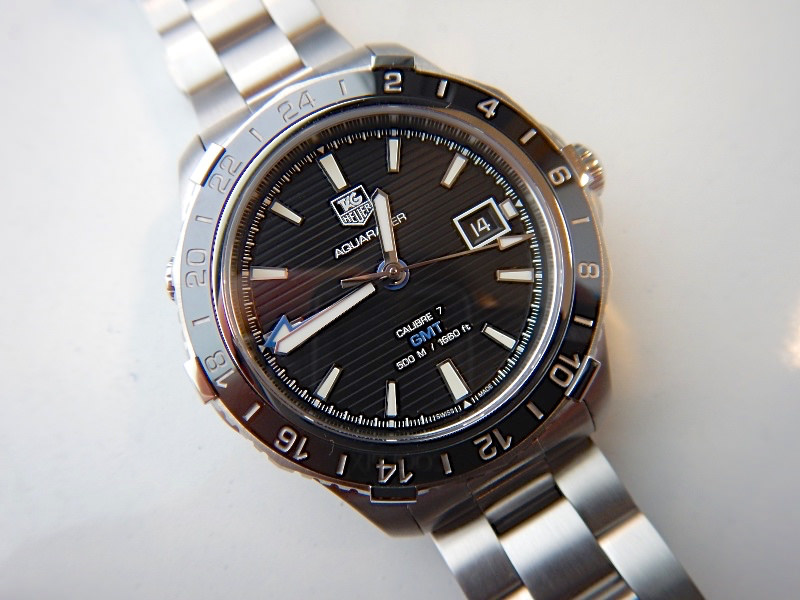 Not a significant change over the Calibre 5 Aquaracer 500m, but we liked that watch anyway, so the GMT complication adds additional features with only a small price increase. Would be good to see the GMT as a regular part of  the range, perhaps with the Blue/ Red Pepsi bezel to differentiate the watch further from others in the Aquaracer range. 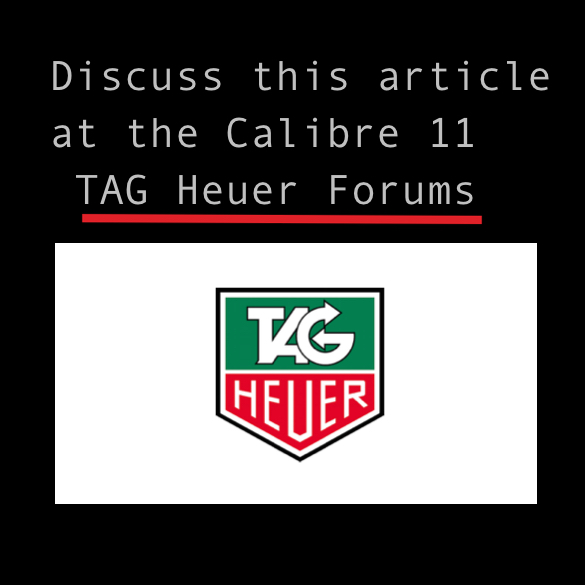 Photos by Virgile Fontaine and Calibre 11