While some thought that TAG Heuer’s haute horlogerie ambitions would be cast aside with the change in the brand’s pricing and positioning strategy, the unveiling of the Carrera Heuer-02t demonstrated how the two ideas could work together. Yes, there was still room for high-end TAG Heuers using in-house movements- but they had to represent exceptional value. We first showed you the new tourbillon last year when the watch was announced, almost as a post-script to Baselworld 2015. But now we’ve had the chance to spend some proper time with the Heuer-02t to bring you this detailed review. You may know that there are two models in the range, but the early success of  the watch has meant that an additional two Rose Gold models join the family. 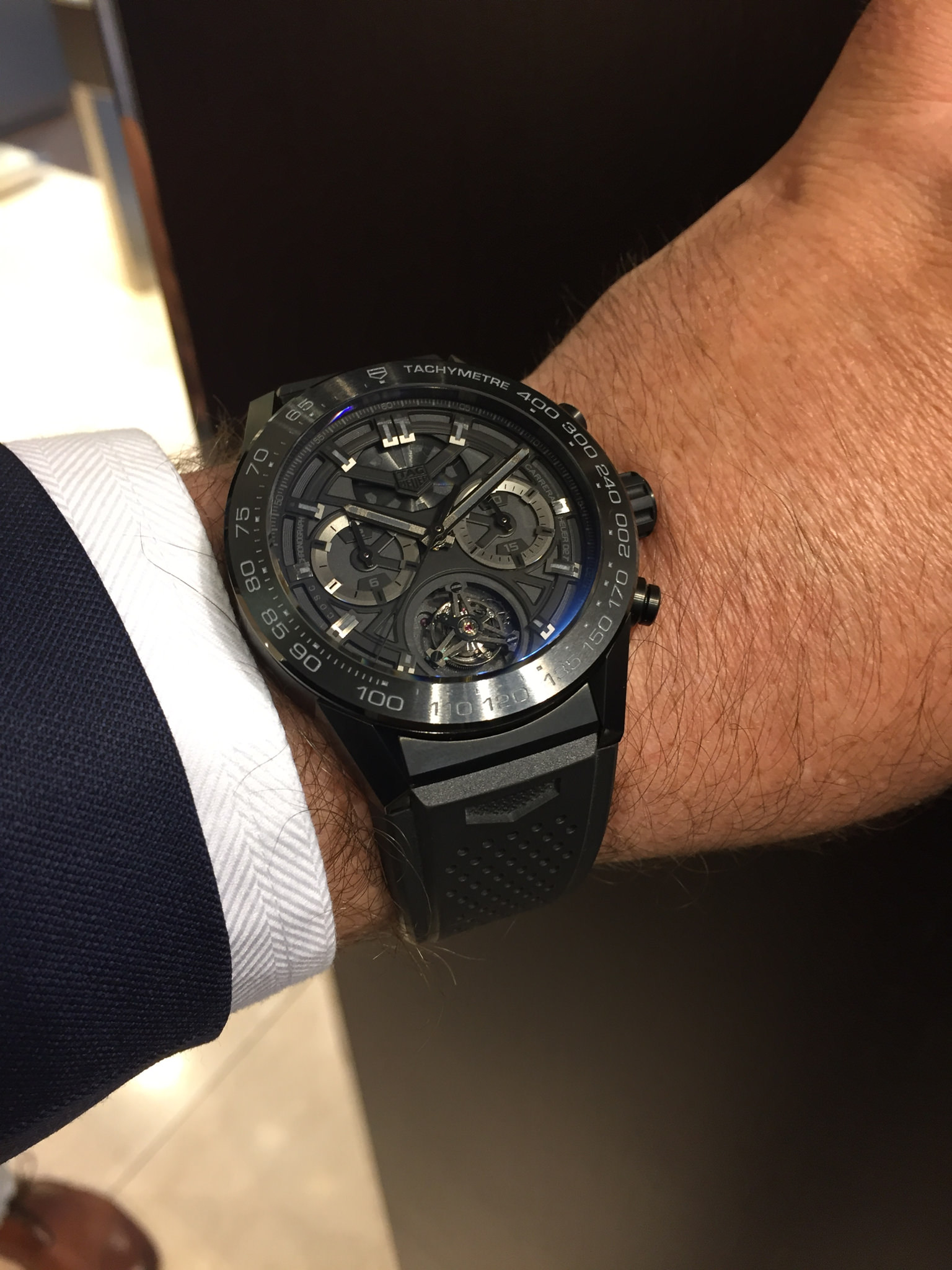 The Carrera has only changed marginally in the transition from concept watch to production model, and TAG Heuer has held firm with it’s promise of pricing the watch at levels unheard of for a tourbillon, prompting some shrill comments from the usually unflappable Patek Philippe CEO Thierry Stern. But there is no voodoo at play here- as we’ll tell you, there are some very good, logical reasons why the watch is priced the way it is, despite the bleats from Geneva. 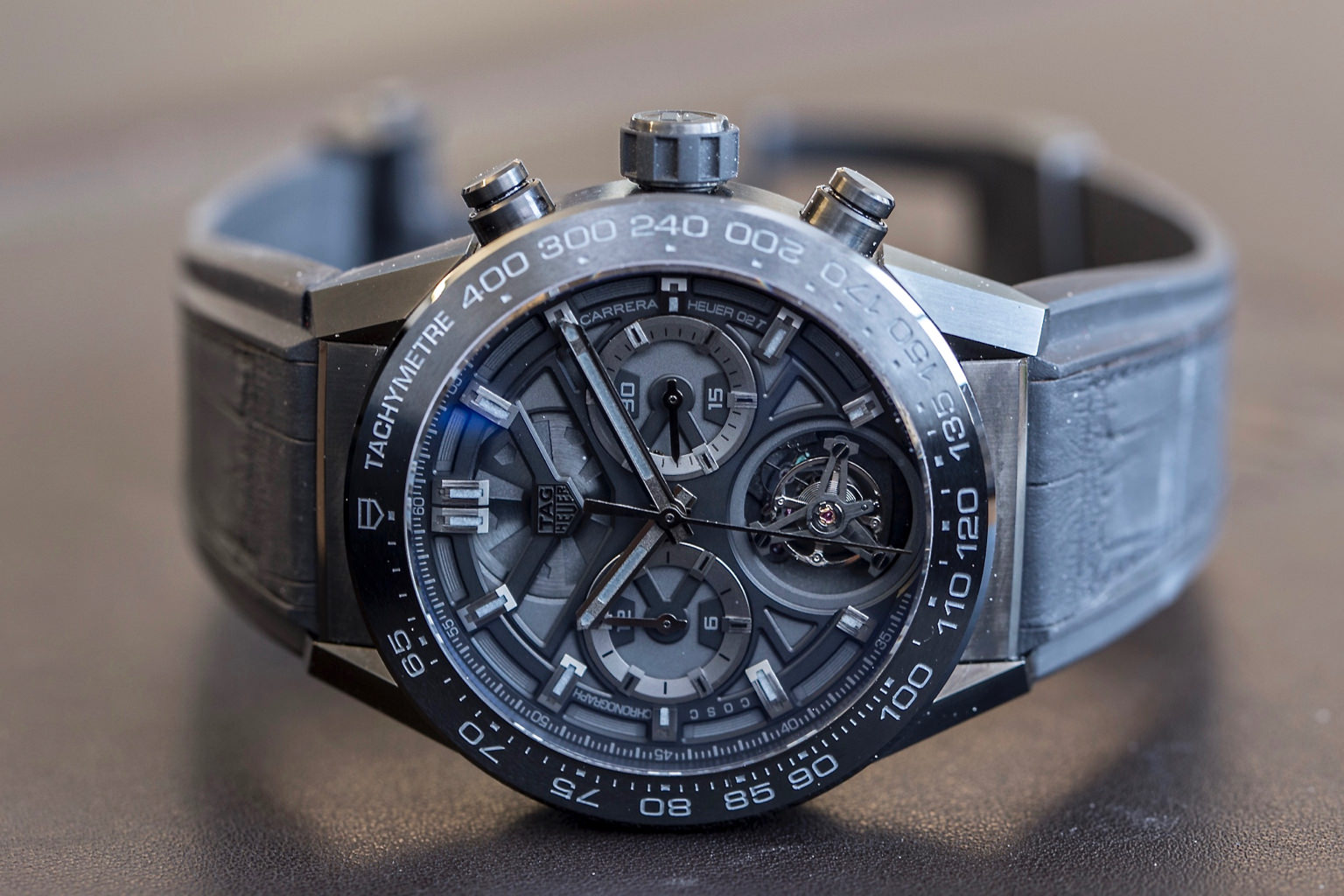 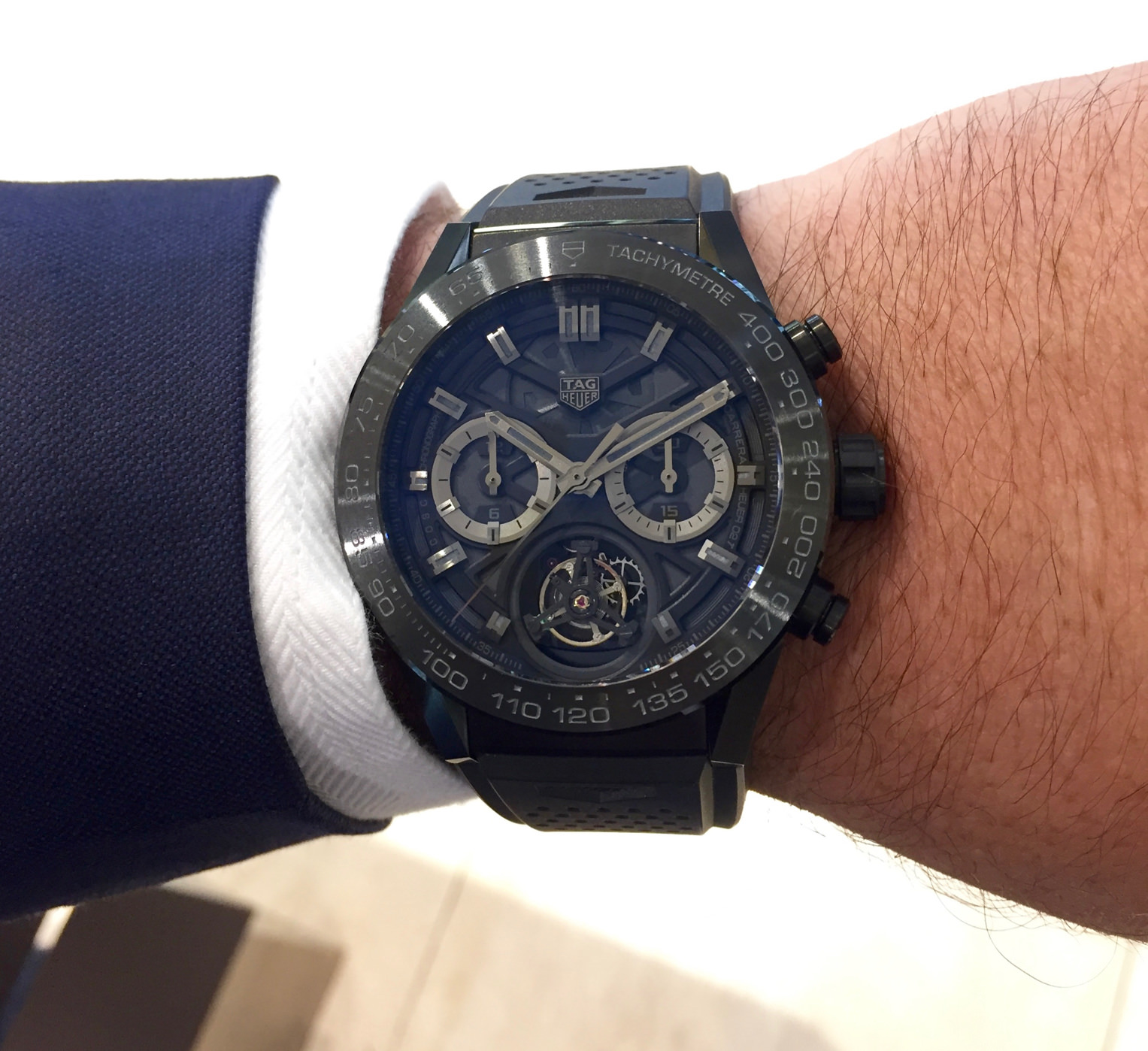 The Carrera Heuer-02T is based on the same case design and modular principle as the Carrera Heuer-01. The 45mm case is made from titanium on all variants- what changes between the various models is the finishing of the centre case, and the metal used for the lugs and the bezel. 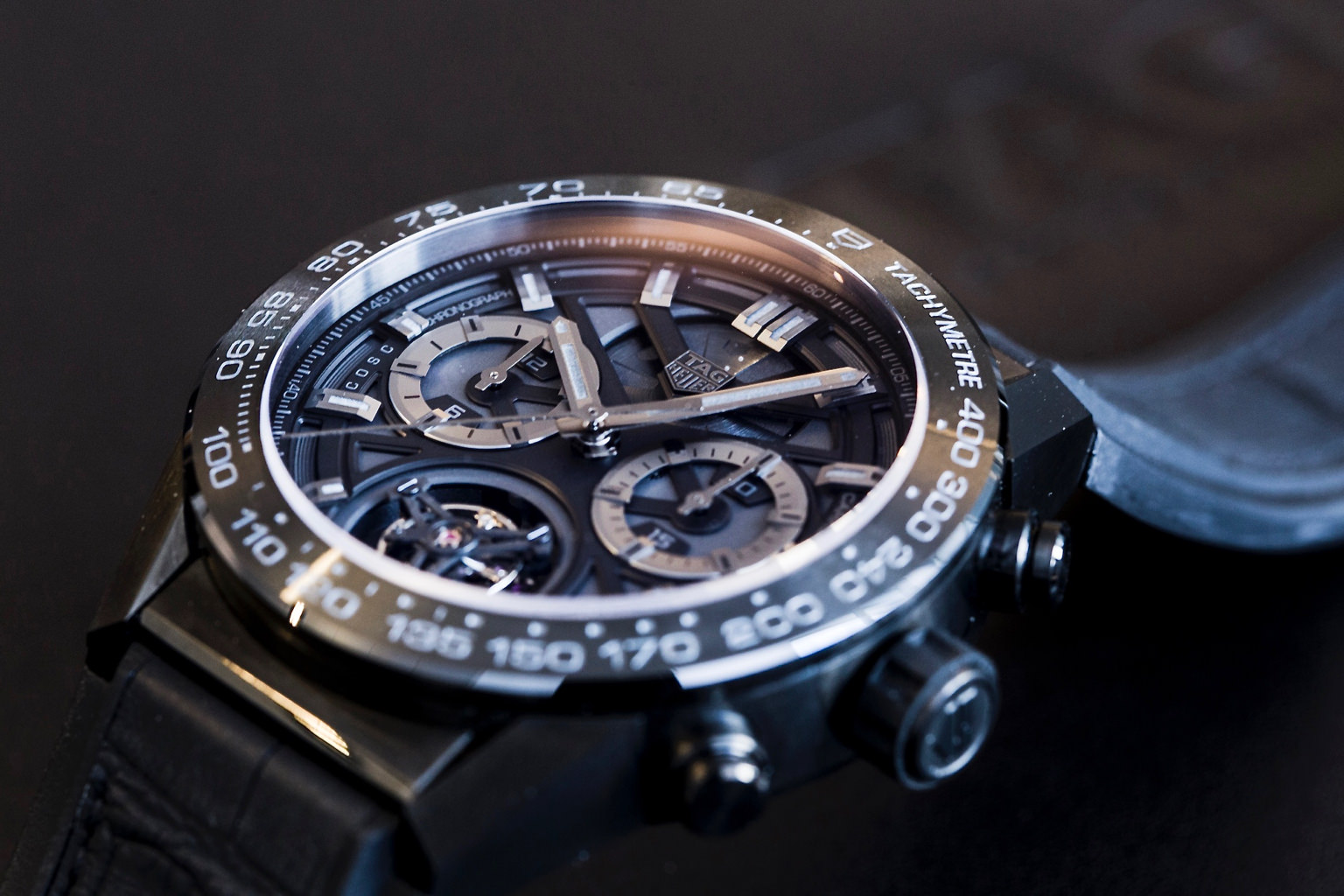 What sets the watch apart from the Carrera Heuer-01 is the dial. While the sister watch features a skeleton dial, the Carrera Heuer-02’s dial is more of a hybrid between a full skeleton dial and a traditional dial. It’s an industrial look that will either be one of the main reasons that people buy the watch, or conversely be one of the reasons they won’t.

Flip the watch around and you’ll see a sapphire crystal offering a window to the Calibre Heuer-02t, a reworked version of TAG Heuer’s Calibre CH80. 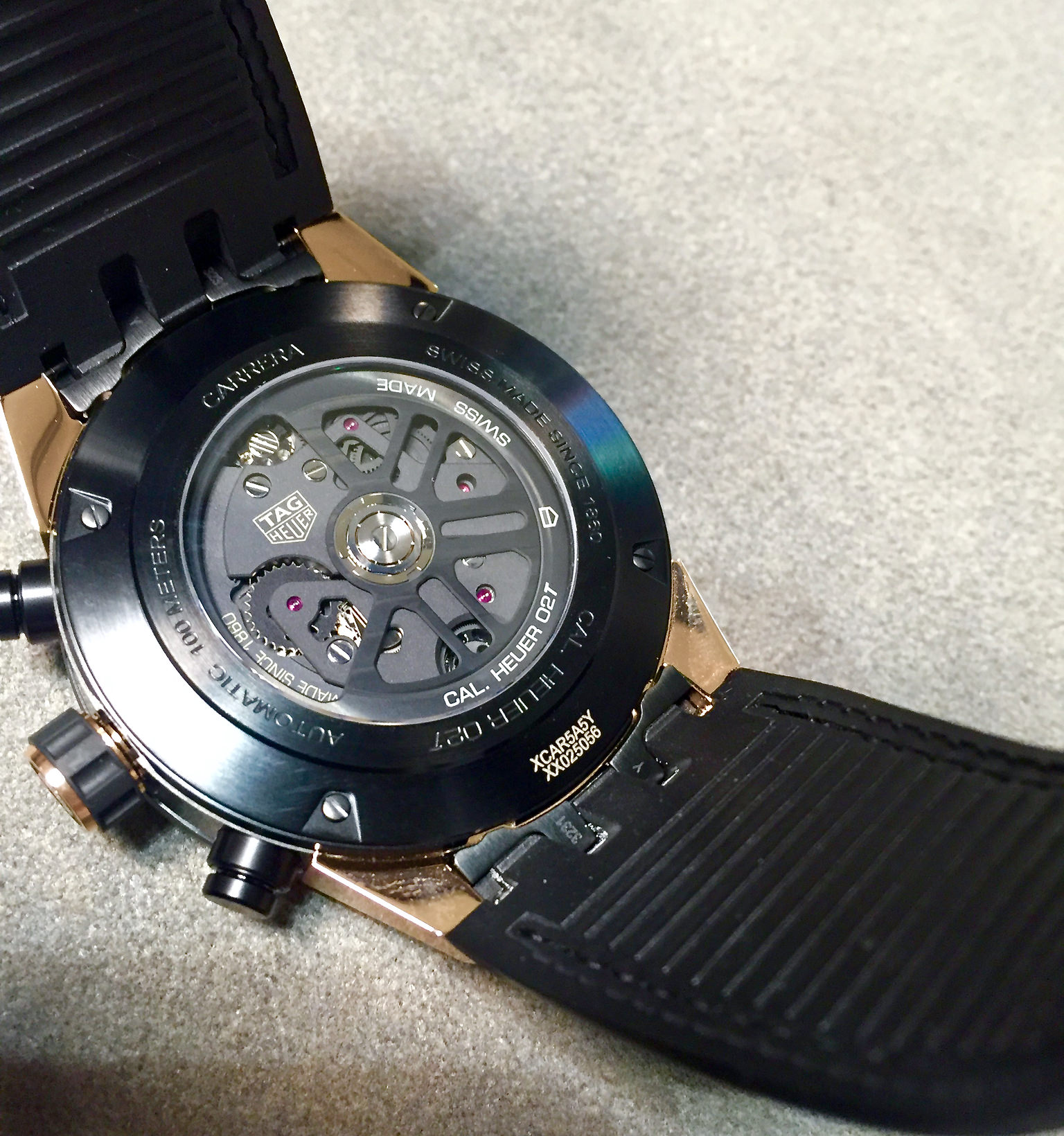 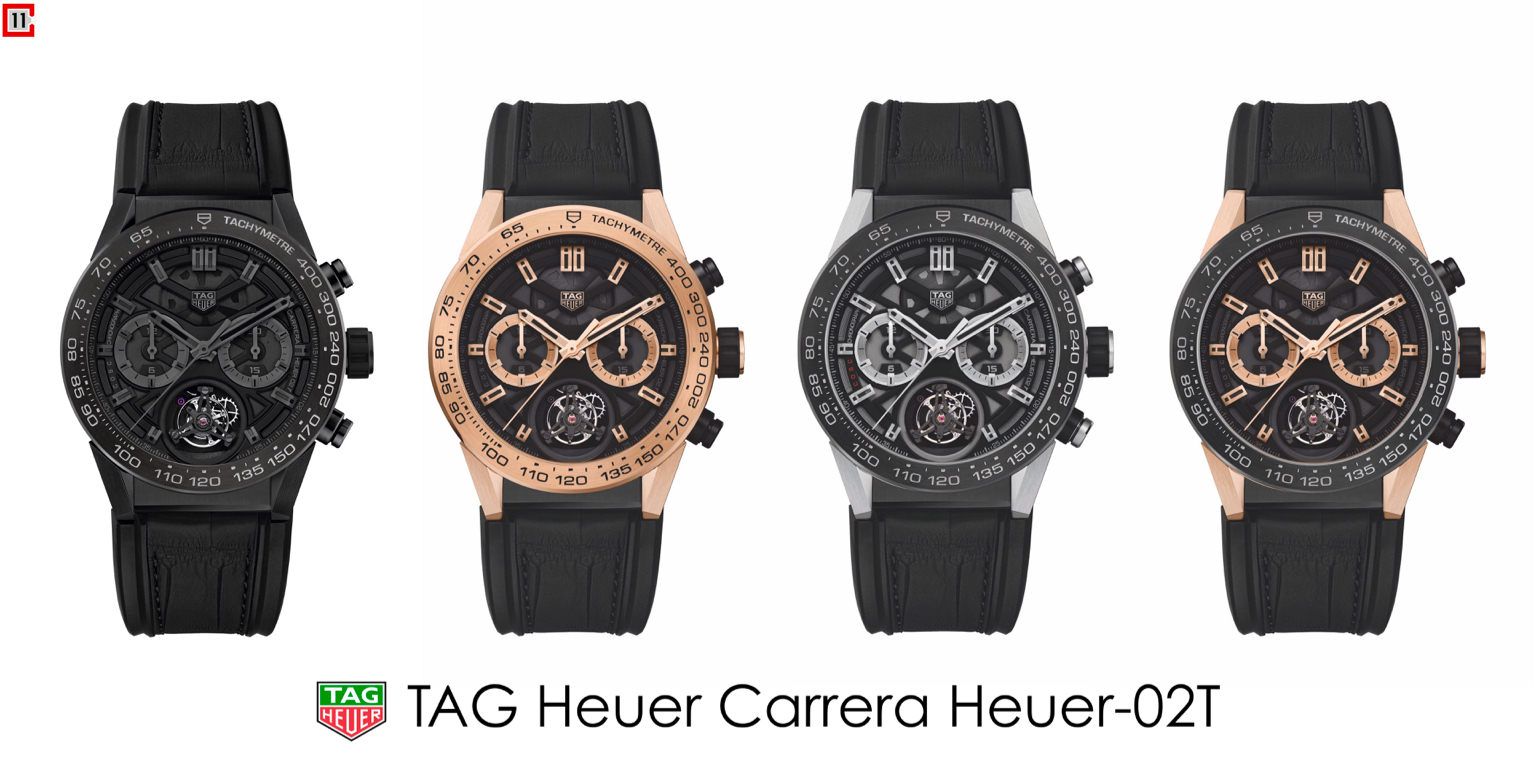 The full family of the Carrera Heuer-02 can be see above for the first time, with two Rose Gold models joining the two titanium watches we’ve already seen. 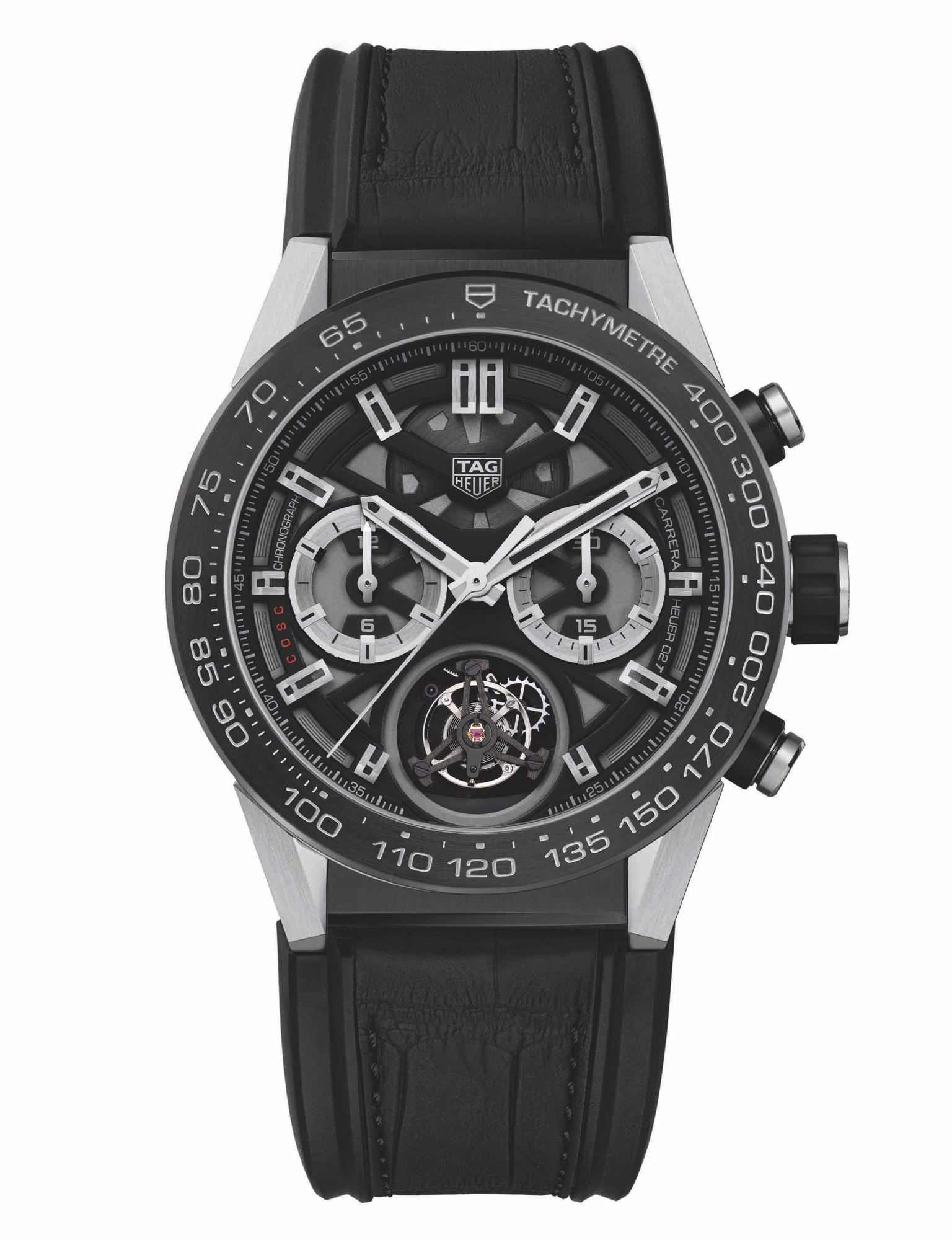 Opening  the range is the titanium model, which combines a brushed titanium centre case and lugs. The only “black” titanium carbide element on the watch are the end pieces for the strap. One unique aspect to this model is the red “COSC” lettering, which is white on all other models. The black bezel is ceramic, with a grey tachymetre scale. 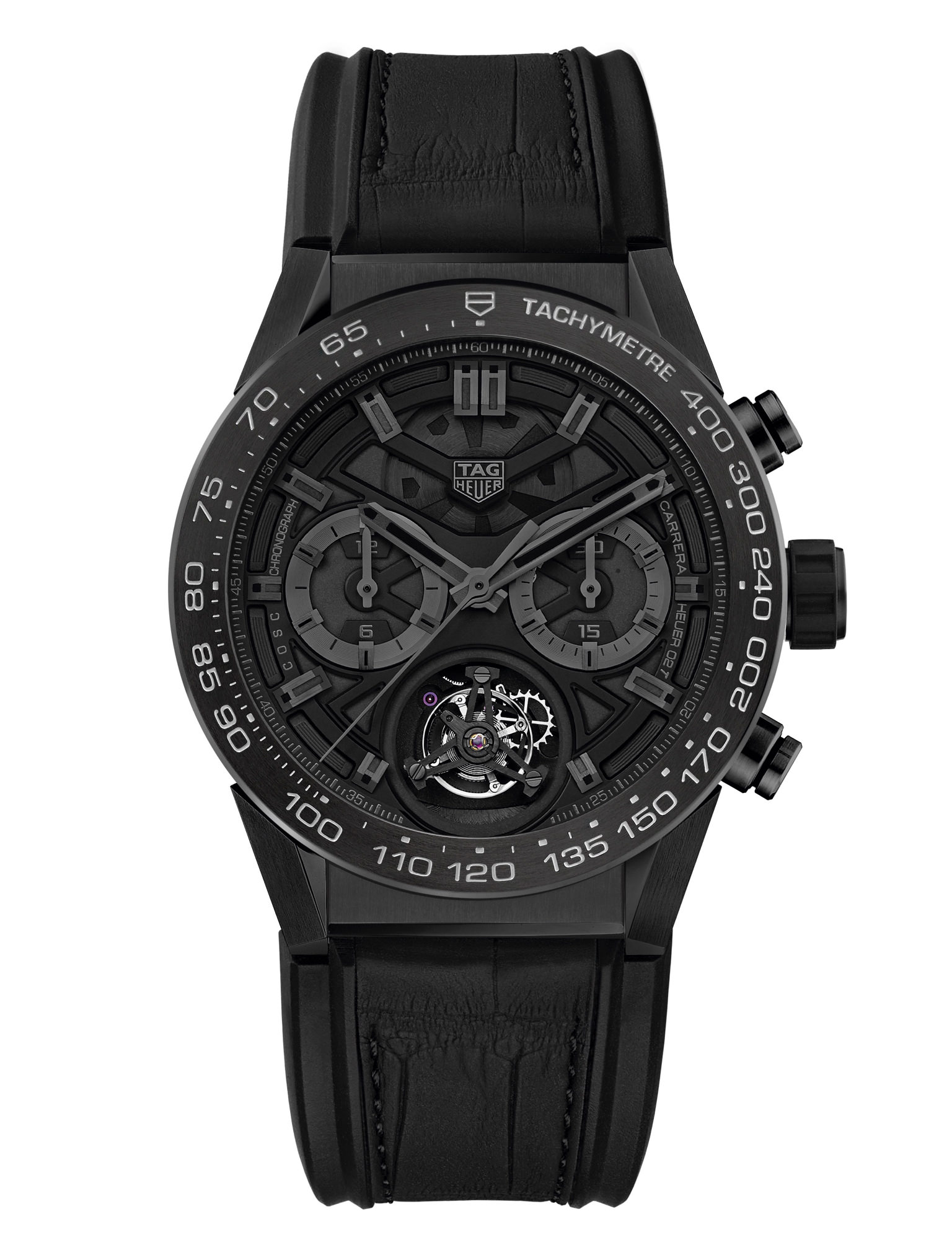 The second model is the all-black Phantom, limited to 250 numbered watches. Think of the Phantom being the same watch as CAR5A8Y, but with every metal element coated in black titanium-carbide. The only respite from the full black treatment is the tourbillon itself, which is the same across all watches. 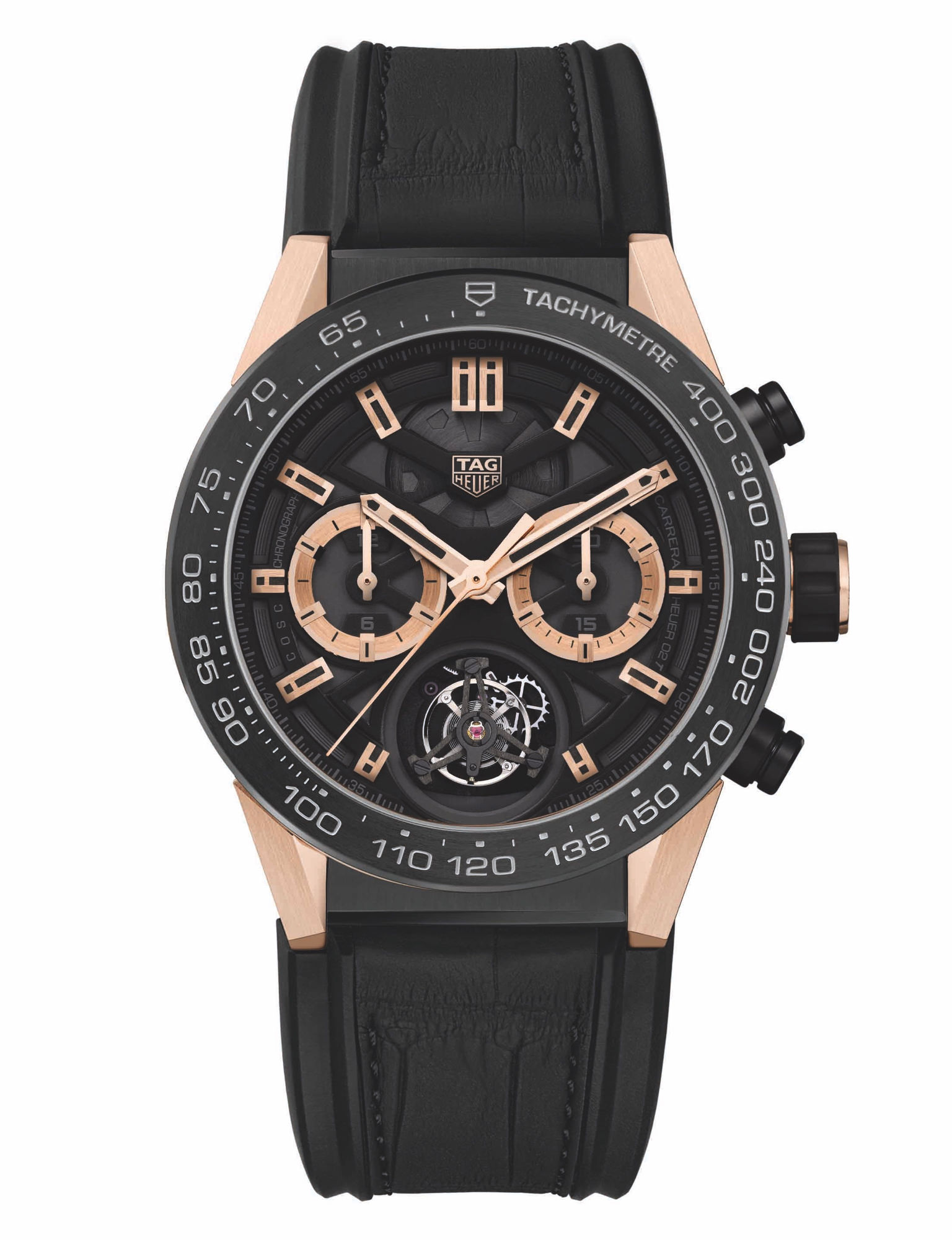 This is the first of the 2016 models, and combines a titanium-carbide coated centre case (same as the one used on the Phantom), with Rose Gold (18k 5N) lugs. The hour-markers are Rose Gold plated, as are each of the hands. The bezel is the same as that used on the two titanium models above. 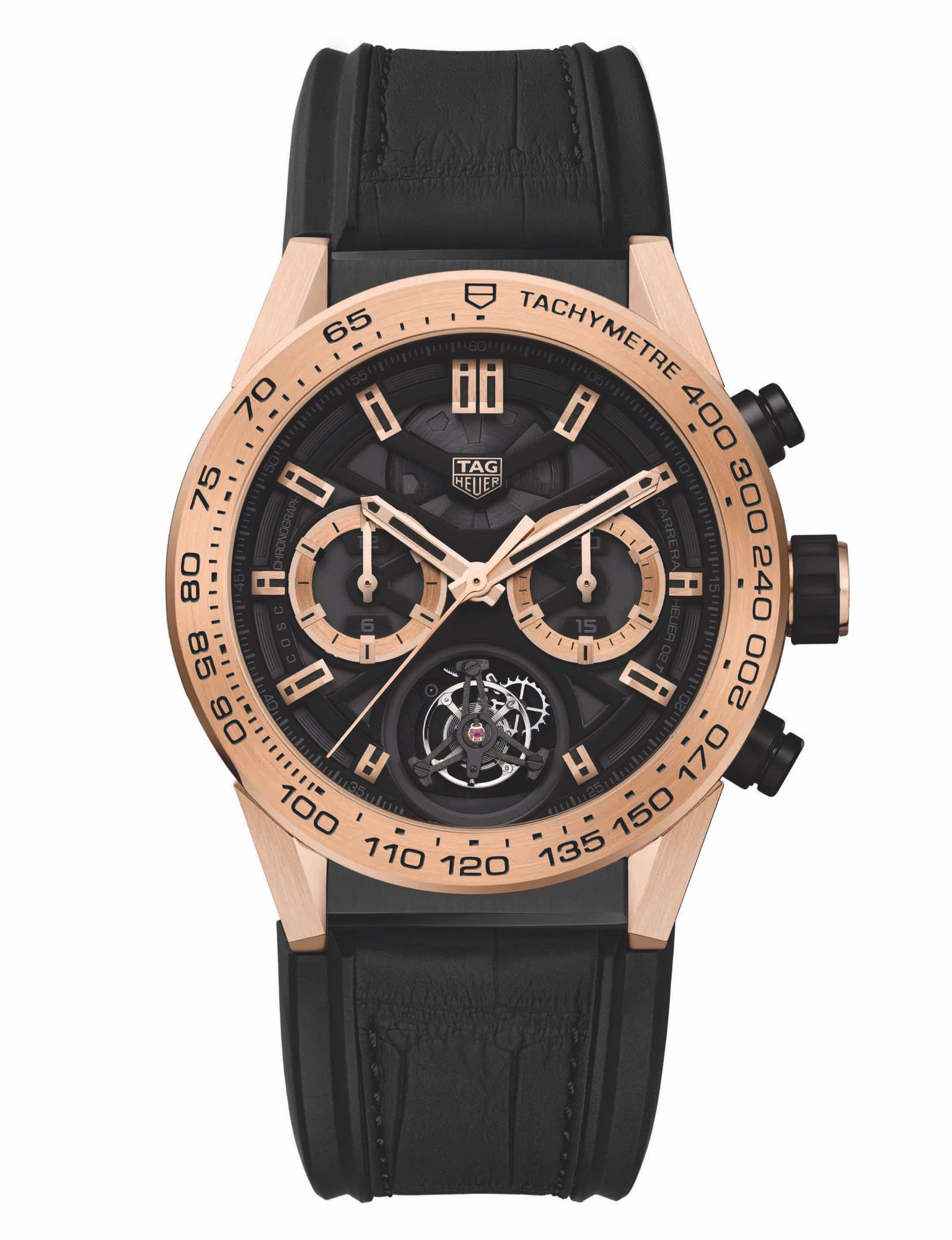 And finally we have CAR5A5Z which is the same watch as CAR5A5Y, with the exception of the bezel which is also rose gold rather than being ceramic. 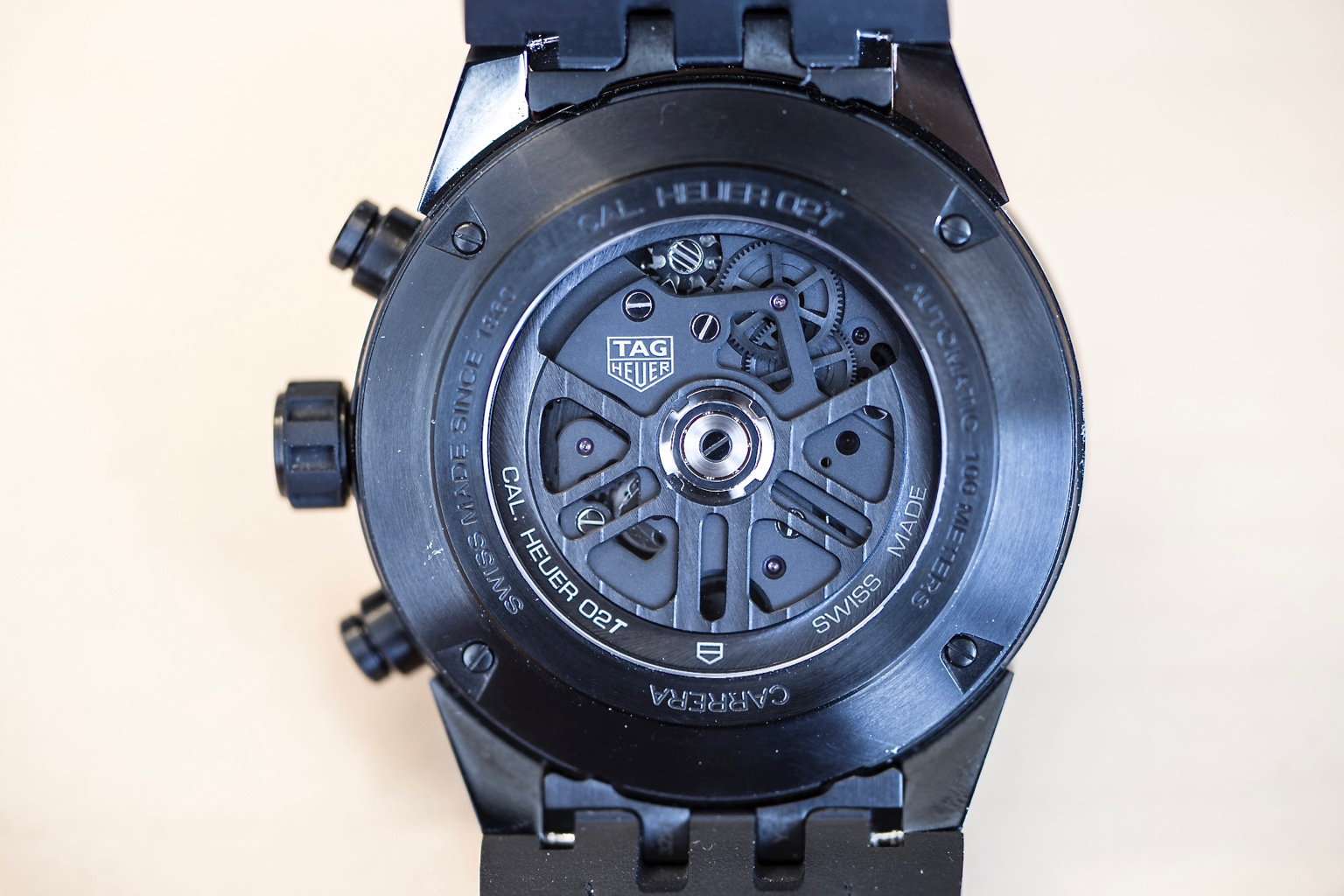 As we’ve talked you through previously, the Heuer-02t movement is a development of the CH80, TAG Heuer’s own COSC Chronograph movement. As well as sitting at the heart of the watch, the tourbillon sets the movement apart and is also one of the “secrets” to the watch’s pricing. 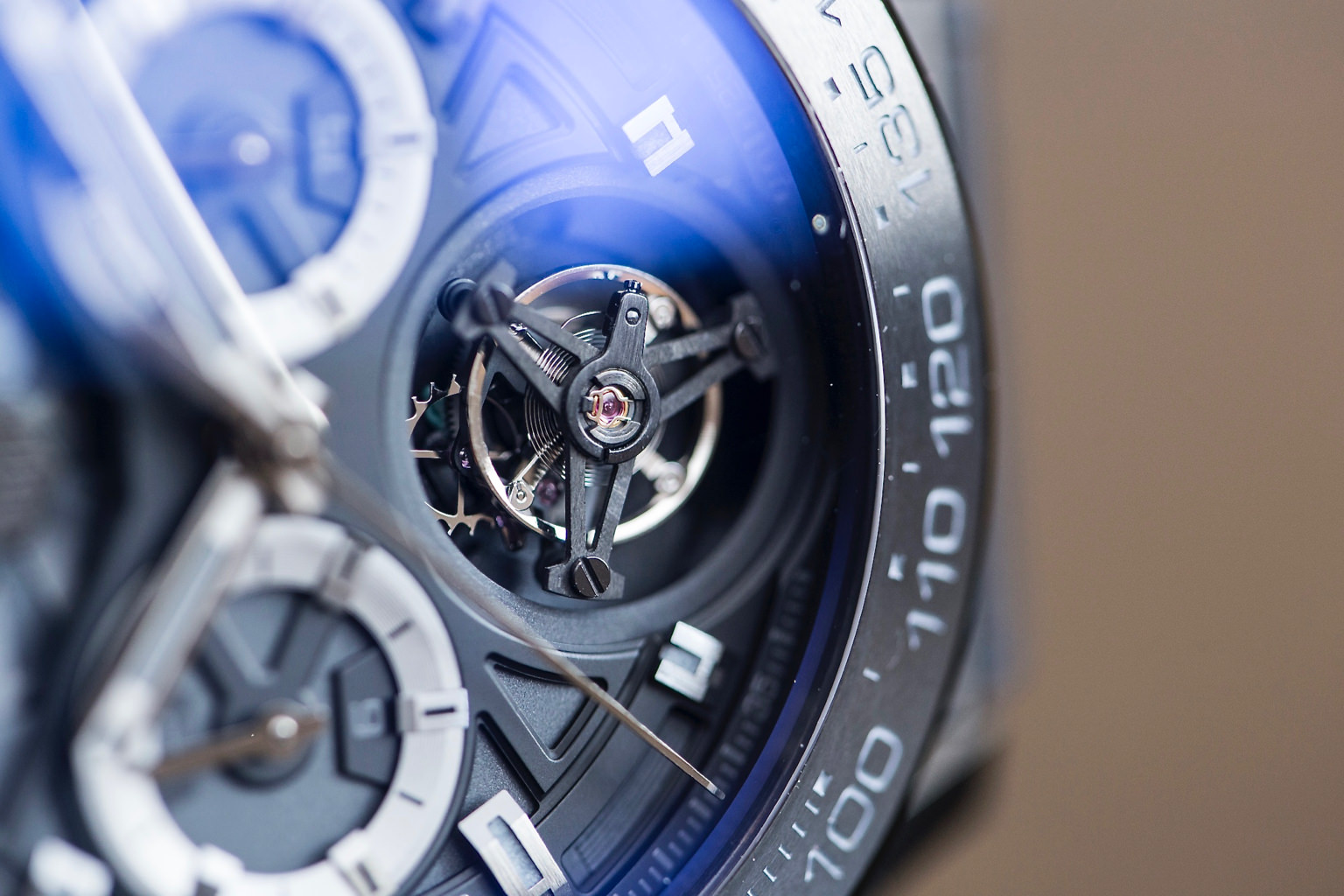 Last year I visited a number of manufacturers and saw the way that tourbillon movements and minute repeaters are finished. Finishing and polishing these components by machine can take less than 20 seconds, while using a hand tool may mean 2-3 hours. Most tourbillons are hand-finished and polished with no electric tools, meaning 2-3 days of time just on the polishing. A Piaget minute repeater has 1400 hours of finishing before it’s done, which explains its price. 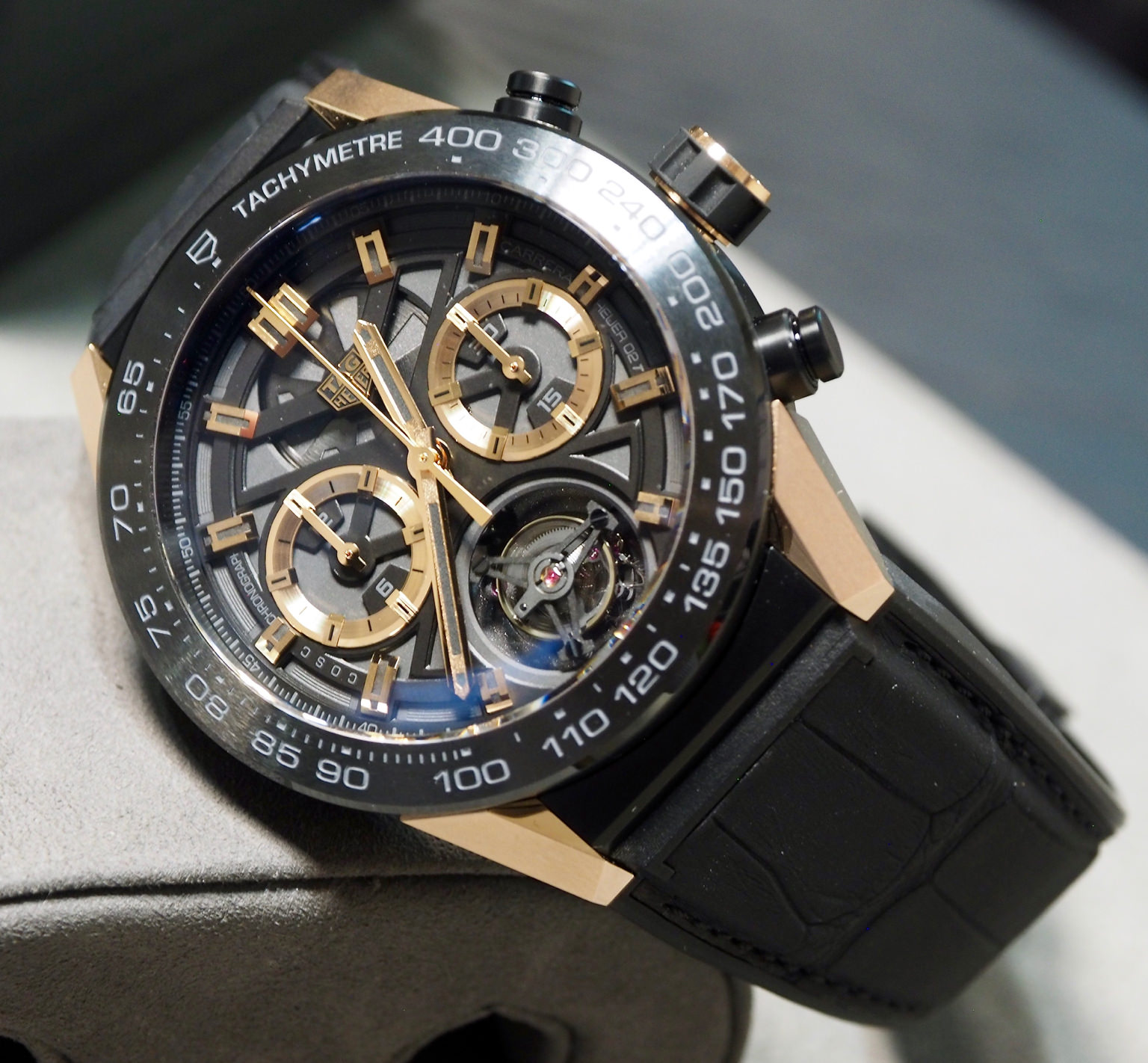 The Carrera Heuer-02t does not have this degree of hand finishing on the movement. Look at the movement under a loupe and you’ll see that it’s very well made and finished, but we’re talking about a different level compared to what you’ll see on a +$100k tourbillon. The movement works as well as those movements, it’s Swiss made, like those other movements, and it’s “in-house”, like those mother movements. But by saving on the amount of hours dedicated to hand polishing, the result is a watch that costs $15,000 and not $150,000. 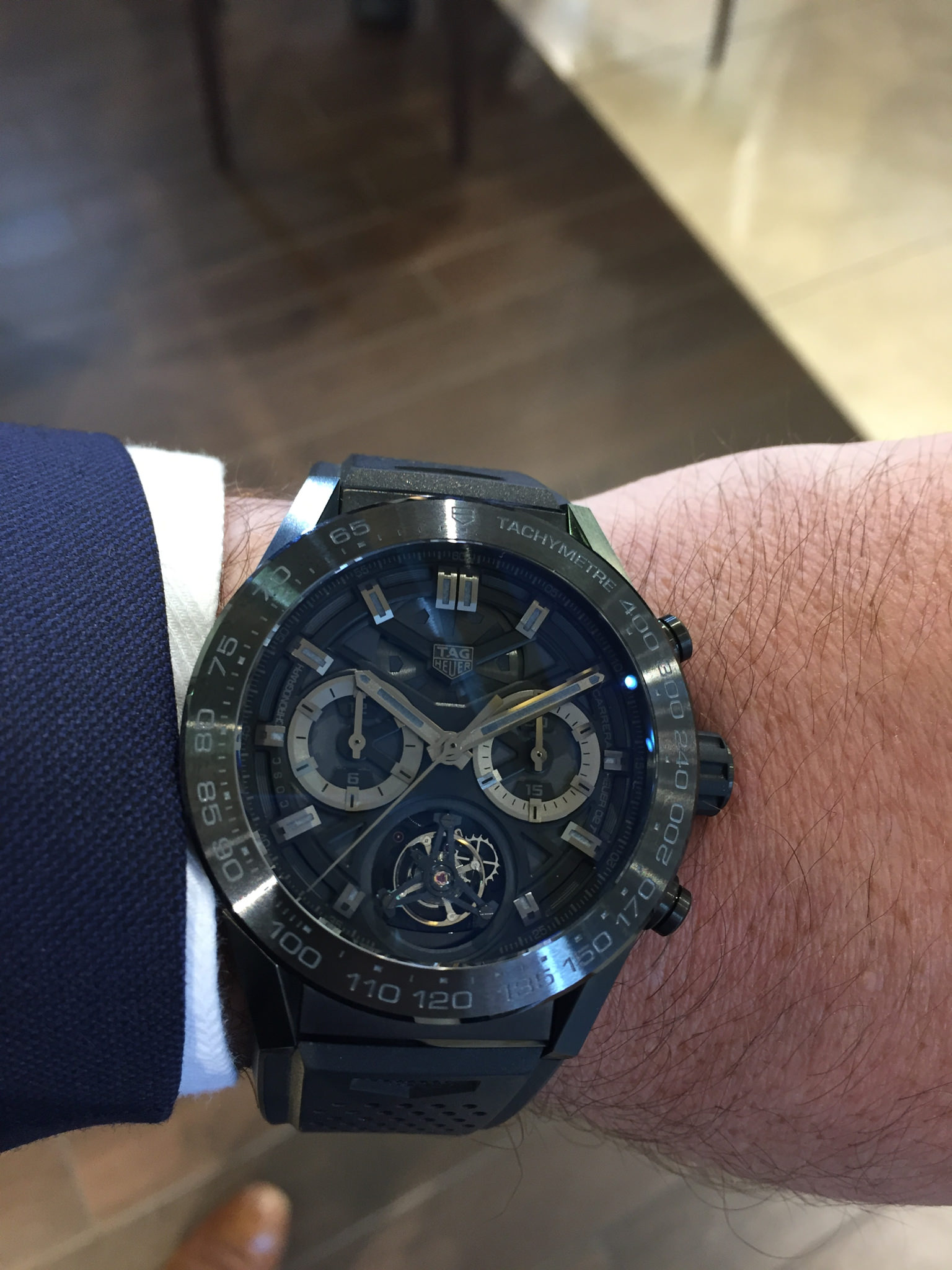 The Heuer-02t feels lighter on the wrist than you’d expect from a watch of this size thanks to  the extensive use of titanium. Importantly, it also feels special. The final version of the strap (not the one shown in these shots) is a wonderfully soft rubber with an alligator leather outer. 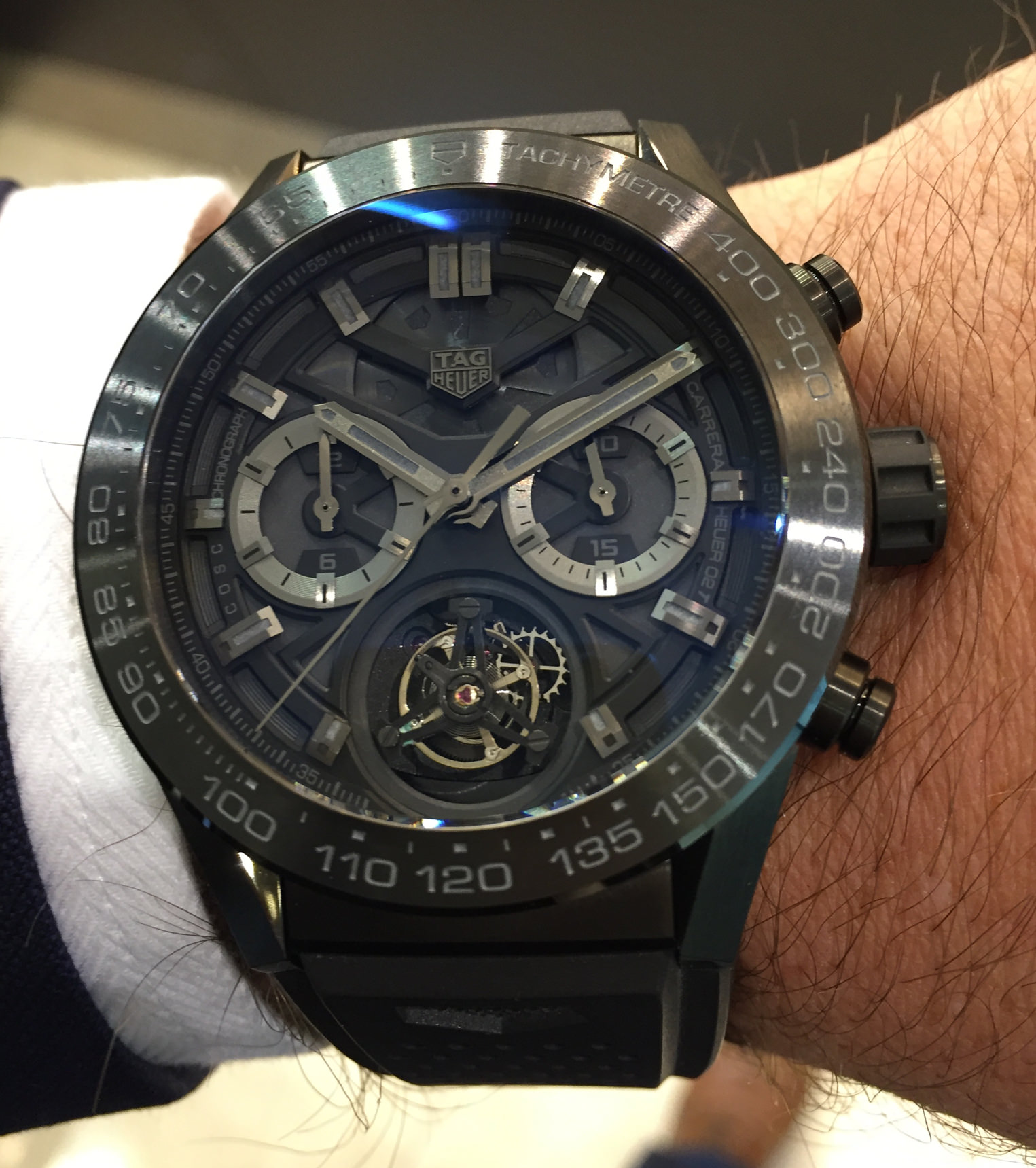 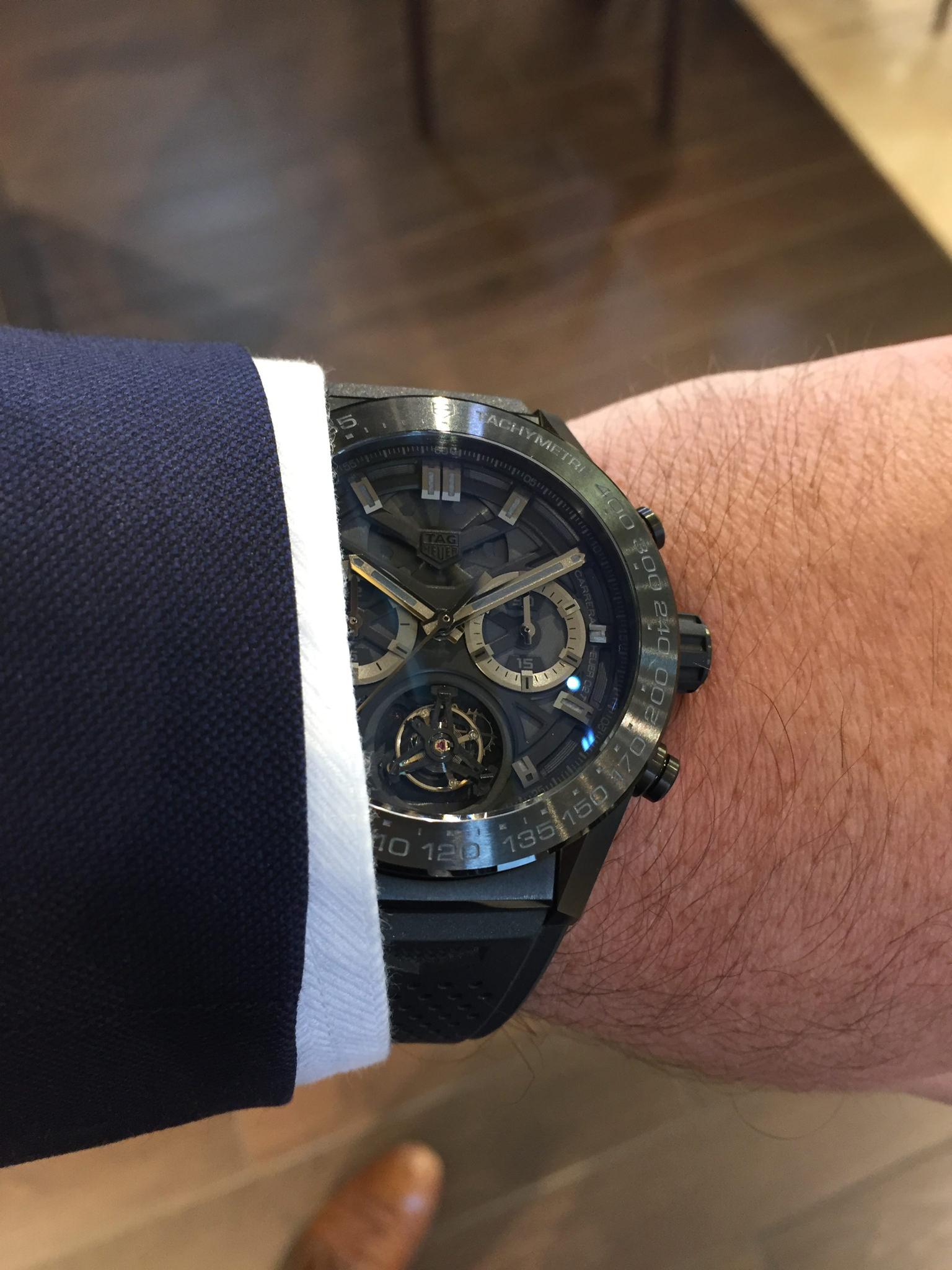 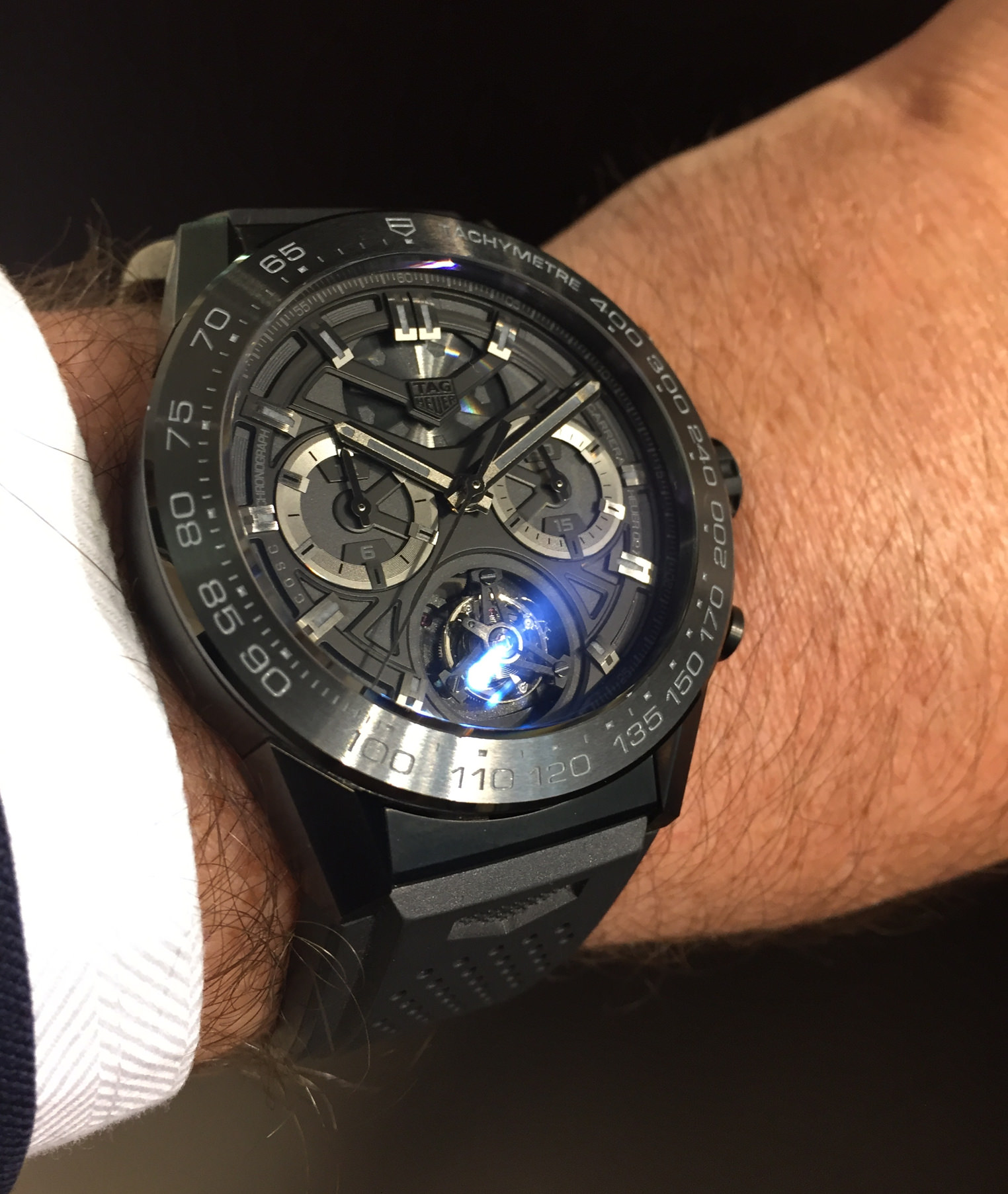 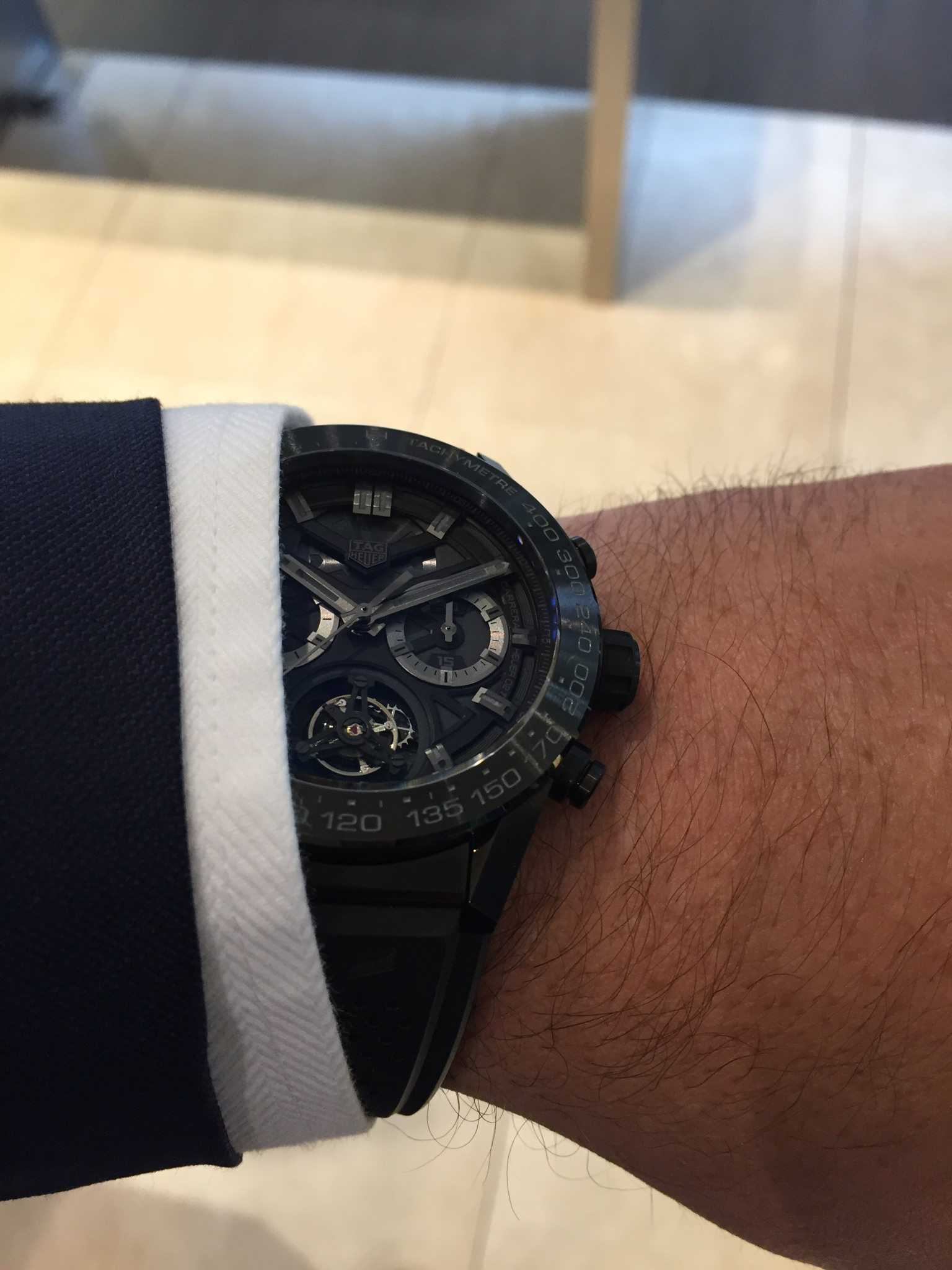 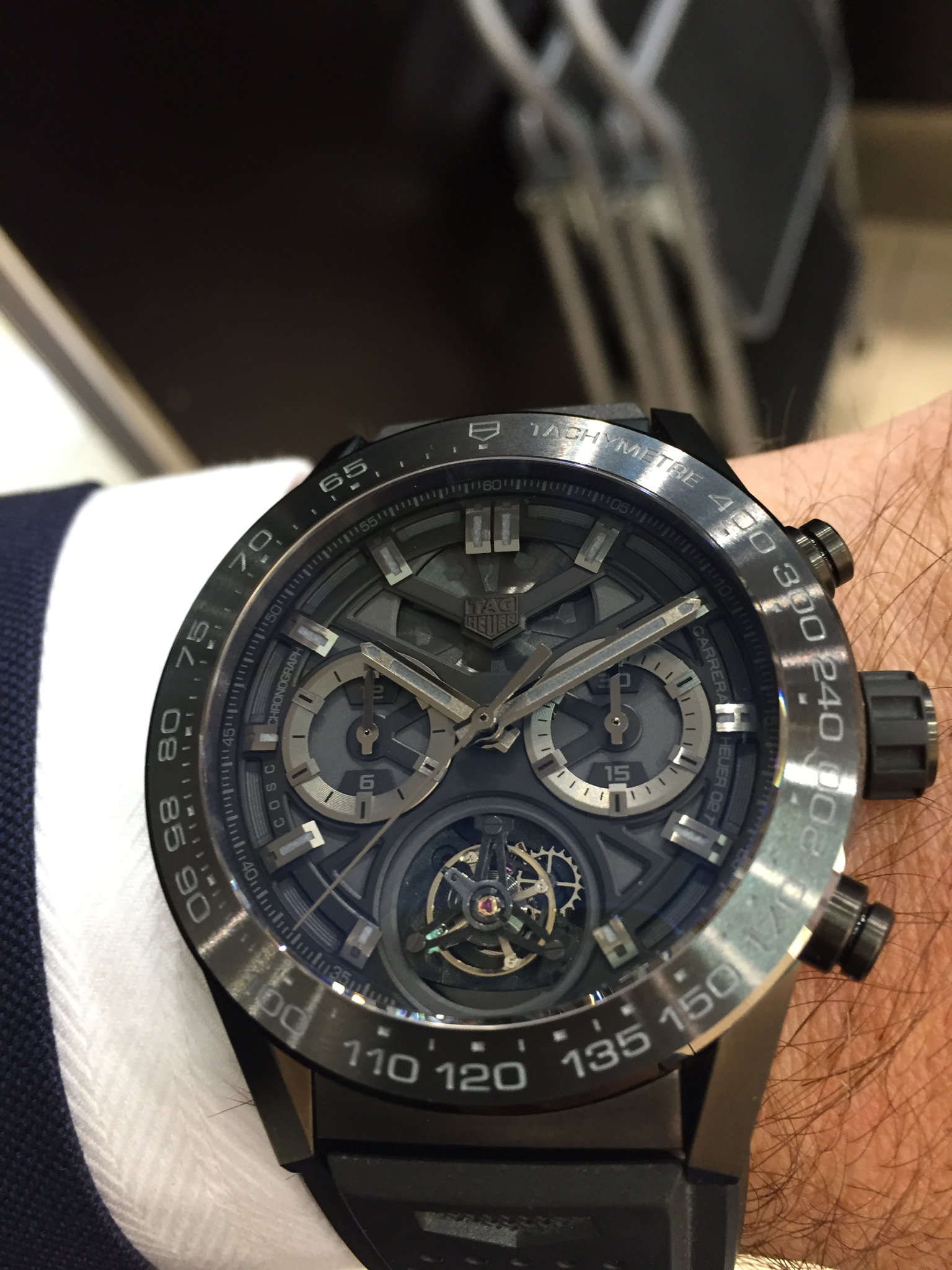 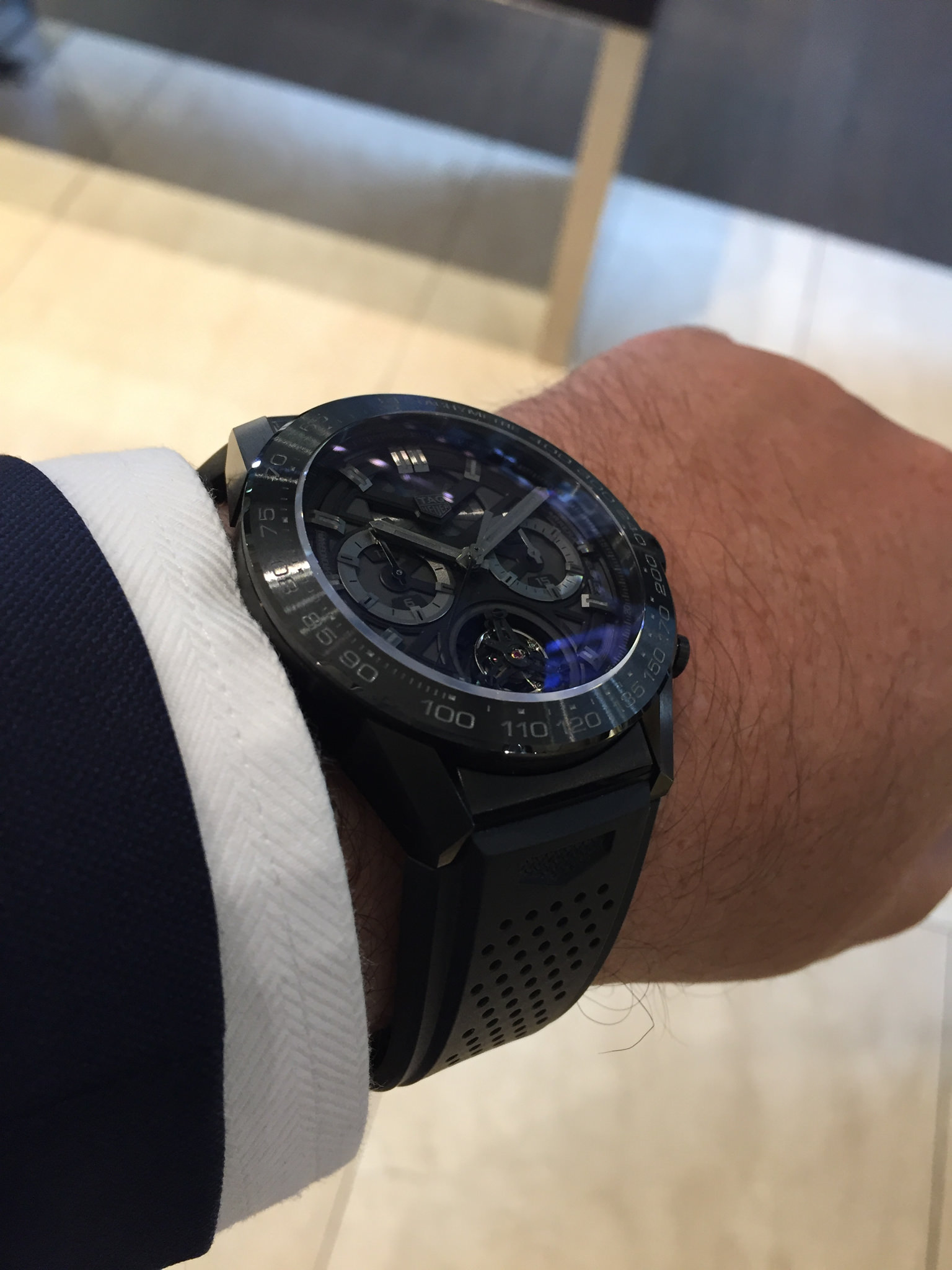 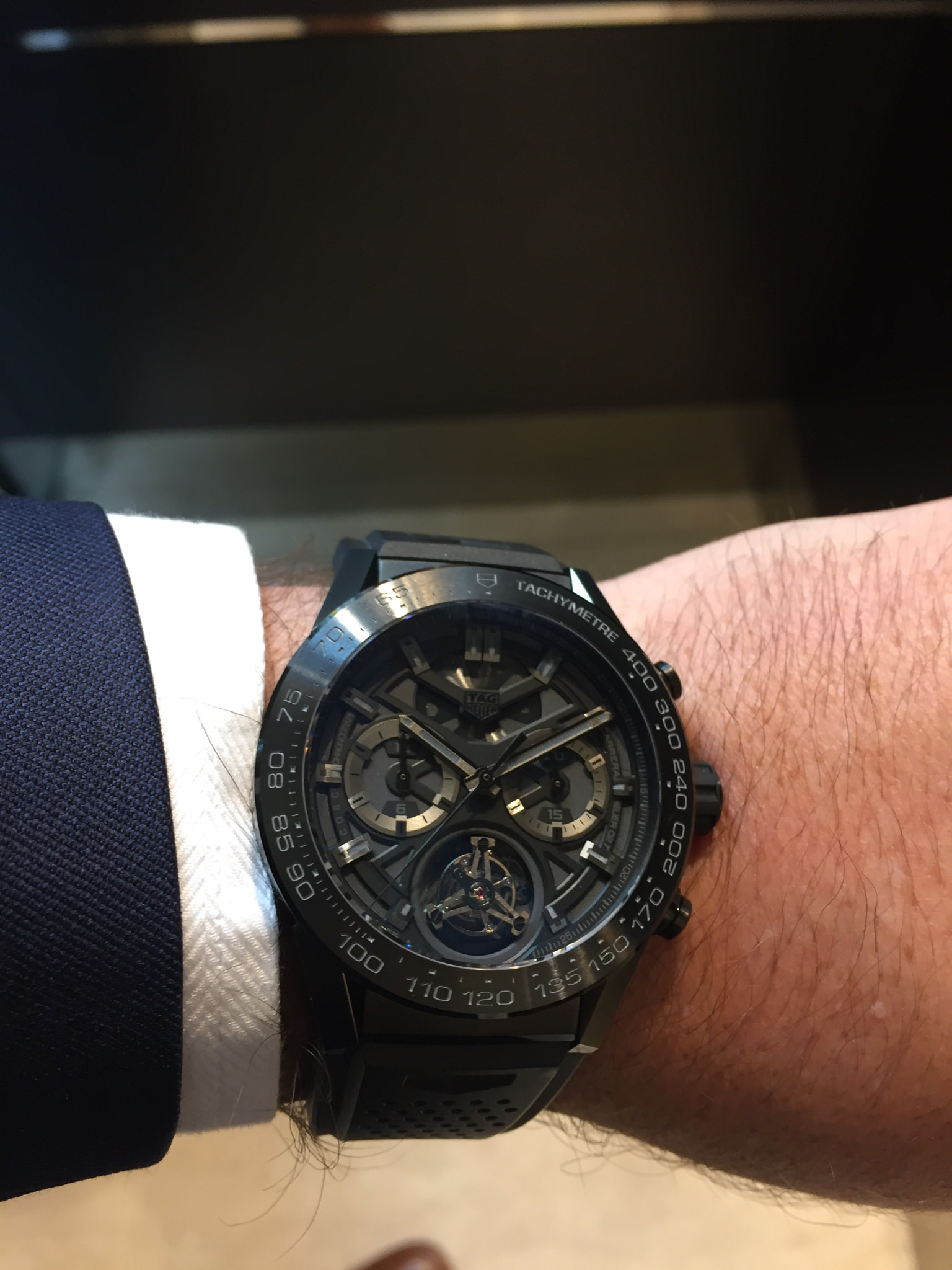 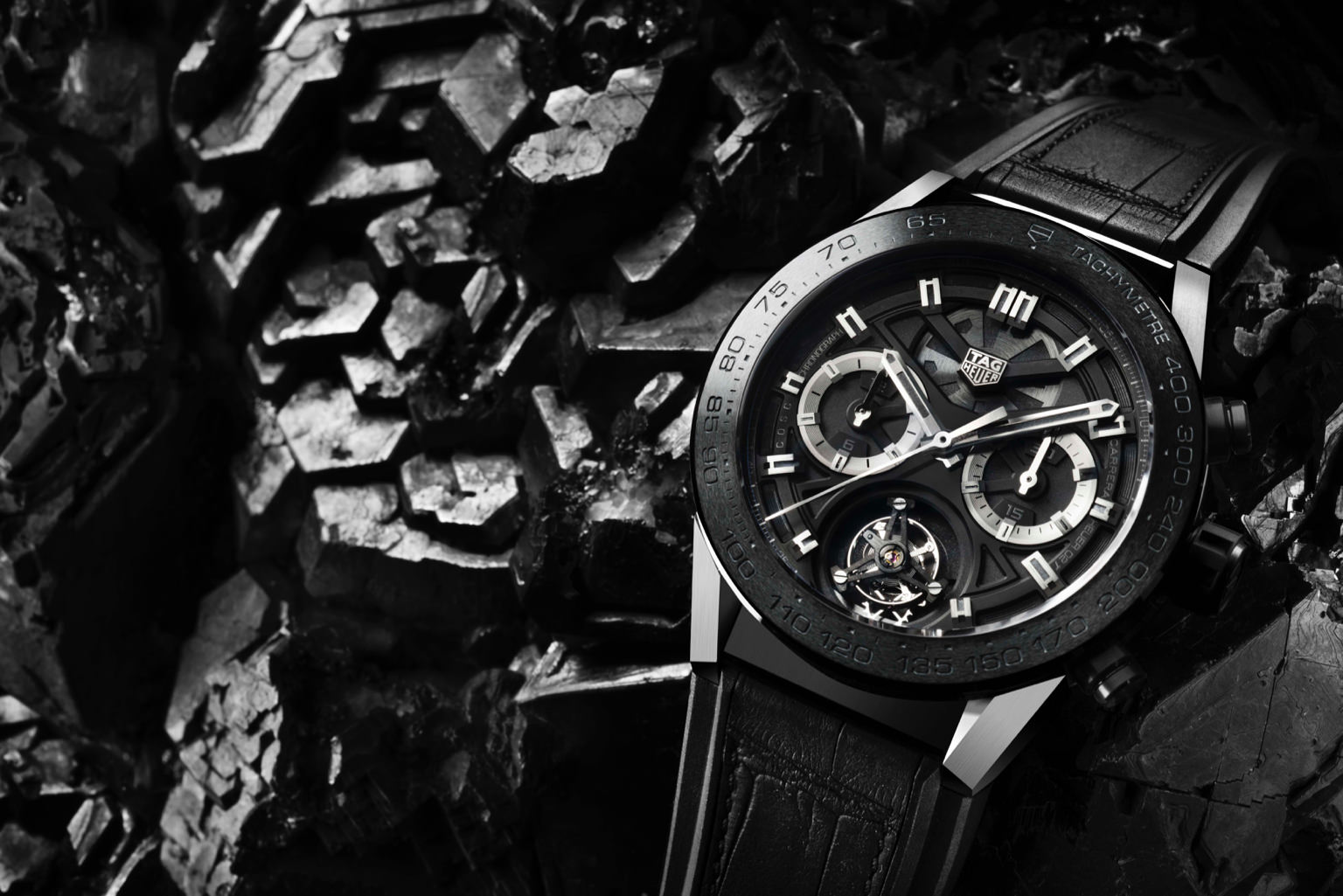 The good news for those of you waiting for the Carrera Heuer-02T Tourbillon is that you don’t need to wait long for the watches to arrive- they’re only a few weeks away, arriving in July. Pricing is as follows in the three key markets: