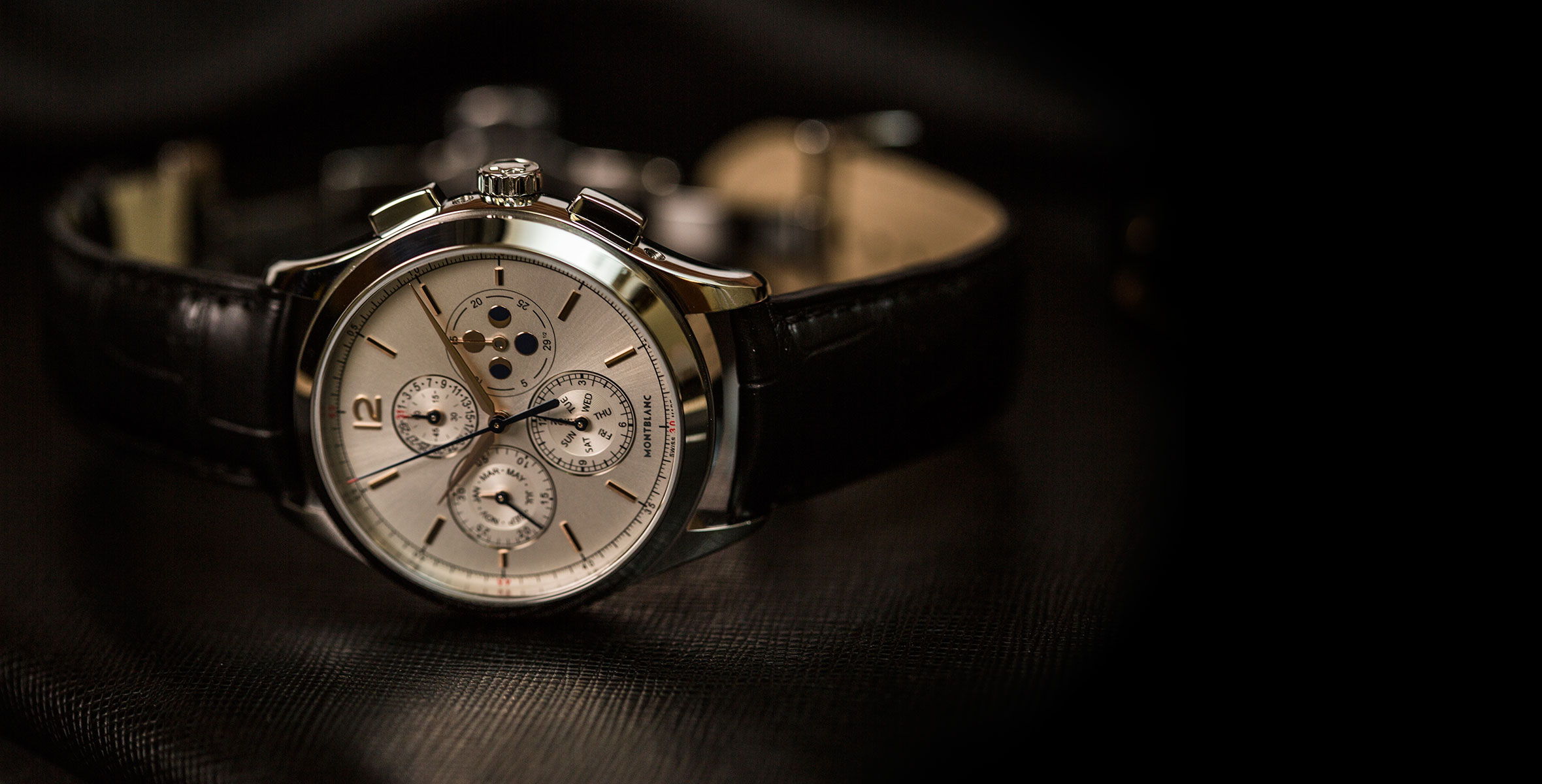 Jerome Lambert descended, whirlwind-like, on Montblanc in 2013. His presence was felt immediately, as the global luxury giant began turning out increasingly impressive timepieces, many with a complicated, heritage bent. Then, as suddenly as he had arrived he was gone, elevated to the rank of Richemont Group Head of Operations in a recent reshuffle. And while he may be running out the clock as Montblanc CEO (replaced by former Head of Sales Nicolas Baretzki), his short tenure will leave a long legacy – a revitalised brand, a serious watchmaker, releasing some of the most competitive, compelling pieces on the market.

The Heritage Chronométrie Annual Calendar Chronograph is a prime example of that – bundling fan favourite complete calendar and chronograph complications into a classically styled package, all for under $15,000 in steel (there’s also a gold version).

One glance at the Annual Calendar Chronograph and it’s immediately clear that it’s a whole lot of watch. With four subdials, 10 hands and numbers everywhere, you’d be forgiven for taking a few seconds to orient yourself. Having said that, Montblanc has done a good job of keeping what could have been a chaotic dial as legible as possible. Basically what you’ve got here is hours, minutes, running seconds, day, date, month, chronograph with 30-minute and 12-hour counters and a moonphase thrown in for good measure. Clutter is minimised by using each subdial for chronograph and calendar functions, with the exception of the moonphase at three. And while Montblanc has played it quite safe with the overall design (after all, on this sort of highly complicated piece it’s best if form follows function) the stylised moonphase – with applied moon discs and a hand indicating the current position in the lunar cycle – is unusual. It’s the most polarising feature of the watch, and while I’m used to the more traditional moon aperture, I appreciate that Montblanc’s layout allows for a more balanced, and almost scientific-looking moonphase.

At 42mm wide and 13.83mm high, this sits well on the wrist. Big enough to have presence, yet not so big as to betray its fundamentally dressy origins (it’s a gentlemans chronograph if ever we saw one). The wide, polished bezel only adds to the patrician demeanour. The one thing that may irk is the layout of the chronograph pushers and calendar correctors on the side of the case. These don’t align on either vertical on horizontal axes, but though this might not be an elegant design, it’s the most pragmatic one, based on the movement that powers the annual calendar

Here’s where it gets interesting. One of the main reasons behind Montblanc’s very competitive pricing is the choice of movement. Montblanc calls it the Calibre MB 25.09, which is, in reality, a Sellita Works ebauche with stacked chronograph and annual calender modules, supplied by famous modular movement makers Dubois Depraz (who played an integral role in the development of the famous Calibre 11, by the way). Now, this modular system might not be as refined as an integrated movement (or even an integrated chronograph movement with modular calendar), but it’s nowhere near as expensive. One concern I would raise about these two complications is that all those moving parts must put some strain on the watch’s 42-hour power reserve. However, as with all of Montblanc’s higher-end pieces, the movement is backed by their 500-hour test.

Aside from writing instruments and watches, Montblanc is famous for its leatherwear. As you’d expect then, the black alligator strap made in Montblanc’s Florentine Pellettaria is top-notch, and a perfect choice for the watch.

Montblanc has always played the high-value, high-complication game exceptionally well, and this unusual, desirable combo is no exception. It’s well designed, made and very well priced, thanks largely to the use of the modular movement.

Meet Freckles. Why do we call him that? What does that moonphase remind you of…

If you want a watch that does it all without breaking the bank, this could be the one for you.

What would we change:

We’re sure it would mean a price hike, but it would be cool to see a more interesting base movement used. Perhaps the chronograph developed for the Rieussec?