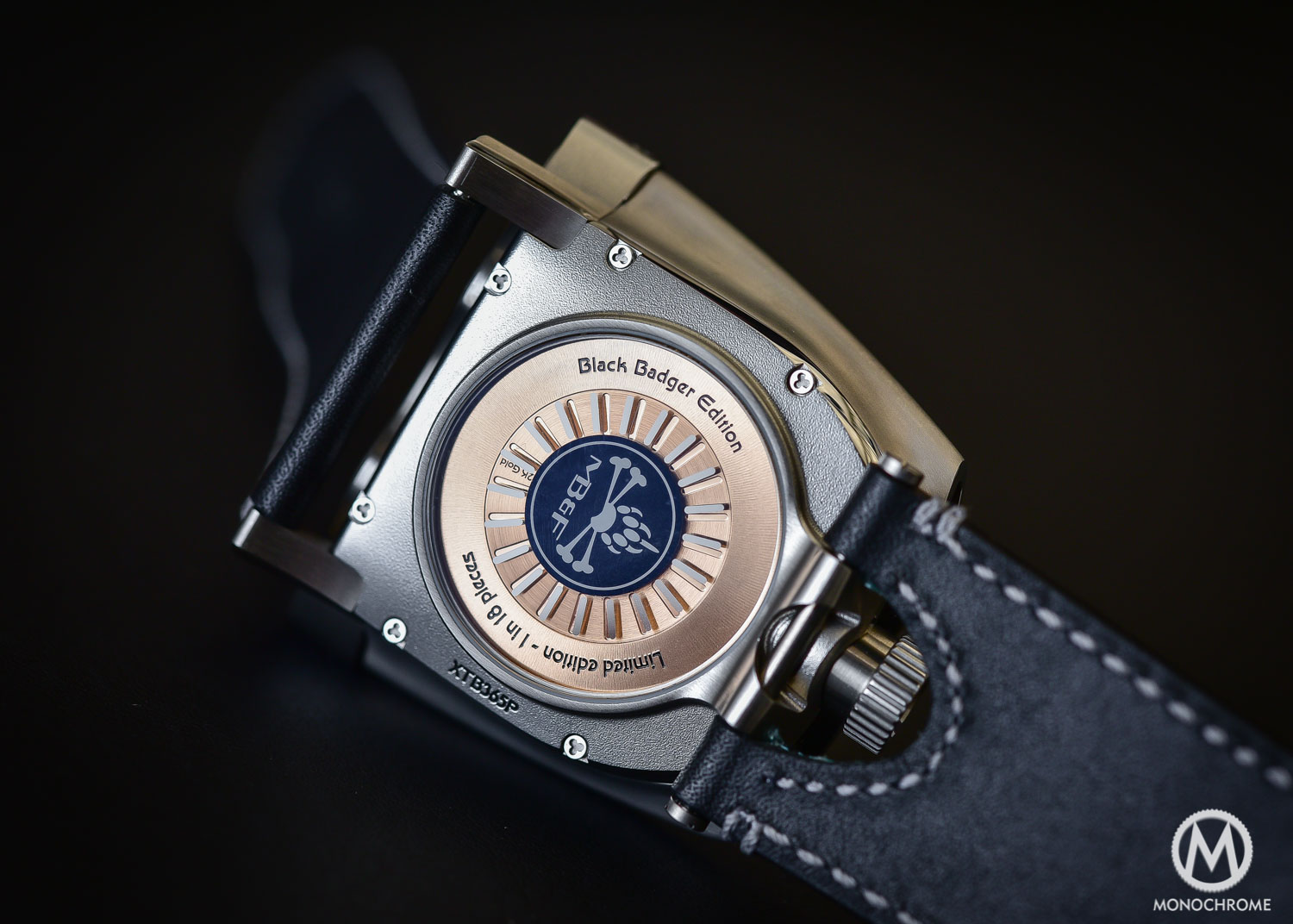 Not so long ago, in fact less than a year ago, MB&F celebrated their 10th anniversary (who can believe that Max and his friends / team are already making crazy watches for 10 years…) and to pay a tribute to those who actually made this story possible (understand here, their faithful clients), they introduced the “baby Horological Machine“, a.k.a the HMX. We thought that the 80 pieces (20 in each colour) of the HMX would have remained the last and only… Until a new friend came on board, one that is not unknown. By teaming up with James Thompson, Max Büsser just gave birth to its latest child, the MB&F HMX Black Badger, the playful and luminous edition of the “baby Horological Machine” (a name given with a lot of affection). 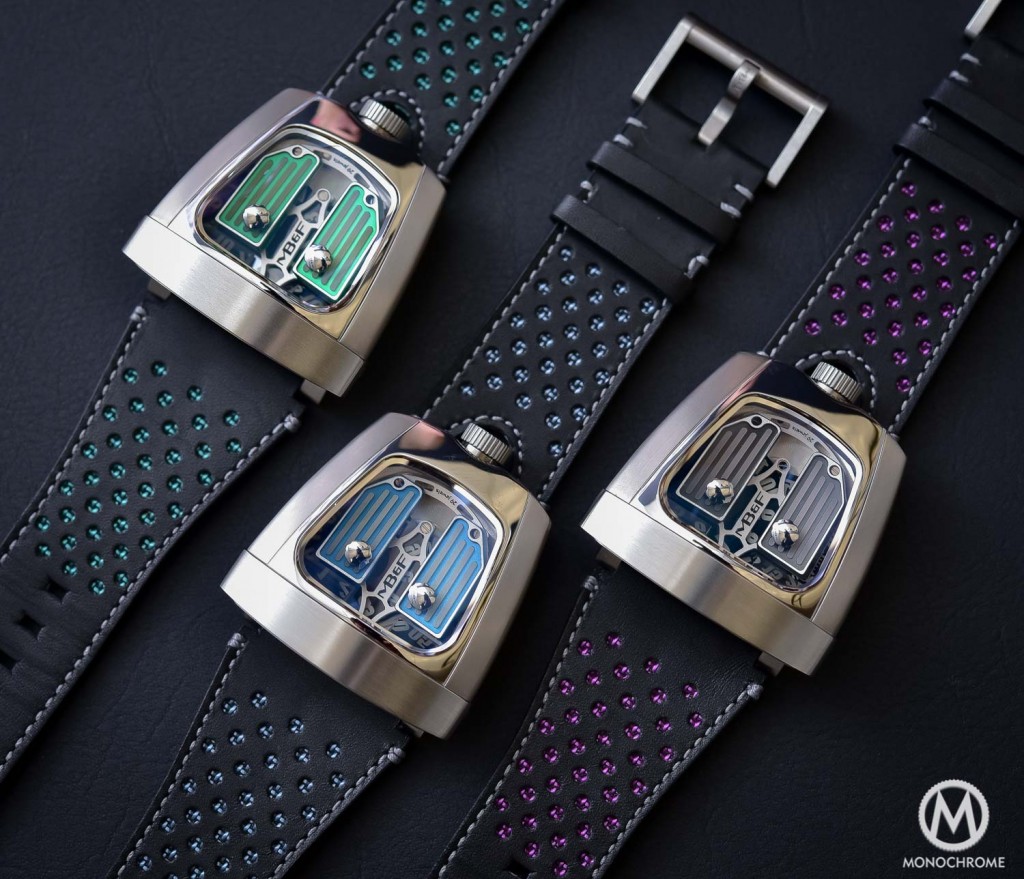 Let’s go back a few months earlier, in June 2015 to be precise. MB&F launched a commemorative piece, the HMX, to celebrate their 10th anniversary. However, and that’s maybe because of the independent, slightly crazy, highly creative minds behind the brand, they did something completely different than what is the norm in the industry. While other brands tend to have the most complicated / impressive / luxurious watches possible for their jubilees, the HMX was the simplest and most affordable (cheaper would be a bit pretentious in this case) watch they ever created – a sort of gift made to 80 faithful collectors, as a reward for helping the brand to become what it is now.

If the MB&F HMX was more simple in terms of display and movement, on the other hand, it was not shy in terms of design. Engines, spaceships and cars have always been a source of inspiration for Max Büsser. The MB&F HM4 was inspired by jet-planes, the HM6 by spacecrafts from Japanese comics and the HM5 by 1970s sports-cars. The HMX is also focused on cars, but instead of looking at only vintage ones like the HM5, it looks at the whole spectrum of supercars. Max says that, like many boys, he filled sketchbooks and notepads with drawings of wild, super-fast cars, dreaming of becoming a designer of supercars. Even the large window on top of the watch leaves a view on what resemble an engine bay, with covers shaped like engine cylinder heads and functional oil filler caps (and just like in a car, they are used to oil the engine when servicing…).

However, this MB&F HMX was announced to be a limited edition of 80 pieces – period. It was until Max met with another guy – one probably as creative and somehow strange as him (again, said with a lot of affection). His name – James Thompson – might not talk to a lot of people here but his “stage name” – Black Badger – is certainly not fully unknown by watch aficionados. In fact, he already collaborated with another great watch designer, Stepan Sarpaneva, to create two different watches, the K0 Northern Lights and the K0 Seasons. Both were using Black Badger’s skills to create a luminous dial. The guy is indeed specialized in objects (such as rings or bracelets) mixing solid luminous resin with carbon fibre or titanium. This is this solid lume that has been used by Sarpaneva to create dials and that we now find in the HMX Black Badger – in fact it is no surprise to see James now workin with other brands, as independent watchmaking is like a small village… All know each others and end up working together… Indeed, Stepan Sarpaneva worked with MB&F on the MoonMachine.

The work of James can been seen on the “rocker covers” on top of the engine of the HMX Black Badger. Instead of using paints inspired by sports cars (Lotus Black, British Racing Green, Ferrari Red and Bugatti Blue), these are now machined in solid blocks of lume, still with the same design, reminiscent of cylinder head covers from a supercar engine, but now available in 3 different colours: purple reign, radar green and phantom blue. Already cool and colorful in day light, it becomes super-duper playful in the night, once the solid lume charged with light. The top of the MB&F  sport  watch glows and gives a intriguing view on the innards of the HMX Black Badger.

The MB&F HMX Black Badger is a limited edition of 3 x 18 pieces (for each colour) and it will be priced at 48,000 Swiss Francs (before taxes). More details on the dedicated page here – also note that the MB&F x Black Badger collaboration gave birth to a desk clock, the Starfleet Machine Black Badger (also featuring parts in solid lume).