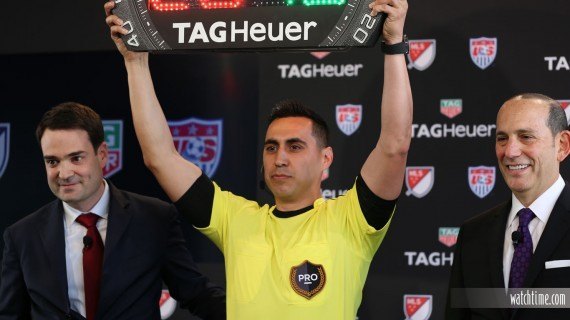 TAG Heuer has announced a landmark, long-term partnership agreement with Major League Soccer (MLS) and the U.S. Soccer Federation. The partnership, which commences on March 6, the first day of the 2016 MLS season, also includes the Professional Referee Organization (PRO), the organization responsible for managing the referee and assistant referee program in professional soccer leagues in the United States and Canada. As part of the agreement, PRO referees will wear the recently launched TAG Heuer Connected Watch during matches, and will also brandish the TAG Heuer logo on their uniforms. TAG Heuer branding will also be visible on the substitution board used on the sideline during matches. 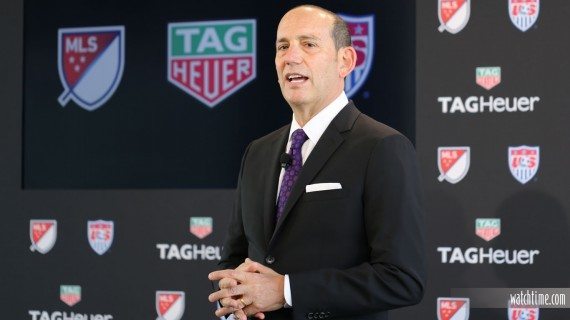 The Swiss watch brand, which has long been associated with sports timekeeping and recently entered into a partnership with NFL star Tom Brady, will act as the Official Watch and Official Timekeeper of MLS and PRO and as the Official Timekeeper of U.S. Soccer. Through the partnership, and by leveraging MLS’s and U.S. Soccer’s passionate and growing fan bases, TAG Heuer strives to further elevate its global status as both a luxury watch brand and professional sports timer. TAG Heuer and the U.S. Soccer organizations made the announcement at a press conference in New York City on February 22, hosted by Muller and Garber and featuring a special appearance by Alex Morgan, Olympic Gold medal winner and forward for the FIFA Women’s World Cup winning U.S. women’s team.

“Soccer is the fastest growing sport in the United States; and it is also most popular amongst the youth demographic, a generation we aim to connect with,” said Kilian Muller, president of TAG Heuer North America. “TAG Heuer is proud to already have a fruitful partnership with Bundesliga, the Professional Association Football League of Germany, and we are very proud to be a part of such an exciting new partnership within the United States and Canada. I am certain that together we will make Major League Soccer and U.S. Soccer louder, stronger, and faster.”

MLS Commissioner Don Garber added, “We are excited to welcome TAG Heuer to the North American soccer family. This is a premium, world-class brand that has already aligned with other top leagues around the world. We think this partnership can be a catalyst for innovating how timekeeping works in global football. We look forward to working with them for many years to come.”

“TAG Heuer has a long-standing connection to sports and an impressive history of creating precision watches used by high-level athletes across the globe,” said U.S. Soccer President Sunil Gulati. “We’re looking forward to the opportunity to work closely with one of the most innovative luxury brands in the world.”

“PRO and its officials are delighted to be associated with a brand of integrity and accuracy,” said Peter Walton, General Manager, Professional Referee Organization. 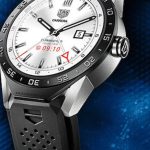