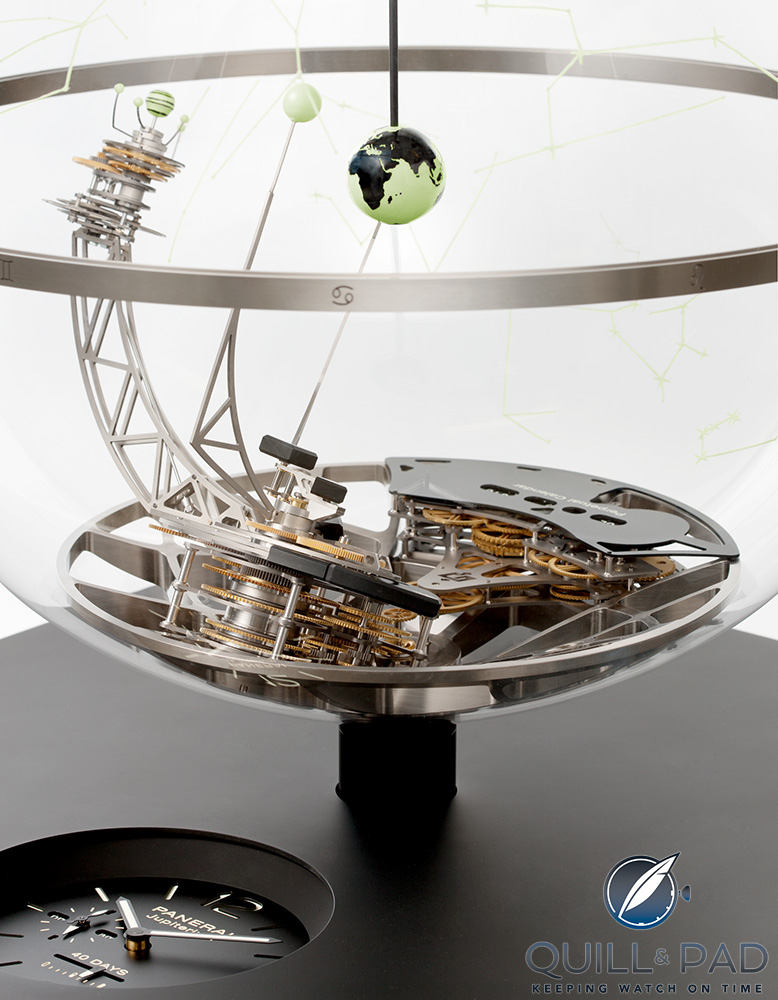 In Florence, Italy, on a street parallel to the busy arcades greeting millions of visitors to the Uffizi Galleries, is a museum dedicated entirely to Galileo Galilei.

And little more than a stone’s throw from the museum, set on one of the most prominent piazzas of the city, is the original Officine Panerai workshop. It faces another Italian icon, Brunelleschi’s iconic Duomo – whose clock was renovated in 2014 with the aid of the city’s internationally renowned watch brand.

Given Panerai’s origins in this Renaissance city, it should come as no surprise that the Italian watchmaker created a horological tribute to the insatiably curious father of modern science, Galileo Galilei, who was once a resident of Florence.

Called the Jupiterium, this three-dimensional planetarium clock can be found in the rather quiet Museo Galileo. 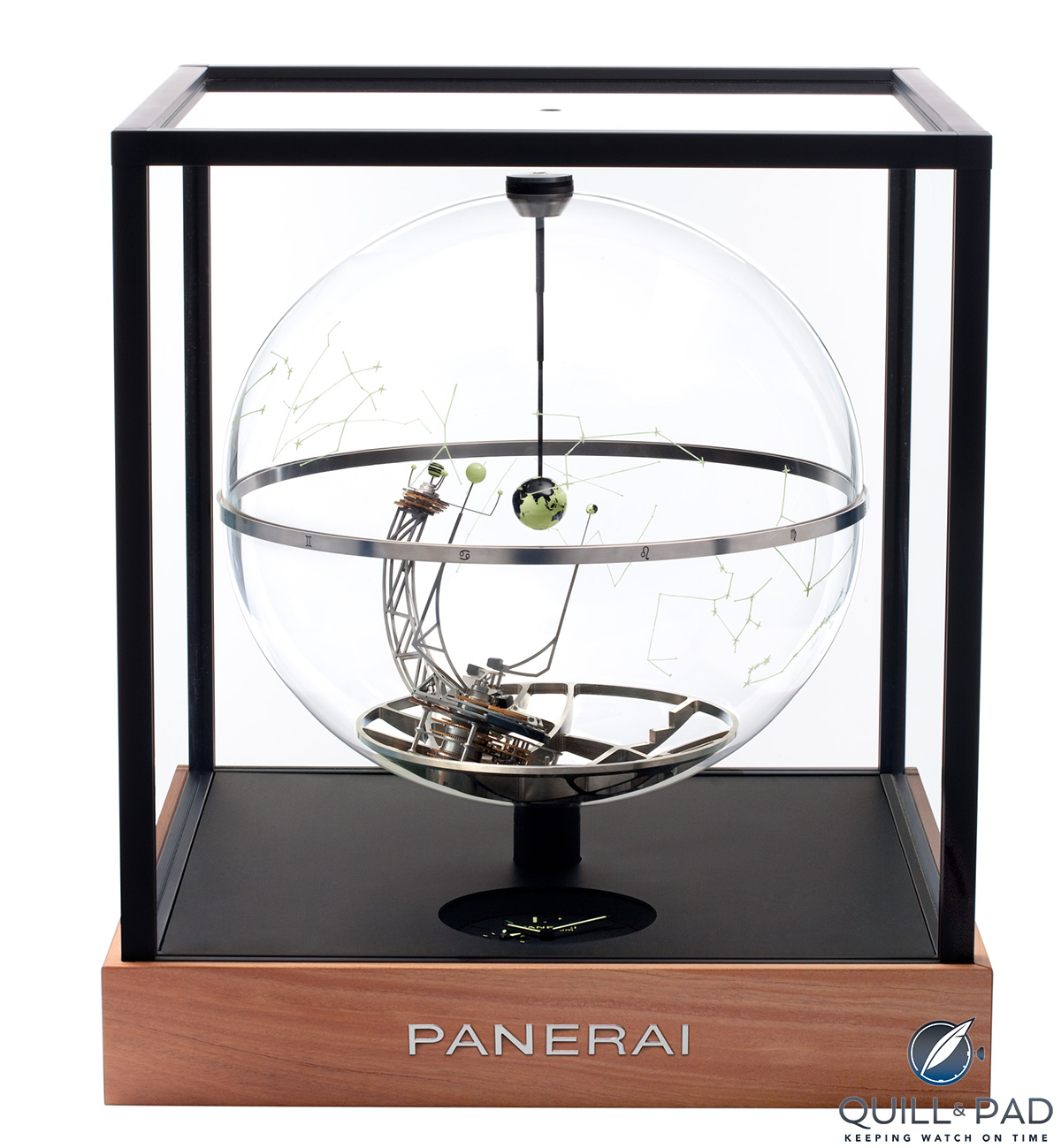 But to fully comprehend the profundity of this interesting planetarium clock a brief lesson in scientific history is required. 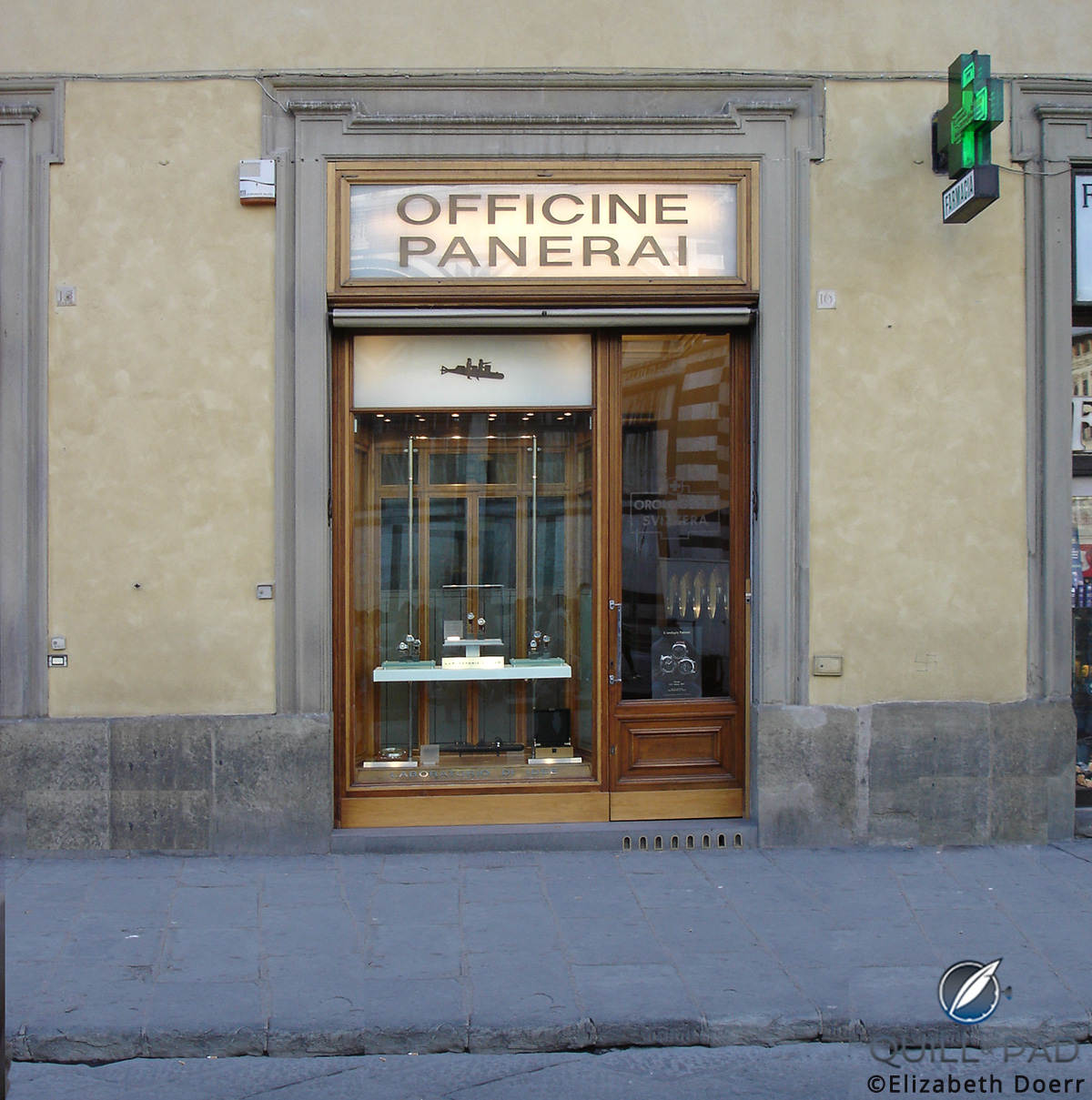 Galileo Galilei wore many hats: he was an engineer, physicist, astronomer, mathematician, and philosopher. He was so highly regarded that he even tutored the children of Florentine Duke and Duchess Eleanor and Cosimo Medici in science.

He also devised what is now known as the scientific method, whereby one tests a hypothesis through experimentation.

And although Galileo cannot claim the invention of the telescope, he did help improve its design and was one of the first to use it to study the stars.

And this is where his most famous story begins.

In Galileo’s time – the late sixteenth and early seventeenth centuries – the planetary theory regarding planet earth was geocentric, meaning that everyone (thanks to the Catholic Church) believed that the earth was at the center of the solar system and that the sun and all the planets orbited the earth.

But the discovery that Galileo made through the lens of his refracting telescope in 1610 was that the earth was not unique in its powers of gravitational attraction; he saw four moons orbiting Jupiter. So, if everything was supposed to orbit the earth as the center of the solar system, how could this be?

Galileo was on to something.

Just 75 years earlier, Nicolaus Copernicus proposed the idea of heliocentrism, which put the sun – not the earth – at the center of the solar system.

But spreading this theory as fact would go against the teachings of the Bible as well as Catholicism. And this was the Italian scientist’s enormous dilemma.

What the Jupiterium displays is earth’s geocentrism, then validated by the Bible, forcefully proffered by the church, and widely accepted by society, juxtaposed with the four orbiting moons around a magnificent Jupiter discovered by Galileo.

Panerai’s Jupiterium: an augur of change

The Jupiterium in essence captures the foreshadowing moment of an enormous change in societal thinking.

Weighing 110 kilograms (242 lbs), this horological homage to a time past features a large transparent dome etched with 12 Super-LumiNova-filled zodiac constellations. It also houses several luminescent celestial sights: the sun, the earth, its moon, and Jupiter with four of its moons. 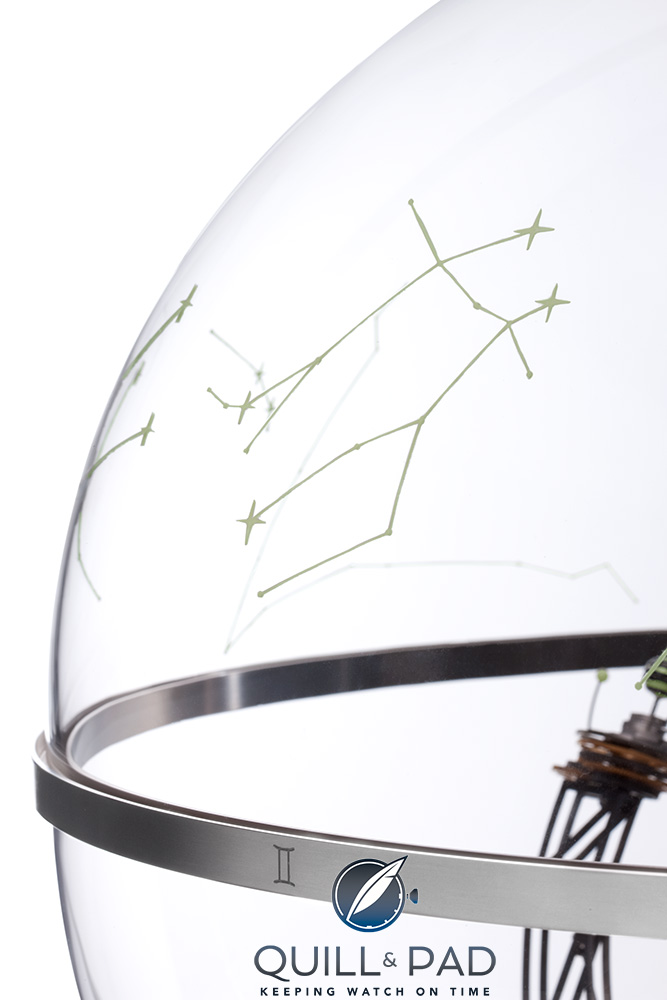 The elements within the sphere orbit according to how a Renaissance man would have imagined it, with earth at the center of it all.

All of the above-mentioned planetary bodies – apart from the earth – orbit according to real time, with the sun and the earth’s orbits inverted: the stars return to their original positions every 23 hours and 56 minutes; in 27.32 days the moon makes a full rotation around earth; the sun revolves around earth in 365.26 days.

Panerai Jupiterium planetarium with terrestrial perpetual calendar in the base

The Panerai Jupiterium also features a manual-winding clock set into the mahogany base with a 40-day power reserve and featuring a perpetual calendar with day, month, and year. Typical of Panerai, the clock also has a black dial with luminescent hands and time indicators. The Jupiterium as a whole is just as visually interesting in the dark.

The fact that this tribute piece places the earth at the center of everything helps one to appreciate the enormity of the challenge faced by Galileo, who well understood what upending geocentrism meant to the powerful Catholic Church.

And, as Shakespeare said, “Therein lies the rub” as Galileo found himself in hot water anyway.

In 1633, the Catholic Church began an inquisition into the scientist’s findings. Its stance was that Galileo’s belief that the sun rather than the earth as the center of the solar system was in direct violation of the Bible’s teachings.

And the church, already under attack from the Protestant Reformation among other things, was not prepared to accept this “scientific nonsense.”

Galileo argued that rather than concretely holding heliocentrism as a belief, he thought that his findings should bring about public discussion and debate.

The church would not budge.

After being forced to swear to the “abjured, cursed” nature of his work, Galileo had to promise he would never teach again and was forced to live out the final eight years of his life under house arrest (except for the occasional visits to his children).

His published works were from then on considered forbidden, not to be taken off the church’s Index of Prohibited Books until 1835, 202 years after his trial.

And it wouldn’t be until 1992 that a committee under Pope John Paul II would clear the great scientist’s name of heresy; a closing chapter of Galileo’s legacy.

The Jupiterium is a marvelous feat that encompasses this fascinating story of Galileo’s undying thirst for science mixed with Panerai’s horological prowess.

As Galileo proved, the quest for knowledge begins with curiosity. And the only way to expand that knowledge is by sharing it, something museums happen to excel at.