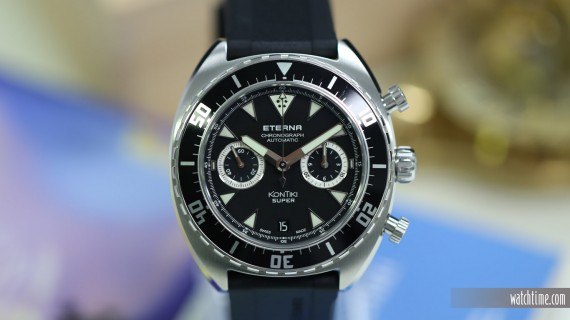 For those watch enthusiasts who know Eterna primarily as the brand that gave us ETA — that movement-making colossus that has supplied engines to thousands of watch models over the decades — this year brings a reminder that the Eterna watch brand (not at all associated with ETA parent Swatch Group) remains a going concern. In 2016, the brand celebrates 160 years of watchmaking, albeit with a dizzying number of ownership changes over the years and long swaths of time when U.S. distribution was practically nonexistent. Eterna’s current owner, Citychamp Watch and Jewellery Group, LTD, which also owns Corum — is determined to make the anniversary a special one, with a number of new releases, including a limited-edition skeleton watch. Among Eterna’s other new launches this year is a chronograph version of the Super KonTiki, a modern, contemporarily sized version of the divers’ watch that the brand put on the horological map back in 1947. 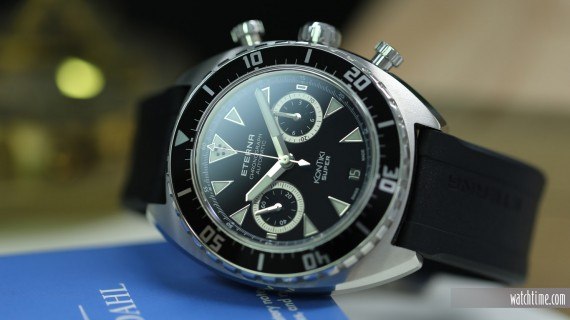 If you are familiar with Eterna as a watch brand, it is likely because of the original KonTiki, which, some maintain, has earned a place in the pantheon of iconic dive watches alongside the Rolex Submariner, Blancpain Fifty Fathoms, Omega Ploprof, and other deep-sea trailblazers. It is named for the wooden raft that Norwegian explorer Thor Heyerdahl sailed across the ocean on his legendary 1947 expedition from South America to Polynesia — a journey on which Heyerdahl and his crew all wore Eterna wristwatches. (The raft, in turn, was named after an Inca sun god.) The watches’ durability, water-resistance, and timekeeping performance on the 8,000-mile nautical trek inspired Eterna’s watchmakers to create the classical forebear of this timepiece, a model that has been a mainstay of Eterna’s collection, in various incarnations, ever since. And while I did nothing more adventurous with the Super KonTiki Chronograph Manufacture than wear it during a rainstorm, I had a fine opportunity to get up close and personal with it during my two-week loan period.

Aficionados of classic dive watches will instantly recognize The Super KonTiki Chronograph’s overall look, with a dial dominated by large, triangular hour indices, the top one at 12 o’clock decorated by the brand’s logo of five “balls” arranged in a pentagon. (For those who are curious, this logo design is a visual reference to the five ball bearings of Eterna’s groundbreaking “Eterna-matic” self-winding watch movement, elements whose strategic placement in the mechanism significantly reduced friction and resistance on the winding rotor, thus reducing wear and tear on internal parts and increasing the accuracy — a technical milestone for which the company has been justly lauded by horophiles.) The emblem also appears, subtly, as an engraving on the screw-down crown. 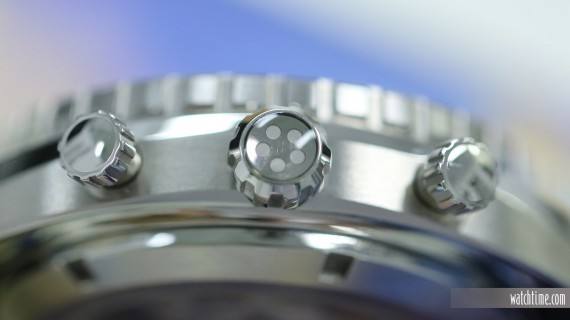 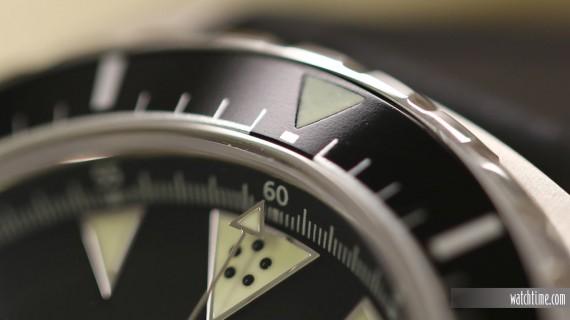 The 45-mm-diameter stainless steel case (which designates the watch as “Super,” differentiating it from the regular KonTiki models, at 42 mm) boasts a high level of finishing: brushed on the upper surface of the case, which flows into the sloping lugs, followed by a middle layer of polished finish, then more brushed finishing on the main body of the curving caseband, then more polishing on the lower surface. Add the obligatory notched, rotating diver’s bezel on top, and the brushed-finish, screwed caseback with flat sapphire window, and the Super KonTiki clocks in at a relatively hefty 16 mm thick. Strapping the watch onto the wrist, however, most will find that neither the diameter nor the thickness feel particularly unwieldy. The wrist-hugging ergonomic curve of the case helps here, as does the fact that both crystals (front and back) are flat rather than domed.

A closer look at the bezel reveals its attractive, shiny insert with 60-minute diving scale, made of aluminum. The rather large, eminently legible Arabic numerals at the 10-minute marks make an appealing contrast to the lack of any numerals on the dial. The bezel rotates in one direction (if you need to ask why, you’re probably not that into divers’ watches and you’ll probably want to avoid actually diving with one) and makes an audible clicking sound as it moves in one-minute increments to set dive time — or, in fact, any other interval you’d want to time.

As far as nighttime legibility (or, for that matter, the underwater depth legibility that the watch’s designers almost certainly had in mind), that’s also one for the win column: a generous amount of Super-LumiNova is applied to the hands, hour indices, and the 12 o’clock triangle on the bezel. The period in which I wore this watch happened to be a stretch of scorching heat and bright sunshine in New York City, so these dial elements soaked up plenty of light to illuminate the wee hours. 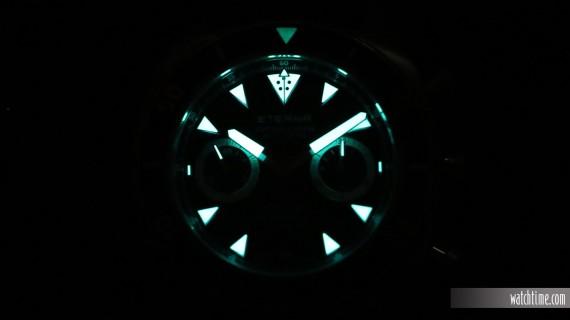 Of course, why bother using the divers’ bezel to time events when you have a top-notch flyback chronograph built into this watch as well? A light push of the plunger-style pusher at 2 o’clock starts and stops the central, arrow-tipped counter hand, while the subdial at 3 o’clock tallies elapsed hours/minutes. Another push on the pusher at 4 o’clock returns both hands to zero (12 o’clock.) Conversely, if you’re timing simultaneous events, the flyback function allows the wearer to use the top pusher to start timing, press the second pusher to return the hand to zero and instantly start timing another interval, and so on and so forth until you stop the hand with the top pusher and return it to zero with the bottom pusher.

The movement powering all these functions — and earning the model its “Manufacture” suffix — is Eterna’s Caliber 3916A, one of dozens of variations on the brand’s modular base movement, Caliber 39, with automatic winding and a long power reserve of 65 hours from a single mainspring barrel. (Eterna says that fully 70 percent of the movement parts are manufactured at its headquarters in the Swiss town of Grenchen.) The somewhat axe-like rotor is microblasted and enhanced with circular côtes de Genève; Eterna’s ball-bearings emblem is once again in evidence, engraved in the center of the rotor itself as well as around its pivot point in the center. The circular Geneva wave motif continues on the rhodium plated bridges and plate under the rotor, and tilting the watch in a certain way so that the rotor is off to the side reveals an attractive arrangement of brightly blued screws that almost reminded me of a constellation. Also of note: the use of a column wheel (pictured, third photo down) to control the chronograph functions indicates that Eterna is catering to chronograph purists as well as serious dive watch enthusiasts with this piece. 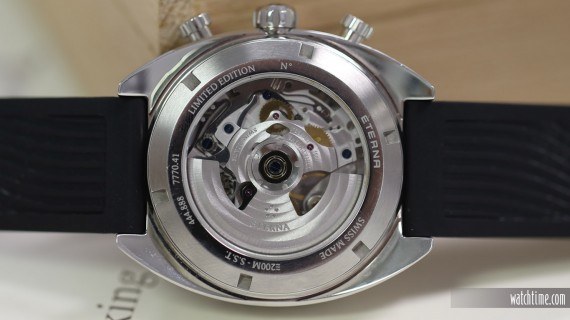 I was never quite able to confirm the 65-hour power reserve, as the watch stopped unexpectedly a few times while I was wearing it. I can only chalk this up to a quirk that tends to plagues some watches with screw-down multiple-position crowns: because the winding system itself is so quiet, I was at times not sure if I was actually winding the mainspring or simply turning the uncoupled crown in between setting positions. It could be that it wasn’t getting enough winding to actually build up enough power for the long haul. I eventually took to giving the watch a few good shakes of the wrist (it is an automatic, after all) after each winding of the crown as a backup power source.

The rubber strap is straightforward on the top side – matte on the outer edges with an inset middle stripe with a subtly gritty texture. On the other side is a wavy pattern that I can only assume is inspired by this model’s history in the underwater depths. The watch is quite comfortable on the wrist, though the very sporty look of the strap might strike some as a bit incongruous with a suit or dress shirt. The pin buckle is also tool-watch simple, with just the ball-bearings logo engraved on the buckle. The alternating brushed and polished finishes of the case are also echoed here on a smaller, more subtle scale. 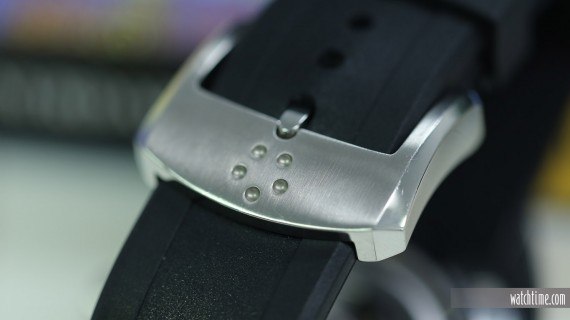 Overall, the Eterna Super KonTiki Chronograph makes a fine wrist companion, albeit one more suited to business casual than black tie, and one certain to identify you as an in-the-know connoisseur of important dive watches. And the chance to acquire a timepiece with an in-house flyback chronograph movement, in addition to its historical pedigree, for a relatively reasonable $4,700 ($4,900 for the version with a steel Milanese bracelet), might strike some as one too good to pass up.