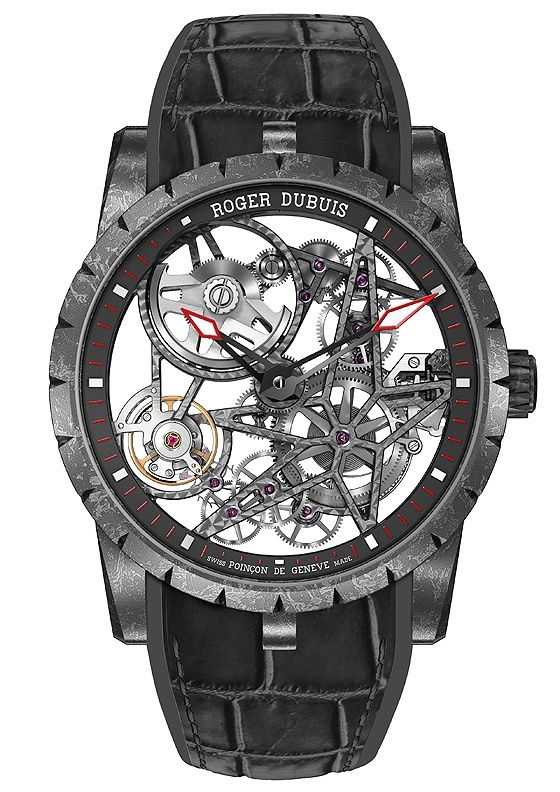 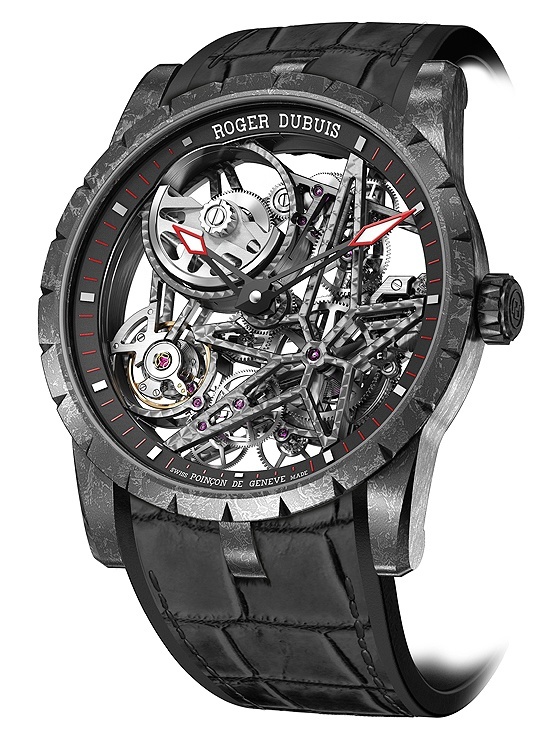 Roger Dubuis kicked off its “Year of the Diva” at SIHH 2016, with new product releases almost solely restricted to its Velvet collection of haute horlogerie ladies’ watches. However, the brand’s many male fans still found a few new timepiece made with them in mind, notably the Roger Dubuis Excalibur Automatic Skeleton Carbon.

The new watch continues the skeleton theme that dominated last year’s SIHH output from Roger Dubuis (more on which here). It is a new version of the Excalibur Automatic Skeleton, the brand’s first non-tourbillon skeleton timepiece, powered by its first-ever skeletonized movement with automatic winding. But whereas the original model was housed in an 18k rose gold case, the new one features a case made of a high-tech composite called carbon fiber sheet moulding compound (SMC).

Carbon fiber SMC is a lightweight material, prized in the aerospace industry for its ability to deliver high productivity and cost efficiency, and enabling the creation of reproducible parts with highly complex shapes, in the construction of fuel-efficient aircraft. It is produced by compressing carbon fibers with resin and steel, moulding at extremely high temperatures, and finally reworking and compounding the mixture with resin.

While the case’s high-tech material gives it a distinctive, rugged look, it retains the familiar Excalibur look — round, with a fluted bezel and crown, triple lugs, along with the Dauphine hands that sweep over the openworked dial.

Like all of the Geneva-based brand’s skeleton calibers, the watch’s movement, Caliber RD820SQ, is designed from scratch (as opposed to being an existing movement that has been skeletonized after the fact) and incorporates the “star” motif that was so prominent in Roger Dubuis’s most recent skeleton watches. The tips of the five-pointed star also serve as hour pointers. The movement’s automatic winding system is driven by a micro-rotor (first introduced in a Roger Dubuis movement in 2005), which delivers winding power equivalent to that of a larger central winding rotor despite its reduced weight and openworked structure, according to the brand. Caliber RD820SQ is composed of 167 meticulously hand-finished components and, like all watches from Roger Dubuis, has been awarded the prestigious Geneva quality hallmark, the Poinçon de Genève. 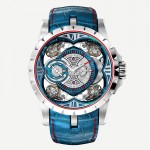 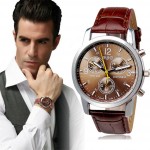