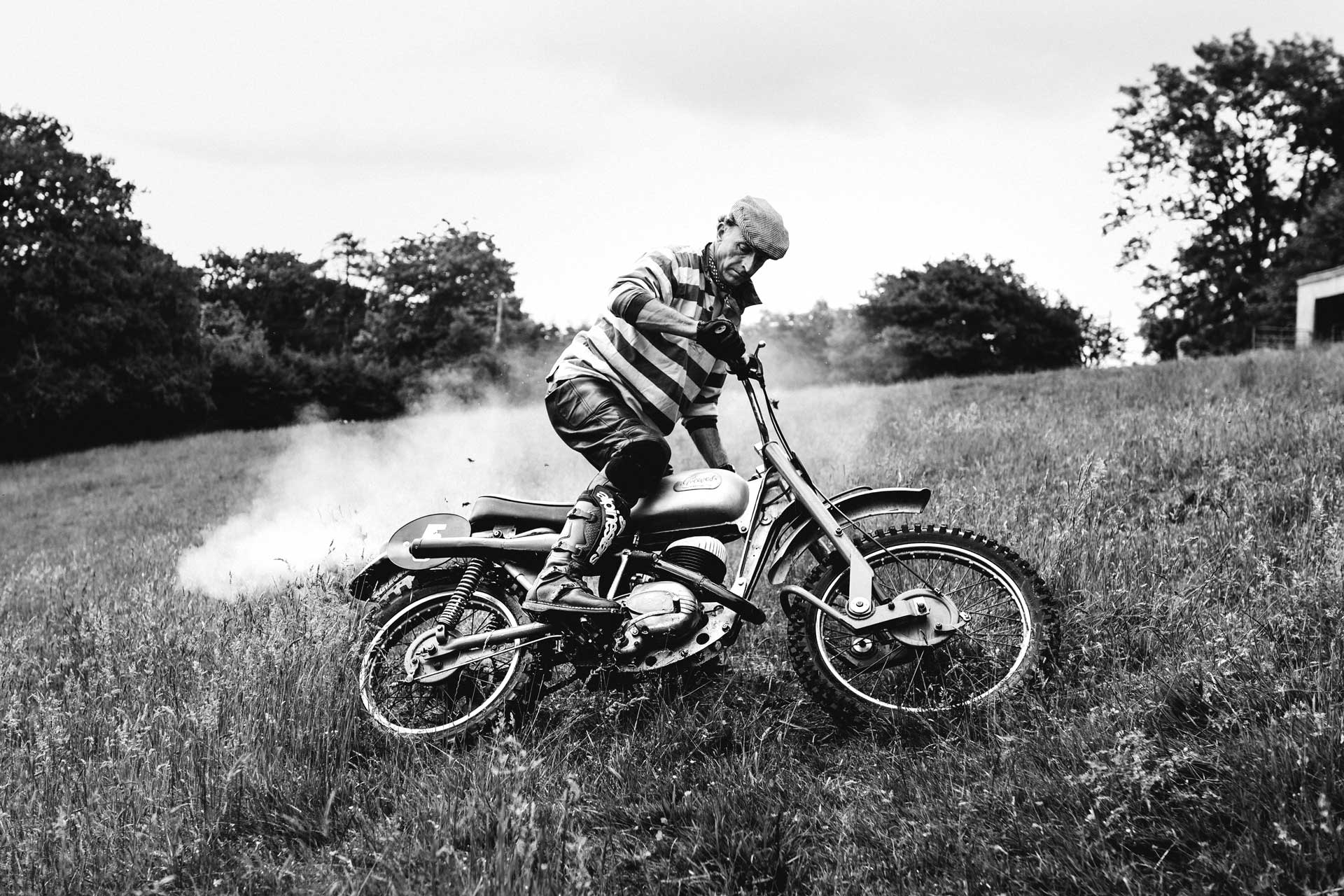 Ask any English motorcycling enthusiast above the age of 30 (well, maybe 40) what springs to mind on hearing the word “scrambling” and the chances are they’ll picture a group of mud-spattered men wearing goggles, rugby shirts and cork-lined crash helmets – jumping, sliding and wheelie-ing a motley selection of bikes around a dirt track littered with hills, bumps and ruts. Nowadays, this branch of motorcycle sport is universally known as motocross and is competed in by athletes who are as highly tuned as the fire-breathing machines that they ride (or sometimes fly) in what is now an “extreme sport” of the type beloved of the Red Bull generation.

Scrambling, however, was the very English, 1960s forerunner of motocross as we know it today. Back then, it was distinctly amateurish and even the top riders gave little thought to honing their bodies in order to make life easier for themselves when called upon to lap the unforgiving tracks on motorcycles that, nowadays, seem hopelessly inadequate for the task.

Proper scrambling men, you see, existed on a diet of sweet tea and meat pies, worked hard during the week in manual jobs, fixed and fettled their own bikes and lived for the weekend when they could rip it up on tracks around the country. They created an electric atmosphere based on a heady mix of Castrol oil fumes, droning exhausts and flying soil that, at scrambling’s peak, attracted crowds of up to 70,000 – plus regular air time on national television.

But, despite being largely the domain of amateur riders, scrambling proved to be big business for the motorcycle manufacturers. As with road racing, a good showing on the scrambles track could quickly translate into sales both at home and abroad – as ably demonstrated by Greeves, which was one of the most successful British dirt bike builders of the 1950s and 1960s. 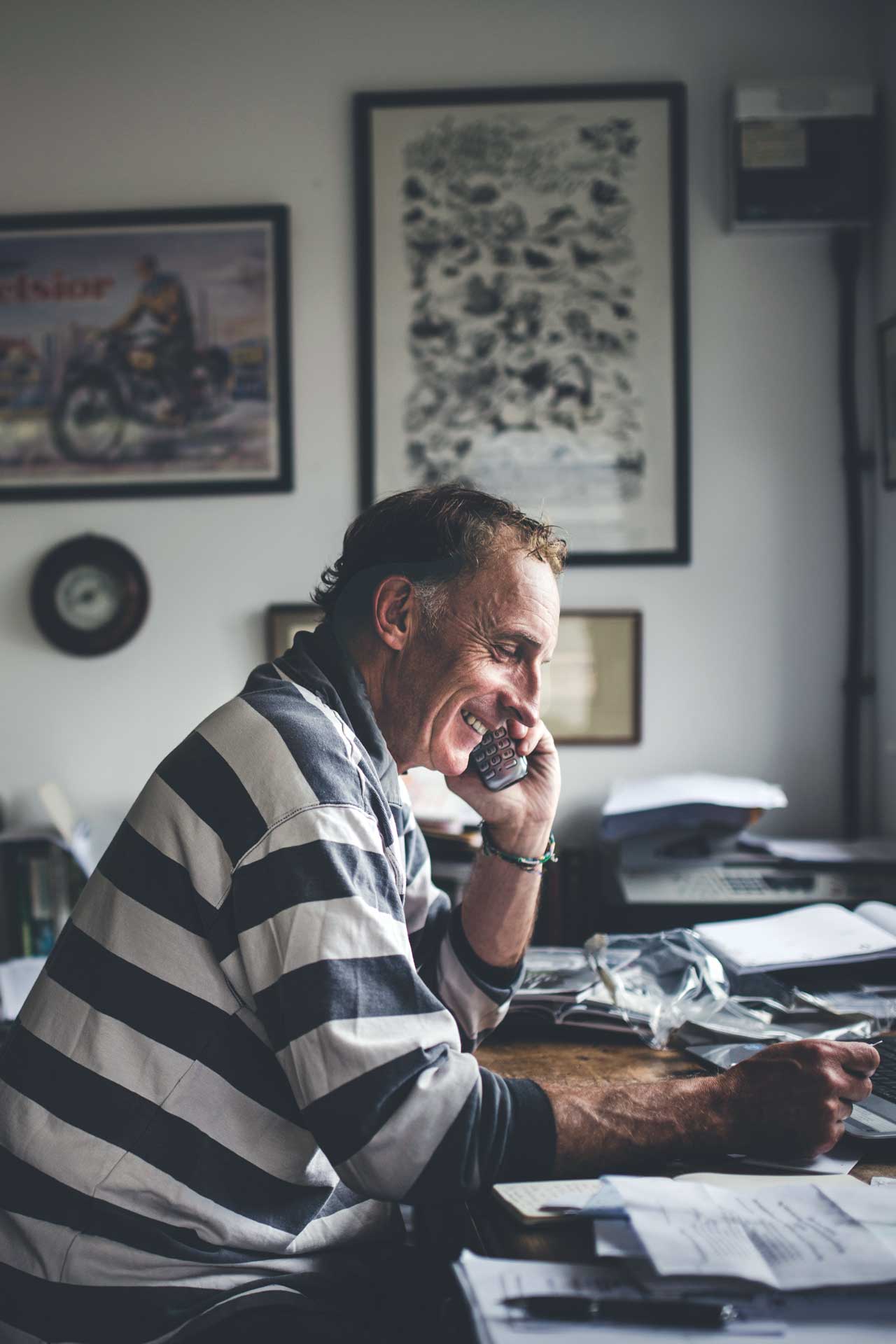 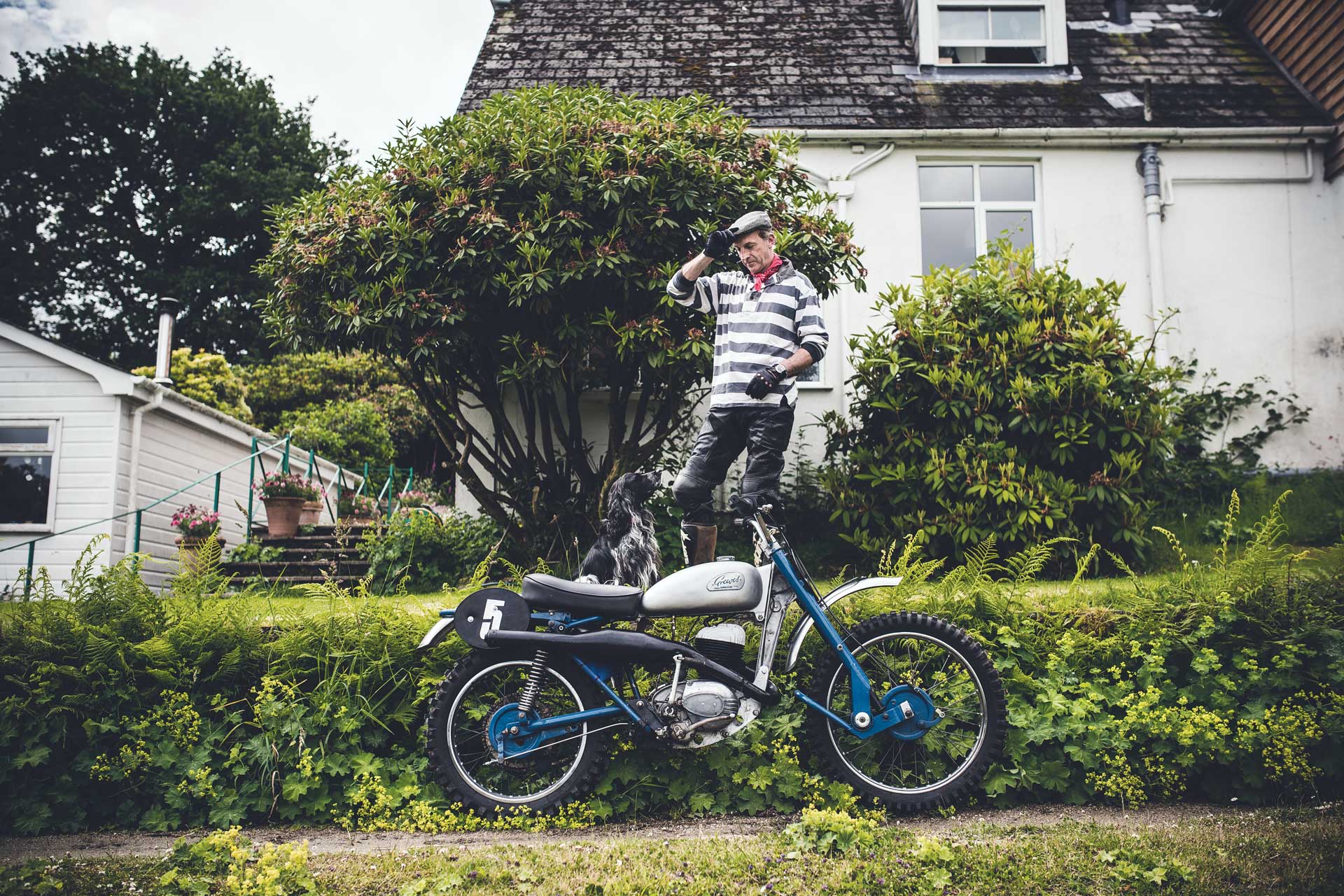 Like many such firms, it was decidedly quirky, having been founded in 1952 by Worcestershire engineer Bert Greeves as a maker of what were then known as “invalid carriages” for the disabled. Greeves had the idea for the company after fitting an old lawnmower engine to his semi-paralysed cousin Derry Preston-Cobb’s wheelchair, thus inventing the Invacar, which soon won Greeves a lucrative contract to mass produce the vehicles for the government’s Ministry of Pensions. To add to the eccentricity of it all, Preston-Cobb worked as the firm’s head of sales, travelling the country in a custom-built Invacar with a highly tuned engine that enabled him to startle the drivers of overtly more sporty vehicles as he overtook them at implausibly high speeds.

Already a keen off-road trials rider and motorcycle collector, Greeves was encouraged by Preston-Cobb to branch out into bike production, which commenced in 1953 with two-stroke engined machines bristling with unusual design features, such as a cast alloy beam frame and distinctive “leading link” front suspension.

Within three years, the scrambler version of the bike was enjoying considerable success, prompting Greeves to sign the talented Brian Stonebridge as a “works” rider competing in the European Motocross Championship – and his victory in a 1957 race at the legendary Hawkstone Park circuit in Shropshire resulted in the “Hawkstone” model pictured here, which was so successful that it led the firm to specialise in scrambles machines, thousands of which were exported abroad.

It was on a Hawkstone that the late, great Dave Bickers further boosted sales for Greeves by winning two consecutive 250cc European championships – which, effectively, meant “world championships” since scrambling/motocross had yet to spread outside of Europe. And, having spent an afternoon trying to make “our” Hawkstone dance for photographer Amy Shore’s camera in half the way that Bickers would have done so easily, I can only admire him all the more. 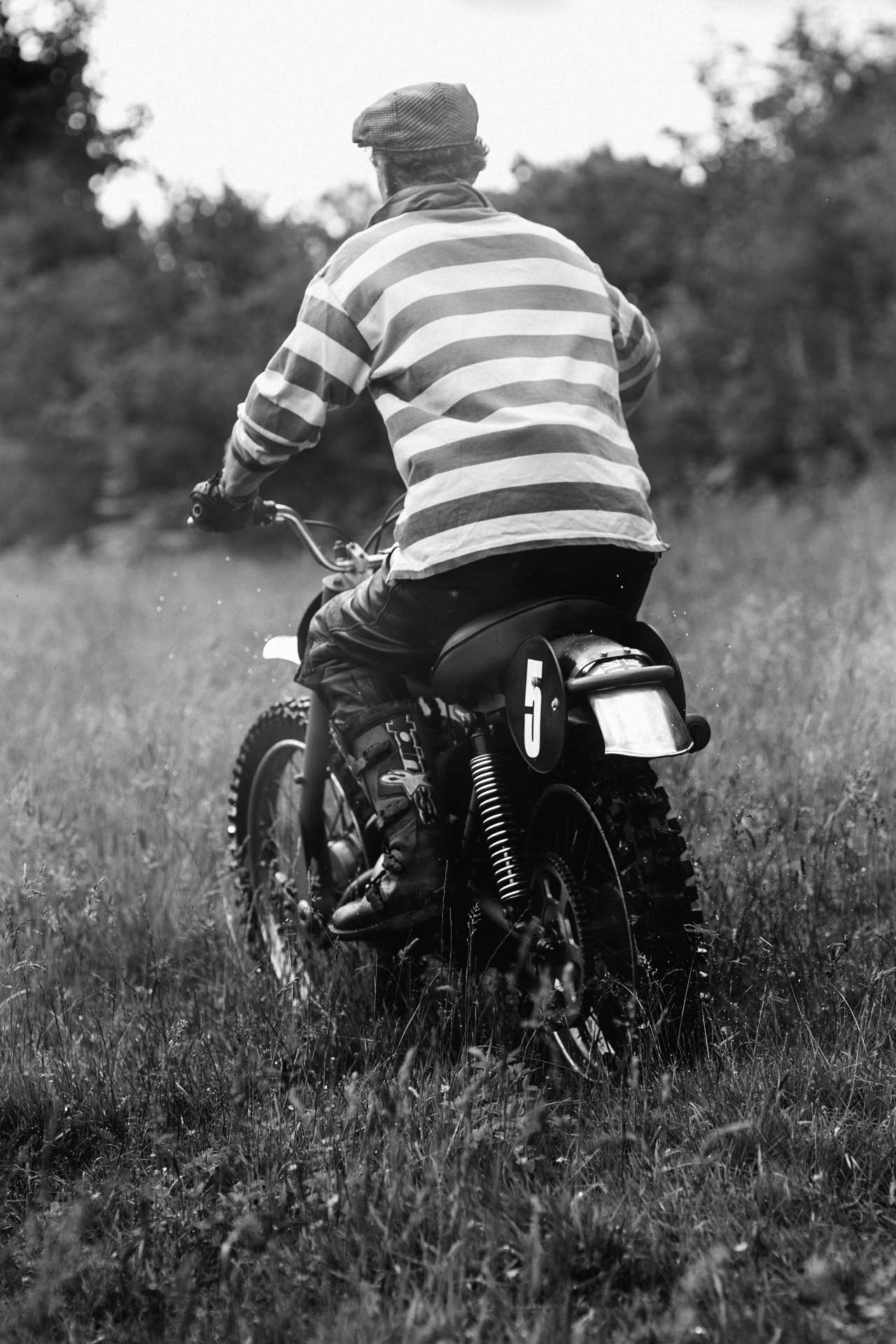 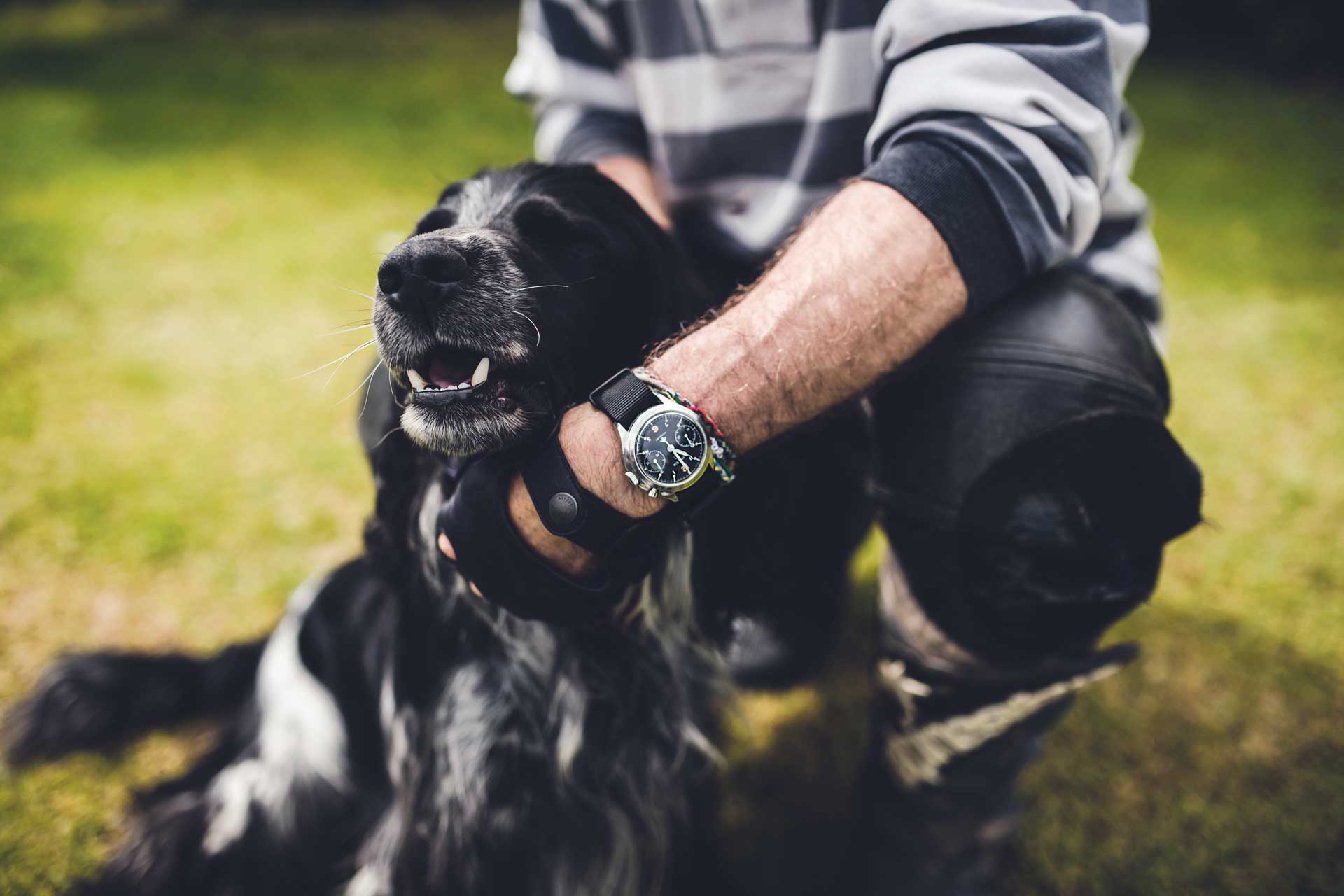 The Hawkstone model was produced from 1958 until the early 1960s and, with its small size and perky two-stroke engine, it soon showed dirt bike riders in both Europe and the US that, when it came to off-roading, light weight and nimbleness were key. And what might a reasonably well-heeled Hawkstone rider have worn on his wrist to keep a track of when he was due on the start line for his next race, to monitor the lap times of his rivals, or just to see how much further he had to drive in his noisy, underpowered van before he could finally get home and rest his scramble-battered body for a few hours before having to get up for work at dawn on Monday morning?

It’s unlikely he would have been able to stretch to a Rolex. But, as a Greeves fan, he would want something interesting and well built from a name that would be recognised by those who knew. Which is why we chose to pair the Hawkstone – generously loaned by Mike Eveleigh, a near neighbour who happens to be a genius engineer and mad keen vintage scrambles rider – with the beautifully preserved, single-button Lemania chronograph seen in the shots featured here.

Apart from belonging to just the right era, what made the Lemania seem such a suitable pairing with the Hawkstone was both its similar condition and its wonderful 2220, third series movement – which, unlike its predecessors, benefited from Incabloc shock settings that make it ideal for surviving the rough and tumble of an extended session on a scrambler. 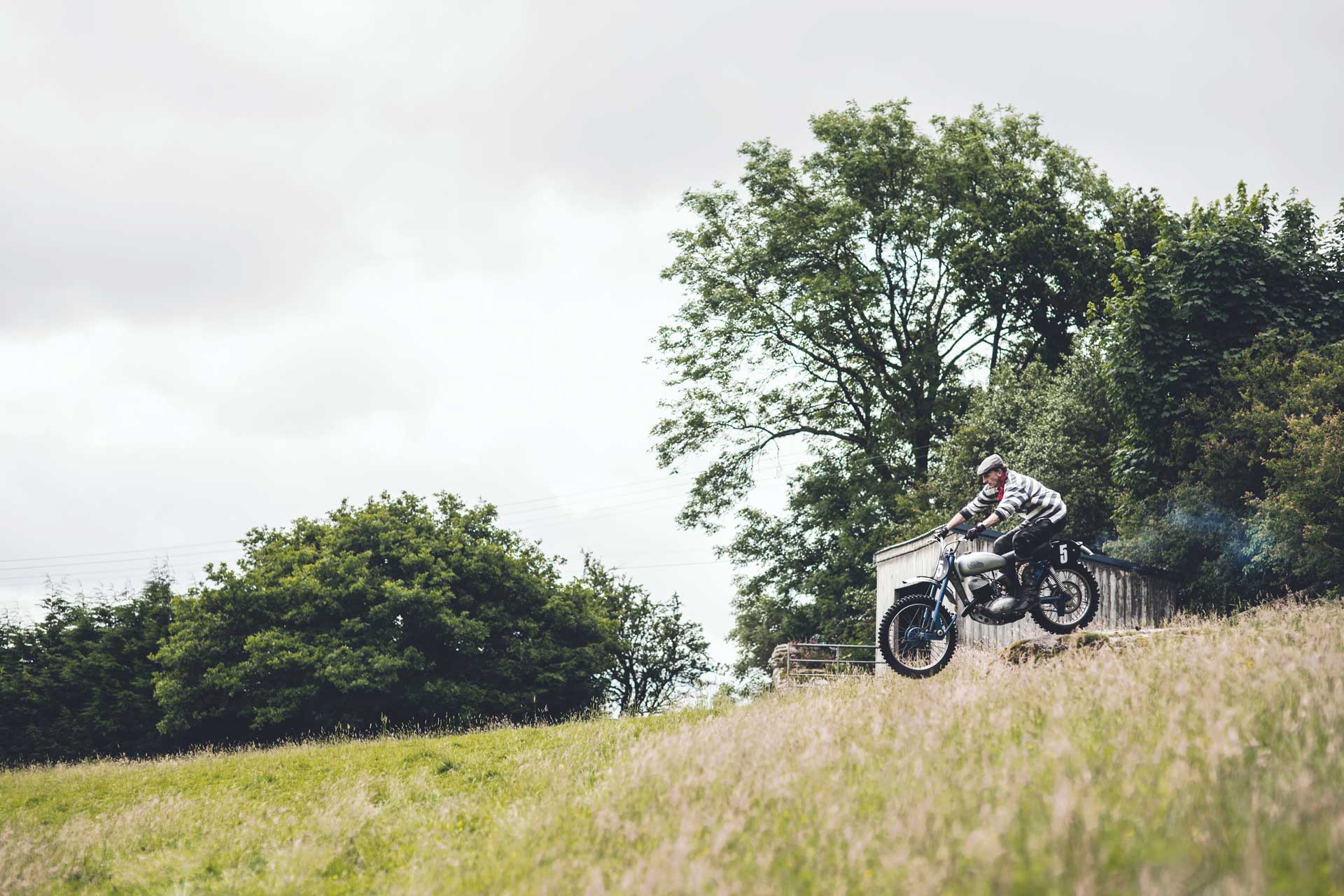 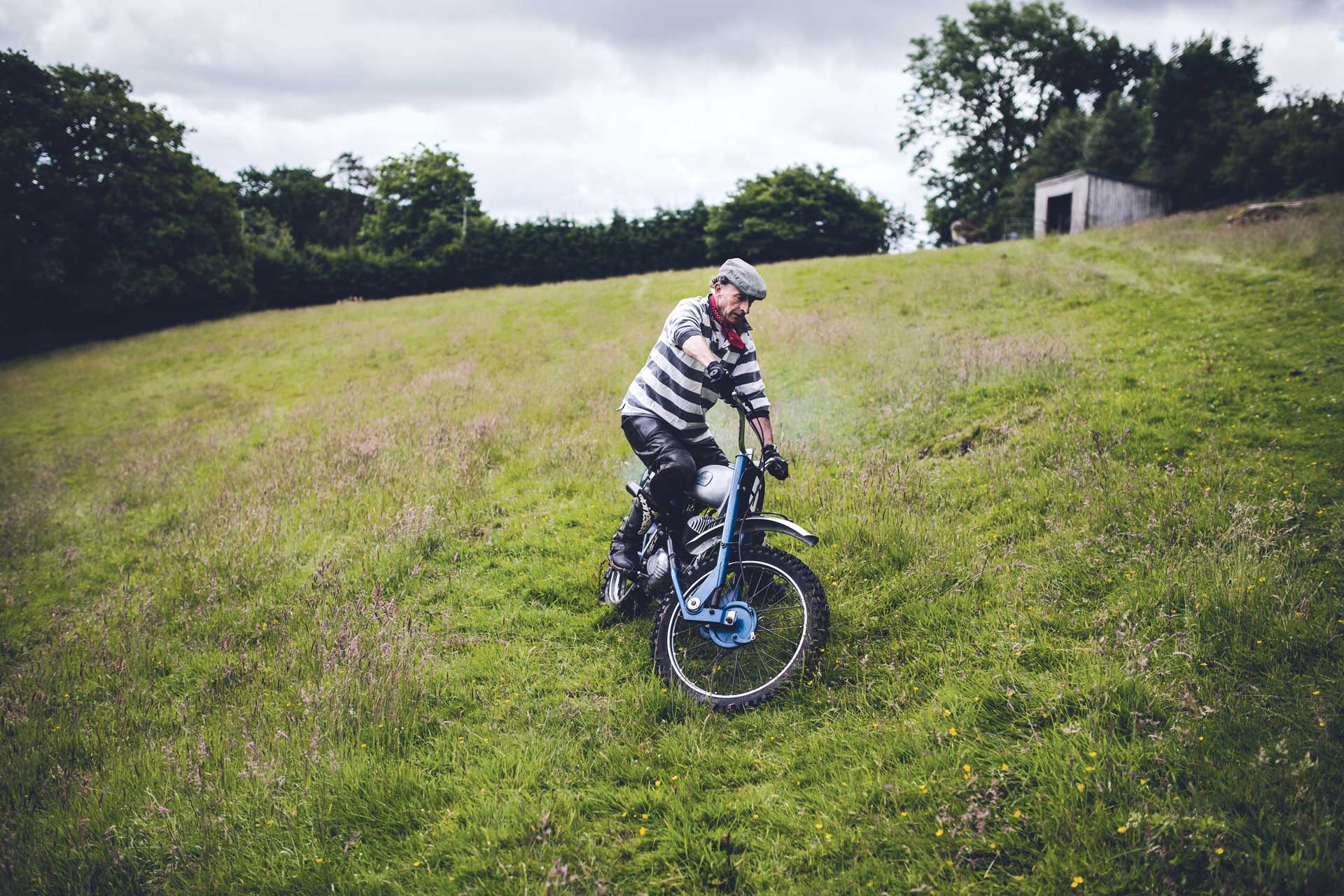 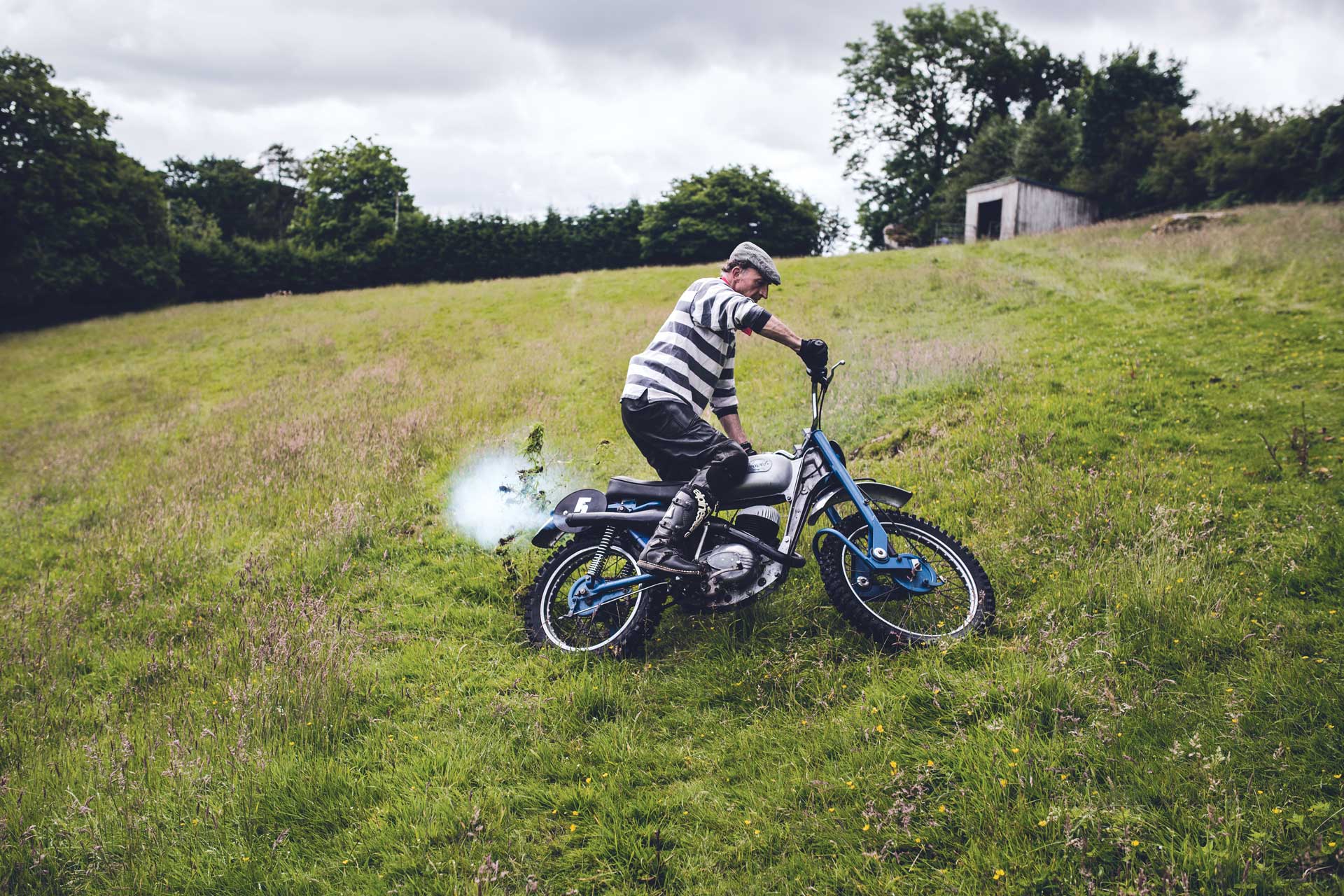 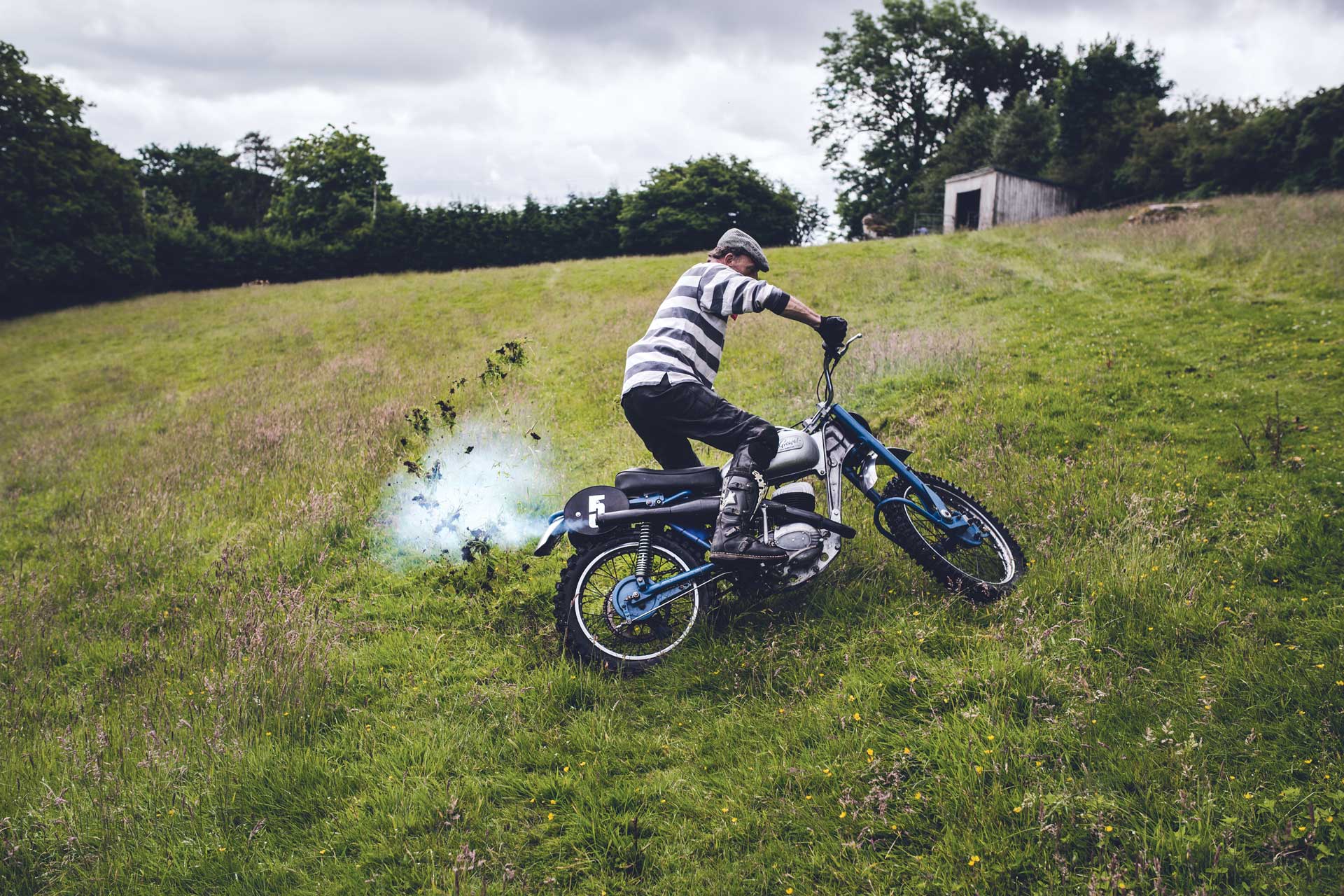 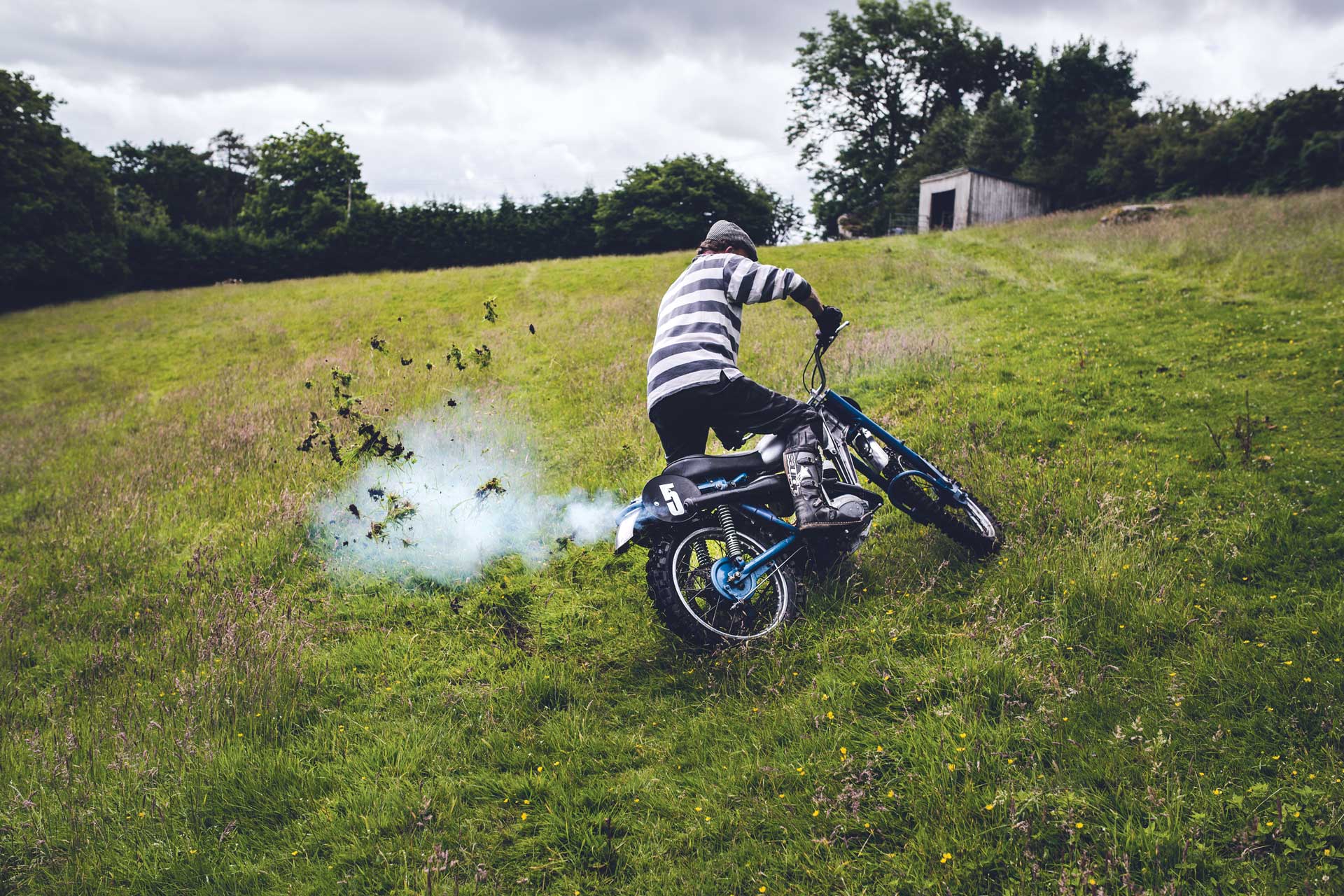 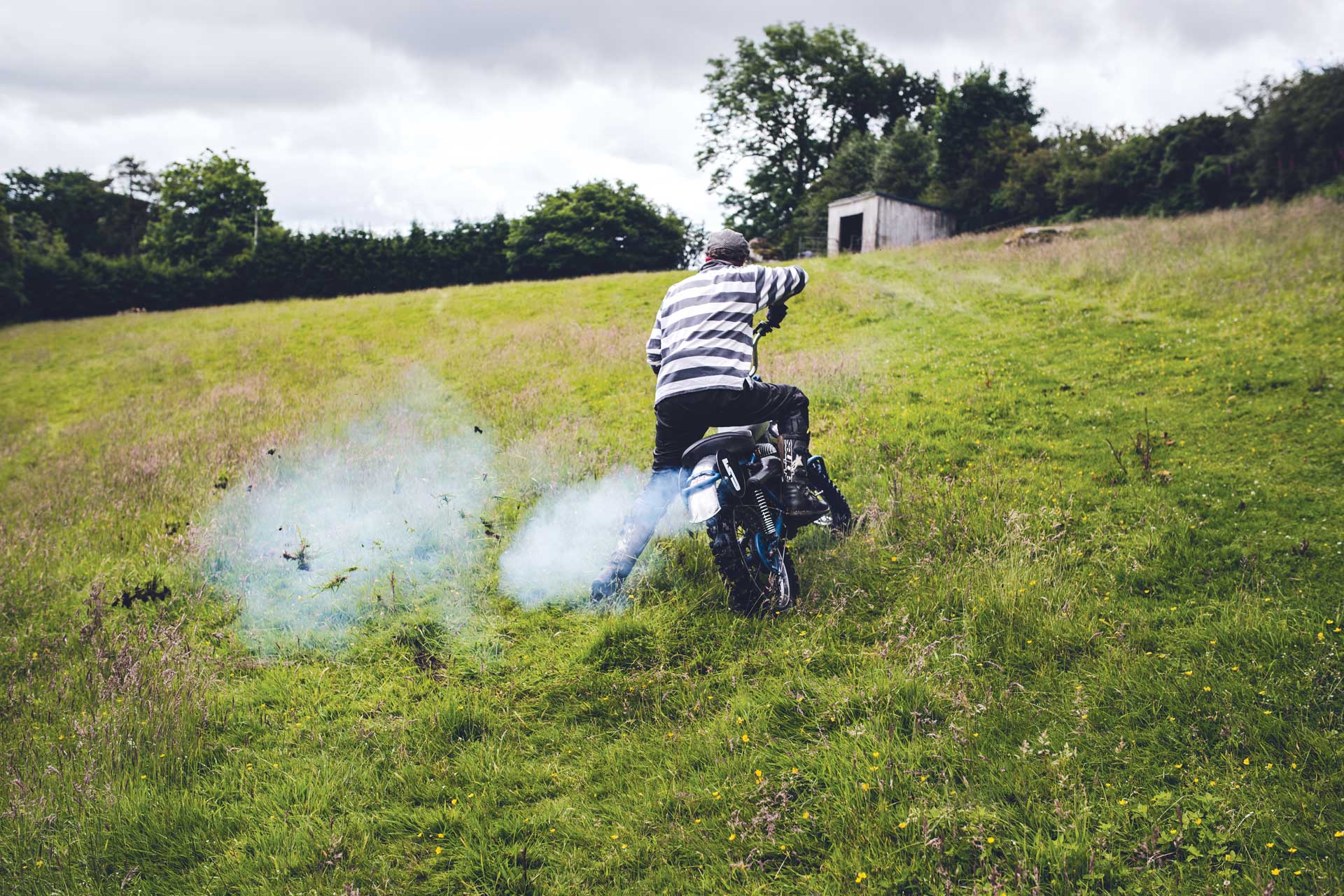 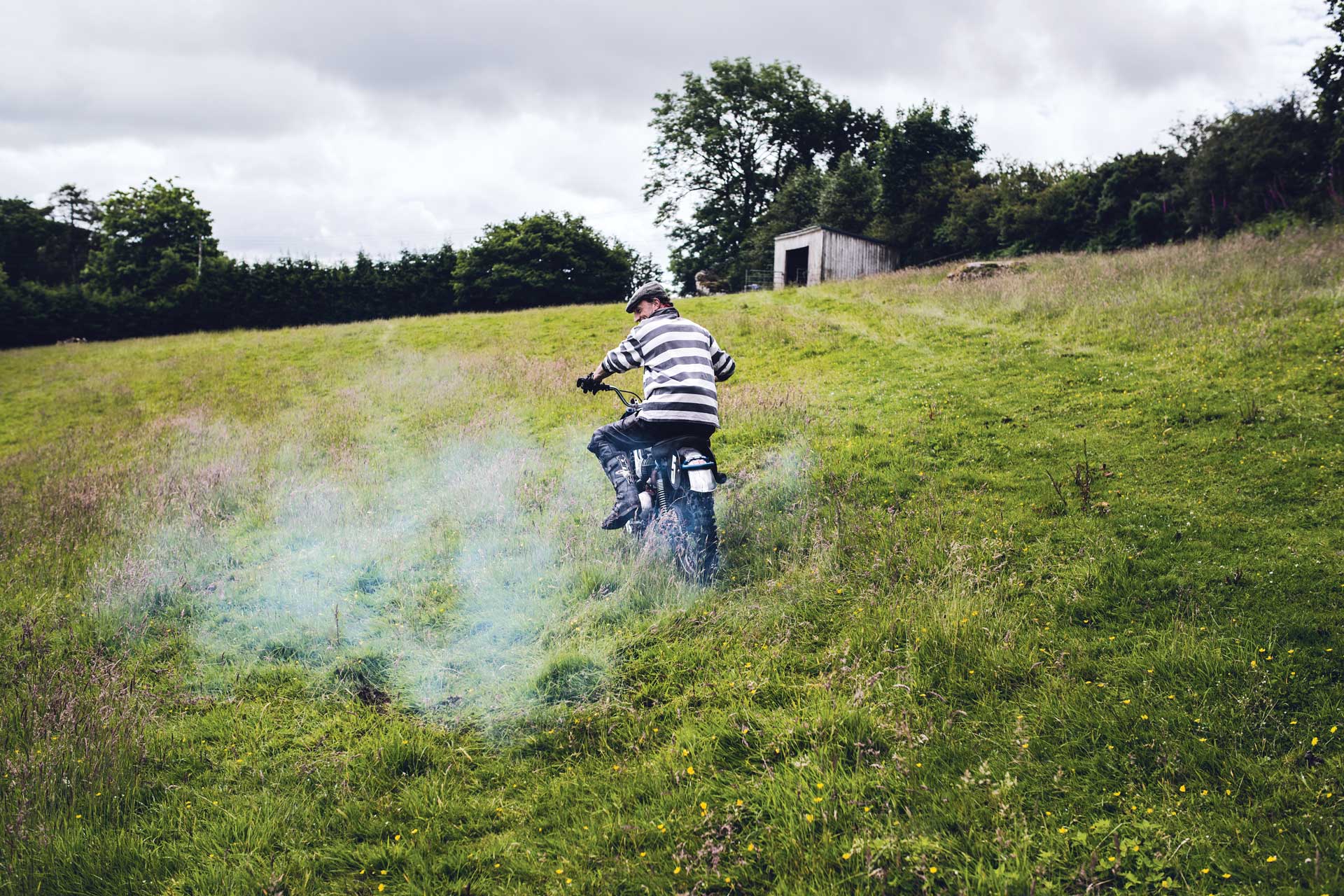 As many Revolution readers will know, “Incabloc” is the trade name for the ingenious system devised during the 1930s by Swiss engineers Georges Braunschweig and Fritz Marti whereby the jewel bearings supporting the balance wheel are set in spring-loaded mounts to protect the pivots if the watch is jarred or dropped. In its day, it probably seemed as radical as the Greeves leading link front suspension did 20 years later. Incabloc worked so well that it came to be regarded as a must-have on any watch that was likely to experience a rigorous life, hence its adoption by makers renowned for producing chronographs, military watches or tool watches in general.

Lemania, of course, was well known for all three, having been founded in 1884 by former Jaeger-LeCoultre employee Alfred Lugrin as Lugrin S.A., a specialist maker of chronographs and stopwatches. Lugrin became known as Lemania in 1930, shortly before joining forces with Omega and Tissot to create SSIH, which, in turn, became the modern-day Swatch Group.

The association between Omega and Lemania led to the creation of some truly historic chronograph calibres, perhaps most notably the Calibre 1873 that was also known as the Omega 861. The 861 replaced the original 321 that was used on Speedmasters up until 1968 as it was considered more robust due to its slightly simpler construction. It was, therefore, a Lemania 1873/Omega 861 that powered Buzz Aldrin’s Speedmaster during his historic moonwalk.

Prior to that, however, Lemania chronographs had already proved themselves “flight qualified” and capable of passing military muster, as evinced by the glossy black dial, lovely buff-coloured markings, bi-compax dial arrangement and, of course, the “Government property” arrowhead that hints at our watch originally having been service issue – a possibility confirmed by other markings on the case indicating that it was originally supplied to the Royal Navy’s Fleet Air Arm, probably around 1964.

Compared with a day spent at the helm of a Greeves Hawkstone, however, the life this elegant tool watch might have spent in the cockpit of a Fairey Gannet – the Fleet Air Arm’s workhorse aircraft of the early 1960s – probably seemed rather luxurious.

Although there may well have been the odd call to “scramble”… 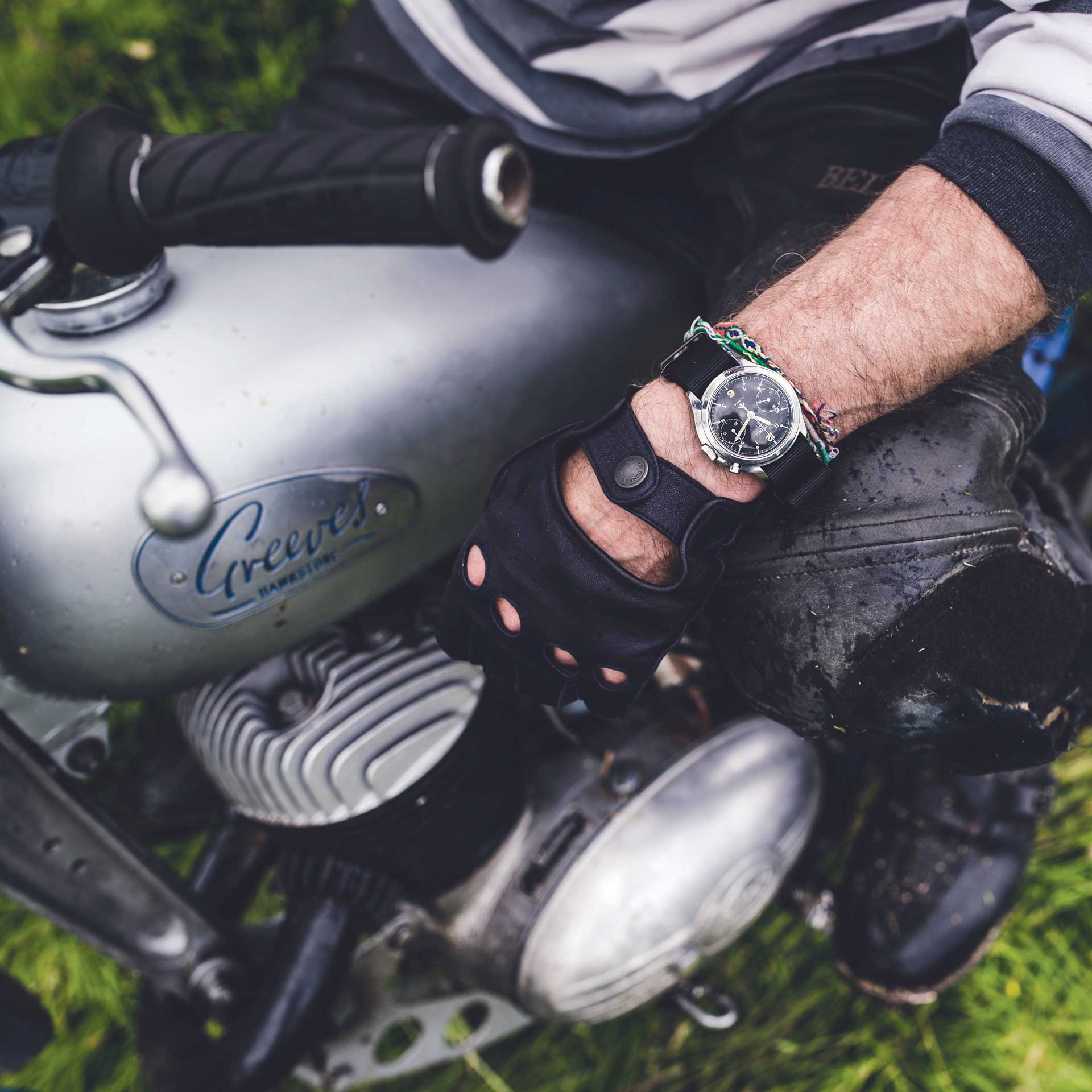 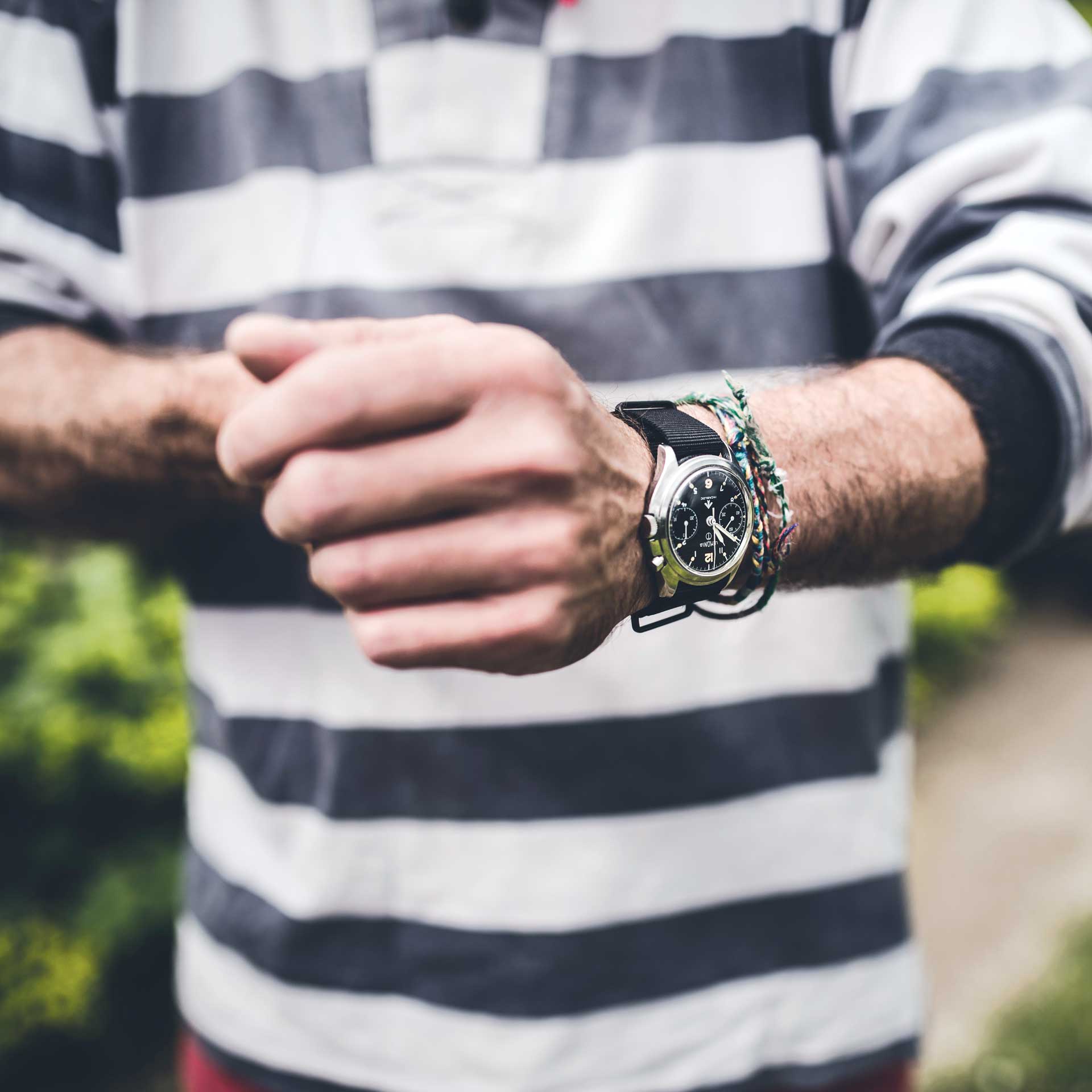 Without their generosity, this whole thing could have been avoided!