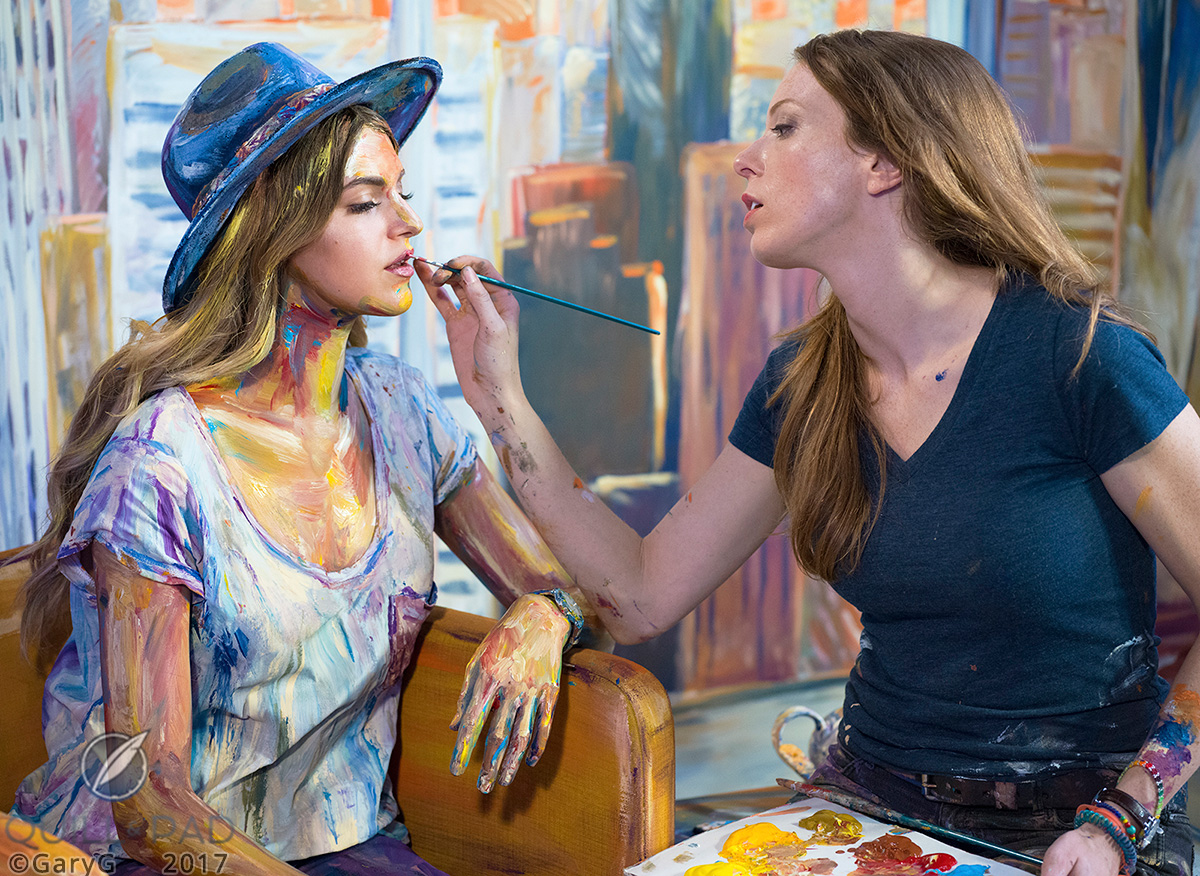 Oh, to be an artist! While in my day job I’m rumored to be a moderately creative guy, and in my youth I was a bit of an instrumentalist, suffice it to say that when it came to drawing and sculpting I never really showed any aptitude.

That hasn’t kept me from admiring the works of visual artists, though, and over the past several years my attention has been drawn to the works of one painter in particular: Alexa Meade. 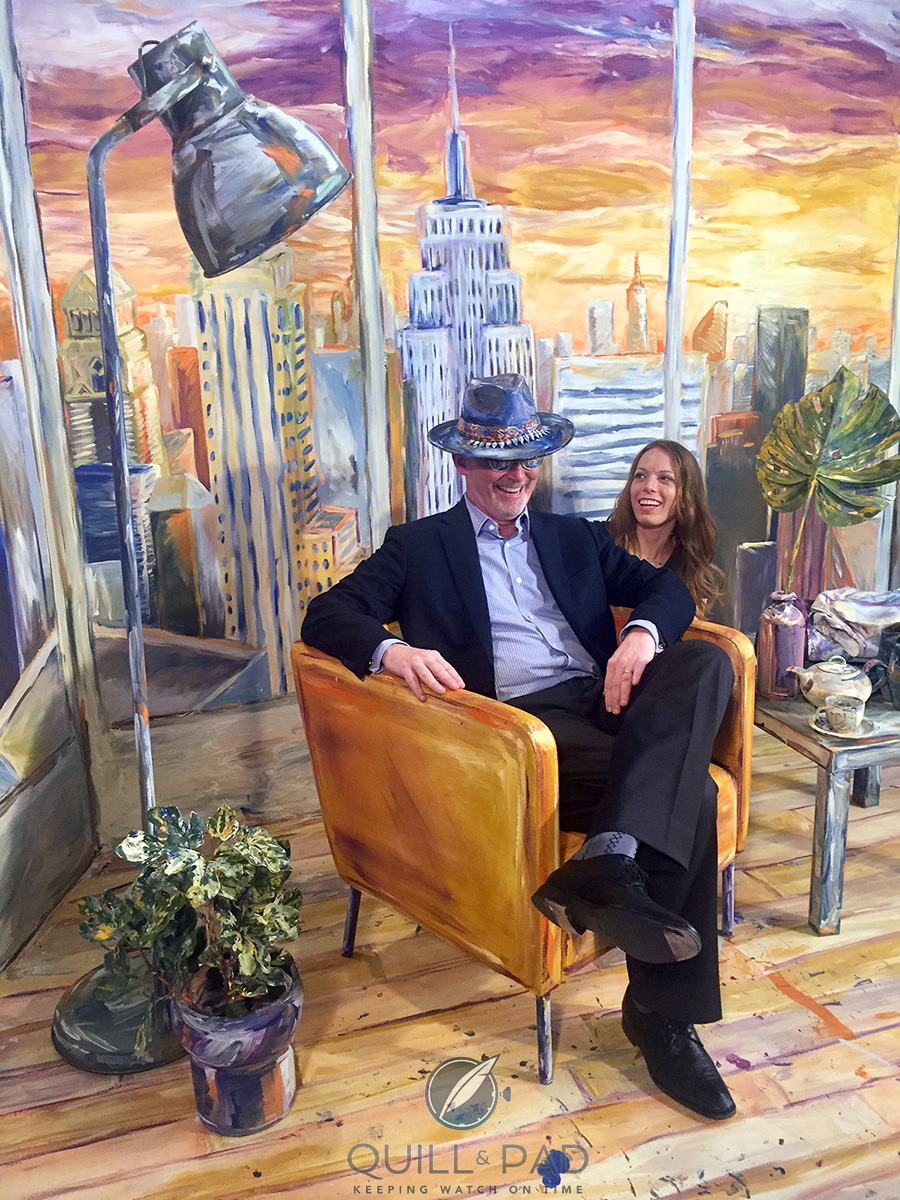 Meade’s claim to fame is that, while other artists have spent the past 500 years perfecting methods for portraying depth on flat surfaces, she has gone in the opposite direction by developing techniques that allow her to paint three-dimensional objects, including people, in ways that make them look for all the world like flat canvases.

When I found out that Meade was going to be creating a new work at Baselworld this year on behalf of Maurice Lacroix, I could hardly wait to see her perform. And thanks to my friends at the brand, I had the opportunity to get closer to the action than I would have imagined possible.

Upon my arrival at Baselworld 2017 I headed for the Maurice Lacroix booth, where I had the opportunity to take a look at some of the brand’s 2017 introductions. While Meade’s appearance was tied to a promotion for Maurice Lacroix’s Aikon line of quartz-powered timepieces, not surprisingly my attention was drawn to the offerings on hand from the Masterpiece line. 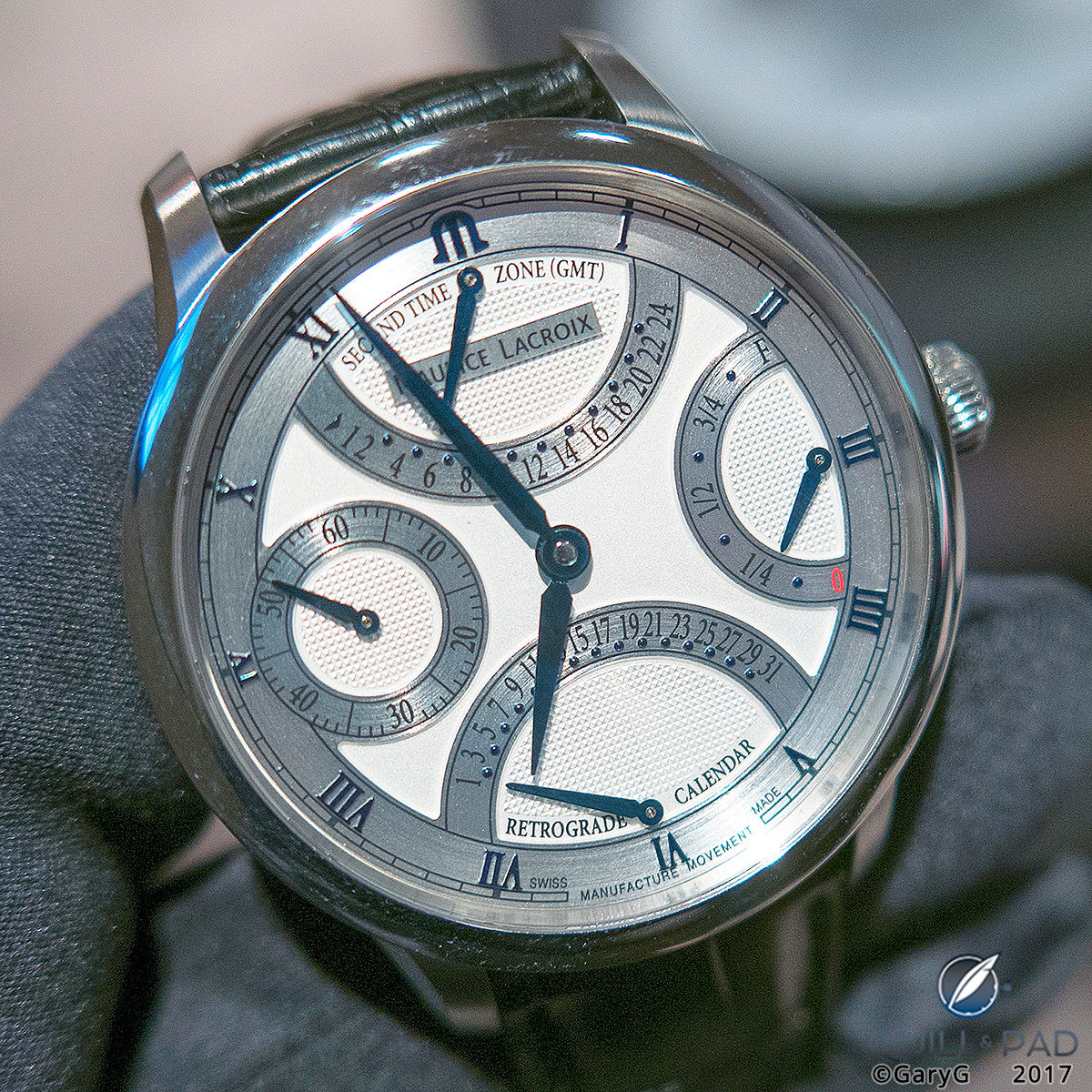 As a fan of retrograde complications (and one-time owner of a Maurice Lacroix jumping hour watch), I particularly appreciated the Double Retrograde with its jumping calendar and second time zone indications. The blue-hued version of the Masterpiece Chronograph Skeleton drew my eye as well. 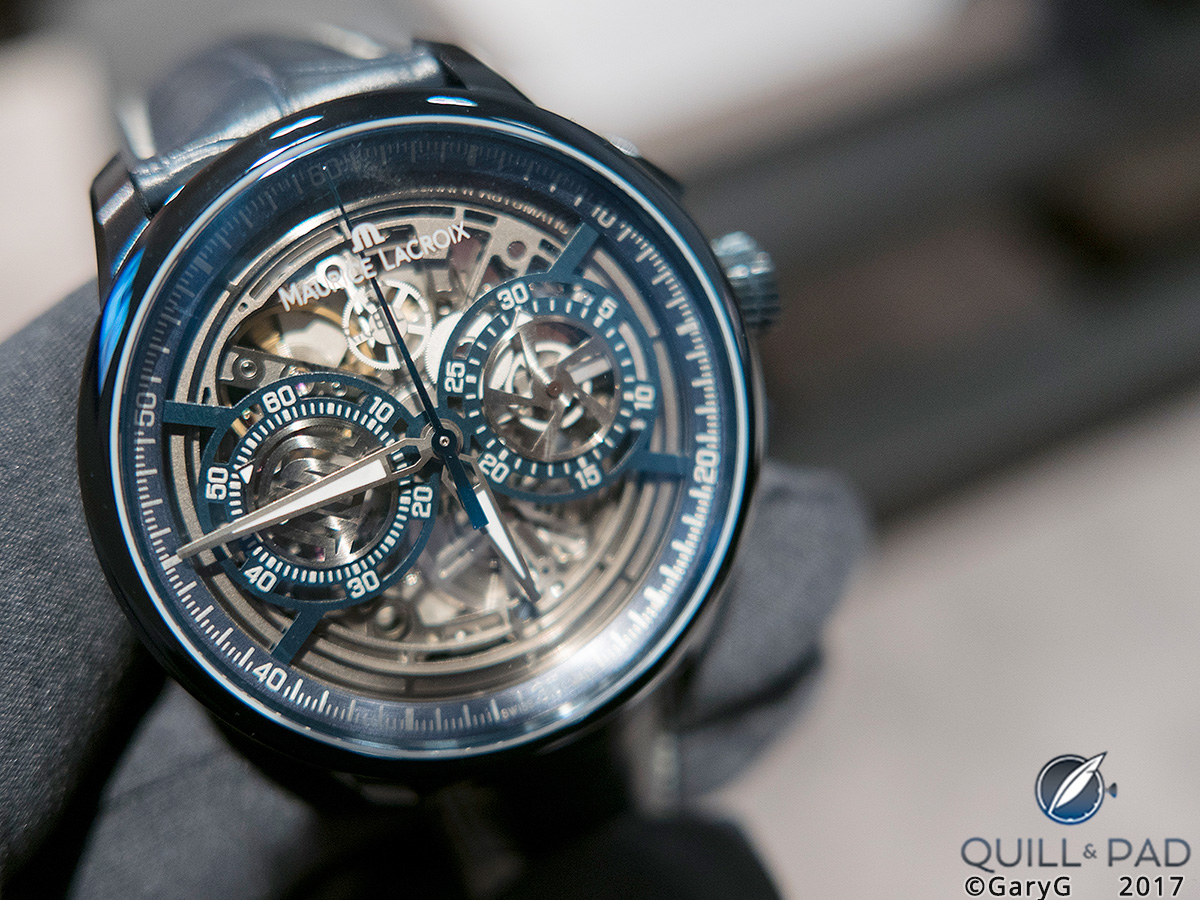 Next, it was off to meet Meade and her assistants, who were toiling away in an enclosed area behind the Maurice Lacroix booth painting the backdrop for the scene that would unfold in public the following day. In keeping with the imagery for the Aikon advertising campaign, the backdrop was to show a Manhattan cityscape as seen looking downtown from an apartment on Central Park South. 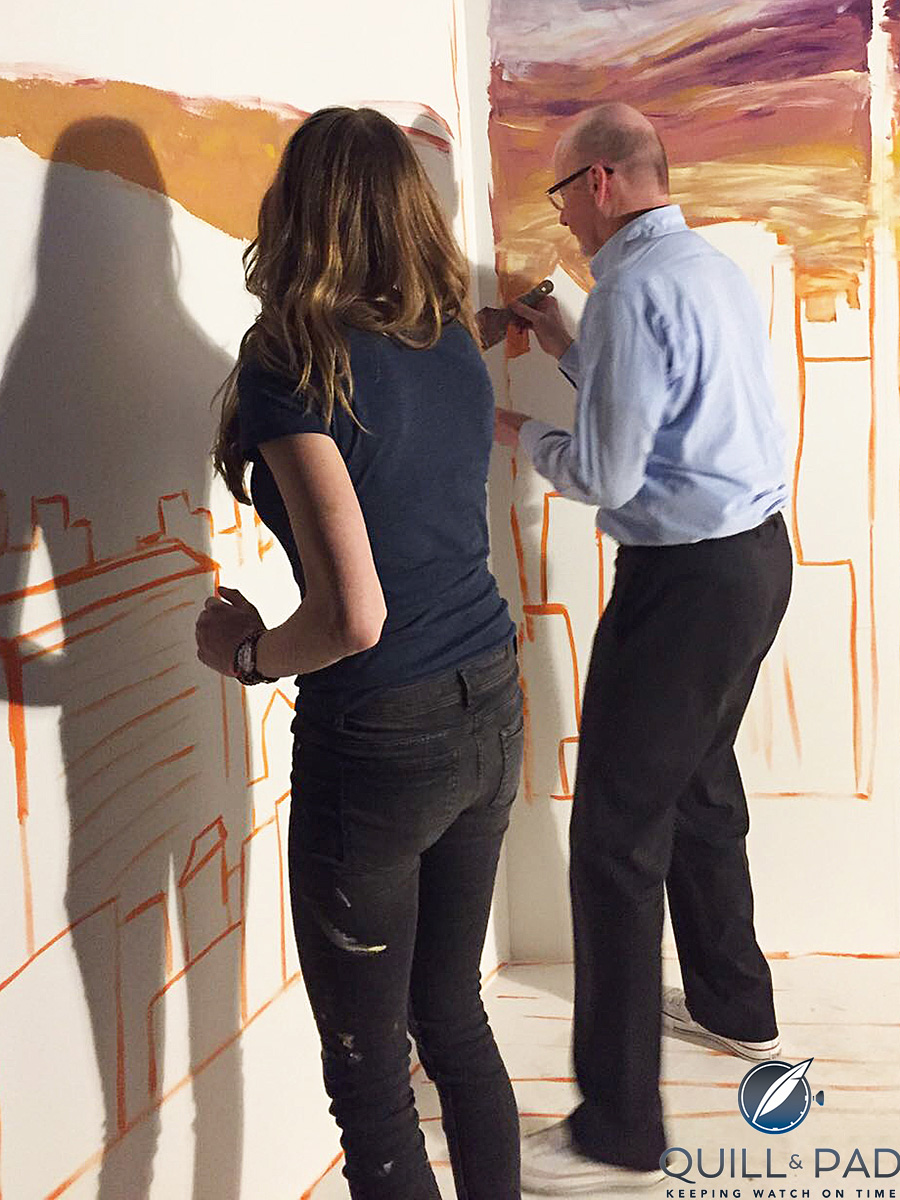 Getting into the act: GaryG pitches in (photo courtesy Maurice Lacroix)

A cordial greeting and a bit of small talk unexpectedly led to an invitation to get involved in the work: I was entrusted with a brush, dollops of orange and yellow paint, and instructions to fill in part of the lower sky above what would become depictions of the buildings in the New York skyline.

And before I could say, “I got a C in junior high school art class,” I was brushing away! 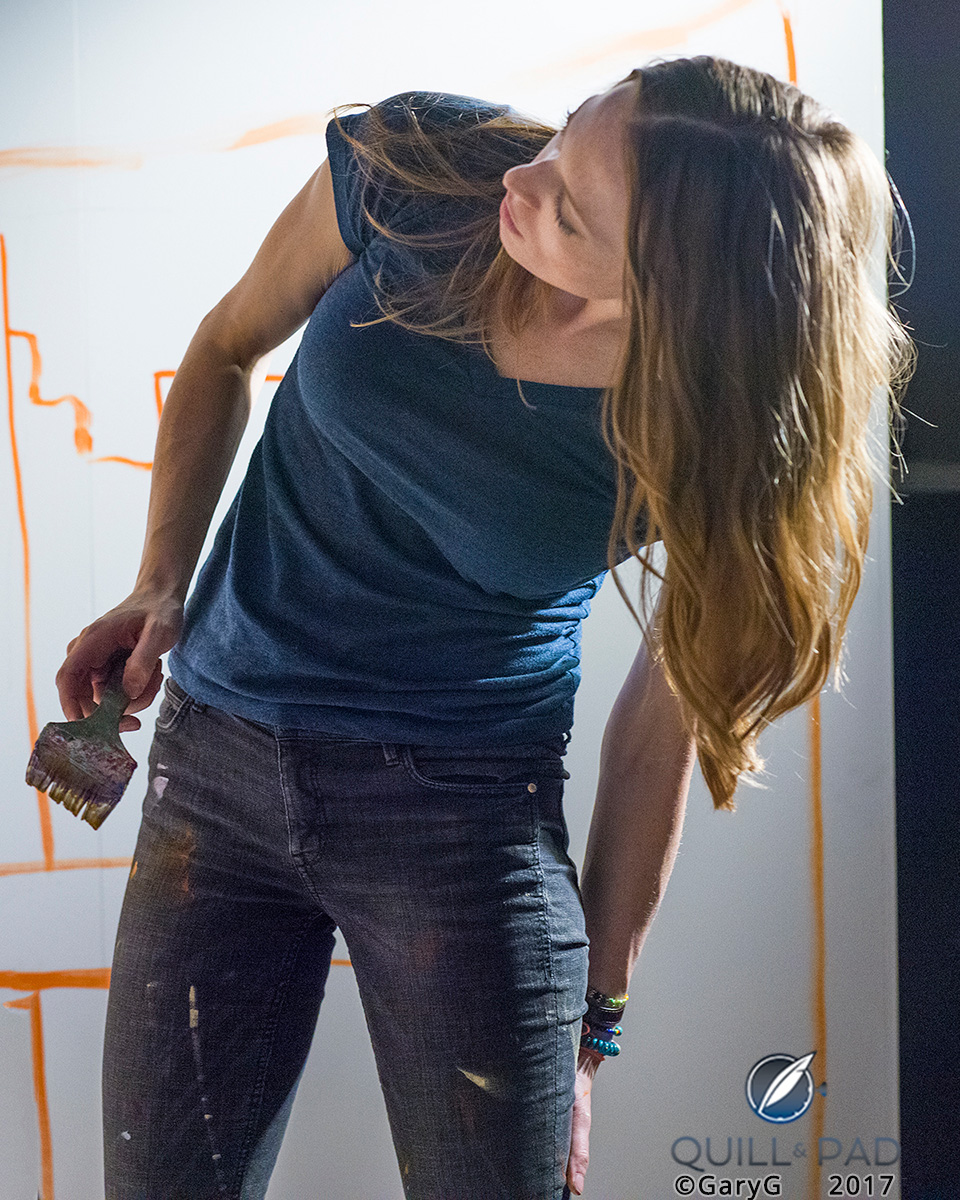 The good news for me was that as a volunteer helper I didn’t put in the late night that Meade and her team did to finish the backdrop, instead opting for beers with the Grönefeld brothers and dinner with a group of collectors and independent watchmakers. But that’s a story for another time.

By the time I arrived at the show the next morning, the backdrop had been moved into place at the front of the Maurice Lacroix booth, and Meade was hard at work painting every object – from chair to lamp to potted plant to teacup – that was going to be part of the scene. 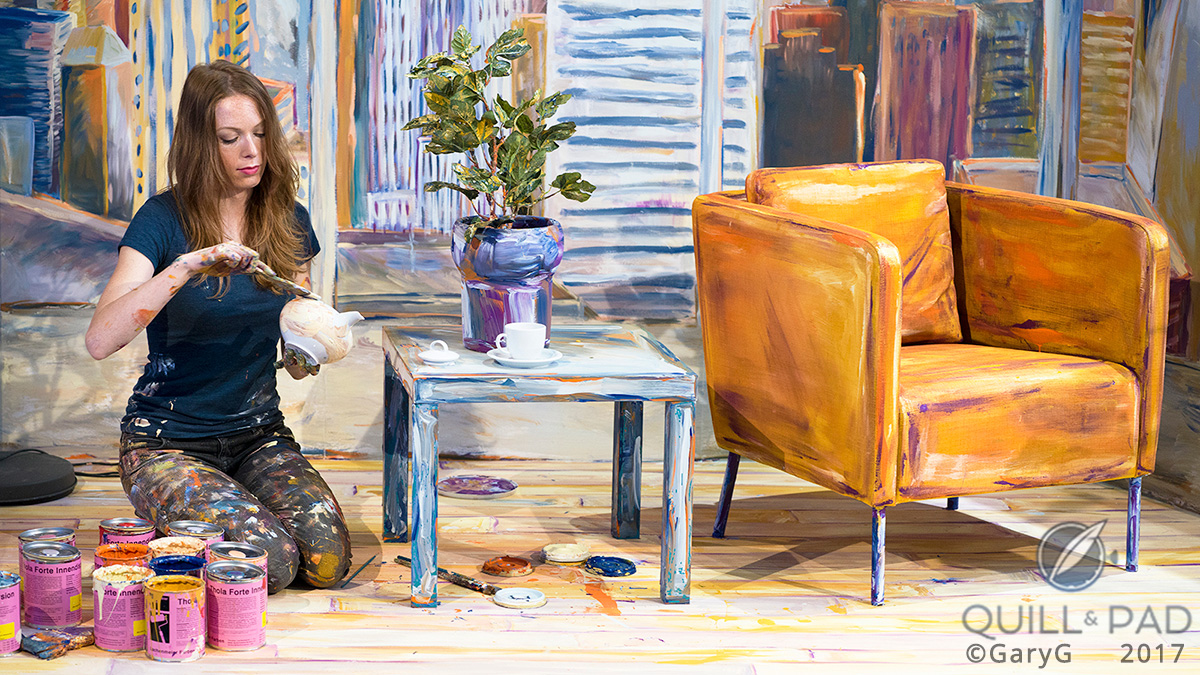 If you watch Meade’s TED talk, one of the things you’ll hear her say is that her initial fascination wasn’t with painting, but with shadows. She began to paint as part of trying to capture shadows in a tangible way.

Clearly, the ability both to remove and suggest shadows through the use of color and tone is at the heart of Meade’s technique in converting three dimensions to two, but even having seen it done before my eyes I don’t have a clue as to how she does it.

After lunch, the model arrived, and Meade began the painstaking work of painting the model’s image on top of the model herself, a process that took several hours from start to finish.

Of course, the Aikon watch worn by the model also received the Meade treatment, captured (as was the rest of the performance) on video and shown on a large screen above the backdrop. 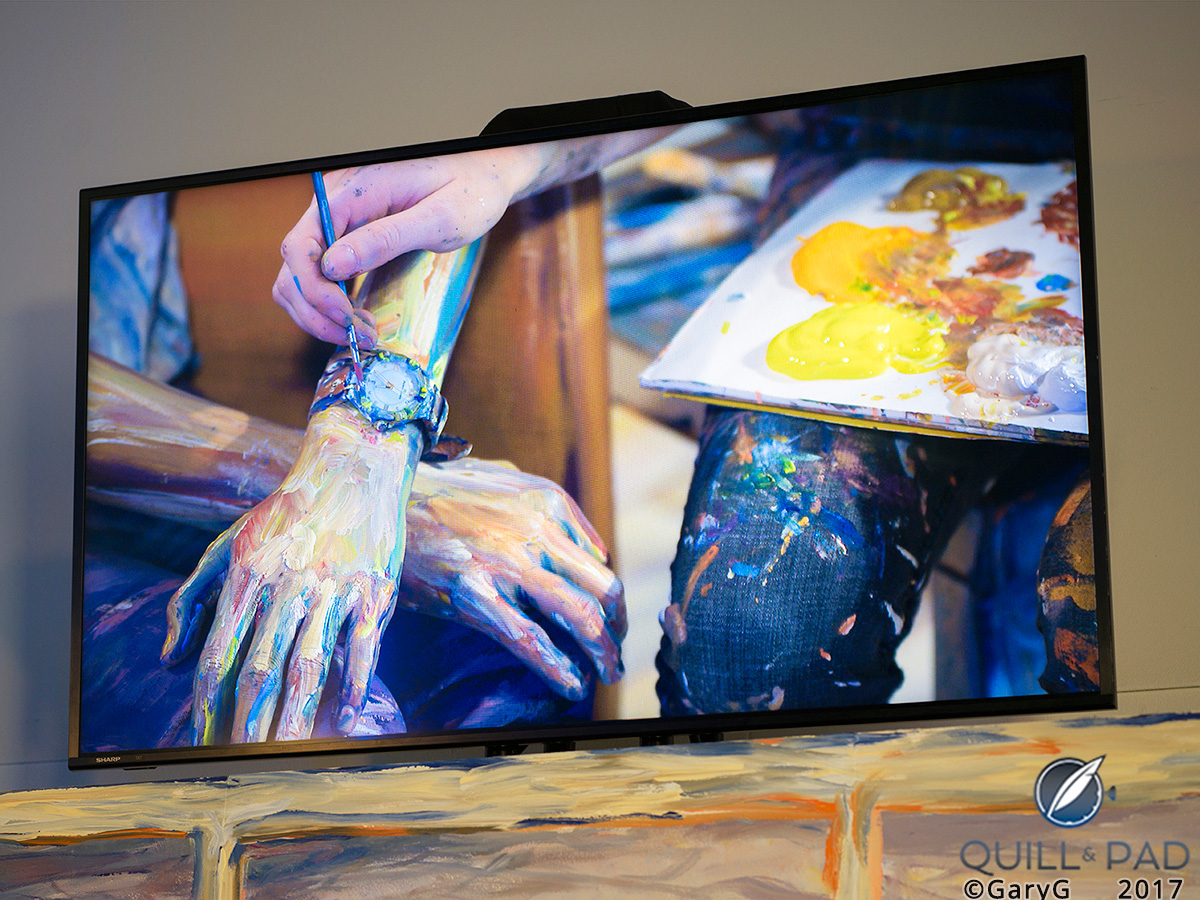 I should mention that because of the lens/camera combination I was using, my photos show somewhat greater depth of field (and therefore seem more three-dimensional) than what the human eye sees.

The video image captured above, and Meade’s own photos of the finished work, are more representative of what the spectators actually saw that day. 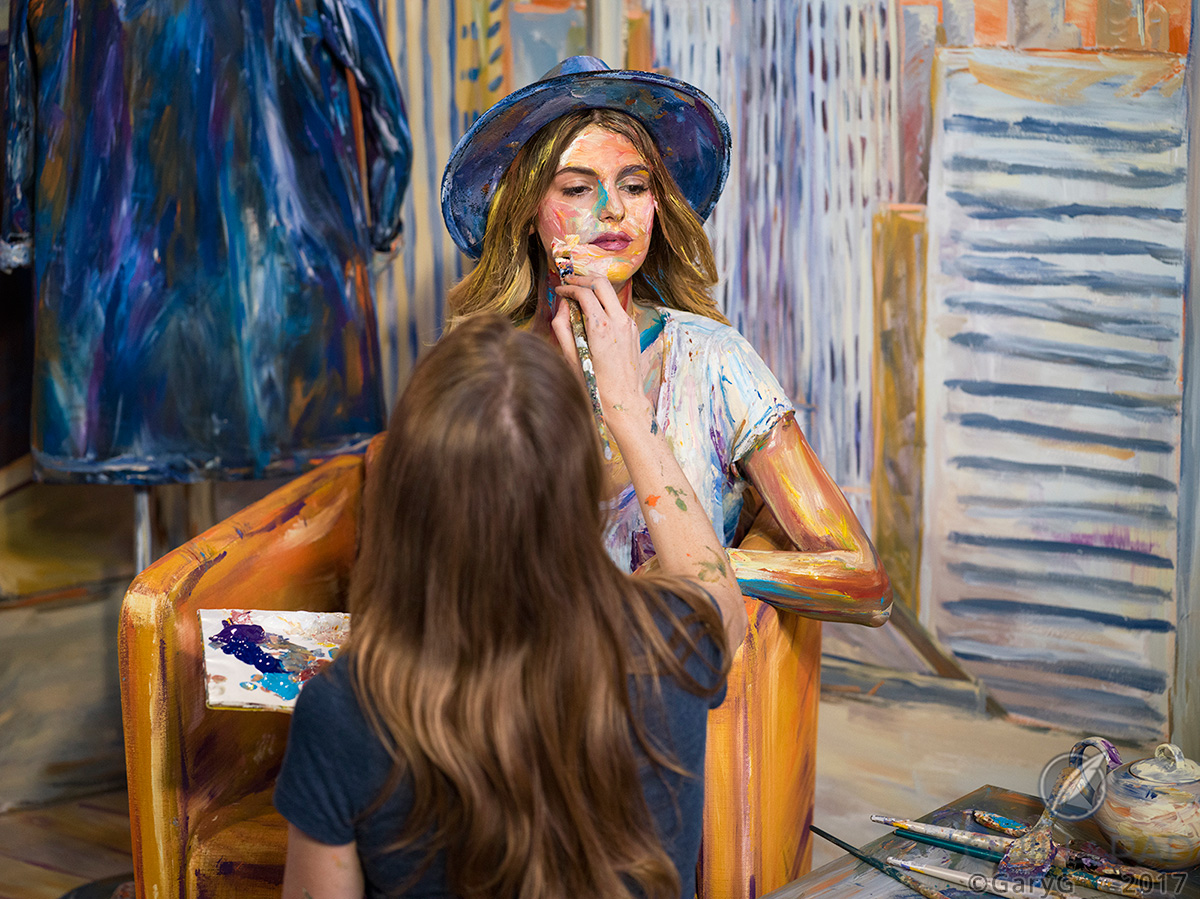 Getting close: finalizing the transformation

My minor participation in painting the backdrop turned into a bit of a running gag throughout the day, as any time I was in the vicinity of Meade’s public performance she would point out “my” small swatch of sky as a highlight of the work. At one point, she introduced me to the observing crowd of about 30 viewers as “a collaborator in the painting,” much to my good-natured chagrin.

With the painting complete, it was time for Meade to position the lights and use her camera to capture her vision of the completed work. 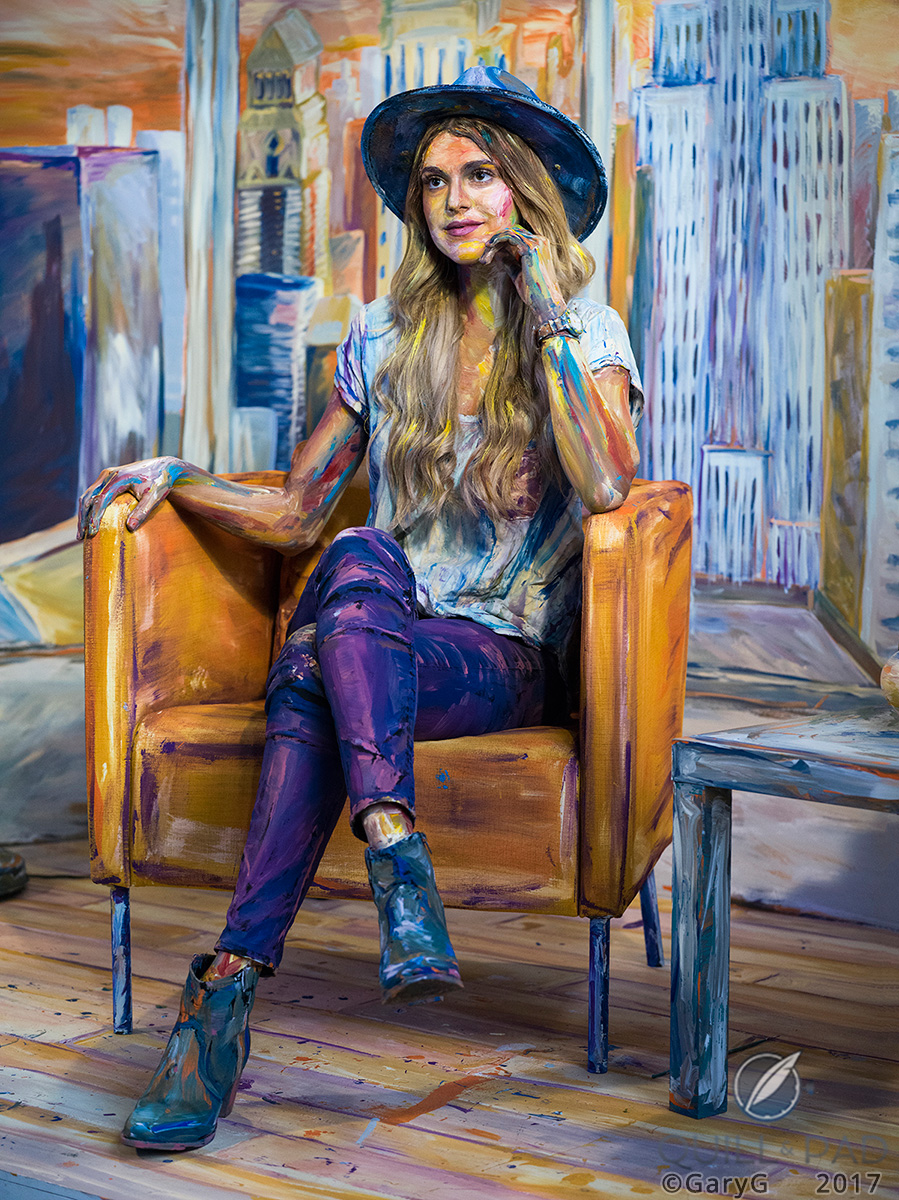 Pretty as a picture: one of the author’s views of Alexa Meade’s work

Unlike many artists (and artists’ agents), Meade also encourages members of the audience to capture their own perspectives of the scene. To me this shows the tremendous confidence that she has in her ability to make the transient embodiment of her vision permanent in a unique way and a savvy appreciation of the power that broader display of an artist’s work has to create a following. 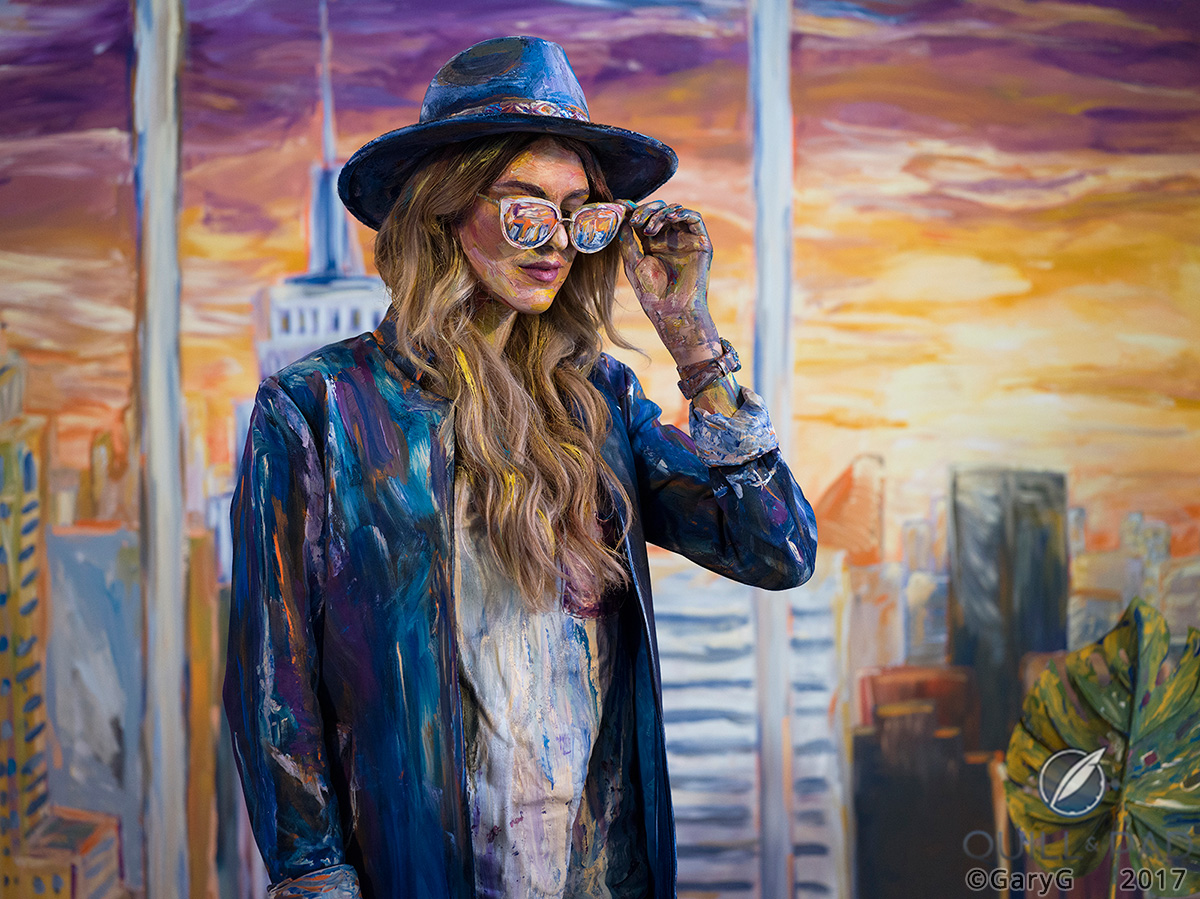 This is not a hat. Or is it? Alexa Meade’s dimensional art, Baselworld 2017

It was fascinating for me to watch the photo session, which was a mixture of still life photography and fashion shoot. And while staying clear of the professionals at work, I had the chance to capture several perspectives of my own. 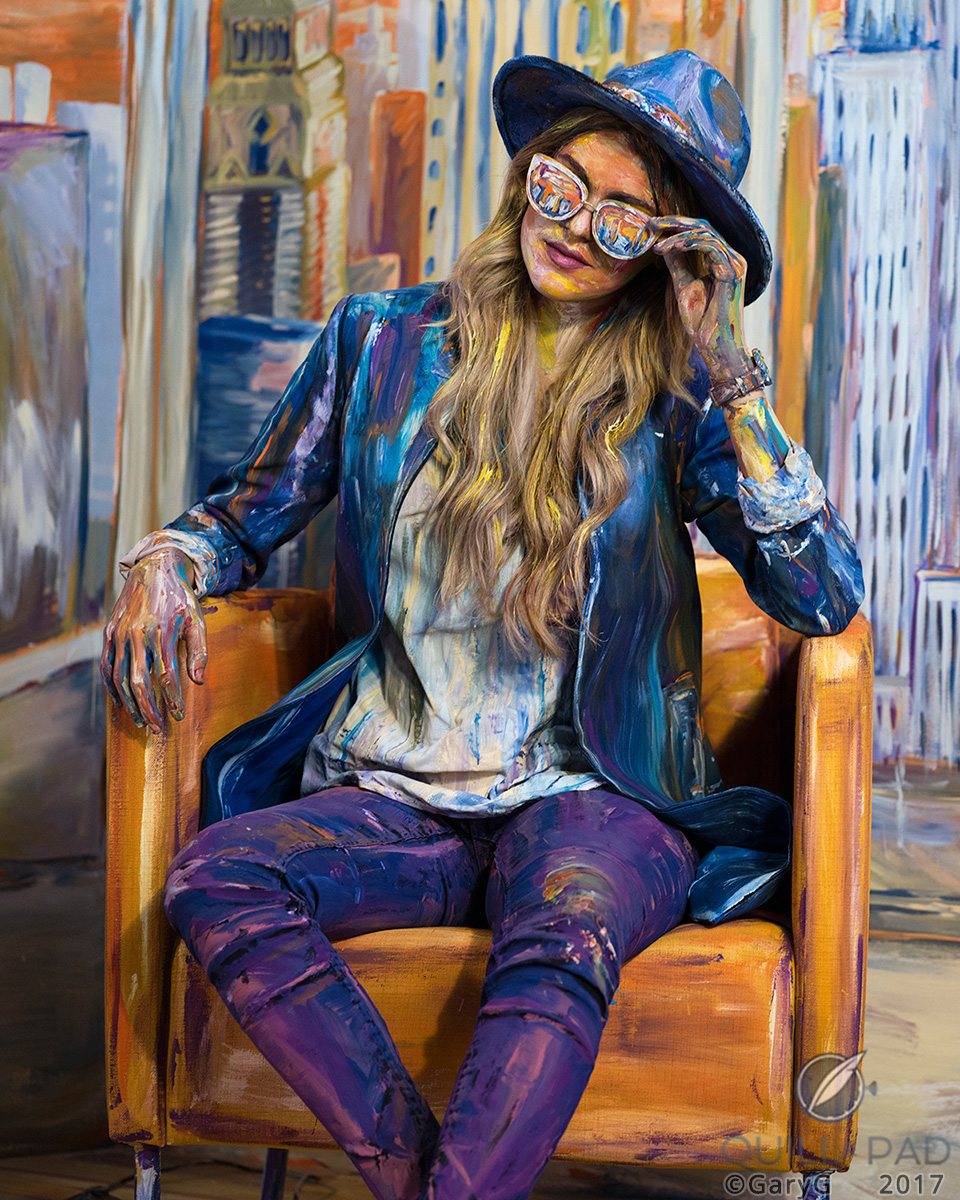 Home alone: the illusion of New York on canvas

After the formal photography was completed, members of the audience were invited on stage for their own poses with artist and model, giving more people a chance to play a role in the production. 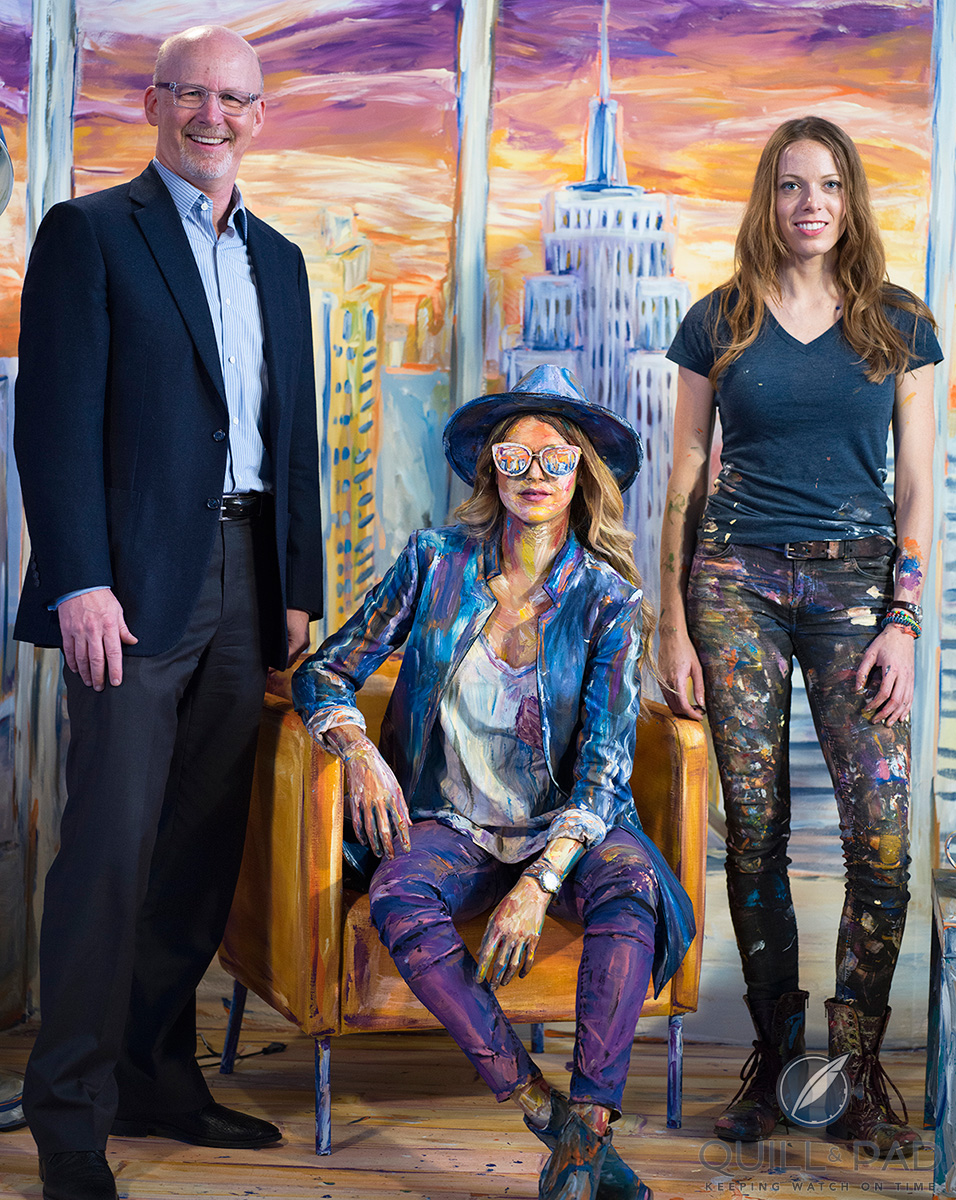 At dinner that evening with the Maurice Lacroix team, watch pal Michael and I had the delightful opportunity to talk with Meade at length. We learned a lot about her art, including similarities and differences between how painters and photographers address subject isolation and the use of shadows.

We also learned that Meade purposely utilizes fairly impressionistic brush strokes in order to avoid the uncanny valley effect, in which “too real” robots and other near-human forms cause revulsion in human viewers. If the film The Polar Express made you uneasy, you know what I’m talking about here.

At the same time, Meade proved to be wonderfully curious about the world of horology and more than intellectually nimble enough to pose some questions that had us “watch experts” scratching our heads a bit to answer!

At one point I felt inspired to launch into a discussion of the equation of time, providing the explanation that it represents the difference between time as shown on a clock and the time shown on a sundial. That led to some visualizations of the sun as a beach ball and of the earth as an orange on an elliptical orbit with a pencil as its axis and a toothpick representing the sundial.

Of course: shadows and light, watches and art; the succinct summation of an experience I will always cherish. 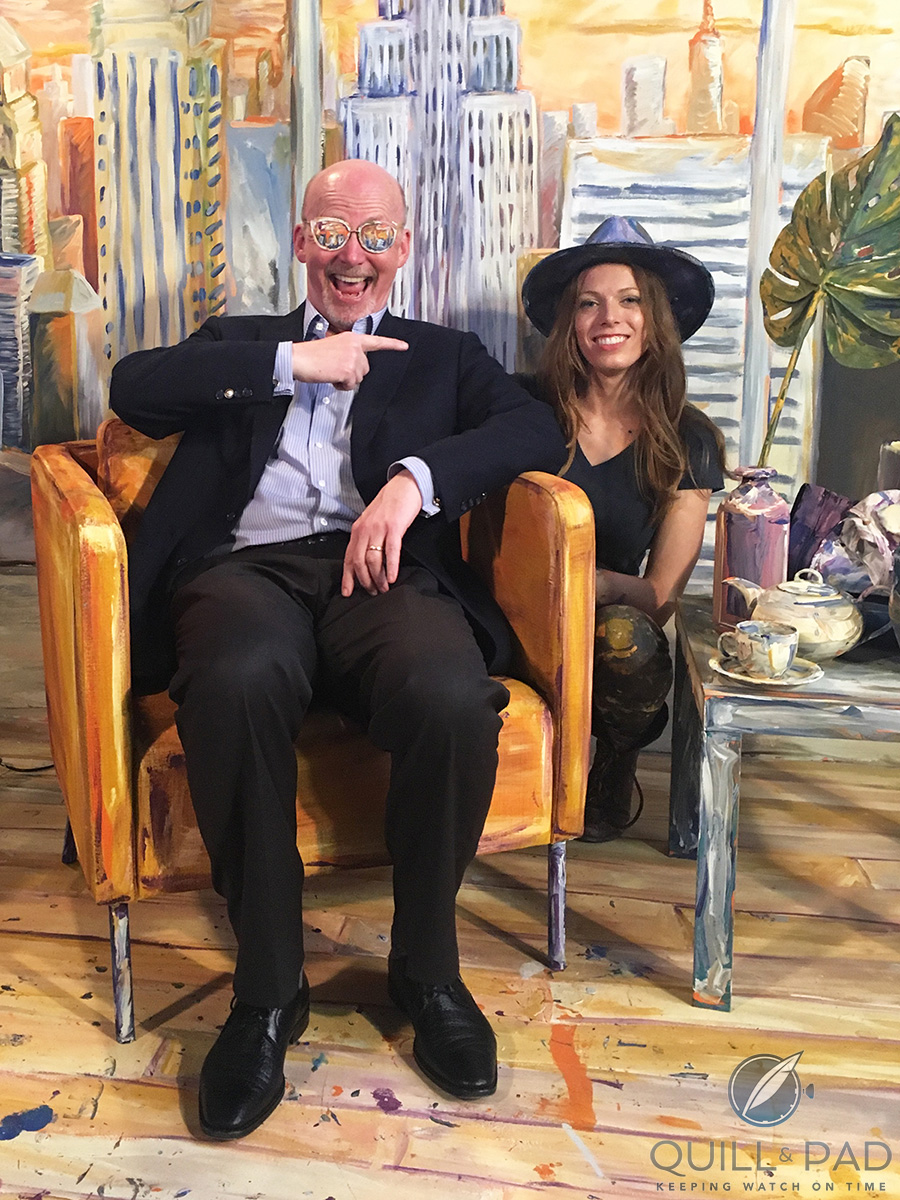 For more on Alexa Meade, please visit www.alexameade.com and for more on Maurice Lacroix visit www.mauricelacroix.com.