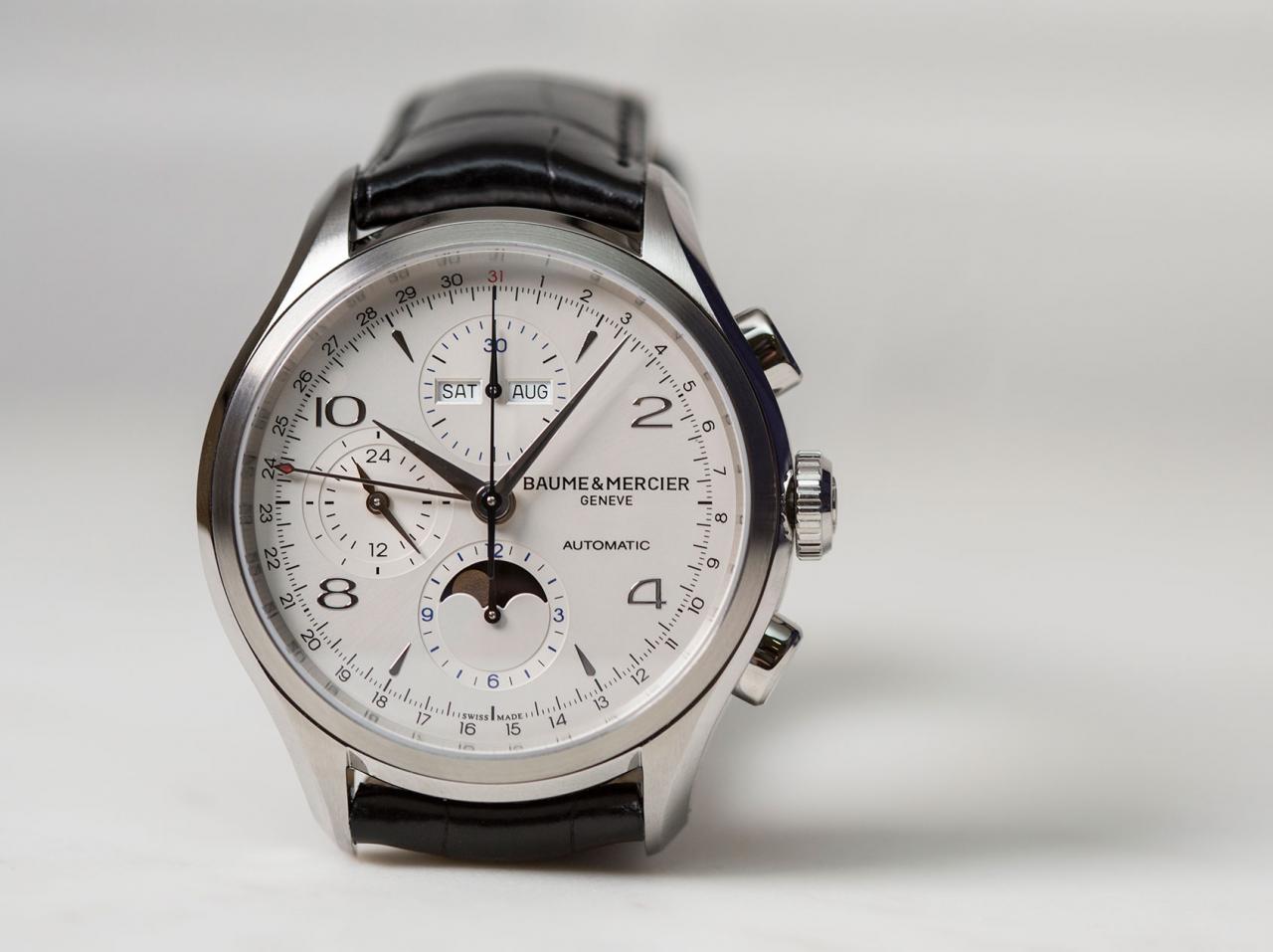 It’s hardly a secret. We like the Clifton at Time+Tide. It’s a well-balanced collection that walks a fine line between dressy and casual, retro and modern, all while being very well priced. Typically, though, these Baume & Mercier watches tend towards the simpler complications – calendar or moonphase or date – that sort of thing. Today we’re looking at a Clifton that loads all these complications into one watch. In theory it sounds good – more bang for buck, right? But in reality does all this added functionality detract from the simple allure of the Clifton? There’s only one way for us to find out. 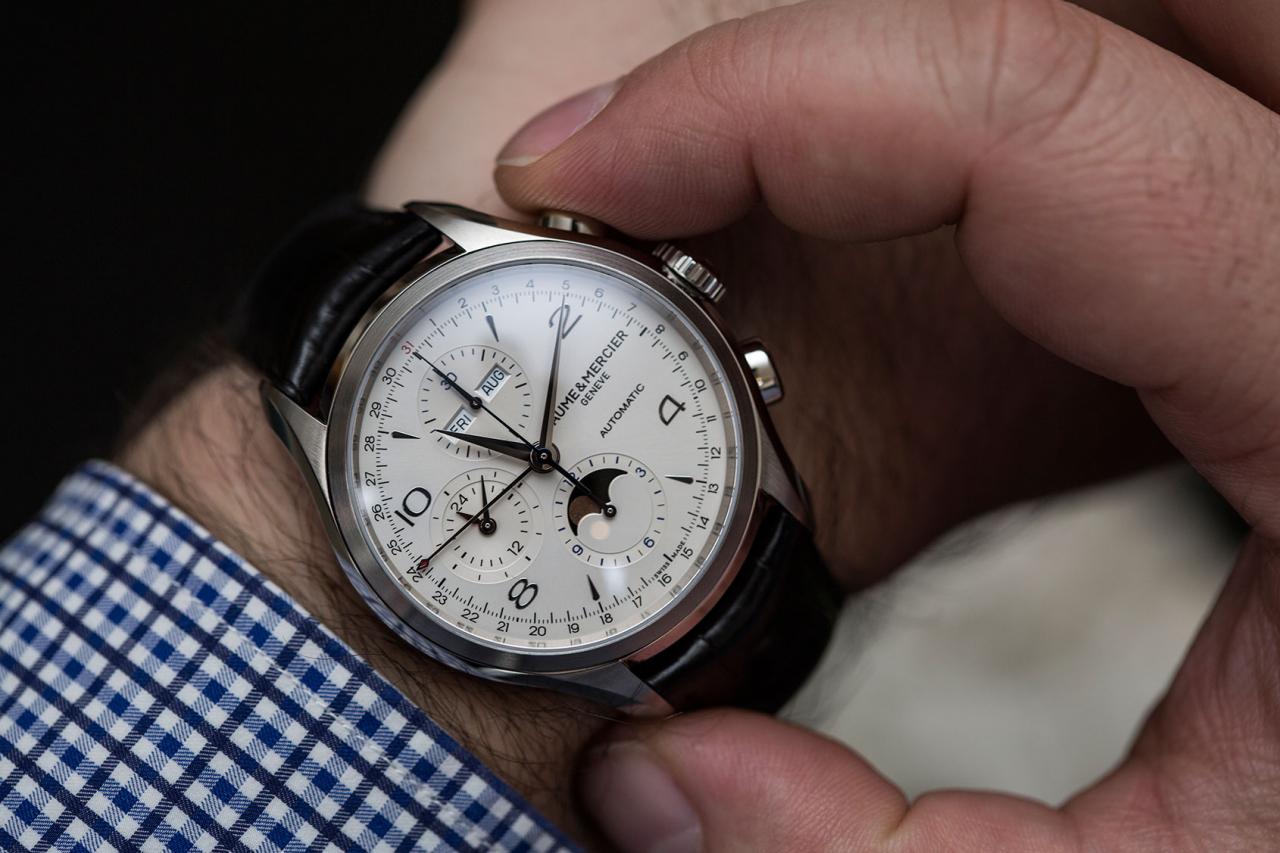 As is immediately obvious, there’s a fair bit going on here, but the Clifton does a good job of conveying a large amount of information with as little fuss as possible. First of all, the blued hands indicate chronograph functions – central seconds, with minutes and hours at 12 and six respectively. The subdial at 12 also has windows displaying day and month, while the date is displayed via the red tip central hand. In addition, there’s a moonphase nestled into the chronograph hour counter at six and a small seconds and 24-hour indicator at nine. Like I said, a lot of information. Thankfully Baume & Mercier know not to mess with the classics, and the layout is remarkably standard. I do wonder, though, about that 24-hour display; it replicates the main hands, and I think it’s a little superfluous. Small seconds only would have been cleaner, or better yet, lose that dial altogether and give the watch an interesting vertical bicompax layout.

In terms of aesthetics, the Clifton family resemblance is very much in evidence, with the silver-coloured satin dial and applied numerals and teardrop shaped indices. I particularly love the design of the four – so curvy and retro. 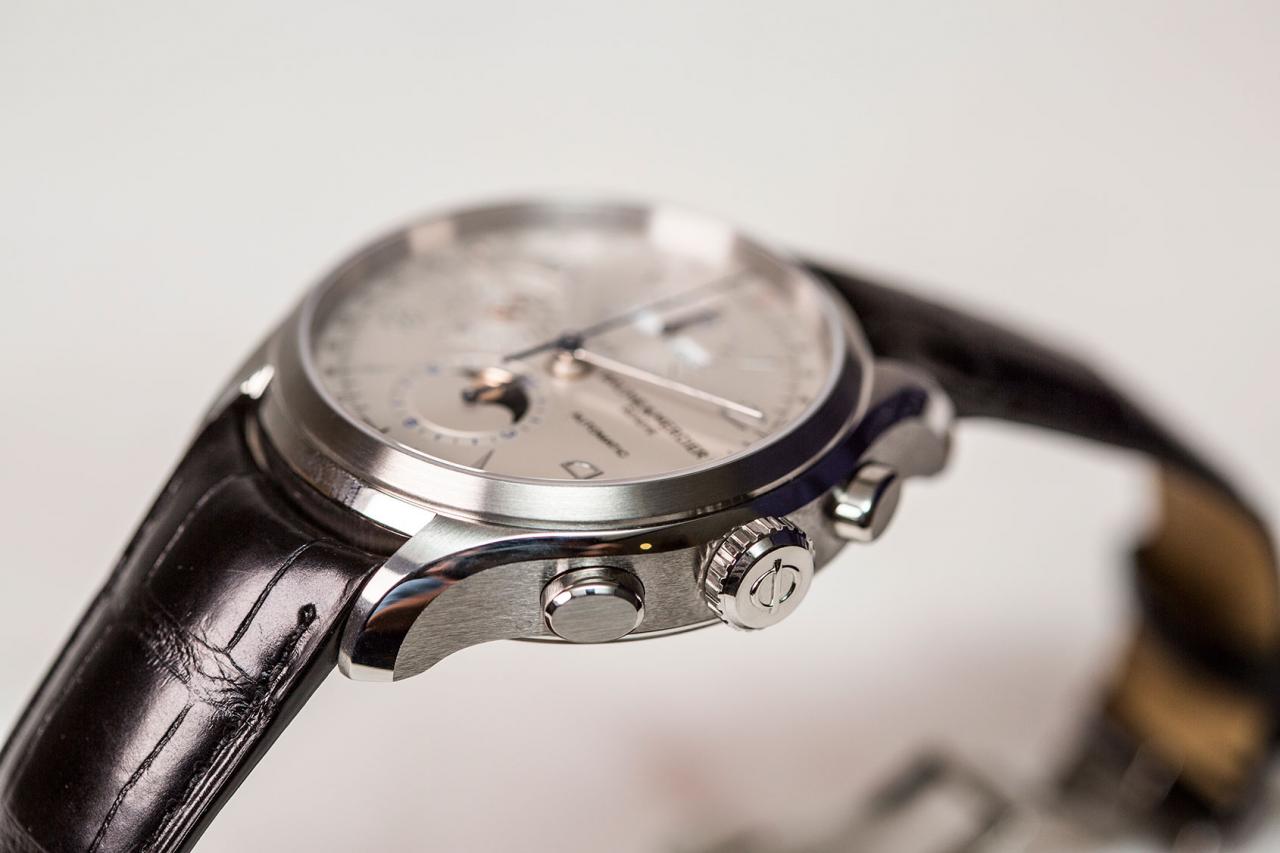 Generously sized at 43mm across and 12mm high, the Clifton Complete Calendar Chronograph wears well on the wrist, with a relatively slim crown and sporty, oval-shaped pushers. The mix of brushed and polished finishes keeps it interesting. It’s a little sad that this case lacks the finesse of the fancy lugs we’ve seen on the brand’s special releases (like the Perpetual Calendar), but it’s understandable, given this is a much more commercial watch. 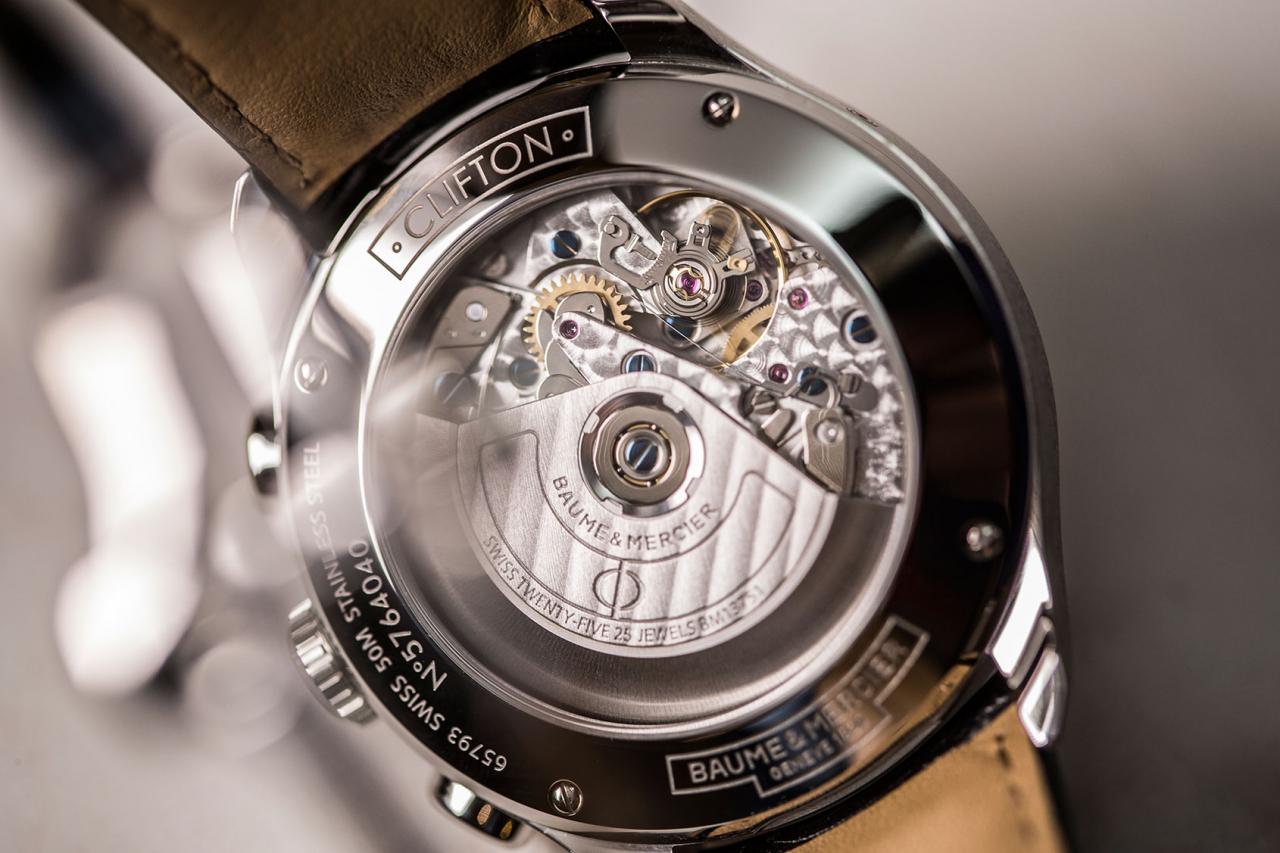 All those hands are powered by the Valjoux 7751, a complicated workhorse that pops up in a wide range of watches. Baume & Mercier have neatly finished it with circular graining on the bridges and plate, as well as snailing and Geneva stripes on the rotor. As you’d expect, operating this is a little trickier than the typical time and date movement. Most functions are controlled by the crown, with a quick-day adjustment pusher at 10. It’s worth bearing in mind that this is an annual calendar, not a perpetual, so you’re going to get fairly familiar with the quickset functions on months shorter than 31 days. 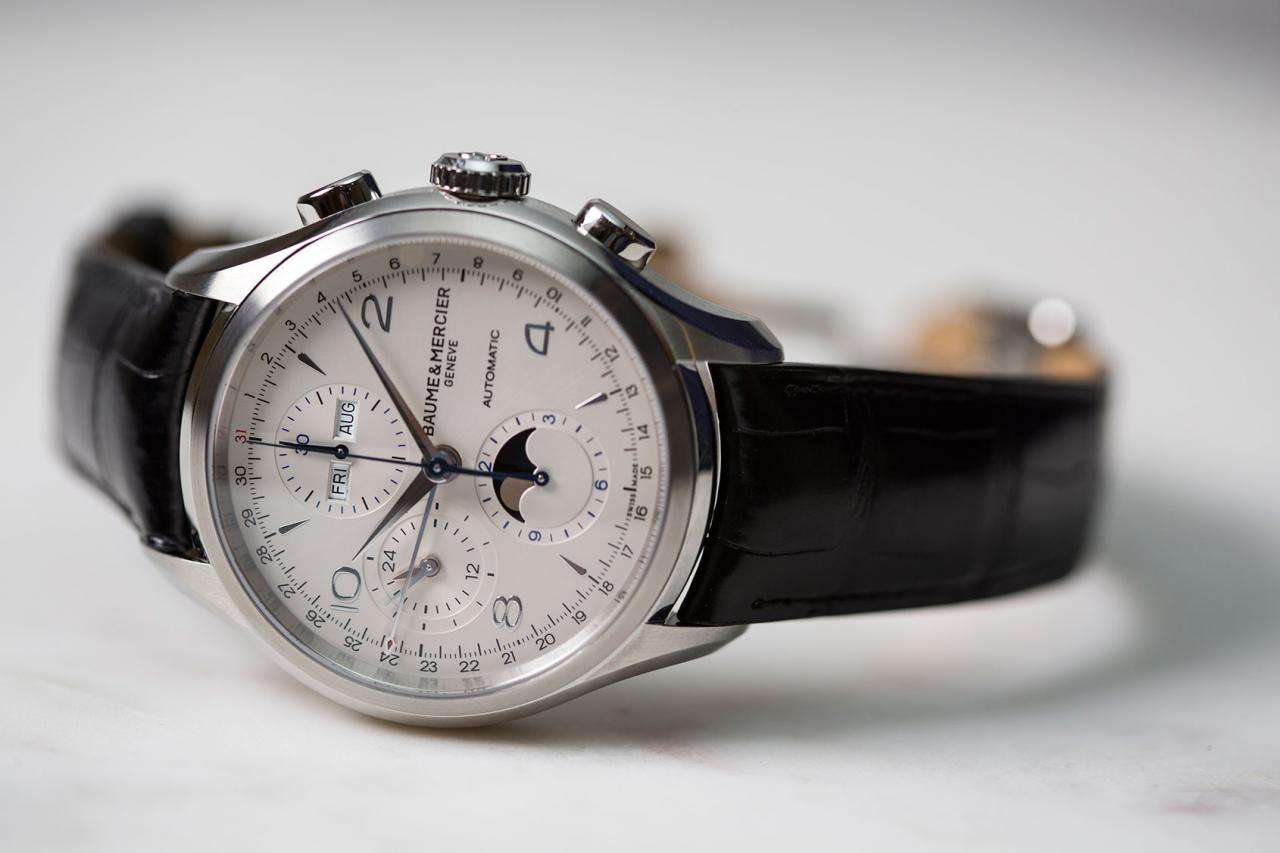 A square-scaled black alligator number on a deployant buckle, the strap is nice, but fairly unremarkable. If I owned this watch, I’d be tempted to play around with other options to amp up the vintage factor. Something like a soft taupe strap would look just right.

Baume & Mercier certainly delivers exceptional value for money with the Clifton Complete Calendar Chronograph. And in this new age of austerity, more watch for less coin is becoming increasingly appealing.