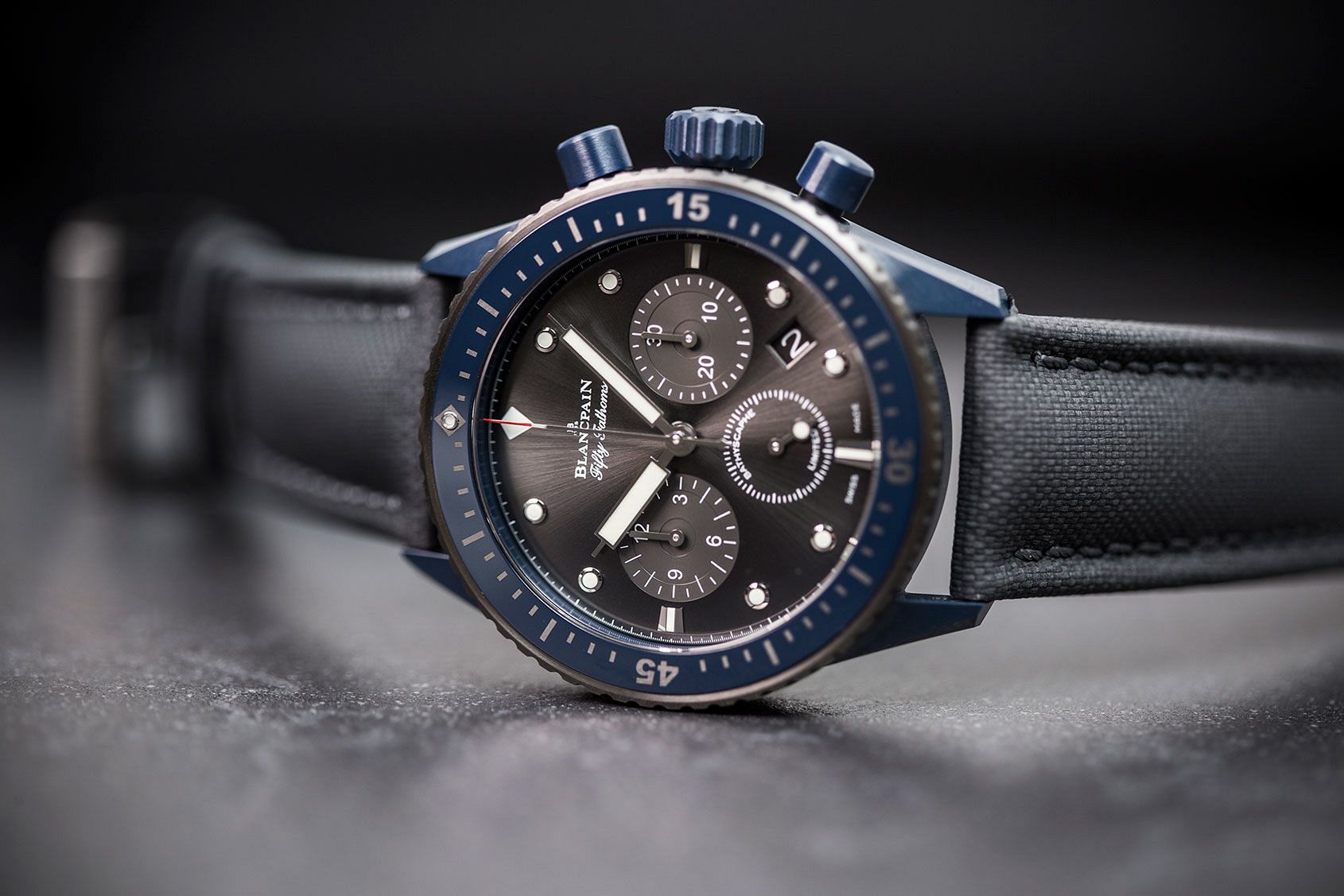 Blancpain has upped the ante on last year’s excellent Ocean Commitment watch, with a second – even bluer – limited edition. 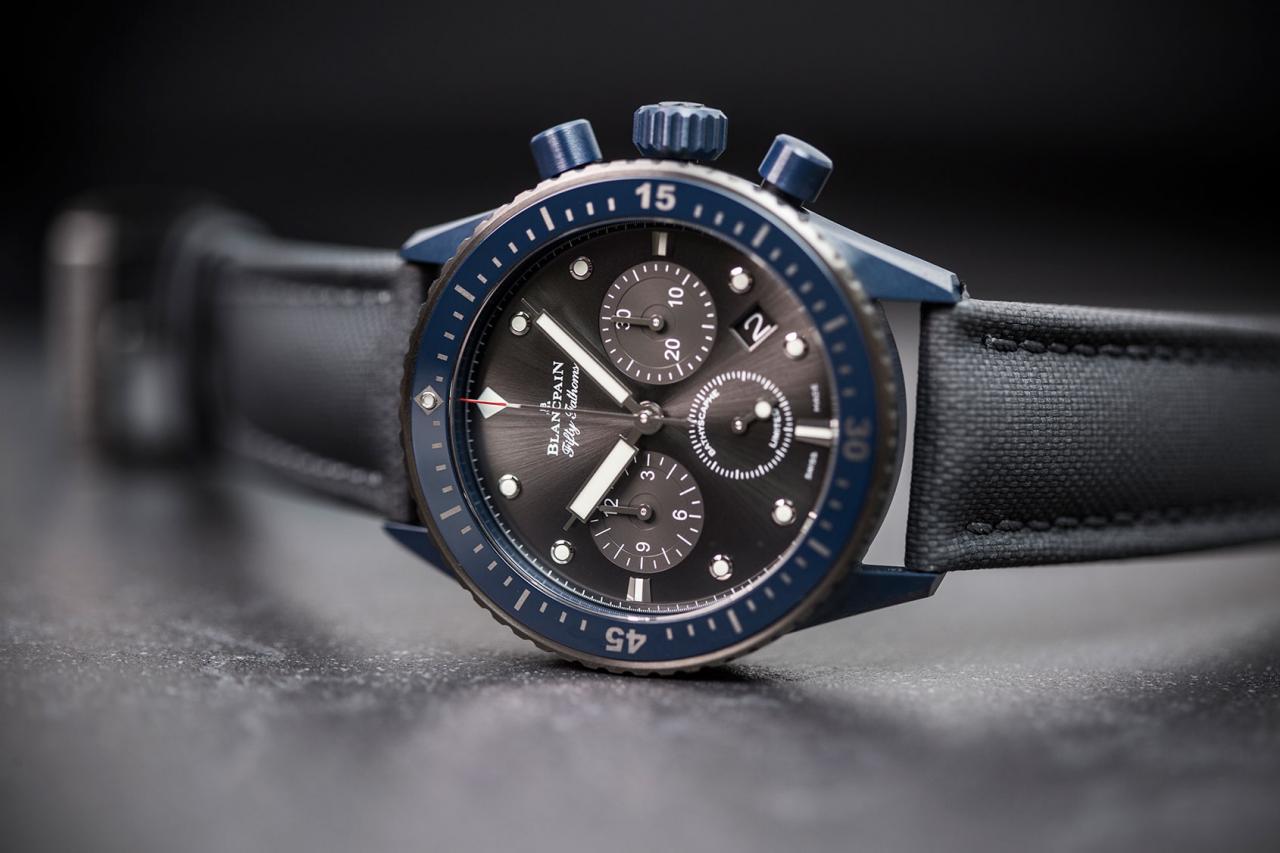 These days it’s not unique for a watch brand to have a corporate social responsibility program, usually tied in with a limited edition product. Few, however, do it with the level of integrity and (dare we say it) commitment as Blancpain’s work in marine conservation and research programs. Though the Ocean Commitment program itself is comparatively young, Blancpain has donated a total of roughly seven million Euro over the past seven years. But beyond this, the Bathyscaphe Flyback Chronograph Ocean Commitment II wears its marine allegiances on its sleeve, so to speak, thanks to a unique case. 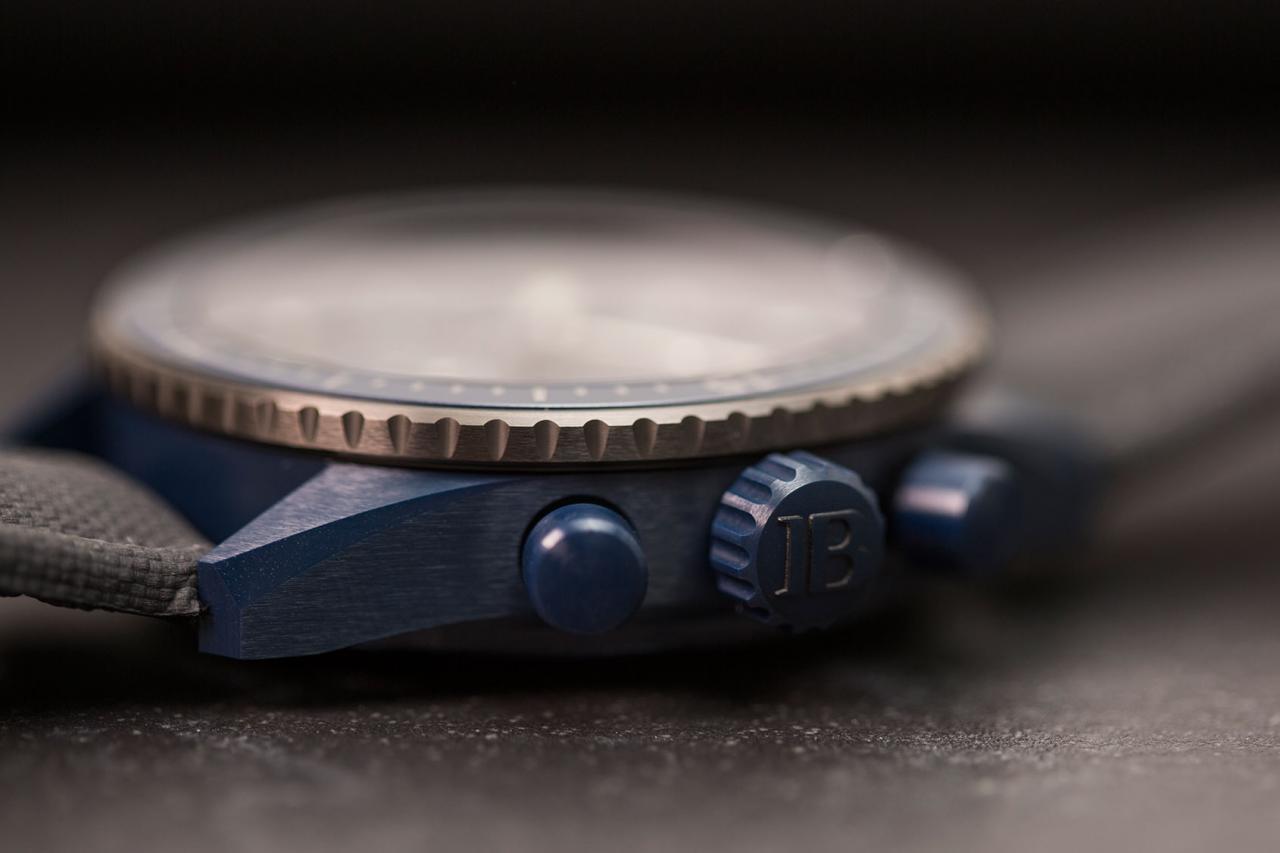 The most arresting feature of this watch is the case. On last year’s version, we swore black and (appropriately enough) blue that the case was metal rather than brushed ceramic. This year, the hi-tech nature of the material has been made abundantly clear. For the first time, Blancpain has produced an entirely blue ceramic case, made possible thanks to the addition of pigment and a binding agent into the powdered ceramic during production – a technique that makes achieving an even tone throughout quite a challenge. As if that weren’t enough, entirely different processes were used for the other case elements – the case middle, back, bezel and chapter ring insert use a compacting method, and smaller pieces like the crowns and pushers are produced using an injection method. The resulting case isn’t just super-tough, it’s also super cool. In our photography, this blueness stands out, but in natural daylight and on the wrist it’s a little more subdued and un-Smurf-like, even against the contrasting gunmetal-grey bezel. 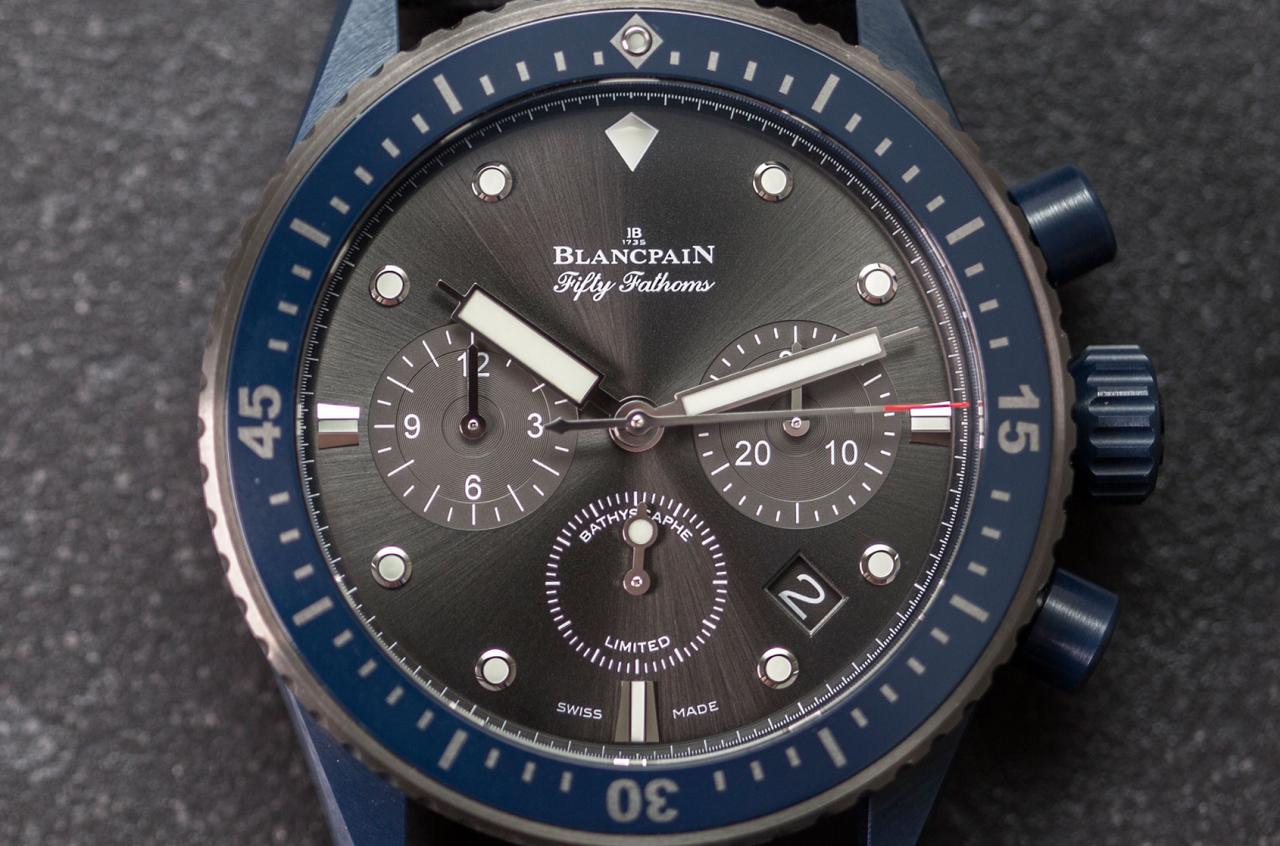 The first iteration of this watch dazzled us with its blue sunburst dial. This time around, the radiant sunburst is still present, but now it’s slate grey. It lacks the eye-catching pop of its predecessor, but I’m OK with that, as this is a watch where the case is the lead, and all the other elements are in supporting roles. That’s not to say the quality isn’t superb; the finish is rich and endlessly intriguing, and the details – the blocky bathyscaphe hands and the lollipop seconds at six – are all on point. I could have done without the date, but Blancpain has done a really good job of making it blend into the crowd. 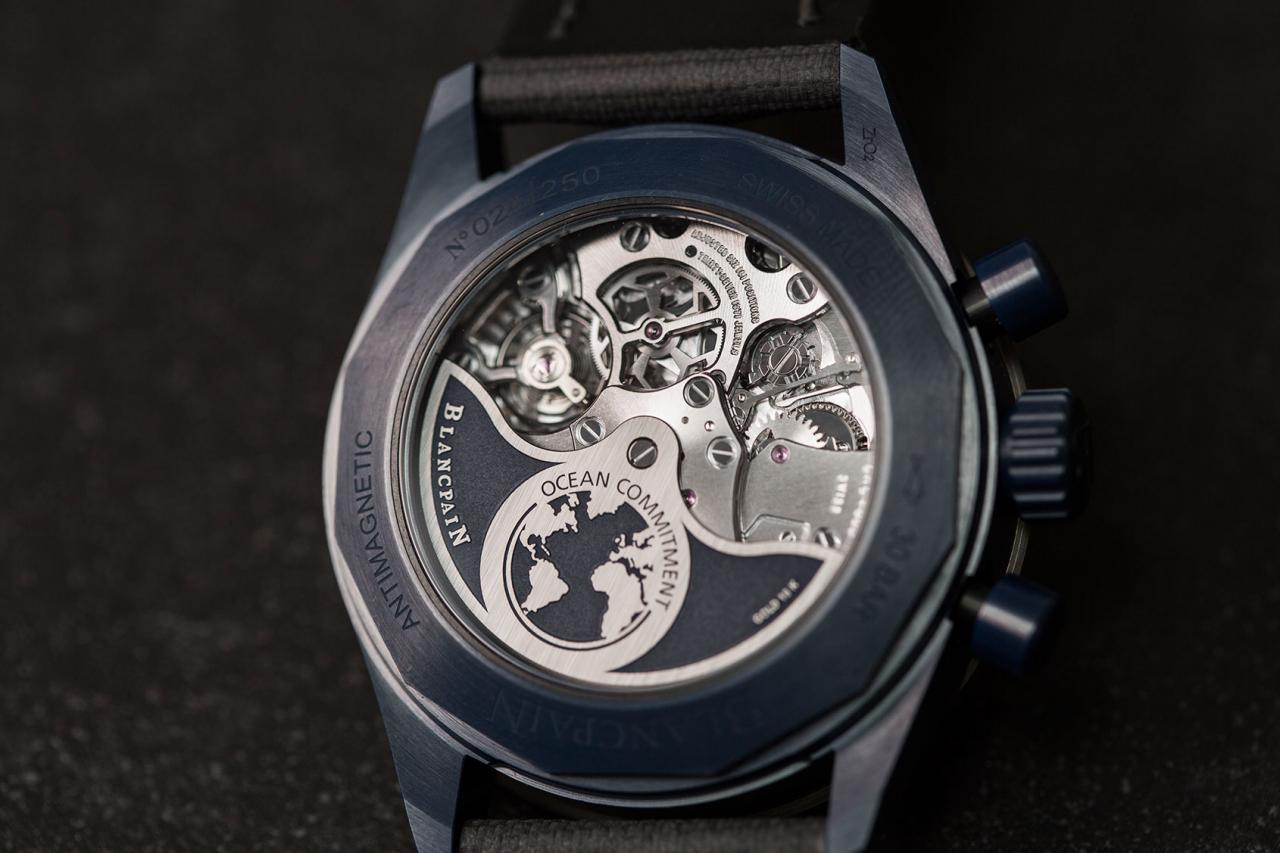 Powering the whole thing is an in-house movement, a high-beat vertical column wheel chrono that goes by the name of F385. Finishing is nice, but the real standout is the white gold rotor, with attractive Ocean Commitment branding in blue. 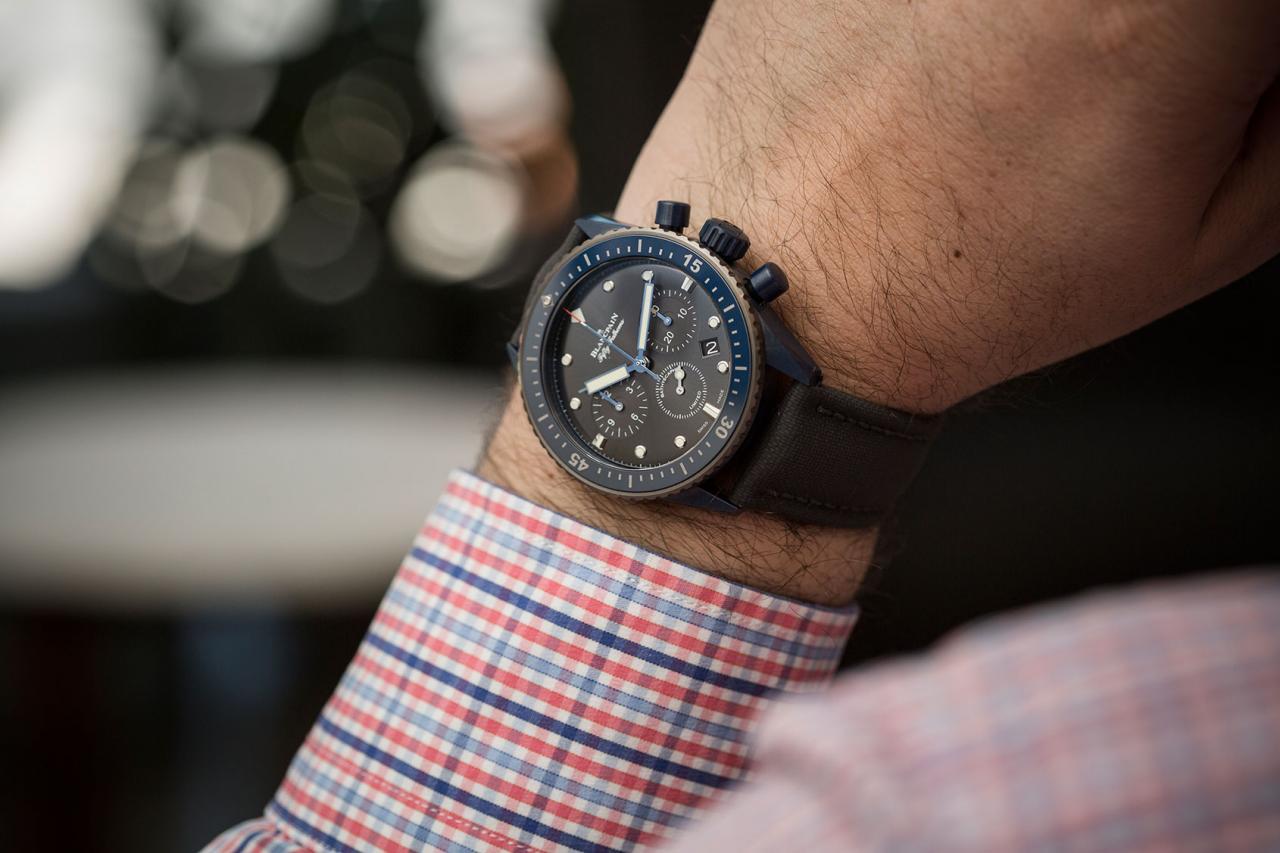 Given that the BOC II is, for all its good looks, a legitimate dive watch rated to 300m, alligator and other leathers wouldn’t have looked the part – with the possible exception of stingray – and rubber would perhaps have been too flat. So the choice of a slightly padded blue sailcloth is perfect. Hardwearing and nautical, it also adds texture to the ensemble.