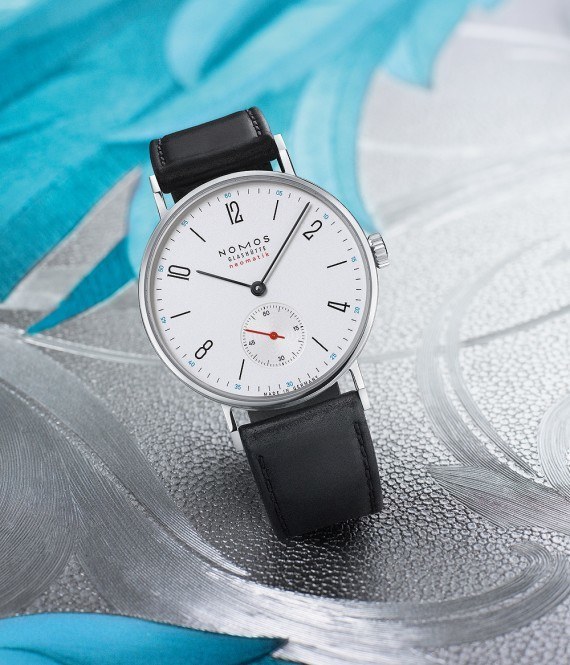 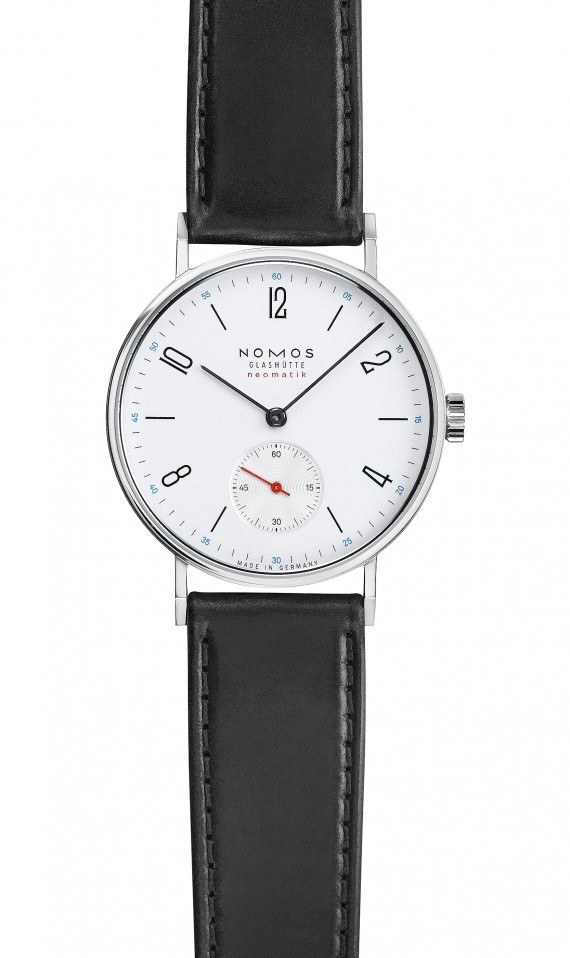 We’ve known Nomos Glashütte’s Tangente watch since its introduction in 1992, so the last thing we expected was a profound change. But now here it comes: Nomos brand watch  is giving the watch a new automatic in-house movement and adding it to its Neomatik collection.

The new version of the Nomos Tangente is striking for several reasons. The Glashütte-based manufacture worked for many years to gain independence from Swiss movement suppliers: first with individual components, then with its own escapement subassembly (which it calls the “swing system”), and now with the automatic Caliber DUW 3001, a newly developed automatic movement that ticks inside the Tangente Neomatik and other Nomos models. “DUW” stands for “Deutsche Uhrenwerke” (German watch movements) and refers to Nomos’s distinction as the maker of its own movements.

With an overall height of just 3.2 mm, Nomos’s 10th movement is only 0.3 mm thicker than its hand-wound counterpart, so it can fit inside the case of the original Tangente. Although the latest Tangente is equipped with the new automatic in-house movement, it remains within the brand’s price range of $1,500 to $6,000 for stainless-steel models: the familiar hand-wound version costs $1,900 with a steel caseback and $2,180 with a sapphire back; the automatic Tangomat sells for $3,280 and the new Tangente Neomatik is priced at $3,460.

Nomos was able to keep the price low for two reasons: extensive research and calculations, partly in collaboration with the Technical University of Dresden, allowed the new movement to be serially manufactured, and the company introduced ultramodern manufacturing and assembly techniques, which made it possible to increase production volume. These goals were presented at the outset to the engineering team, so details relating to fabrication, assembly and servicing influenced the developmental work from the very beginning. One of the results: Caliber DUW 3001 is assembled in only three steps, compared to the five needed for previous Nomos calibers. “Now that we’ve fully mastered building movements, we can question everything,” says chief design engineer Mirko Heyne.

Theodor Prenzel, the design engineer behind the DUW 3001, says, “That’s why nothing other than a totally new approach was even considered for our new caliber. We changed many details in the classical construction and ultimately arrived at a totally new movement.”

The movement developers first turned their attention to the gear train. Although its construction had already been recalculated in collaboration with the Technical University of Dresden in 2009, the technicians subjected it to renewed scrutiny and customized it expressly for the new caliber. By altering the number, arrangement and angles of the teeth, the specialists were able to boost the gear train’s efficiency by 10 percent to an impressive 94.2 percent.

That’s an enormous improvement in itself, but it’s all the more impressive when you consider that the usual tolerances had to be halved for this ultra-slim movement, which provides only 1 mm of height between the base plate and the three-quarter plate to accommodate the rotating components.

According to Glashütte tradition, watchmakers try to put as many of the watch’s mechanisms as possible under the three-quarter plate. Nomos took this      effort one step farther. Glashütte’s characteristically spacious bridge doesn’t cover just the gear train: the ratchet wheel, which is now only half as tall as its predecessor, also disappears under the three-quarter plate, as does the double click wheel for the automatic winding mechanism. Strictly speaking, the double click wheel is an entire subassembly, which transforms the bidirectional motions of the rotor into unidirectional action to tighten the mainspring. This extremely efficient mechanism works with a reverse angle of merely 10 degrees. For comparison, the corresponding angle is 27 degrees in the ETA 2824 and 42 degrees in Rolex Caliber 3135. Reducing the angle to 10 degrees means that overall, less power is needed to wind the DUW 3001.

Details on the new Tangente’s dial assure that this watch looks like a Neomatik. Long, slender, black-anodized hands point to index strokes for the odd-numbered hours and to Arabic numerals for the even-numbered ones, except at 6, where the numeral is replaced by a sub-dial, decorated with concentric circles, for the seconds. An attention-getting red hand sweeps around this little disk, which is marked with three different types of index strokes and a quartet of Arabic numerals. The same red color is used on the dial for the name of this new line of watches: “neomatik” is written in lower case, spelled with a final “k” and centered below the names “NOMOS” and “Glashütte,” located between the 11 and the 1. The numerals for the 5-minute markings along the dial’s edge are bright blue: we’re just sorry that the cyan paint doesn’t glow in the dark. 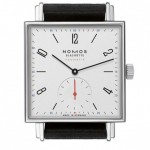 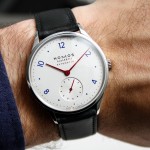