We’ve covered a number of standout mechanical watches, in various categories, from this year’s Baselworld watch fair. As in most years, there were also a fair amount of interesting timepieces on hand with quartz or electronic movements. Whether it was for their innovative functionality, groundbreaking technology, or eye-catching design, here are seven that caught our eye.

The Citizen Eco-Drive One, which marks the 40th anniversary of the launch of the Japanese brand’s proprietary Eco-Drive quartz technology, is the world’s thinnest light-powered analog watch, with a case just 2.98 mm thick and an Eco-Drive movement just 1.00 mm thick. To get the requisite thinness, Citizen says it redesigned almost every part of the movement, which still manages an accuracy of +/-15 seconds per month. Citizen also reduced the energy consumption of the movement, enabling the watch to run for 10 months on a single full charge.

To create such a thin case, Citizen said it had to turn to new materials that are both thin and strong. It showcases these materials on an 800-piece limited-edition collection of Eco-Drive One. The case, which has a diameter of 38.15 mm, is made of cermet, a composite of ceramic and metallic materials; the bezel is made from a cemented carbide, which has superior hardness and is resistant to corrosion and oxidation. The suggested retail price of the limited edition is $6,000; click here for more, including details and prices on the non-limited versions of the watch. 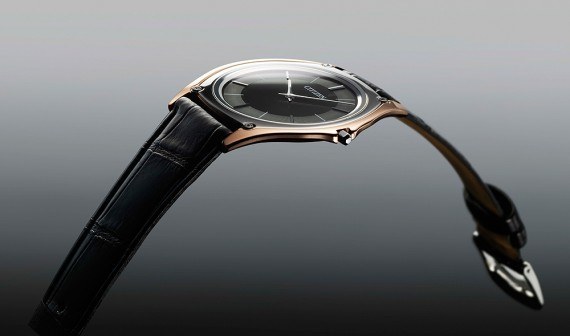 The Movado Heritage Series, launched this year, consists of updated, quartz-powered renditions of watches from Movado’s past. One of the first models is based on the Calendoplan from 1950. The watch had a slim case and, unlike many other calendar watches of the time, just one calendar indication, for the date, at 3 o’clock. The new version is 40 mm in diameter and available with either a gold-plated steel case ($650) or a non-plated steel one ($595). The non-plated-case model comes with either a white or black dial. There is also a chronograph version of the Calendoplan ($850 and $795 for the plated and non-plated versions, respectively). 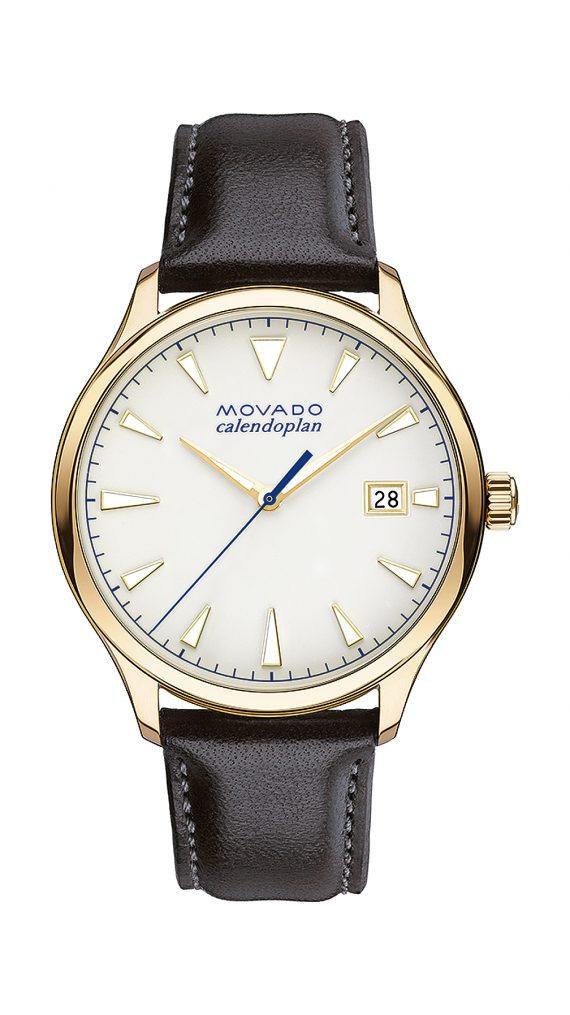 New York-based Bulova has introduced what it calls the world’s first curved chronograph watch, the Bulova CURV. In an engineering feat, Bulova took one of its proprietary ultra-high- frequency quartz Precisionist chronograph movements and bent it. Then it fitted the movement into an ergonomically designed, slim, curved case. The CURV collection consists of sports and dress models priced from $599 to $899. The leader model, shown here, has a see-through dial, a titanium case ($899; it also comes in steel at $799), a transparent back (rare for a quartz watch), and a black rubber strap. The CURV’s movement has a frequency of 262 kilo- hertz, which is eight times greater than a standard quartz watch movement. At that rate, the watch’s seconds hand does not skip from second to second as on a standard quartz watch, but moves in a continuous sweep around the dial, in the manner of a mechanical-watch hand.

The Luminox F-22 Raptor Chronograph is the latest watch in Luminox’s F-22 9200 series, which the company created as a tribute to Lockheed Martin’s newest Stealth Fighter. The watch has a 44-mm, ultra-light titanium case that is 13.5 mm thick. It is water resistant to 200 meters. The watch incorporates design cues from the jet. It has a flight-inspired slide rule. The two center links of the bracelet mimic the angles of the wings of the F-22. The shape of the crown is modeled after the tail cone. The dial was inspired by the instrument panel of the F-22. The caseback features an engraving of the F-22 Raptor. The watch is Swiss-made and powered by a 13-jewel Ronda quartz movement. The hour markers and hour and minutes hands contain tritium tubes that provide a constant glow in any light condition for up to 25 years. The Raptor Chronograph comes in four executions. Prices: $1,100 with a black or brown leather strap; $1,050 with a NATO strap; and $1,300 with a titanium bracelet. 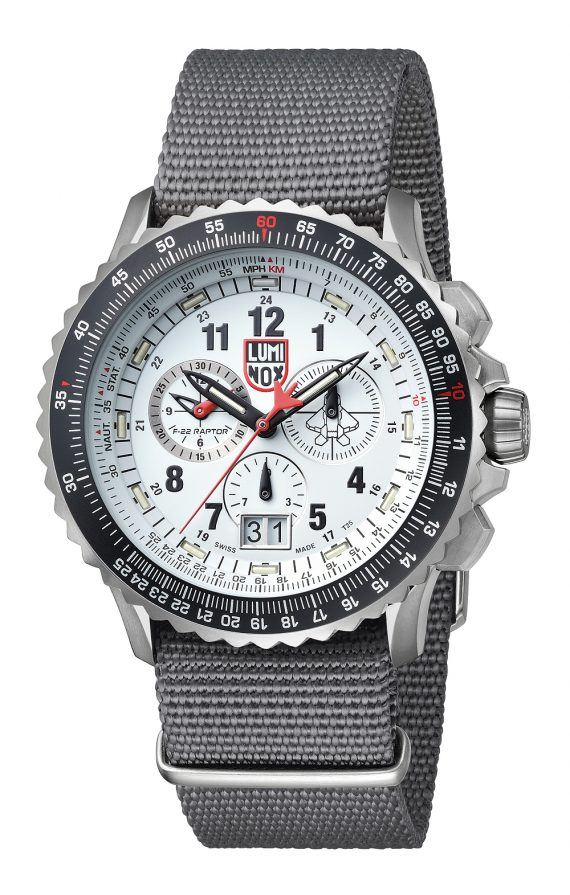 Casio’s new connected watches include the Edifice EQB-600D-1AZ world timer, which pairs with a smartphone via Bluetooth to access the correct time in its current location and in more than 300 cities worldwide. The Bluetooth link is activated by pushing a button at 8 o’clock. A second time zone is indicated by a hand above a 3-D globe that rotates once a day. A day-night indicator surrounds the globe. The time in that time zone is indicated on a subdial between 7 and 8 o’clock. The wearer can swap home time and the specified second time zone by pushing a button. The watch also has a phone-finder feature: by connecting the watch with the phone, the wearer can cause the phone to emit a beep. The watch is solar powered; once fully charged it will run for about seven months without further exposure to light. The case is water-resistant to 100 meters. Price: $400. 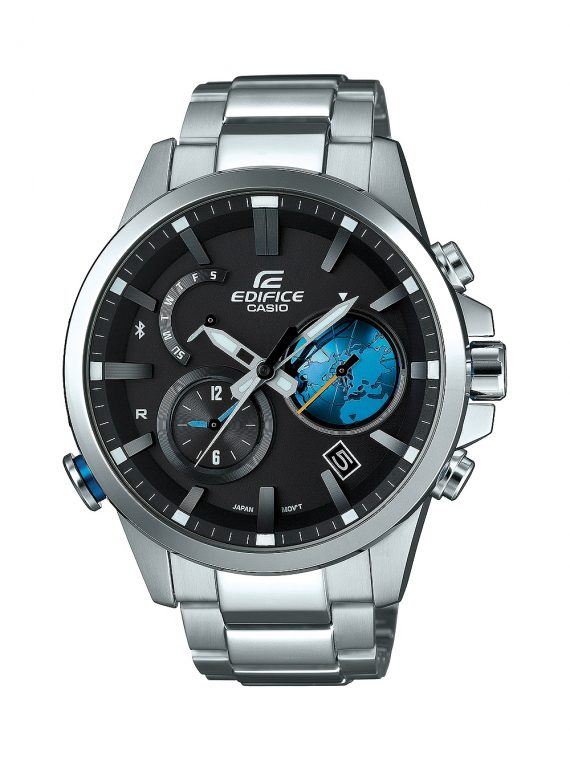 The latest from the avant-garde California watch company Devon is a special limited-edition version of the Devon Tread 2 watch called Motown Nights. It’s a tribute to Detroit in the 1960s and ’70s, says Devon founder and CEO Scott Devon. He grew up in Detroit during that era and took design cues for his watches and customized motorcycles from that time and place.

The Tread 2 displays time using a patented system of time belts that Devon developed. Hours are displayed on the horizontal belt and minutes on the vertical belt. A seconds display and a chronograph function can be actuated through the watch’s unique articulating crown lever and push button. All Tread movements use precision-cut ruby bearings for higher durability and lower maintenance. All Devon timepieces are developed and manufactured in the U.S. Devon will produce 50 Tread 2 Motown Nights. The price is $15,000. 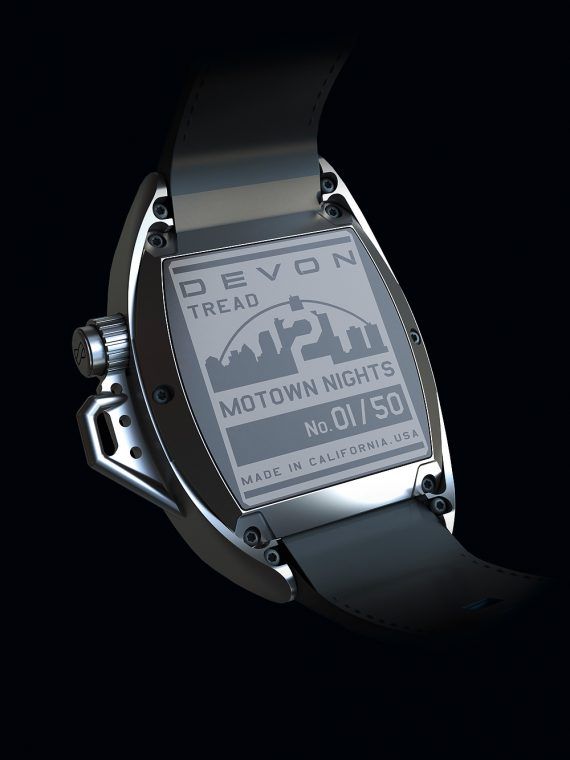 The Shinola Canfield collection features round cases with coin edges and wire lugs. There are chronograph and non-chronograph versions of both the women’s 38-mm models and the men’s 43-mm ones. Shown here is the men’s chrono with alligator strap ($1,050). It has a sapphire crystal and is water resistant to 50 meters. All Shinola watches have quartz movements assembled in Detroit from movement kits supplied by Ronda. 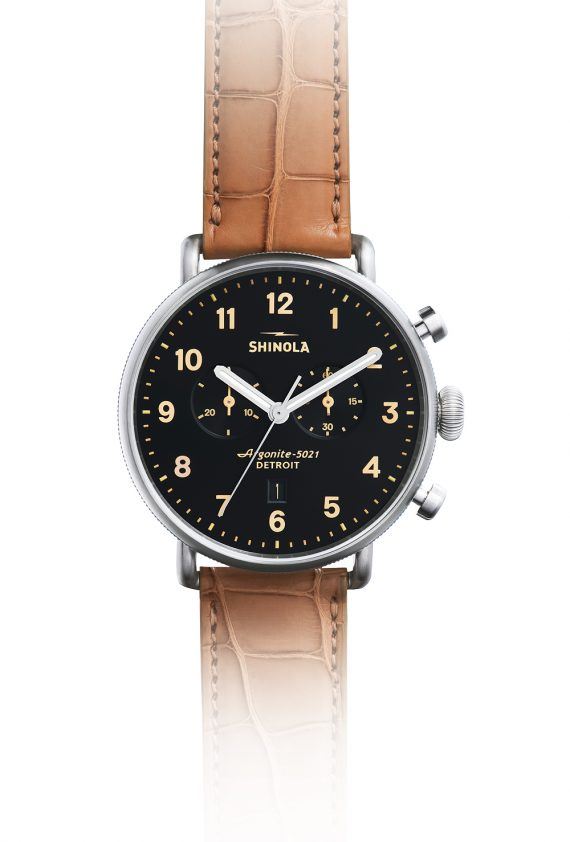