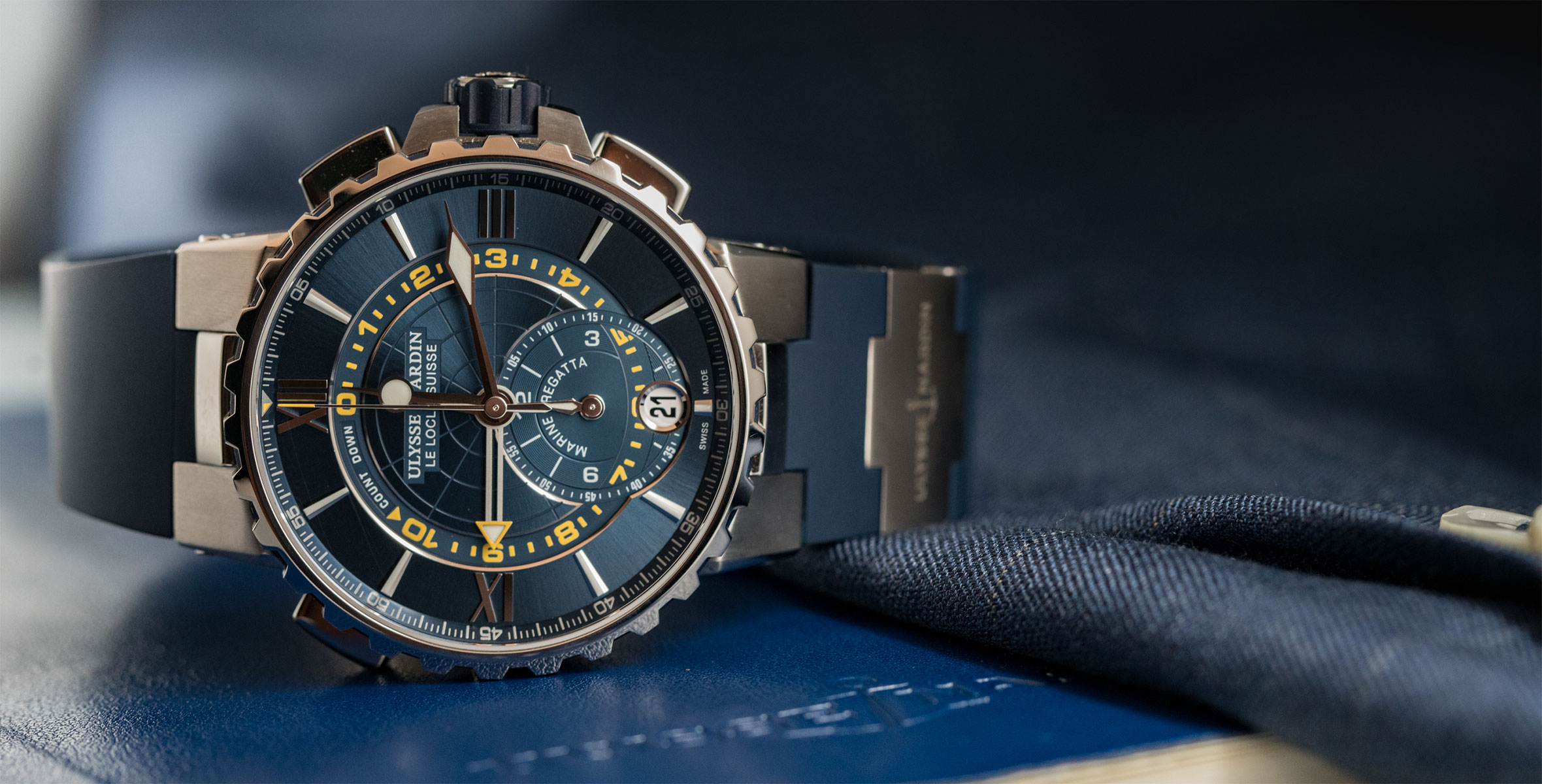 Ulysse Nardin made their name way back in 1846 making marine chronometres – highly accurate ship’s clocks that were an essential navigational tool in the times before radio and GPS. These days the Le Locle-based brand still makes chronometre-style timepeices, but as a celebration of heritage rather than a practical tool. This isn’t to say that Ulysse Nardin has given up on the sea; far from it, as their new Marine Regatta demonstrates. 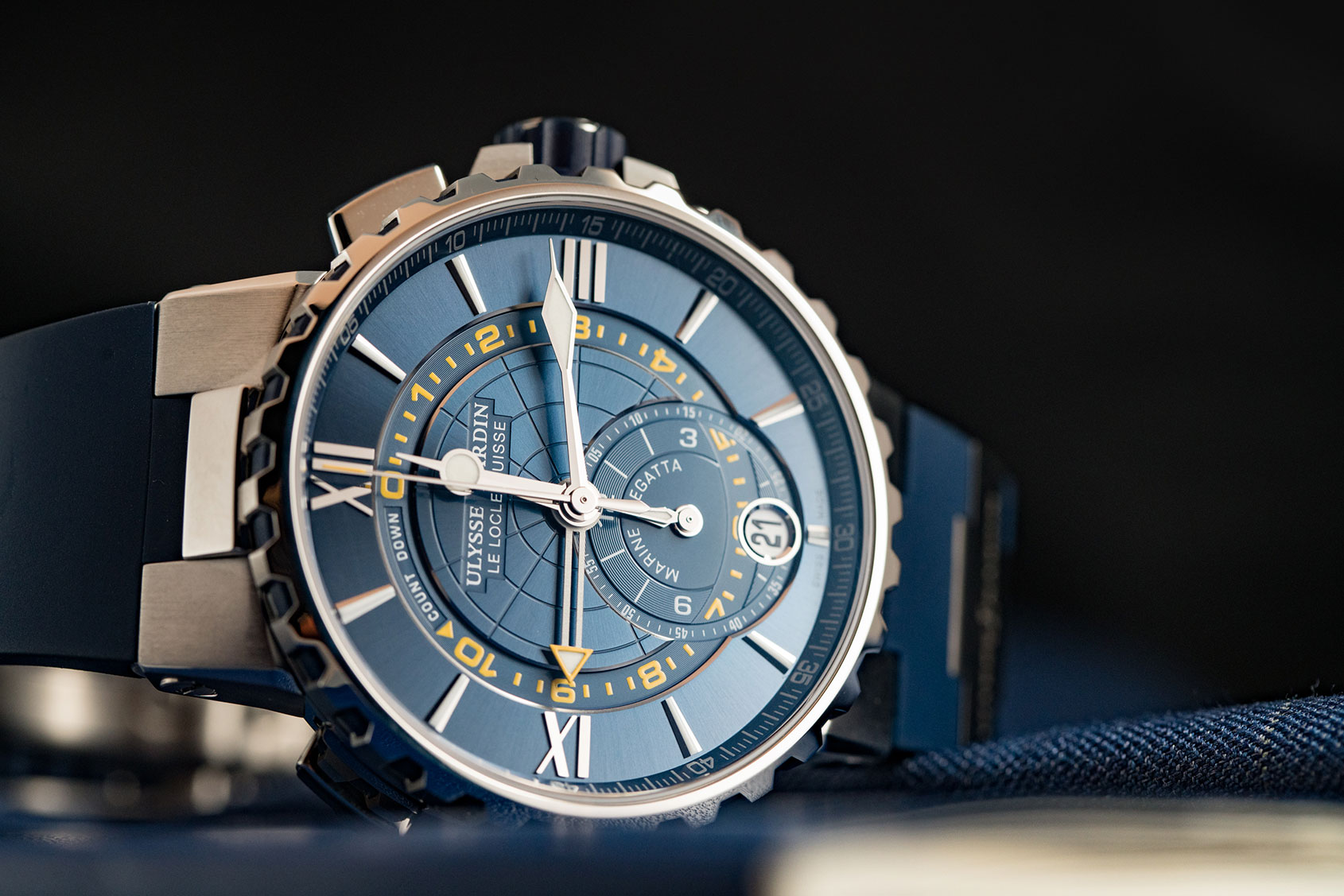 Developed with the support and input of Artemis Racing – the Swedish sailing team the brand sponsors – the Marine Regatta is, as the name suggests, a regatta timer, one of the more specialised complications in horology. For those of you not familiar with competitive sailing, yachts don’t begin from a standing start, but rather jockey for position and aim to cross the starting line as soon as the starting gun goes off (boats are penalised for crossing early). 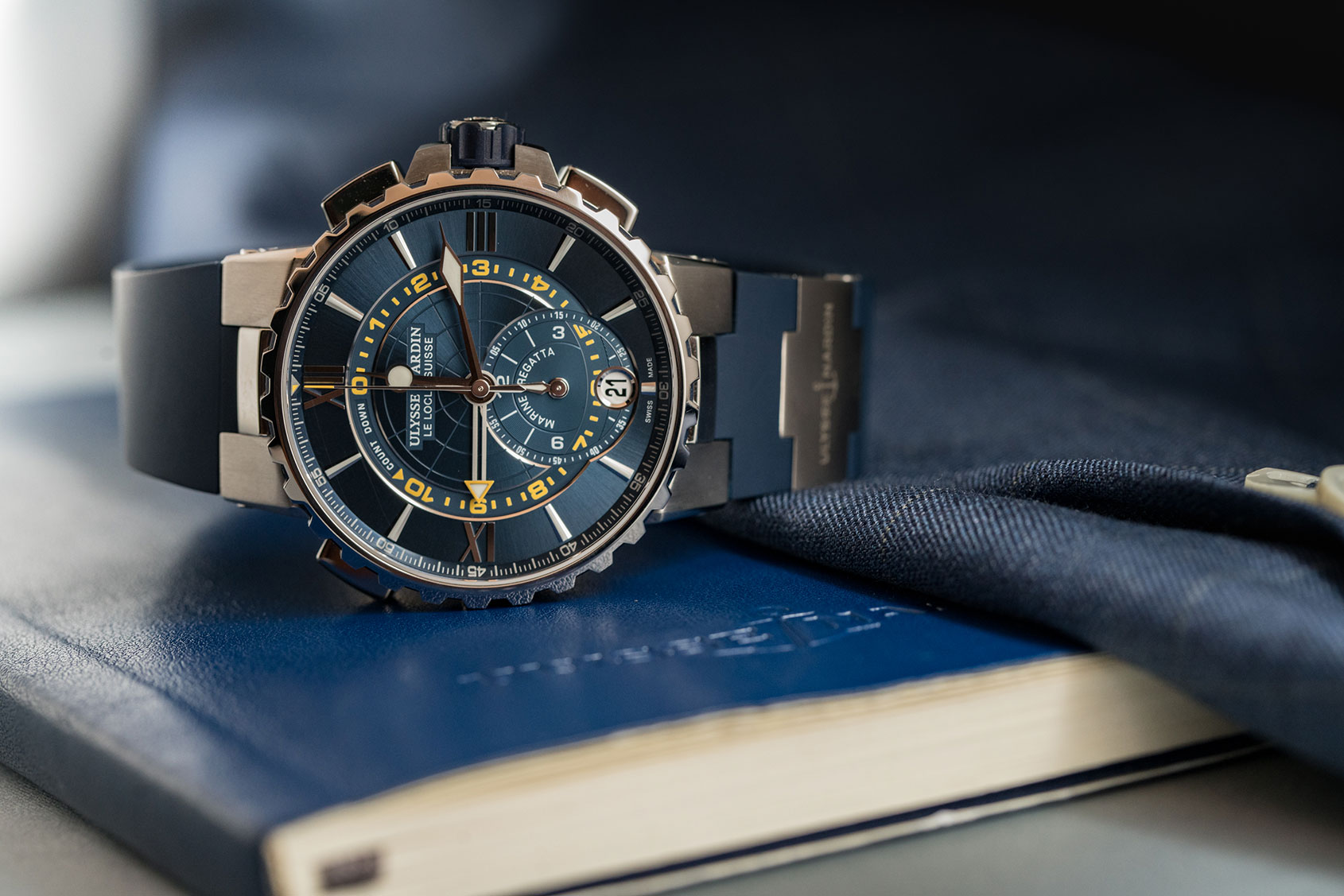 So in the minutes before the race starts there’s a signal that lets skippers know that a countdown period (typically five to 10 minutes) has begun, and that they should head towards the starting line. Which is where the regatta timer comes in. In the simplest terms a regatta timer is a countdown timer that allows the skipper to see, at a glance, how long until the race starts. Ulysse Nardin’s version is adjustable, allowing the countdown period to be set anywhere between one and 10 minutes. This period is adjusted by the pusher at 10. When the regatta timer is activated, the central seconds hand actually runs backwards, along with the central (yellow) timing hand, allowing for an incredibly easy-to-read countdown. The real party trick happens when the countdown hits zero – the seconds hand instantly starts moving in the opposite direction, measuring elapsed time up to 12 hours, just like a regular chronograph. To see what I mean in more visual terms, check out the video below.

This new movement, developed by UN, is a genuinely impressive innovation, elegant in its apparent simplicity. It adds great functionality for wearers outside the exceptionally rarefied market of competitive sailors. In addition to the complication the automatic Caliber UN-155 has three days of power reserve and a silicium escapement. 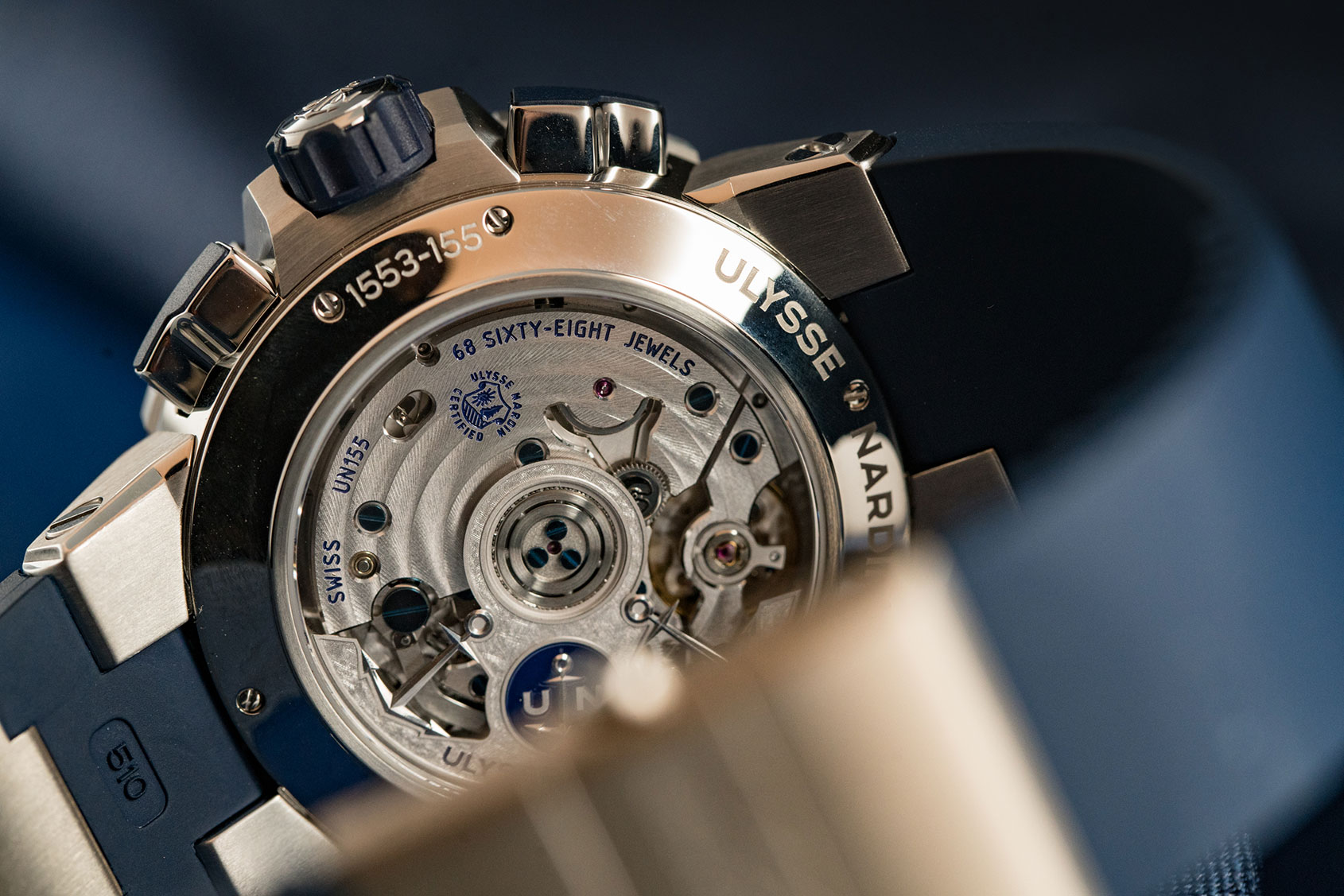 Beyond the technical features of the watch there’s a lot to like about the Marine Regatta. It’s big and sporty at 44mm, with an aggressively styled bezel, pushers and integrated rubber bracelet that’s very much on brand. The crown is covered with grippy rubber. It’s easy to operate all the functions, and rated to 100m, which is appropriate for a non-diving sports watch. I suspect that Artemis Racing’s input and field testing would have been invaluable here. The dial softens the picture a little, with lots of little details and a quite unusual handset. There’s a white version, but the visually arresting sunburst blue is my pick – it’s in keeping with the maritime theme, and offers greater contrast and legibility for the essential countdown features. 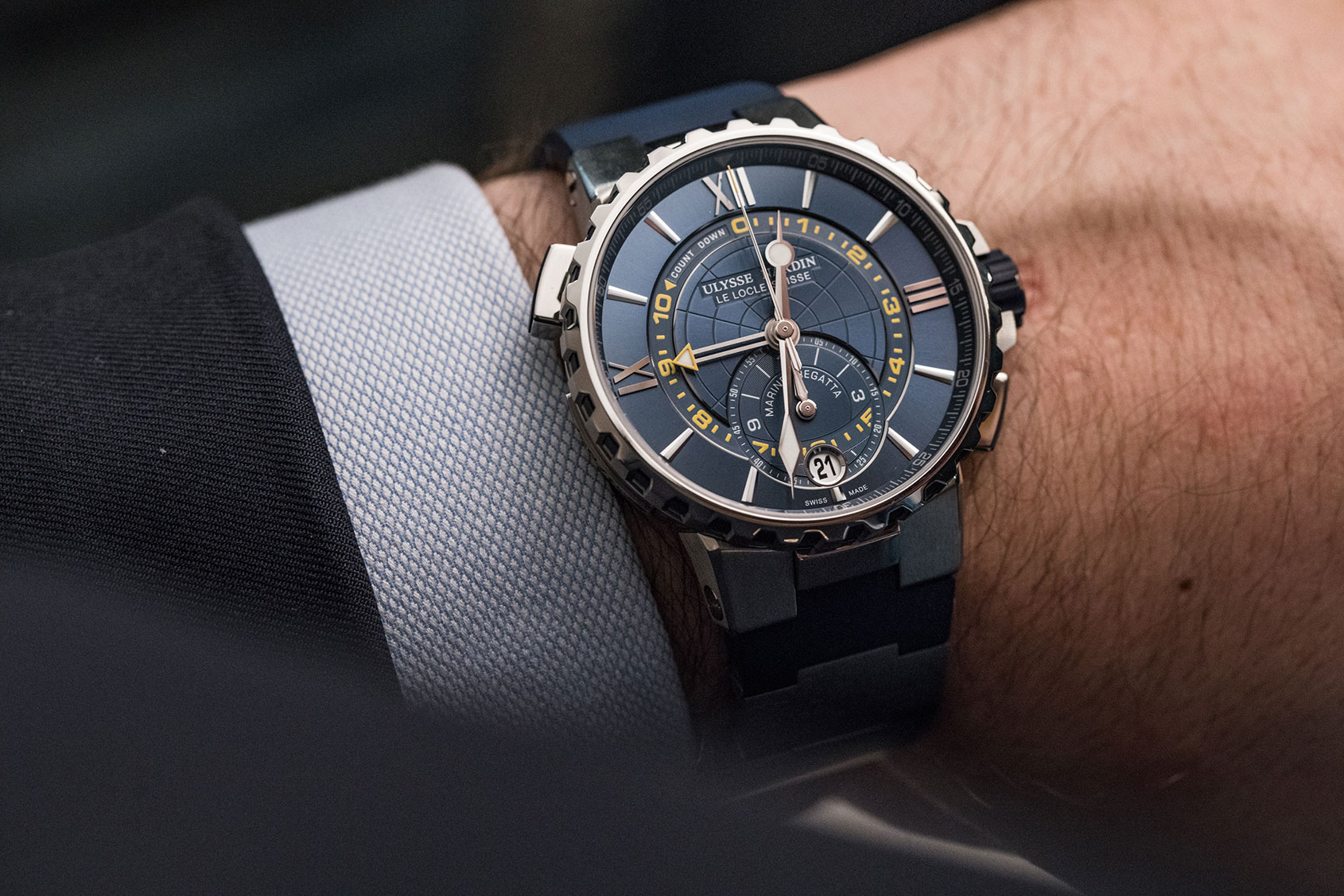 Due to the very niche nature of its complication, the Marine Regatta won’t be for everyone, but it’s one of the most technically impressive and genuinely useful implementations I’ve seen, and one of the real surprises of 2017. And you can bet that Ulysse Nardin are hoping that their clever new watch will help Artemis Racing sail to victory in the upcoming America’s Cup.