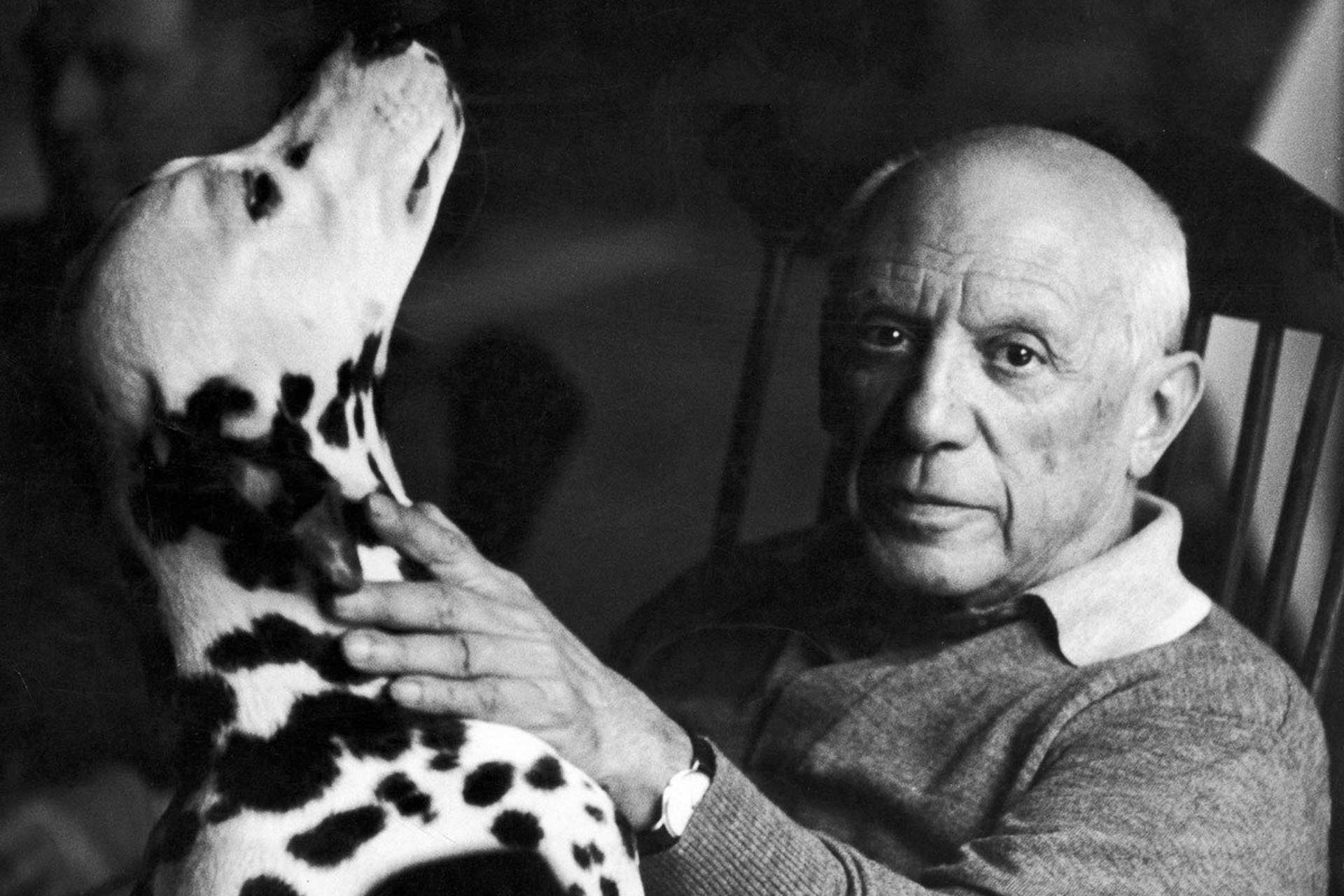 “That fucking Picasso,” Jackson Pollock wrote. “He’s done everything.” When the father of modern art died aged 91 in 1973, he was the most prolific artist in history, leaving 13,500 paintings, 100,000 prints and engravings and 34,000 illustrations, not to mention sculpture and ceramics. In 2015 Christie’s broke the world record when it sold Pablo Picasso’s Women of Algiers in New York for $179 million. Those of a cynical bent might raise an eyebrow that the international art collector’s market has anointed Picasso as its most precious commodity. As an investment Picasso is arguably a safer bet than gold bullion, oil and diamonds. 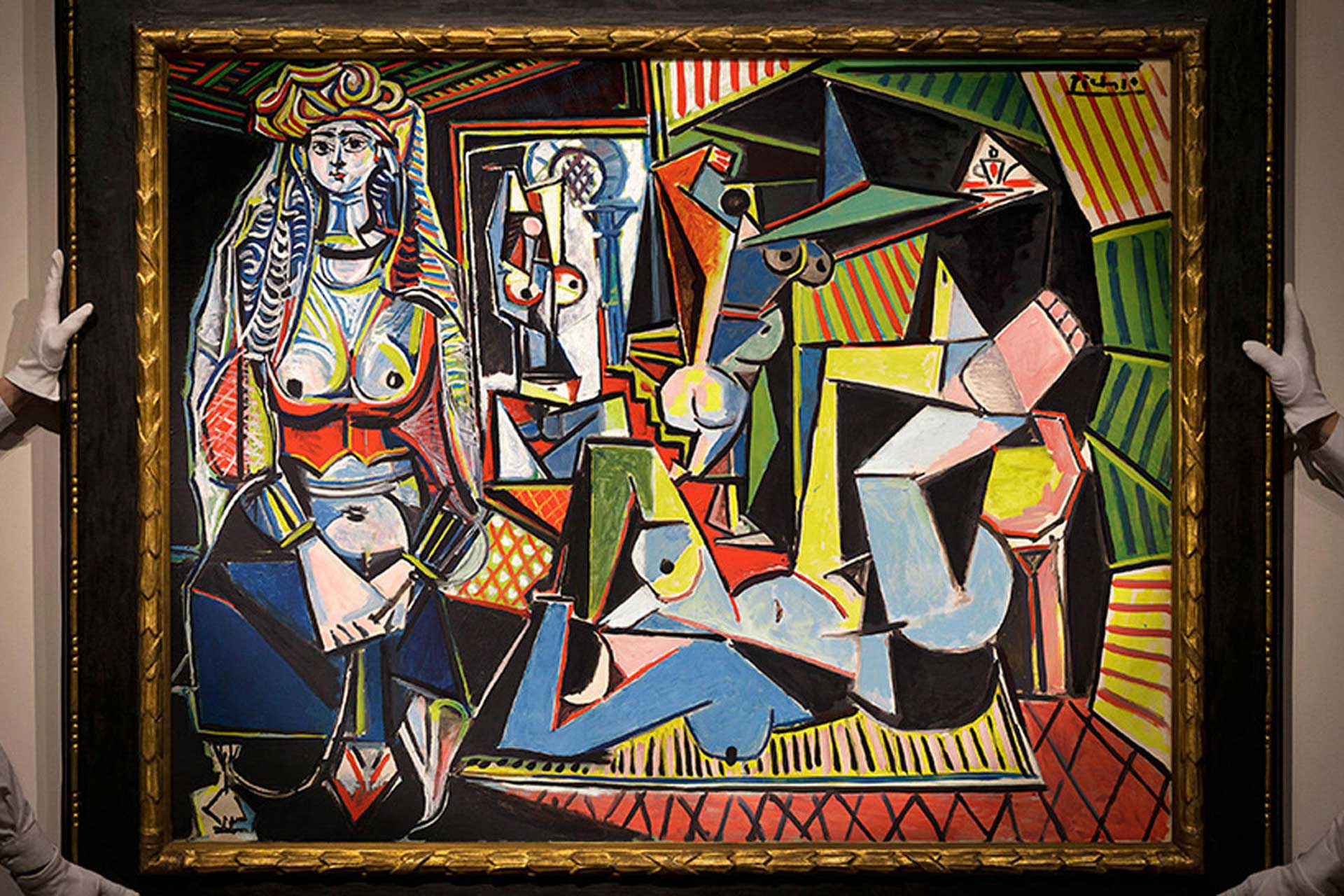 When a previously un-catalogued cache of Picasso’s works emerged in 2010 at Paris auction house Blanchet et Associés tremors were felt throughout the art market. The collection was from the estate of Picasso’s driver Maurice Bressneu, nicknamed Teddy, who had worked for the Spanish artist from 1967 to 1973. Bressneu died in 1991 and his heirs claimed to have found 271 works in the driver’s garage that were “gifts from the artist”.

The Pablo Picasso Estate halted the sale, presumably at the prompting of his surviving heirs – daughters Paloma and Maya and son Claude. For keen-eyed watch collectors, the Picasso catalogue offered a brief glimpse of two treasures that have once again vanished from the public domain. Though neither watch is visibly signed, the numerals around the circular enamel dial spell out the twelve letters of Pablo Picasso’s name. The yellow-gold case is fitted with a tan crocodile strap and the stainless-steel with black leather. Both watches are “well loved” and we know from numerous studio photographs in the latter years of his life that Picasso did not remove his watch when painting, making these two watches as priceless for art collectors as bounty hunters of watches with provenance.

Picasso’s yellow-gold watch has black, hand-painted letters in Granjon font developed in 1928. The stainless-steel watch’s letters are a precursor of the extended sans serif Gotham font. Neither fonts nor the inscription of “19 JEWELS” on Picassso’s gold watch give clues to their date of birth or brand history. 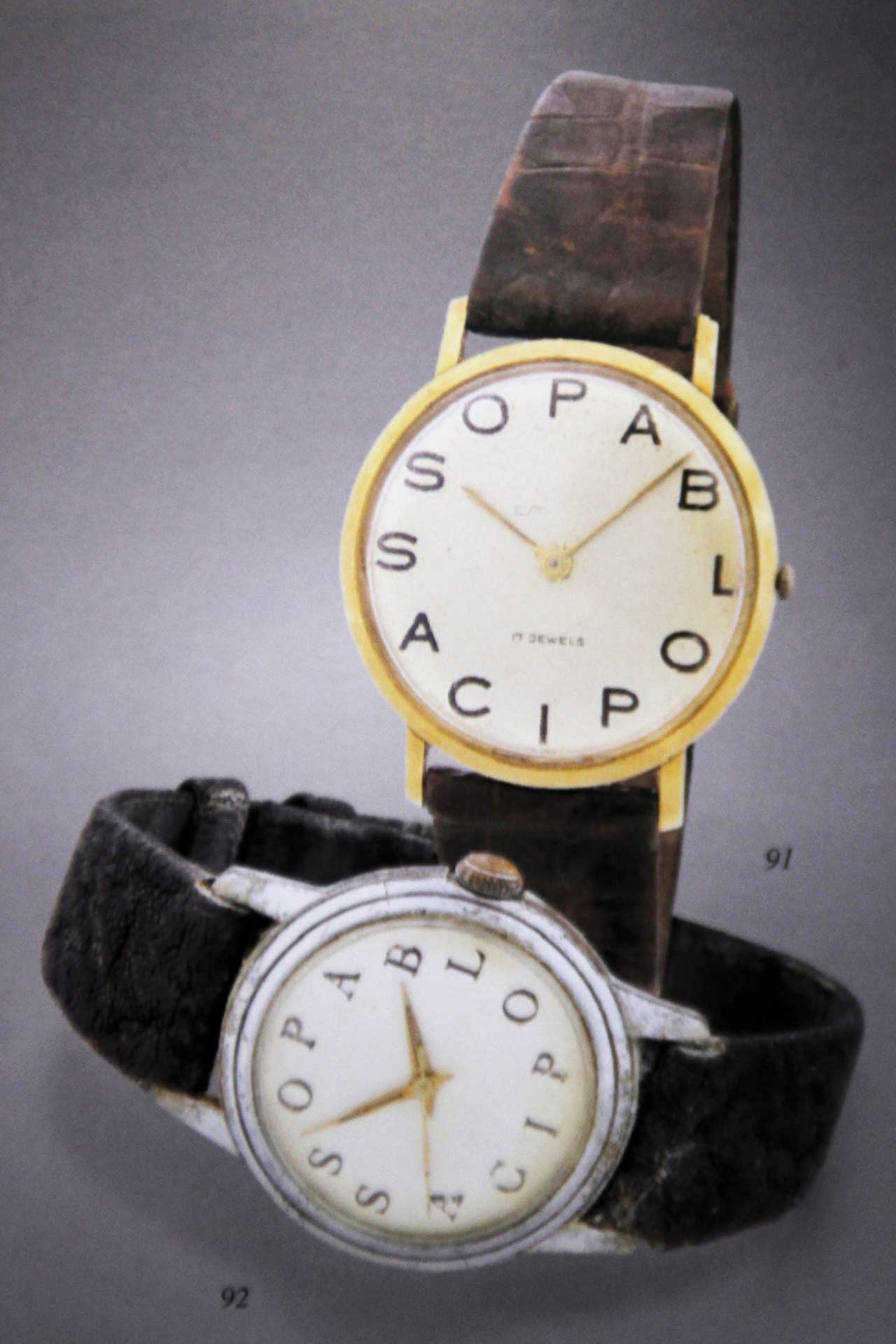 We do, however, know that Picasso had a fine collection of wristwatches. In 1954, celebrated photographer Yousuf Karsh captured the artist wearing what has been identified as a Jaeger-LeCoultre Triple Date Moonphase. He also wore a stainless steel Rolex GMT-Master in a famous 1960 portrait by Eddy Novarro, which showed the artist sporting a Native American headdress given to him by Western movie hero, Gary Cooper.

It is curious that the painter of Demoiselles d’Avignon (1907) and the anti-war masterpiece Guernica (1937) – a protest against the horrors of the Spanish Civil War – had a rather sybaritic taste for the finer things in life. Though he was a card-carrying member of the Communist party, Picasso enjoyed playing with the trappings of the bourgeoisie. In 1919, when he was in London painting sets and backcloths for Serge Diaghilev’s Ballets Russes production of The Three-Cornered Hat, he and ballerina wife Olga Khoklova stayed at the Savoy. Picasso persuaded Bloomsbury Group critic Clive Bell to take him to Savile Row to be measured for an Anderson & Sheppard suit and to James Lock & Co. on St James’s Street to buy a black bowler hat.

Though Picasso was acclaimed in the art world after Demoiselles, when his erstwhile mentor Henri Matisse said of him, “he is a bandit lurking in ambush”, the artist earned commercial as well as critical success when he and Georges Braque unleashed Cubism on the Parisian art world in 1907. Pablo Picasso was that rare artist who was wealthy in his own lifetime rather than posthumously. The Jaeger-LeCoultre, Rolex and personally monogrammed watches are merely the pieces in his collection for which there is photographic evidence. None have appeared on the secondary market, making a watch with proven lineage to Pablo the Great a collector’s dream. 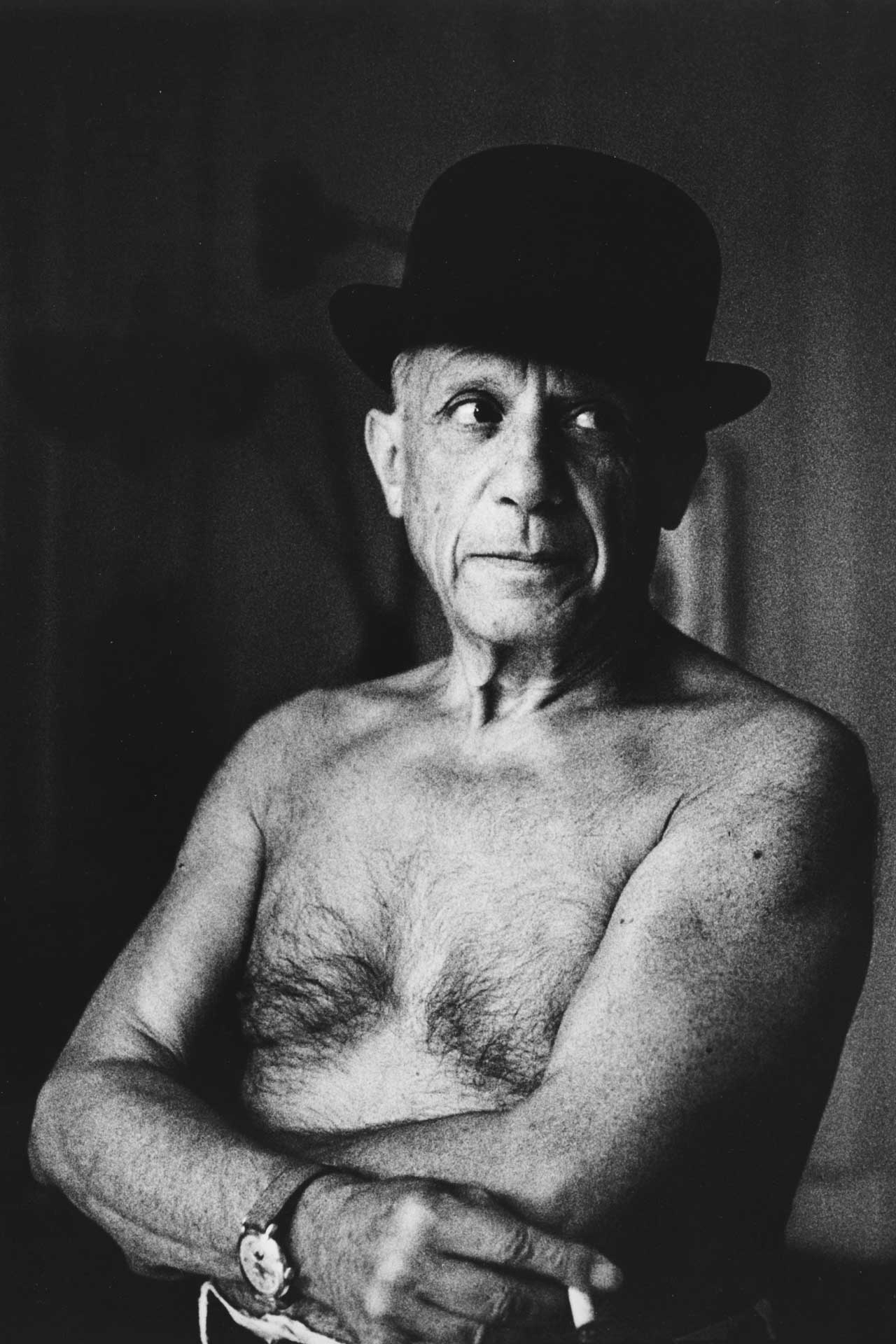 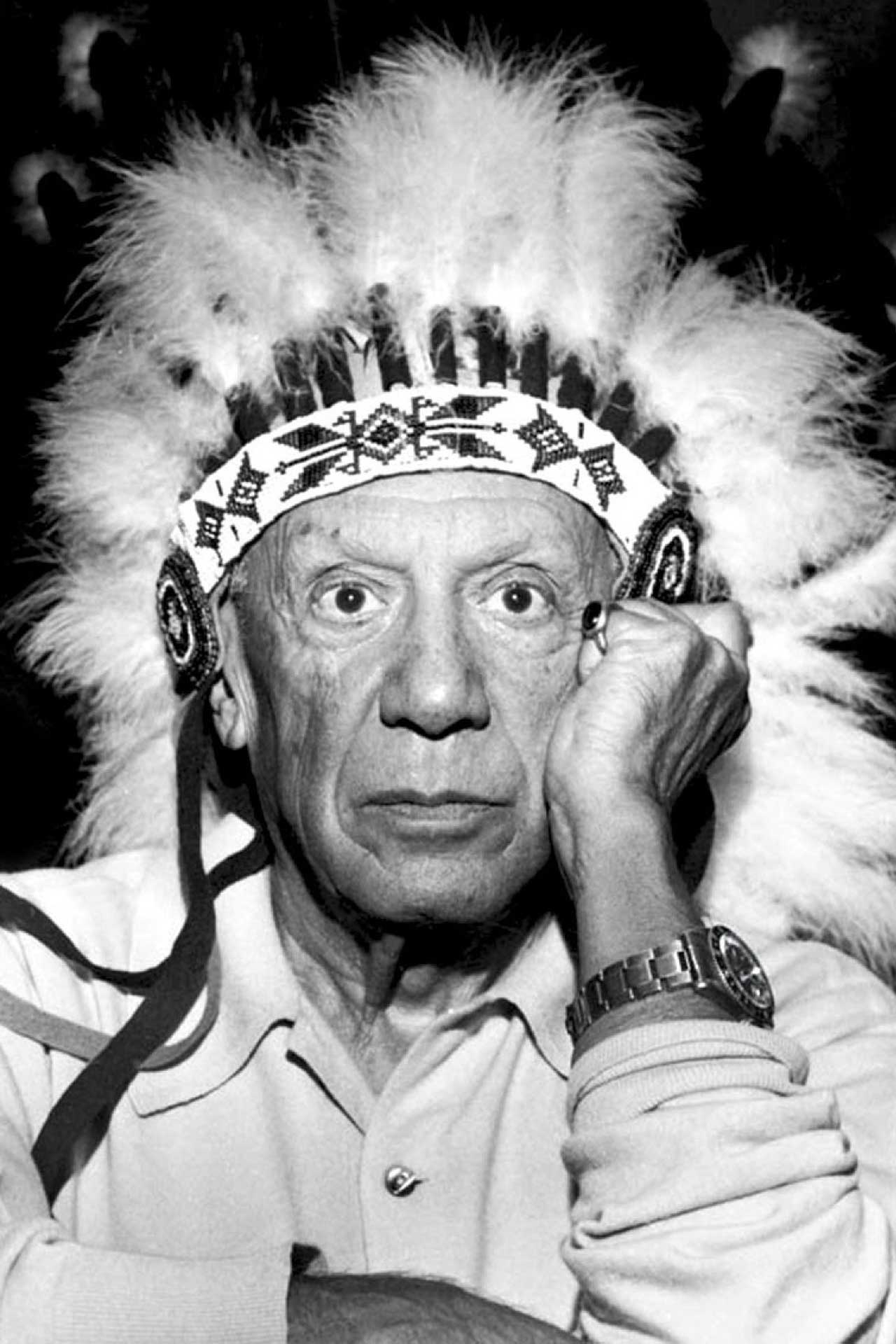