It was always going to be a tough call – like having to choose between Halle Berry or Liv Tyler for a dinner date. To make matters worse, it was an uncomfortably hot, September afternoon in Milan. In front of me, on the counter at watch store Grimoldi, was a brace of Panerais. The prices were nearly identical and rarity was not the selling point that it is today. This was, after all, late-1996, and Franco Cologni had yet to acquire the brand for, what was then, the Vendôme Group. Panerai was only just beginning its ascent.

Like a number of enthusiasts in the mid-1990s, I was utterly captivated by this oh-so-Italian legend and had been caught unawares by the revival of the brand in 1993. As with other watch devotees back then, I knew of Panerai long before its rebirth, but only as a footnote to Rolex history. It had no particular cachet, save for the now-coveted Radiomir model with a Rolex movement.

To the much smaller watch community of the day, Panerais were all but forgotten military models, too rare to worry about. Certainly, they did not figure highly on my lust list. Had a first-series Breguet Type XX or an original Blancpain Fifty Fathoms been on Grimoldi’s counter, too, I probably wouldn’t be writing this story. 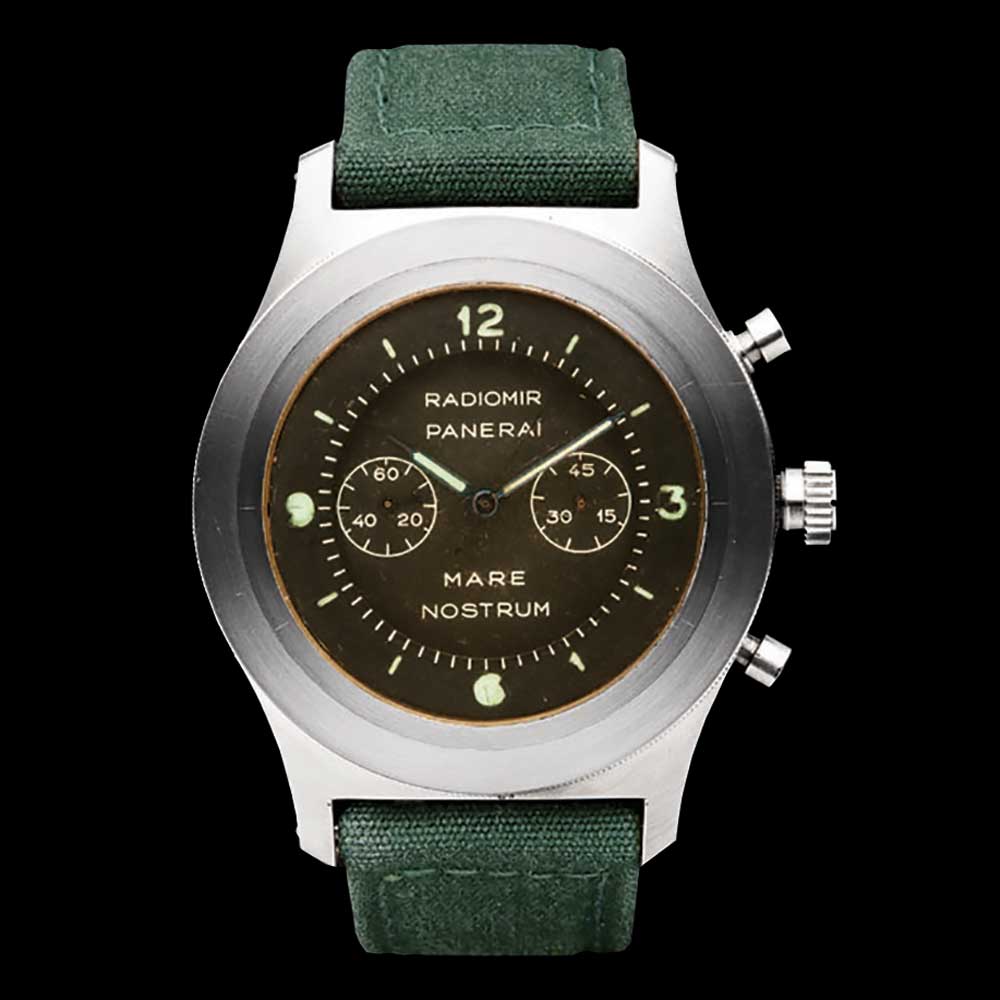 There sat an as-new Luminor with black dial, the classic Panerai with flip-down lever over the crown. Next to it, though, was a watch unknown to me: a Mare Nostrum. This was no ‘Slytech’ legend, just a blue-dialled, regular production model of this chronograph, with catalogue reference 5218-301A and a serial number in the 700s. Its bezel was slightly scuffed, the ugly sharkskin strap clearly having been worn. Regardless, it had its box and papers and demonstrated perfect timekeeping. My head said “Luminor”, but my heart screamed “Mare Nostrum”!

If you were lucky enough to secure an identical Mare Nostrum with box and papers from a retailer today, or find one at auction, you would have to expect to pay nearer to £8,000-£10,000. And if that seems like a bargain compared to the six-figure sums attached to many Panerai rarities, there’s a reason: the Mare Nostrum remains the most atypical, unusual and unlikely of Panerais, because it never really existed in the era during which it was born. 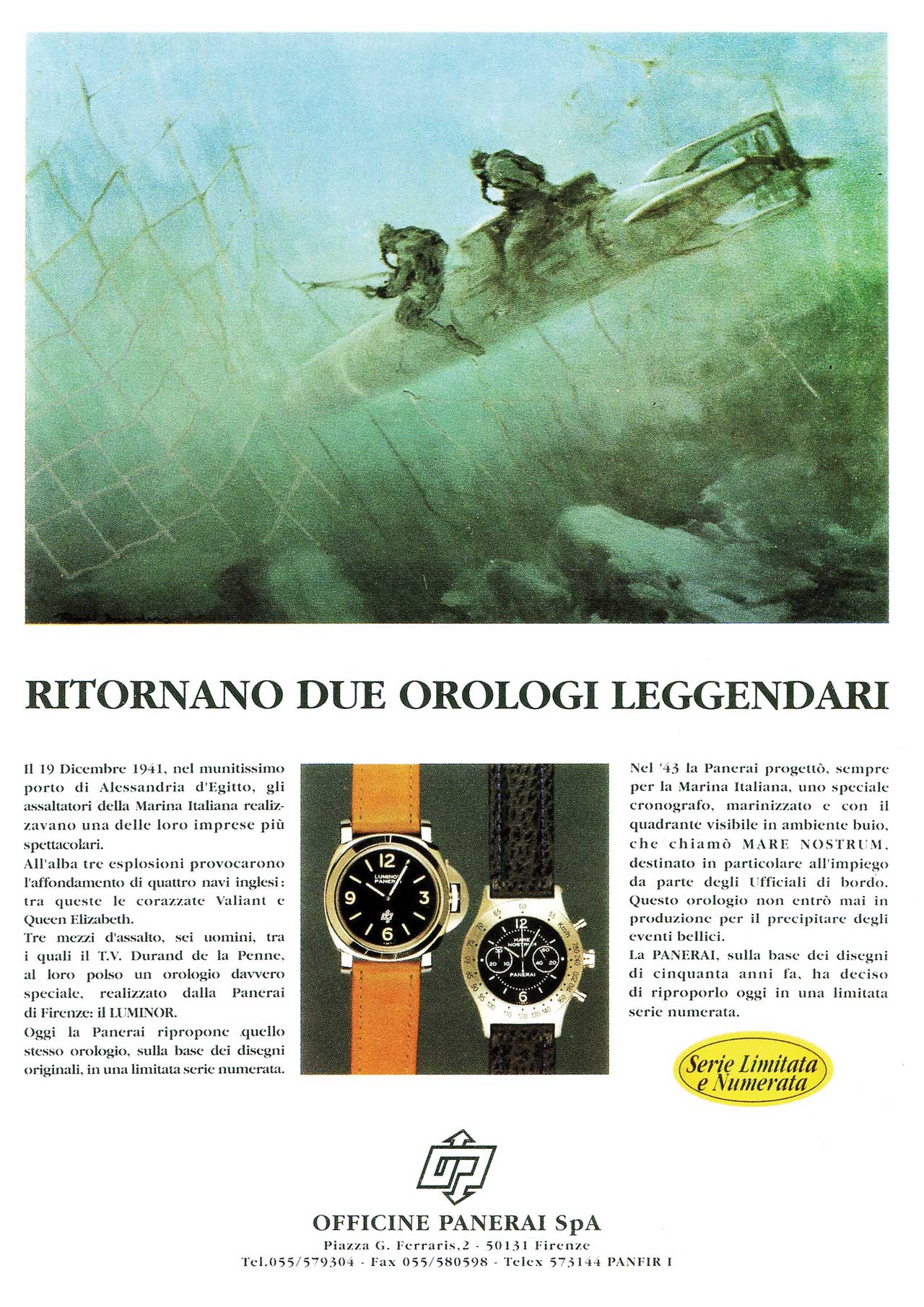 Prior to the reappearance of Panerai in 1993, this Florentine military supplier produced watches solely for the world’s navies, from the late-1930s until the late-1950s. One authoritative source, Panerai Watches From 1936-1997 by Mario Paci, suggests that approximately 1,200 examples were made of all types, including prototypes, for the Italian and German navies during the Second World War, along with special orders for clients such as the Egyptian Navy in the mid-1950s.

Others, however, suggest a figure as low as 300. Whatever the truth is, it is safe to say that Panerais pre-dating the 1990s rebirth are breathtakingly rare. Those who have examined a number of them, in collections or museums, quickly realise that no two are exactly alike. The originals, having been issued to diving specialists who were the equivalent of today’s Navy SEALs, used them in combat. Some boast obscure serial numbers or engravings, like a hand-etched ‘Kriegsmarine’ on the caseback, along with the individual watch’s personal scars and scratches.

It’s the latter that make the true military pieces so fascinating to collectors. Did this one see action? Were the dings and scratches acquired during a sabotage mission? The rarity plus the patina of age have now pushed original Panerais to values above six figures, as made evident in the recent display of vintage examples in Harrods. 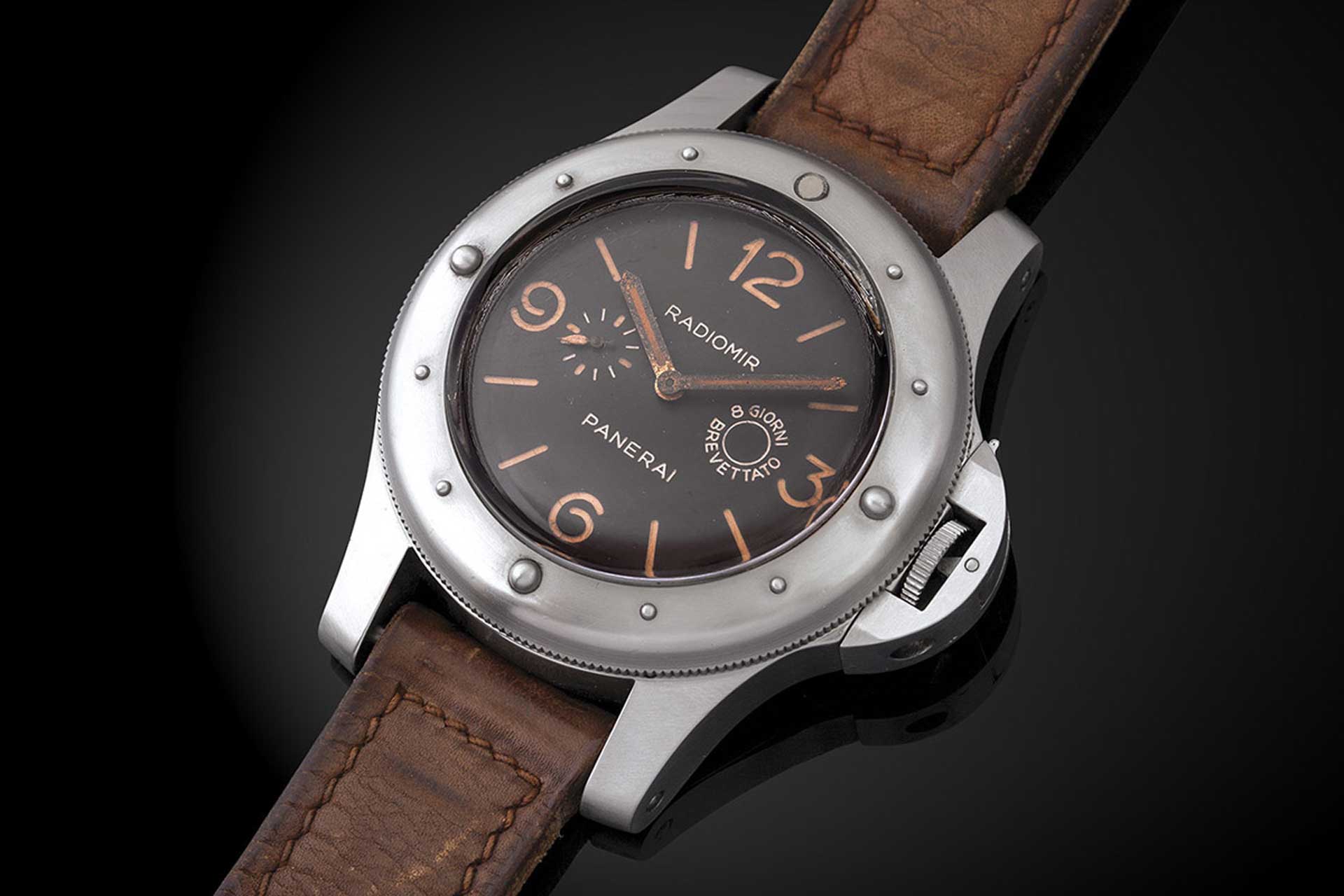 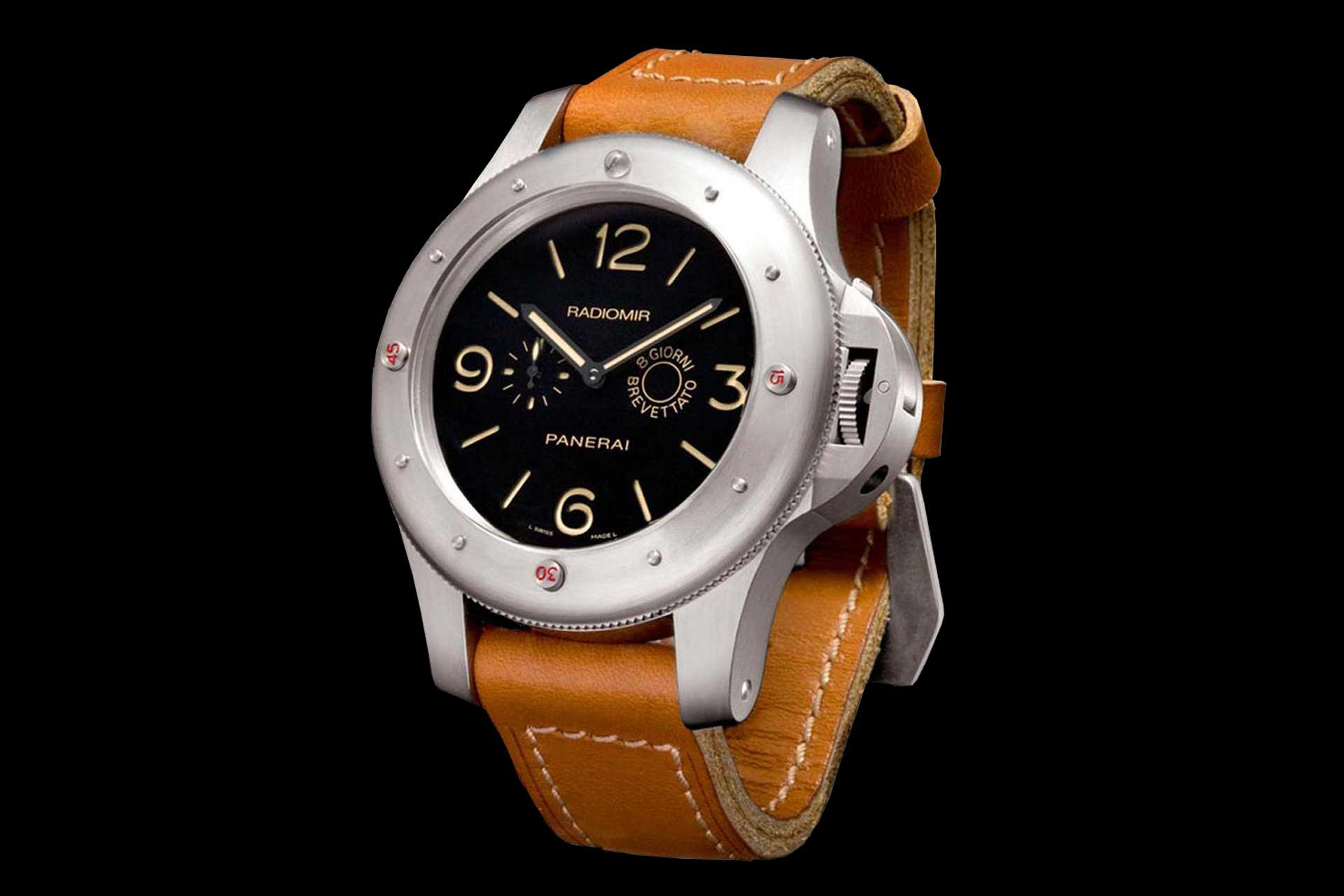 From Sketch To Reality

Considered by Panerai itself as “the most mysterious and rarest of all Panerai models”, the Mare Nostrum was first conceived as standard issue for officers to wear on deck. Unlike other Panerais, which were created for divers, the Mare Nostrum did not have to withstand submersion – a good thing as it was almost impossible to make a chronograph waterproof in the 1940s, due to the apertures through which the pushers were positioned. Development of the Mare Nostrum ended because of the war. Only a handful of prototypes were produced, believed to be three in total.

Panerai’s near-mythical prototypes that never reached production regularly inspire current owners, the Richemont Group, to create weird and wonderful limited editions based on these imaginings. The company is actually following a precedent set by the revived Panerai of 1993-1997. It was during that period that the company, under former Naval Weapons Officer and then-CEO of Panerai Dino Zei, recreated – alongside the Luminor and Marina Militaire – the Mare Nostrum chronograph, which, at the time, was known only through drawings. Most documentation was lost, in part due to the flood that hit Florence in 1966. 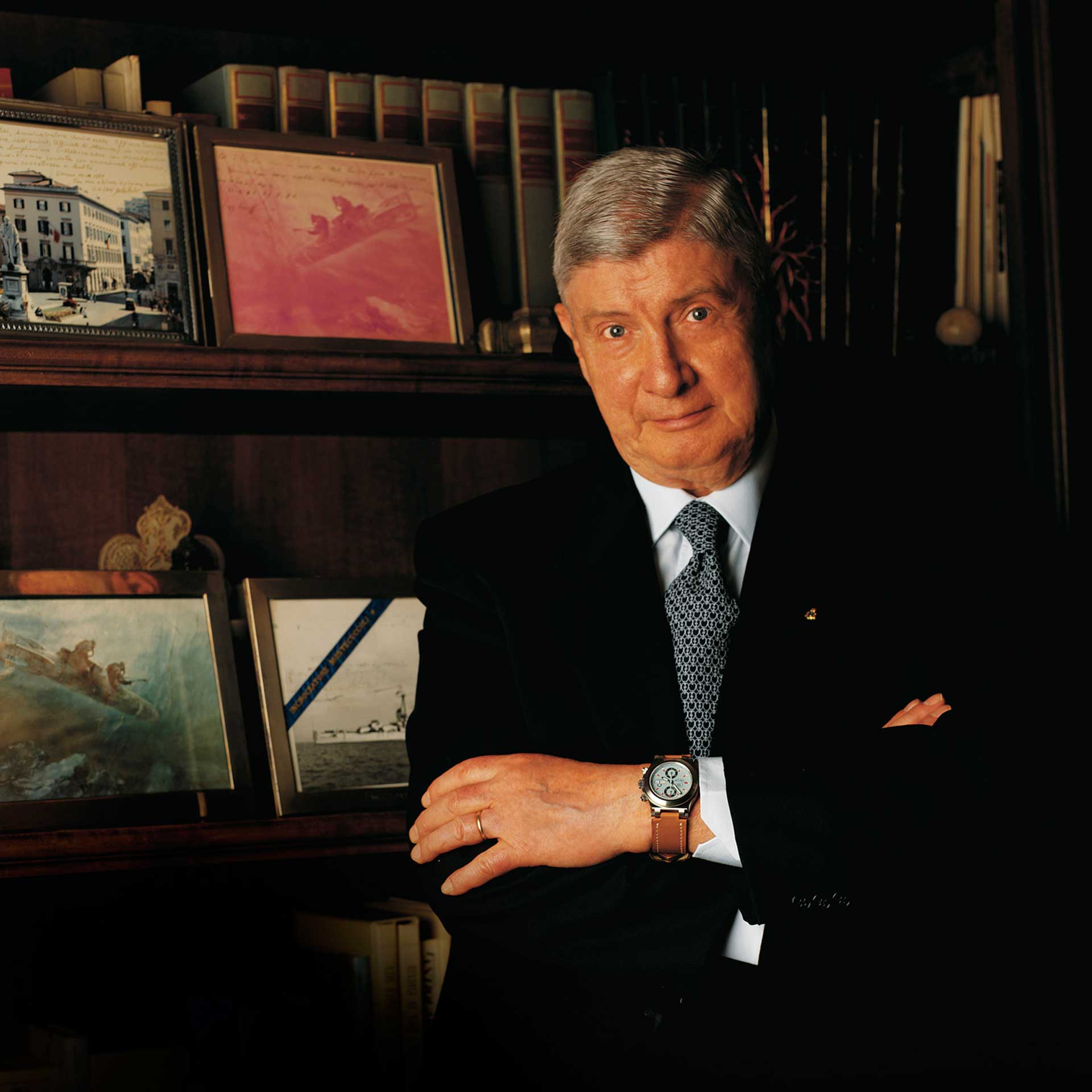 As Officine Panerai was not a watch brand per se, it was only ever likely to produce a few thousand pieces of all of the new models in total. The project was a brave move in 1993, but something happened to expand its market beyond Italy. The new Panerais sold out quickly because they came to the attention of Hollywood A-lister, Sylvester Stallone. He fell in love with the oversized timepieces – then considered gargantuan, now mid-sized – and ordered a few hundred pieces for friends. Word spread.

Panerai reissued 889 examples of the Mare Nostrum chronograph. The reimagined replica measured 42mm in diameter, with a flat dial and a movement based on an ETA 2801-2 calibre, modified with Dubois-Depraz components. The actual production numbers and units sold are still debated, with some sources positing that the grand total sold may be as low as 500, the remainder ending up with Vendôme after the purchase. 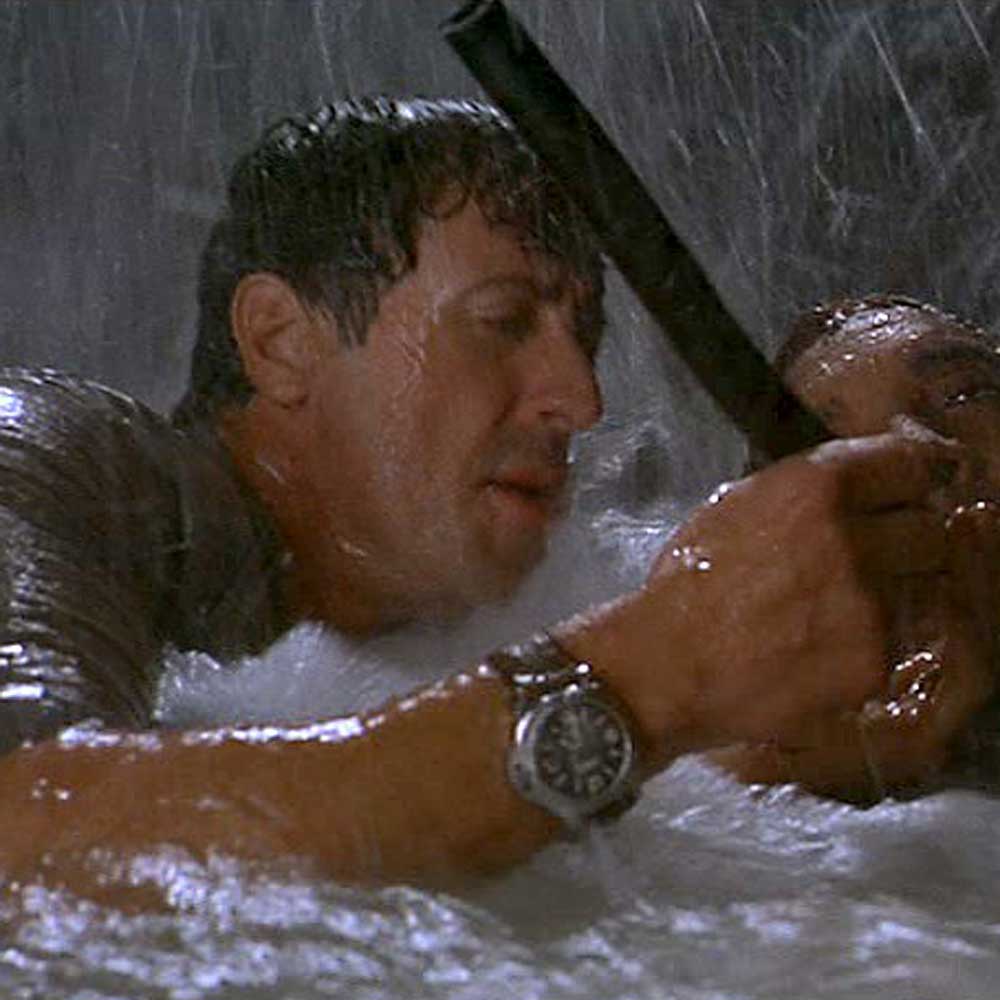 Because of Stallone’s invaluable patronage, Panerai added the name ‘Slytech’ to the three models he purchased, among them a planned 100 Mare Nostrums. The Slytech Mare Nostrum reference is 5218-302, with the last watches of the series – referenced 5218-304 – featuring a plain bezel minus the engraved tachymeter. All Slytech models are now highly coveted, selling for considerably more than the ‘normal’ equivalents.

Most common of the non-Stallone Mare Nostrums is reference 5218-301/A, a 42mm diameter, two-register chronograph. The case is stainless steel, it has a slate-blue dial, and a tachymeter bezel; the dial reads ‘km/h’ at one o’clock, but later editions read ‘tachymeter’. While the majority featured the blue dial, around 90 white-dial versions were offered, and 172 with black dials.

After the pre-Vendôme models – and the remaining stocks that were re-dialled by Vendôme –sold out, it seemed that the Mare Nostrum would forever remain an odd cul-de-sac in Panerai lore. But the watch industry likes to yield its secrets in a truly unplanned way: Panerai discovered one of the prototypes, which was not only of larger dimensions, but also had a different dial. 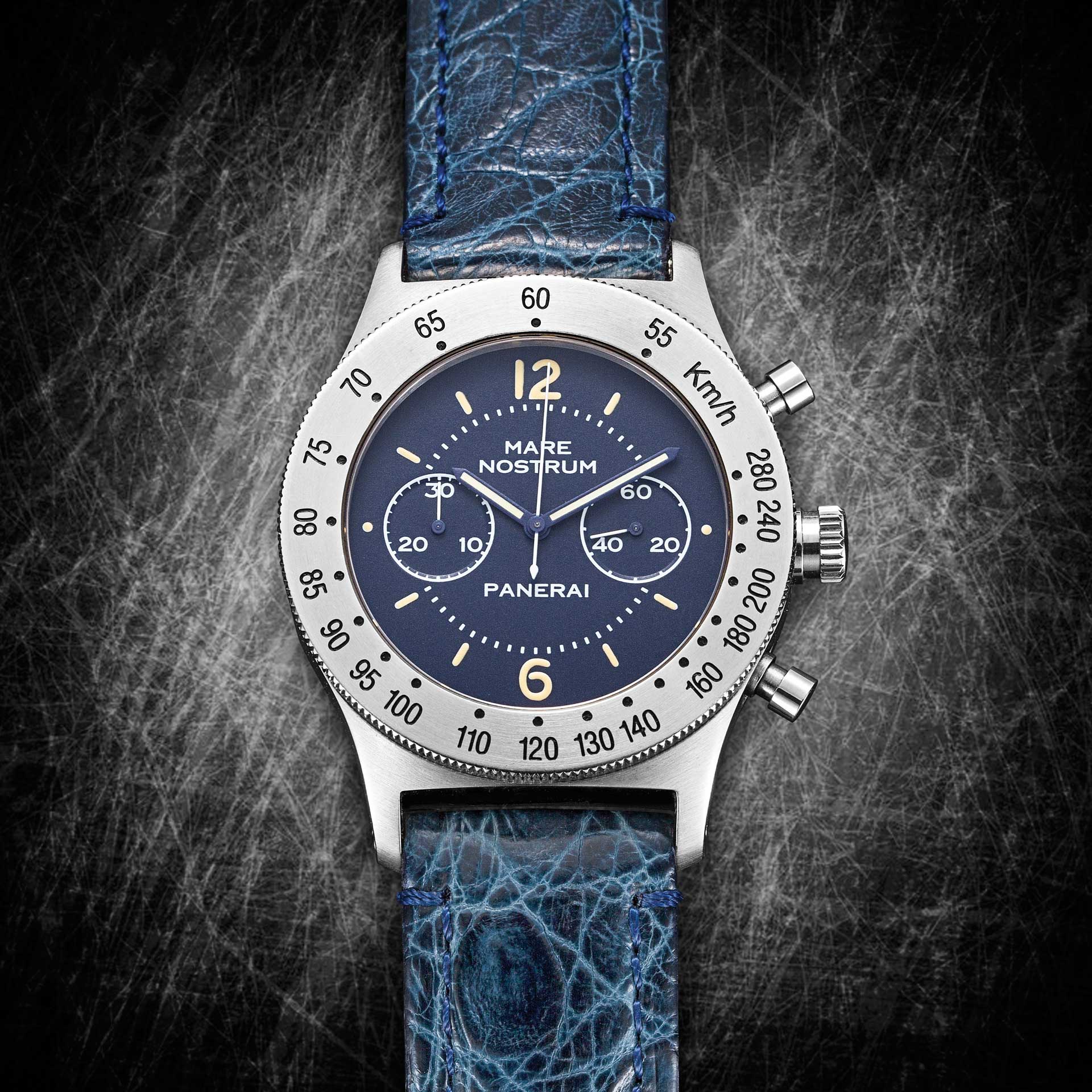 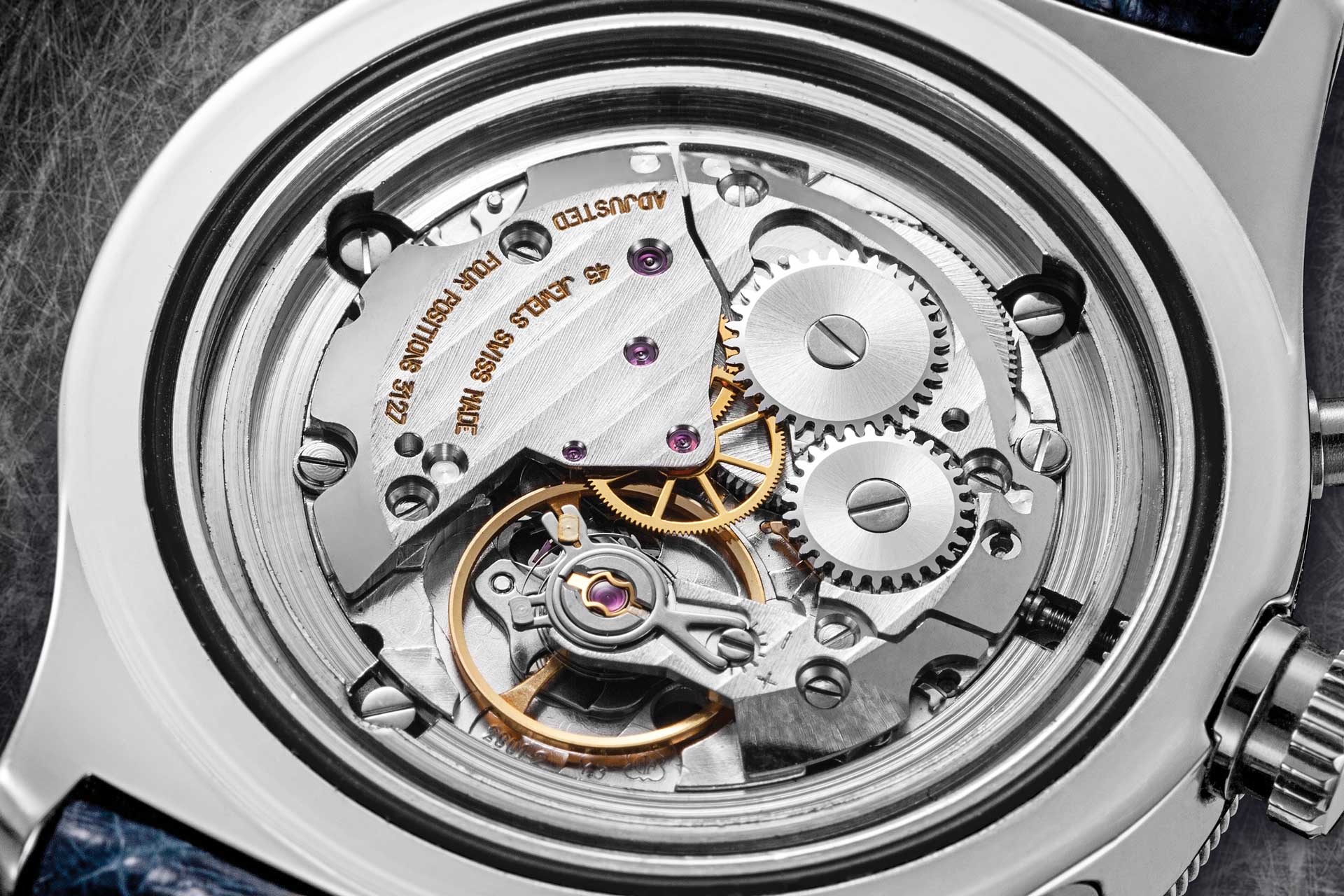 A Time Worth Revisiting

In 2010, Panerai produced an exact replica, identified as reference PAM00300. Its main distinguishing feature is its 52mm diameter, dwarfing the 1993 edition. Its bezel is smooth, unlike the majority of the 1993 pieces, most of which featured tachymeter scales. Also, like the actual prototype, the dial is a two-part, layered affair, which adds visual depth to the watch. The dial also features the word ‘Radiomir’.

Inside is a modified version of an historical, hand-wound Minerva 13-22 movement, of which the purists will approve, as Panerai had dealings with Minerva in the past – although the prototype was actually fitted with an Angelus calibre.

As a final touch, Panerai fitted the Mare Nostrum with a strap in the same colour and material as the prototype: military green in leather-lined fabric. The only visual clue to its later provenance is the buckle, a large trapezoid shape similar to those on other current models. Today, you’d be lucky to find one of the 99 for less than £30,000. 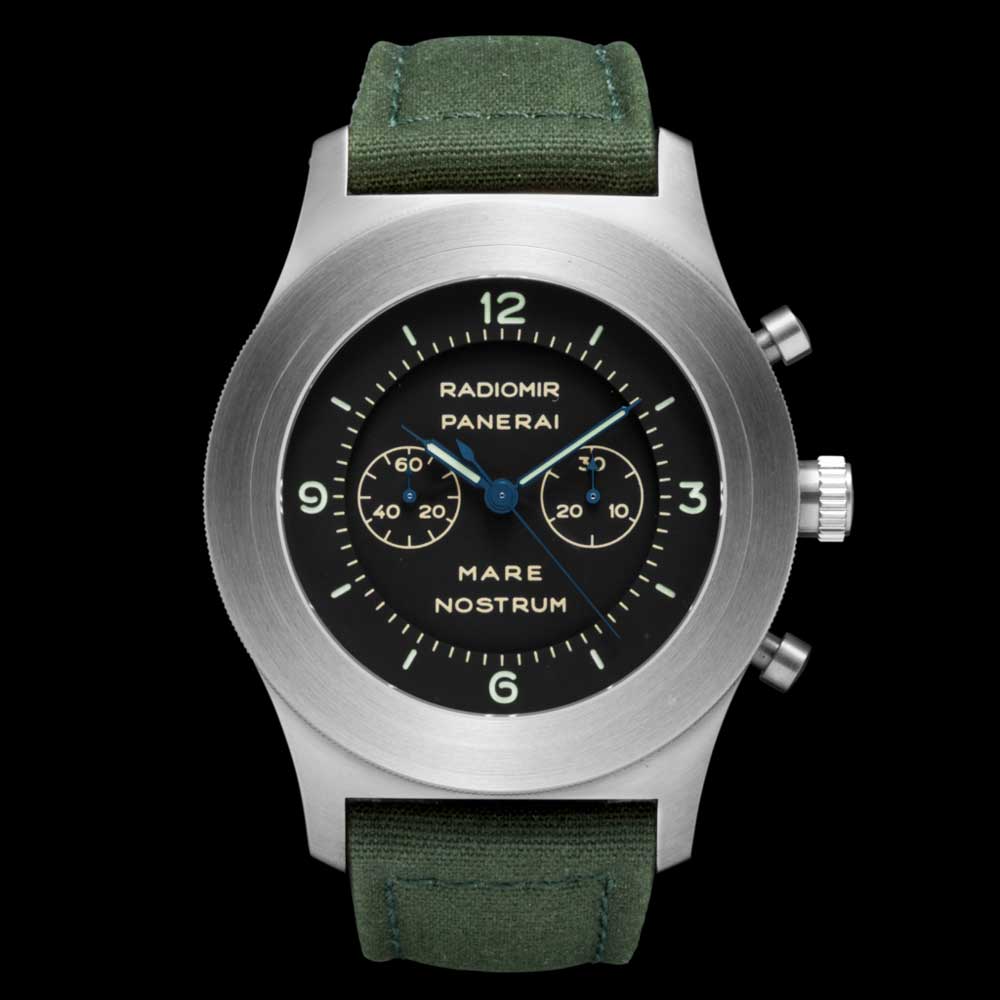 As impressive as the PAM00300 may be, the smaller Mare Nostrum from 1993-1997 is probably more wearable. The 52mm version is possibly more desirable, especially if, like me, you adore Minerva. But envy is an ugly thing, so I’ll just sigh with contentment as I gaze upon my Mare Nostrum. After all, there aren’t that many watches that stop Revolution’s founder Wei Koh in his tracks. 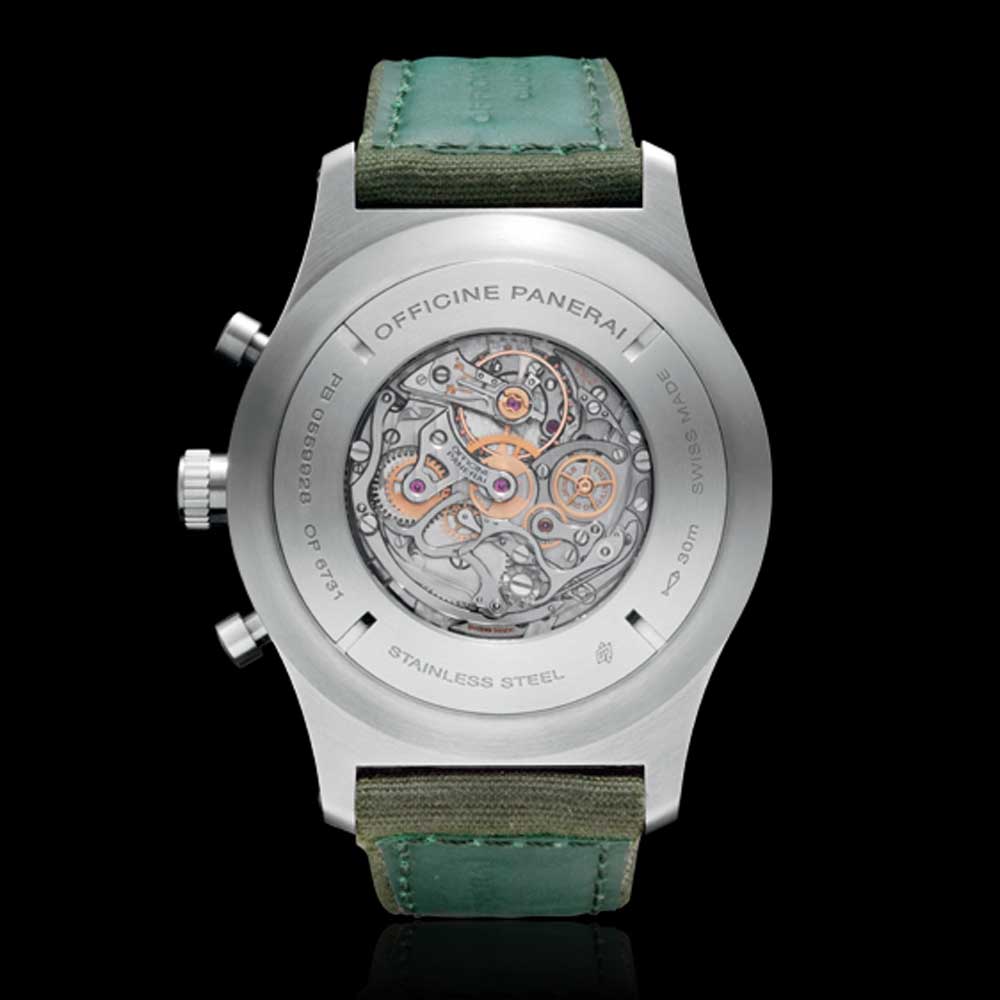