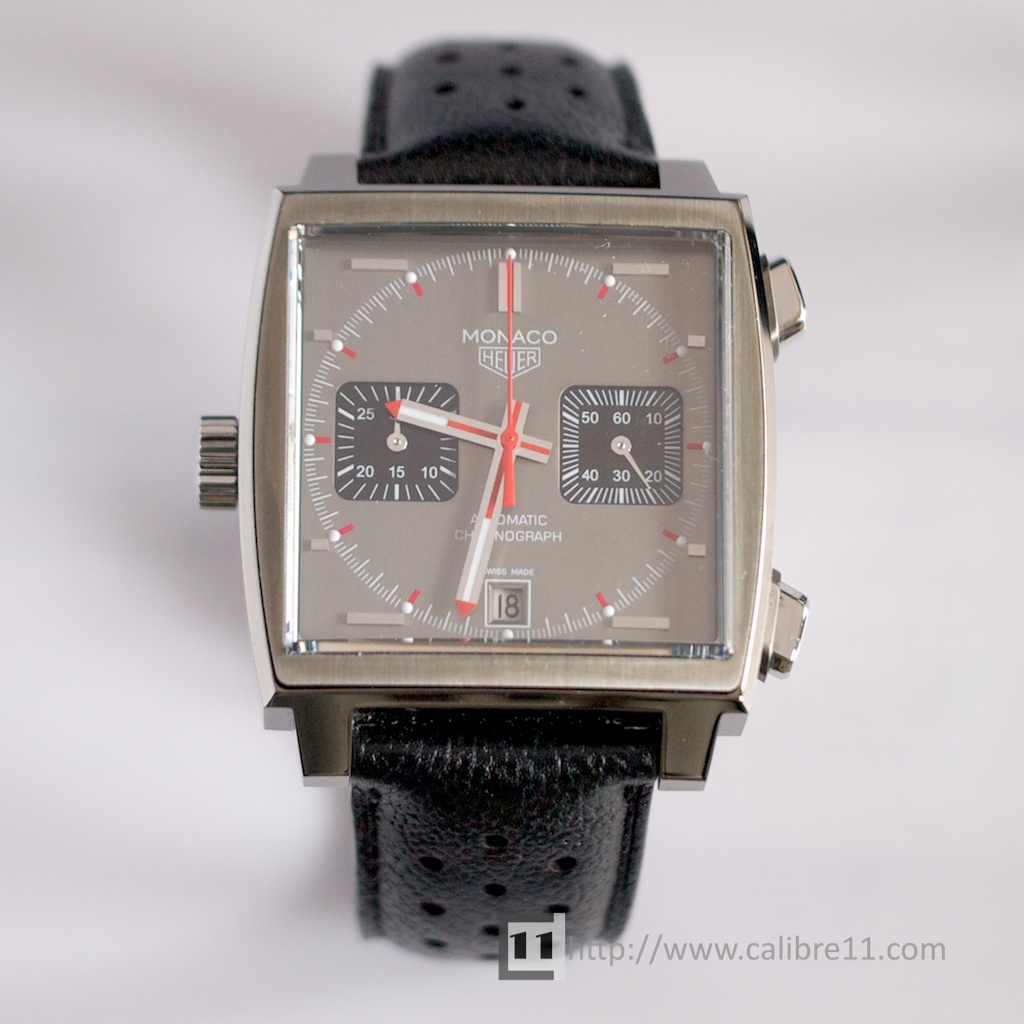 This new watch- Ref CAW211B (The watch shown for this review is pre-production and still has the old Reference number as shown at Basel- CAW2115)- is basically a grey version of the 40th Anniversary Monaco released last year, with two important differences. Firstly, the case of the Monaco Vintage is finished in a subtle charcoal stainless steel and secondly, the Monaco Vintage will sell for almost half the price.

The 40th Anniversary and new Monaco Vintage are my favourite of the re-edition Monaco series, because they are the truest to the original design. And if you’re going to do a re-edition, then you may as well get the details right, which for the most part, is exactly what the Monaco Vintage does.

Isn’t a Heuer Monaco meant to be blue? While blue is indeed the iconic Monaco colour, many collectors prefer the grey 1133G Monaco to the one that McQueen wore in Le Mans. There is something a little more stealthy about the grey dial that many prefer. Personally, I love the blue, white and red combination of the 1133B Monaco, but you have to love the contrast between the slate grey dial and the bright red accents and hands.

The original 1133G Monaco had two main variations- sub-dials in grey (as in the example below) or in a contrasting black, as adopted for the re-edition. You can see from the photo below that the Monaco Vintage sticks very close to the original. Putting aside the differences in the case and- importantly- pushers (which you can read about here), the only two changes worth pointing out are the lack of the metal date-window border and slight changes to the design of the hands, especially the central chrono. seconds hand and the two sub-dial hands.

The Monaco Vintage is based on the current Calibre 12 Monaco design, which means a 39mm case and a sapphire crystal replacing the plexiglass. As mentioned above, the case has a subtle charcoal finish that is incredibly hard to photograph accurately, but looks fantastic. There was speculation about whether the watch is PVD- it’s not- but it does have a darker finish that the usual Monaco colour.

The photo below gives fair indication of the case colour- note that the pushers and crown are the usual stainless steel colour, so you can see the contrast.

The dial has a similar finish to the original Heuer Monaco Grey, with a slight vertical grain pattern. I love the contrast of the red and the grey, although the only point worth noting is that in some light it can be hard to see the white hash markers on the dial, as there isn’t enough contrast with the light grey. 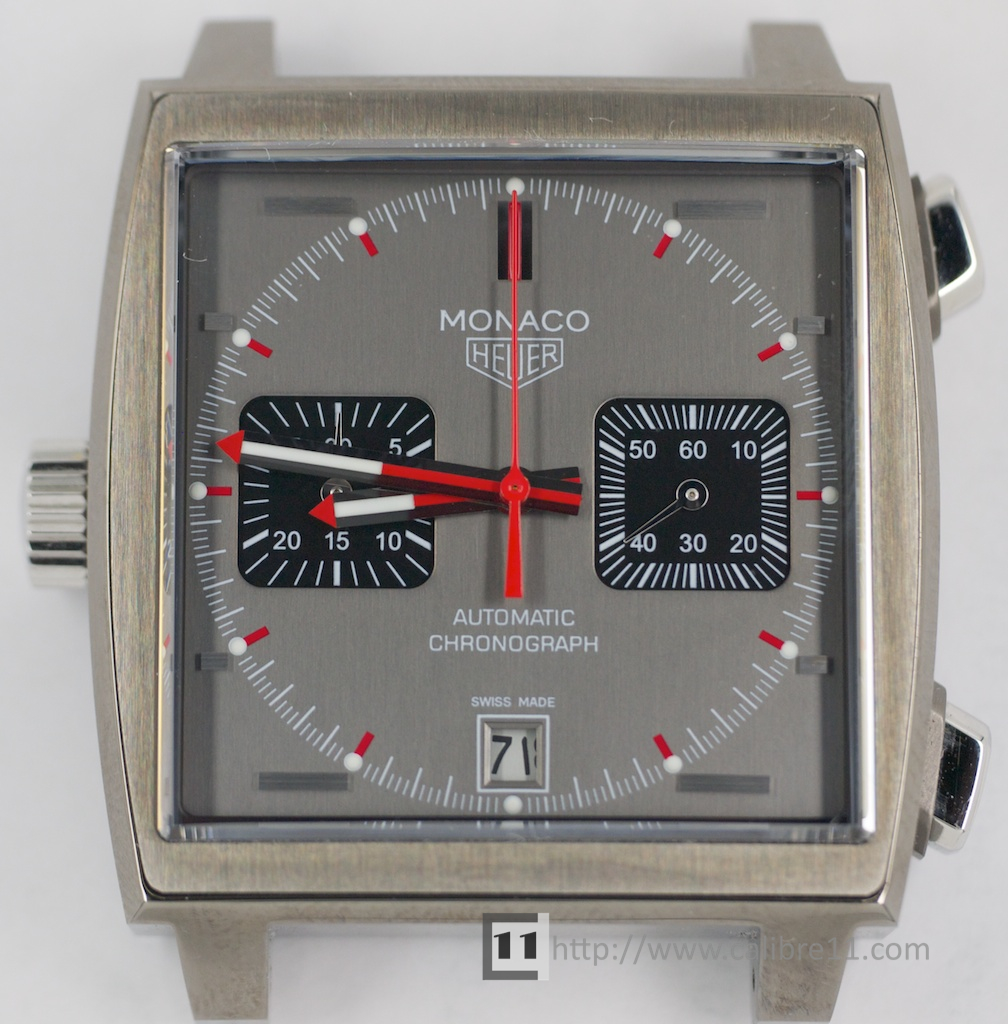 Overall the watch looks great- with only one minor gripe…what happened to the sub-dial hands? The original design as used on the 40th Anniversary Monaco is a simple circle with a stubby straight line. For some reason, the Monaco Vintage changes to a more pointy design, which not only makes the watch looks less like the original, but also simply doesn’t look as good. To cap it off, these hands are finished in silver, instead of the original- and “correct”- white.

I doubt that anyone is not going to buy the watch because of this small change, but you have to ask: why make the change in the first place? It’s not better, just needlessly different. 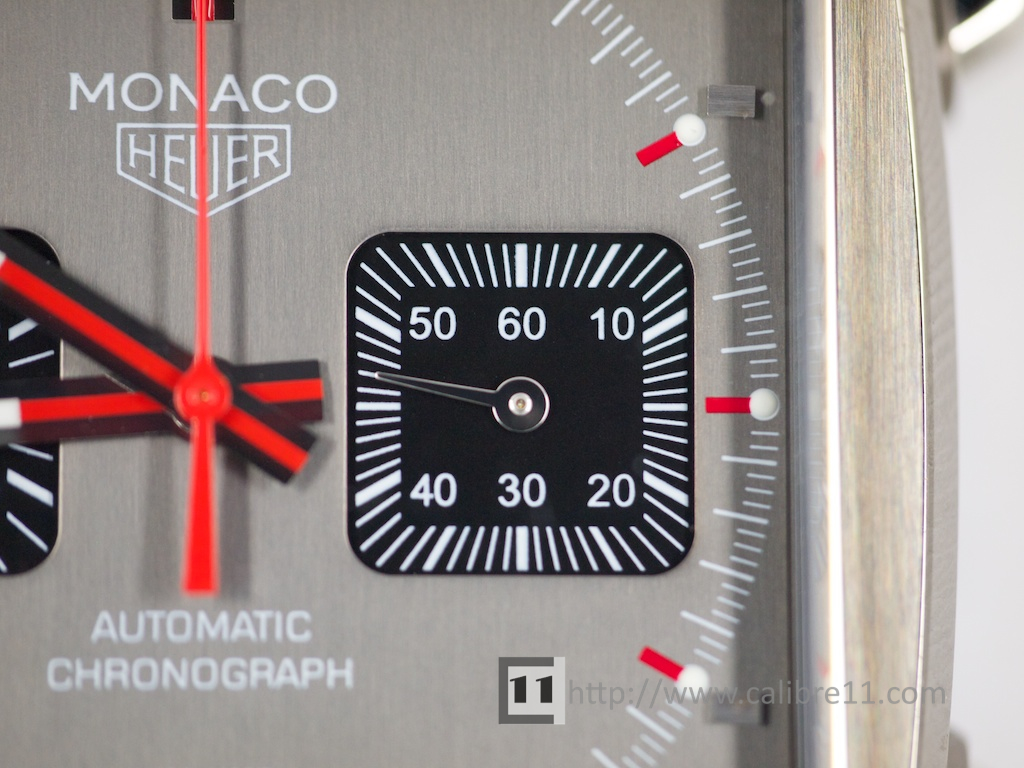 The watch is finished with a great rally-style leather strap featuring a Heuer shield on the deployment strap. It’s a great strap and is the same one used on the Blue 40th Anniversary Monaco. One other feature worth pointing out about this strap- it has a built-in removal tool. The Spring bars has a small vertical “handle” that you simply pull to release the strap. It’s a superb system that works so well you wonder why every leather strap doesn’t use the same system.

The Monaco Vintage is the fourth TAG Heuer (after the Autavia, Silverstone and 40th Anniversary Monaco) to use the modern incarnation of the Calibre 11 movement. The new Calibre 11 is a ETA 2892/2 base with a Dubois Depraz Chronograph module. The Calibre 12 also uses the same ETA/ DD combination, but with a different Dubois-Depraz module.

Cosmetically, the Movement looks fantastic and a lot of work has gone into the finishing of the dial which is visible through the sapphire case back. 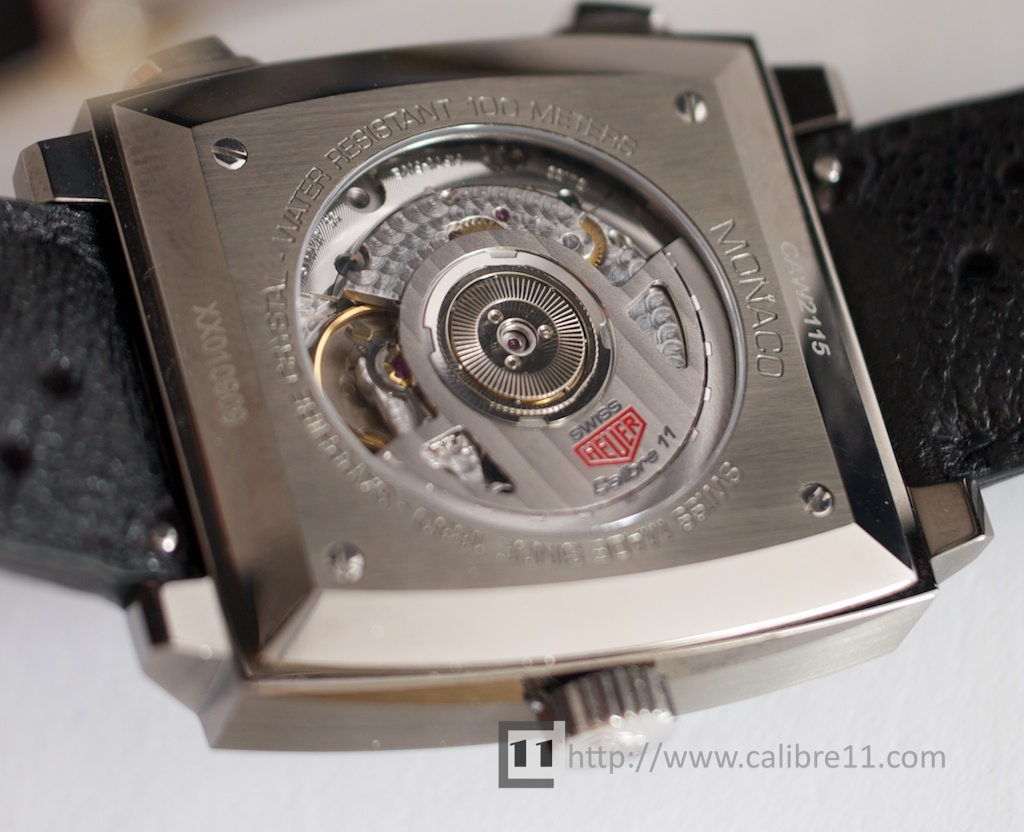 The rotor has the traditional Cotes de Geneve finishing as well as the red Heuer shield. Note also the Perlage (the overlapping circular patterns) finish visible underneath the rotor. 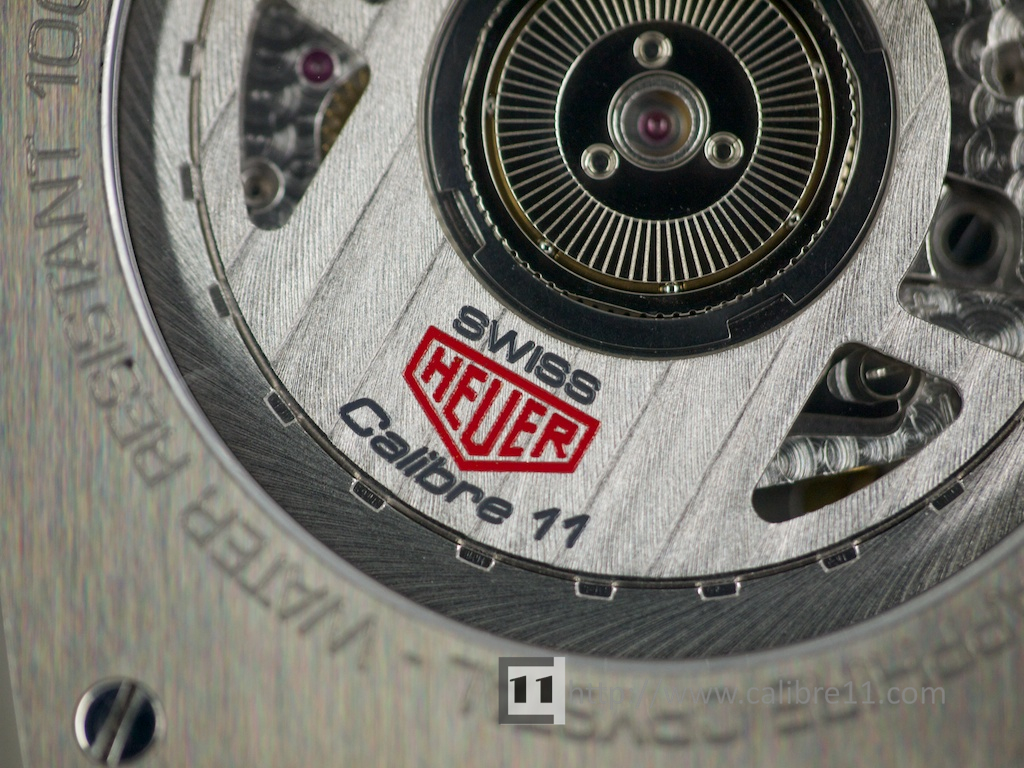 Lastly, one of the great things about using the Calibre 11 movement is that its been specially engineered to allow the crown to sit at 9 o’clock- just as it was on the original Monaco (by necessity of the original design) and just as it should be on all Monaco’s. There is no design benefit to this- it’s simply a tip of the hat to the original.

To make these comparison shots, I have once again pulled in my CW2113 Monaco, which is a 2005 model, meaning Calibre 17 movement, 38mm case and plexi. I mounted the Blue Monaco on the same strap as the Monaco Vintage- I think it looks a lot nicer than the Crocodile strap that comes standard..although it would be even better in blue leather. 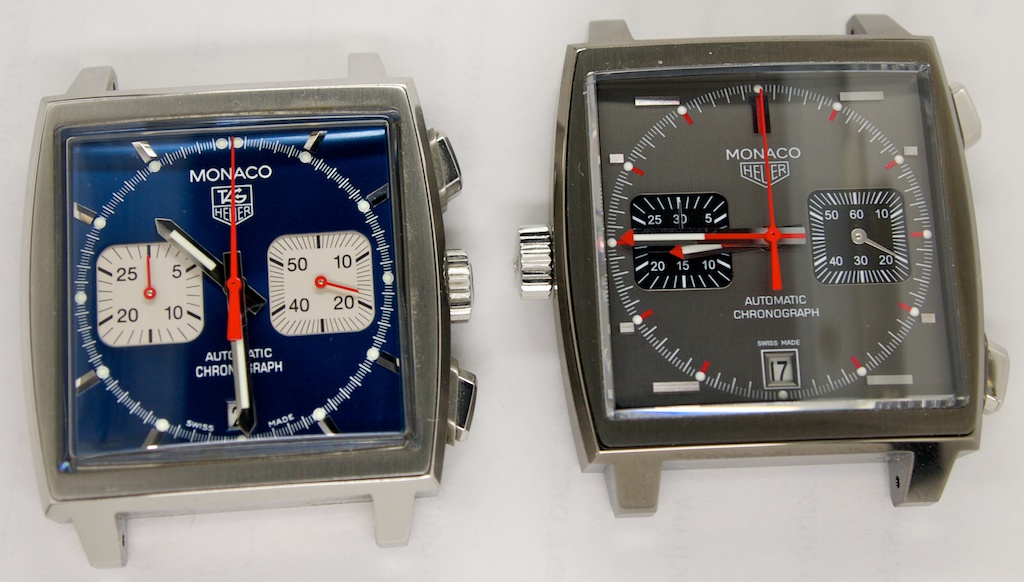 The purpose of these photos is to try to show the true colour of the charcoal case- you can see that the depth of the charcoal really depends on the light, as it has a reflective finish. 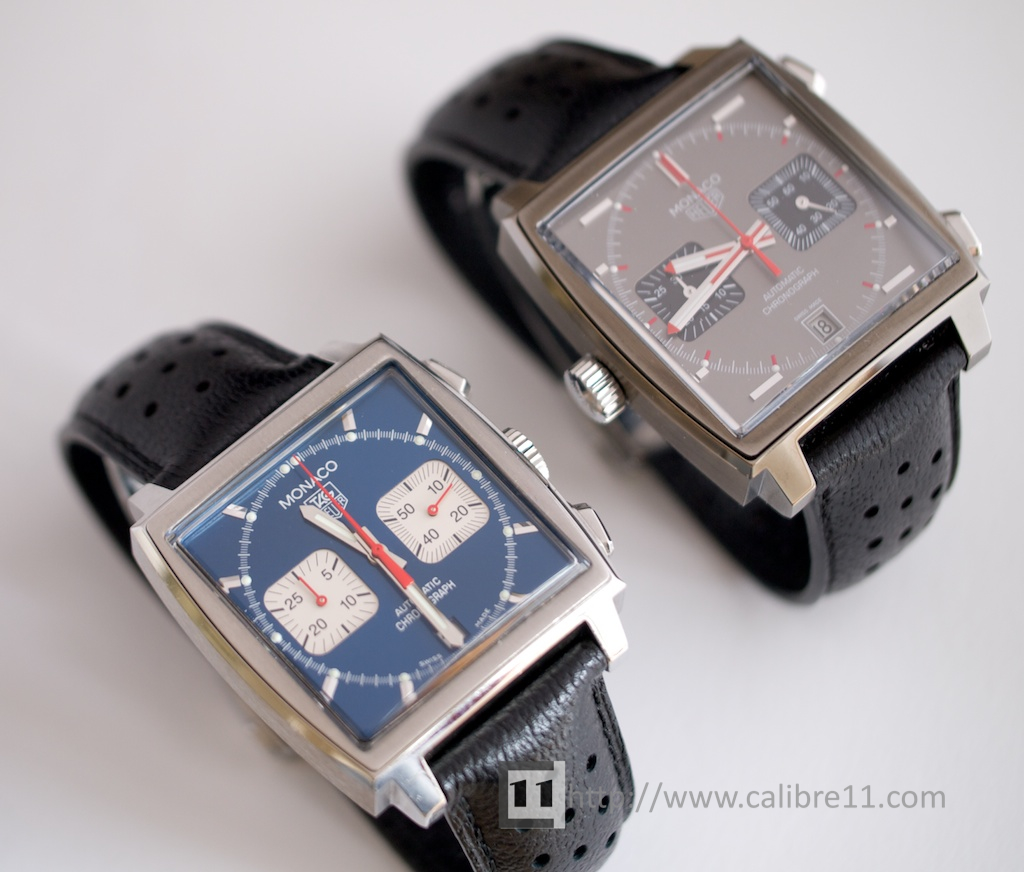 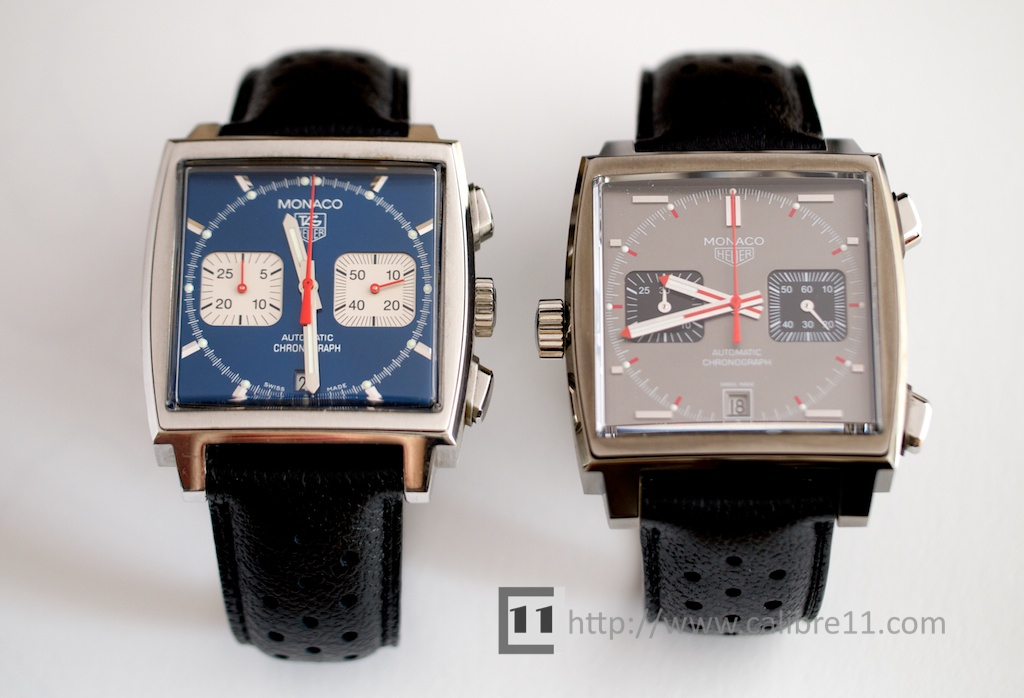 I have to say that I didn’t really notice the larger diameter of the Monaco Vintage, but as you can see from the photo below, the case is slightly thicker (Monaco Vintage on the right) and the sapphire crystal slightly less curved, making the watch look noticeably larger- but I suspect you’d only notice the difference if you line it up next to the older design.

Apart from the charcoal case, you’ll only notice two small changes- the design of the sub-dial hands and the lack of a metal surround on the date window.

If you took out a measuring tape you’d also notice that the 40th Anniversary case is 38mm, while the Vintage is 39mm.

But there is one big difference between the two colours- and that’s price.

The Monaco Vintage will retail for USD5,200 in the US, which is about a USD700 premium over the RRP of the standard Calibre 12 Monaco.

Overall I really liked this Monaco. I’m a Monaco fan anyway, but I was surprised how much difference the Sapphire crystal made- OK, it’s not true to the original design, but it does look great.

What I liked about this Monaco- especially when compared to the Monaco Twenty-Four that I reviewed last month, was that this is a much more classical watch that you could easily wear with a suit without attracting too much attention- certainly less attention than a black PVD watch with bright orange stripes.

I loved the Charcoal case finish as well, although as noted, you really need to see this in person to get a handle on the true colour. 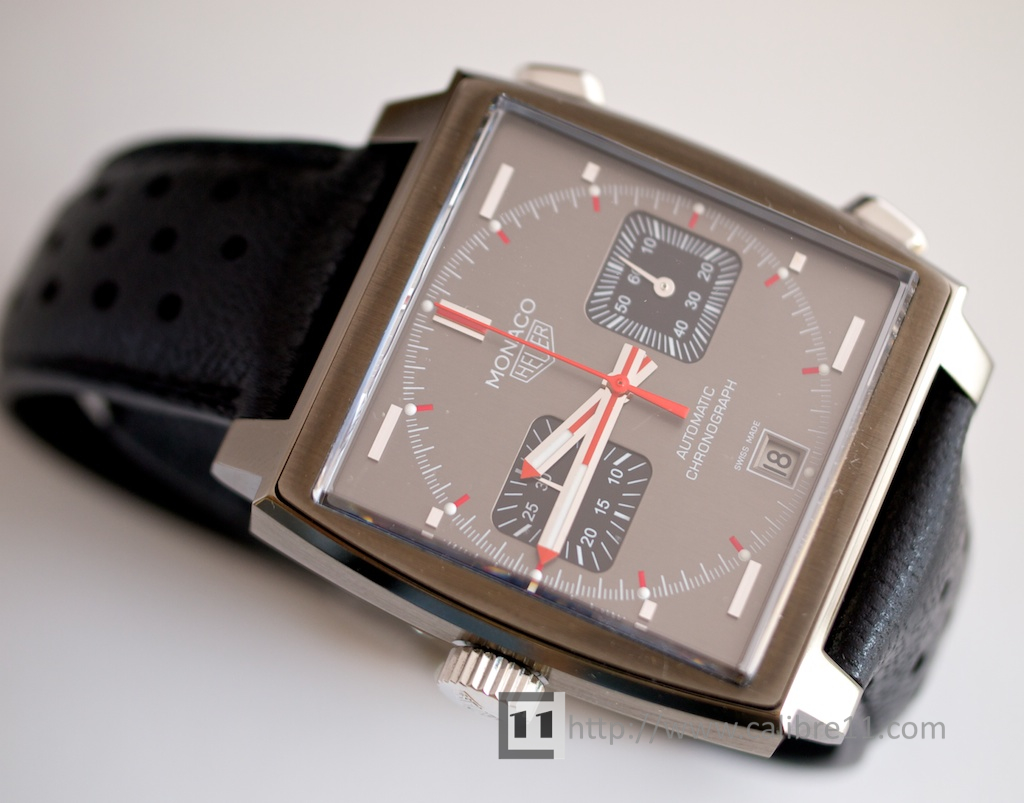 The TAG Heuer Monaco Vintage should be available in the next few weeks, although with only 1,860 to go around, you may not find them in every dealer, so if you want one it’s worth thinking about placing an order.

As the owner of too many vintage Heuer watches, I guess the obvious question is whether I’d recommend the re-edition or the original. I’ll take the easy way out and say that it depends. Once you get plugged into the Vintage Heuer world it’s quite possible to find an authentic original Monaco and parts and meet the right people to competently service your watch. But for many people, the risk of buying vintage and the extra maintenance costs will drive you towards a re-edition that offers 90-95% the same looks but without the hassle.

It’s impossible to convince the vintage crew that a re-edition is ever “better” than the original, just as many TAG Heuer buyers would never consider a 40 year-old watch that probably has a 50% chance of having some dodgy parts/ history. As collectors, we’re lucky to have the choice.

Lastly, you may have noticed that these all the photos in this review are “clickable” to a larger size, and I’ll try to do the same with all future posts. 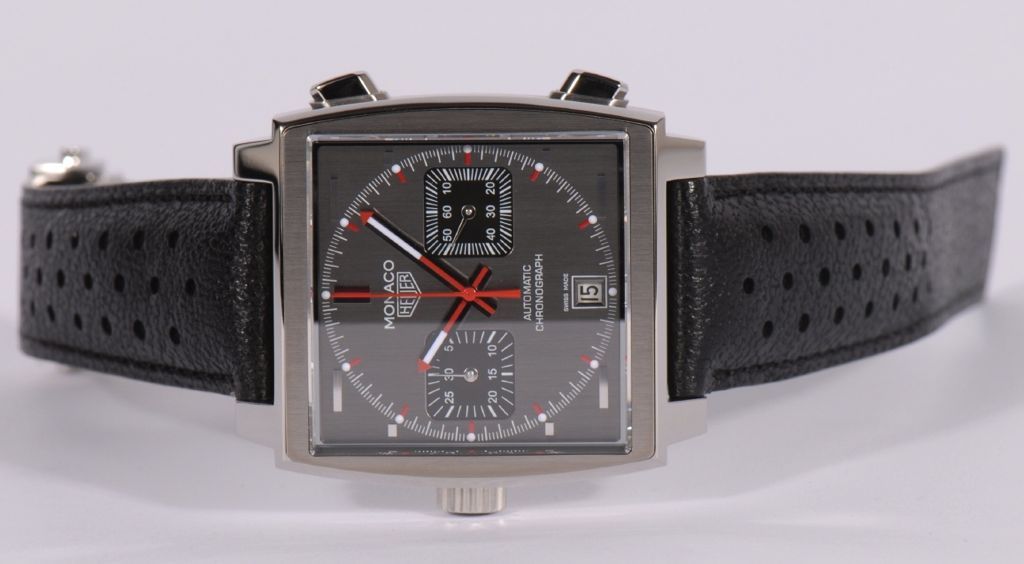 Since this review was written the first of these models have begun to find their way into the stores in South East Asia, Japan and Australia- good news. However, the production watch has lost the charcoal coating of the prototype used for this review, meaning it uses the same stainless steel polished case and the other models in the Monaco line-up. 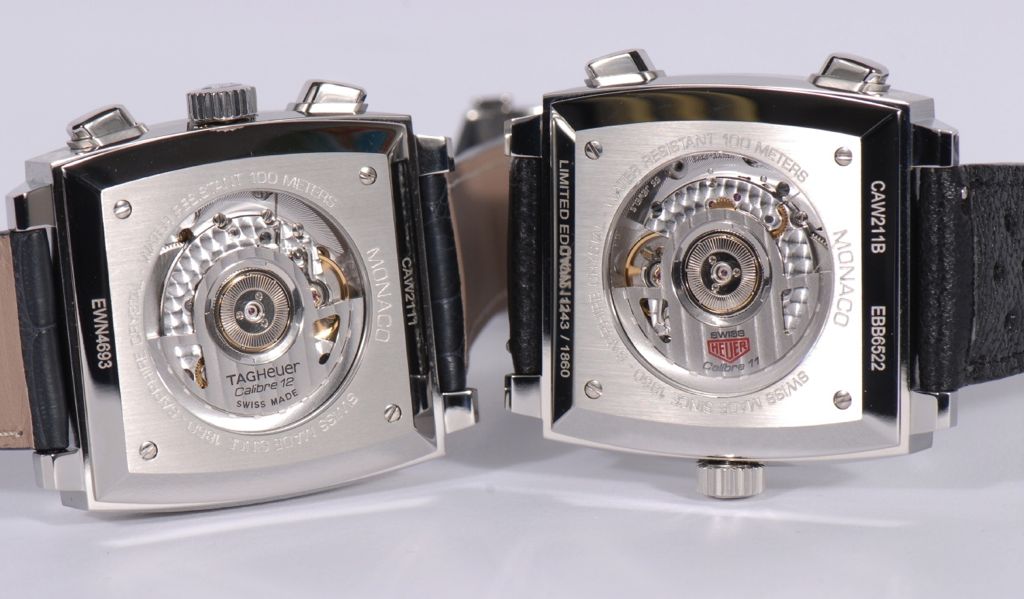 So what happened? I understand from TAG Heuer that they were not 100% happy with the durability of the coated finish, and so decided to back back to stainless steel. A real shame given the distinctive colour of the case, but certainly better than releasing the watch as it was and having people complain that their new Monaco was not up to standard. Hopefully TAG Heuer can improve the quality of that coating process and use it on a later model. 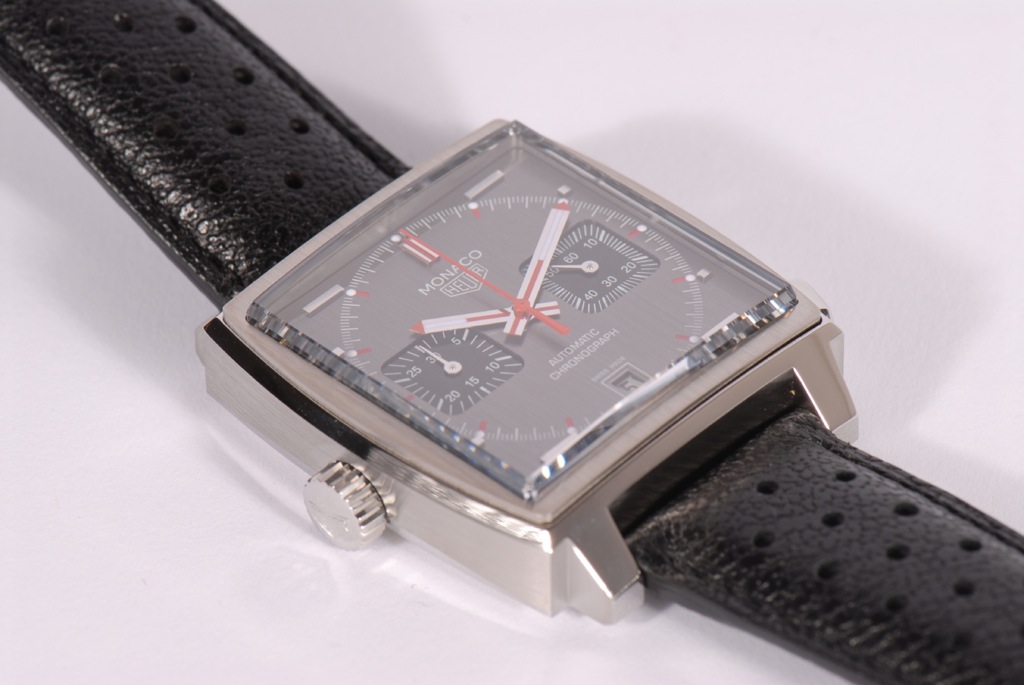 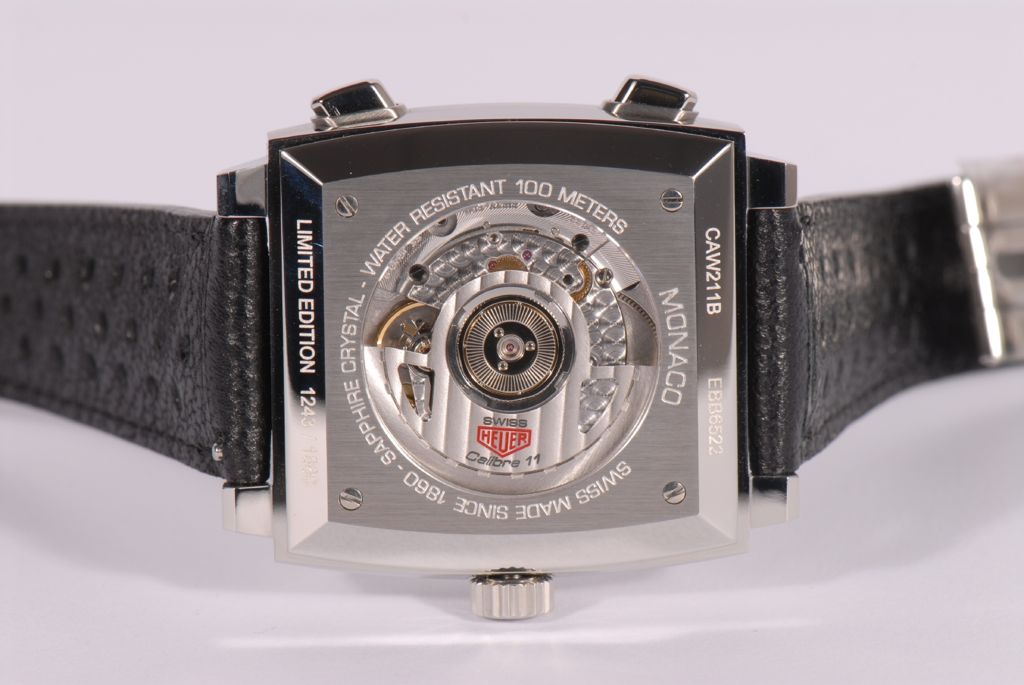 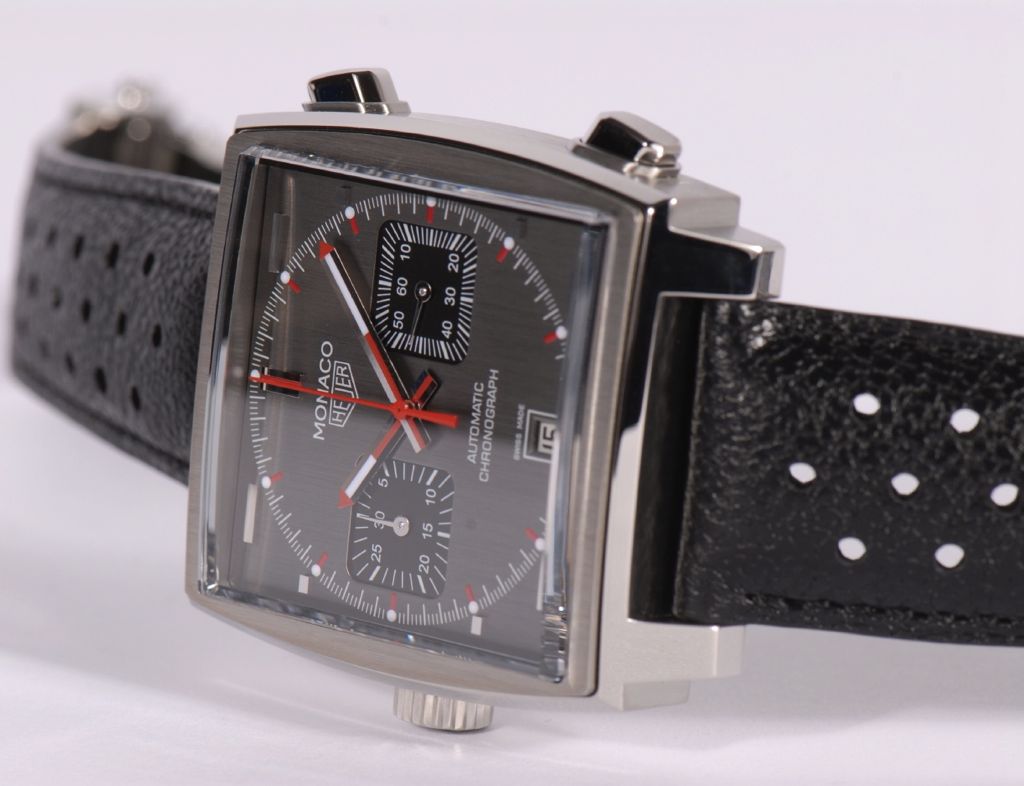 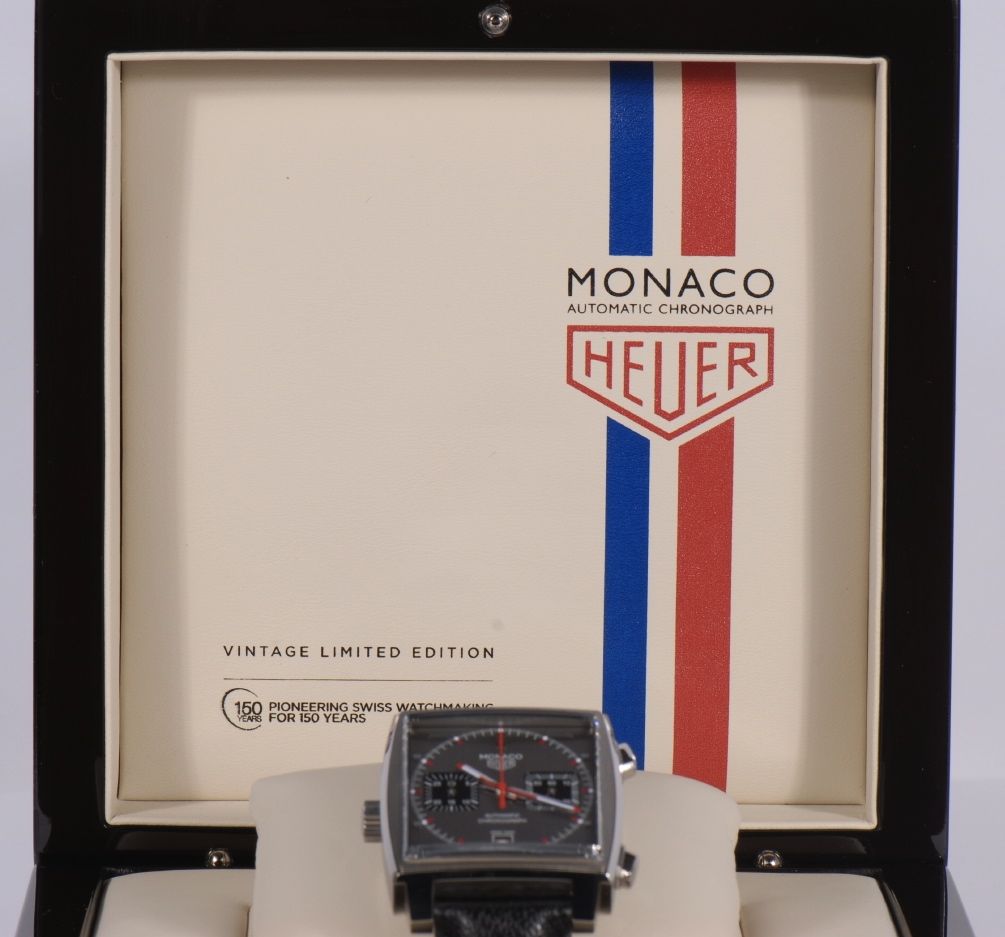 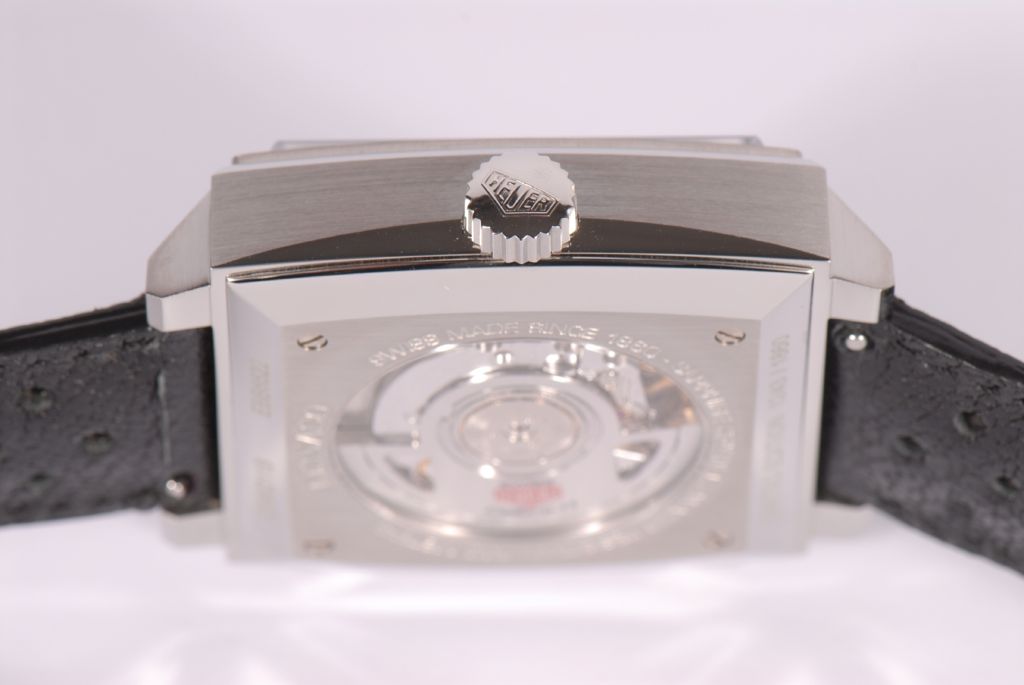 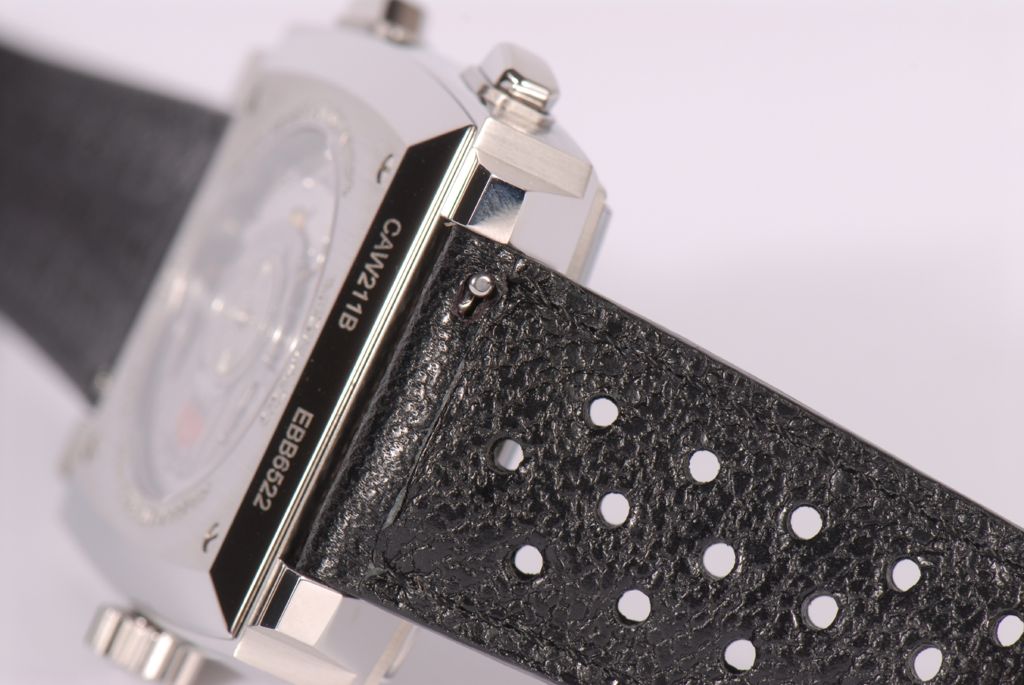