For many collectors, the TAG Heuer Monaco is all about heritage. It’s about Steve McQueen and that iconic blue square dial that gives off a 1970s motor racing vibe. And since 2003, you have been able to buy a modern TAG Heuer version of McQueen’s Monaco, a watch that is very faithful to the 1970s original. 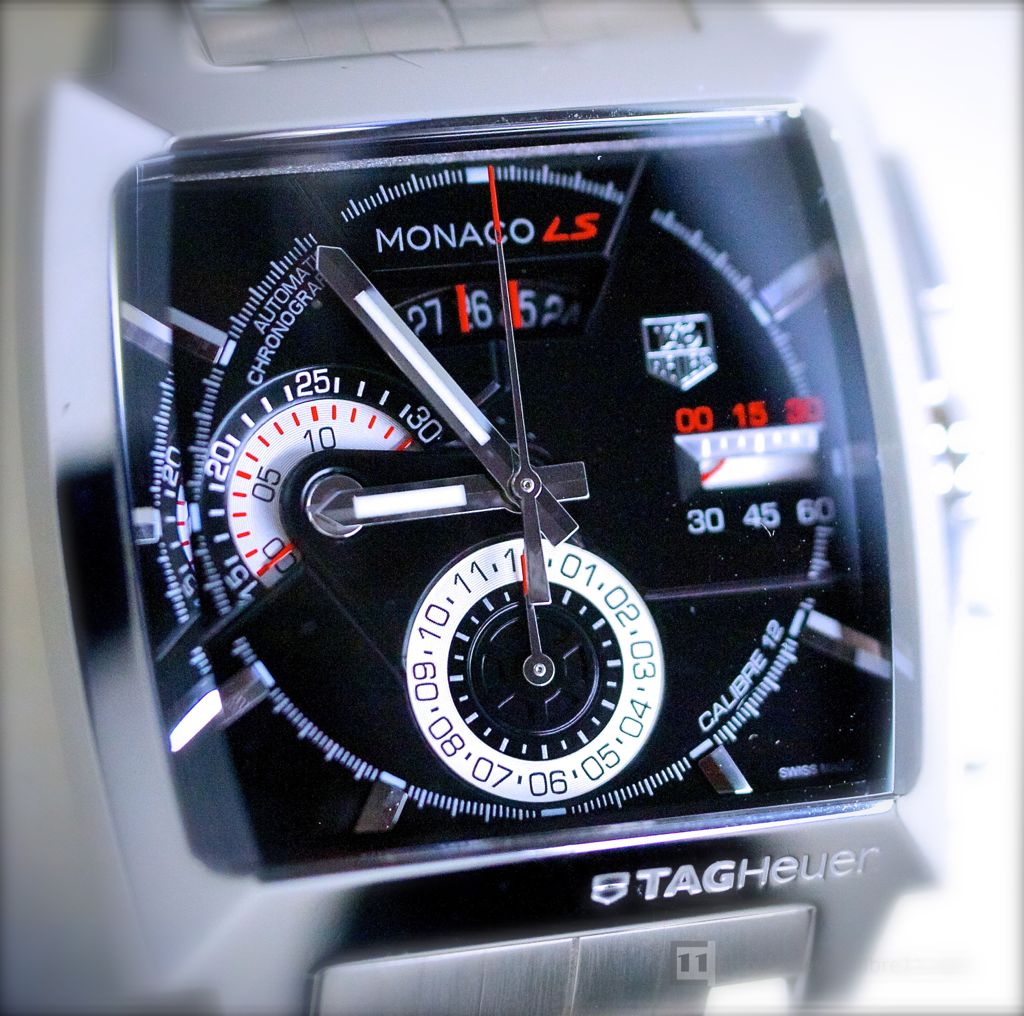 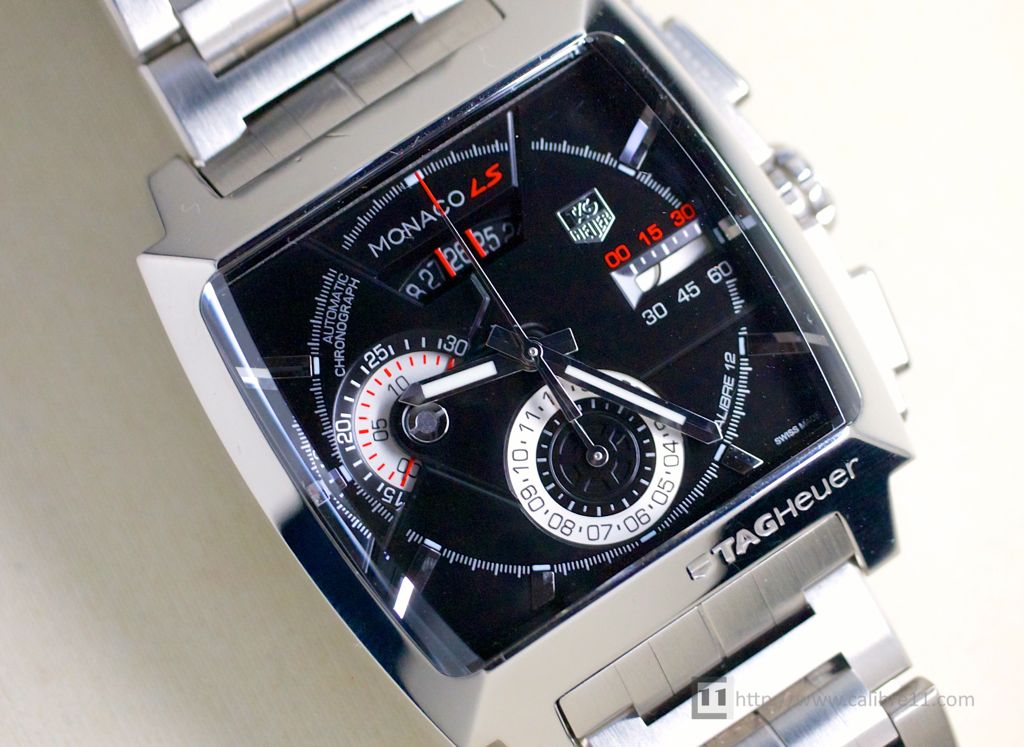 The LS Calibre 12 is a radical departure from the traditional Monaco look, with a complex, technical dial that uses a variety of sub-dials and TAG Heuer’s innovative “Linear System” (“LS”). Combined with a modern case that re-interprets the original square case, the Monaco LS Calibre 12 is one of the more distinctive models in today’s TAG Heuer’s line-up, despite having been on the market since 2009. 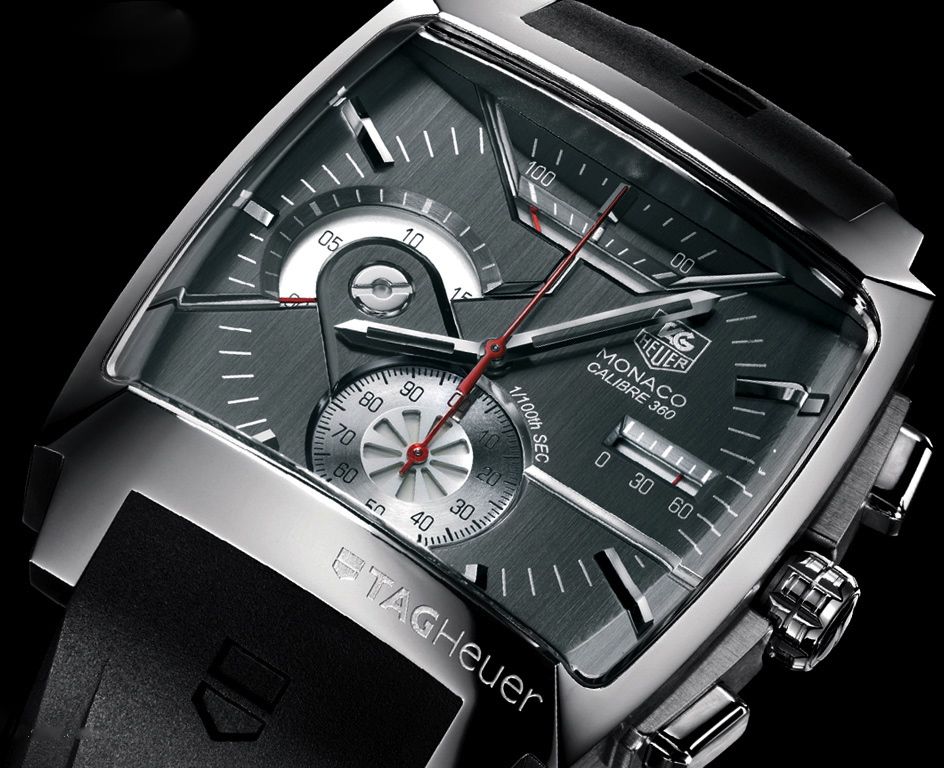 The Monaco Calibre 360 LS Concept watch was first shown at the Basel watch fair in 2006.  This was the third model (after the Vanquish and Carrera) to get TAG Heuer’s Calibre 360 movement, the world’s first 1/ 100th second movement.

The 360 LS brought together three key elements that TAG Heuer was working on- the Calibre 360 movement, the LS system and the “new generation” Monaco case borrowed from the Monaco V4. 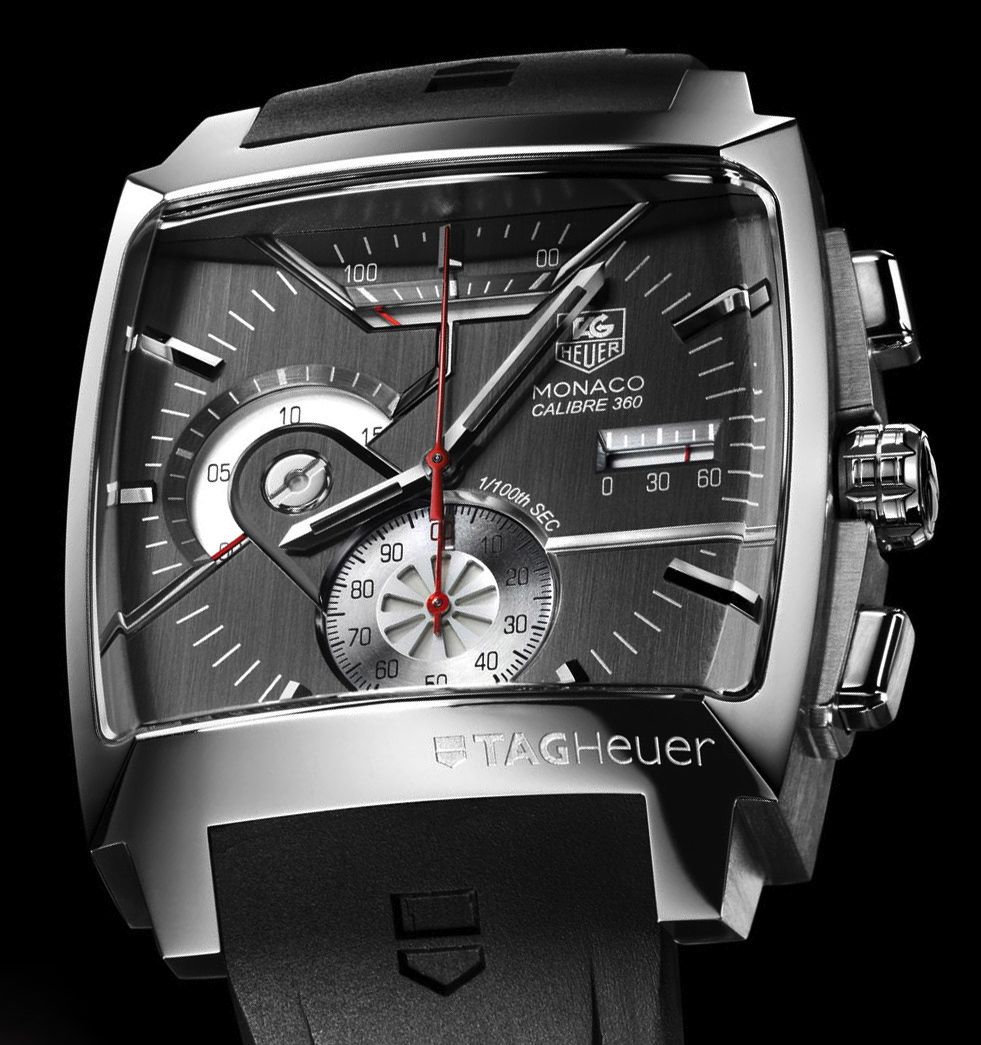 The Monaco 360 LS was the first TAG Heuer to use the LS system, which explores new ways of displaying timing information that you’d normally get from a traditional dial. The Grand Carrera was the first production series to use both the LS and “Rotating Disc” systems, but the idea came from the Monaco 360LS.

From Concept to Production 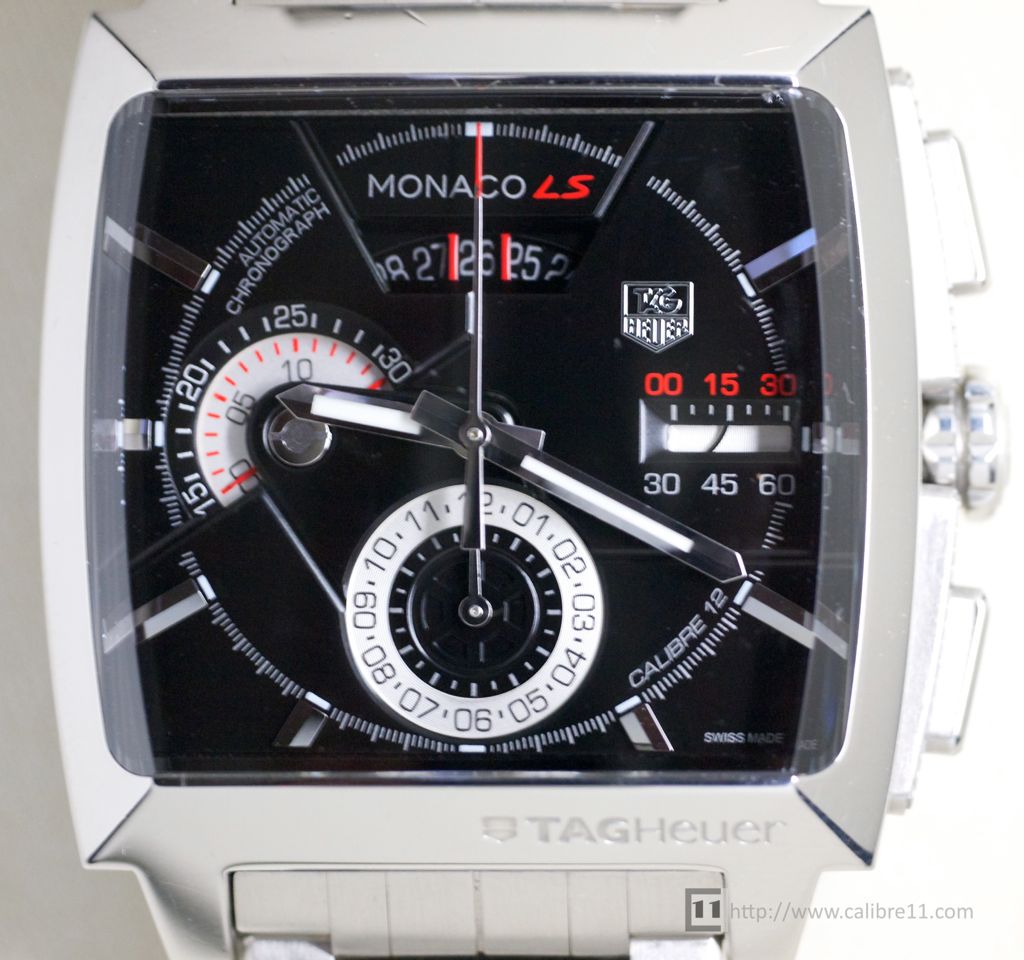 Despite being well received, the Monaco 360LS never made it into production, mainly because development of the Calibre 360 movement stopped shortly after TAG Heuer launched the Carrera 360 Series.

But, three years after the launch of the 360LS, TAG Heuer developed a production version of the watch, this time with the more prosaic Calibre 12 movement.

At first glance the 360LS and the LS Calibre 12 look very similar, but placed side-by-side you can see that several small details were changed between the concept and production watches.

Putting aside the differences in the movement, most of the changes are to the dial design. Gone is the sparse “gun-metal Grey” Anthracite face and in its place is a Black dial with additional details. The changes do rob the design of some of  its original elegance- it seems as though the designers did not know when to stop adding text to the dial. An example of this is the running seconds LS window at 3 o’clock, where the concept watch had “0, 30, 60” markings, the production watch has “0, 15, 30, 30, 45, 60”. 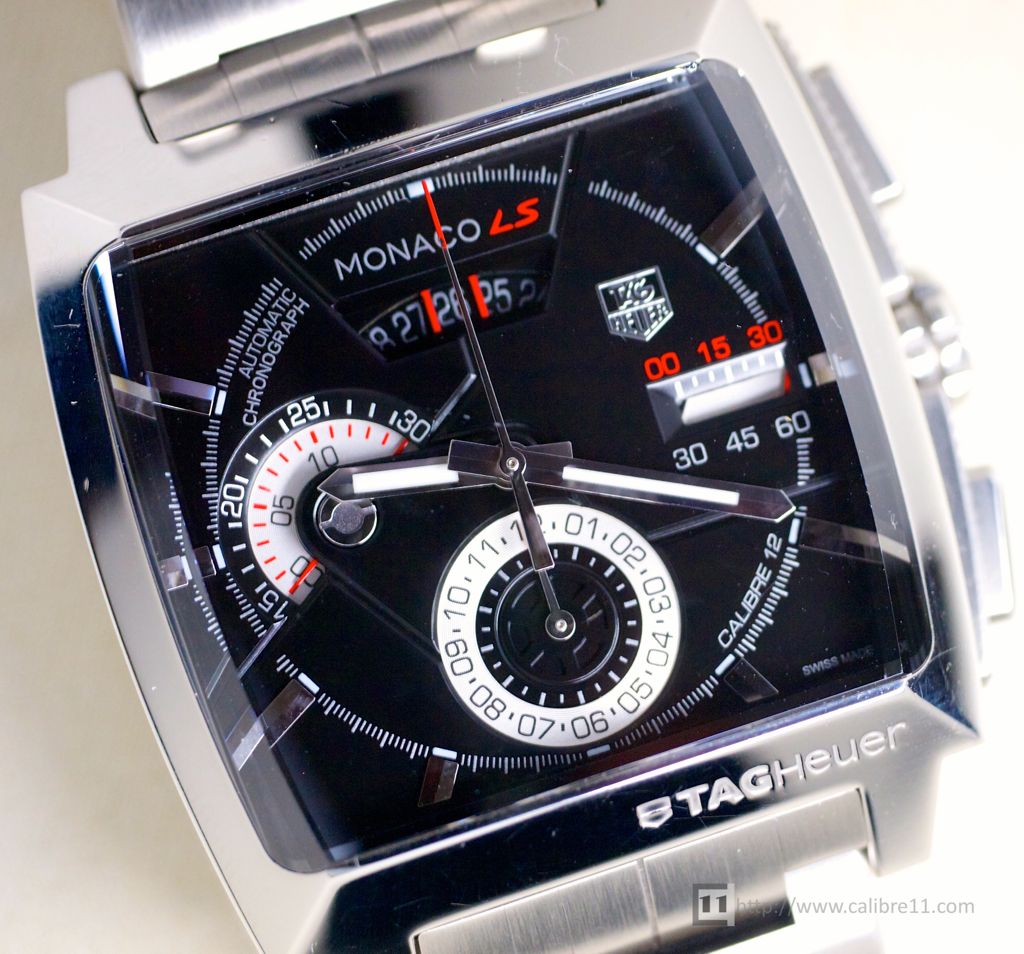 The case design is the same as the Monaco V4 and Twenty-Four models- a deep, 40.5mm diameter stainless steel case, with a crystal that wraps around to meet the side of the case. As you’ll see below, the case is no lightweight- the issue is not the diameter of the watch, but rather the thickness of the case. Despite this, the case itself is a masterful design and a great way of modernising the series. 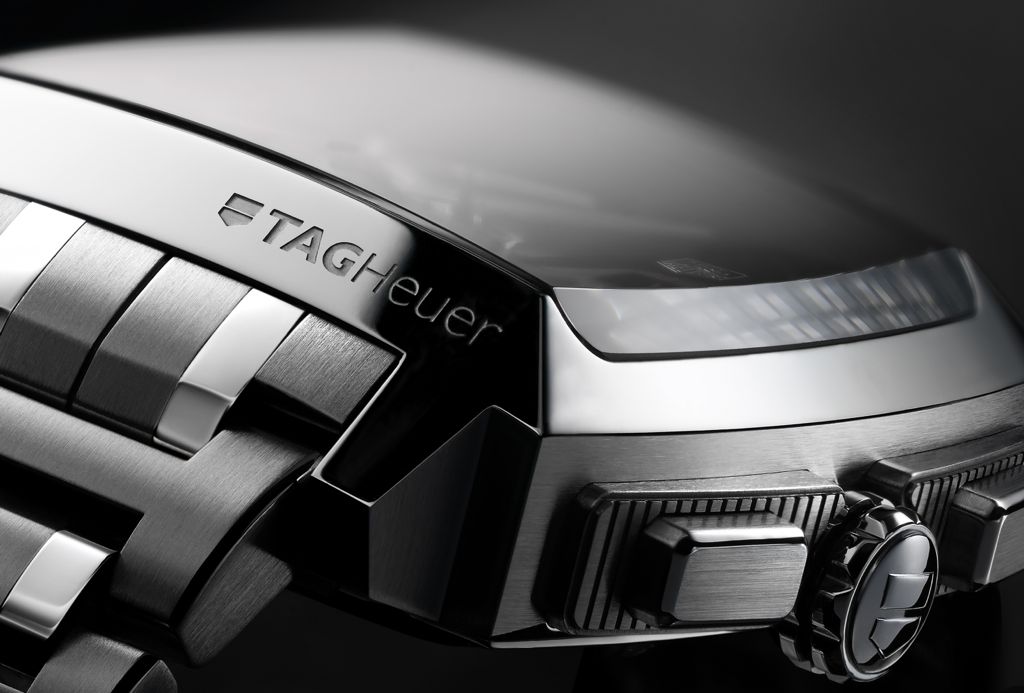 The side of the case has a brushed steel finish, while the top-section of the case and lugs are polished to a high-shine. You may notice a few marks on the example photographed below, which it’s important to note is not a new watch, but one that has been worn regularly for the last 12 months. 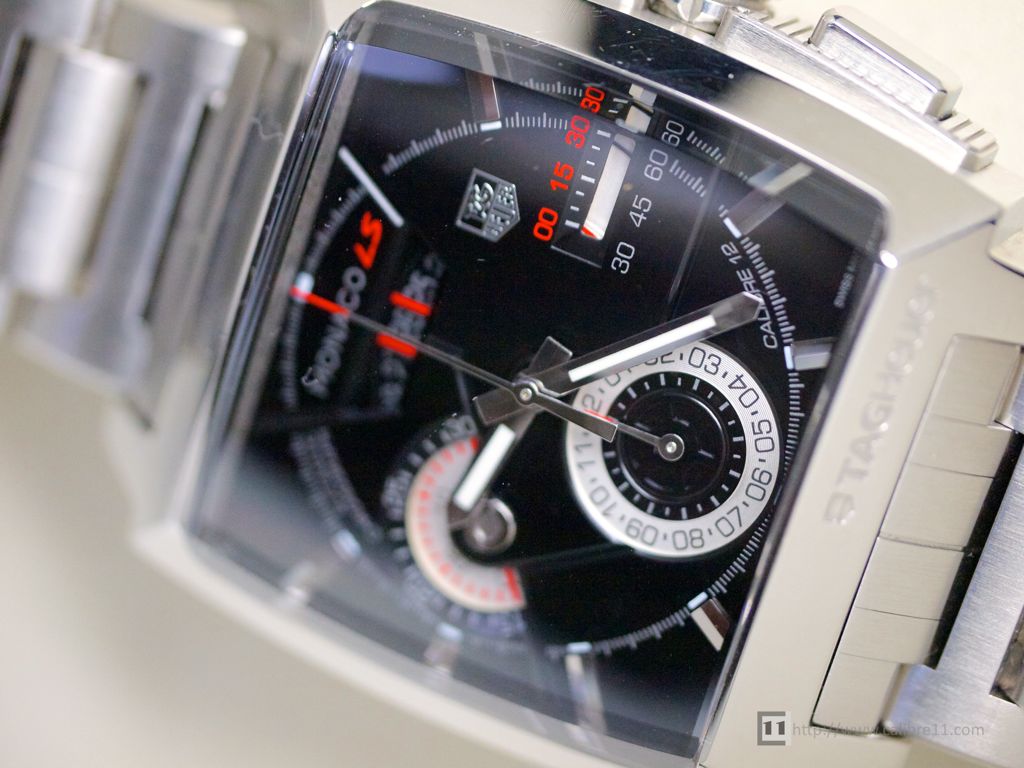 As noted above, many of the changes to the production Monaco LS are due to the Calibre 360 movement being replaced by the Calibre 12. The Calibre 12 movement is the same engine found inside the regular Monaco range since 2010 and is a “piggy-back” movement made up of an ETA/ Sellita watch base, with a Dubois Depraz 2008 Chronograph module.

The move to the Calibre 12 means that the power reserve indicator of the 360LS is lost (replaced by a date window), while the Chronograph measures to a precision of a single second, rather than to 1/ 100th second. 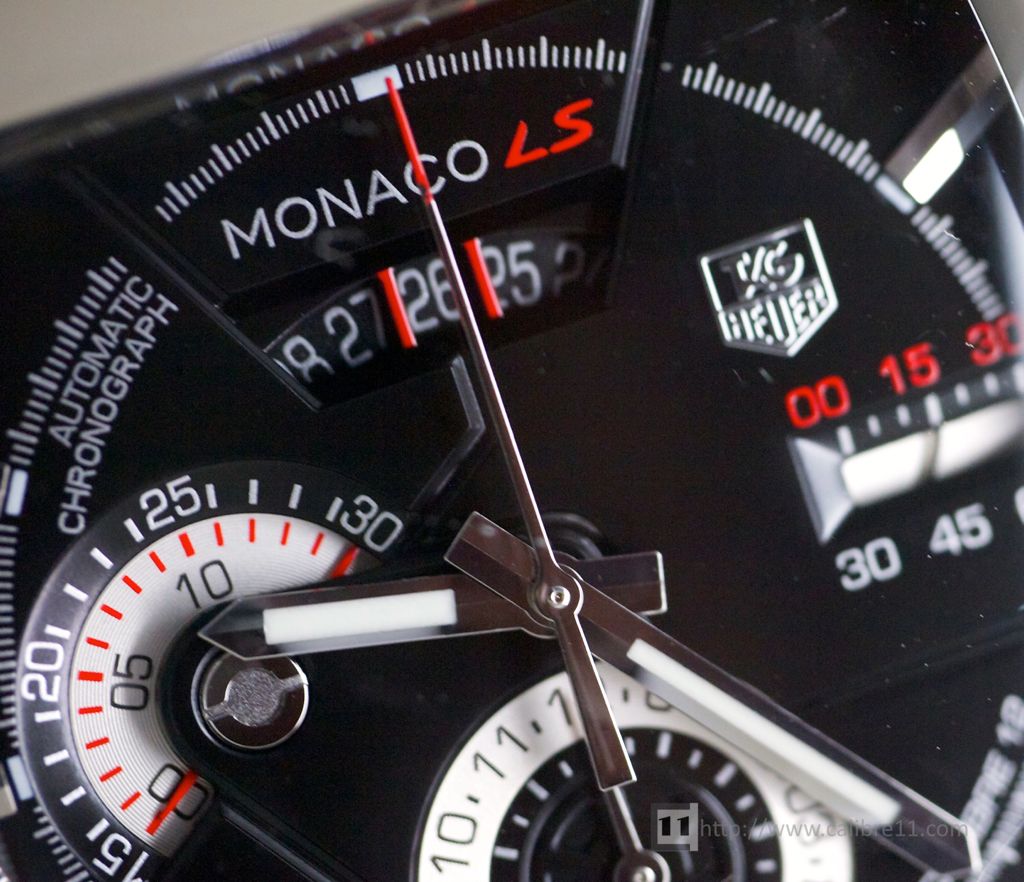 There are two LS windows on the Monaco LS, the first being the one used on the 9 o’clock sub-dial to show Chronograph minutes elapsed. Despite looking like the RS disc used on the Grand Carrera series, the semi-circular 9 o’clock “disc” does not rotate- rather the small “half-hand” Red indicator you see above splitting the”00″ marking rotates clockwise. 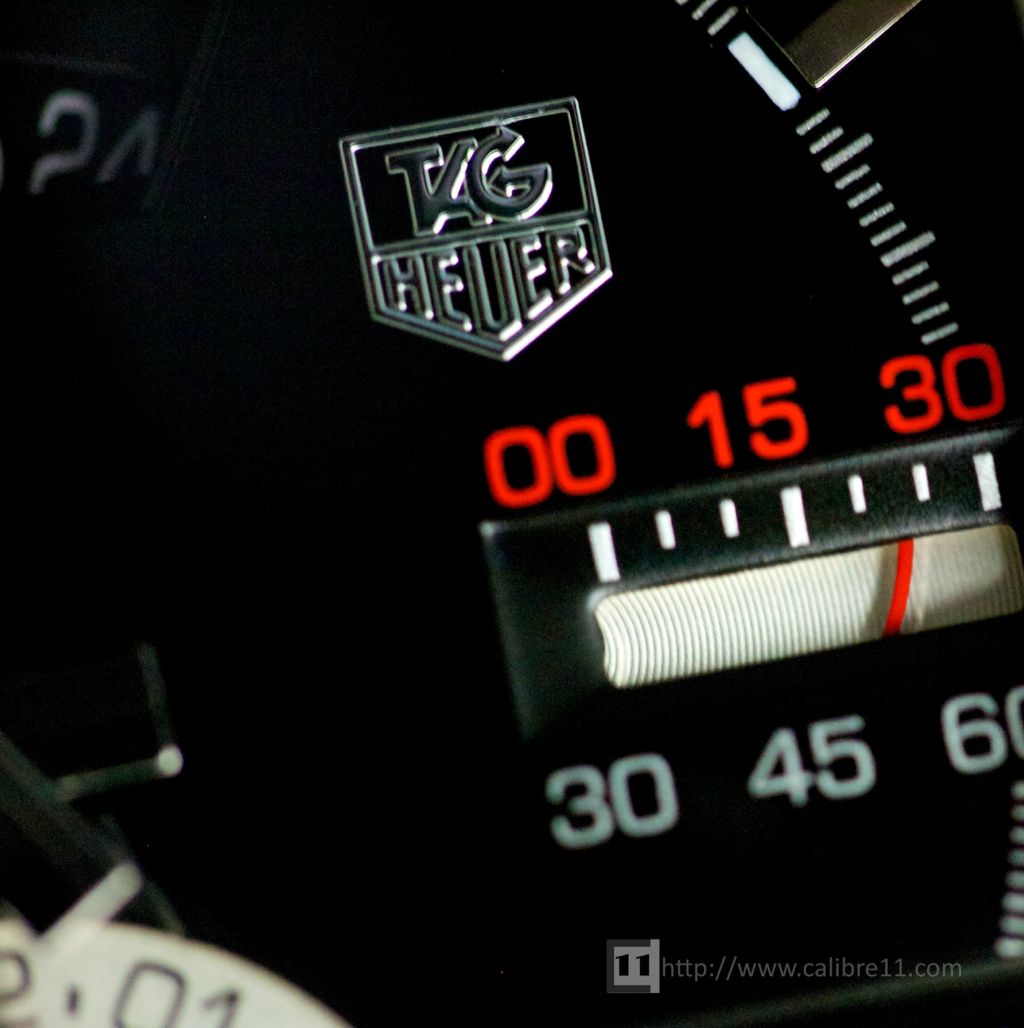 The second LS register is at the 3 o’clock position and is used to indicate elapsed seconds (time, not Chronograph). The LS disc is separated into two lines- a Red line that indicates 0-30 seconds, and then a black line that displays 31-60 seconds. The example above shows that 24 seconds have elapsed.

Showing elapsed seconds on the LS window takes up significantly less space than a traditional dial, but makes it harder to accurately read time. So a nice touch, but it’s form ahead of function. 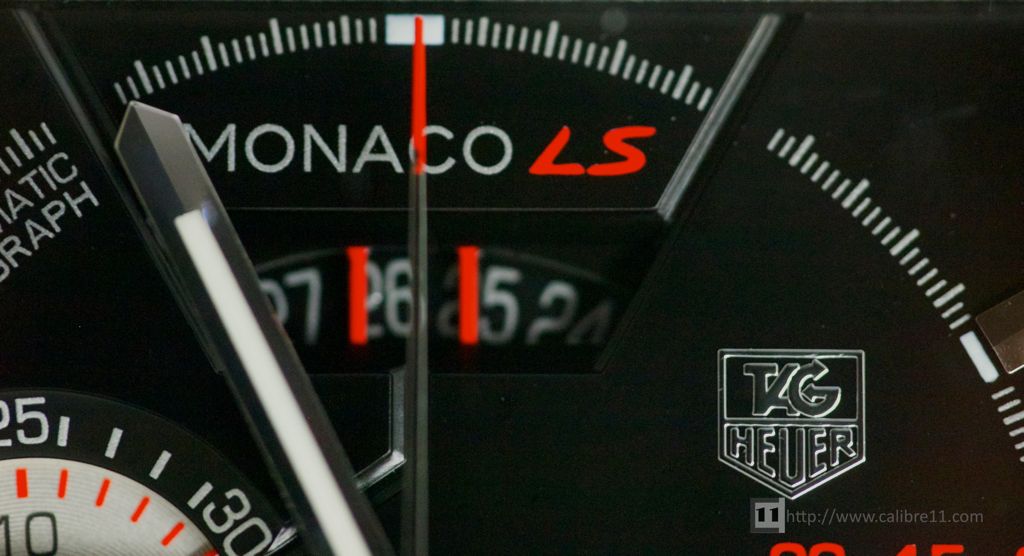 The final “window” on the dial is the date indicator that sits at the 12 o’clock position. This is a traditional date wheel that simply exposes more of the wheel, with today’s date being the one displayed between the two red lines. 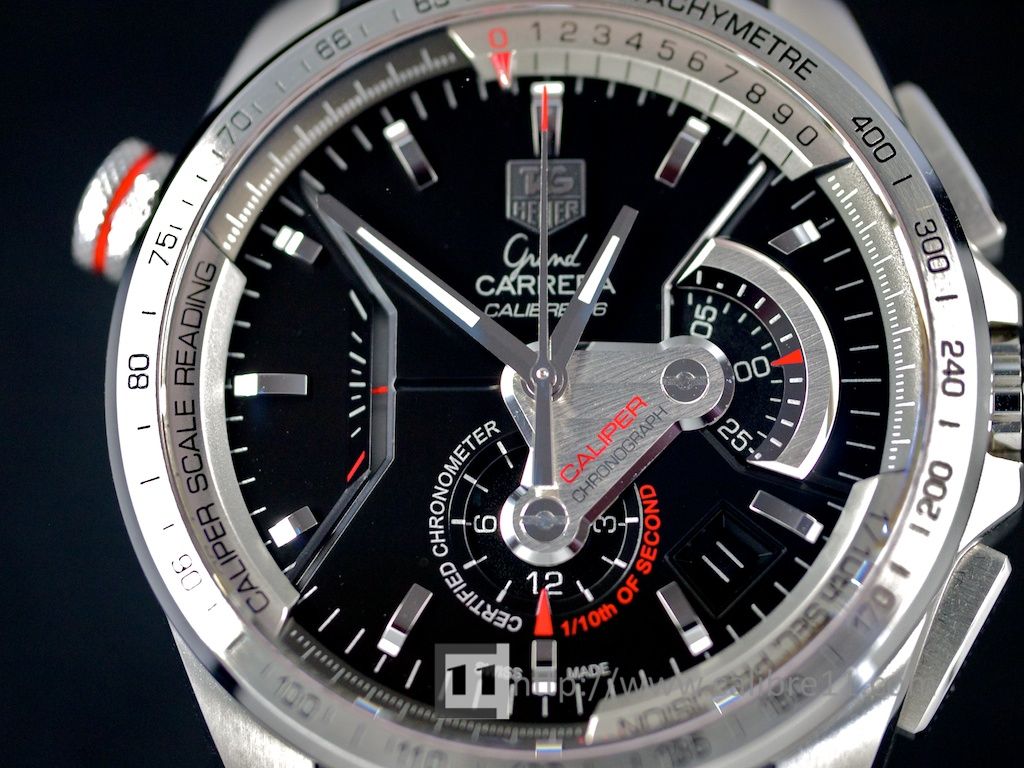 The Monaco LS is not the only watch in the TAG Heuer range to use these design flourishes, with many of these ideas being used on the Grand Carrera Calibre 36 RS2- a watch which takes the Monaco LS concept further by using the Rotating Disc system. 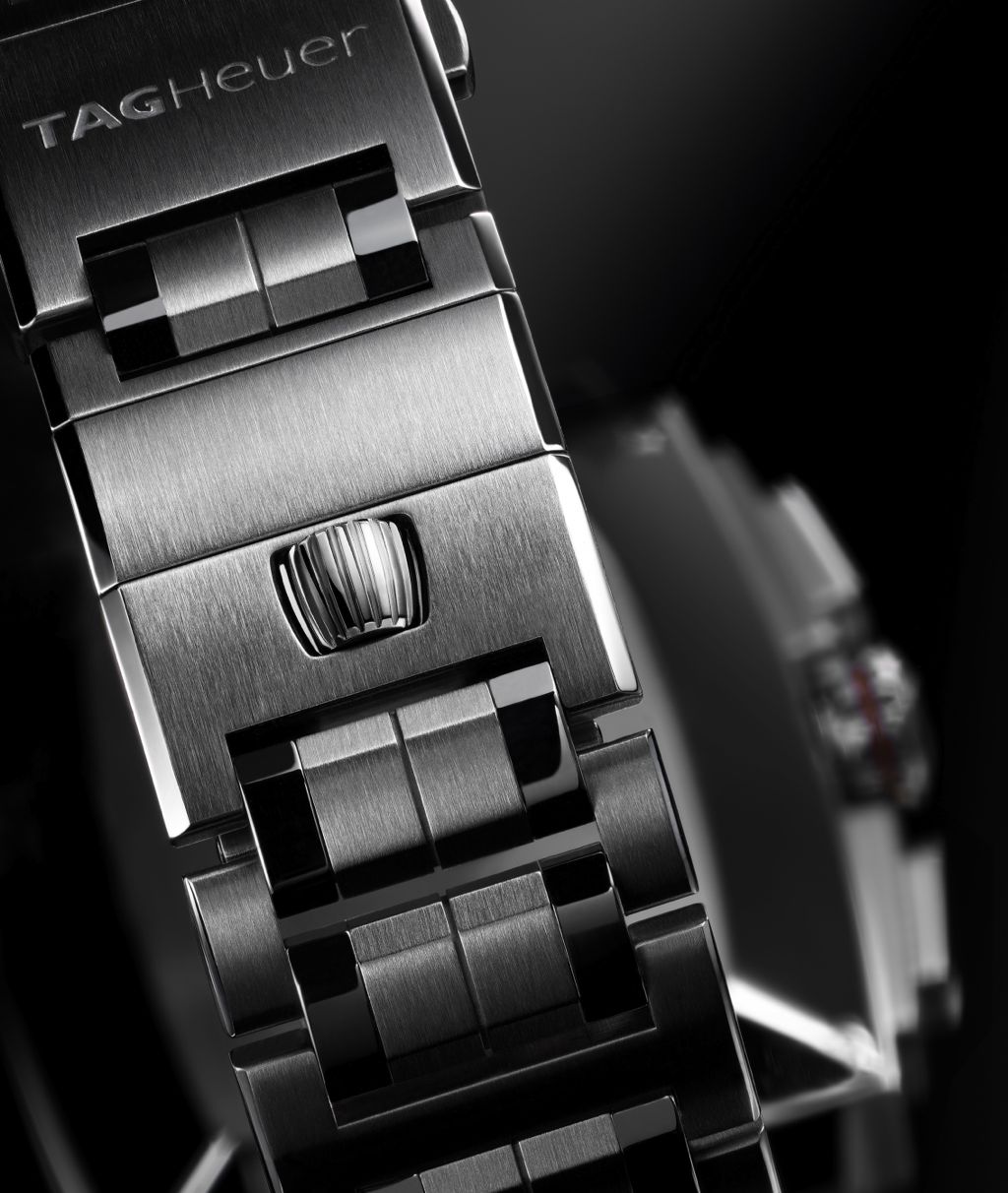 The rubber strap of the 360LS Concept was replaced by two options: a standard Alligator-Leather strap and a newly designed bracelet that pays homage to the vintage Heuer Monaco’s “Brick” style links.

The party trick of the bracelet is the micro-adjustment wheel that you see above, which can increase the length of the bracelet by about one inch, allowing for a perfect fit. It works brilliantly and it’s shame that we haven’t seen this feature make its way across other TAG Heuer models. 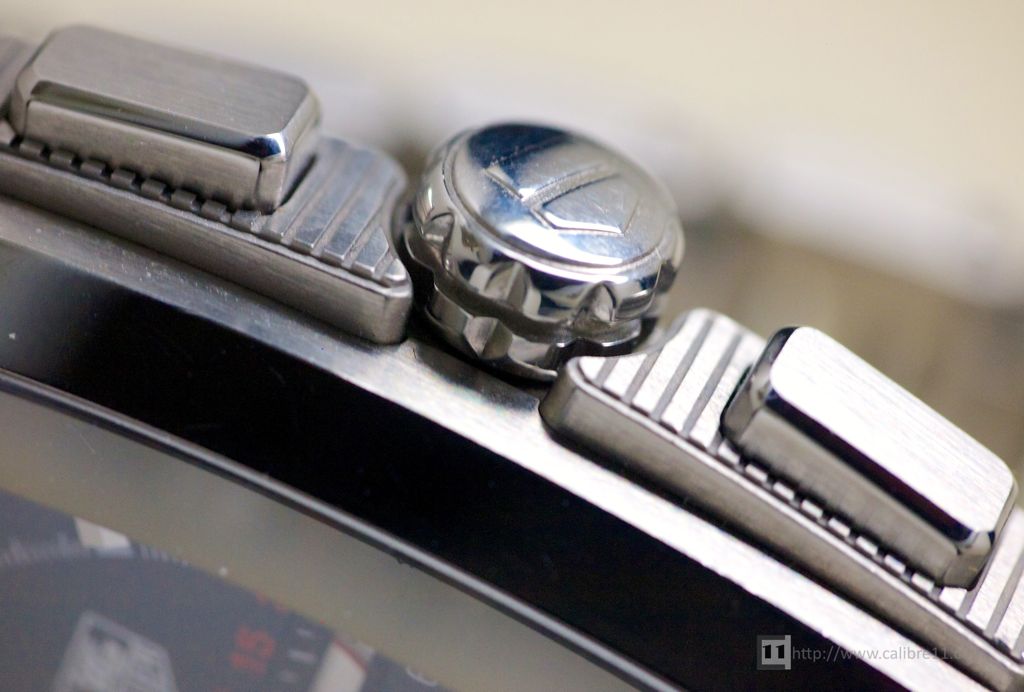 Another design flourish on the Monaco LS is the “Double-pusher” look given to the two Chronograph buttons. It does give a chunkier look in keeping with the rest of the design (and the double-crown”), but it does feel a little unnecessary. 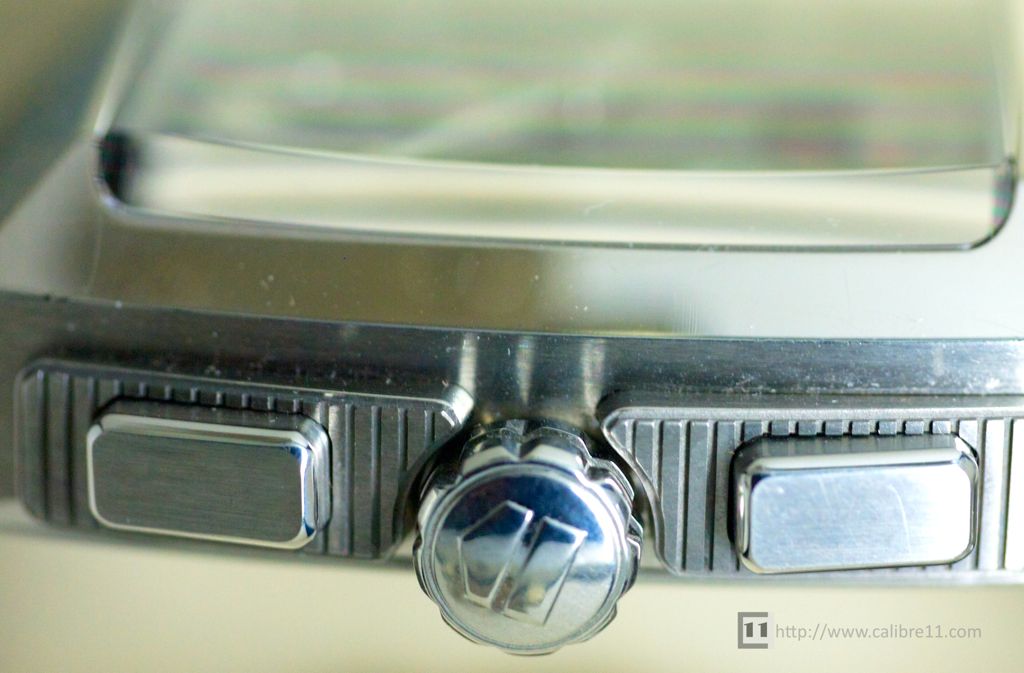 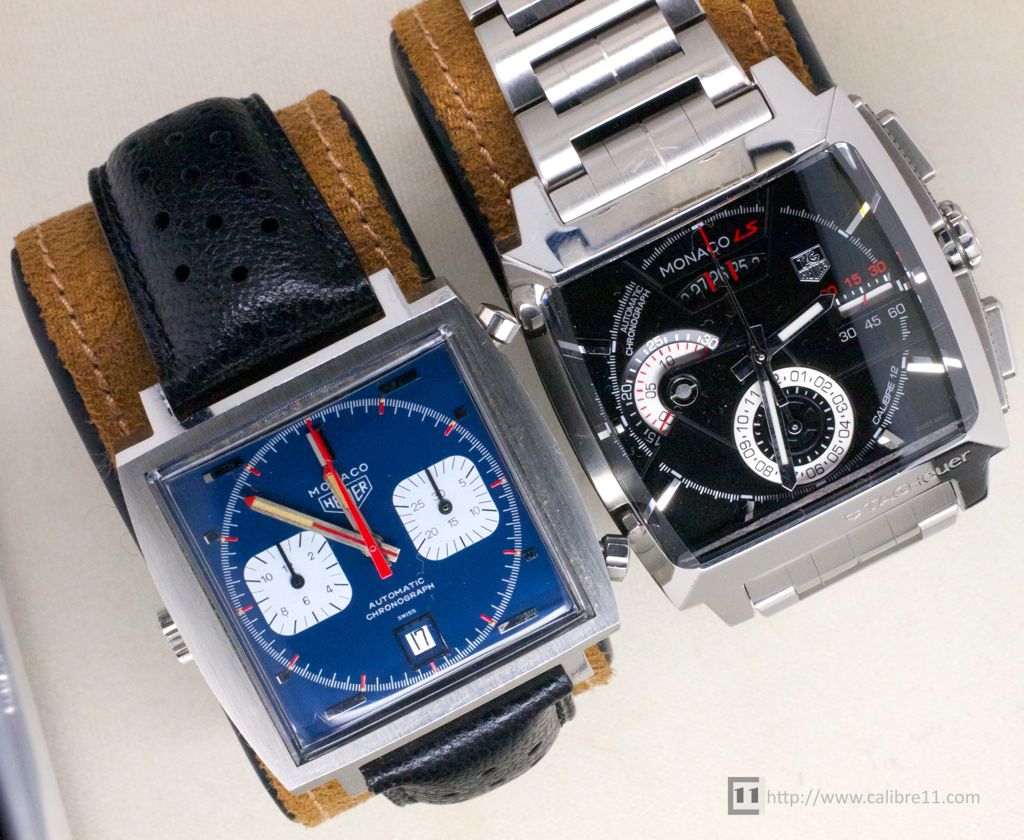 The Monaco LS does not pretend to retain the style of the traditional Monaco, as you can see when it’s placed next to a 1972 Heuer Monaco (above) and a 2005 Calibre 17 TAG Heuer Monaco (below). Probably the only consistent elements between the three watches are the white circular minute markings and the square case. 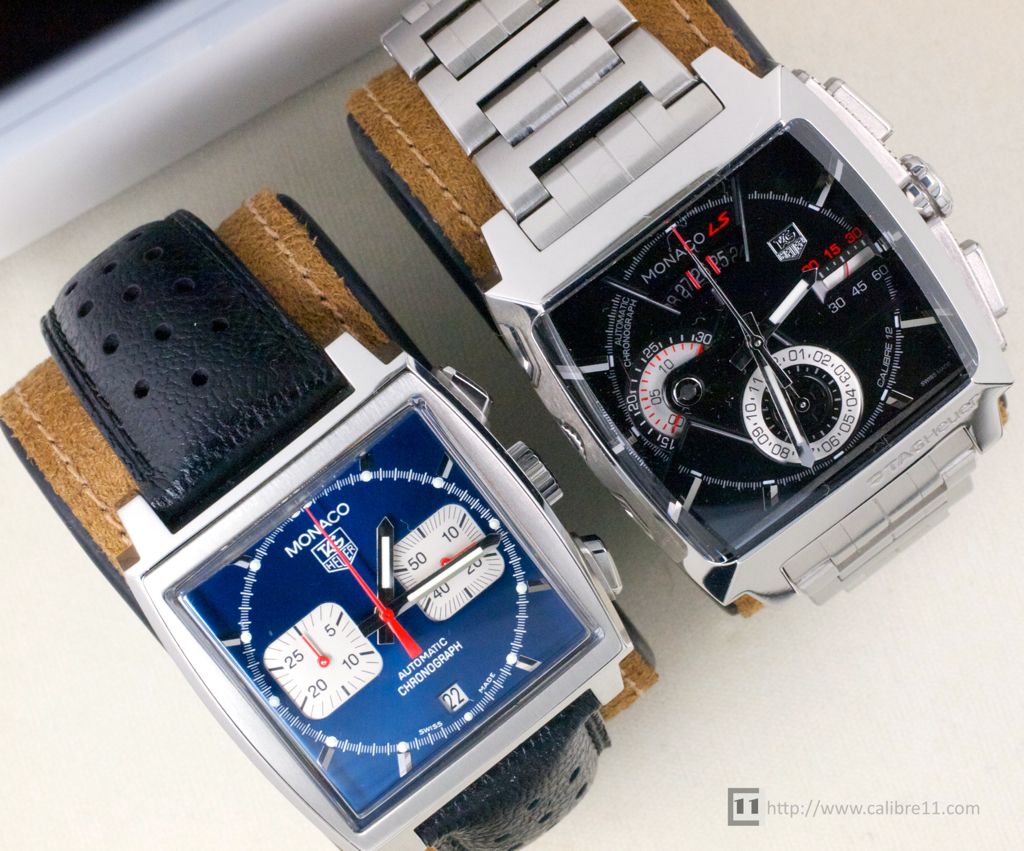 As noted earlier, the TAG Heuer Monaco LS is a large watch- take a look at the difference in thickness between the Calibre 17 Monaco and the Monaco LS. 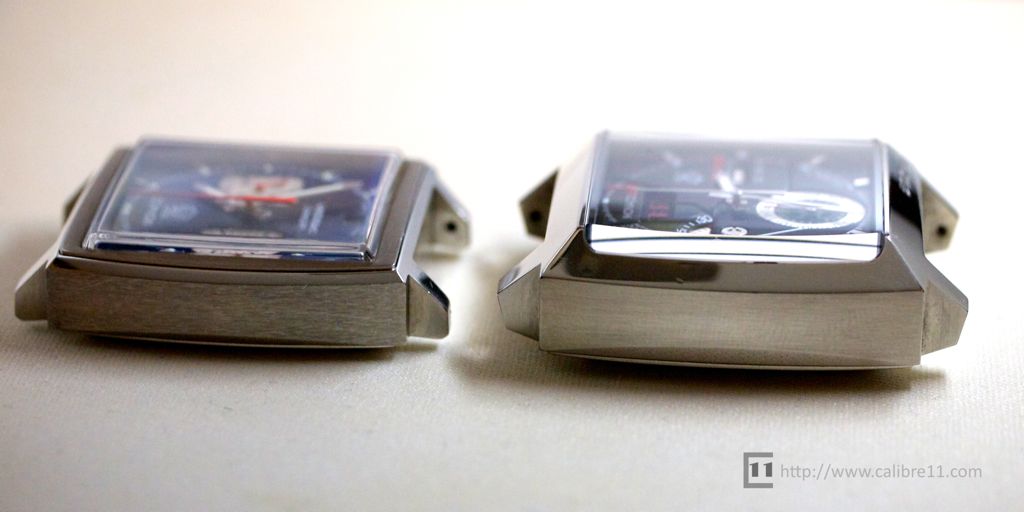 You can see that most of the difference is due to the angled upper-bezel and the wrap-around crystal. I love the look of the crystal, but there has to be a way to take out some of the heft of the “new generation” Monaco cases.

Of course, a larger watch is exactly what some buyers are looking for, so it’s worth trying on before you take the leap. 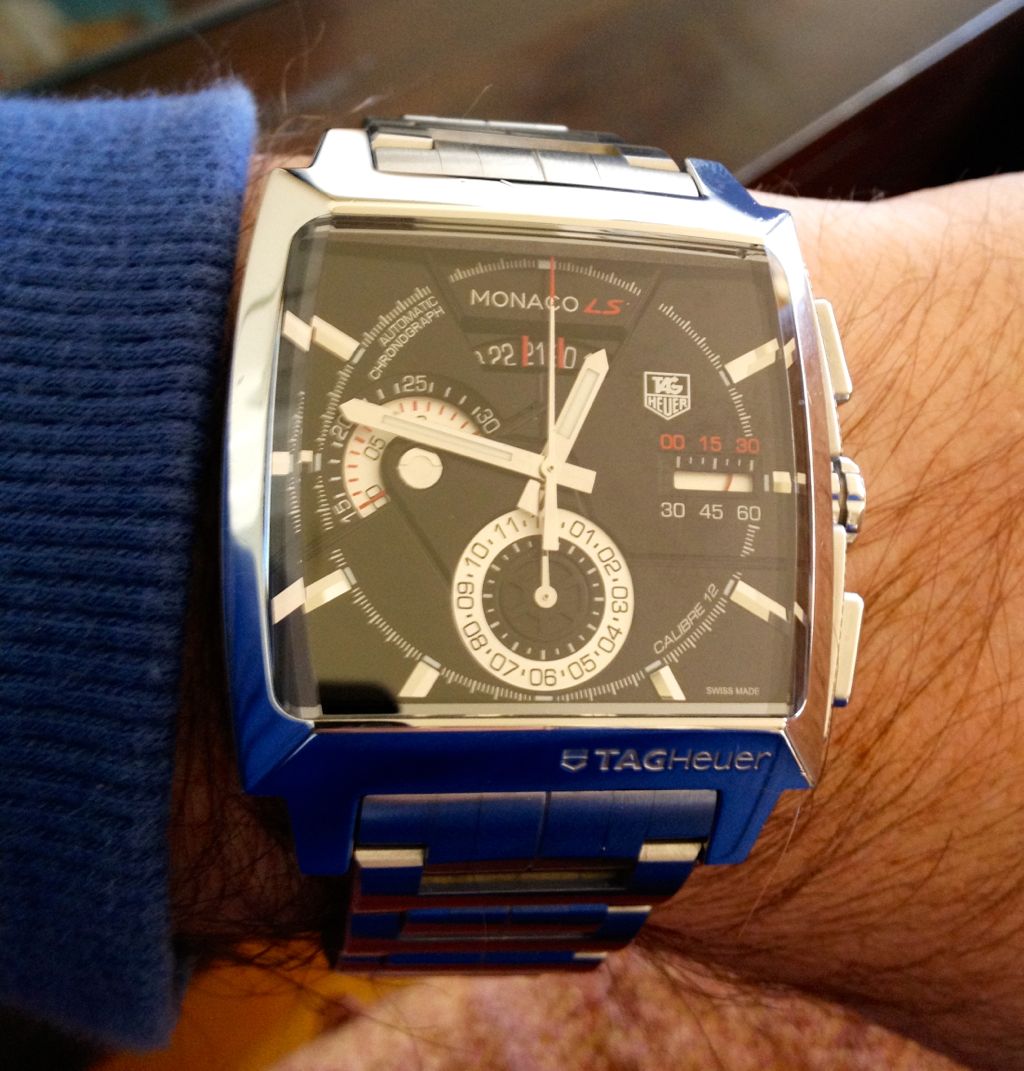 Consistent with the observation on the thickness of the case, it’s also a heavy watch. When wearing the watch I never felt that it looked too big on the wrist, but it did feel too bulky after wearing for several hours. Like many aspects of the Monaco LS, it will all come down to taste and what size watch you are used to wearing. 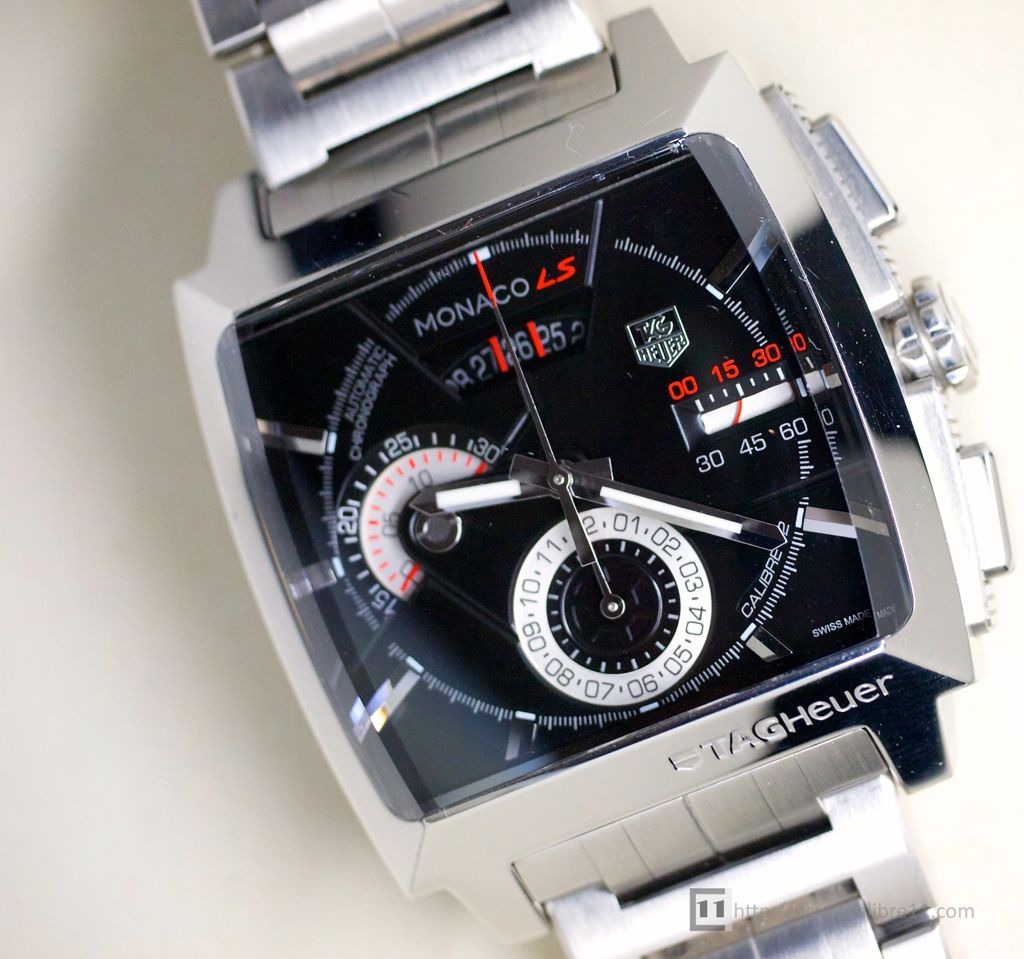 The TAG Heuer Monaco LS is one of those watches that will polarize collectors. Chances are that if you like the traditional vintage-style Monaco, this won’t be for you- too bulky, too busy and a little over-designed. Those who find the standard Monaco too old-fashioned will love the modern design and welcome the larger case size.

Personally, I am more drawn to the modern interpretations of the TAG Heuer Monaco than the re-edition designs- largely because I have a vintage Monaco in my collection, so a “new generation” Monaco offers something different. But the Monaco LS is not going to be that watch for me: While I love the case design, it’s the heft and dial that I find hard to bond with (whereas I like the dial on the 360 LS Concept).

TAG Heuer have only made one version of the Monaco LS, but I hope that they continue developing the series. There is room in the Monaco range for a Calibre 12 “new generation” model, ideally with a slightly thinner case and a more traditional dial. Priced between the Calibre 12 Monaco and the Calibre 36 Monaco Twenty Four, it would be a tempting proposition. 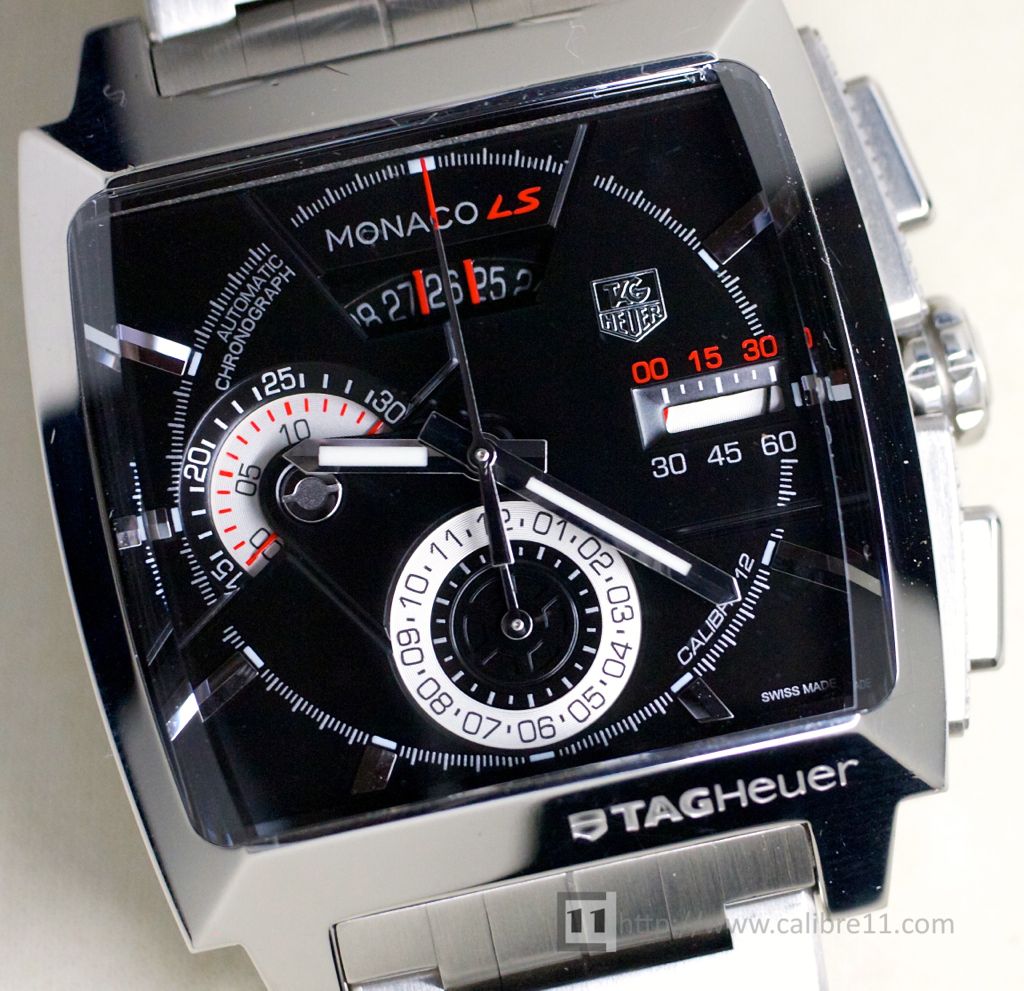