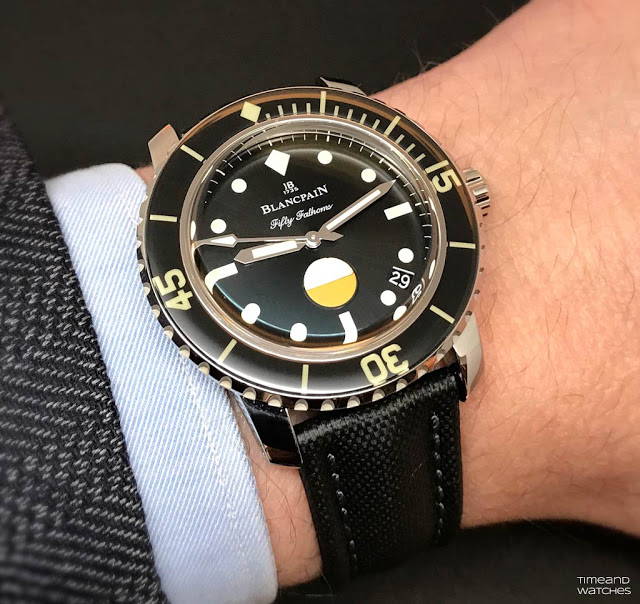 The Blancpain showcased its latest re-interpretation of one of its vintage pieces from the 1950s at Baselworld 2017, the Fifty Fathoms with a water-tightness indicator. 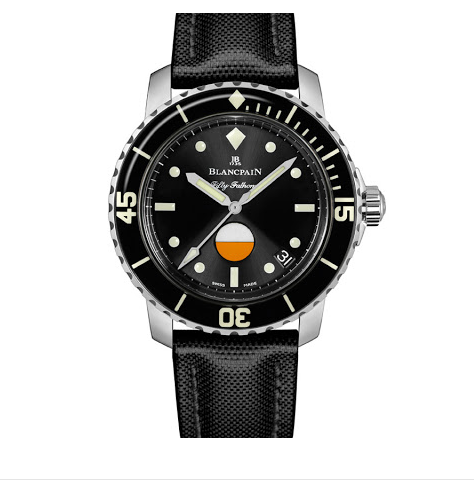 The history of Fifty Fathoms is strictly linked to Jean-Jacques Fiechter a passionate diver who was Blancpain’s CEO for three decades, 1950-1980 as well as to Captain Robert “Bob” Maloubier and Lieutenant Claude Riffaud, founders of the French Navy’s combat swimmers corps and who were searching for a reliable watch for their underwater missions.

In the 1950s, as head of Blancpain, Jean-Jacques Fiechter tasked his watchmaking team with addressing the challenges of measuring time in the underwater environment.

To improve water resistance, they conceived a double sealed crown system to protect the watch from water penetration in the event that the crown were accidently to be pulled during a dive. The presence of the second interior seal worked to guarantee the timepiece’s water tightness. A patent was registered for this invention.

A second patent was awarded for the sealing system for the caseback. This had indeed been a recurring problem with other pre-existing systems because of the way in which the “O” ring, used to seal the caseback, might become twisted when the back was screwed into the case. In order to eliminate this risk, Fiechter invented a channel into which the “O” ring would be inserted and held in position by an additional metallic disk.

He then addressed another problem: a secured rotating bezel that could be used to measure the time of a dive. Fiechter perfected a blocking mechanism which would prevent accidental rotation of the bezel. For this he received another patent. 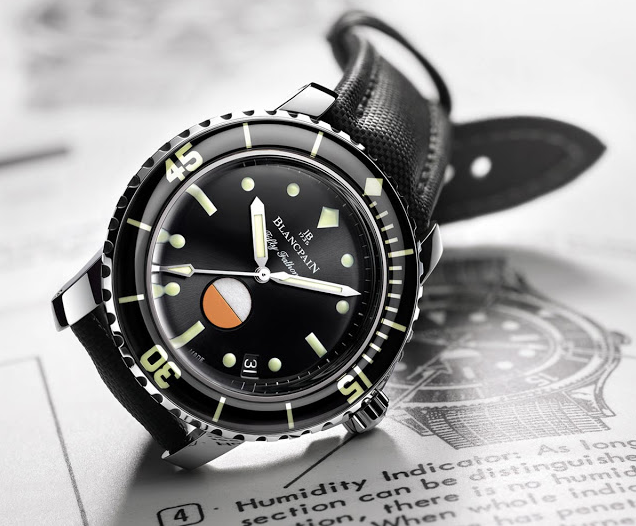 In 1953, Blancpain was able to deliver to the French team composed by Bob Maloubier and Claude Riffaud a watch for testing that fully met their strict criteria. The watch became one of the essential pieces of equipment for the French combat swimmers corps. Later, the same occurred for naval forces around the world. It was a unique timepiece: the Fifty Fathoms.

Jean-Jacques Fiechter continued with his quest for absolute diver safety and soon incorporated an additional feature for his watches: a circular water-tightness indicator. If, by chance, liquid were to leak into the watch case, a disk at 6 o’clock would signal the problem by changing its color from white to red.

This water-tightness indicator was present on the dial of the Fifty Fathoms model called the MIL-SPEC 1, which was introduced in 1957-58.

The new Tribute to Fifty Fathoms MIL-SPEC features the entire set of technical characteristics of a watch dedicated to diving, established by the original 1953 Fifty Fathoms and later followed by the entire watch industry. 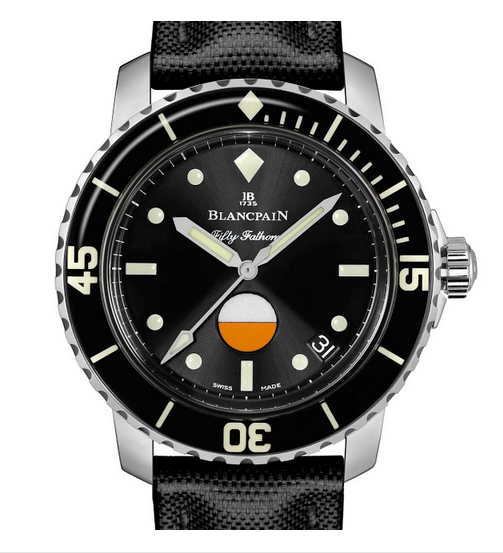 Its black dial features indexes in Super-LuminNova and the distinctive  water-tightness indicator. The unidirectional rotating bezel covered in scratch-resistant sapphire, a Blancpain innovation which first appeared in 2003 with the 50th Anniversary Fifty Fathoms, protects the luminescent indications underneath.

The new model is fitted with Blancpain’s in-house automatic winding caliber 1151, comprising 210 components including two series-coupled mainspring barrels and offering a four-day power reserve. Nestled into its stainless steel 40 mm case, the movement as well as its solid gold winding rotor with a NAC coating (a platinum alloy) and Blancpain logo, are visible through the clear sapphire case back. The balance-spring is in silicon, a material that offers many advantages. Firstly, its low density makes it lighter and thus more shock-resistant. In addition, it is highly resistant to magnetic fields. The resulting balance spring is ideally shaped, thereby ensuring improved isochronism performance of the movement, resulting in enhanced timekeeping precision. 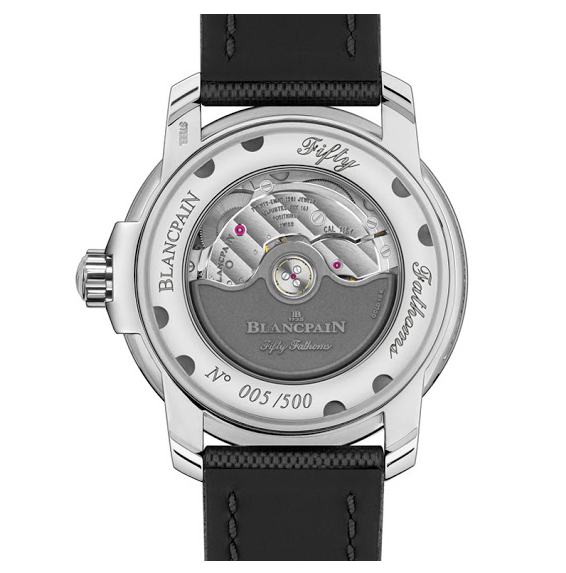 This timepiece is water resistant to 30 bar, which is equivalent to 300 meters. It is limited to 500 examples and is offered with a NATO strap, sail cloth strap, or steel bracelet with a secure buckle.