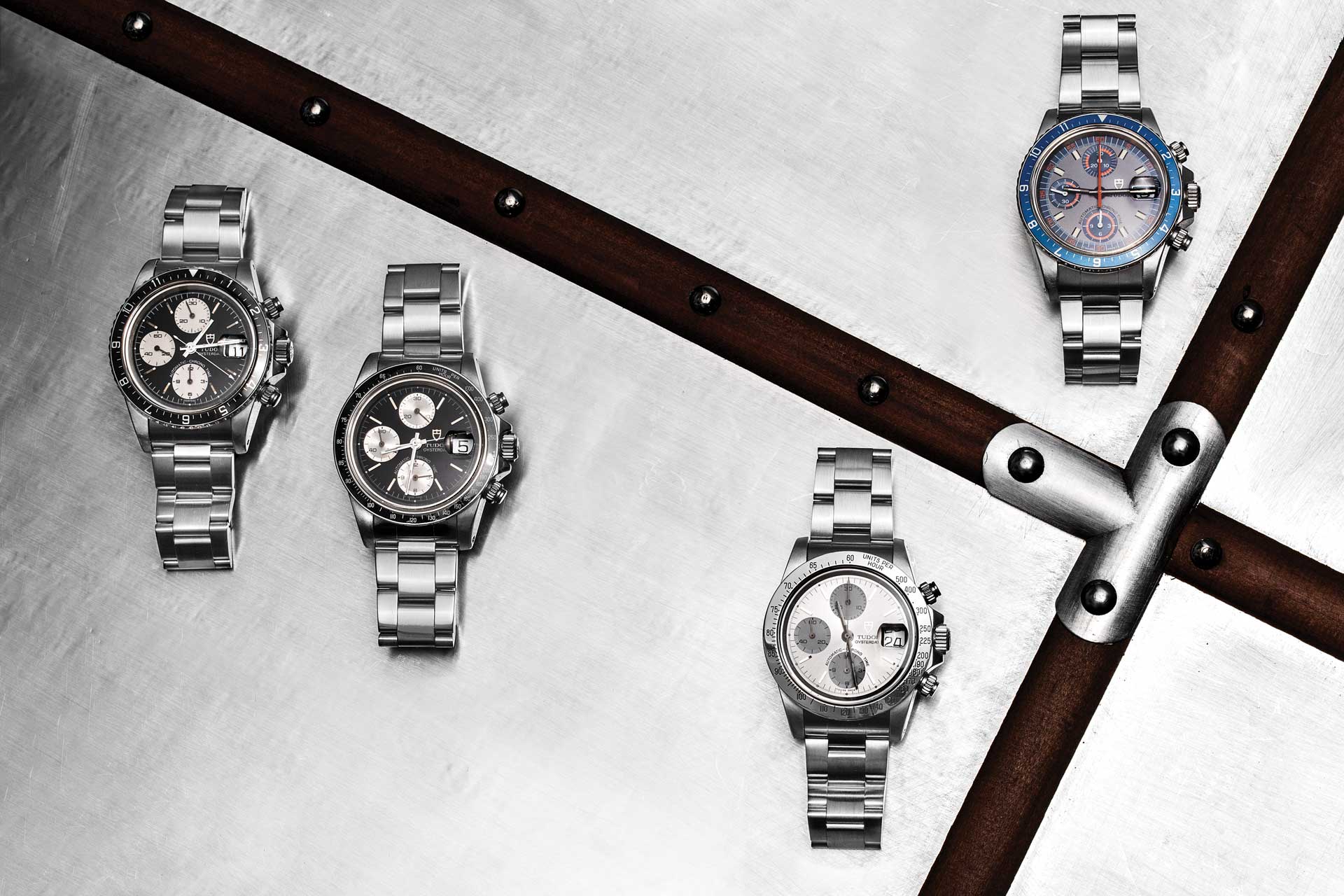 What makes a “hot watch” or a “watch hot”? There isn’t really a simple answer to this question as rarity, dealer-hype, key auction results, trends and clever marketing all have an impact. The vintage watch world moves in phases as different models, case sizes or complications become the focus and the spotlight has recently been on chronographs – as was spectacularly highlighted by the Phillips Start, Stop, Reset auction in May this year.

There were some record prices set across a wonderfully comprehensive selection of the world’s most important chronographs… and, of course, Revolution was delighted to see a Tudor amongst the offerings. Tudor has become one of the aforementioned hot watches of the past few years – from the revamped branding and launch of the Heritage line in 2010 through to the significant rise in interest (and prices) of the vintage pieces. There is no ignoring the fact that the little brother in the Wilsdorf family has come of age.

The Tudor back catalogue is as rich as it is diverse, but the two stars of the vintage show are the chronographs and the submariners. Both watches went through significant developments and incarnations over the years and for collectors there are a multitude of different styles and options to choose from. Here, we will focus on the chronographs and, in particular, the third series that were given the name “Big Block” by collectors. 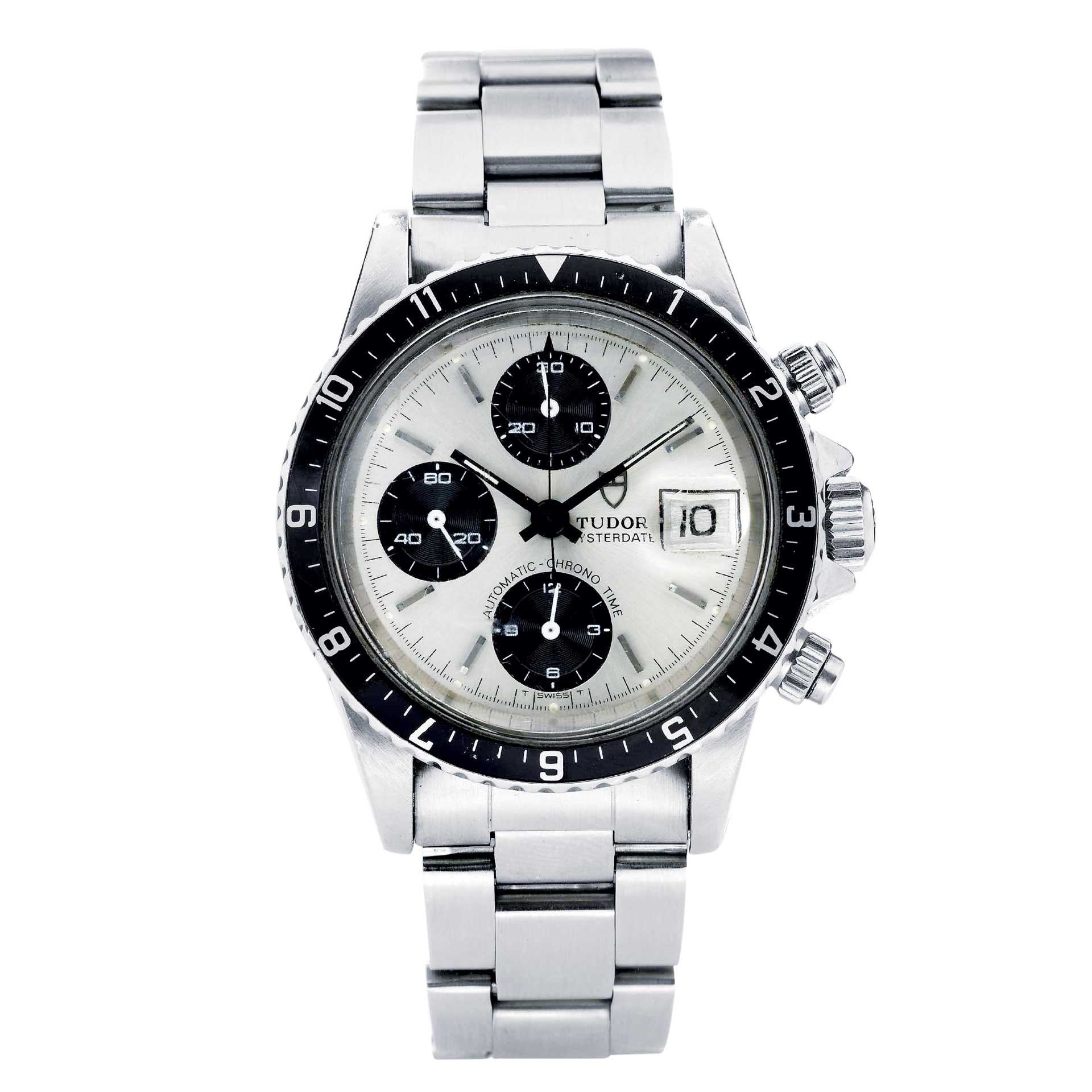 The Tudor chronographs story began in 1970 with the launch of the refs. 7031 and 7032 Homeplate (so called due to the hour markers resembling the home plate on a baseball field). These watches featured manual-wind movements and were housed in relatively large size cases for that era at 39mm. The distinctive dial layout featured bright orange accents against a black and grey background, which was the beginning of Tudor’s daring use of colour in its chronograph watches. The following year – 1971 – witnessed the second incarnation of Tudor chronos, the 7100 series. These were again manual-wind watches in similar sized large cases, and it was this series that ultimately became known by collectors as the Monte Carlos, due to the dial’s resemblance to a casino roulette wheel. 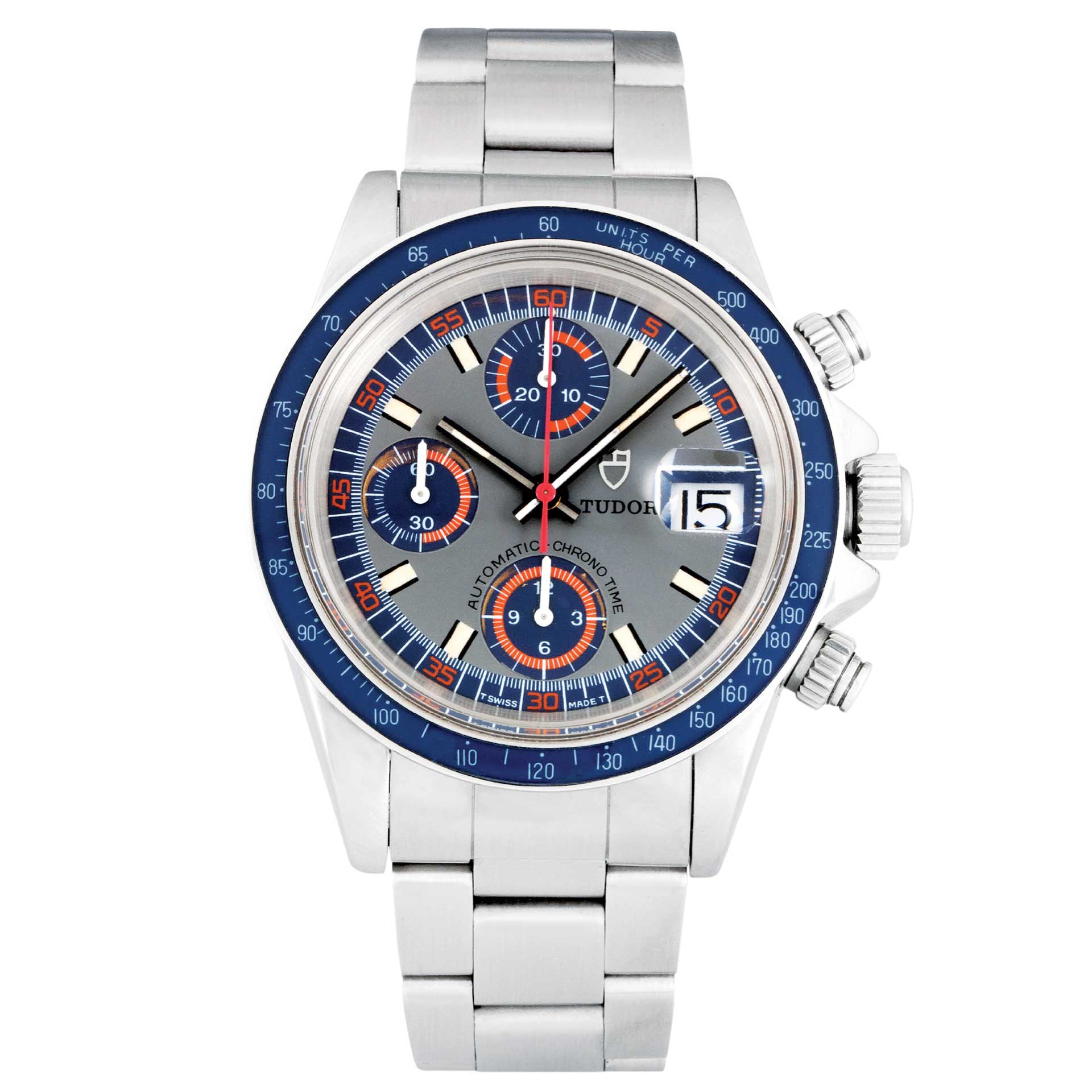 The precedent had now been set for colourful dials that would continue to be a feature of Tudor chronographs. Introduced in 1976, the third series of chronographs saw Tudor take a big leap, in terms of innovation, and from now on the watches would feature automatic movements, making the Big Blocks the first self-winding chronographs from the Wilsdorf group – over a decade before Rolex introduced their first automatic Daytona chrono, the Zenith-powered ref. 16520. This was a real coup for Tudor and put them ahead of other chronograph manufacturers of the era.

And it was precisely this new innovation that led to the name “Big Block”. The rotor of the self-winding mechanism meant that Tudor needed to redesign the case and make it deeper, hence the now-familiar collectors’ term attached to the watch. In fact, until the introduction of the Sea-Dweller Deep Sea, it was the biggest watch to come out the Rolex factory. The other major change that occurred with the Big Block was the introduction of a third chronograph register on the dial: an hour indicator. The previous two series were effectively 45-minute stopwatches, but the new watches could measure much longer periods of time. 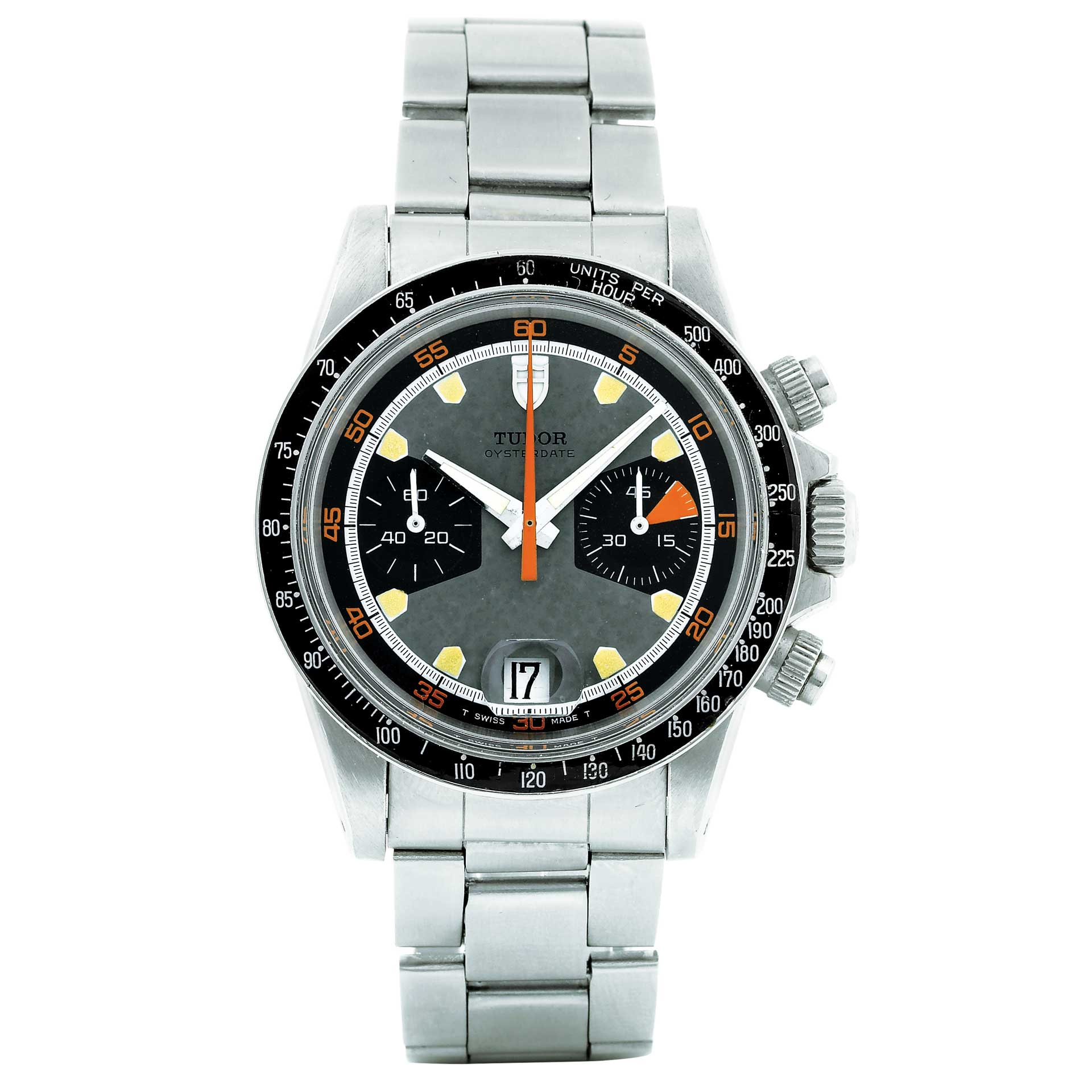 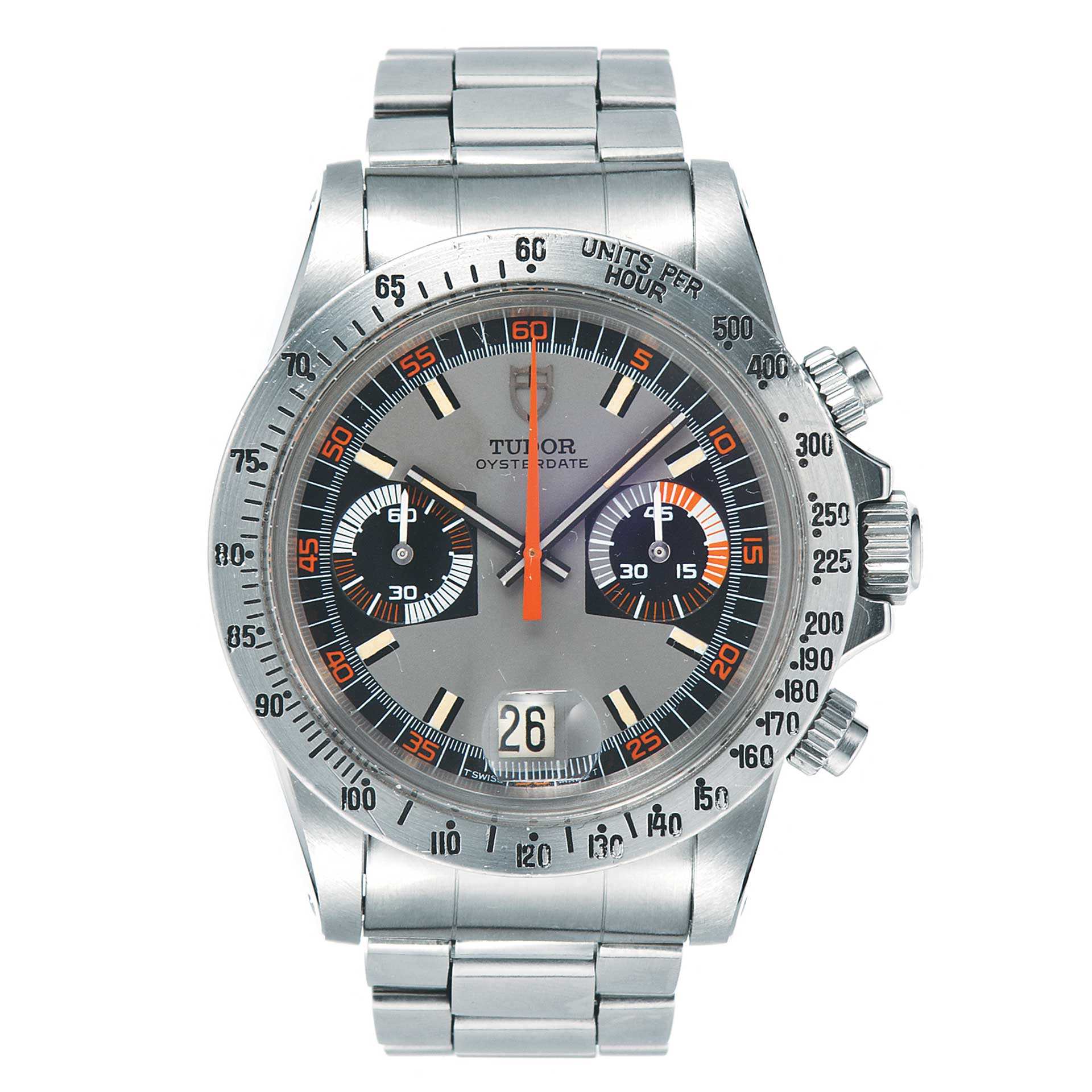 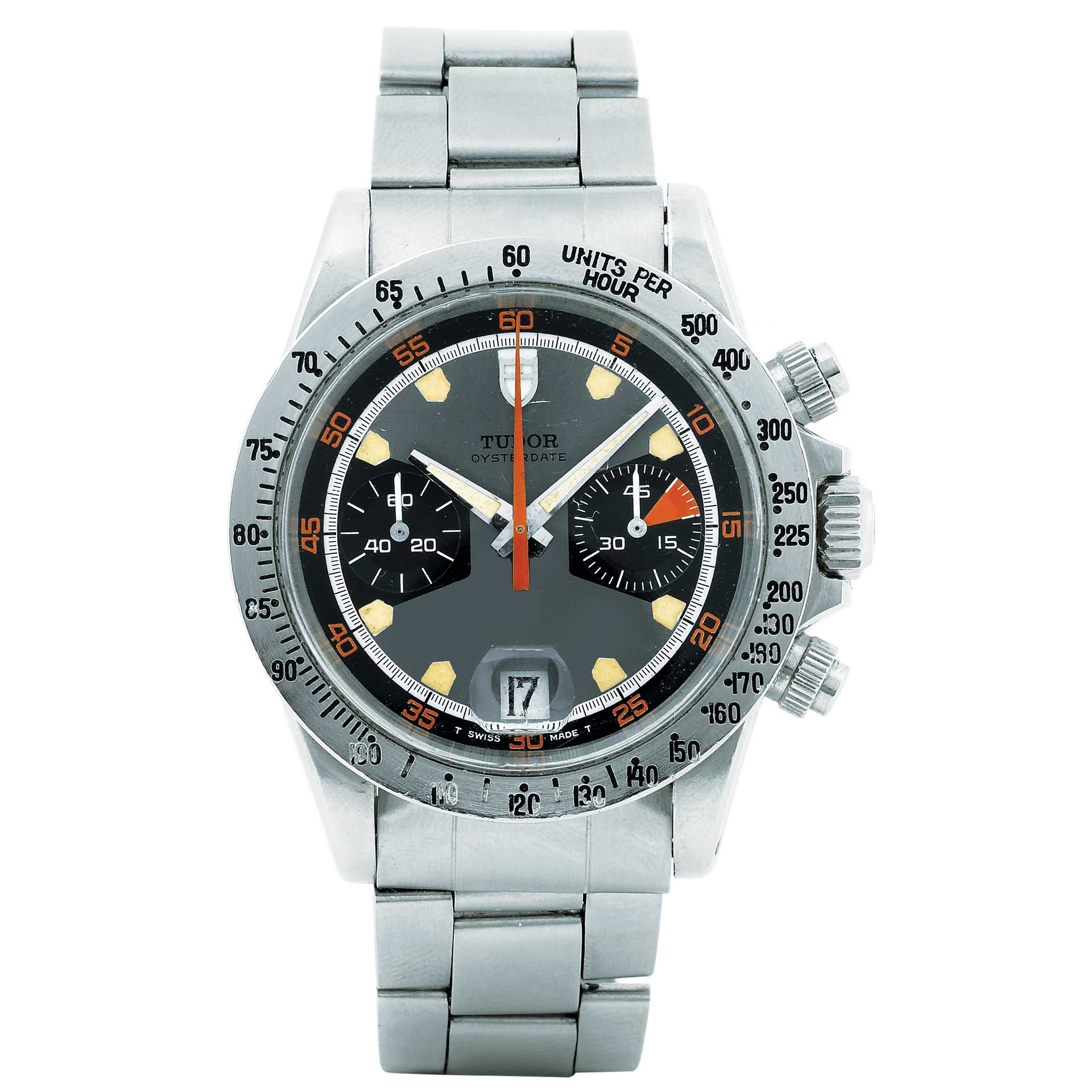 The first Big Block watches were the 9400 series, which ran until approximately the late-1980s. During this time there were three different references that were solely distinguished by three different bezel variations: the ref. 9420 with Bakelite tachymeter, the ref. 9421 with 12-hour calibrated bi-directional bezel and the ref. 9430 with steel tachymeter scale bezel. All vintage Tudor chronographs featured a date and the legend “Oysterdate” appeared on all the dials going back to the Homeplate watches of 1970. The third series chronos were also Oysterdates, but very early dials had the words “Chrono Time” or “Automatic Chrono Time” in an arc over the bottom chrono register. 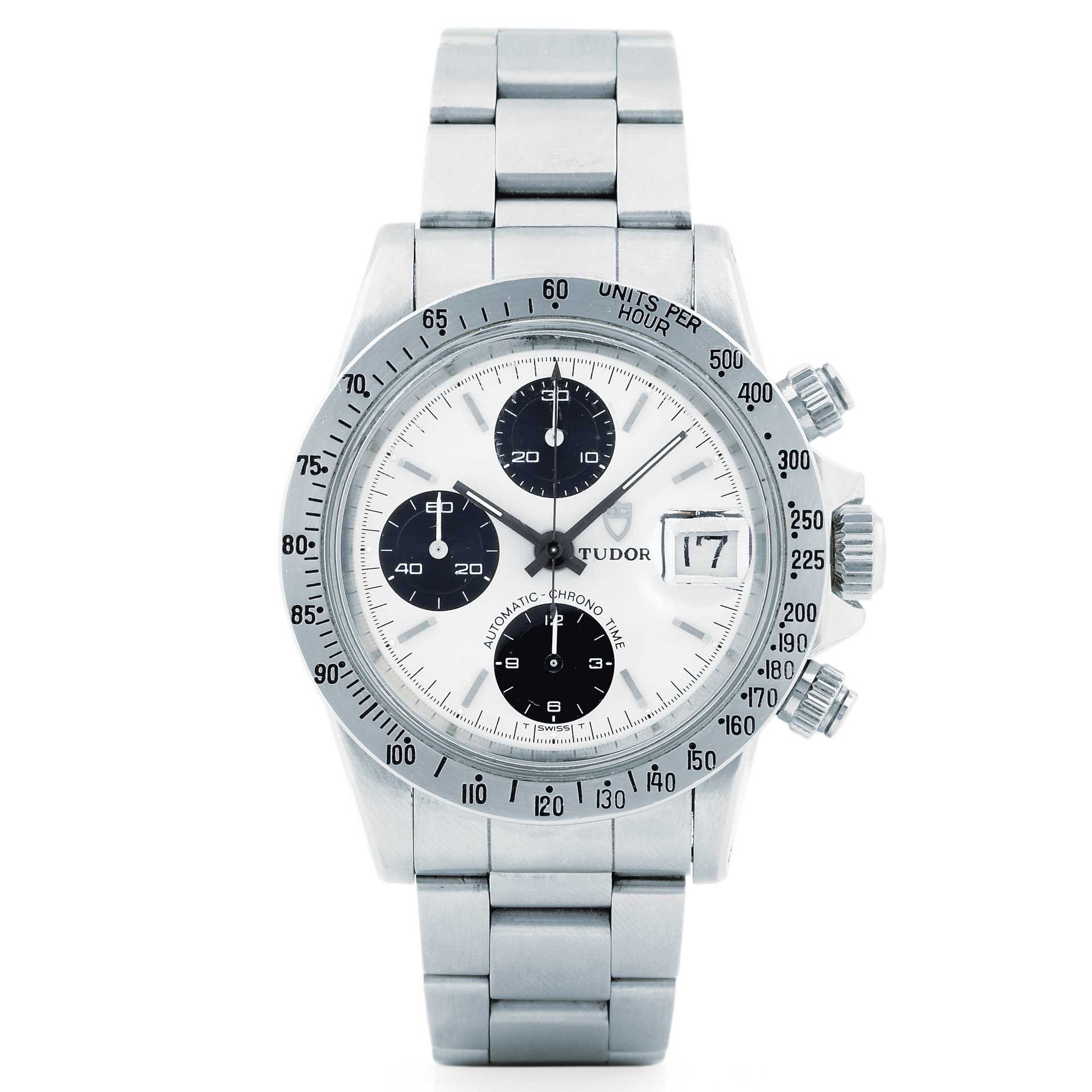 These watches are now very rare and are sought after by collectors, especially the blue ref. 9420. The dials with applied metal hour markers were only produced in black, which featured white sub-dials and orange numbers on the outer minute track. This dial was only featured in two references – the 9420 (with a black plastic tachymeter bezel) and the 9430 (with stainless steel tachymeter bezel). 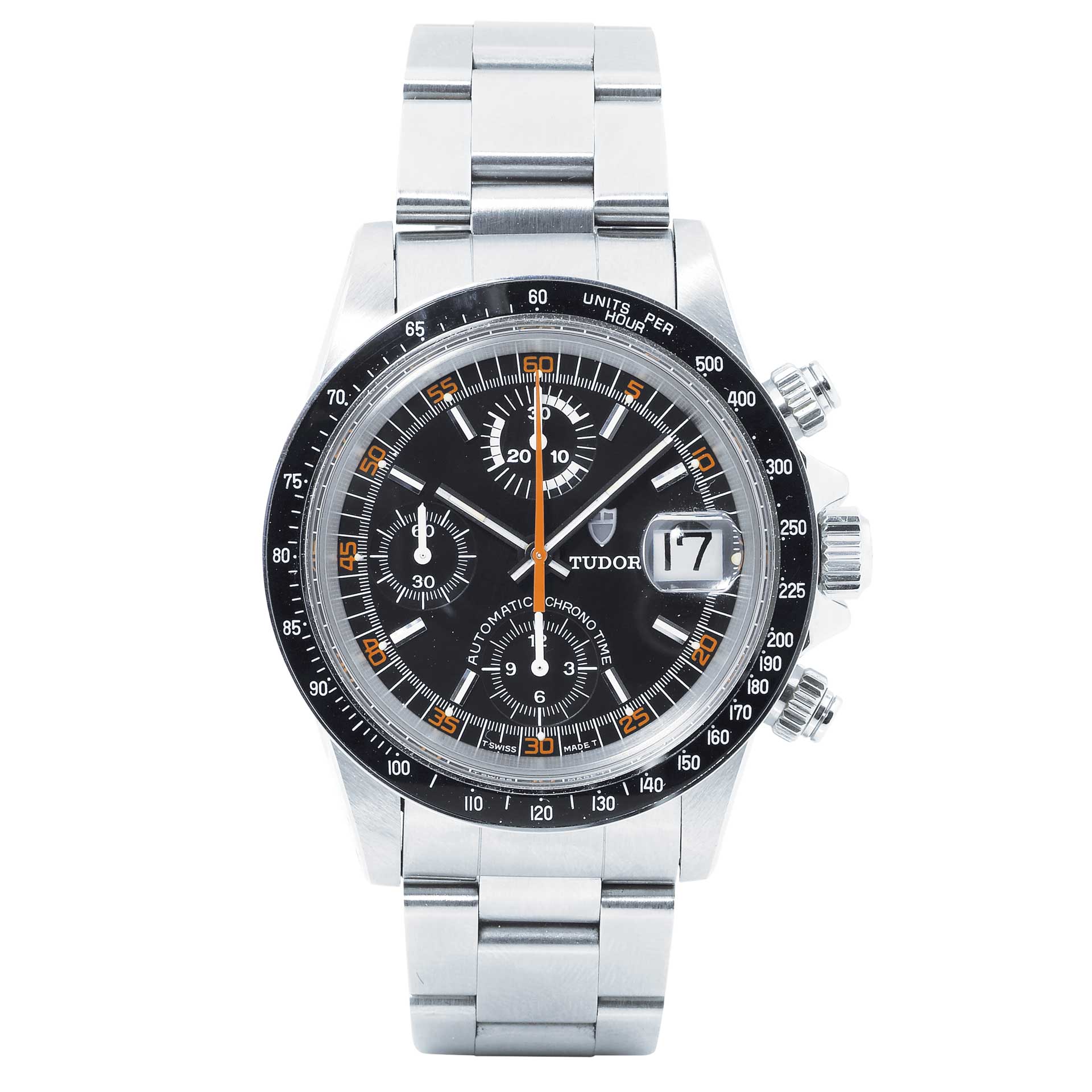 The relationship between Tudor and Rolex is a key part of both brands’ history, but particularly Tudor’s. Vintage Tudor watches utilised a great number of Rolex components, including winding crowns, chronograph pushers, bezels, bracelets and crystals. The introduction of the Big Blocks also heralded the arrival of a more understated two-colour Daytona-esque dial. Like its Rolex cousin, the most commonly seen versions were either black with silver/white sub-dials or the opposite way round. There was also a rare variant that had a silver dial with white sub-dials – the “Albino”. These dials all featured applied metal hour markers, with bevelled/sloping ends. The date aperture had a painted window around it and the chrono registers had a raised inner section that gave the dial an almost three-dimensional quality. 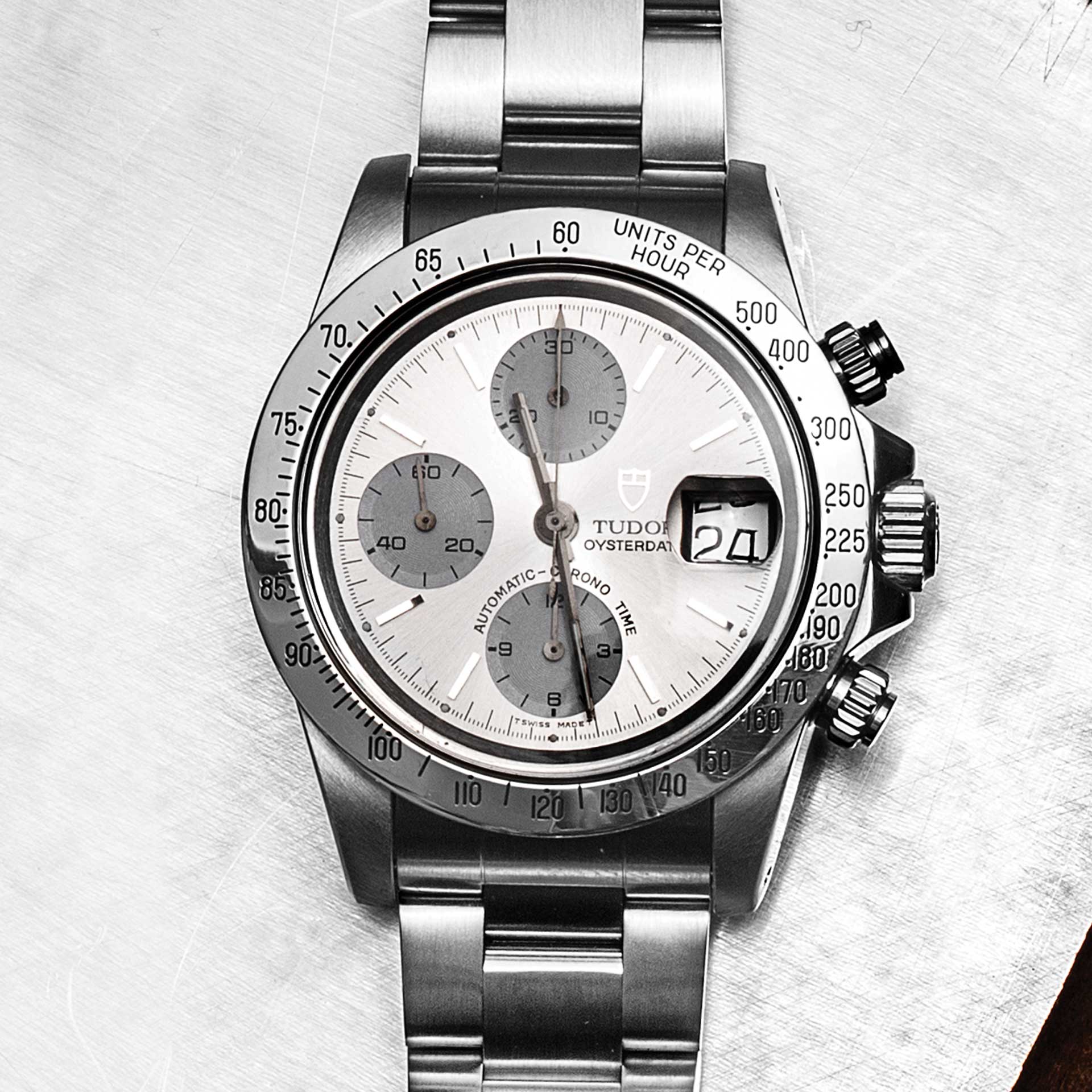 In the late 1980s, Tudor replaced the 94300 series watches with the 79100 series. These watches retained the successful Big Block case; however, they were only available with the two-colour, non-exotic dial configuration. As with the 9400 series, there were three references that were all differentiated by their bezel type: the 79160 featured a black plastic tachymeter bezel, the 79170 had a black, graduated 12-hour bi-directional bezel and the 79180 had a steel tachymeter bezel.

By the time the 79100 Big Block series was released, the dials all featured “Oysterdate” under the date window and “Automatic – Chrono Time” above the bottom chronograph register. Later 79100 series dials had straight (non-sloping) applied hour markers and the painted window around the date
aperture disappeared.

It would seem, however, that Tudor had not given up on the idea of using striking colours on the dials. Recently, a number of prototype dials have been discovered for the 79100 series watches. All these dials are silver with eye-catching sub dial colours such as blue, orange, pink
and green. 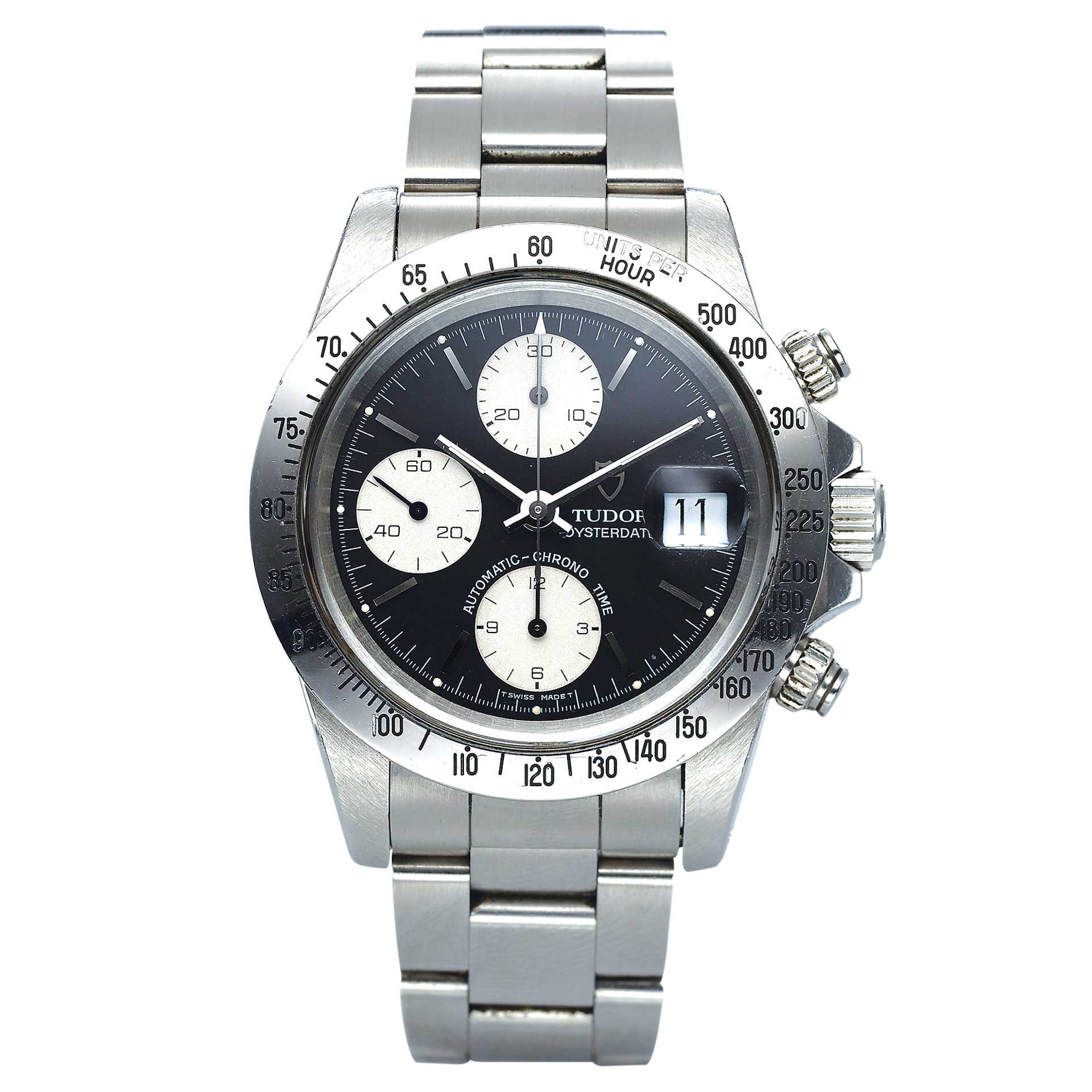 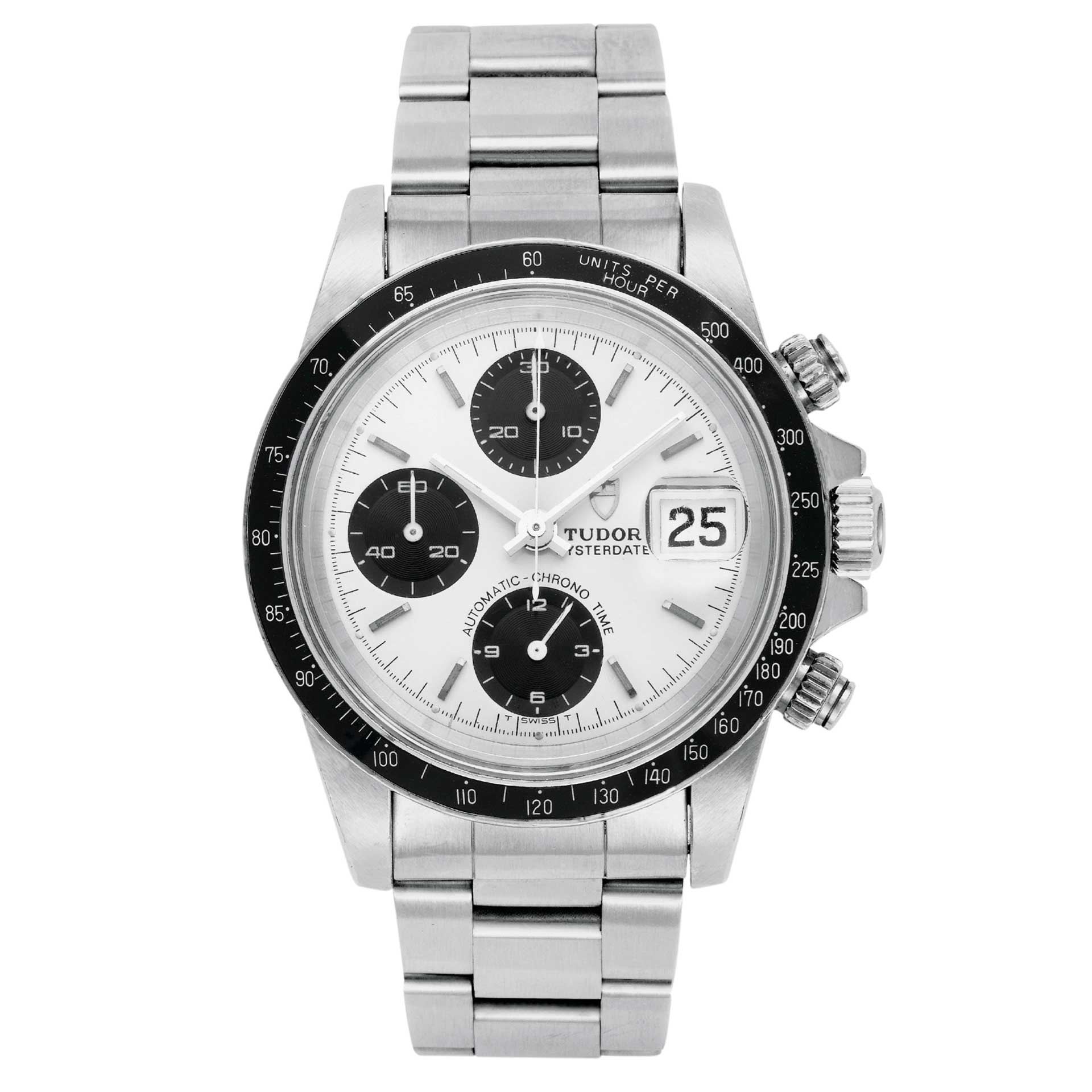 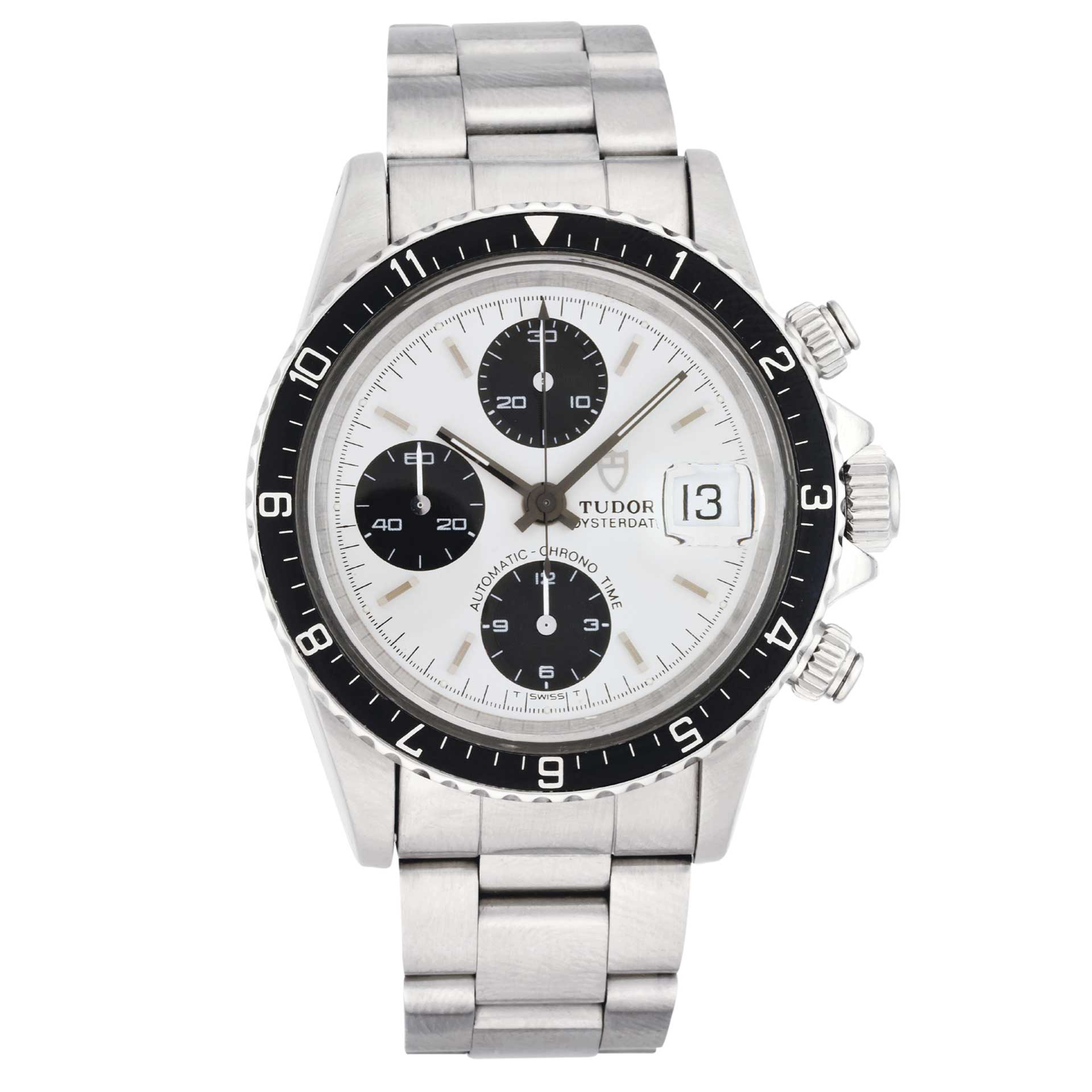 In a collecting world where “plexy-era” Rolex and Tudor watches are highly coveted, the Big Block offers collectors an opportunity to own an Oyster chronograph at a very reasonable price point. In comparison, the plastic glass vintage Daytonas are actually quite diminutive with a 36mm case and 19mm lug width, against the 40mm/20mm Big Block. This gives the watch presence on the wrist that feels contemporary yet looks very classic in form. For a number of years now there has been a lot of interest in the earlier two-register chronos, which have attained “grail-watch” status amongst Rolex and Tudor collectors, especially the Homeplate chrono from 1970. In my view, the three register chronos are yet to really take off. They are an important chapter in the Tudor story as a demonstration of both Tudor’s freedom to play with more experimental design and also the first automatic chronograph out of the Rolex camp.

Both the Homeplate and Monte Carlo two-register chronograph watches have been reinterpreted as part of Tudor’s Heritage line. The 2010 debut watch in the Heritage line was the Homeplate chrono, which was followed in 2013 by the blue Monte Carlo. Interestingly, the cases of both watches bear a striking resemblance to the vintage Big Block case – so it only makes sense that a three-register watch could be in the pipeline. I once asked ex-Creative Director Davide Cerrato over dinner if Tudor would ever consider a Heritage Big Block. He just looked at me, smiled, gave me a high-five, declaring: “Why not!” I personally can’t wait. 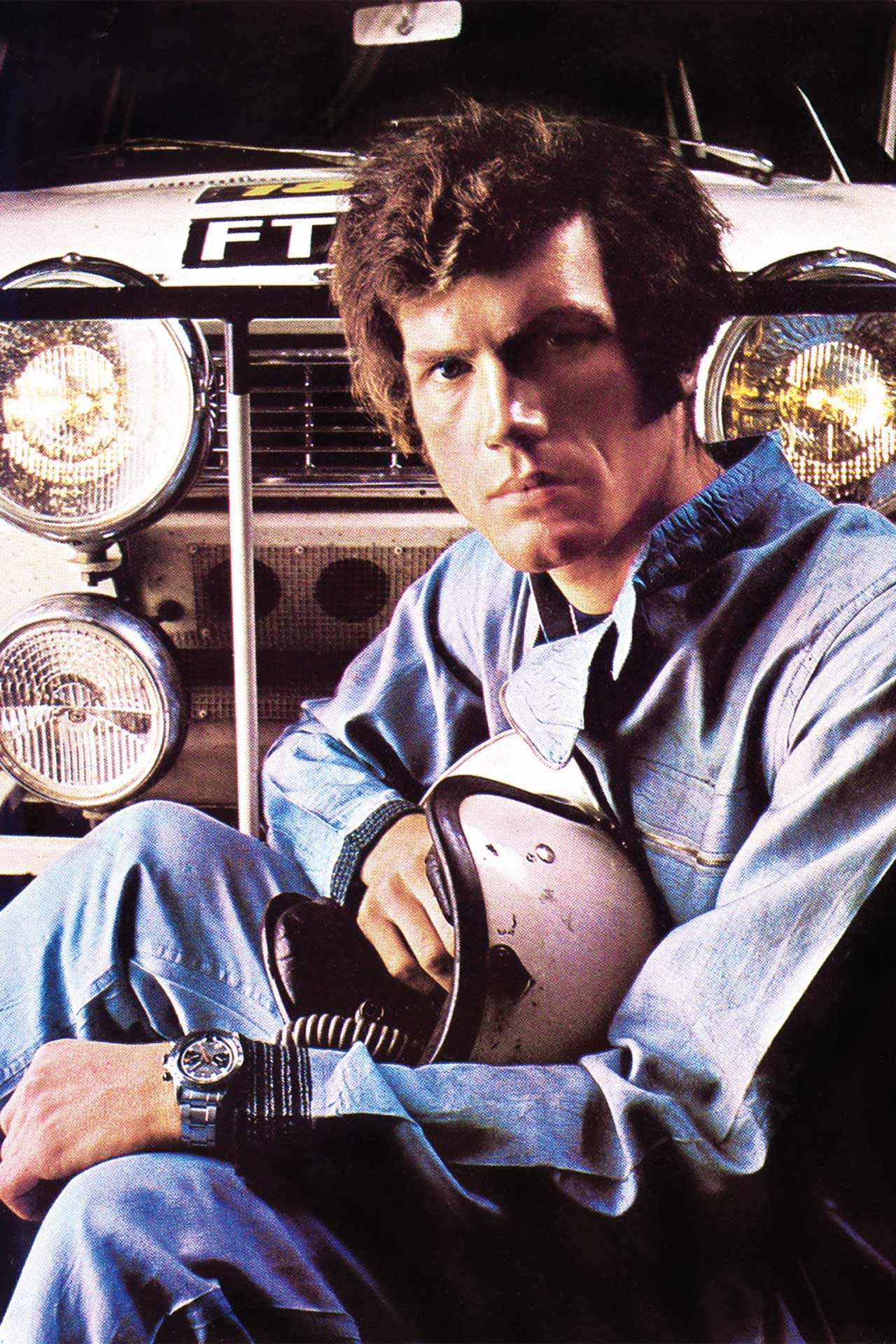 1) The Big Block references are only differentiated by the bezel type. The rarest is the Bakelite bezel, as they are reasonably easy to damage and so it’s not unusual to see watches that have had the bezel switched. Authorised dealers would also change them for loyal customers. Collectors will always want the correct bezel for the reference, so when buying one make sure you check the reference number between the lugs.

2) There are a lot of counterfeit exotic Monte Carlo dials on regular Big Blocks, to try and make the watch more valuable. Always do your homework and research to make sure you are informed before spending a lot of money on a problem watch. The best advice is always: “Buy the seller, not the watch.” Dealers may charge a premium, but you are paying for their expertise and your own peace of mind. 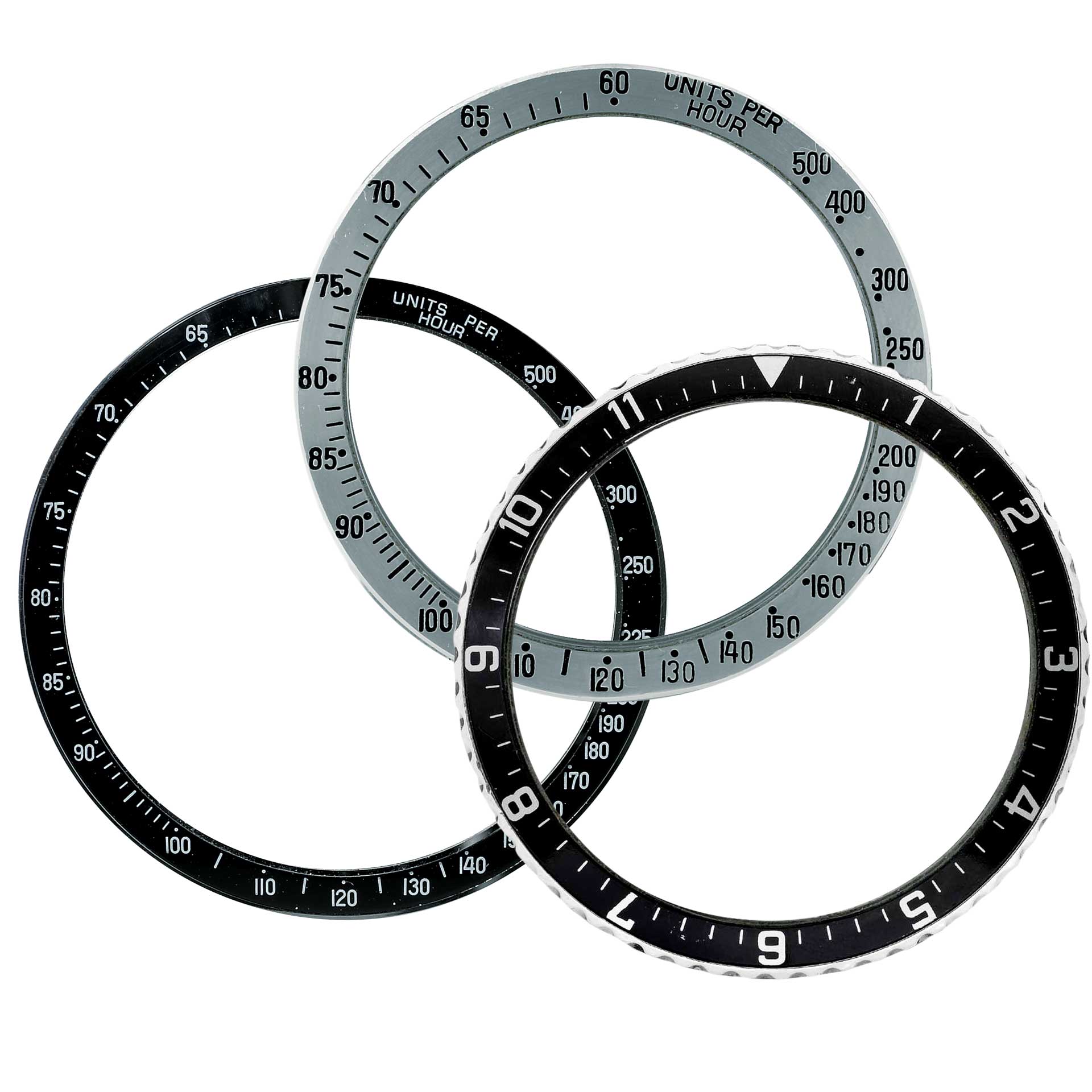